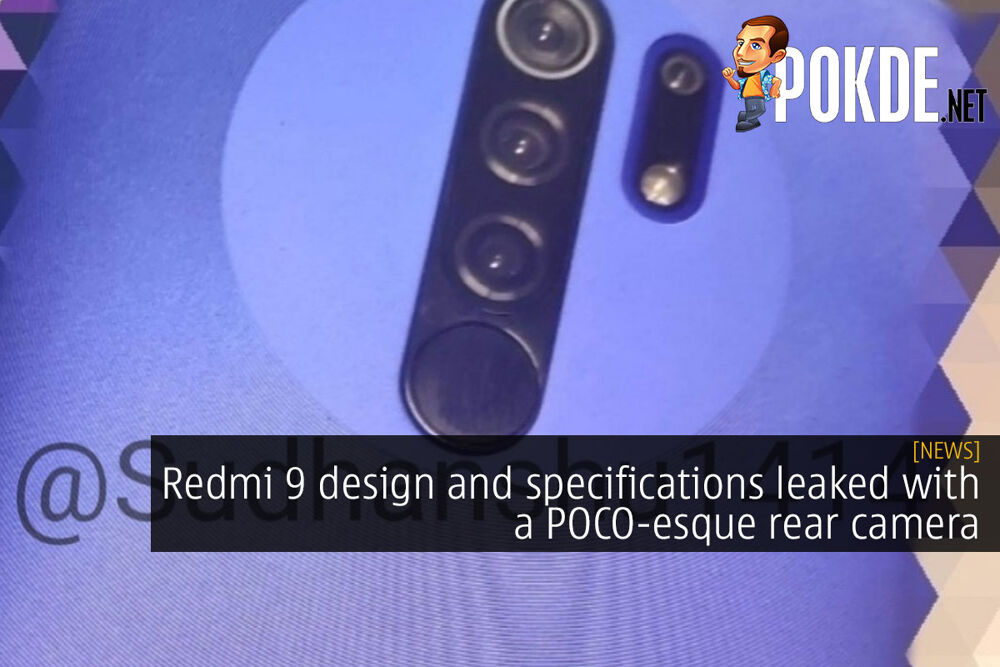 What might have been the Redmi 9 was previously spotted on Geekbench as the Xiaomi Merlin with a MediaTek Helio G80 under the hood, but this latest leak lends more credence to it. Actually, a lot more, considering that the Redmi Note 9S has already been announced globally and it does not pack a Helio G80.

Do take the leak with a a pinch of salt though, as you would with all leaks. @Sudhanshu Ambhore shared a leak which he claims was gotten from a Chinese source shows the rear camera design of the Redmi 9. I must say it looks extremely good for what should be a lower-mid-range device, as it takes a page out of the Redmi K30‘s (or the POCO X2?) book. The fingerprint sensor’s position gave off some POCOPHONE F1 vibes, but that might just be me.

The quad camera here is reportedly going to consist of a main 13MP camera, an 8MP ultra-wide angle camera, a 5MP macro camera and a 2MP depth sensor. Specifications wise it has what it takes to compete against the competition, as most of its camera hardware seems to be lifted from the Redmi Note 9S’, except for the main camera. Once again, megapixel count isn’t everything, so we will reserve our judgement for later.

The Redmi 7 and Redmi 8 were launched with around 6 months between them, so the Redmi 9 is a little behind on its schedule. With the COVID-19 outbreak, that’s somewhat expected, although China seems to be recovering already, so perhaps we will see the Redmi 9 sooner rather than later.

Pokdepinion: If the Redmi 9 comes to Malaysia in the Redmi 8’s price range, I do believe it will annihilate the competition like the Redmi Note 9S too.

Sony Xperia 1 II can run on USB power without charging its battery
PokdePicks:Celebrate Raya with Your Loved Ones with 50% Off Your 1st Celcom Home Wireless Bill
PokdeLIVE 59 — ASUS ExpertBook B9!
This is how Intel® makes classrooms smarter
Trump signs executive order after Twitter adds fact-checking links to his tweets
Latest Reviews
Read More
1876