#Pokdepicks 5 Awesome Games to Look Out for in July 2019 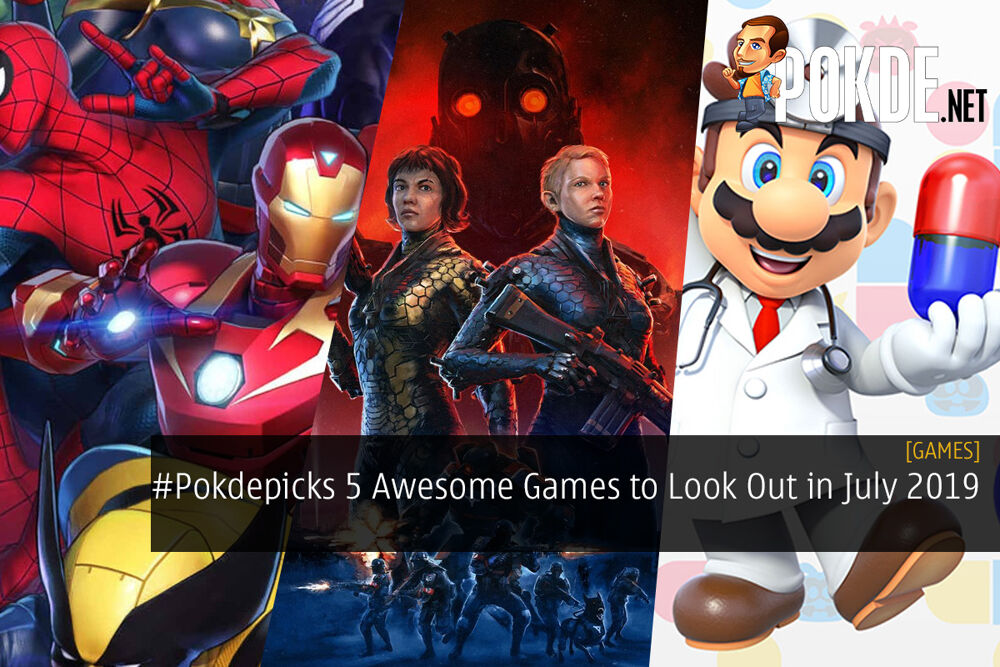 #Pokdepicks 5 Awesome Games to Look Out for in July 2019

It’s no secret that Nintendo has dived into the mobile games market, especially with the previously launched Super Mario Run. Now, it appears that the second Mario mobile game is coming soon with an emphasis on puzzles, and it’s called Dr. Mario World. Just like the previous Dr. Mario games, it will have a similar style of gameplay as the legendary Tetris.

The player’s objective is to eliminate all of the viruses on the screen by connecting Megavitamins of the same color to each of them, although instead of the Megavitamins descending, the game’s gravity is directed upwards with the viruses positioned towards the top of the screen. Levels are grouped into worlds with their own unique theme, and there will be five available at launch.

Fun fact, Dr. Mario World is expected to be a viable mobile game in the long run. While there will only be five worlds in the beginning, more worlds will be added in the future for gamers to enjoy. The best part of all is that this game is free for anyone to enjoy, but it will have some form of microtransaction which isn’t mandatory to play the game.

Dr. Mario World will be coming to both Android and iOS on 10th July 2019 as a free mobile game with in-app purchases.

Developed by the same team behind the Ninja Gaiden series, Marvel Ultimate Alliance 3: The Black Order is an action role-playing game with some elements from hack and slash games. Gamers will have to assemble a team to prevent galactic devastation at the hands of the mad cosmic tyrant Thanos and his ruthless warmasters, The Black Order.

There will be a number of playable characters, most of which are heavily inspired by their Marvel Cinematic Universe counterparts. The roster includes several members of the Avengers, the Guardians of the Galaxy, the Inhumans, the Marvel Knights, the Spider-Verse, the Midnight Sons, the Defenders, and X-Men.

Fun fact, while previous entries in the Marvel Ultimate Alliance series was made available for a variety of platforms, Marvel Ultimate Alliance 3: The Black Order is the first to be exclusive to a single platform. This is because Nintendo serves as the producer and publisher of the game. As such, the game will be set in an entirely different universe from the previous games.

Marvel Ultimate Alliance 3: The Black Order will be coming exclusively to the Nintendo Switch on 19th July 2019.

Yet another entry in the Wolfenstein series of shooting games, Wolfenstein: Youngblood is a first-person shooter set in the 1980s. The game takes place roughly two decades after the events of Wolfenstein II: The New Colossus in an alternate reality where Nazi Germany won the Second World War.

The twin daughters of B.J. Blazkowicz, Jessica and Sophia Blazkowicz, must travel to Paris to look for their missing father. At the same time, they have to help the French Resistance liberate the country from Nazi occupation since the events of World War II. Their journey will not be an easy one, and it will be one they will never forget.

Fun fact, developers MachineGames and Arkane Studios wanted to give gamers a fresher experience when playing Wolfenstein: Youngblood. As such, gamers are given more freedom in how they approach the game as missions can be completed in a non-linear fashion. There will also be new equipment and abilities to incentivize gamers to progress further through the game.

Wolfenstein: Youngblood will be coming to the PlayStation 4, Xbox One, Nintendo Switch and PC on 26th July 2019.

An indie game published under the EA Originals label, Sea of Solitude is an adventure game set in a fictional underwater city. The game follows a mysterious woman named Kay who finds herself in an abandoned, submerged city where nothing is what it seems to be. Things become even more bizarre when Kay discovers that she has somehow turned into a monster.

With what’s left of her sanity, she ventures forth to discover the truth behind her condition and why she is in the city. Her only clue is the scaly, red-eyed creatures which appear to be lurking in the submerged city.

Fun fact, the protagonist of Sea of Solitude is modelled after the game’s creative director, Cornelia Geppert. The game is said to be her most personal and artistic project thus far as the narrative has some inspirations from her real-life events such as probing her fears and emotions after a bad breakup in 2013. The game is part of the industry’s trend in tackling mental health issues.

Sea of Solitude will be coming to the PlayStation 4, Xbox One, and PC on 5th July 2019.

The latest entry in the long-running first party Nintendo series, Fire Emblem: Three Houses is a role-playing game with an emphasis on tactical combat. The game is set on the continent of Fódlan, where the landmass is divided into three rival nations at peace; the Adrestian Empire, the Holy Kingdom of Faerghus, and the Leicester Alliance.

At the center of the continent is the Garegg Mach monastery, home of the Church of Seiros and its Officer’s Academy. The protagonist is offered a job teaching at the academy to tutor the heir of the three nations; Edelgard, Dimitri, and Claude. Their lives take a huge turn when the protagonist notices the existence of Sothis, a mysterious girl that only the heirs are able to see.

Fun fact, the protagonist in Fire Emblem: Three Houses is generally referred in a very neutral manner as the gamers can decide whether to choose a male or female character as their protagonist. While gamers are also free to name the protagonist anything they please, the default name is “Byleth”, which is the name that Nintendo will use for future references to the game.

Fire Emblem: Three Houses will be coming exclusively to the Nintendo Switch on 26th July 2019.

If you missed out on last month’s one, click right here. For more awesome games, stay tuned to Pokde.net.

Aiman Maulana
Jack of all trades, master of none, but oftentimes better than a master of one. YouTuber, video editor, tech head, and a wizard of gaming. What's up? :)
Pokde Recommends
AndroidconsoleGaminghighlightsiosMalaysiamobile gamenintendo switchAndroidBlogGamingiOSMicrosoftMobileNintendoPCMR
MORE
Read More
907

Galileo satellites were non-functional since Friday
Next