#Pokdepicks 5 Awesome Games to Look Out for in March 2020 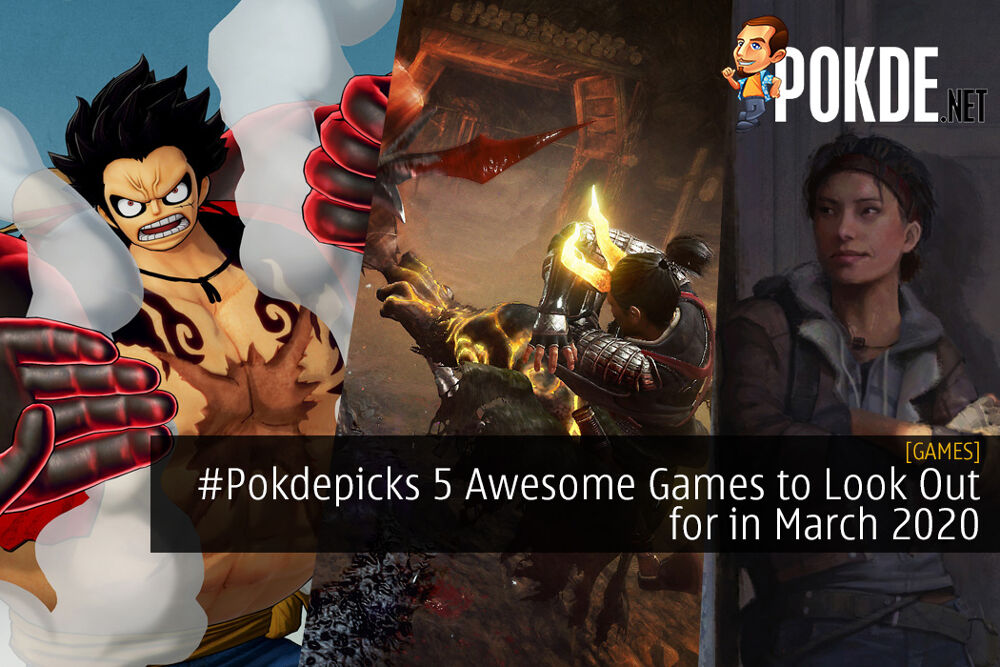 The sequel to the rage-inducing PS4-exclusive Nioh, Nioh 2 is an action role-playing game developed by Team Ninja. While not much is known about the game, it is a standalone story separate from the previous game and is set in the 1500s in fictional feudal Japan with a focus on historical warlord Toyotomi Hideyoshi.

Players can create their own playable character known as a “yokai spirit” with the ability to equip a wide variety of weapons including the katana and chained scythe. As the game progresses, you will unlock new skills but with the use of Soul Cores, you can make use of special abilities and transform into a full-fledged “yokai” demon.

Fun fact, you don’t actually have to play Nioh 2 alone. The game will allow you to summon two AI-controlled avatars that will fight by your side. Moreover, there is a cooperative multiplayer mode where you can play with up to three players. Whether that is the ability to make the game easier or if the game will scale up to be even harder is unknown at this time.

Nioh 2 will be coming exclusively to the PlayStation 4 on 13th March 2020.

The return of the popular Dynasty Warriors-style franchise after a long hiatus, One Piece: Pirate Warriors 4 is a hack and slash action game based on the popular Japanese anime and manga, One Piece. The game will recreate the Whole Cake Island arc featuring the battle against Yonkou Big Mom and her son, Charlotte Katakuri, as well as its own, original iteration of the Wano arc.

The game boasts over 40 playable characters and is expected to play similarly to previous games. It will however have a new game mode called “Titan Mode”, which will focus more on strategic gameplay as opposed to its usual action-oriented gameplay. There will also be a bigger variety of multiplayer game modes to enjoy.

Fun fact, One Piece: Pirate Warriors 4 opted for an original storyline with regards to the Wano arc because it is still ongoing in the manga series. As such, it may include some elements from the actual storyline but it is expected to play out differently from the actual story for this arc, especially the battle against the antagonist, Kaidou the Beast.

One Piece: Pirate Warriors 4 will be coming to the PlayStation 4, Xbox One, Nintendo Switch and PC on 27th March 2020.

If you missed out on last month’s picks, click right here.

Ori and the Will of the Wisps

The sequel to the highly-successful indie game Ori and the Blind Forest, Ori and the Will of the Wisps is a Metroidvania-style platformer with adventure elements. Players once again take control of the white guardian spirit, Ori, in a brand new adventure to discover the world beyond the forst of Nibel. One fine day, a fateful flight puts the owlet Ku in danger.

Ori will need more than just bravery to bring the family back together, restore the broken land of Niwen, and unearth his true destiny. One of the major changes to the game is the new shard system akin to Hollow Knight to upgrade skills instead of the sequential upgrade system from the previous game. It will also be more convenient as players will rely on autosaving instead of soul links.

Fun fact, Ori and the Will of the Wisps is currently exclusive to the Microsoft platform due to a development and distribution deal between developer Moon Studios and Microsoft Game Studios. Like its predecessor however, it’s not necessarily a permanent exclusive as it may still make its way to other platforms, albeit much later.

Ori and the Will of the Wisps will be coming to the Xbox One and PC on 11th March 2020.

The sequel to one of the oldest franchises in videogame history, Doom Eternal is a first-person shooter developer by id Software. The game takes place 2 years after the 2016 Doom game, where Earth is overrun by demonic forces. Players reprise the role of the Doom Slayer, the ancient warrior who battle the demonic forces in order to save the Earth from destruction.

The game continues its predecessor’s emphasis on “push-forward” combat, encouraging the player to aggressively engage enemies in order to acquire health, ammo and armour. The player has access to a wide variety of weapons, both ranged and melee. There will be new moving elements including wall-climbing, dash moves, and swinging horizontal bars in this entry.

Fun fact, the multiplayer portion of Doom Eternal is developed in-house instead of being outsourced to Certain Affinity like its predecessor. The reason for this is that the developers want to create an experience that is more social and connected to the single player campaign. As such, it was deemed that outsourcing the work may prove detrimental to the goal.

Doom Eternal will be coming to the PlayStation 4, Xbox One, PC, and Google Stadia on 20th March 2020.

One of the most controversial game announcements to be made, Half-Life: Alyx is a first-person shooter that utilizes VR technology. The game is set before the return of Gordon Freeman in Half-Life 2. Players take on the role of Gordon Freeman’s ally, Alyx Vance, as she and her father Eli Vance fight the Combine, an alien empire that has conquered Earth.

While the game is a prequel to Half-Life 2, it is not considered a side story. Game Designer David Speyrer described the game as the “next part of the Half-Life story” and confirmed that it will be a full game with the same length as Half-Life 2 instead of being released in an episodic format. You can play the game using any and all PC-compatible VR headsets.

Fun fact, while the announcement for Half-Life: Alyx have reached millions of gamers, many were disappointed because it’s not actually Half-Life 3 and that the game needs to be played in VR. Developer Valve has no plans on making a non-VR version of the game, which may spell trouble as the technology is still very expensive for average consumers.

Half-Life: Alyx will be coming exclusively to PC via Steam on 23rd March 2020.

If you missed on our picks for last month’s games, click right here.

Aiman Maulana
Jack of all trades, master of none, but oftentimes better than a master of one. YouTuber, video editor, tech head, and a wizard of gaming. What's up? :)
Pokde Recommends
consoleEpic Games StoreGamingGoogle StadiaMalaysianintendo switchPCMRPS4BlogGamingMicrosoftNintendoPCMRPS 4SonySwitch
MORE
Read More
8177

Apple Fined $1.2B For Price Controlling
Next