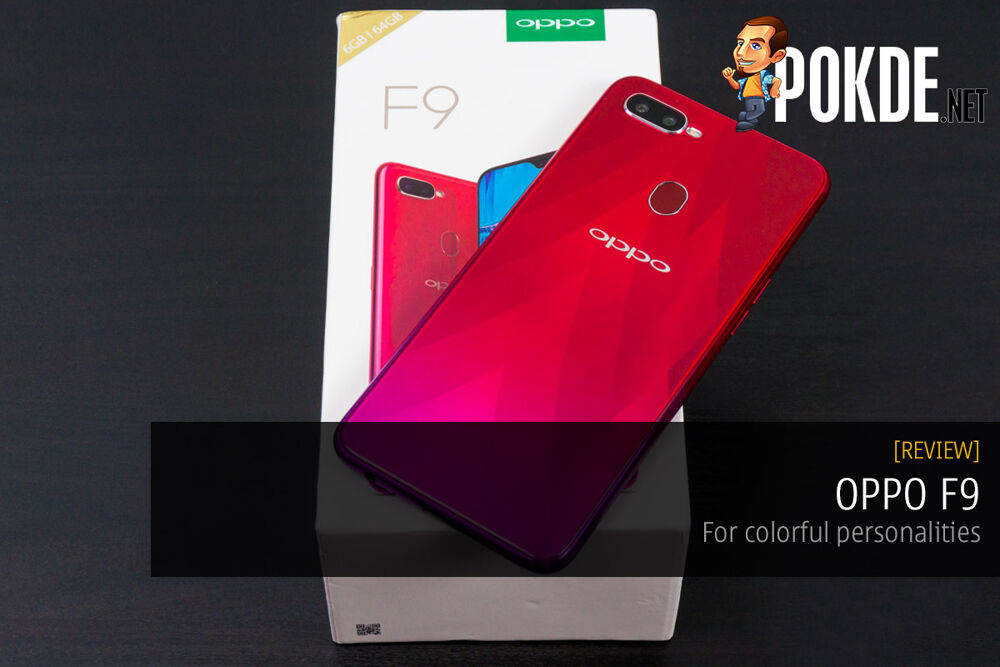 + 20W VOOC Flash Charger is included in the box
+ Great looking gradient and pattern on the back
+ Good performance across the board
+ Dedicated dual SIM support with separate microSD slot
+ Waterdrop notch is a good improvement!
+ ColorOS 5.2 is okay to use; Smart Bar is an interesting feature
+ Decent camera

Extremely pretty to behold, but might be a bit too fragile with that glossy plastic body.

We all hate notches. Let’s face it. Aside from the Apple fans, I believe all smartphone users do not enjoy having a notch at the top of their screen. But in most cases, it is out of necessity. Placing the camera at the bottom makes for horrible selfies, while motorized systems are most probably just unfeasible for more affordable mid-range devices. OPPO here has tried to shrink the notch. And hence we have the OPPO F9, with the newfangled waterdrop notch.

OPPO here packages their smartphones with everything you will ever need to use your OPPO F9 to the fullest. That means a VOOC charger, a case and even a pair of basic earphones. The OPPO F9 still uses a microUSB connector though, which somewhat sucks this far into 2018. 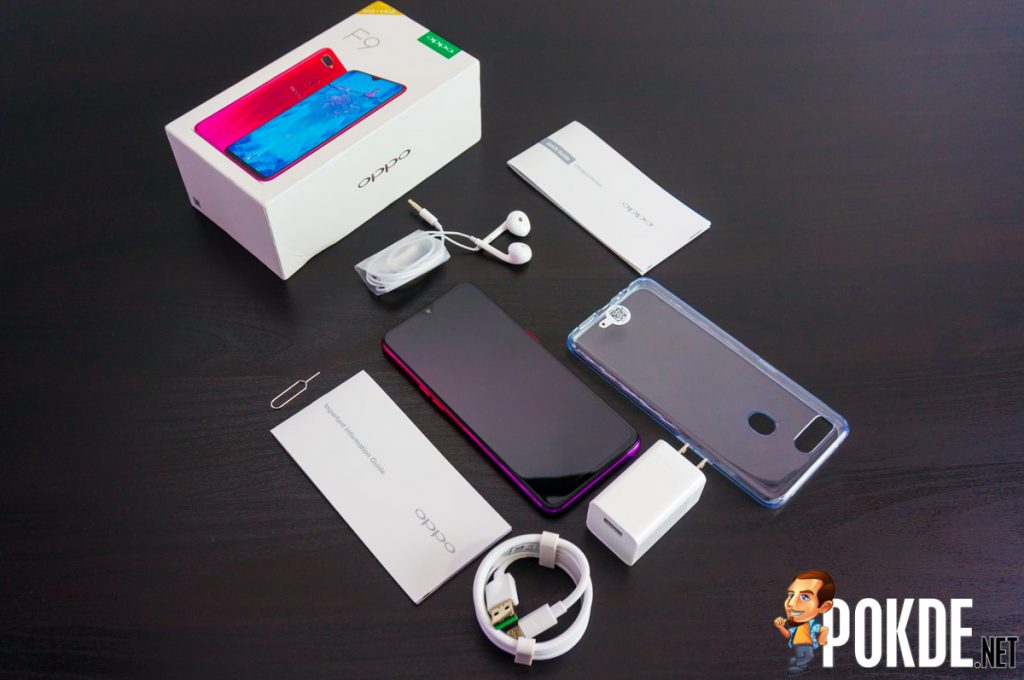 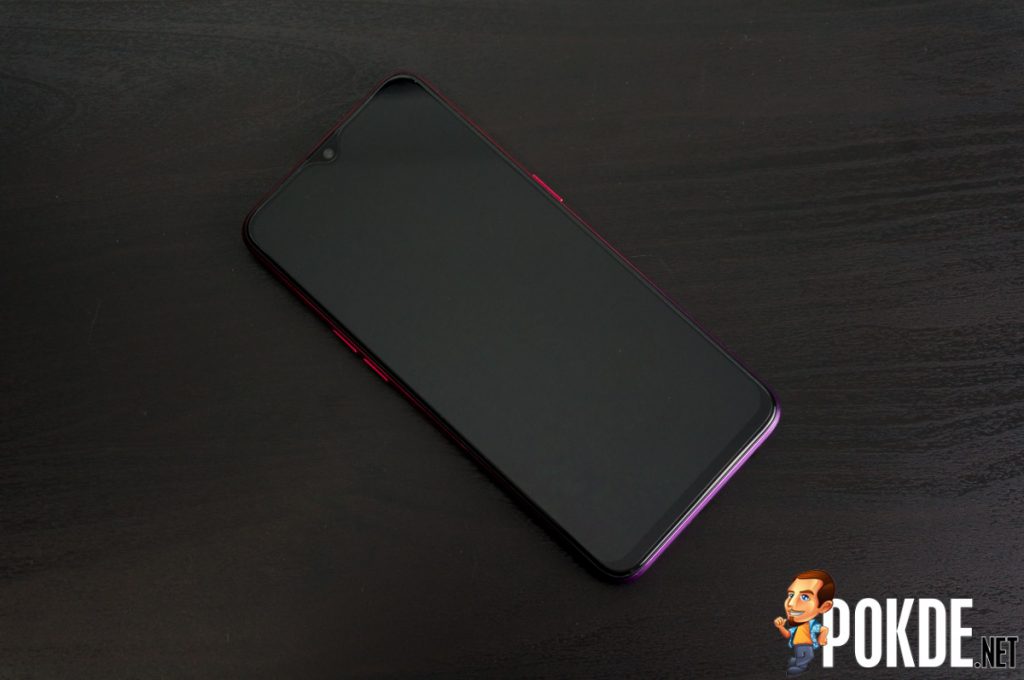 The front is devoid from any logos, and OPPO has even included a pre-installed screen protector. The notch is noticeably smaller with the centered camera right under the earpiece grille which is pushed all the way to the top edge, so the screen covers more of the device than in previous OPPO mid-range devices. 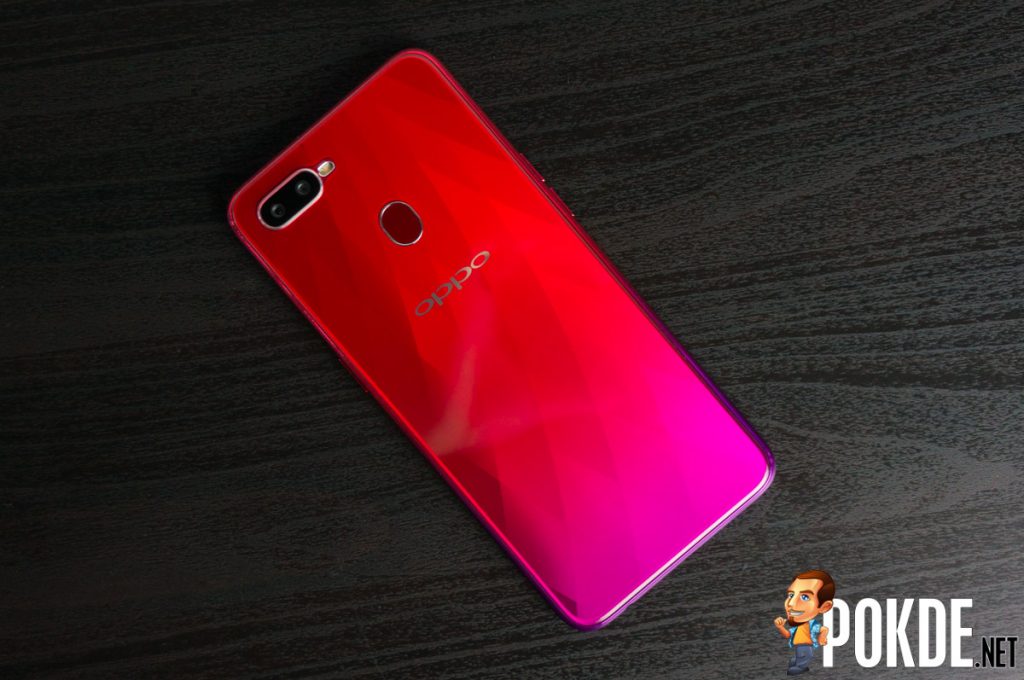 The back is stunning to behold with its petal-shaped pattern and also gradient color. There is no light play here though. The back is finish with the gradient, so there isn’t any kind of light diffraction going on here. It does look pretty cool though. 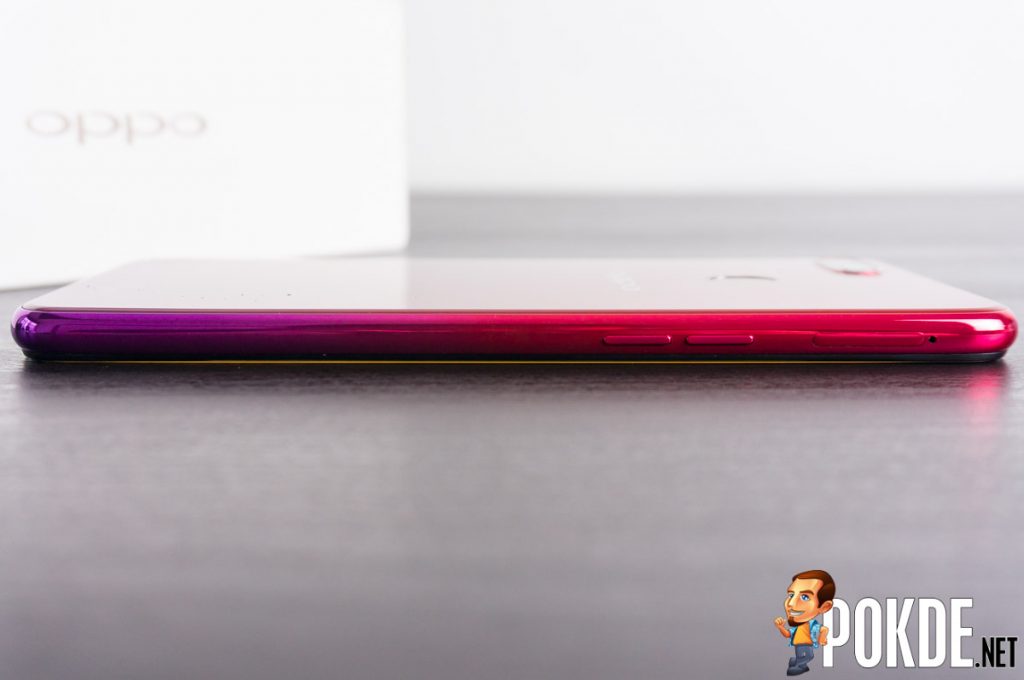 Here’s a better look at the gradient paintjob that OPPO used for the OPPO F9. It shifts from a deep red to a bright shade of purple, which is really quite attractive. If this isn’t your cup of tea, there is also Twilight Blue and the new Starry Purple finishes to choose from. The sides are made from glossy plastic too, which explains the lack of any antenna lines. The physical buttons are separated ala iPhone, with the volume rocker on the left side along with the SIM tray and the power button on the right. 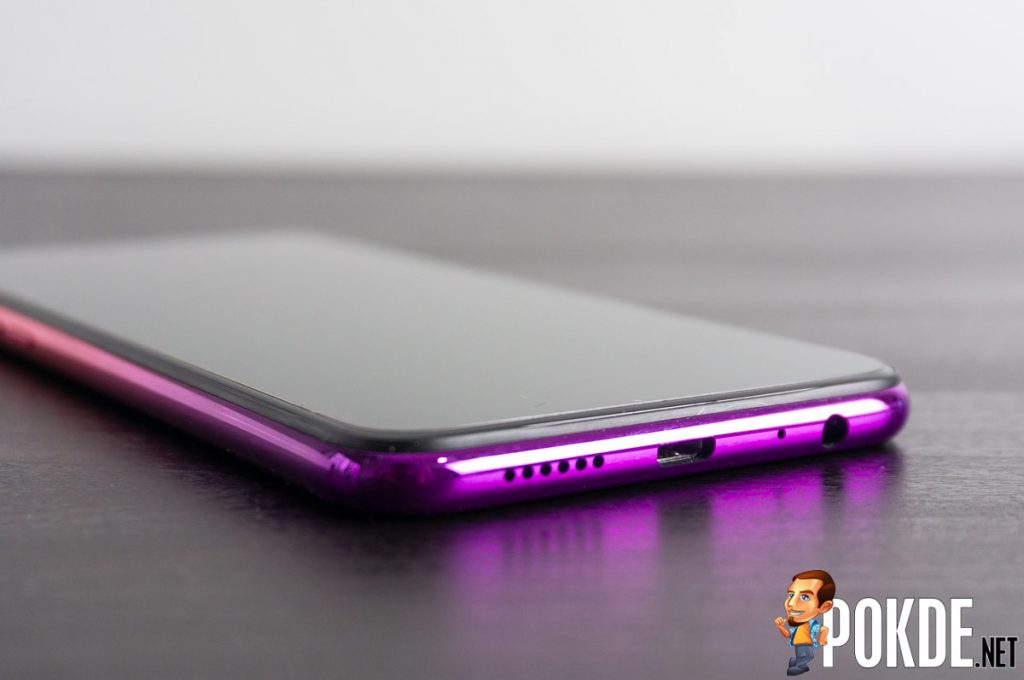 The bottom is home to the single loudspeaker, microUSB and 3.5mm jack. Luckily OPPO decided to retain the headphone jack here, as they did remove it from their flagship Find X. The microUSB port here is really disappointing though, and we hope the next F-series device will finally come with USB Type-C.

From a hardware perspective, this device is definitely one of the best mid-range smartphones from OPPO recently. It comes with AC WiFi, a pretty decent MediaTek chipset and also a respectable 3500 mAh battery. Pretty solid. There is no NFC, no wireless charging and no waterproofing at all, but given that this is a mid-range device, we aren’t even complaining. 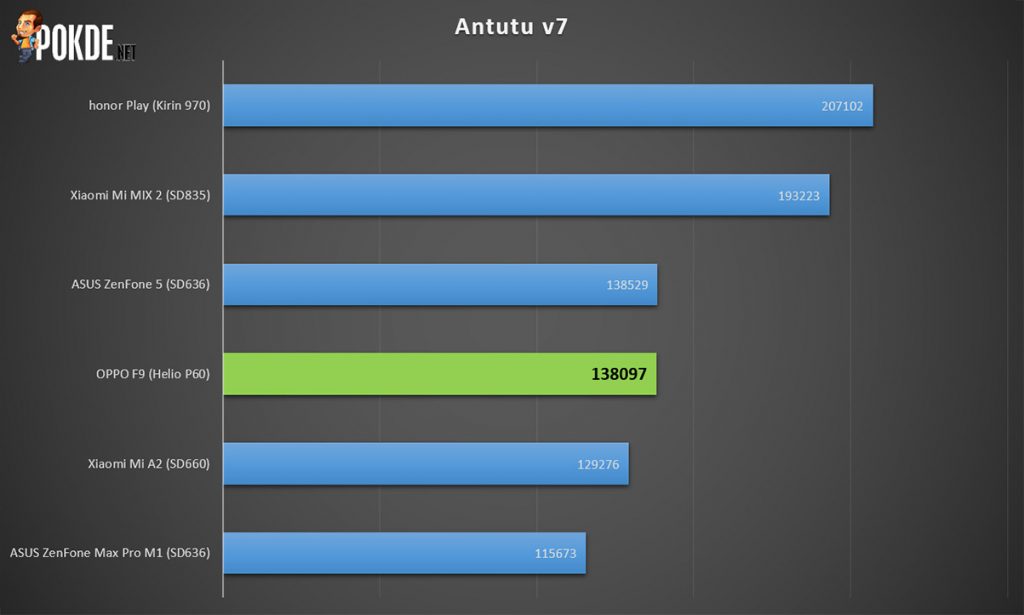 We are seeing it come up short of the ASUS ZenFone 5, which is cheaper than the OPPO F9. But the ZenFone 5 is more of an outlier than the norm for a Snapdragon 636, as it bests even the Snapdragon 660-powered Mi A2. 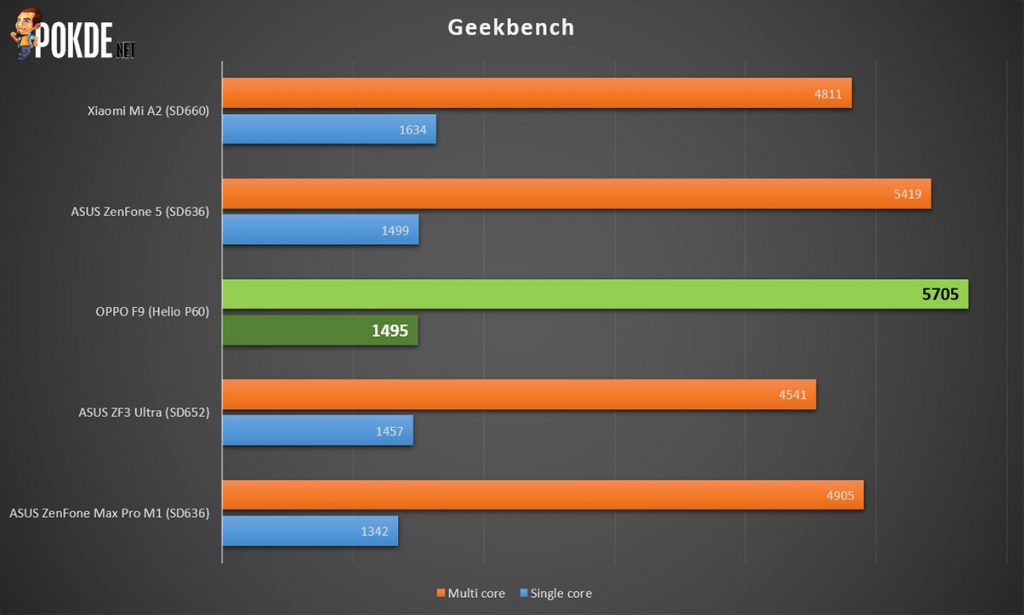 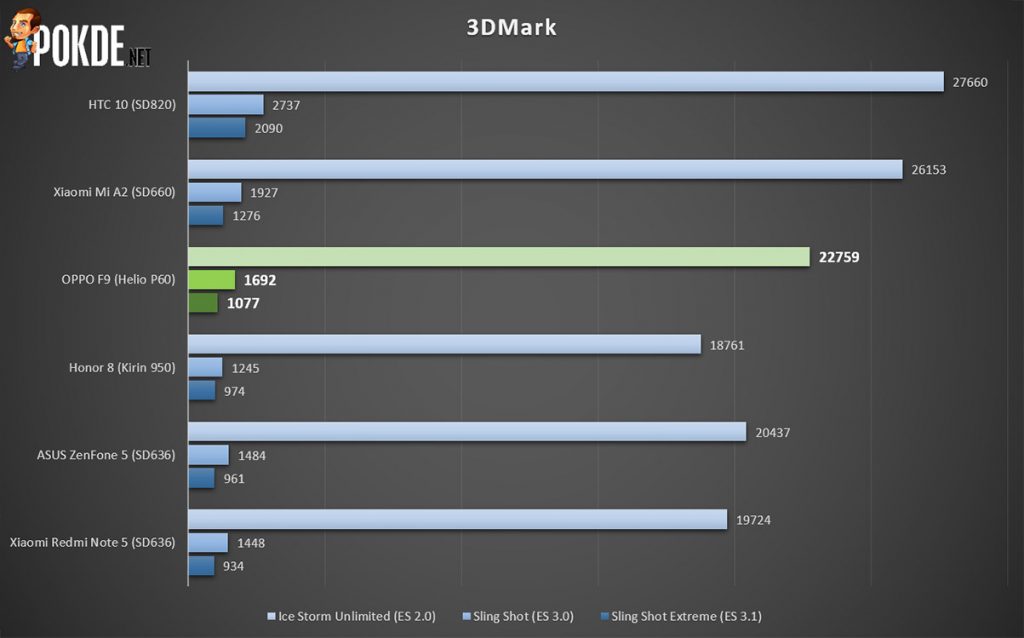 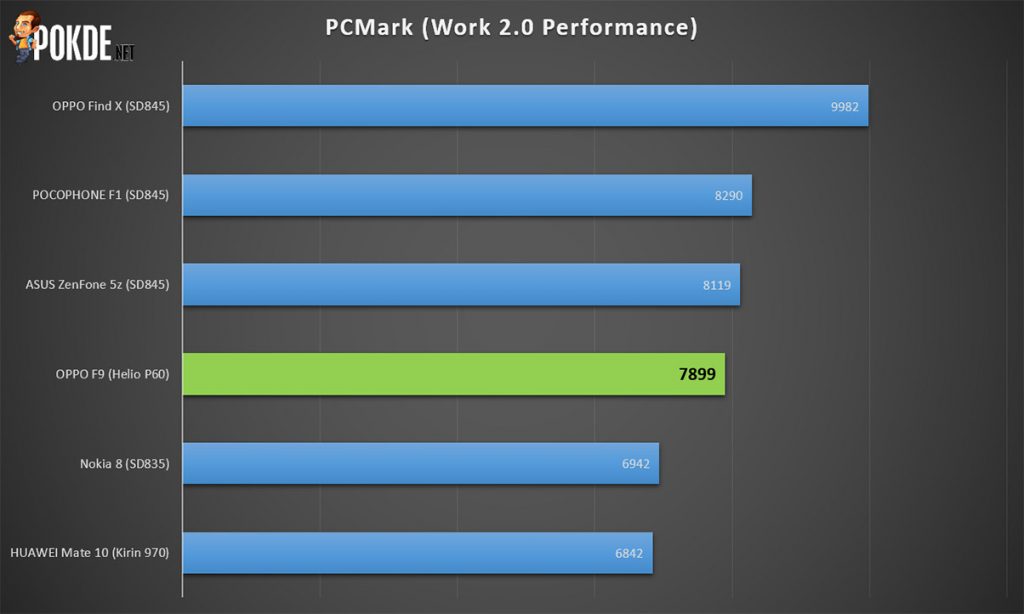 Work performance of the OPPO F9 is spectacular, almost keeping up with the Snapdragon 845 smartphones. Considering the OPPO Find X totally decimated the competition in this benchmark, we believe OPPO is probably optimizing their devices for this benchmark. 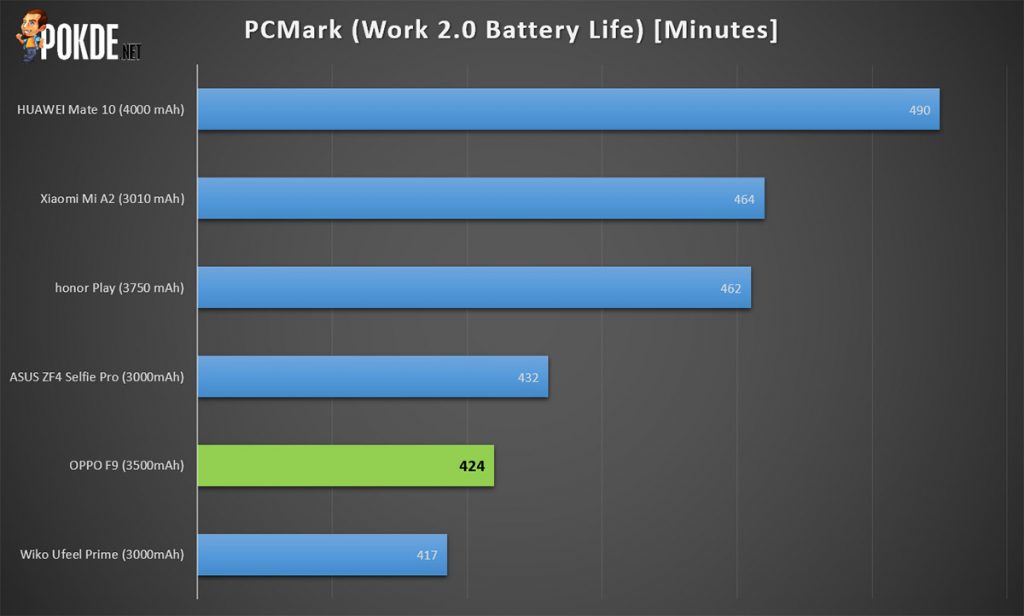 Battery life is going to be a sore point though. The OPPO F9 performs much worse than even the Mi A2, which has a much smaller battery. Is MediaTek being less efficient than their Qualcomm counterparts still true, despite moving to TSMC’s latest 12nm FinFET manufacturing process?

The battery easily lasts more than a day, while the VOOC Flash Charging system rejuiced the battery 55% in just 30 minutes, which was really impressive. That’s more than half a day of power, so you should be pretty well set even if all you have is just 30 minutes to charge your phone. 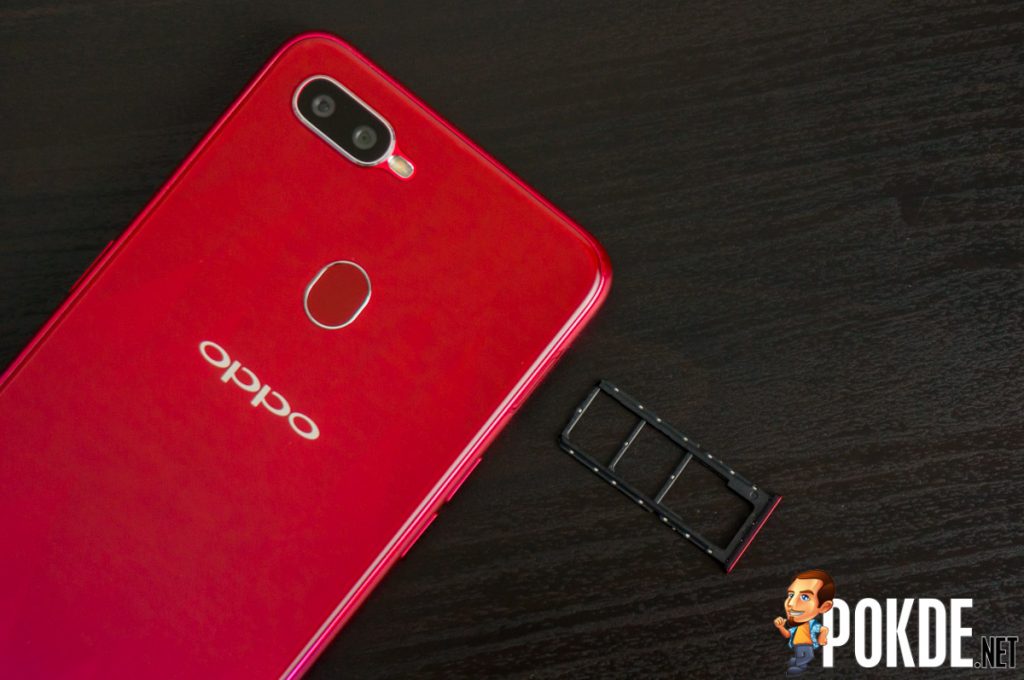 The first thing I noticed when I switched over the OPPO F9 for my daily usage was that it featured a proper dual SIM tray with a dedicated slot for the microSD card. Now that’s what I call a real dual SIM phone. The other brands should definitely follow this. 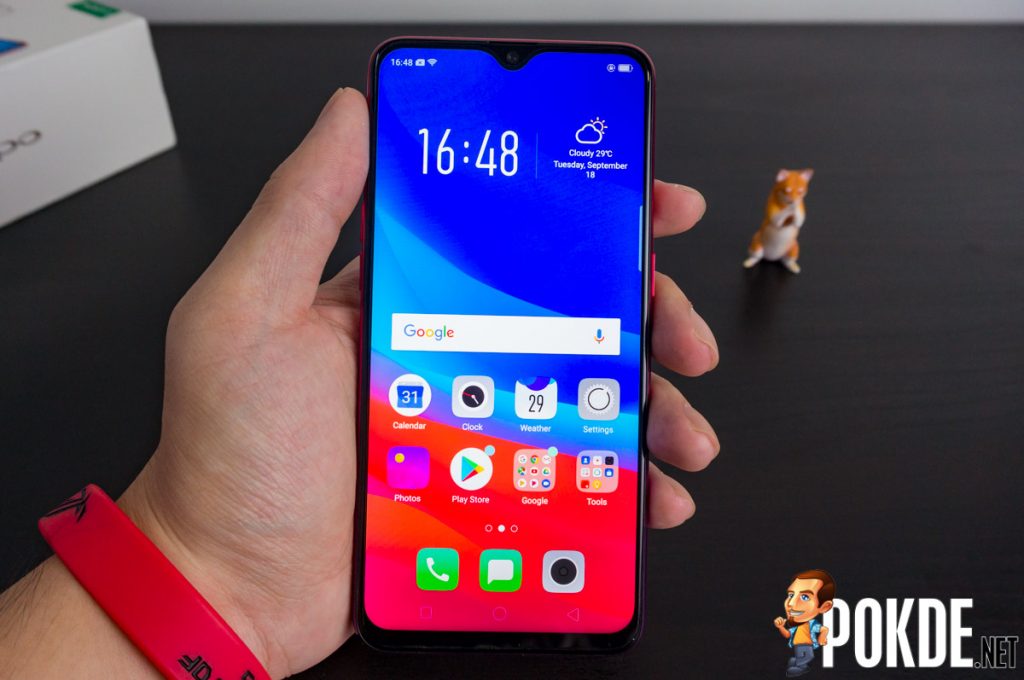 Holding the phone is a slightly less pleasurable experience though. Plastic is used way too liberally in the build of the OPPO F9. Even if you ignore the plastic back which will invariably pick up scratches, the sides are also a bit too easy to smudge for my liking. It then gets slippery, and dropping a plastic phone is never a good idea. It won’t break like glass, but it will get so scuffed up like nobody’s business. So basically I was forced to use the clear case for it all the time, which isn’t all that comfortable to use with the additional lip around the screen. 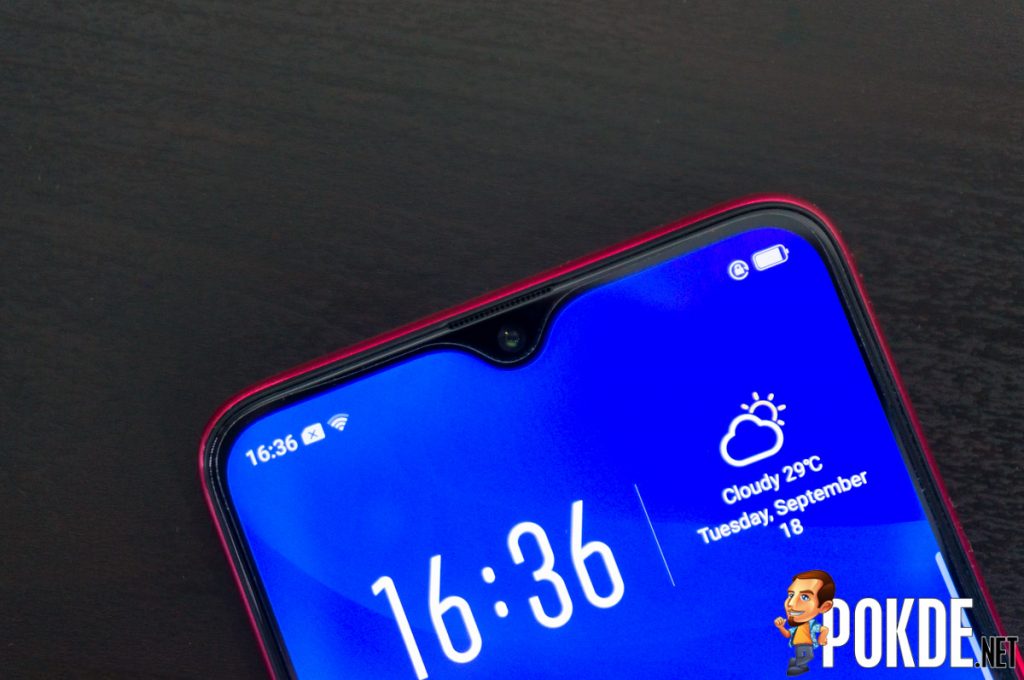 If you can stomach a fully plastic mid-range, you will find that the OPPO F9 actually is pretty interesting with its new little waterdrop notch. It really looks like a waterdrop, and it doesn’t extend nearly as deeply as you might have seen on the Essential Phone. However OPPO literally forgoes all the benefits of a smaller notch when they decided not to have any notification icons popup on the status bar. And the notch actually blocks important elements in the center top region of the screen when you use apps like Instagram. It’s not unusable simply due to the small size of the notch, but we were truly irked by it. 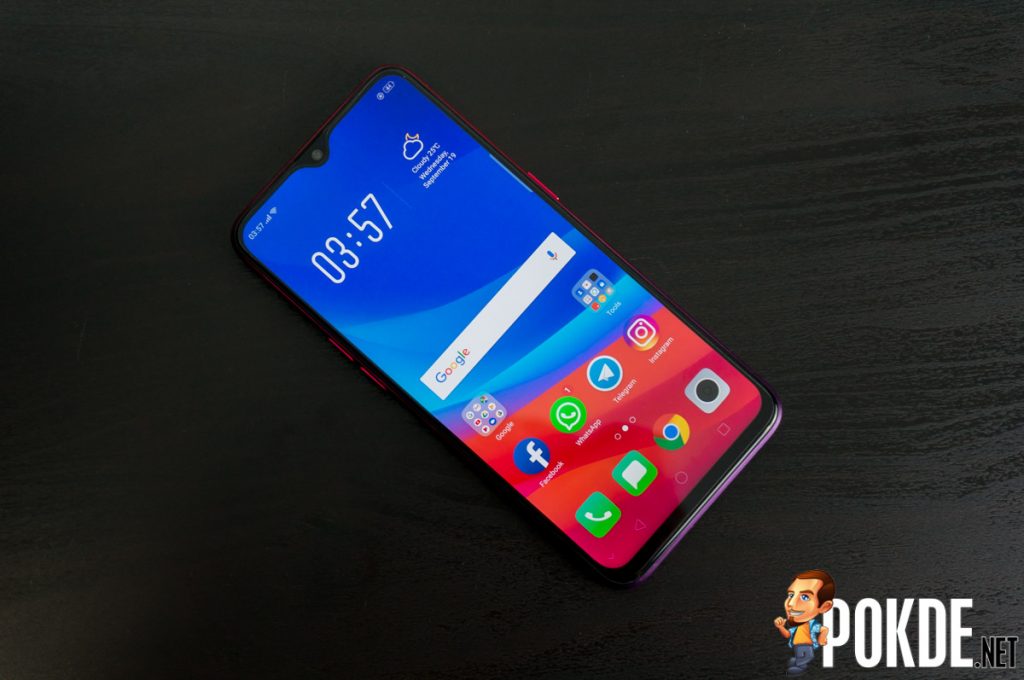 The screen itself is pretty nice, but the colors are a bit more washed out than we would like. The screen could definitely stand to be a little more vibrant. Maximum brightness is sufficient, but for those who want retina-searing brightness, you won’t get it from the OPPO F9.

ColorOS 5.2 on the OPPO F9 actually comes with some pretty cool stuff. While we believe it would have been a lot more appropriate on the very curvy OPPO Find X, the OPPO F9 actually comes with a Smart Bar which is essentially a shortcut accessible with a swipe from the edge of the screen. The rest of the UI is still pretty much the same as the one in the OPPO Find X, but because we won’t have to pay RM3699 for this, we find it more palatable here. 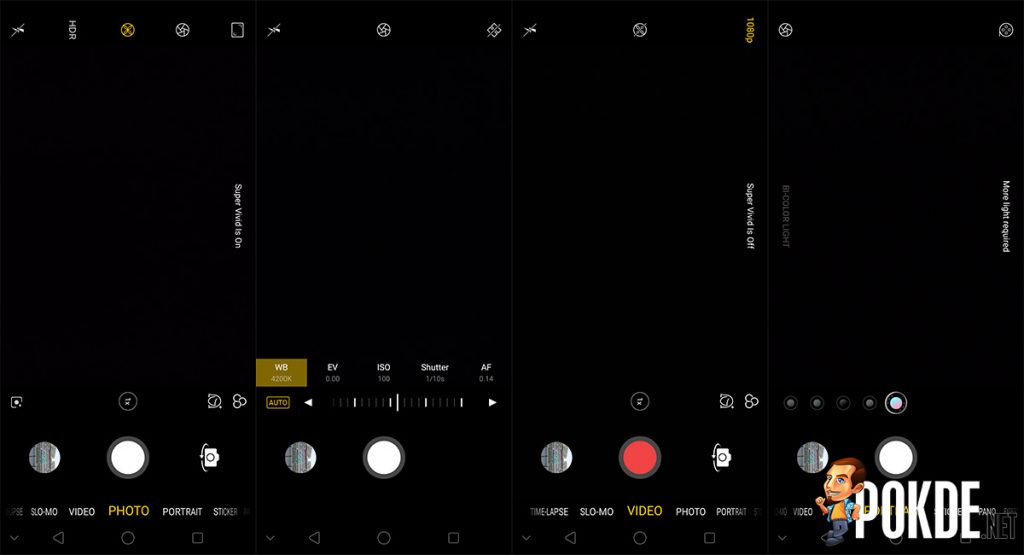 The camera app is the same as the one in the OPPO Find X, there’s a nice manual mode, stickers, portrait and also a nice little Vivid mode. Vivid mode is pretty cool actually, doing exactly what you would expect; amp up the saturation of the primary colors.

Camera results are pretty decent. Depending on whether you like the vibrant colors that can be oversaturated at times with the Vivid mode, you. For some reason, images turn out a lot better than the OPPO Find X, which was supposed to be the flagship in the OPPO lineup. HDR might be a little too aggressive, reminding us of much older phones cameras. Selfies are pretty good, but you will have to settle for really smooth and fair skin. You can check out the full sized camera samples here.

There are probably better performing mid-range devices you can get for the price of the OPPO F9. At RM1399, it isn’t too pricey, but it isn’t great value for money. You get a decent camera, pretty good performance and battery life, amazing VOOC Flash Charging and a superb selfie camera. But for less money, you could get flagship-class performance, excellent battery life and a selfie camera which isn’t half bad, especially with flagship killers on the rise recently. This is a solid mid-range devices, aside from some faults.

The main issue I have with the OPPO F9 is the plastic body, which is glossy. Glossy plastic is usually a very bad idea unless you think of scratches as battle scars and you cherish them. Don’t take me wrong, I don’t mind plastic phones. But considering what the OPPO F9 offers for its price, I feel like the least OPPO could have done was to give us a glass back. The logic might be that since everyone will be using the OPPO F9 with a case, who cares what material it is made of? With such a pretty back, I wouldn’t want to hide it behind a case. I will want to flaunt it, and OPPO doesn’t actually allow me to do that with such a scratch-prone design. What is the pretty design good for then?

Our thanks to OPPO for providing the OPPO F9 used in this review. To support us, do check out the OPPO F9 on Lazada via the following link: