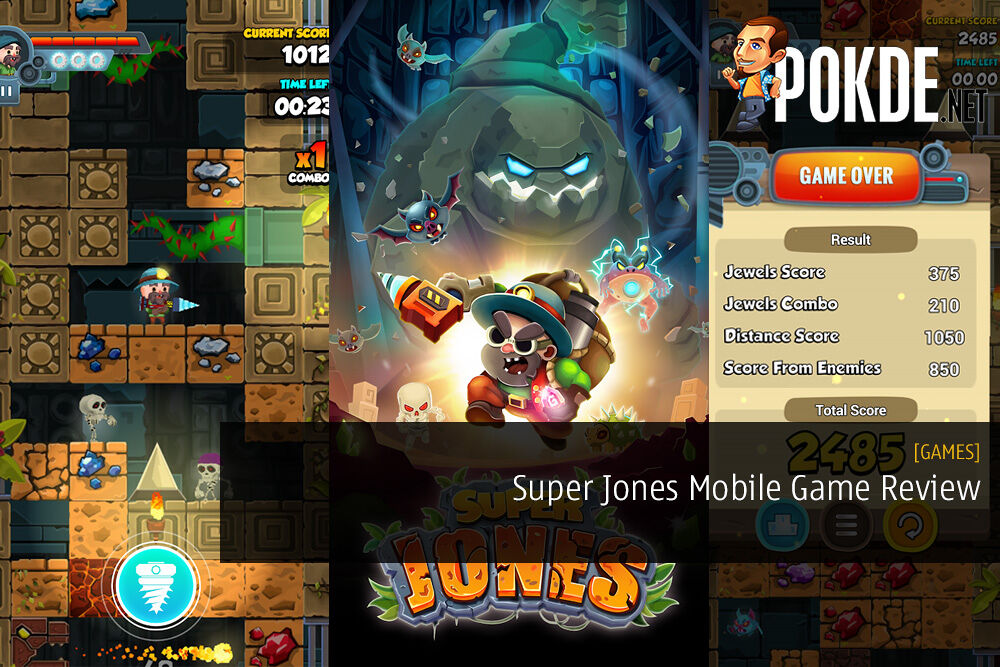 Super Jones is an arcade-style puzzle game which is a good throwback to the old arcade classics. Is it worth the effort and is the game even fun to play? That's what we're going to find out.

+ Simple, yet addictive
+ Game has surprising amount of depth
+ Great for casual and hardcore gamers
+ Can played for a short while and for a long time
+ Available on both Android and iOS
+ Light use of smartphone resources

Super Jones is a simple game in concept, but is surprisingly very addictive. It can easily appeal to both casual and hardcore mobile gamers who are seeking to play for a short while and for long hours.

What is Super Jones About?

Super Jones is an arcade-style puzzle game developed by Techninier where you drill your way downwards to obtain the best score possible. Players obtain points by drilling into blocks with precious jewels, subduing the monsters using the drill, and venturing further into the mine. Players will only have three hit points, and the game will end upon the third hit. Furthermore, there is a time limit for every round, further adding pressure to the players in the game.

If you want to learn more about Super Jones or Techninier, click right here.

A Fond Reminder of Arcade Classics 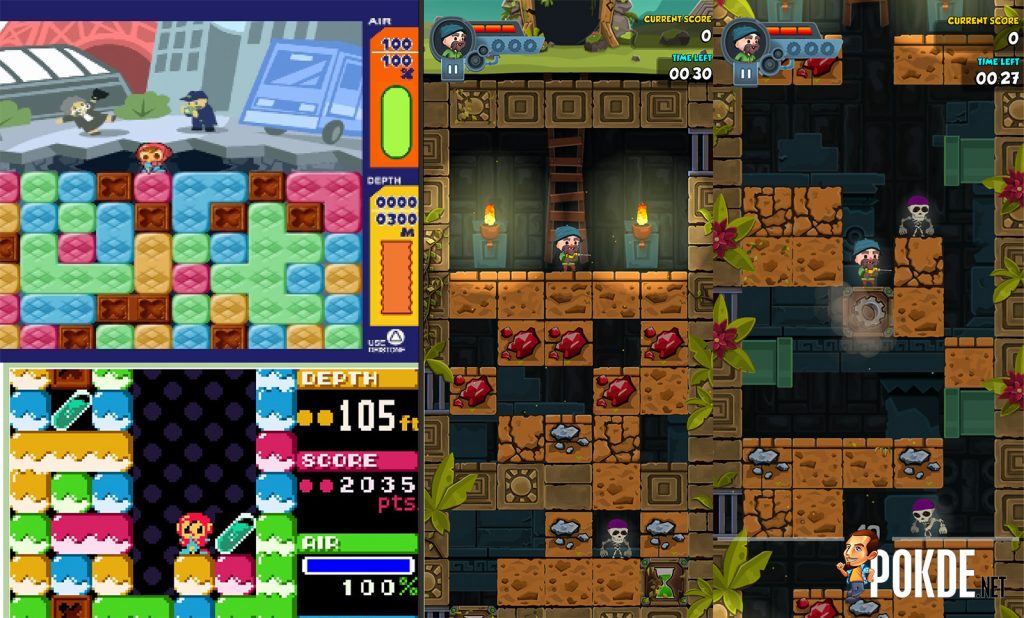 Mr. Driller (on the left) compared to Super Jones (on the right).

When I first started playing Super Jones, it gave me that feeling that I’ve played the game before a long time ago. Something about the premise seems oddly familiar. Then it hits me. Super Jones is quite similar to the Namco arcade classic, Mr. Driller.

Of course, there are some differences in game elements but the premise is essentially the same. You drill your way downwards as far as possible and collect as many items as you can. Instead of having limited oxygen and collecting oxygen tanks, you have a very limited time in Super Jones which can be supplemented by a stopwatch block, which adds five seconds to the clock. 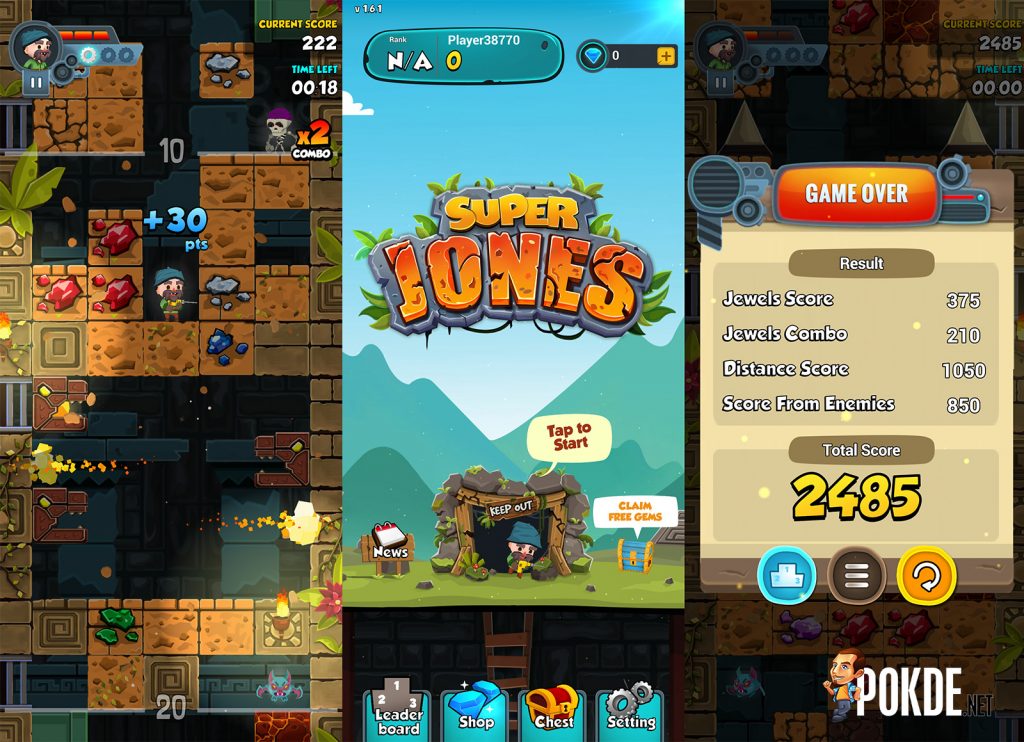 There are plenty of obstacles in the game, so just spam drilling your way downwards is almost always a poor choice of action. You will most likely be obliterated by fireballs, spikes, monsters, and more. That’s what I love about the game, you have to strategize and think as many steps ahead as possible to survive and get the best possible score. Some blocks will require you to drill multiple times before it breaks, adding further depth to the gameplay.

At times, it feels like you have to go against your instincts and reflexes to survive or simply not take a hit. Especially during portions of the stage where there are spikes, any gamers’ immediate reaction is to avoid spikes by landing on a relatively safe block. This will only work only on the first spike for that particular portion as the next row of spikes will be under you, and the safe block is under the spike on the existing row that you are on. What do you do then? Drill the spike on the existing floor. 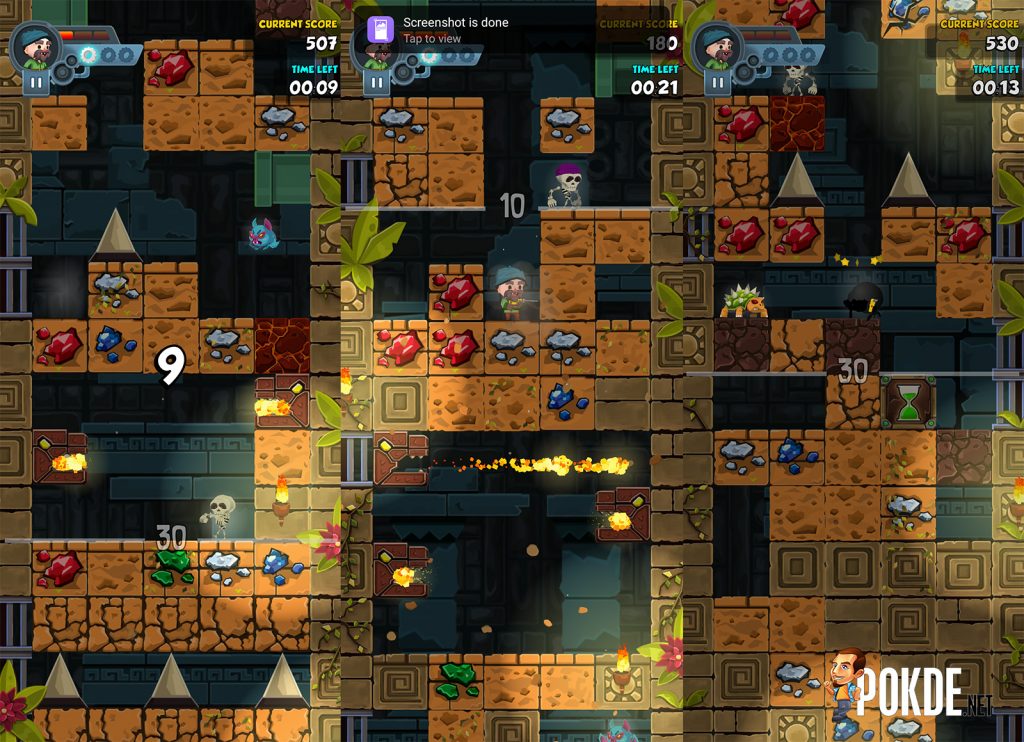 Chances are, you won’t figure that out immediately and it is something done out of experimentation. This is especially tricky to figure out as the safe blocks near the spikes are fragile and will break in a matter of seconds upon standing on them. This clever game design is also hinting the players that with every obstacle presented to you, there is always a solution. You just have to be on your toes and think with a sharp mind.

Special Tools to Get That Needed High Score 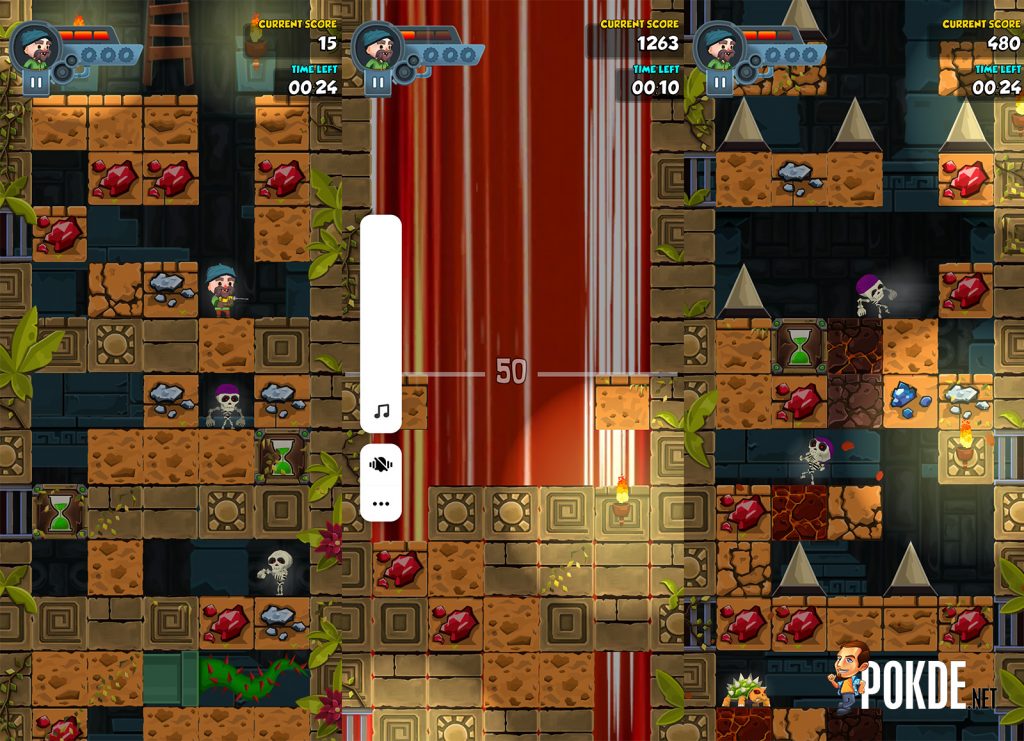 When you’ve gotten used to the game, there is a very likely chance that you find yourself stuck within the same score range and not be placed in the leaderboard. This can lead you to wonder as to what you’re doing wrong and if there’s some sort of secret to the game that will give you better playthroughs. There are two actually that you may or may not be aware of; the Giga Drill power-up and Ability Upgrades.

The Giga Drill power-up works by collecting three Gears by drilling through Gear Blocks. When you have three of them, you can use the Giga Drill power-up, which will land a powerful vertical hit downwards the mine and eliminate any monsters and dangerous obstacles within your sight. 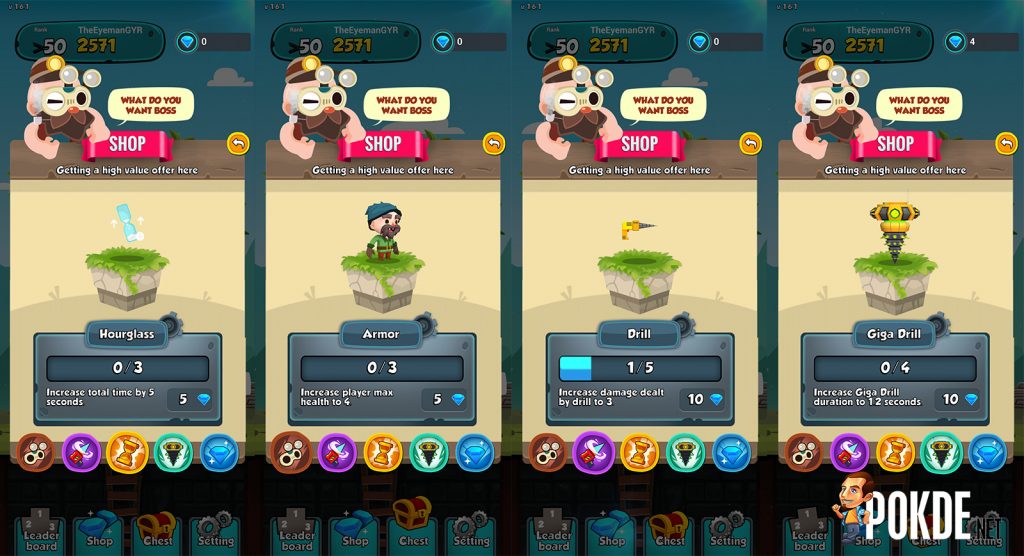 As for Ability Upgrades, you can spend Gems to upgrade your character’s hit points, drill damage, Giga Drill duration, and add more time. Players can purchase the Gems via microtransactions, or simply collect two of them every few hours for free. These Gems can also be used to give your character the chance to continue in a particular round when you’ve lost all your hit points. Essentially, Gems are a very precious resource in the game which, when used correctly, can lead you to obtaining the much-needed high score. 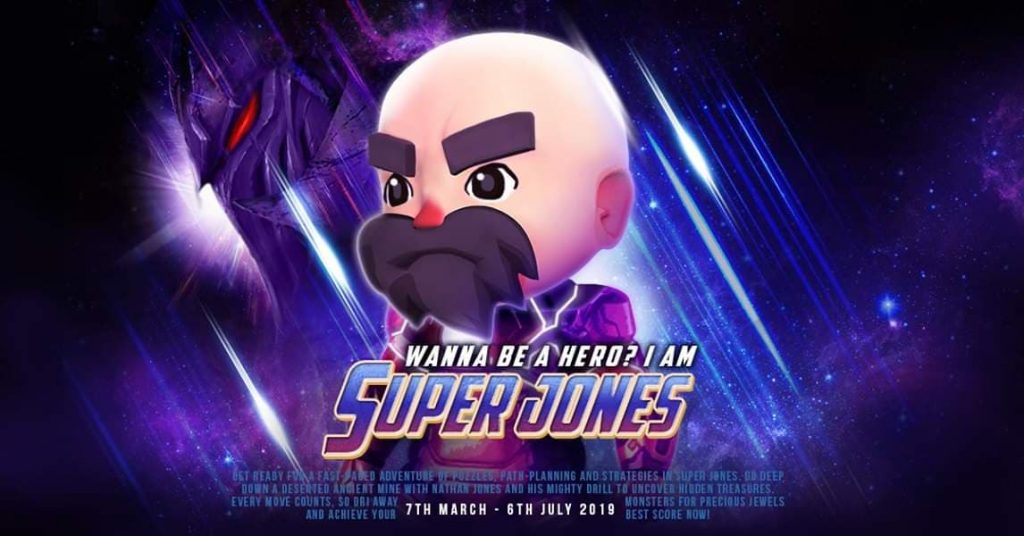 Super Jones is a simple game in concept, but is surprisingly very addictive. Each round won’t take long so you can easily play this when you need a five-minute break or can’t afford to game too long. It can get a bit frustrating at times, which actually adds to the entertainment factor in my opinion, but you simply need to be patient and soldier on. My only complaint is that every time I lose, the first thing that pops up is the option to use my Gems to continue. I wished they’d combine that with the Game Over screen for faster and easier retries.

The visuals you get here are pretty much standard with every other mobile game out there. It’s appealing enough but nothing that can be considered even remotely jaw-dropping. Like with every game, the appeal should always be the gameplay and not the graphics. The gameplay itself is something I feel can easily appeal to both casual and hardcore mobile gamers. It can also be a good fit for those who have a busy lifestyle, and those who want to continue playing for hours on end due to how short each round is.

With that, I award Super Jones with our coveted Gold Pokdeward.

Aiman Maulana
Jack of all trades, master of none, but oftentimes better than a master of one. YouTuber, video editor, tech head, and a wizard of gaming. What's up? :)
Pokde Recommends
AndroidarcadeCelcomCelcom Game HeroCompetitioncontestGamingiosAndroidGamingiOSMobileReview
MORE
Read More
845

What Are TWS Earbuds? Are They Better Than Wireless Bluetooth Earphones?
Read More
780