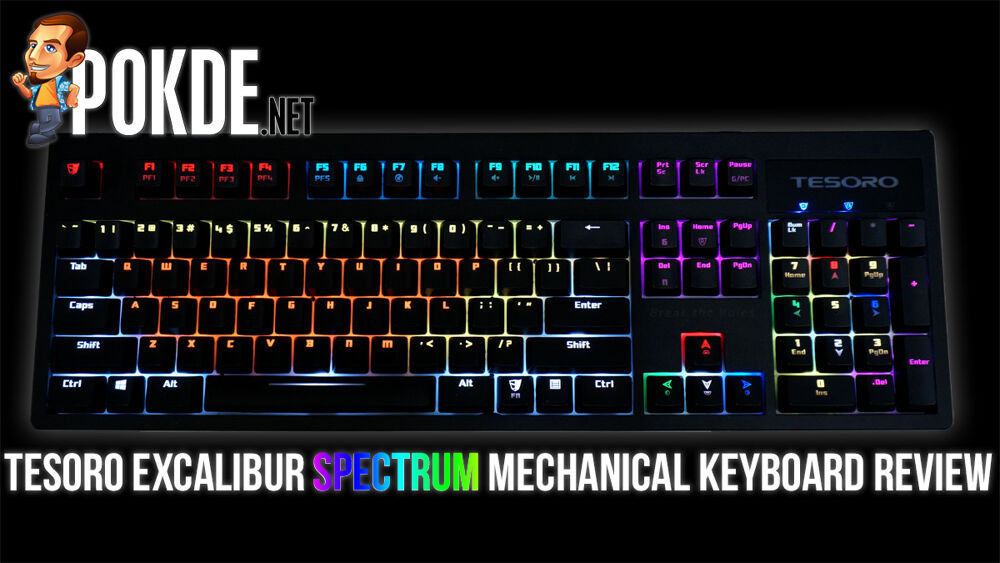 The Tesoro Excalibur Spectrum looks like any other mechanical keyboard but sports excellent RGB backlighting while bearing an affordable price tag. This is definitely a RGB keyboard to consider for the budget conscious.

RGB keyboards are aplenty in the market nowadays, but their pricing is still out of reach of gamers on tighter budgets, like yours truly. Let’s not beat around the bush and take a look at what should be the most affordable RGB keyboard in the market right now, the Tesoro Excalibur Spectrum. 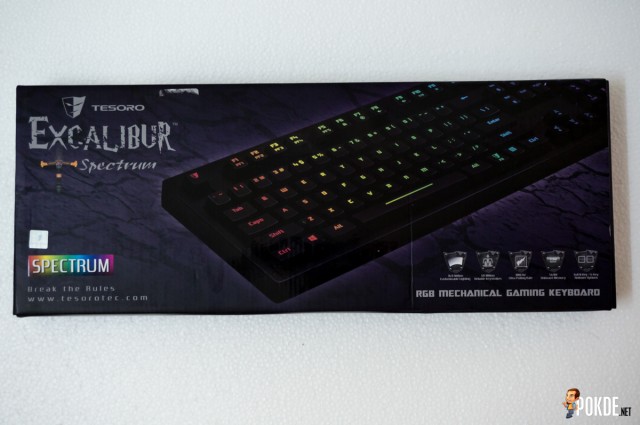 The top panel of the box sports a nice product image and also some highlight features of the Tesoro Excalibur Spectrum. Spectrum is Tesoro-speak for RGB, in case you didn’t know. 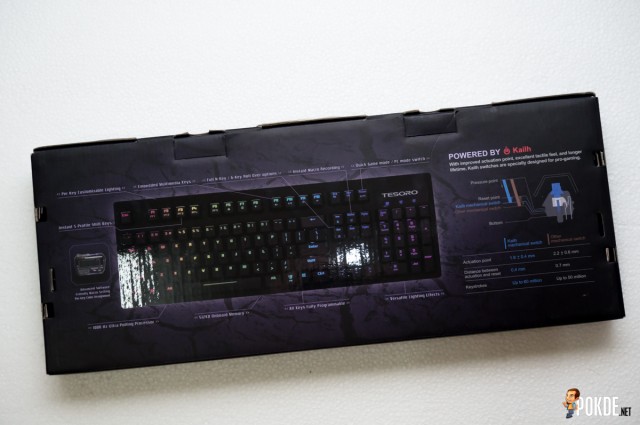 On the back we have a clearer look at the keyboard, along with more descriptions of the keyboard’s features. 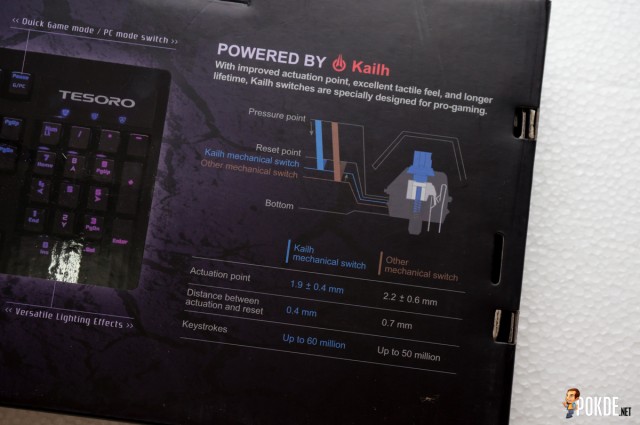 This is kinda interesting… It seems that these switches are similar to Razer’s custom mechanical switches. We do know that Razer switches are manufactured by Kailh but I didn’t know that Kailh can manufacture switches based on the same design for other OEMs. 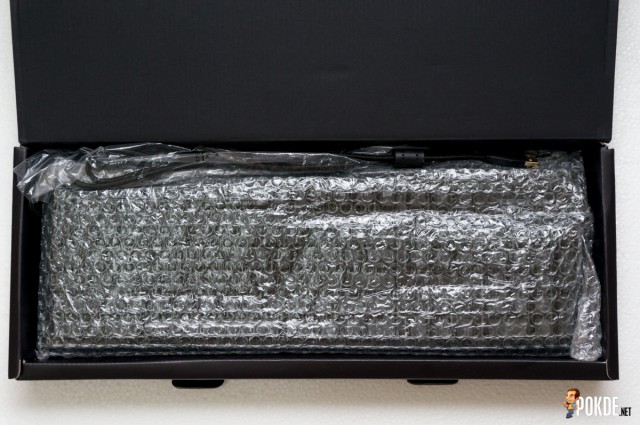 Opening up the box, the keyboard is well protected from damage by bubble wrap. 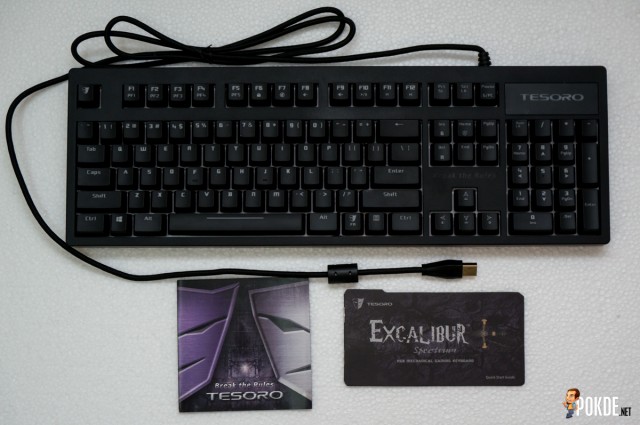 These are the contents of the box. The Tesoro Excalibur Spectrum itself, a quick start guide and a product guide in case you want to check out other peripherals by Tesoro to complement your new purchase. 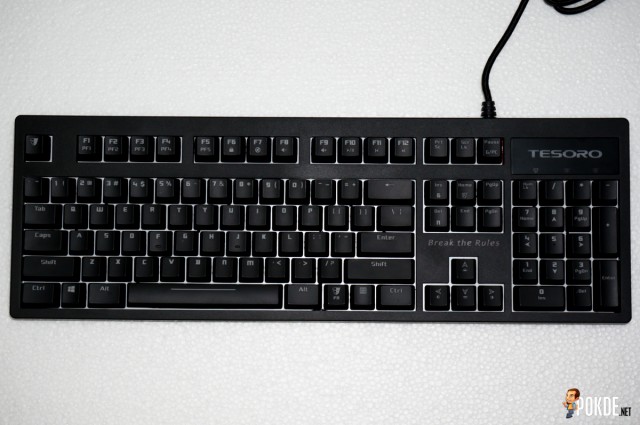 The Tesoro Excalibur Spectrum looks pretty much like every other mechanical keyboard in the market. That can be good or bad depending on your tastes. The frame is plastic with a rough sandblasted texture which doesn’t attract fingerprints. You can also see the white backplate between the keys. White backplates are preferred for RGB keyboards for more vivid backlighting. The cable is non-detachable. 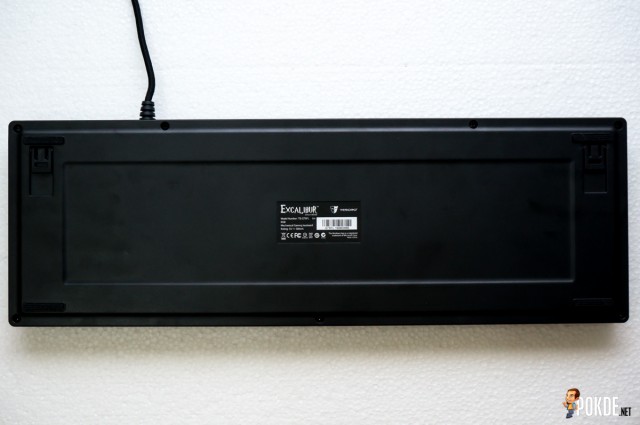 Flipping the Tesoro Excalibur Spectrum over, the rubber feet are pretty small. The flip out feet are also pretty tiny. 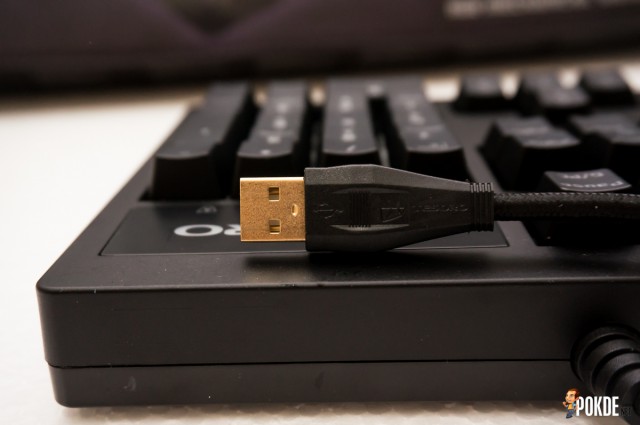 The USB connector is gold plated with a nice grip. Cables are braided and stress reliefs on both ends seem sturdy enough. While gold plating doesn’t improve performance, it is always nice to see on any USB connector. 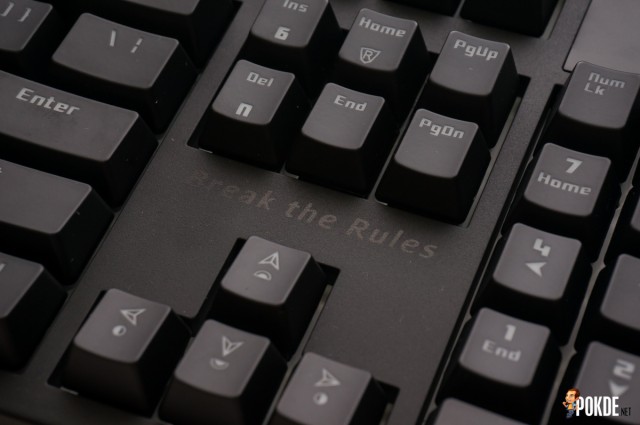 The Tesoro Excalibur Spectrum saves you the time needed to connect the cable to the keyboard as the it comes with a non-detachable cord. As usual for fixed cables, cable management will be more of a nuisance as you will not get any routing channels inset into the keyboard. 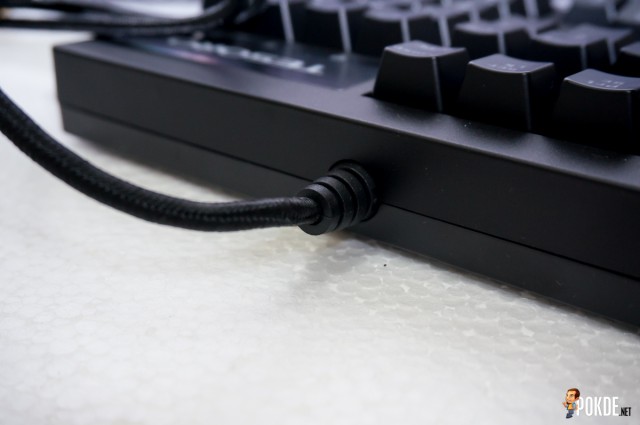 The cable here is also located on the upper right edge of the keyboard. Depending on how you route your cables, this can be either a nuisance or a godsend. I use a laptop, so the stress relief pushes against the edge of my notebook. Not great.

The flip out feet to adjust the Tesoro Excalibur Spectrum are smaller than on most mechanical keyboards but are actually enough to keep it raised. Pushing the keyboard forward on purpose can make the feet collapse but the feet stayed put during even the most vigorous gaming and typing sessions. 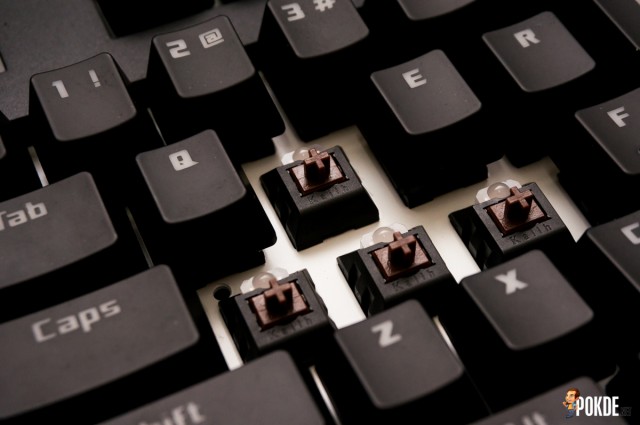 The switches here are Kailh Brown switches with RGB LEDs fitted at the top. This is unlike the Kailh switches found in the Tesoro Gram Spectrum or any Cherry MX RGB switch which have the LEDs inside the switch housings for more even illumination. However the ones here do just about as great a job so I am not complaining. The brightness of the LEDs are decent but the Ducky Shine 5 does have brighter ones. Taking a look at the longer keys also reveal that the Tesoro Excalibur Spectrum relies on a wire stabilizer, which means you will have a hard time getting third party keycaps to customize it.

Being an RGB keyboard, you would be nuts not to make use of the customizability of the backlighting. There are multiple modes to choose from, including individual key backlighting. You can program up to 6 different backlighting profiles which can also be linked to separate applications. You can make only the WASD cluster be illuminated when you have Battlefield 4 running, for example. Configurability isn’t really an issue with the Tesoro Excalibur Spectrum with the included driver software. 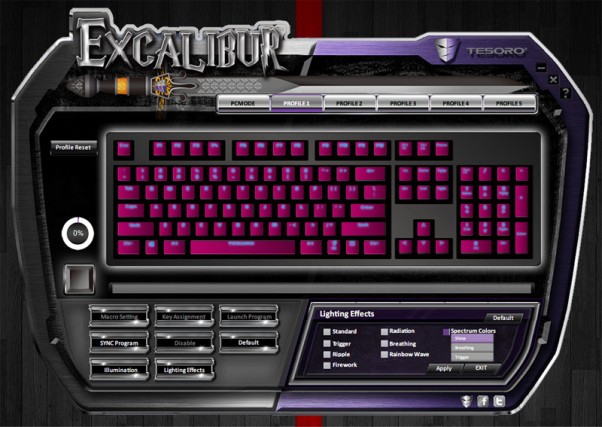 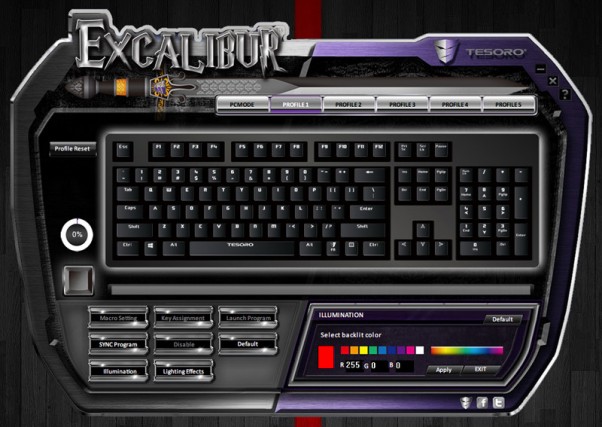 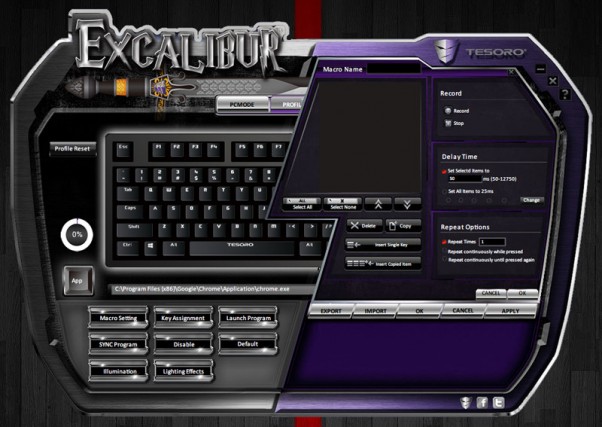 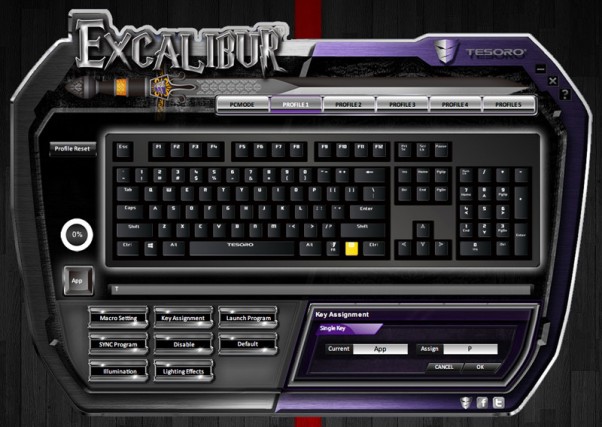 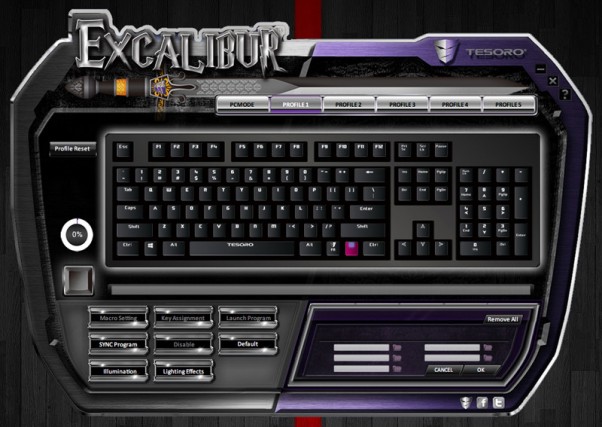 The driver software here is similar to the one the Gram Spectrum uses. Which means every comment I made regarding the ridiculously tacky UI design still stands. However I am not sure whether the driver here is improved or its a something to do with Windows 10 (I reviewed the Gram Spectrum on the MSI PE60 Prestige running Windows 8.1), but the annoying error sound every time I forget to press Apply or Cancel is not present here. It is so much more comfortable to use now. The driver software allows you to record macros, reassign keys and more. As the profiles can be automatically switched when starting a linked program, you can also reassign keys for a better optimized gaming cluster or program macros that will automatically be available when you start your game.  However I did notice an issue whereby it will not reset to the previously used profile when I quit the linked application, so if you have reassigned keys, make sure to reactivate the correct profile upon quitting or be ready for a lot of confusion. 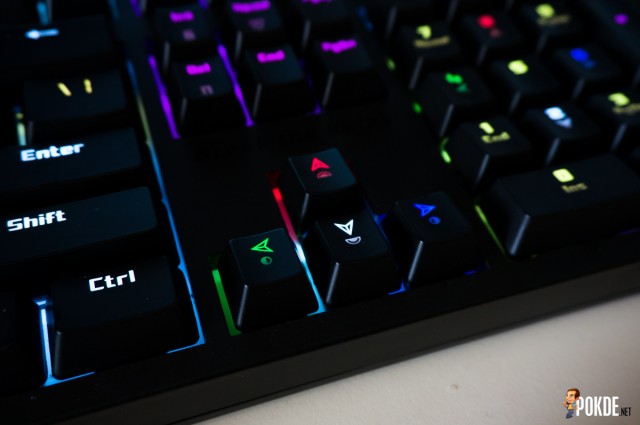 The up and down arrow keys here adjust the brightness of the backlighting while the left and right keys change the backlighting modes. There are five levels of brightness including off. Surprisingly there is no brightness setting within the very comprehensive driver software. Other functions that can be accessed via the keyboard itself is NKRO/6KRO mode, macro recording and disable Windows key.

The Tesoro Excalibur Spectrum uses Kailh Brown switches which are often considered to be inferior to the more trusted Cherry MX switches. Kailh switches have actually come a long way and are now a valid alternative to Cherry switches. They do not feel the same though even when talking about the same color code.

We thank Tesoro Malaysia for providing us with the Tesoro Excalibur Spectrum in this review. 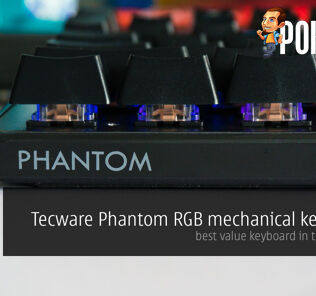 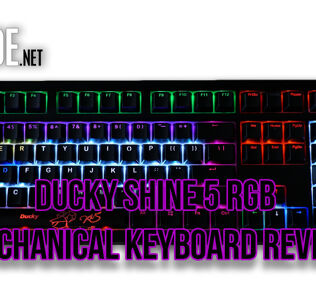 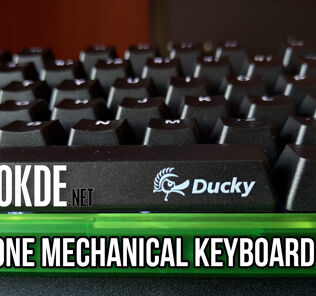 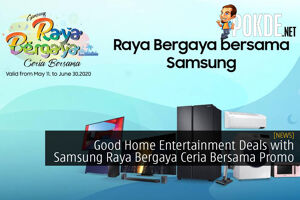 Get Some Good Home Entertainment Deals with Samsung Raya Bergaya Ceria Bersama Promo
PokdePicks:TM Clarifies on Ultra Affordable Unifi 30Mbps RM39 Per Month Offering
Get The Best Deals on 10th Gen Intel Core HP Laptops to Boost Your Productivity on Intel Day
TUF Gaming laptops in China have a mascot you are sure to fall in love with
Removable Cameras The Future For Smartphones?
Latest Reviews
Read More
1378