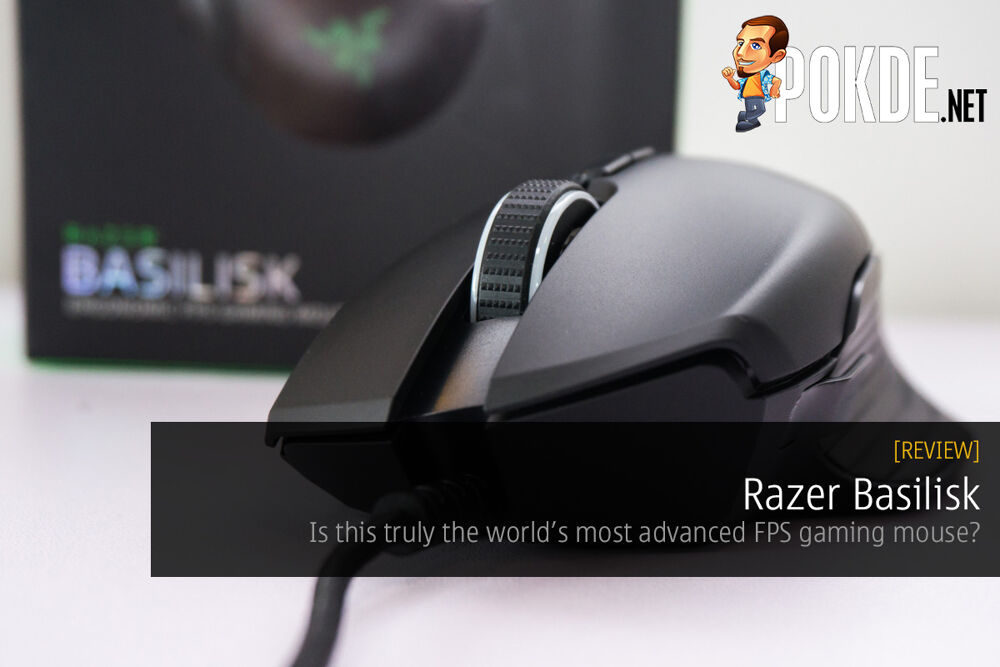 The Razer Basilisk packs some new features in Razer's lineup in a new ergonomic shell for a very compelling package!

Razer makes all kinds of gaming mice but the Razer Basilisk we have here is the first time they have made a mouse targeted at FPS gamers specifically. It is also Razer’s  second mouse with a clutch button for the FPS gamers who might want to turn down the DPI just as they are swinging in to make that perfect headshot. While I will most probably never land off any headshots with or without the clutch, let’s have a go at it. 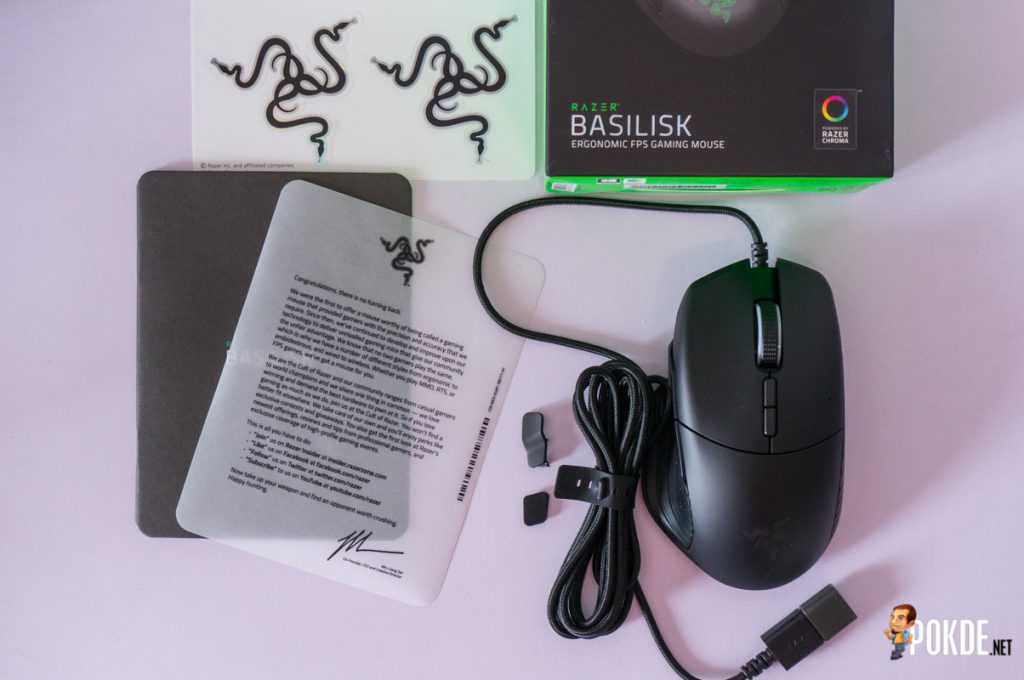 There aren’t really a lot of goodies that came along with the Razer Basilisk. The Razer Basilisk’s clutch is customizable, with a shorter clutch key and also a rubber stopper in case you aren’t interested in having an extra button. You get some basic documentation as well as two coveted Razer stickers. 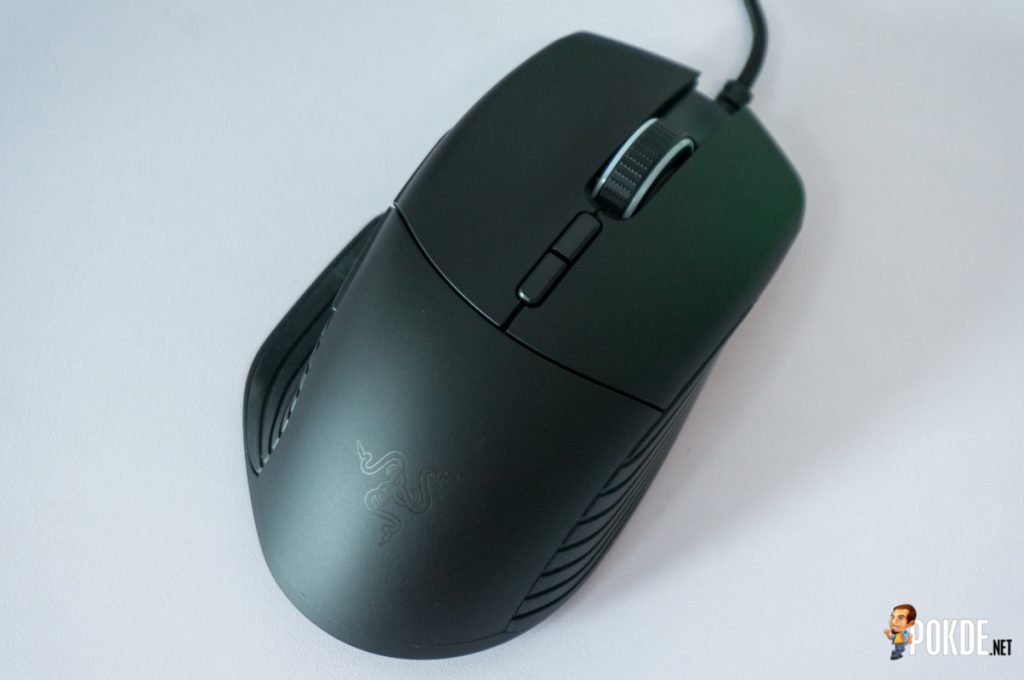 Razer seems to have finally gone back to the drawing board for the Razer Basilisk. The Razer Basilisk slopes steeply to the right side, with a scooped out left clicker. The scroll wheel is pretty standard affair for Razer, with stubbly rubber sandwiched between two clear strips. The two primary clickers are separate from the rest of the body, a design decision that usually translate to better responsiveness as you won’t have to rely on the shell to flex to actuate the switch under the button. 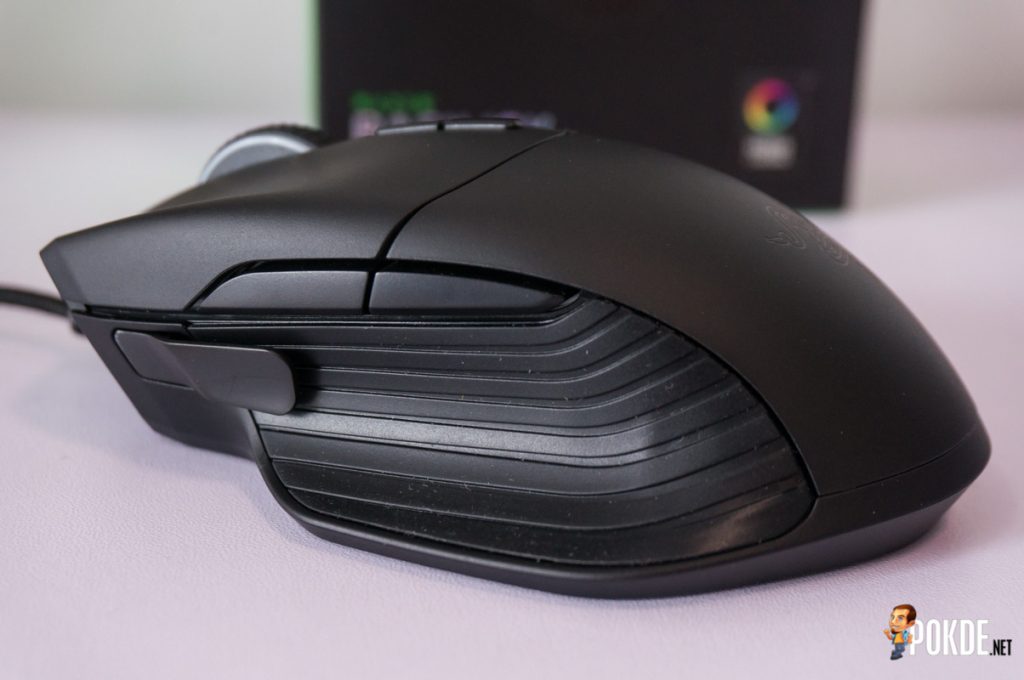 Here’s a closer look at the Razer Basilisk’s right side. Your thumb gets a pretty spacious resting area here. The grooves on the rubberized surface look perfect to collect dust and crumbs, but do stand to offer some extra grip. The clutch key will be right in front of your thumb when you hold it, while the two side buttons are situated above your thumb. 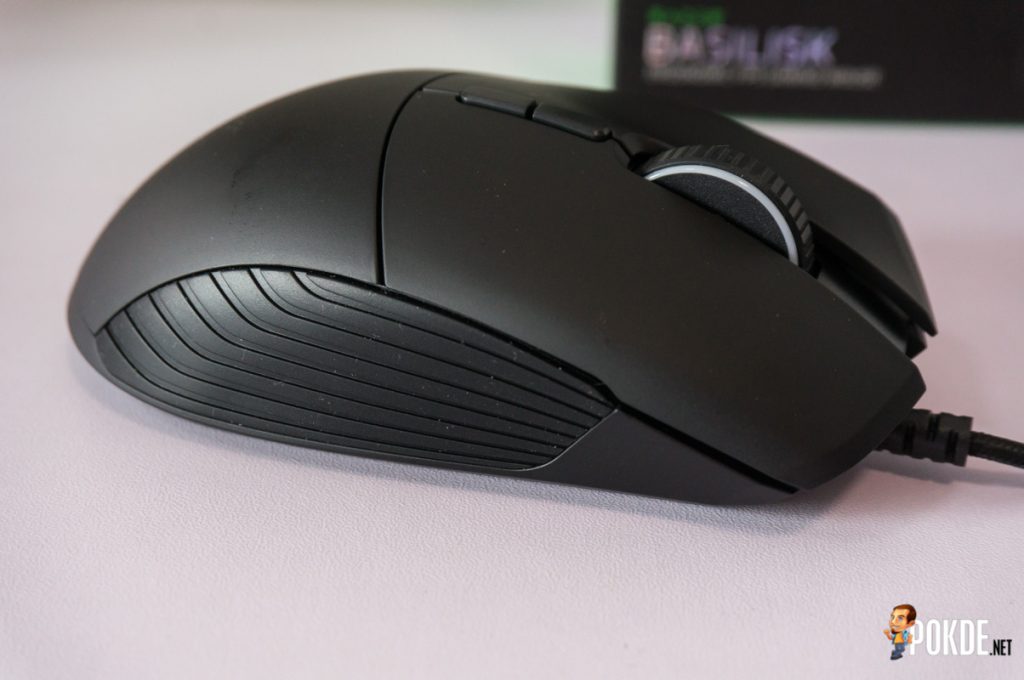 Over on the right we see more of the rubberized grooves. This side is decidedly more conventional for Razer, with a smoothly sloping edge. Would have been interesting to see a more sculpted place for my pinky to rest, but that could have been even more polarizing than the thumb rest. 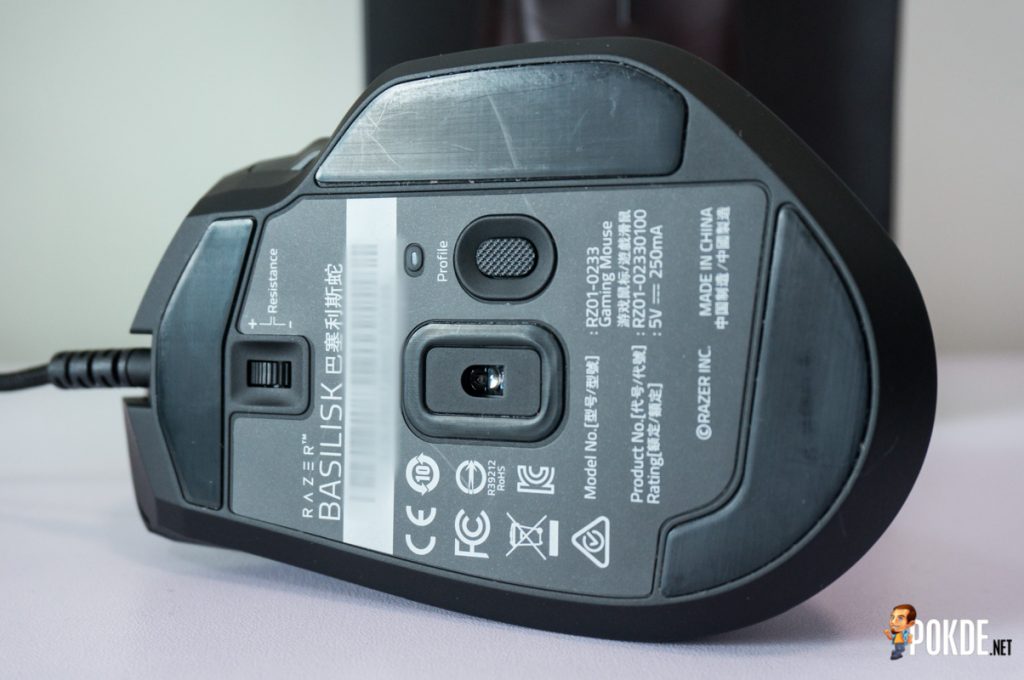 Flipping the mouse over reveals Razer’s 5G Optical sensor, which they claim to be the most advanced optical sensor in the world. This is flanked by a profile switcher button, which allows the Razer Basilisk to switch between the 4 on-board profiles. A LED lights up in different colors to indicate the profile you are currently using. Closer to the front of the mouse is where you will find the dial to customize the scroll wheel’s resistance. 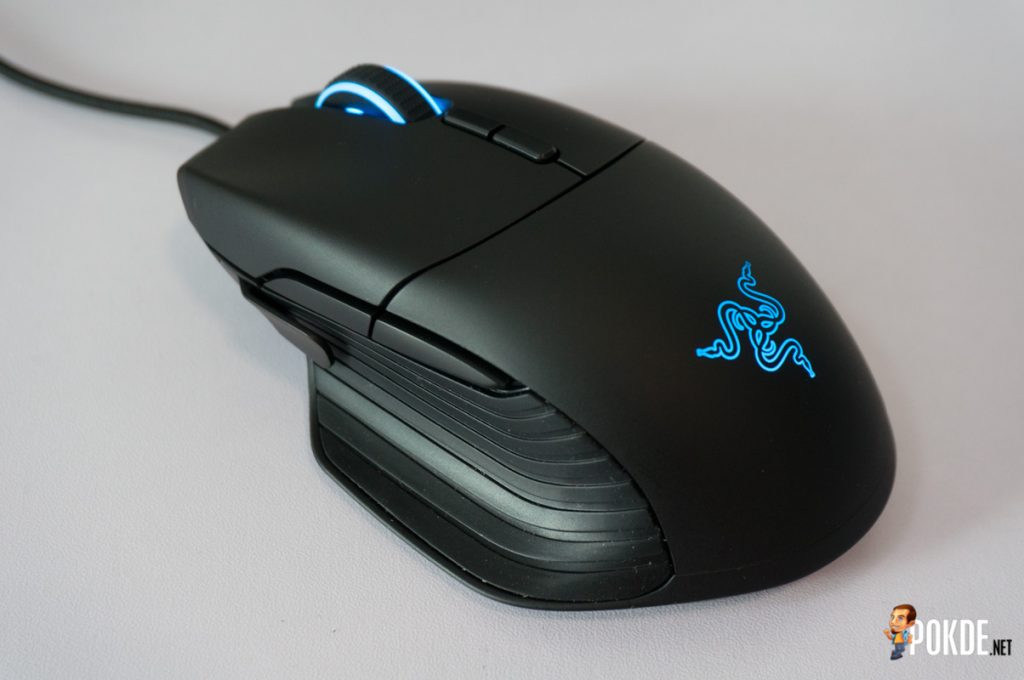 One thing that you might have noted is the absence of lots of translucent plastics. The Razer Chroma here on the Razer Basilisk is quite subtle, with only the scroll wheel and Razer emblem glowing in all 16.8 million colors of RGBae glory. The wheel and logo are very evenly lit, so good that even sufferers of OCD won’t be picking on it. 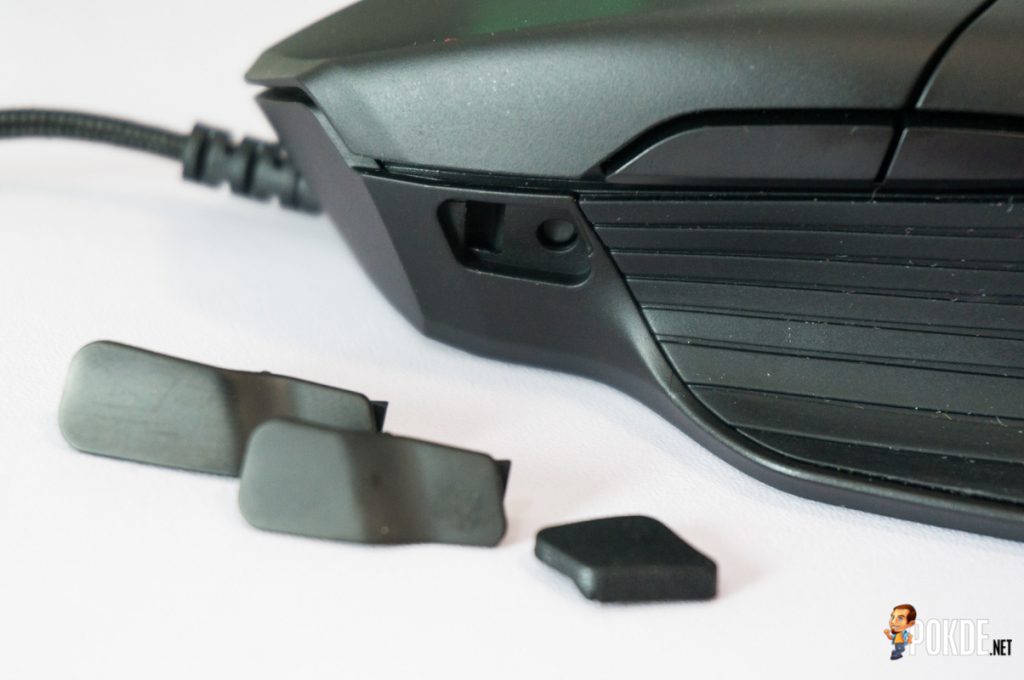 Let’s take a look at what makes the Razer Basilisk unique first, before getting on to the more mainstream stuff. First and foremost, there is the clutch. It isn’t that unique if you consider that Corsair and Logitech have implemented it in their gaming mice for quite some time already, and more recently we see ASUS do it for the ROG Gladius II. While the idea isn’t unique, the implementation is. Instead of a simple button, Razer designed a lever of sorts for the Razer Basilisk. The clutch is lighter to actuate than most buttons, making it all the better to clutch games with by instantly lowering your DPI for extra precision. With the lever comes the ability to pick between the two included lengths. I personally use the shorter one as the default one is too long and gets in the way of my thumb resting. And I also use it as my HyperShift key, instead of the default DPI toggle function. 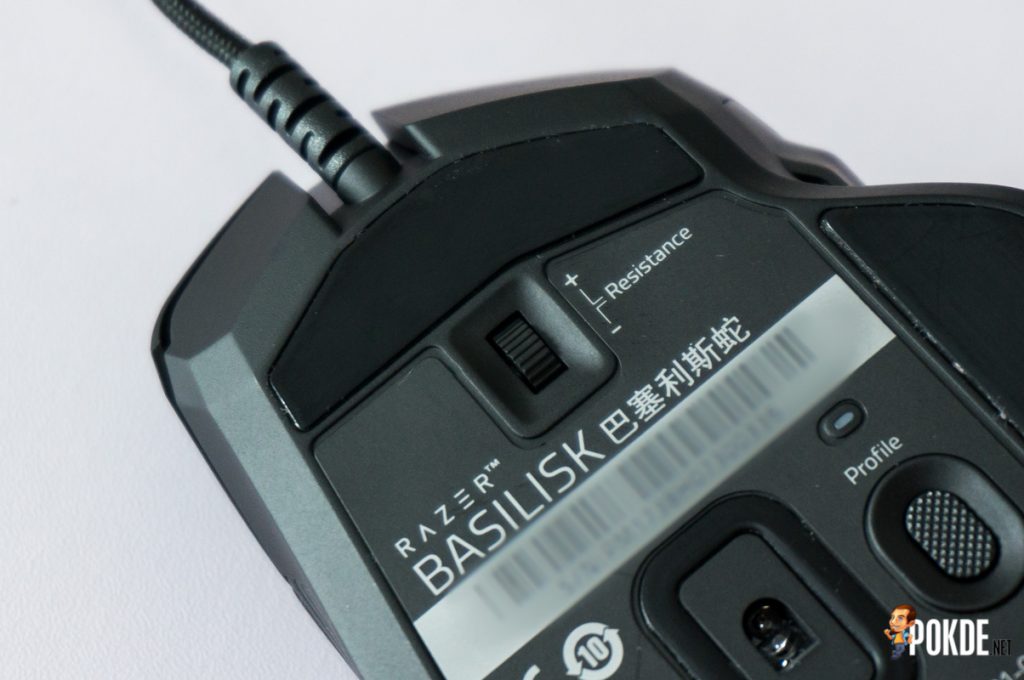 Next up, the scroll wheel with the adjustable resistance. Logitech’s hyperscroll wheels allows you to switch between a free-spinning or notched scrolling, nothing in between. Razer’s dial allows you to personalize the stiffness. You can select anything from a stiff notched scroll experience to an almost-free spinning experience. The notches are pretty small too, so small movements are all you need even if you tune the resistance all the way up. The downside is that you have to flip the Razer Basilisk over to do it, so you can’t do it on the fly. Being able to do it on the fly is great to fly through long paragraphs that you are too lazy to read, and immediately slow down to scroll through the important bits. Hopefully Razer will add it to the next gaming mouse they design. 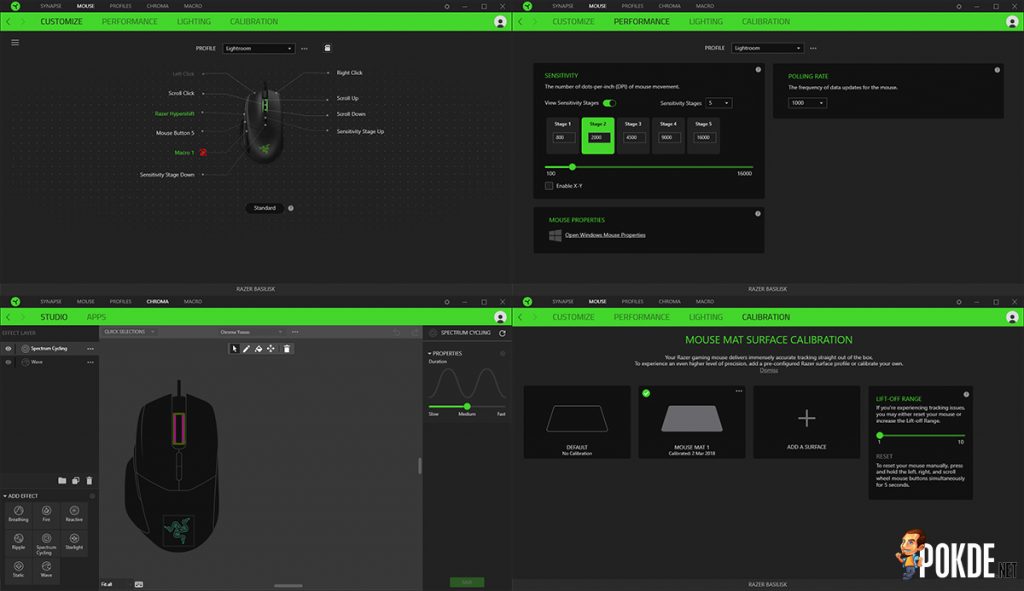 Razer Synapse 3 has received frequent updates since the time I reviewed the Razer Lancehead. In its current iteration, the biggest change I found is that it can be configured in a dark mode too, if green-on-white isn’t good for you. The powerful macro editor, Razer Chroma Studio, fully customizable key assignments are all here. The aforementioned Hypershift lets you effectively assign a second layer of functions to the buttons when the Hypershift key is pressed. My Hypershift key is the clutch, while I have set the scroll wheel to adjust the volume when I am in Hypershift mode. 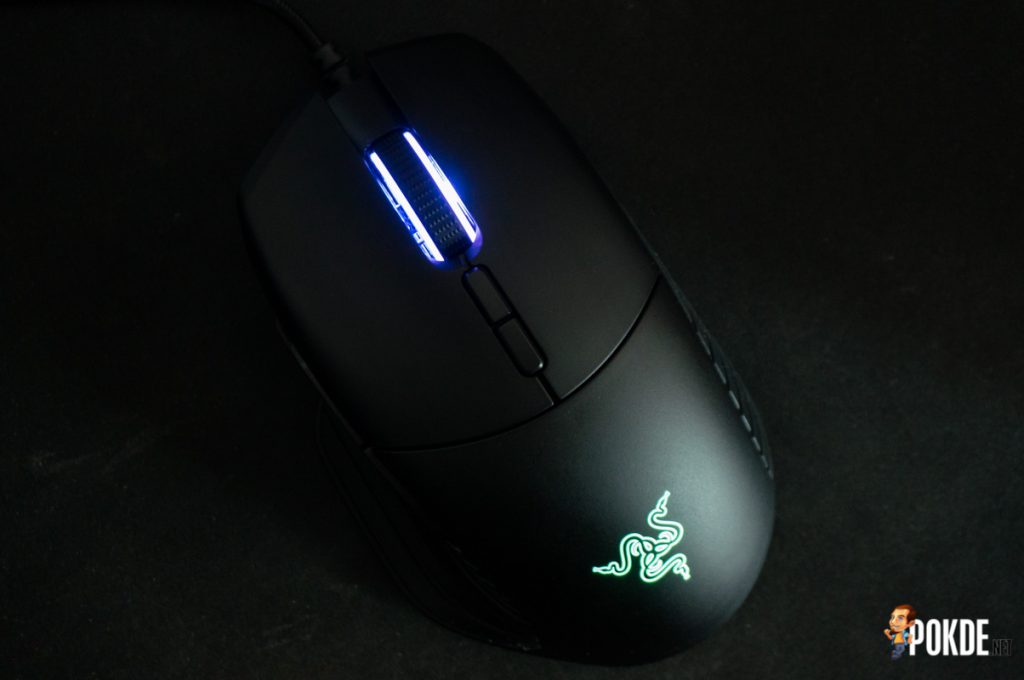 While I have said Razer Chroma is the best RGB implementation ever, Razer didn’t throw much of that into the Razer Basilisk. Only the logo and scroll wheel can light up. You can assign many effects to it, but due the fact that they are single lighting zones, you can’t get nice waves running through the logo or scroll wheel. The LEDs are plenty bright, and the colors are very vivid, but that’s about it. 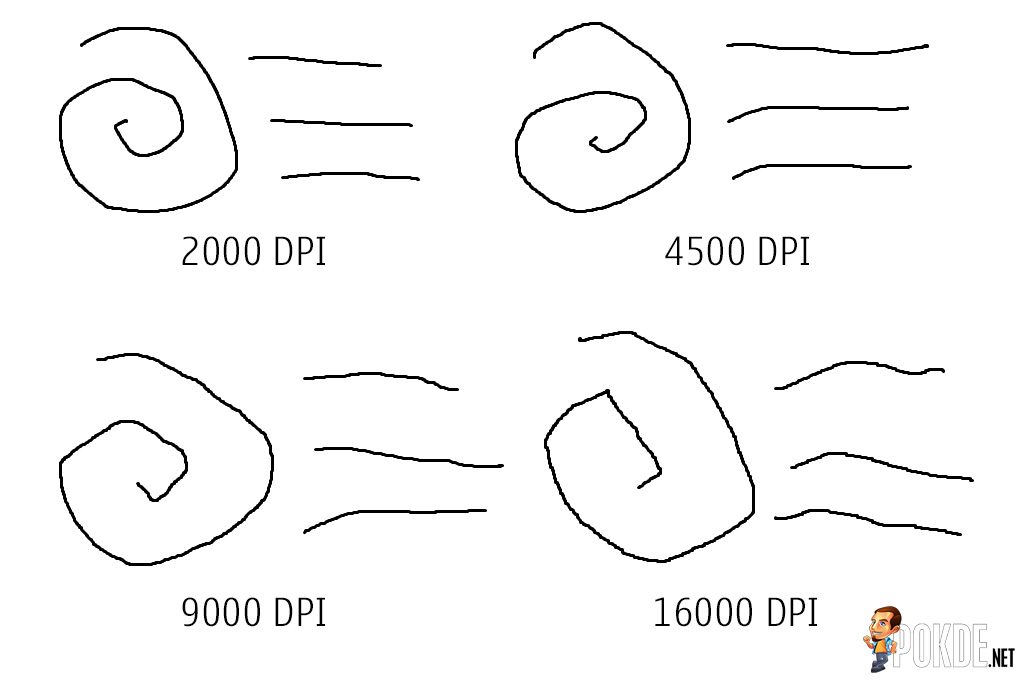 The world’s most advanced optical sensor definitely delivers! The tracking was smooth with the Razer Basilisk all the way up to 16000 DPI! At 16000 DPI, you may notice the sharp corners. However that isn’t due to angle snapping, but due to the fact that it is insanely sensitive and I just couldn’t a smooth circle with it. As you can see, the lines are still pretty wavy, so there isn’t an issue there. Testing it in Overwatch, I didn’t notice any issues, and the Razer Basilisk tracked tracked as well as I could aim. Lift off distance is tunable, and at the lowest setting, the Razer Basilisk will stop tracking at less than 1 CD’s height. 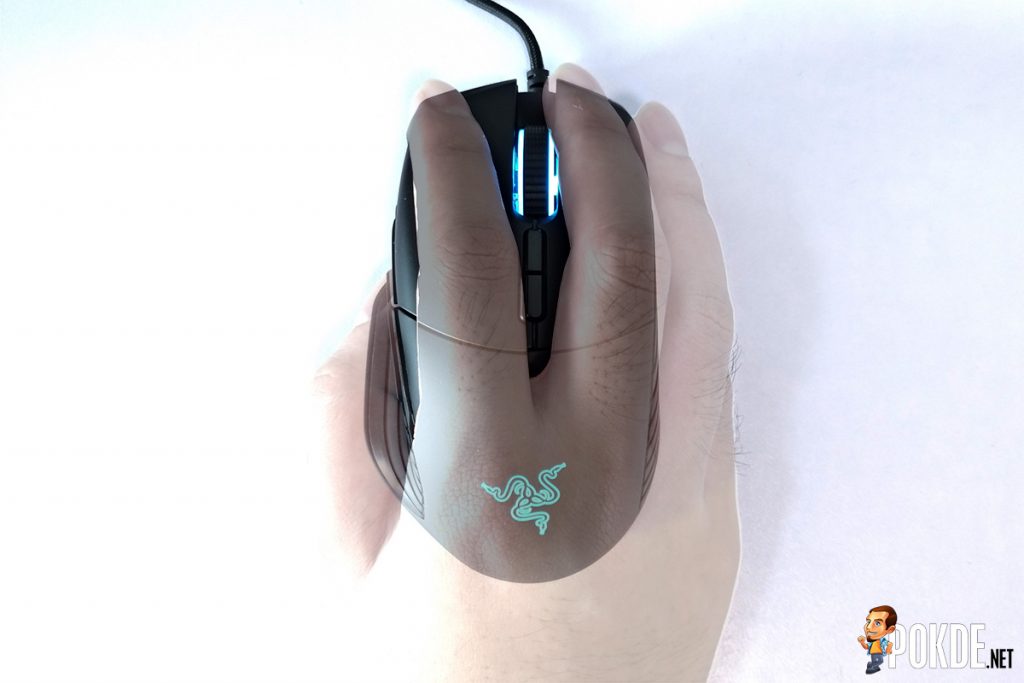 As you can see, the thumb has plenty of space while the right click’s scooped-out shape allows for a very comfortable resting place for the index finger. The overall grip of the mouse is very comfortable even over longer periods. The drawback of an ergonomic design is that left-handed gamers will feel left out, and while Razer used to release the Deathadder which was also ergonomic in both left and right-handed versions, they seem to have stopped the practice. We may never see a left handed Razer Basilisk. 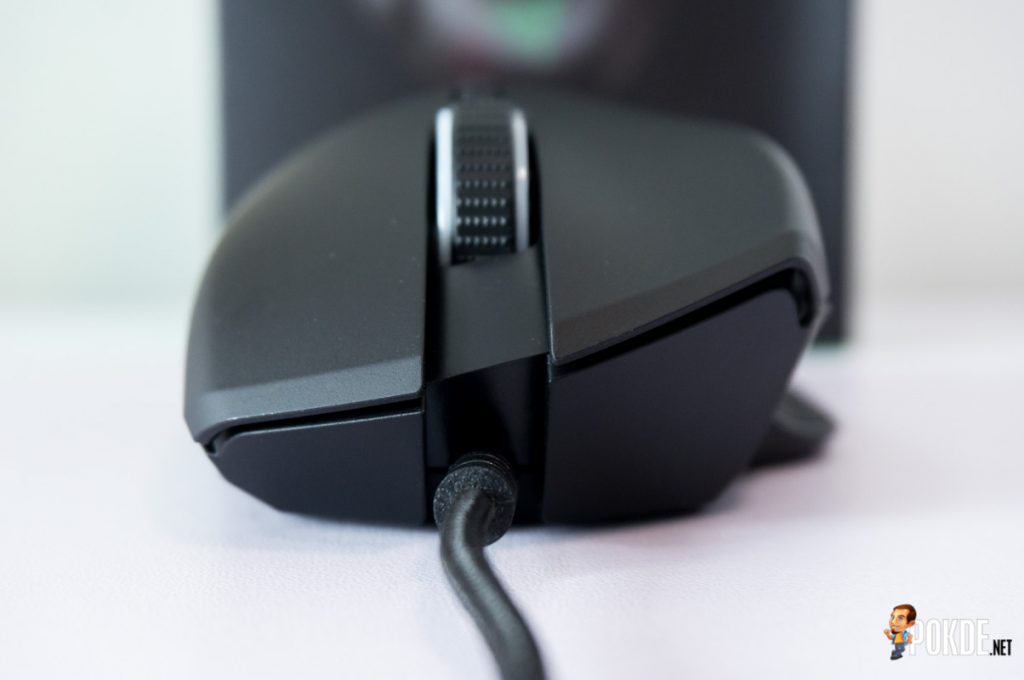 The two clickers are really responsive, with a crisp actuation accompanied by an equally crisp sound. The side buttons are clicky too, but have a bit too much travel. The DPI keys behind the scroll wheel are unremarkable, while the scroll wheel itself is quite stiff to press.

The Razer Basilisk is priced pretty high, with an SRP of RM289. You can get it for RM257 on Lazada, via the link below. I would say it’s worth the price, as this is a great mouse. The Razer 5G Optical sensor, sculpted ergonomic shape and clicky mouse switches and convenient clutch culminates in a mouse I really enjoy using. I wish there were more RGB lighting zones in the Razer Basilisk though. The Razer Basilisk’s customizability could be amped up with a weight tuning system too, but a lighter mouse is oftentimes preferable. For that, we believe the Razer Basilisk hits it right on the mark. We are awarding the Razer Basilisk our Gold Pokdeward for proving what Razer is capable of, when they put their heart to it! We aren’t too sure about their claim as the most advanced FPS gaming mouse though… 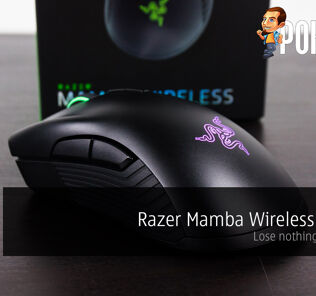