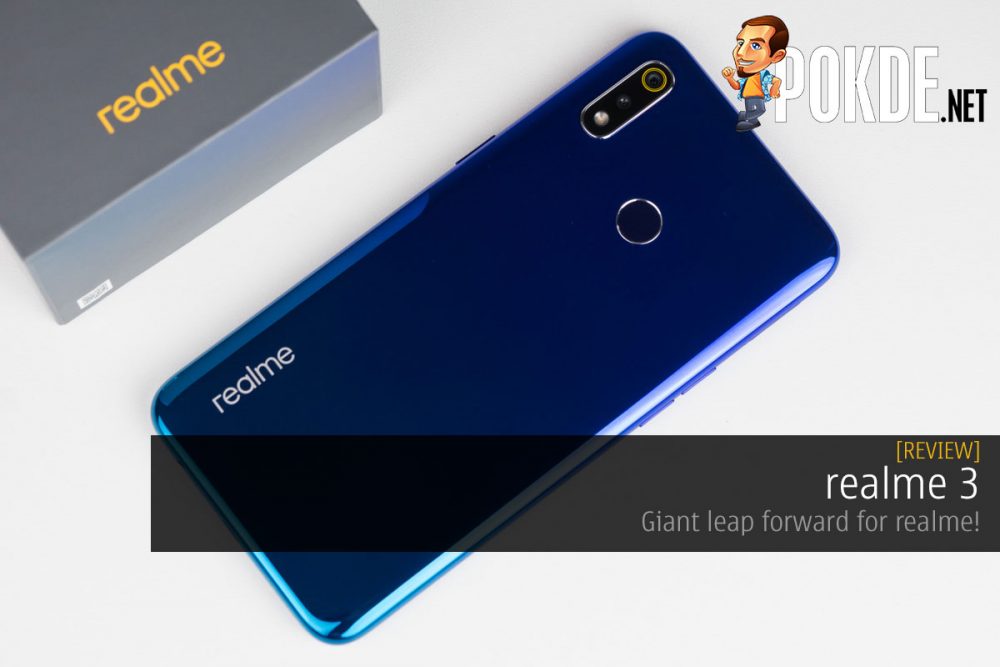 If you can look past the 720p display, the realme 3 is one wholesome smartphone.

The realme 3 is the successor to the realme 2, which unfortunately we didn’t review. Since the realme 2 was pretty similar to the realme C1 with some minor exceptions, we will be seeing if it was a true upgrade to the realme C1, or not. We do see a shift from Qualcomm to Mediatek which some may frown upon, but we will see if realme made a wise decision to go down that route. Without further ado, lets take a look at what realme has to offer with the realme 3. 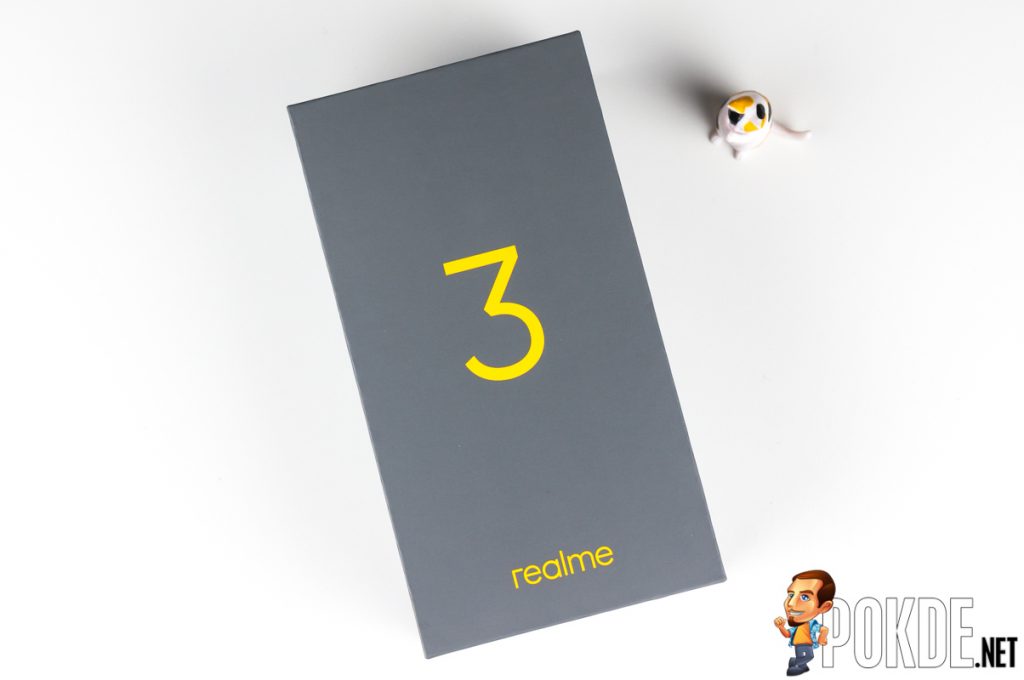 realme has changed up their identity, starting with the realme 3. Gone is the white-red color scheme. They now tout a grey package with yellow accents. 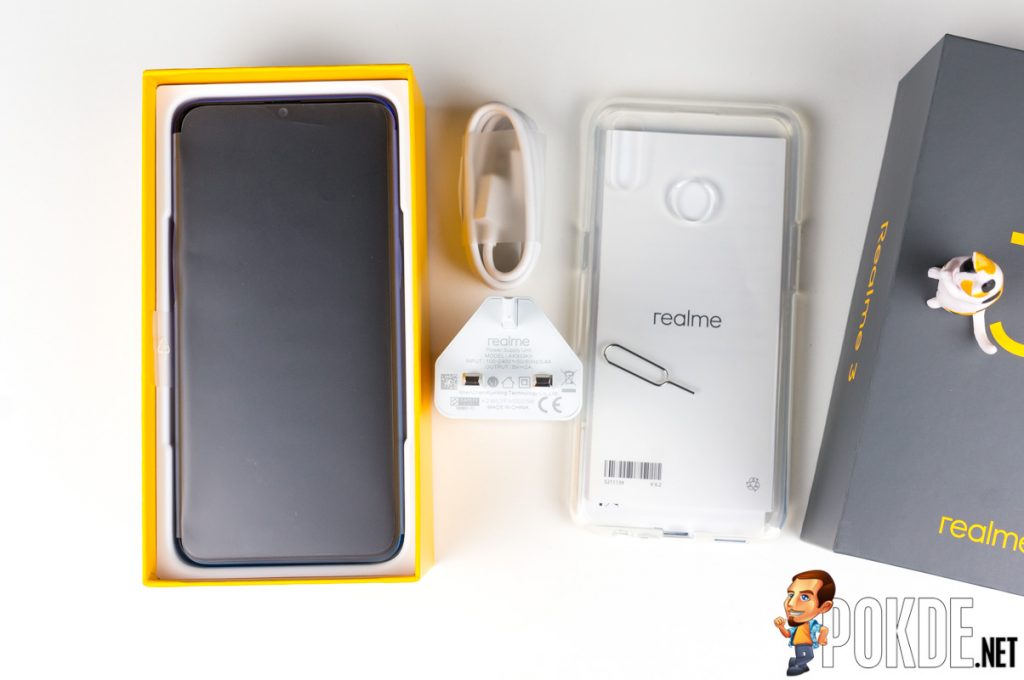 The inner tray is fully yellow. It somewhat reminded me of the POCOPHONE F1’s packaging. In the box is a microUSB cable, 10W charger, soft TPU case, the usual documentation, and of course, the phone itself. Nothing too grand here. Also this is the first time I see realme include a charger that sports a realme label, as previous models we reviewed had OPPO’s logo on their power adapters. 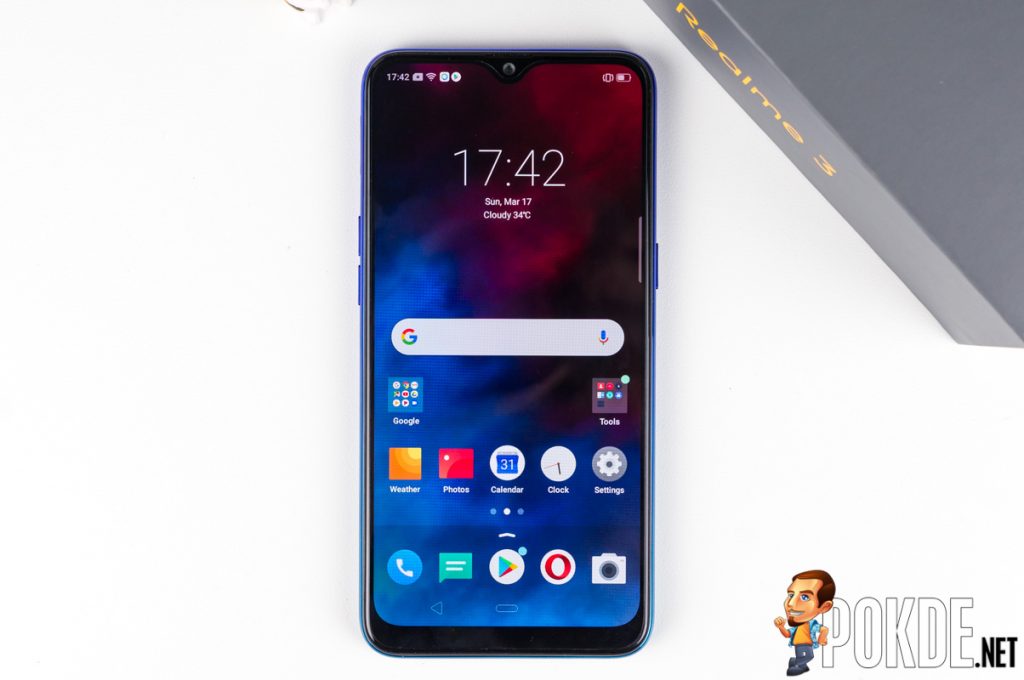 While the realme 2 and realme C1 came with conventional notches, the realme 3 follows in the footsteps of the more premium realme 2 Pro and proffers a waterdrop notch for increased screen-to-body ratio over its predecessors. There’s still a sizeable chin, but we aren’t gonna begrudge it for it. 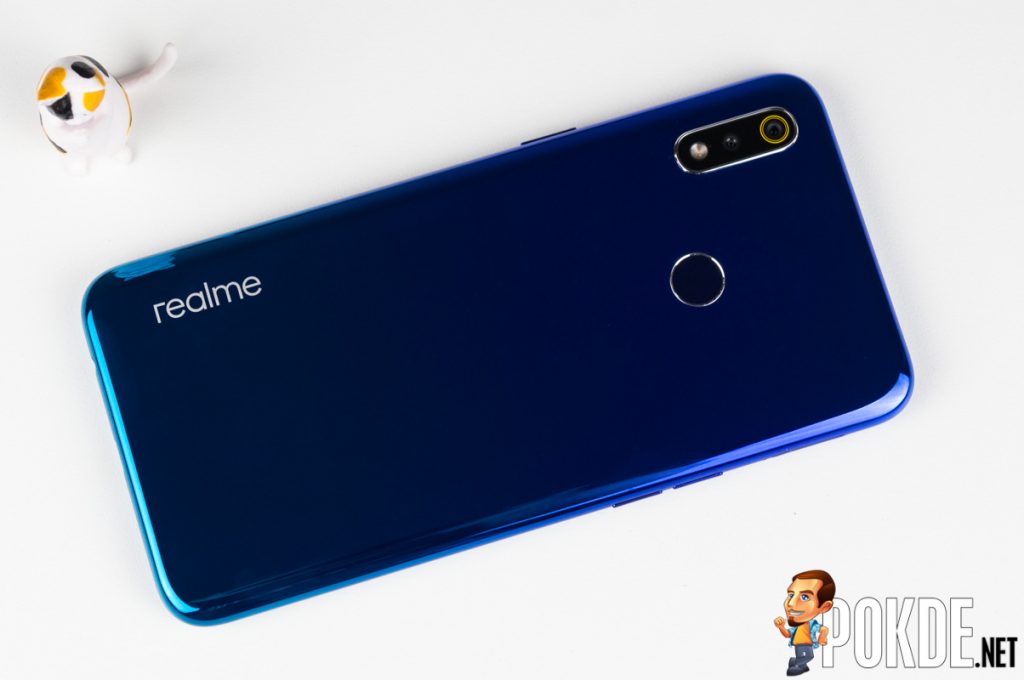 There is actually a very mild gradient here. The blue is a little bit lighter at the top, darkening and taking on a greenish hue towards the bottom side. The primary rear shooter comes with a nice little yellow ring around it, highlighting its camera chops. The position of the realme logo also makes it more noticeable when you are using the camera, rather than hidden under your hand. 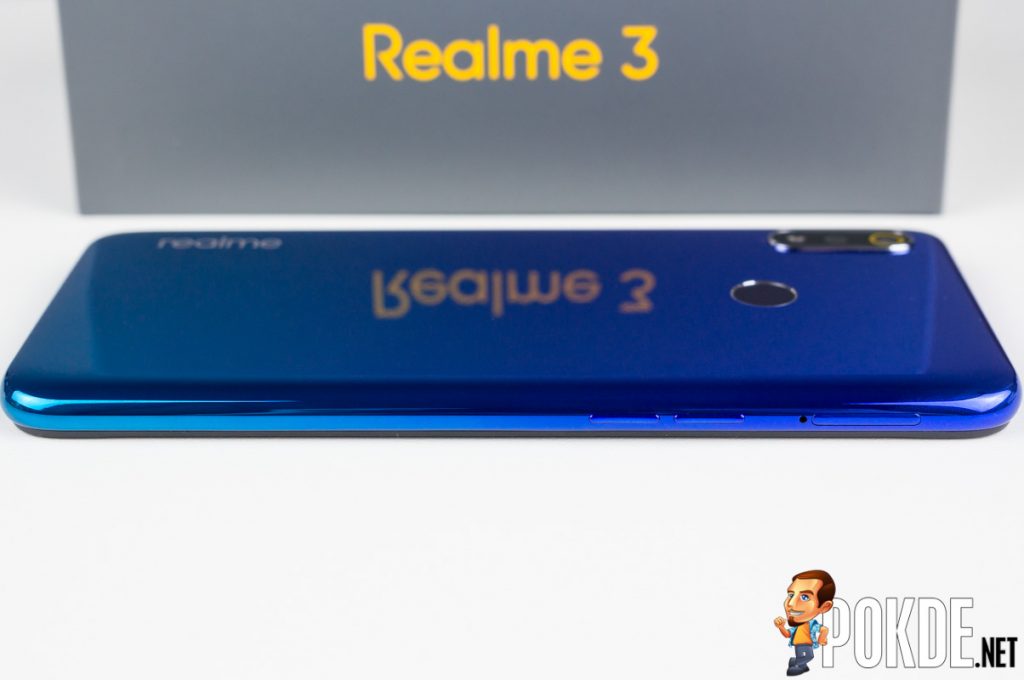 realme throws the volume rocker here on the left and SIM tray, and the power button on the right. As you can see, realme adopted a unibody design, which is a nice upgrade from the realme 3’s predecessors’ design which sports a separate frame and back panel. 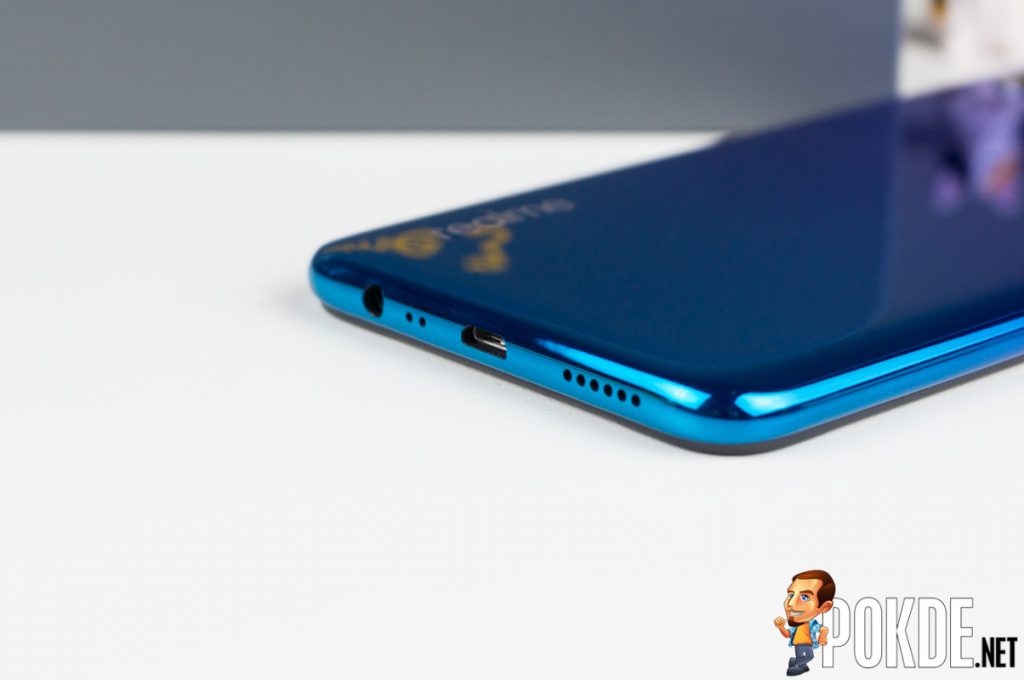 Here on the bottom is where you will find the loudspeaker and microphone holes. You also get a headphone jack and a microUSB port here. The latter is somewhat undesirable, especially as we enter 2019. 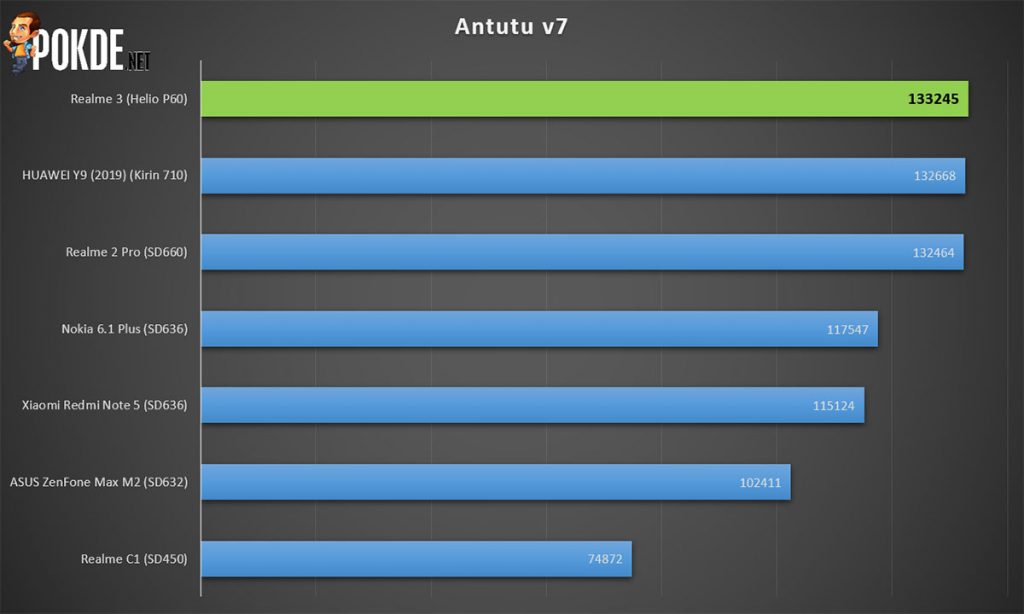 In Antutu, the realme 3 actually outperforms its predecessor, the realme 2 Pro. This comes as quite a surprising considering its price. 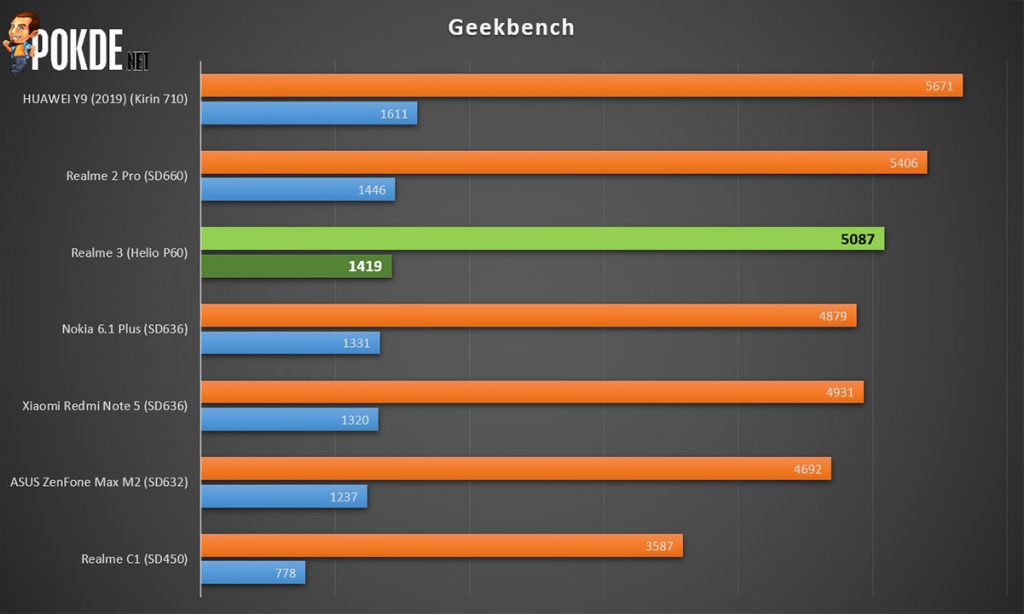 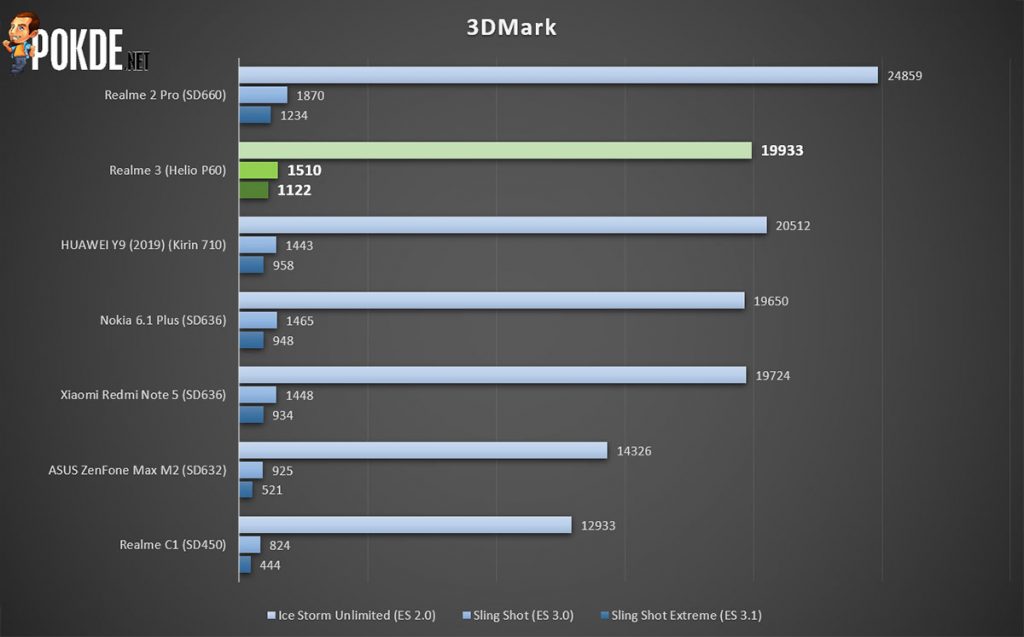 It then climbs over the HUAWEI Y9 (2019) in 3DMark with its superior GPU, but does not manage to overcome the much more powerful Adreno 512 in the realme 2 Pro. 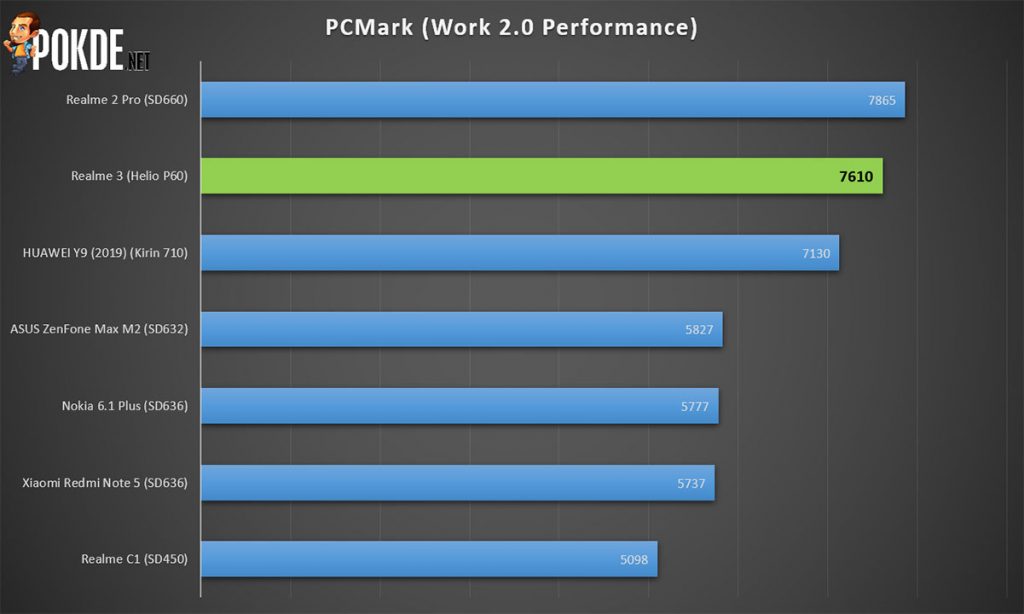 PCMark places it under the realme 2 Pro again, but the realme 3 does enjoy a rather fair lead over the rest of the devices in these charts. 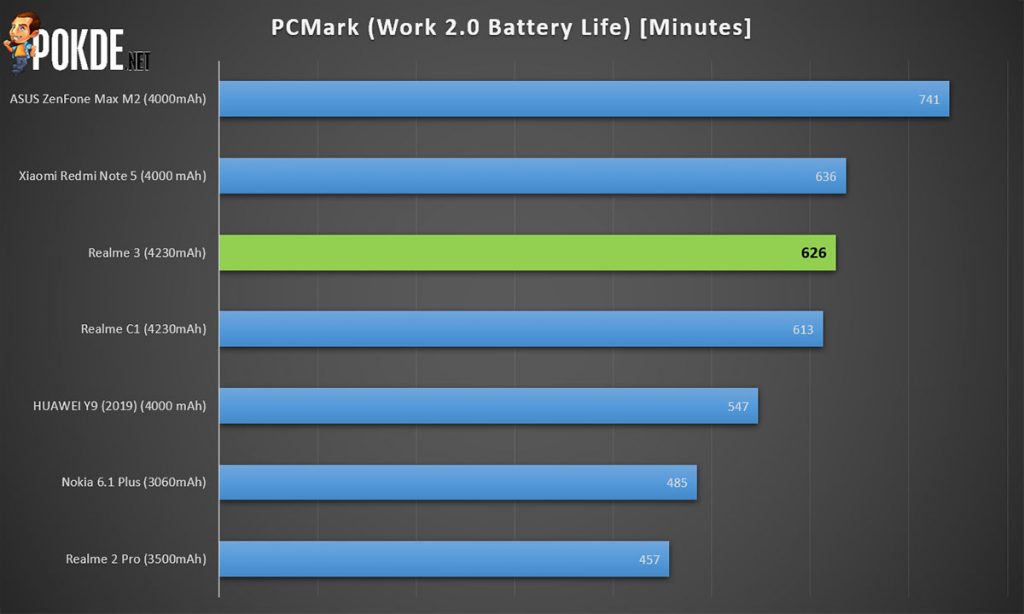 Interestingly, the realme 3 ekes out just a bit more battery life than the realme C1, despite sporting much better performance. A great showing for its MediaTek chipset and also realme/OPPO’s optimizations in ColorOS 6.

Benchmarks are one thing, but some devices can be totally different in daily use. I am glad to report that it is actually quite smooth. The 4GB RAM lends itself well to the general fluidity in daily tasks. Gaming isn’t exactly the realme 3’s strong suit, with PUBG Mobile clearly taxing the device with some visible delay after my input before the game responds. It doesn’t warm up too much though, which is good. 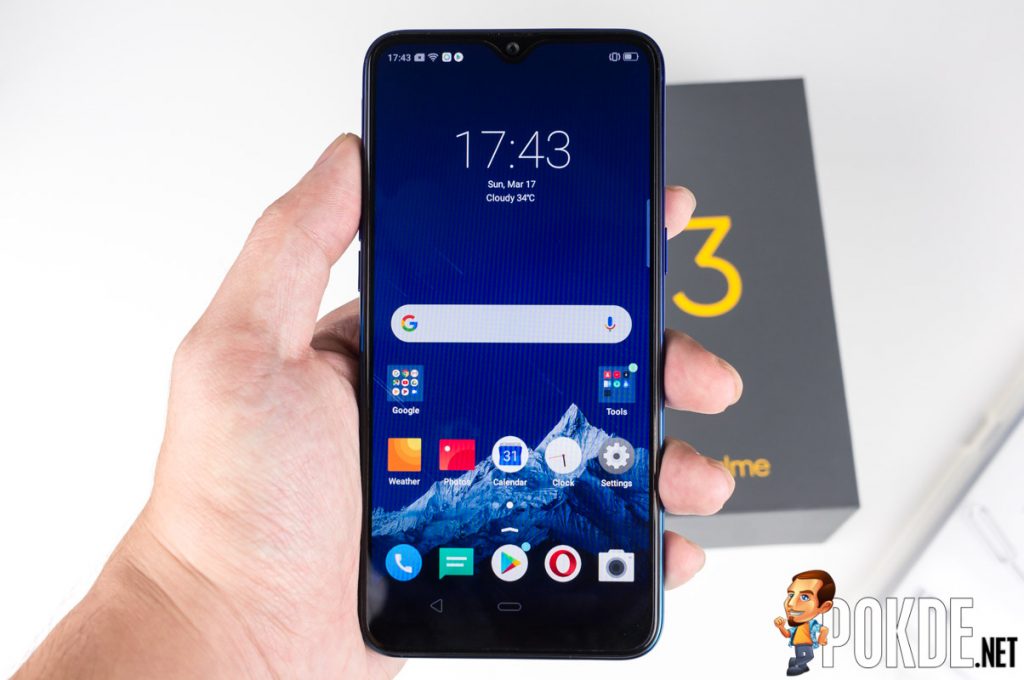 While the general performance of the realme 3 is quite good, it is really held back by its 720p display. The display is quite visibly less sharp when displaying texts, and does look quite grainy when dealing with generally white backgrounds. The realme 3 feels nice in hand, but can get icky really quick once it collects fingerprints. And it does so prodigally. The gradient back became completely smudged up in mere moments of me taking the realme 3 out of the box. That included soft case? You are gonna need it. 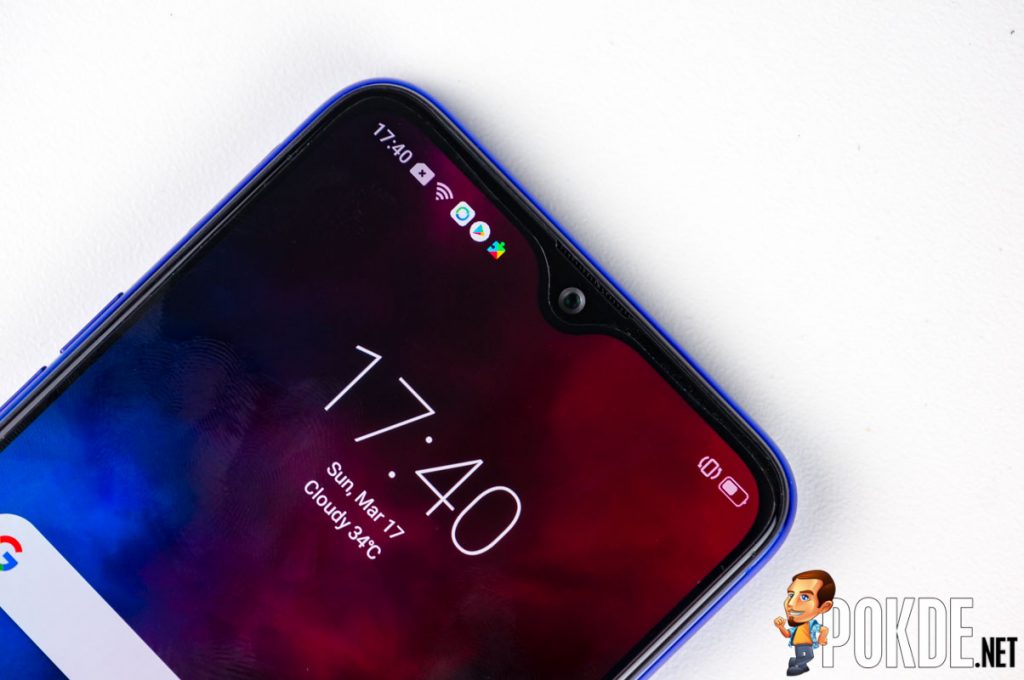 The tiny notch above the display lends itself to offer more area on the notification shade to show some notification icons. Finally, ColorOS supports notification icons in the status bar! Aside from being out of the way most of the time, it also takes selfies and allow you to use facial recognition to quickly unlock your device. The realme 3 does come with a pretty quick rear fingerprint scanner too, so you can choose to use that instead if you decide you need a bit more security.

In addition to now supporting notification icons, ColorOS 6 is a huge upgrade over ColorOS 5. For starters, there is an app drawer by default. Instead of the good ol’ three navigation buttons at the bottom, it now comes with a Pixel-esque pill button and a back key. Aside from Android One device, this might be the only way you get to enjoy that method of navigation. The notification shade is a touch more translucent now, and looks way more modern with huge, colorful toggles. OPPO did a great job with ColorOS 6, and the best part is that it is based on Android 9 Pie, so even an affordable device like the realme 3 isn’t left out of enjoying all the latest Android features, in addition to ColorOS 6’s. 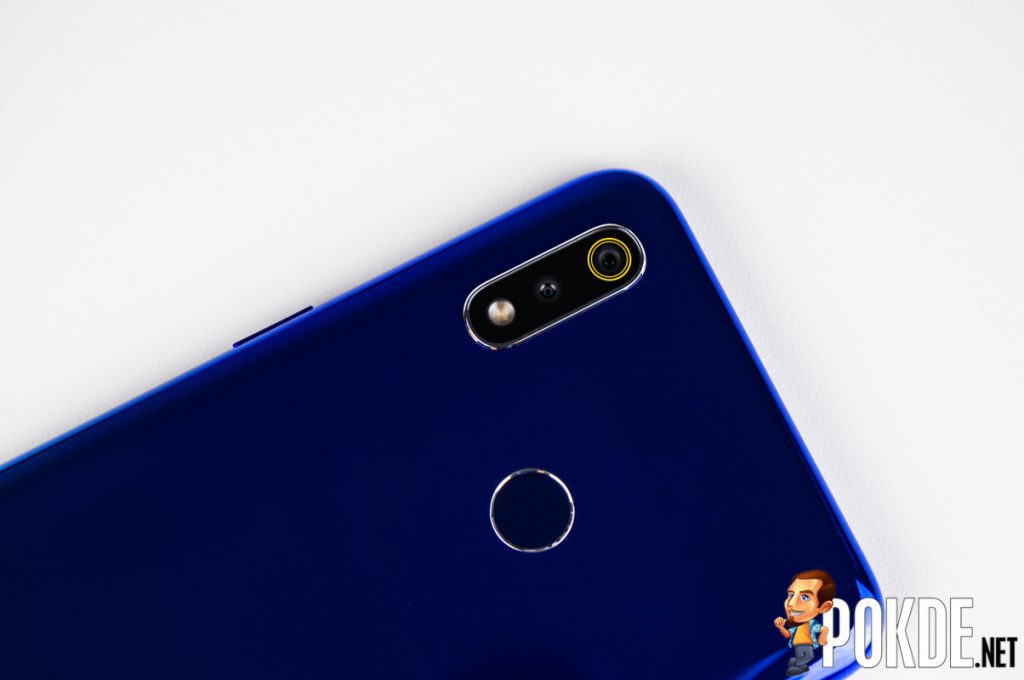 The camera on the realme 3 deserves a highlight because they added a number of features to it that rivals flagship deices. Nightscape and Chroma Boost. While the hardware itself won’t really turn heads, we are living in an era where the software optimizations of the camera on a smartphone is just as important as the sensor and lens construction to take a great photo. Or more importantly, a great photo that requires no effort. 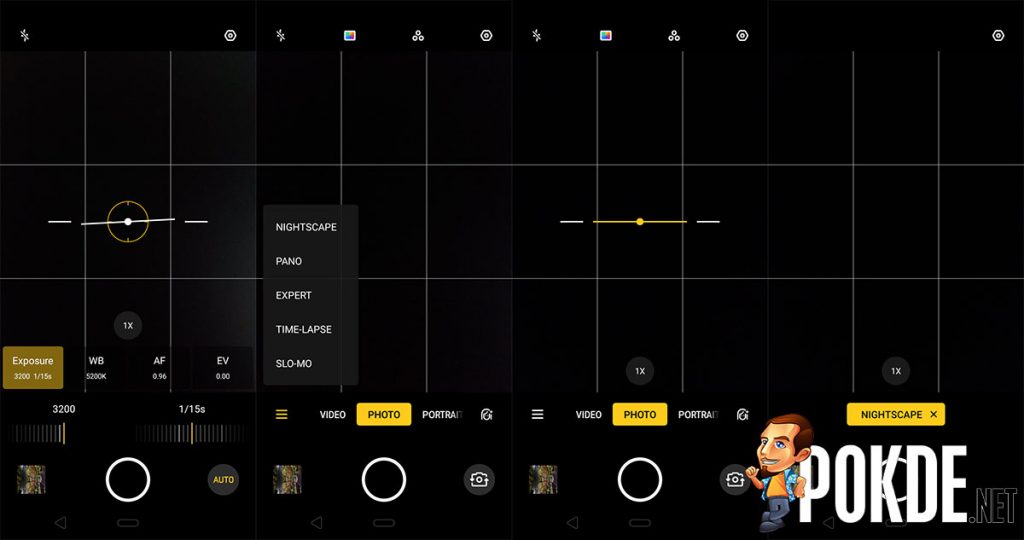 OPPO must have somehow fired all their previous staff working on their UI, as the camera UI is radically revamped too. It’s now much easier to switch between the modes, with a simple three modes available at first glance, and more modes hidden away into a sub-menu on the side. Gone are the times where you had to swipe frantically between the modes that are all at the bottom of the screen.

In terms of image quality, the realme 3 isn’t one for pixel peepers. Zooming in on images reveal some pretty intense sharpening applied. However Nightscape and Chroma Boost does turn out some amazing shots. Both need some time to process, so you will have to give it some time. Nightscape especially, as you will need to stabilize yourself for about 4 seconds as the realme 3 works its magic. It’s like Google’s Night Sight or HUAWEI’s Night Mode, taking more exposures and then combining them into one beautiful image. Due to the lack of OIS, the 4 seconds can be excruciating at times, with images coming out blurry due to just very minor camera shake. realme could probably optimize the EIS a tad for better stabilization. Chroma Boost adds some contrast and dynamic range to your shots with AI, making the images more appealing. You can check out the full-sized images on Flickr here.

Priced at just RM699, the realme 3 is up against some pretty serious competition. However the new camera features on the realme 3 are actually much better than what we have seen at this price range, and even better than some that might cost quite a sum more. ColorOS 6 is also much better than what we have seen on previous OPPO/realme devices, allowing the realme 3 to keep up with the times. The Helio P60 is a pretty strong chipset, and while it isn’t the best for gaming, it’s good enough at this price point. Battery life is really impressive with that big 4230 mAh battery.

The design is also very nice, albeit one which you will most probably obscure with a case due to the realme 3’s susceptibility to fingerprint smudges. As a whole, the low resolution 720p display is the only thing that’s holding me back from wholeheartedly recommending the device though, as it is quite visibly less sharp, and has no reason to be used in any device launched in 2019. Still, it is a great device if you are in the market for a smartphone that takes some pretty awesome shots without breaking the bank.

The realme 3 can be gotten from Lazada starting this 27th March, which is the day the realme 3 debuts here in Malaysia. Do check it out on Lazada via the following link:

Our thanks to realme Malaysia for providing the realme 3 for our review purposes.