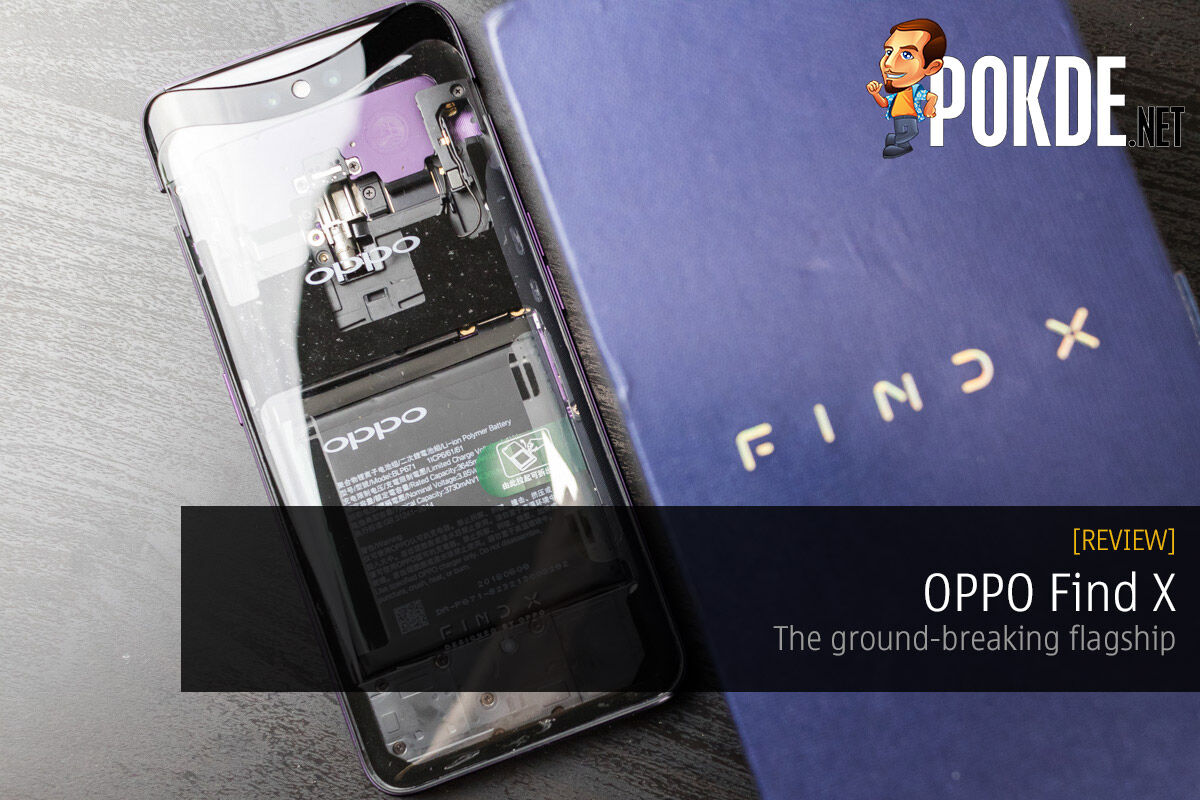 The OPPO Find X is a really cool device, but at this price point, it's quite hard to justify.

True flagships, or at least in my book, should have no compromises. Notches represent a compromise, cutting away a bit of the screen to put sensors and what not there. That’s why I never like notches. It’s nice to say that we are now in the post-notch era. Notches are what mid-range smartphones use. They can compromise on anything they want, they aren’t at the cutting edge anyway. But the OPPO Find X, is the first smartphone to truly be bezel-less. Now, that’s a flagship. 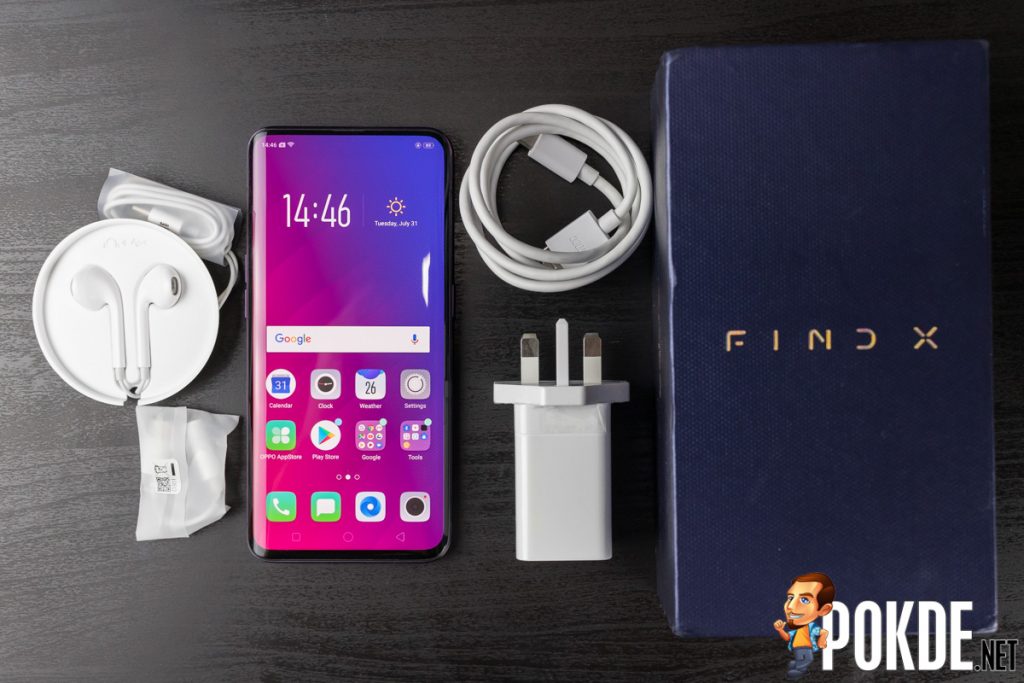 We must inform you that our unit is not a retail unit. Ours came with a clear back to showcase the motorized mechanism, but you can’t actually buy this anywhere. So with our unit we only received the device, the VOOC charger, USB Type-C cable, Type-C to 3.5mm adapter and some Earpod-lookalikes. Oh, and the SIM tray ejector pin. 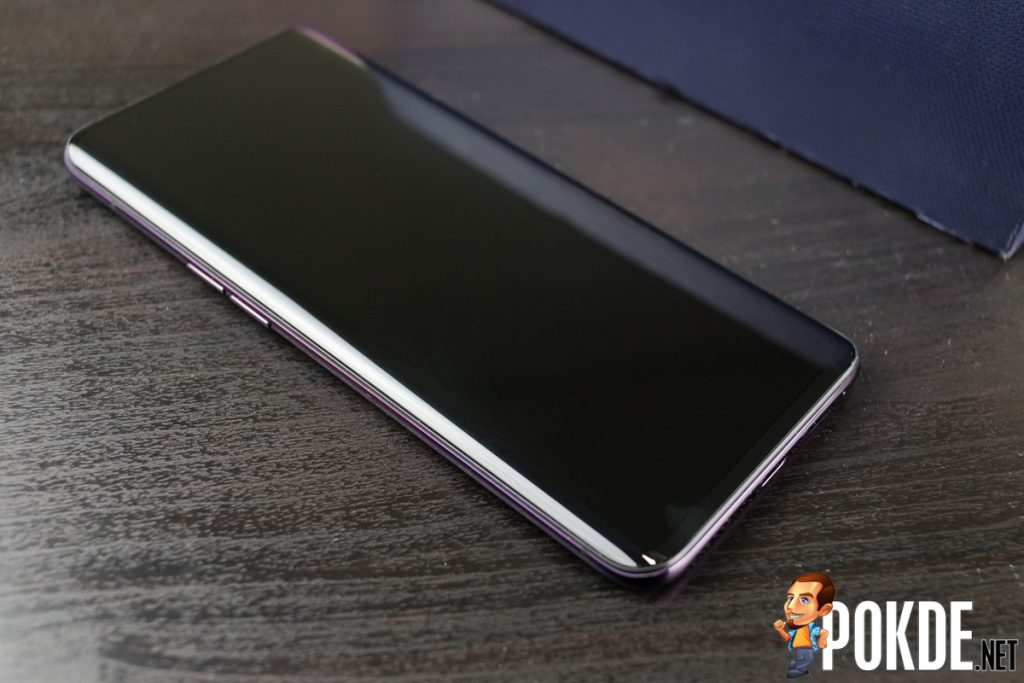 Taking a closer look at the device, we see, well, no bezels. The black bezels blend in very well with the dark AMOLED panel, and even when you look closely at it, you will see that the bezels are really tiny. Even the bottom bezel which is slightly larger on most “bezel-less” devices to make way for the display circuitry, is so minimal here. 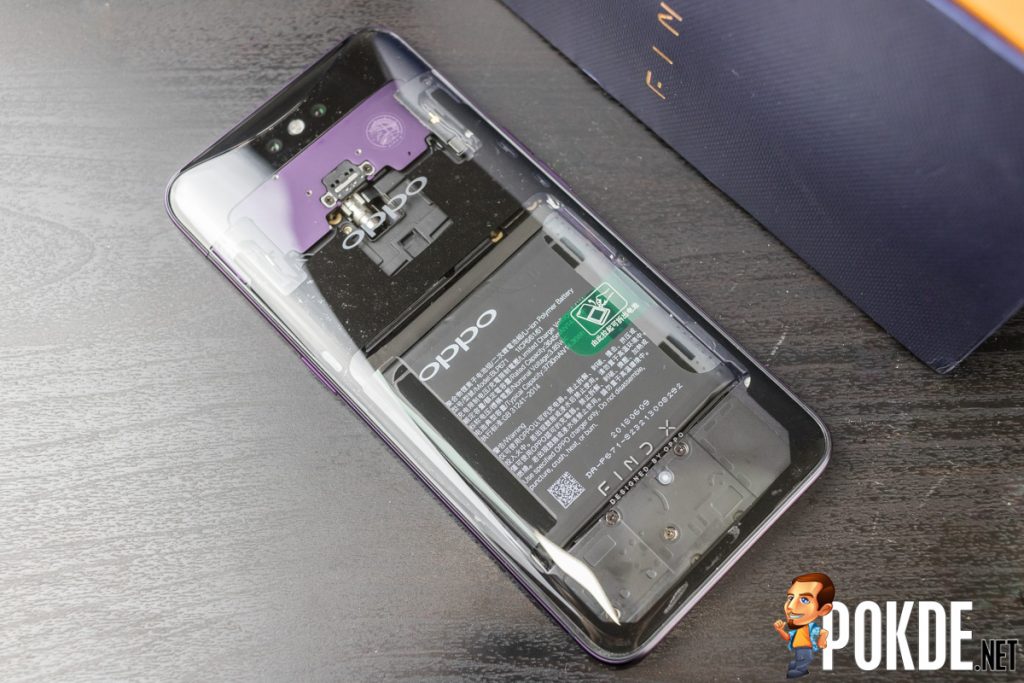 The back on our unit is clear, which gives us a good look at the motorized mechanism. Unfortunately the novelty of the clear back quickly dies off once you carry it around. Pocket lint gets under the glass panel easily, and definitely destroys the magic of the clear back. While you may have wondered what happens when dust gets between the popup assembly and the back panel, you need not worry because the purple thingy you see keeps the dust from reaching the motor. 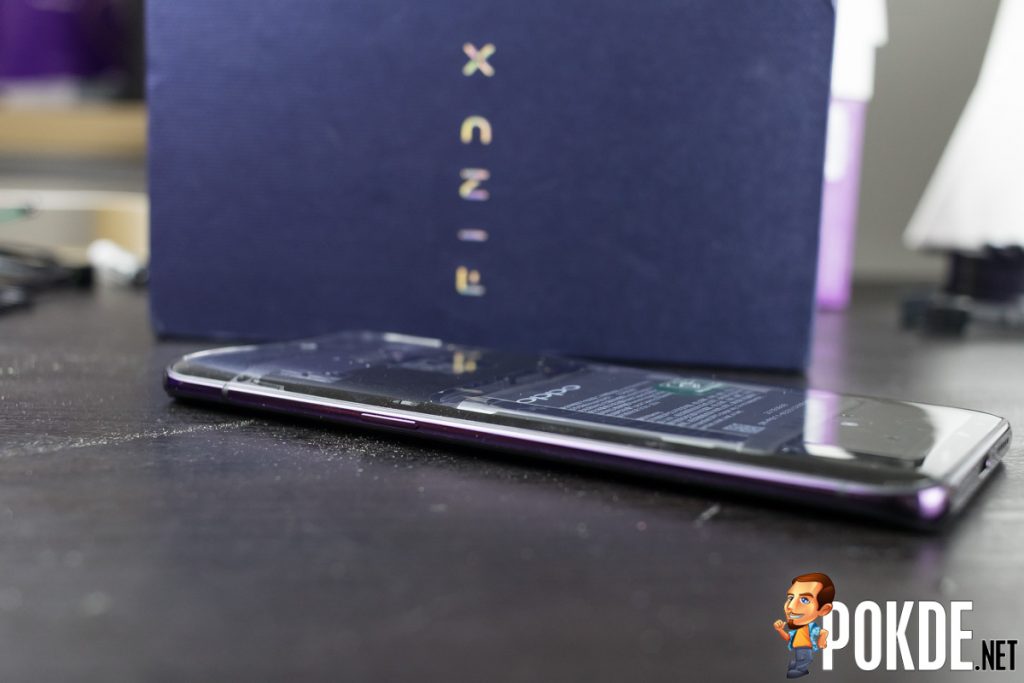 On the right side you will find the power button, while over on the left OPPO has the volume buttons. This configuration can be pretty jarring for anyone coming from pretty much any other Android smartphone. There is no 3.5mm jack, so you only get a USB Type-C port at the bottom. And because the sides are so slim, the SIM tray slots into the bottom where its slightly thicker.

The camera assembly here may seem very familiar. That’s because it is using the same setup as the OnePlus 6, but behind a slower aperture of f/2.0 versus the f/1.7 in the OnePlus. A smaller aperture usually means poorer low light performance, which we will check out pretty soon. The rest of the hardware is pretty much standard for a flagship device, and we really dig the big battery in such a slim body. 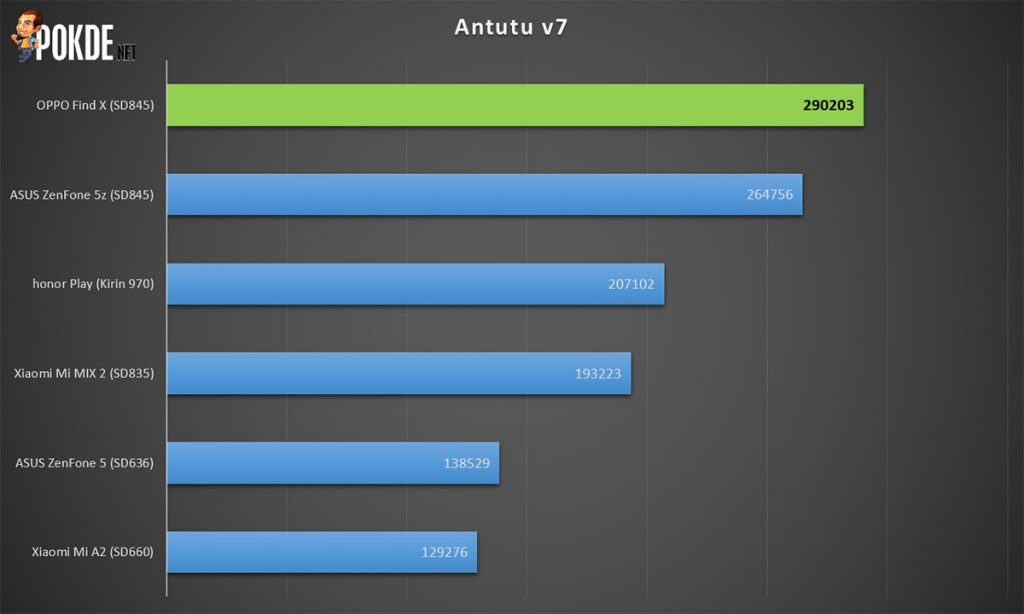 The OPPO Find X places first in our Antutu chart, besting the ASUS ZenFone 5z with the same chipset. In Geekbench it slots in below the ASUS ZenFone 5z, with slightly lower single core performance and a rather significantly lower multi-core score. 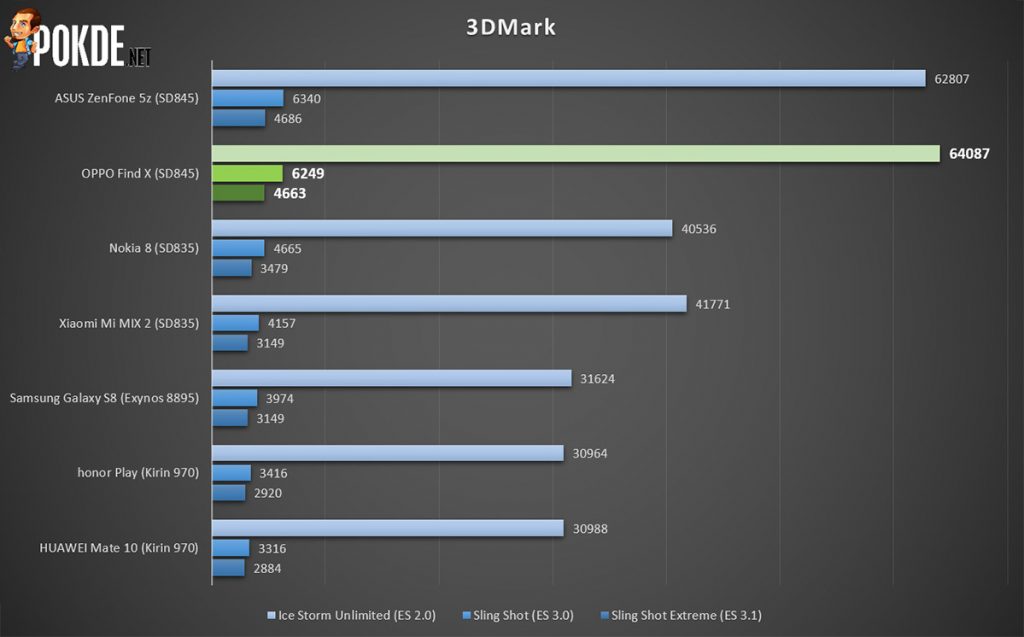 Here in 3DMark we see the OPPO Find X just a bit slower than the ASUS ZenFone 5z. It does make a comeback in the Ice Storm Unlimited run, which means that the difference between the two devices are negligible. 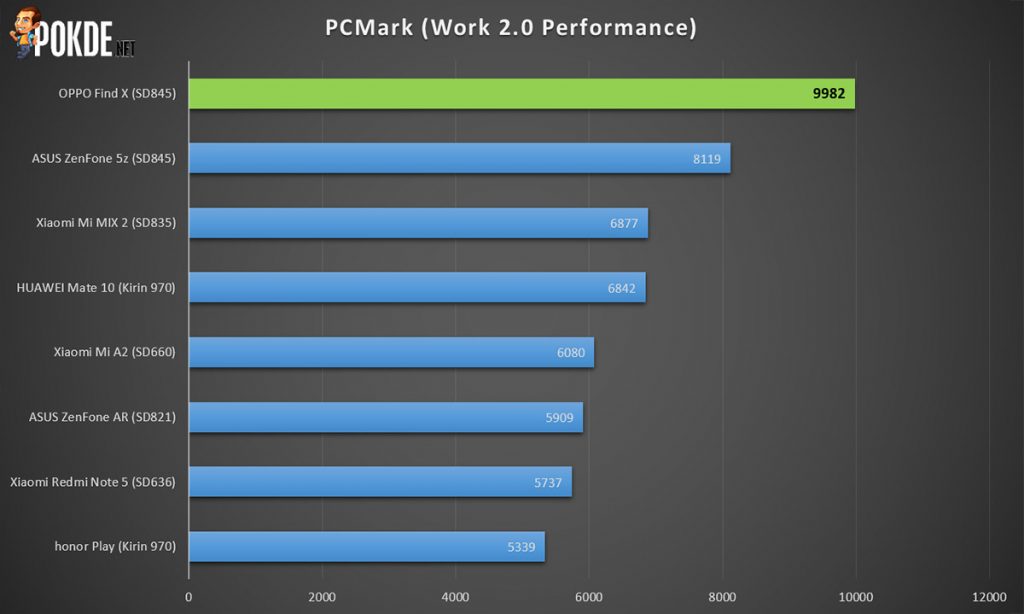 The OPPO Find X seems like a major workhorse, scoring top marks in the Work 2.0 benchmark. 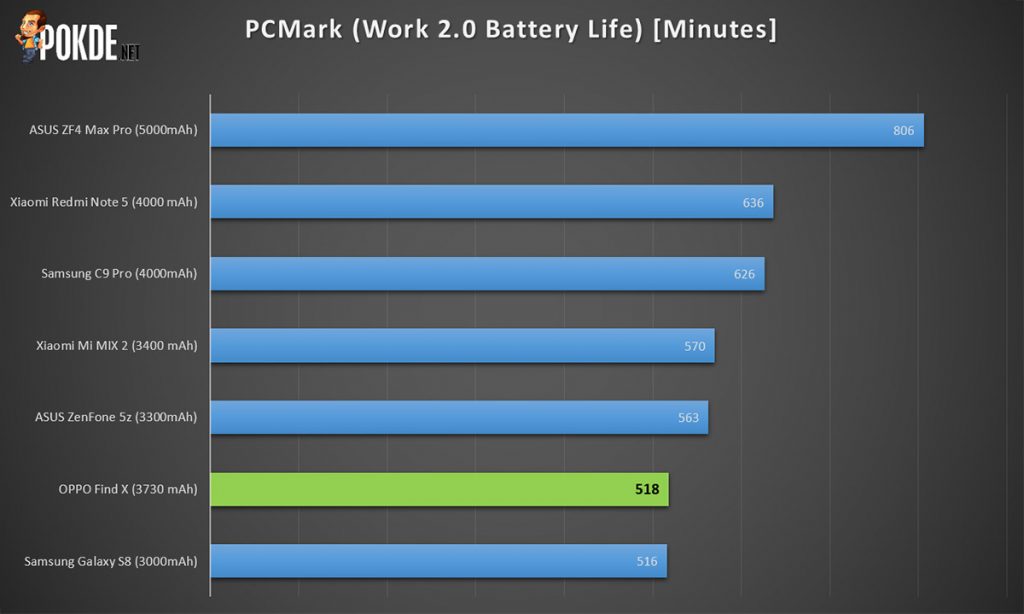 Battery life of the OPPO Find X is good, but not great. This can be attributed to the large AMOLED panel, and the predominantly white UI elements used in this benchmark. AMOLED displays use the most energy displaying white, and it shows here.

When using it as my daily driver, I managed to squeeze out over 22 hours of use, before it hit 15% battery remaining. The battery juiced up by 47% in just 30 minutes. With the large-ish capacity of the battery, being able to regain so much battery in just 30 minutes is really impressive. That’s nearly half your battery there! 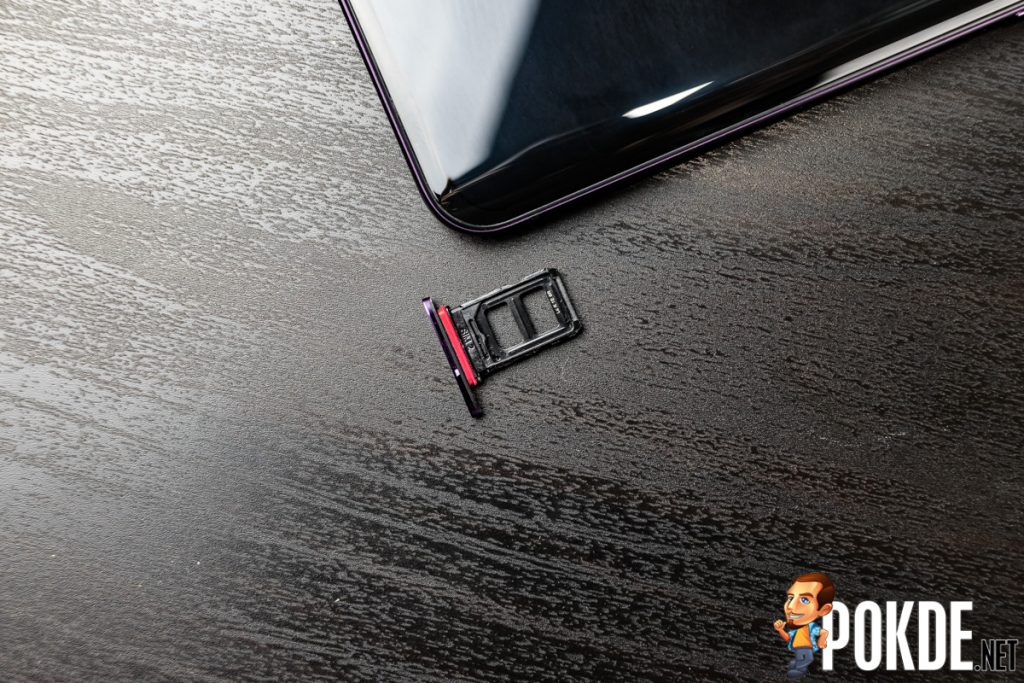 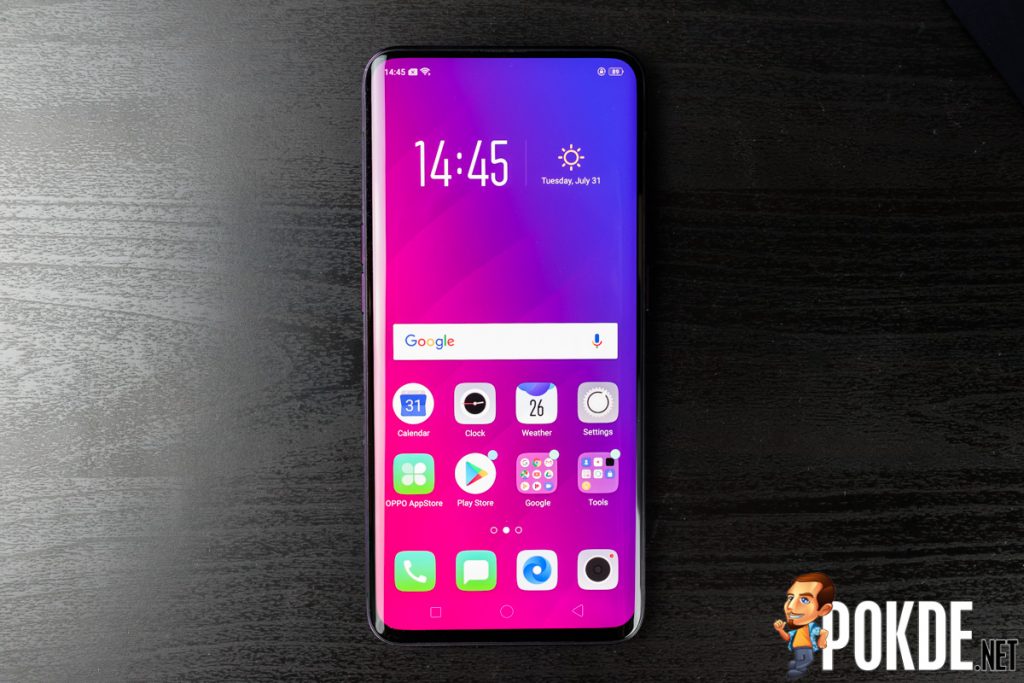 The first thing you will notice about this device is the lack of notches. Which is great. And the feel in hand is pretty exquisite, with no camera hump or fingerprint sensor getting in the way of the smooth glass surfaces on both the front and back. Despite it being 9.6mm thick, it feels much thinner thanks to the curved glass panels and thin aluminium frame.

The popup mechanism is also amazing. While I had my doubts when it came to having to wait for a motor to push up the face detection system before I could unlock the OPPO Find X, it was surprisingly seamless. And the speed of the detection is as fast as it gets. You can have it like how the fruity brand does it, let it scan your face before you swipe up to unlock, or let it immediately unlock when it detects a recognized face. I opted for the latter, and I dare say I am ready to move on from fingerprint scanners.

The software isn’t nearly as impressive though. There are nice things like the Panoramic Light notifications which look amazing in dark environments, and the UI is simple enough for most users, but the rest of ColorOS 5.1 just looks outdated. The clean, bezel-less front is marred by the fact that OPPO’s gesture navigation system is clunky. The curved bezel-less display actually made it hard to swipe from the bottom without accidentally touching the screen somewhere else. I found it really hard to get used to, and I went back to using the standard navigation buttons. Before you guys bring out your pitchforks, I got used to Xiaomi’s gesture navigation in just a matter of hours, and HUAWEI’s home button navigation gestures in a similar time frame. So when I can’t get used to OPPO’s gestures in half a week’s time, I would say it isn’t entirely my fault. 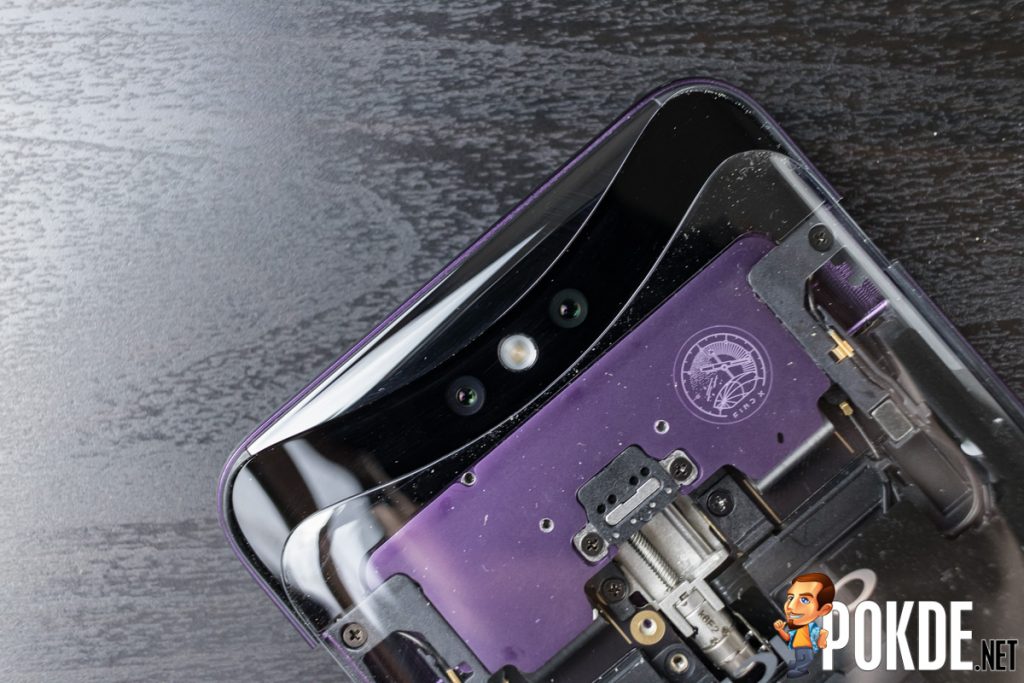 Moving on, the hidden cameras — which aren’t on our unit because we got the clear one — rise up to the occasion quickly enough. Not instant quick, but just fast enough so that you won’t be missing your shots. They slide smoothly out, and slide back in when you are done. It’s also probably because of the fact that they have be inside the body rather than protruding that OPPO had to compromise with a slower aperture despite sharing the same sensors with the OnePlus 6. 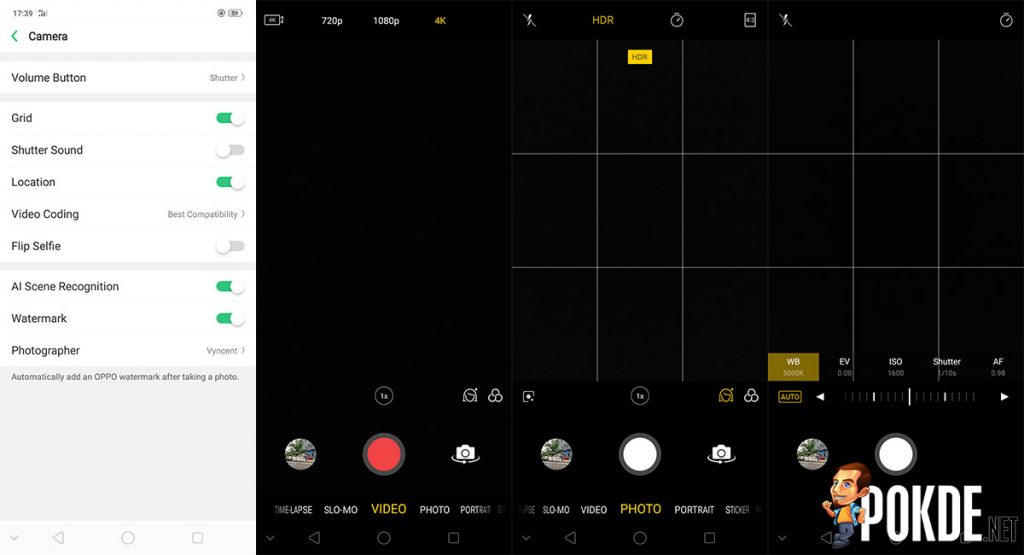 The camera UI is strongly influenced by a certain non-Android smartphone, and that means having to swipe through a long list of modes before reaching the Manual mode which is located at the end of the list. And for some reason, OPPO has the camera settings hidden in the main Settings. I do like the very customizable watermark, where I could add my own name to the watermark. Cool. But if I wanted to remove the watermark, it meant having to navigate through Settings to turn it off.

Images turned out decent enough. For a flagship priced at this price range, I must say I was expecting better from the OPPO Find X. HDR images took a ridiculously long time to process, which was very surprising considering that the device has the fastest chipset and fastest storage that any Android smartphone can have. And yet, it takes 2 seconds before I was ready to take the next shot. Check out our Flickr page for the full-resolution images. 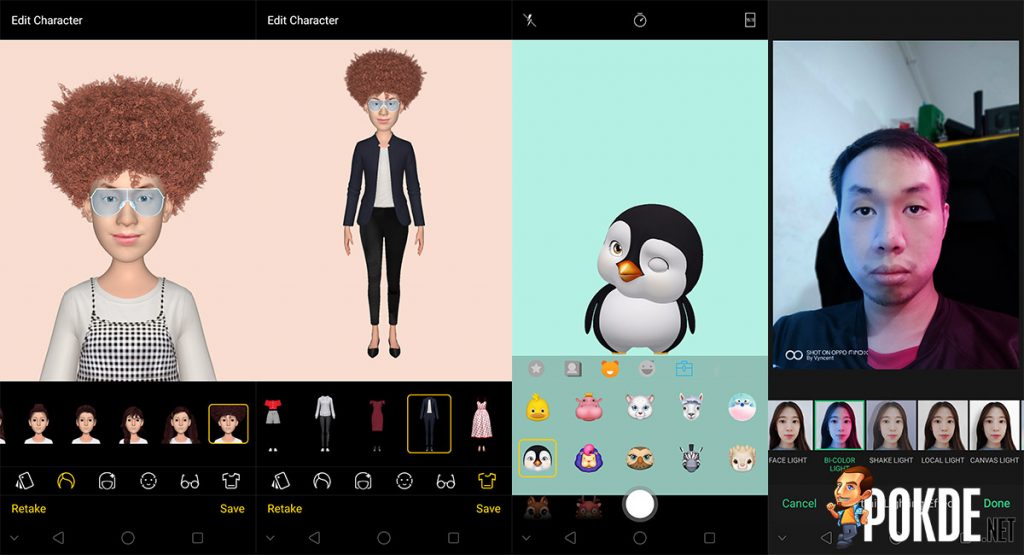 Someone who is more interested in selfies might find the OPPO Find X a much better device though, with the variety of portrait lighting effects offered for selfies as well as portraits taken with the rear cameras. You can even tweak the portrait lighting after you save the shot, which is really cool just in case you decided you want a different look to upload the next day. There’s also the Omoji feature, which allows you to create an avatar based on yourself or just use the animals that will mimic your facial expressions. By now you should have discovered the inspiration behind this feature, but we will leave you with that. 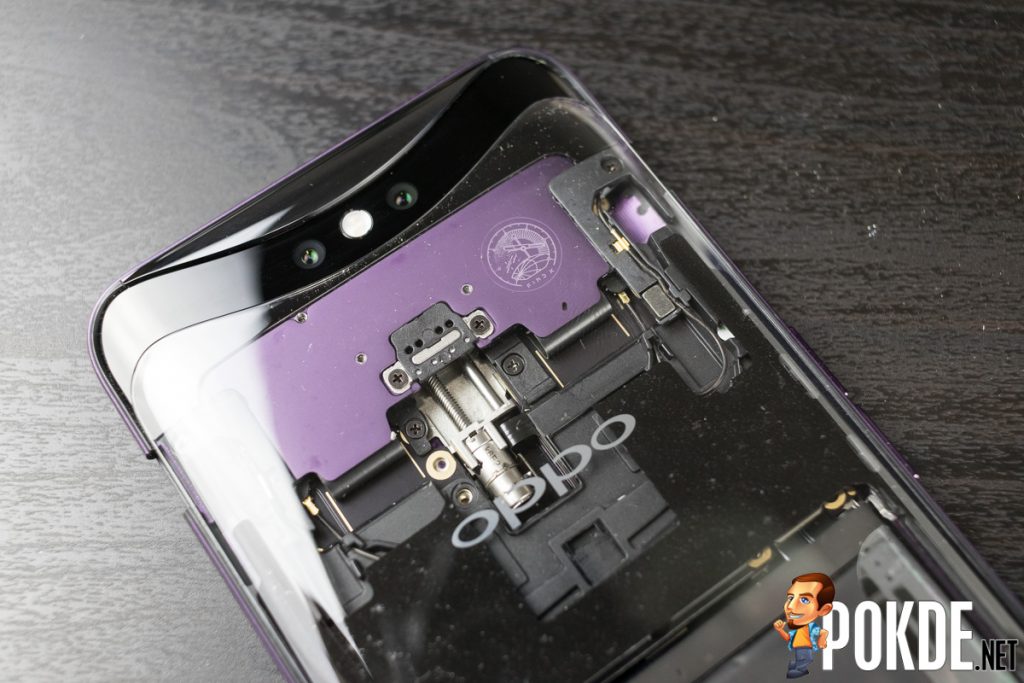 Is the Find X worth the RM3699 OPPO is asking for? Only if you must be the first to experience the latest tech. The curved bezel-less display is surreal to behold, and the popup facial recognition is a conversation starter for sure. But the software is a major letdown in the face of such modern hardware. Clunky UI, slow HDR processing are just a few of the OPPO Find X’s drawbacks. That’s before we look at the hardware weaknesses like the lack of wireless charging or waterproofing, which are in most recent flagships in this price range.

To support our operations, check out the OPPO Find X on Lazada via the link below: