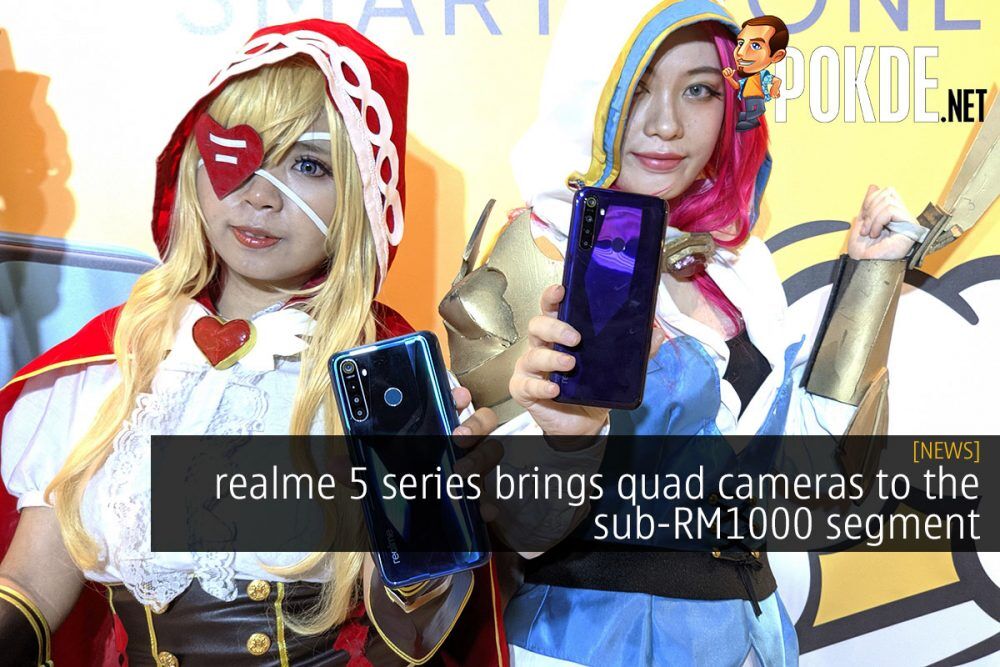 The realme 5 series has arrived here in Malaysia, with a massive leap in specifications, improved designs, while maintaining the same affordable prices. Interesting enough?

For starters, let’s take a look at the realme 5. This affordable smartphone starts from RM599, offering some of the best specifications we have seen in the price bracket yet. It touts a large 6.5″ FHD screen, perfect for media consumption or gaming. Under the hood is a Snapdragon 665 mated to up to 4GB RAM and 128GB storage. The battery is what I find most noteworthy though, with a massive 5000 mAh battery, which should promises battery life for days.

In line with realme’s #LeapToQuad motto, the realme 5 also packs a quad-camera setup on the very shiny back. It features a 12MP primary camera, an 8MP ultra-wide angle shooter, a 2MP macro camera and a 2MP depth sensor.

Here are the realme 5’s specifications:

The higher end of the duo, the realme 5 Pro touts an even beefier camera setup. It marks the first time realme is offering a 48MP primary camera here in Malaysia. As the successor of the realme 3 Pro, there’s also some serious hardware under the hood.

You get a Snapdragon 712 paired with 8GB RAM and 128GB UFS 2.1 storage. That’s right, realme has finally returned to UFS 2.1 storage with the realme 5 Pro.

realme put a smaller 6.3″ FHD+ screen and also a smaller 4035 mAh. It does however have VOOC Flash Charge 3.0 support, delivering 20W charging to the realme 5 Pro. Also worth noting is unlike the previous realme 3 Pro, realme is using a USB-C port here.

These are the realme 5 Pro’s specifications:

realme Malaysia will be offering the realme 5 Pro starting 10th October, while the realme 5 will come in a week later on 17th October.

Also, if you get the realme 5 Pro on 10th October on Lazada, you will net yourself a pair of exclusive wireless realme Buds wireless, tuned by none other than Alan Walker!

Pokdepinion: The realme 5 Pro’s UFS 2.1 storage is nice to see again in this price segment!