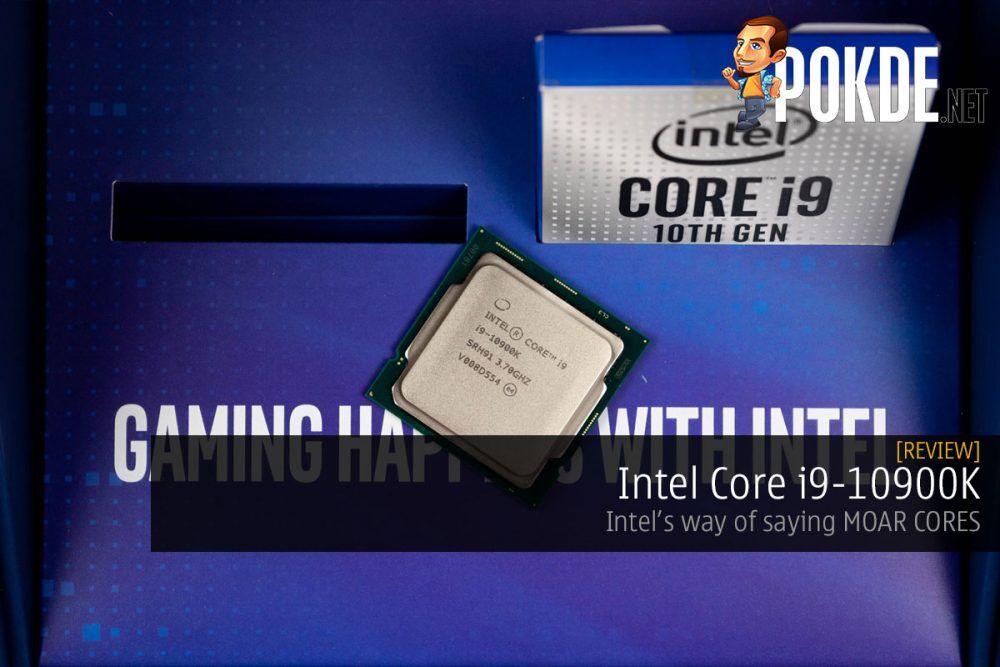 Intel went all out with the 10th Gen Intel Core processors, pushing the Skylake microarchitecture and 14nm process node to the limits with more cores and higher clocks than its predecessors. The Intel Core i9-10900K is Intel's answer to AMD's flagship Ryzen 9 processors, with ten cores running at up to 5.3 GHz. Is it a good option for gamers though?

The Intel Core i9-10900K is faster and better than its predecessors, but who is it for exactly? 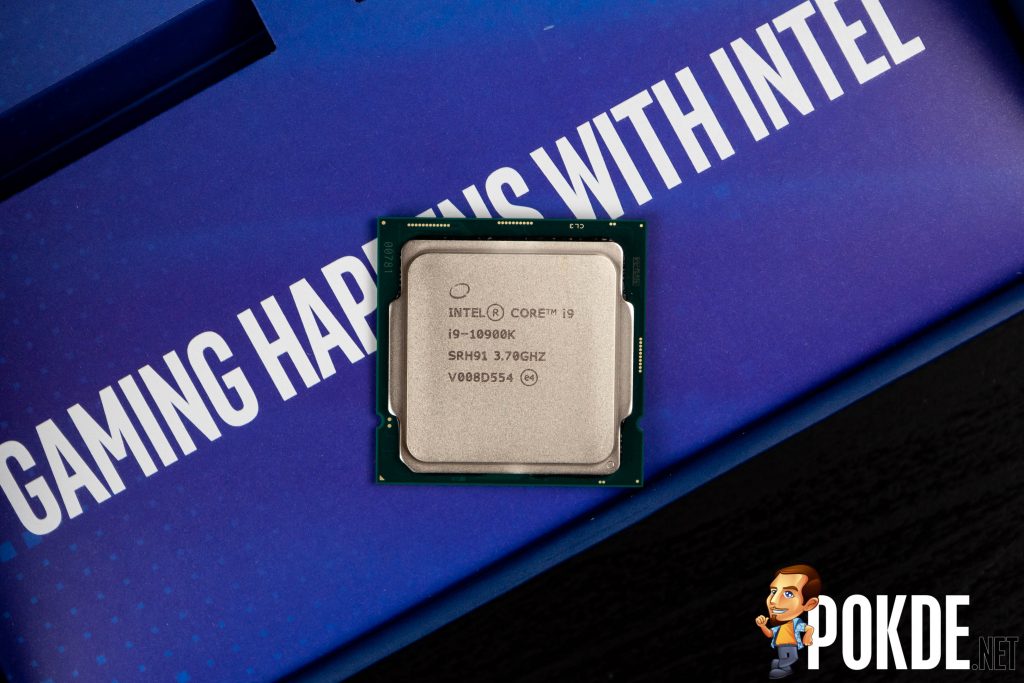 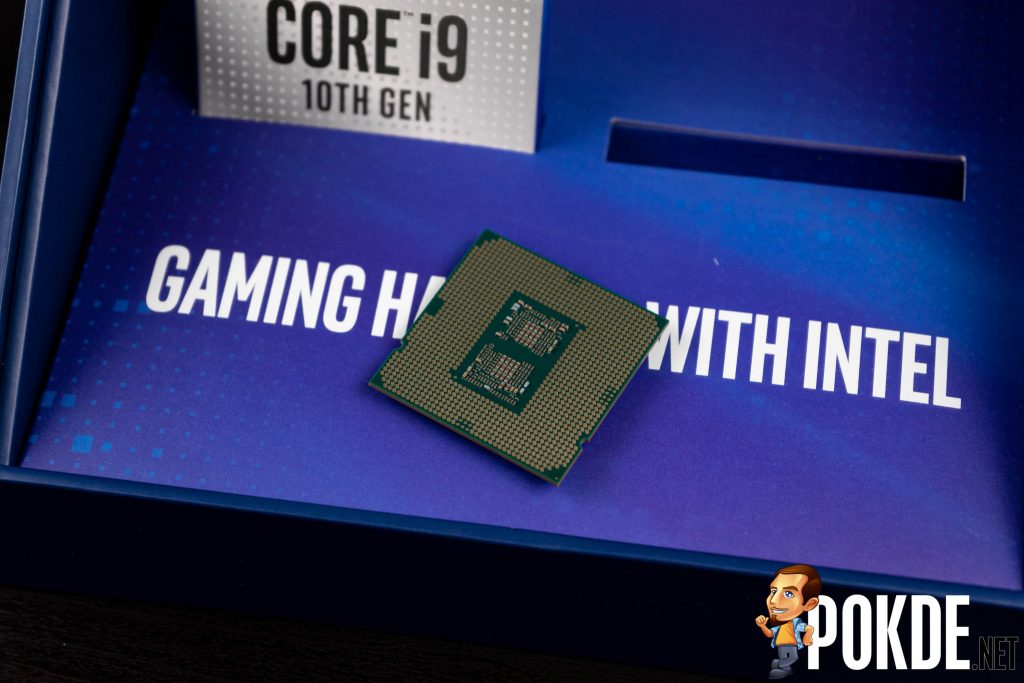 On the underside is the 1200 pads that will contact the 1200 pins in the LGA 1200 socket. Of course, we didn’t count them. There’s a significant amount of SMD components packed into the center area of the socket.

For the stock settings, we set the BIOS to enforce all of Intel’s limits, and all the voltages are auto. The overclocked results are obtained by setting the multiplier to 51 and manually entering 1.355V for Vcore. Now, let’s take a look at the performance data. 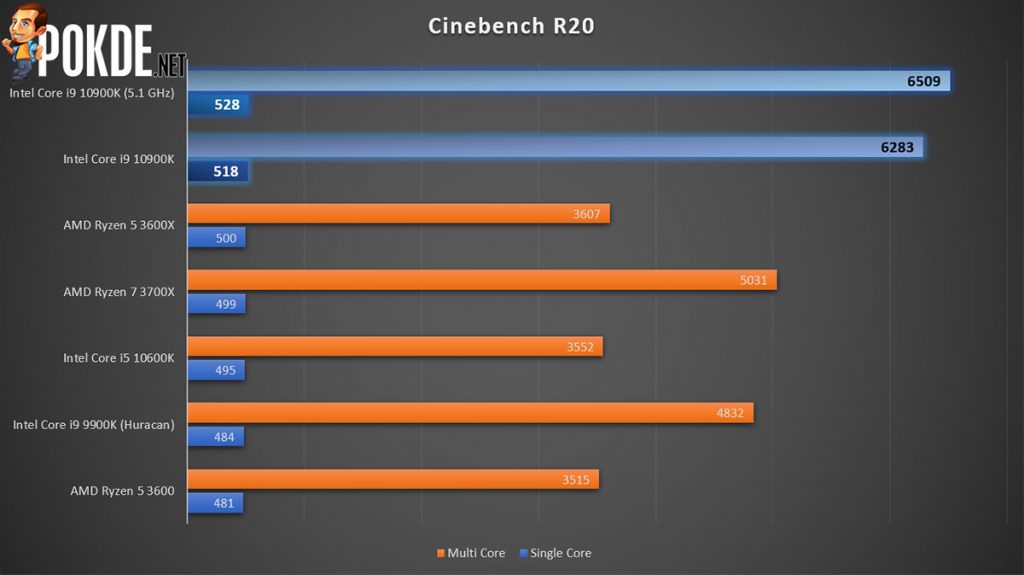 Starting off with Cinebench, we can see that the single-core performance isn’t significantly better than the competition right now, even though the Intel Core i9-10900K runs at quite substantially higher clocks. With that said, the multi-core performance is still very formidable thanks to more cores running at higher clocks than ever. 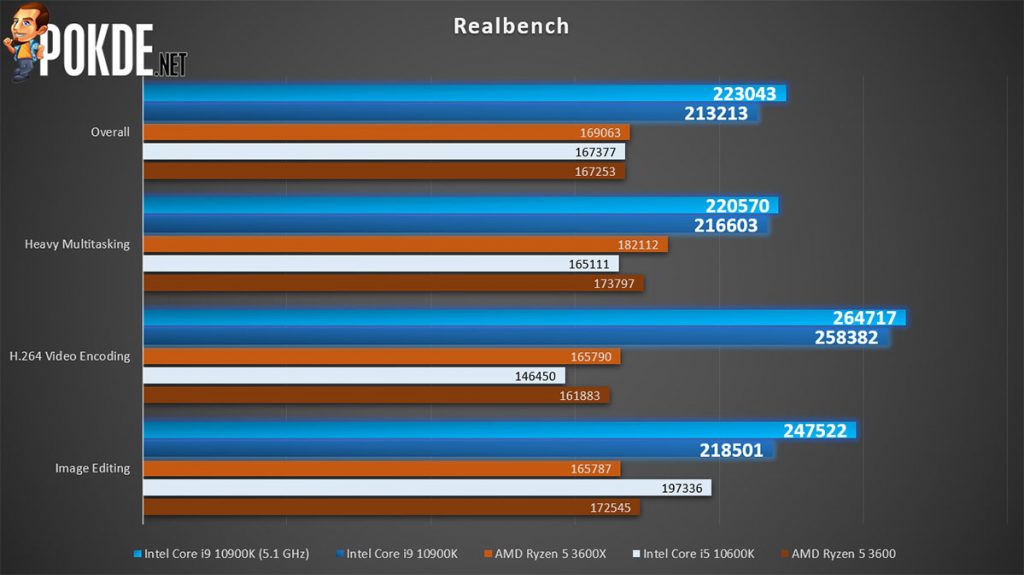 In Realbench, we see that the performance is also very impressive, owing to the multiple cores crunching away. Be it image editing or video encoding, the Intel Core i9-10900K does extremely well at it. I mean, this is exactly what you would expect from a flagship chip from Intel.

7zip is where we somehow see the Intel Core i9-10900K falter a bit. The compression places an emphasis on the cache, and it seems like the higher amount of cache that the AMD processors offer give it enough performance to compete against the higher core count of the Intel Core i9-10900K. Decompression sees a different story, with the extra cores and clocks pulling their weight. 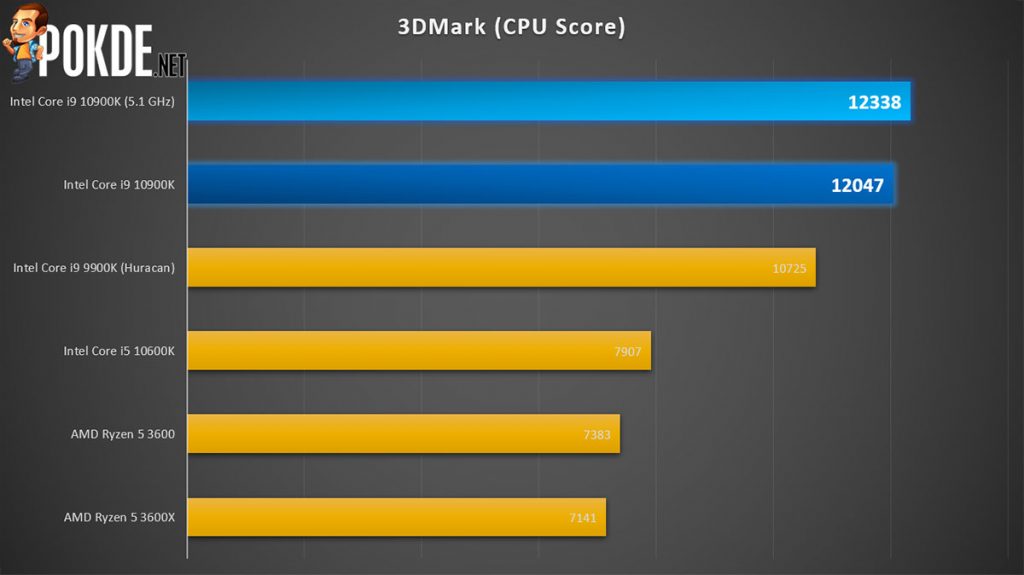 In 3DMark, the extra cores and higher clocks show their advantage over AMD’s mid-range processors. 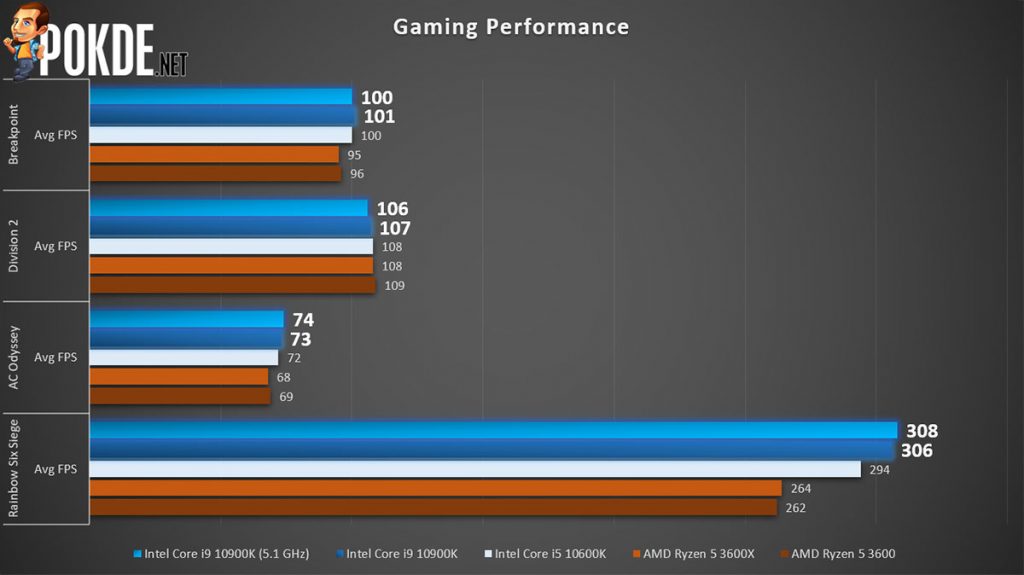 While 3DMark shows a pretty strong lead, in reality it doesn’t really pull that far ahead when in actual games. In CPU-bound games like Rainbow Six Siege you will be able to observe a sizeable performance gap between the Intel Core i9-10900K and the 6-core AMD parts, but in more recent titles like AC Odyssey, the gap quickly shrinks, before going away altogether with games like Division 2. With that said, it is undeniable that Intel does have the superior gaming chip here, but we are comparing against AMD’s mid-range offerings here. 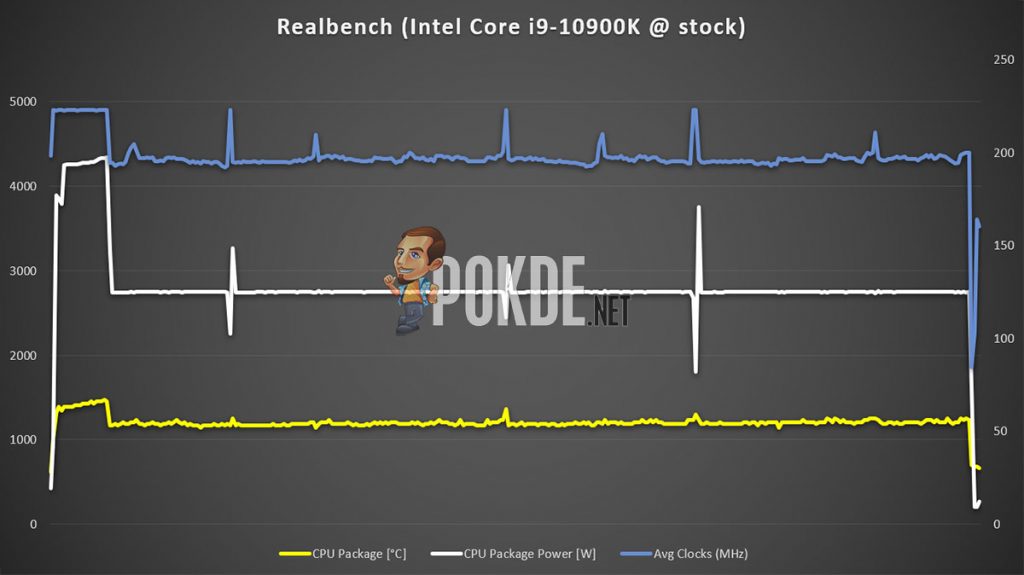 Before we got about to overclocking, we ran the CPU with the stock settings. You can see that it pulls a rather significant 191.81W on average, before throttling down to its 125W TDP. Clocks then drop from 4.9 GHz to settle down to around 4.3 GHz, with the random spike here and there.

Thermals are quite well-managed as it doesn’t even break 70°C in our testing, unlike the rather scary omen that an earlier leak brought to us. Intel designed the Intel Core i9-10900K to boost to really lofty clocks even when running on all cores, which offers a nice boost to overall performance. 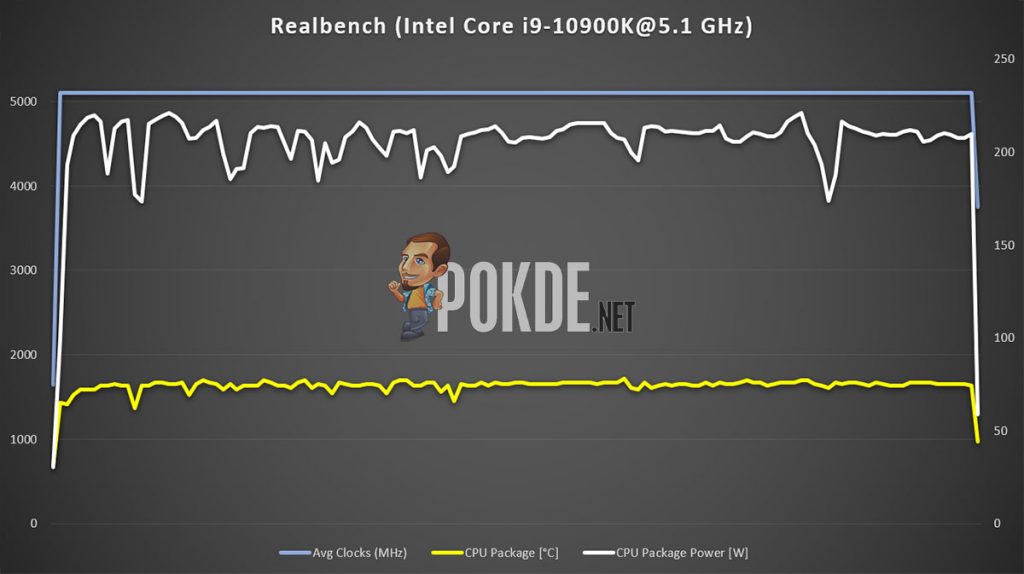 After slapping on a healthy overclock to reach 5.1 GHz at 1.355V, we see that the CPU now draws 207.66W on average throughout the 15-minute Realbench stress test. That’s a pretty significant increase although one which I do find to still be very manageable with a good 240mm AIO cooler like the MasterLiquid ML240R we used for the tests. Temperatures now hover at around 76°C.

As with most Intel overclocks, all you need to do is to change the multiplier and you are ready to go. To get a rough idea of the stability, we ran Realbench for 15 minutes, which also utilizes the AVX CPU extensions, which might make many CPUs falter. Without an AVX offset, our sample of the Intel Core i9-10900K managed to pull off 5.1 GHz at 1.355V without crashing in Realbench, which I do consider pretty impressive. Spending a bit more time on the Intel Core i9-10900K might yield even more impressive overclocks, although you might want to pair the processor with a suitably high-end motherboard as the Intel Core i9-10900K’s power draw is not something to scoff at.

Intel holds the upper hand in terms of clock speed over the competition, and that benefit is clearly seen in older games. However the advantage quickly dissipate once you start playing modern titles which are more GPU-limited, in addition to being able to take advantage of more cores, which is a card in AMD’s favor. With that said, the Intel Core i9-10900K closes the gap a little when it comes to core count, and the ability to deliver the higher clocks on more cores than Intel has ever offered makes the Intel Core i9-10900K a much more compelling option than its predecessors.

For $488 (~RM2125) a pop, the Intel Core i9-10900K is not cheap, but it is offered at exactly the same price as the previous generation’s 8-core SKU, so you are getting a bit more value out of Intel with this generation. It’s still quite difficult to recommend Intel’s flagship chip, as gamers will get better value from the mid-range segment rather than at the top-of-the-line. Gaming performance seen here is also pretty similar to the Core i5-10600K’s, which makes the Intel Core i9-10900K harder to recommend to gamers.

With more cores, you might also want to use it for heavy multi-threaded workloads. However the microarchitecture is beginning to show its age with poorer performance and a relatively high power draw. There’s also the case of AMD offering more cores for around the same amount of money. 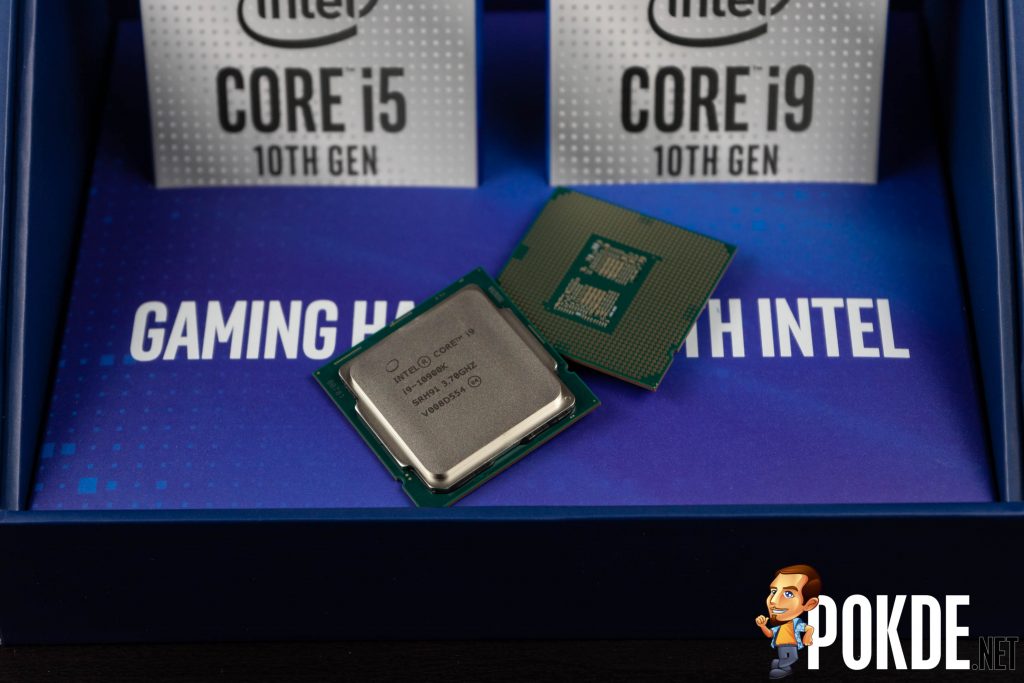 Our thanks to Intel for sending us the Intel Core i9-10900K for review.

Boost Your E-Learning Experience at Home With These Awesome 10th Gen Intel-po...
Next