#Pokdepicks 5 Awesome Games to Look Out for in February 2020 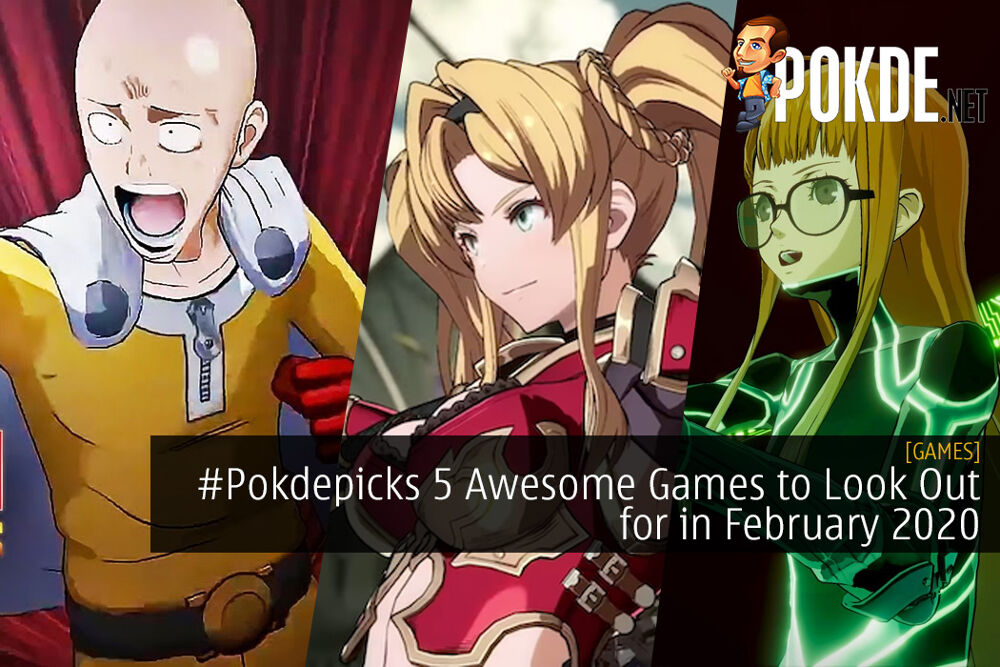 First up in the list of games to look out for this February 2020 is Yakuza 5. Kazuma Kiryu, once known as the Dragon of Dojima, has been enjoying a quiet life as a taxi driver in Hakata after cutting ties with his past. However, he was forced to return to the criminal underworld due to the war between the Tojo Clan and the Omi Alliance.

The game takes place across five major Japanese cities; Tokyo, Osaka, Hakata, Nagoya, and Sapporo. Coinciding the number of cities is the same number of protagonists; Kazuma Kiryu, Haruka Sawamura, Taiga Saejima, Tatsuo Shinada, and Shun Akiyama. Each character will play a major role in how the war will unfold, and it’s not going to be easy.

Fun fact, Yakuza 5 is a reboot of sorts for the series but not in the way you think. The game had double the development time from other the other entries and was set with the goal of having the greatest scripts and scenarios seen thus far. Moreover, this one utilized a brand new graphics engine, allowing the developers to give it a much needed breath of fresh air.

Yakuza 5 will be coming exclusively to the PlayStation 4 on 11th February 2020.

A spinoff of the Granblue Fantasy RPG, Granblue Fantasy Versus is a fighting game developed by Arc System Works. The goal of the game is to simply unleash a combinations attacks to empty the opponent’s life bar enough in order to win. To ease newcomers into the game, each character can perform Skybound Arts, a skill that corresponds to the character’s ability in the main game.

It can be activated with a simple button press but there is a cooldown time after each use. This game will also feature a Story Mode, which differs from the main game modes as it acts as a side-scrolling beat ‘em up game instead. There will be a total of eleven playable characters, with five additional DLC characters coming at a later date.

Fun fact, Granblue Fantasy initially released as a browser game for mobile devices in 2014. The game will be celebrating its 6th anniversary soon, and Granblue Fantasy Versus is seen as a good way to mark the occasion. As such, they’ve partnered with Arc System Works, a developer that’s familiar with fighting games as they’re the ones behind Guilty Gear, a staple in the fighting game community.

GranBlue Fantasy Versus will be coming exclusively to the PlayStation 4 on 6th February 2020.

One Punch Man: A Hero Nobody Knows

Based on the popular Japanese anime / manga series of the same name, One Punch Man: A Hero Nobody Knows is a fighting game by Spike Chunsoft and Bandai Namco. The game takes place in a 3D arena using a 3-on-3 format, with each player choosing three characters for their team. For the most part, it’s a standard fighting game but it has one major exception.

The game has a unique “Hero Arrival” mechanic for protagonist Saitama. Due to him being able to defeat anyone in just a single hit, he will always be late for a fight. This forces the team that chooses him to survive as a two-man team until his arrival. Certain attacks can increase and decrease his arrival time. If he doesn’t arrive by the time the time his two teammates are subdued, it’s considered a lost. If he does arrive in time, it’s inevitably a win as he’s practically invincible.

Fun fact, One Punch Man: A Hero Nobody Knows has a bigger focus on fun rather than competitive spirit like in other fighting games. Saitama can never be defeated by any character aside from himself. When pitting two Saitamas against each other, neither will flinch when taking a hit. When one loses, he simply runs off to go do something else instead of falling in defeat.

One Punch Man: A Hero Nobody Knows will be coming to the PlayStation 4, Xbox One, and PC on 28th November 2020.

Yet another spinoff game in the list, Persona 5 Scramble is a hack and slash action game by Omega Force and P-Studio. It is seen as the Dynasty Warriors adaptation of the Persona 5 RPG. The game takes place six months after the events of Persona 5, where Joker and the rest of the Phantom Thieves of Hearts are taking a vacation travelling around Japan.

At the time, they started to hear rumours of people being attacked by Shadows, leaving them unconscious in the real world as they wake up in a mysterious version of Tokyo filled with supernatural enemies. Due to the similarities between the rumours and their own past experiences, the Phantom Thieves of Hearts make a move to investigate the matter.

Fun fact, Persona 5 Scramble started development around the time of Persona 5’s release with the initial title Persona Warriors. The gameplay elements symbolized the collaboration between Omega Force and P-Studio, as it combined the free flow action combat seen in Dynasty Warriors with some tactical turn-based combat aspect from Persona 5.

Persona 5 Scramble will be coming to the PlayStation 4 and Nintendo Switch on 20th February 2020.

One of the most unique games to be created, Dota Underlords is an auto battler game by Valve based on the popular Dota franchise. It’s essentially a chess-inspired competitive strategy game, where players place characters known as “heroes” on an 8×8 grid-shaped battlefield. After a preparation phase, a team’s heroes then automatically fights the opposing team without further input from the player.

A match features up to eight players online who take turns playing against each other in a one-on-one format, with the winner being the final player standing after eliminating all of the opposing heroes. Players can earn gold, experience, and items that can be used to further strengthen the heroes. You can play with other people online or alone in practice mode and fight against bots.

Fun fact, Dota Underlords is based on the popular Dota 2 community created game mode, Dota Auto Chess. The game is available as a free-to-play Early Access title on Steam on June 2019. The official release in February will see some updates and have the game finalized on its format.

Dota Underlords will be coming exclusively to PC on 25th February 2020.

Aiman Maulana
Jack of all trades, master of none, but oftentimes better than a master of one. YouTuber, video editor, tech head, and a wizard of gaming. What's up? :)
Pokde Recommends
Bandai NamcoconsoleGamingKoei Tecmonintendo switchOmega ForceP StudioPCMRBlogGamingMicrosoftNintendoPCMRPS 4SonySwitch
MORE
Read More
741