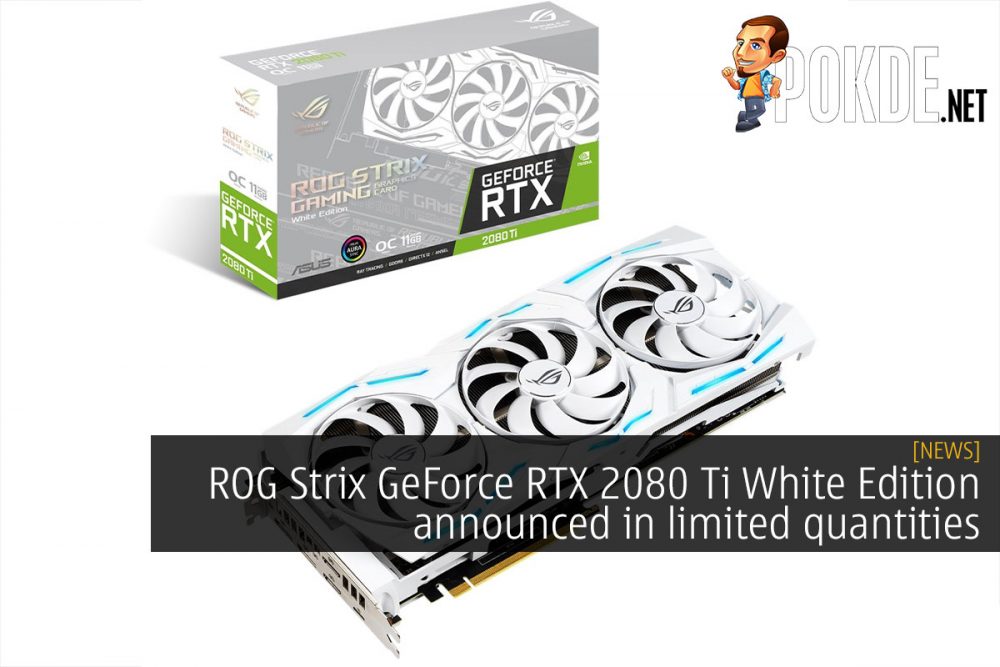 While the Republic of Gamers is synonymous with the black-red color scheme, it seems like the latest graphics card plans on bucking the trend with an all-white ROG Strix GeForce RTX 2080 Ti White Edition.

While ASUS has not revealed the exact number of cards available, there are reportedly going to be 1000 units of this card. In addition to a beautiful white finish on almost every part except for the aluminium cooler and PCB, the ROG Strix GeForce RTX 2080 Ti White Edition is clocked higher thanks to a selective binning process. Well, that’s probably why it’s so limited.

The GPU touts boost clocks of 1770 MHz instead of the “standard” ROG Strix GeForce RTX 2080 Ti OC Edition‘s 1665 MHz. The memory also gets a bump up to 14 800 MHz. The sum of the higher clocks should yield a small bump in performance, but with the GeForce RTX 2080 Ti being so powerful, it might not even be necessary.

Well, if you want one, you should be able to get one for €1600 (~RM7351), which is quite a lot of money to pay for a graphics card. But hey, if you are in Malaysia, you are lucky. This card is not going to make its way here, at least not officially.

Pokdepinion: I must admit, that looks awesome. Now hopefully the next-gen cards will come with a white option as standard.

Celcom Offering The Latest Smartphones At Up To 55% Discounts As Well As Free...
Latest Video
Read More
931