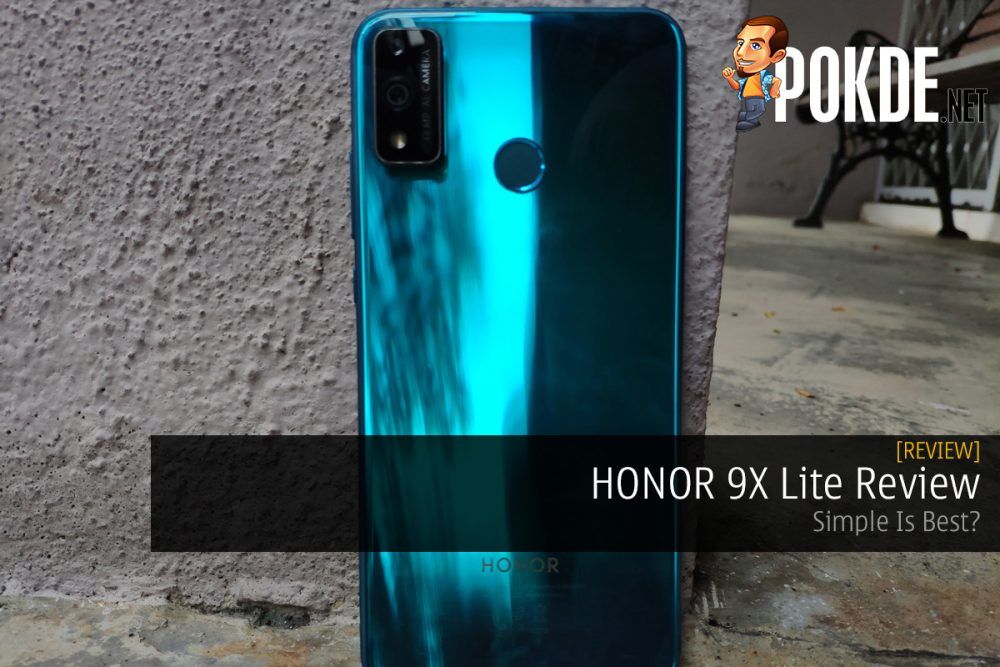 An HONOR smartphone that comes with GMS in 2020. Coming with a large storage, the HONOR 9X Lite also features a 48MP camera at an affordable price tag.

HONOR went back in time in terms of some of the specs but offers what some users want in an affordable device.

Today, we are going to take a look at HONOR’s latest entry-level smartphone. What exactly does it bring to the table? Let’s get started with this HONOR 9X Lite review.

I would like to take the time to mention that for our review unit, we only received the phone, a charger, and and a USB cable. You can expect the retail version to have a more complete package.

As you can see, HONOR opted to go with the ‘original’ notch design with the HONOR 9X Lite at the front.

On the right hand side, you can find the volume rockers and power button. On the opposite side however, you’ll find the SIM card tray instead.

Down below, you’ll find a 3.5mm audio jack, a microphone, a microUSB port, as well as the phone’s speakers. Moving to the top of the device, you’ll only find the secondary microphone sitting in solitude.

Moving over to the back, you’ll find a dual-camera setup located at the top-left side. There’s also your traditional fingerprint scanner here as well.

Overall, the HONOR 9X Lite is a nice-looking device but with a rather dated design. It’s a simple yet attractive design and I personally have no complaints about it apart from it being a bit of a fingerprint magnet, and it’s a matter of whether you fancy the notch design or not.

As you might know by now, the HONOR 9X Lite uses the Kirin 710F chipset, which happens to be their mid-range SoC previously.

Kicking off with the Antutu benchmark, the HONOR 9X Lite doesn’t sit well when compared to the rest, including smartphones with the same chipset. It does however managed to beat the realme 5’s Snapdragon 665 score.

The same can’t be said on the Geekbench test though as the phone performs the best when it comes to single core performance. Its multi-core performance however isn’t at the top of the pile.

We see that the graphic performance seems to be higher compared to the HONOR 9X and HUAWEI Y9s, both of which pack the same chipset.

Similarly in PCMark’s Work 2.0 test, the HONOR 9X Lite surprisingly is ahead of its brethren and by quite a margin. HONOR might have optimized the chipset for the device.

Lastly, we have the battery performance from PCMark Work 2.0’s endurance test. The HONOR 9X Lite did not fare as well as the rest. While it does pack a smaller battery than the others, the efficiency doesn’t look satisfying.

As for real life usage, I find that it’s slightly better than what the benchmark shows. After all, everyone has their own style of usage. I usually find that I’m left with 55-65% at the end of the day with my usage simply being messaging apps, Facebook, as well as some YouTube videos.

A 30-minute charging period will get you 26% of juice, just in case you’re wondering on the speed of its 10W charger.

Some might dislike notches on smartphones but to be fair, the one on the HONOR 9X Lite isn’t the biggest around and I have tested quite a number of them. One thing that I like is the notification LED on in it. This means you won’t need to turn the device on to check up on new messages and other notifications.

Honestly, I dig the design and look of the device; it’s simplistic. The feel of the phone is quite nice and fits perfectly in my hand. You might however dislike the plastic build of the device as it’s a bit of a fingerprint magnet. You could however solve this by fitting it with a phone cover.

One of the things that I enjoy doing on a smartphone is watching videos, and audio plays a big role in that. I personally wished that the speaker on the HONOR 9X Lite would be a little louder. I found myself needing to max out the volume (or near to it) to actually listen clearly most of the time. A pair of headphones / earphones however would be an alternative but it’s just not convenient at times.

If you’re wondering about it, yes, the HONOR 9X Lite comes with GMS. For those of you who are dependent on it, don’t worry about it.

You can expect the same skin as the other HONOR smartphones in the market. Personally, I feel that EMUI could do with a visual overhaul. Regardless, it has everything that you need.

Similarly, you’ll find the camera UI to be the same as the other smartphones in the company’s lineup. It’s still generally easy to use and has all the options you need.

With proper lighting, the camera does a decent job with pictures. As expected, poor lighting and zoomed-in images create grainy images. It’s worth noting that you’d need to enable the 48MP mode to shoot at higher resolution. Details in the mode is slightly improved but nothing much to shout out about. Just be sure to have space in your storage as they take up more space.

A big shout out to HONOR Malaysia for providing the HONOR 9X Lite that was used in this review!

Donald Trump’s Tweet Has Been Labelled ‘Potentially Misleading...
Next