Nokia 7.2 Review — It’s Not Just About The Hardware 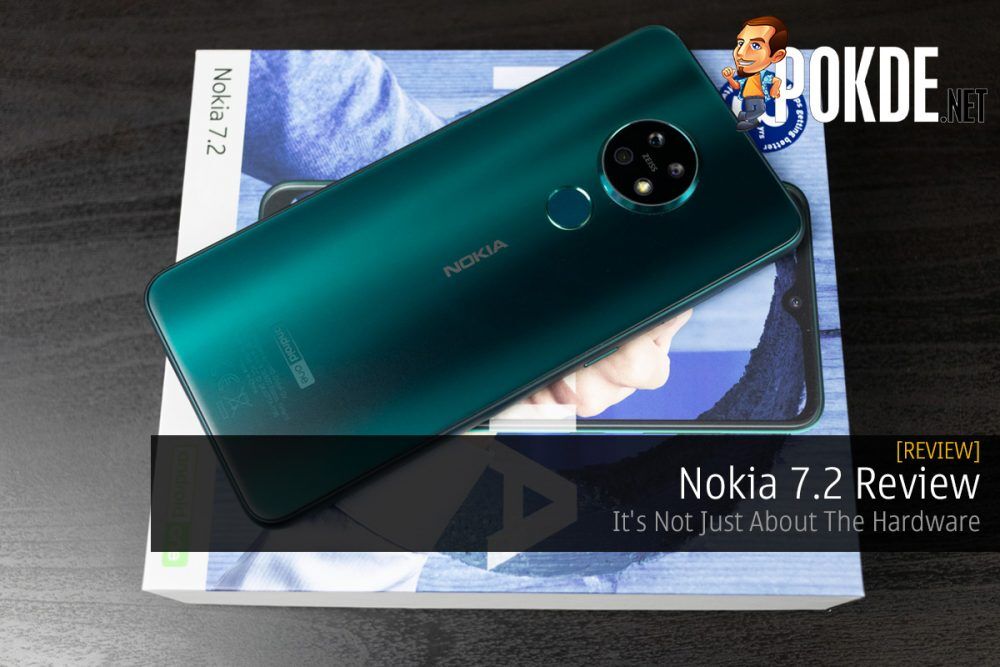 Assured of monthly updates for three years with the Nokia 7.2 being an Android One smartphone, the phone is also the first from the company to come with a triple camera setup at the back with a 48MP shooter.

It's a good smartphone despite the outdated chipset, but there are a number of areas that could use some improvements.

In this review, we’re taking a look at the Nokia 7.2, the latest mid-range device from HMD Global. Aside from being an Android One smartphone, the Nokia 7.2 is their first device to be fitted with a 48MP triple camera setup. Can it impress? Let’s find out.

Inside the box you’ll get:

On the front, the Nokia 7.2 sports a waterdrop notch and a little bit of a chin going on at the bottom where the Nokia branding can be seen.

On the right side, we have the usual volume rockers and power button for the smartphone.

On the opposite side is where you’ll find the SIM tray accompanied by the Nokia 7.2’s dedicated Google Assistant button.

Down below is where the microphone, USB Type-C port, and speakers are located.

On top, there’s the 3.5mm audio jack as well as the secondary microphone hole.

As you can see, we have the Cyan Green variant of the Nokia 7.2. Here, you can see the triple rear camera setup as well as the LED flash at the top. There’s also your traditional fingerprint sensor right below the camera. Right below that, you have the Nokia branding present.

We’re quite curious about HMD’s decision to utilize an old Snapdragon 660 chipset on the Nokia 7.2, where we can see the difference in scores compared to the Snapdragon 710 on the Nokia 8.1. It did manage to beat the newer Snapdragon 665 device however.

In 3DMark we found a similar results to the previous test.

Over at Geekbench, it didn’t do too bad as it managed to beat two smartphones with newer chipsets.

The same can’t be said on PCMark’s work performance test however as the score is rather low.

As for endurance, we found that the Nokia 7.2 is the longest lasting device with a Snapdragon 660 that we’ve tested thus far. As you can see however, it doesn’t fare quite well compared to other mid-range smartphones in the market currently.

As for real life usage, it adds up with the battery benchmark. Most of my usage comes from the usual social media apps. I noticed that with 5 minutes on WhatsApp, the battery decreased by 2%. This can be very concerning.

I feel that if you’re not a heavy user, the phone can last for you the whole day (or even more). They could’ve added a bigger battery capacity but that would add more weight to the smartphone.

With a 30-minute charge, we find that you’ll be able to get 23% of battery life using the charger included in the box.

From a design perspective, it doesn’t feel like any other mid-range device. It is crafted from polymer composite which makes it feel quite light despite the look. Although it feels like plastic on the back, it is actually glass. Moreover, it actually feels nice on the hands thanks to the curved glass. Hats off for HMD for that.

Though the phone comes with a small waterdrop notch, I’m glad that they still provide an LED notification light, which they’ve placed at the power button.

With the Nokia 7.2, it comes with a dedicated Google Assistant button on the left side. It’s definitely convenient for users to utilize for things like setting an alarm or checking your schedule without looking. The only thing that I’m dissatisfied with is the placement. With it being exactly on the opposite side of the power button, I find myself pressing the wrong button often.

While it was never meant to be a gaming smartphone, I’d just like to share this part here. If you’re a fan of Call of Duty Mobile, the highest graphics settings that you can play is at medium. The result is a consistently smooth gaming experience which can be surprisingly enjoyable.

With the smartphone’s PureDisplay, it does make videos more enjoyable. With good level of brightness and colour contrast along with colours being rather vibrant, it’s pretty good as a multimedia device.

As you’d expect from an Android One device, the software for the Nokia 7.2 is smooth. Expect no bloatware from the phone right off the box. HMD has promised that they will provide 3 years of monthly software updates. Rest assured that it will also be receiving the Android 10 update soon.

The camera UI is pretty straightforward and everything’s conveniently placed. There are a few modes that you can play around with including Night mode, Portrait, Pro, and Nokia’s own Bothie mode that captures both front and back cameras.

I find that picture quality from the camera rather inconsistent, where the details and colours can be quite off at times. Despite having an ultra-wide lens, it doesn’t feel like it covers enough area.

The ZEISS portrait modes are fun to play around with, but then again, it only changes the shape of light around the photos. You can access them instantly from the UI or edit them by accessing Google Photos.

For the front camera, Portrait mode is a bit aggressive when it comes to the bokeh part. Normal shots are surprisingly decent though.

If you wish to check the full resolution pictures, you can do so here.

Is it worth the RM1,299 asking price? It’s a bit hard to justify it, especially after seeing the competition out there in the mid-range segment. If Nokia priced the phone slightly lower, offer a bigger battery capacity or a newer chipset, it would certainly be a much more attractive offer.

With the Nokia 7.2, you will be getting the best possible experience from an Android smartphone, at least for the next 3 years. I’ll let you be the judge of whether that’s a good selling point or not.

With that being said, I thoroughly enjoyed the Nokia 7.2 overall, especially for the smooth user experience. It just could have been so much better. For that, I award the Nokia 7.2 with our Bronze Pokdeward.

Our thanks to HMD Global (Malaysia) for providing us the Nokia 7.2 used in this review!