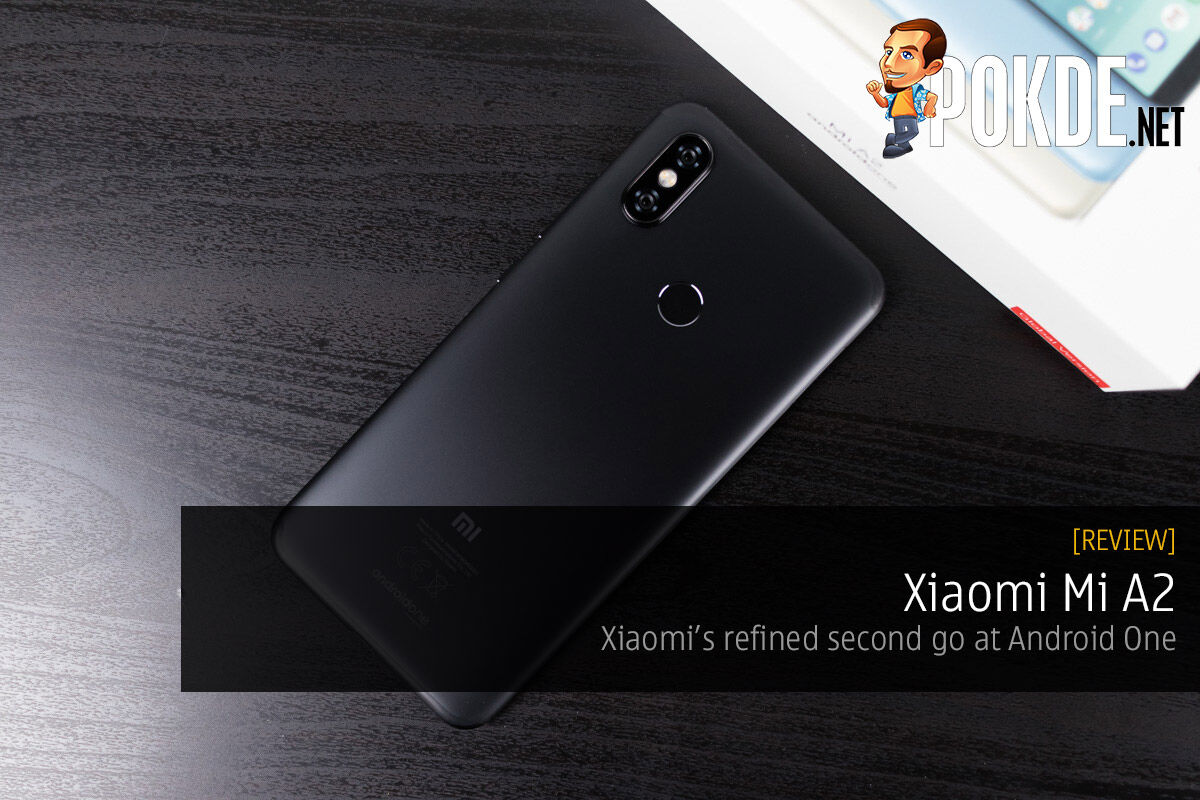 - Battery life is shorter than I would like
- No 3.5mm jack
- Camera software is a bit clunky

If you want to get a taste of pure Android, the Xiaomi Mi A2 offers an extremely compelling package for less than RM1000. 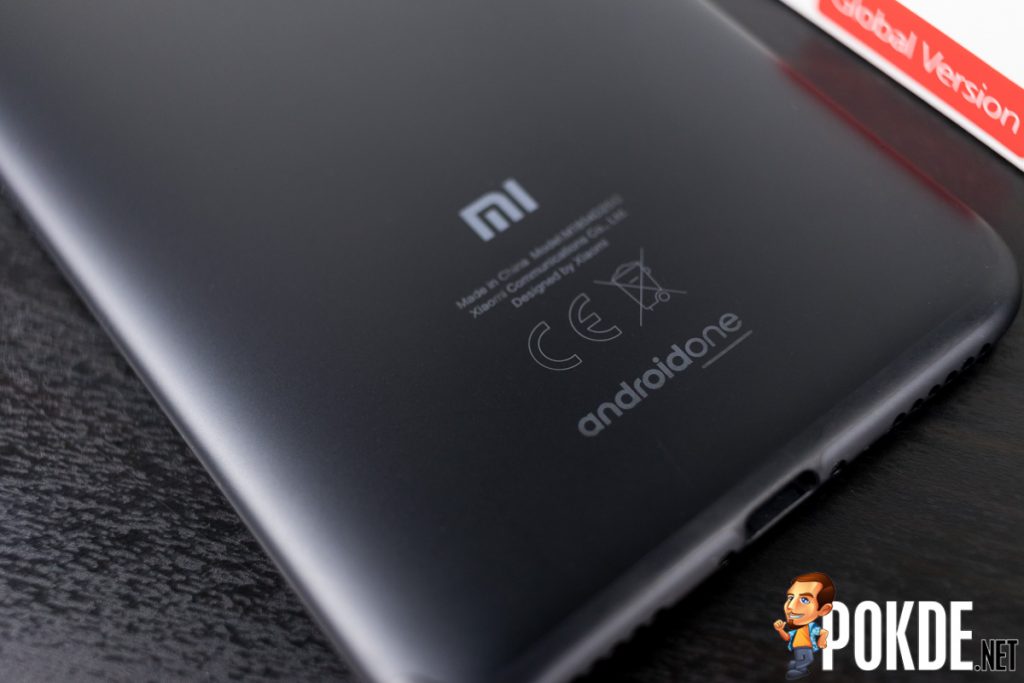 Ah, Android One. Android One main attraction is faster updates, and monthly security patches which are promised for up to 3 years from launch. Check out the long queue of smartphones that aren’t even on Android 8.1 Oreo, and you will understand why Android One is so interesting to smartphone enthusiasts. Google worked together with Xiaomi, one of the top names in the industry when it comes to value for money, and here we have the Xiaomi Mi A2. The Xiaomi Mi A2 is the second device from Xiaomi to be part of Google’s program to bring the pure Android experience to the masses without charging them the premium prices the Google Pixel devices now command. Movie sequels tend to be inferior to the original, so what about Xiaomi’s Android One sequel?

The Mi A2 comes in a simple package, but Xiaomi made sure to pack it with everything you need. The 10W charger might be disappointing for some considering that the Mi A2 actually has support for QuickCharge 3.0, but it is pretty standard to find these chargers with devices in this price range. The rest of the included stuff are pretty standard, and it comes with a USB Type-C to 3.5mm adapter too, thankfully. 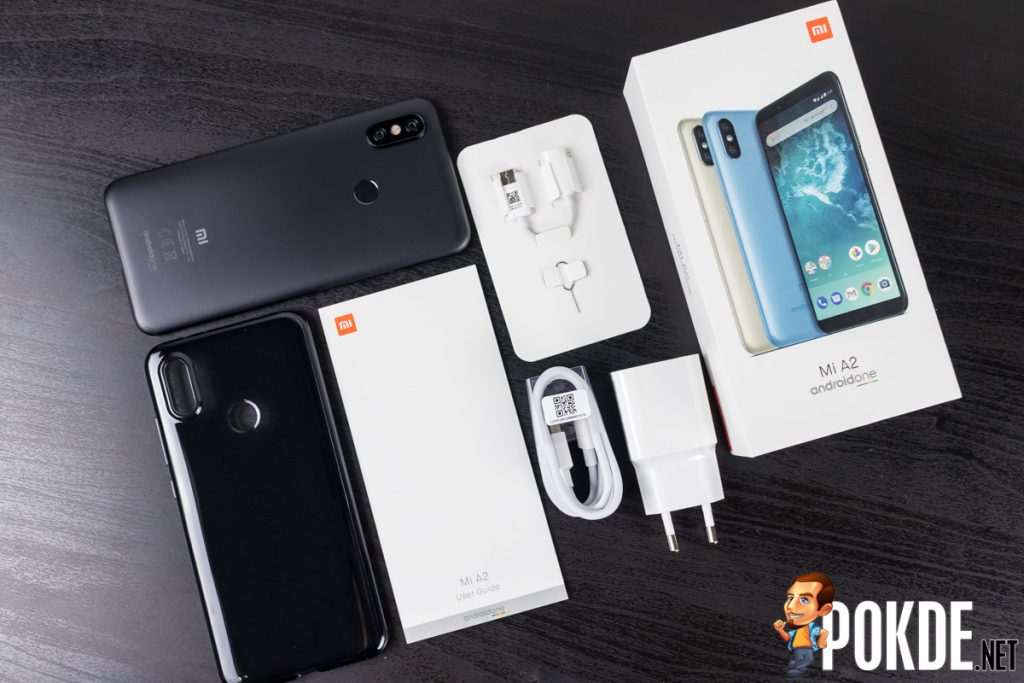 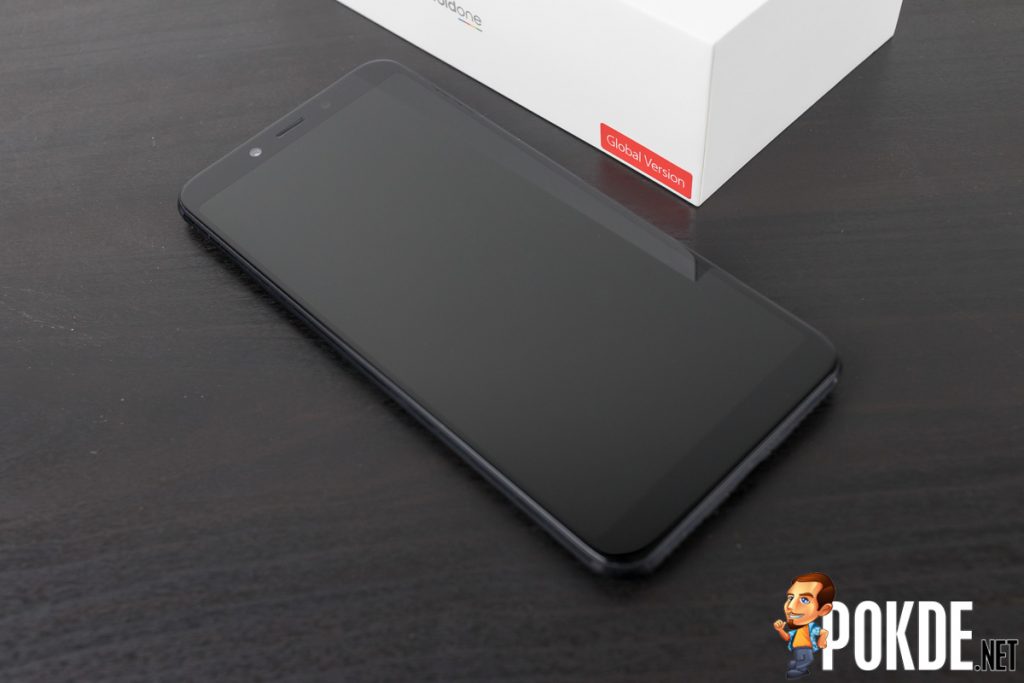 The front of the Mi A2 is as generic as it gets. Black bezels frame the dark screen. The bezels are rather thick here, on every side. It sort of reminds me of the Pixel 2 XL, but without the front facing speakers. The Mi A2 doesn’t compromise with an unsightly notch, instead opting for a standard 18:9 display with nicely curved corners. 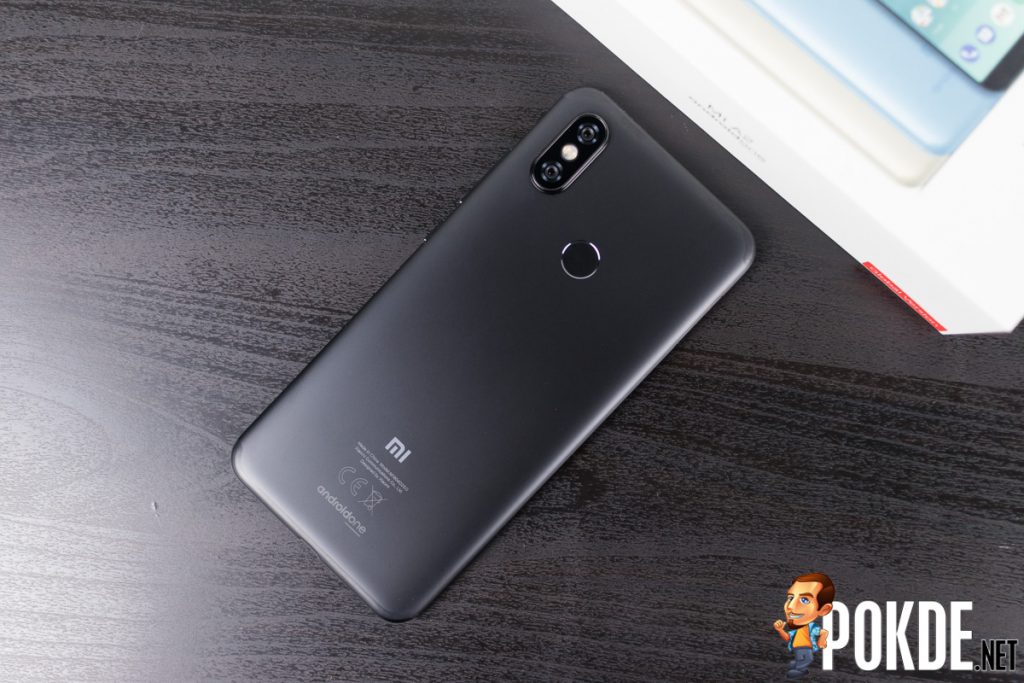 The back of the device is pretty standard. Xiaomi seems like a die-hard fan of a certain fruity smartphone’s camera positioning, and it has emulated it pretty well. Down to the fact that the flash is sitting between the dual cameras. The antenna lines are well hidden in the darkness of the rear body, which is nearly as dark as my future.

You can see that the camera protrudes a fair bit from the body, while the sides taper off nicely for a more ergonomic grip. The smooth curvature of the sides make for a very comfortable device to hold. The protruding camera actually sticks out from the body more than the Redmi Note 5, so you would want to slap on a case to prevent the metal ring around the camera from getting scuffed up. 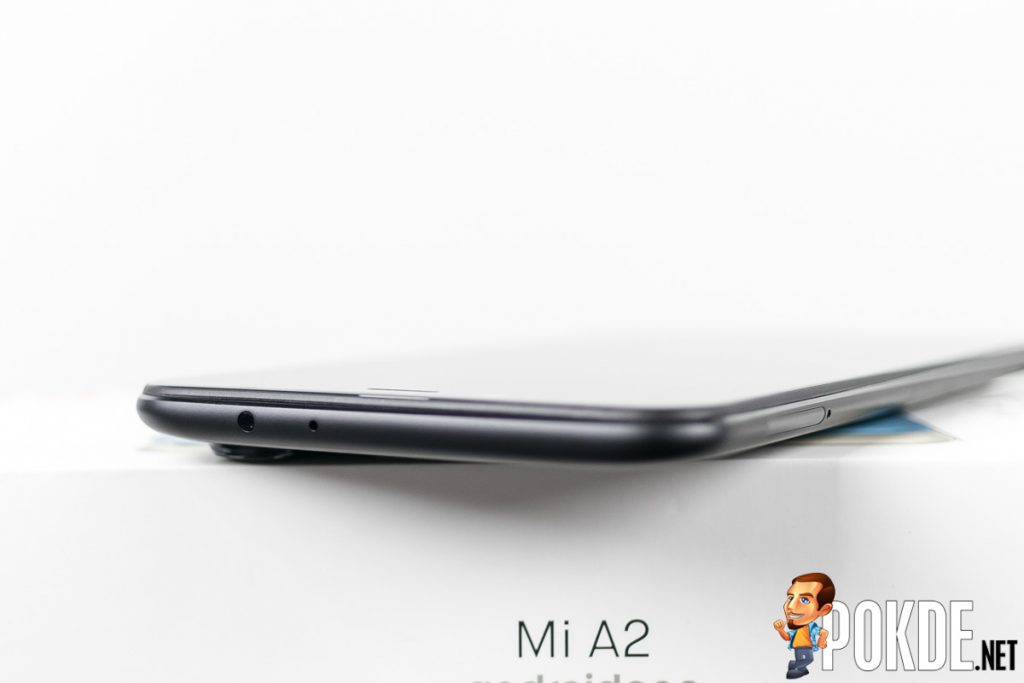 Xiaomi seems intent on keeping the IR transmitter alive, with it featured even on the budget Redmi Note 5, and also on the Mi A2 here. Beside the IR transmitter is the hole for the secondary microphone. You can also see from here that there is a plastic rim between the metal body and glass panel in front, which should prevent small drops from instantly destroying your screen. 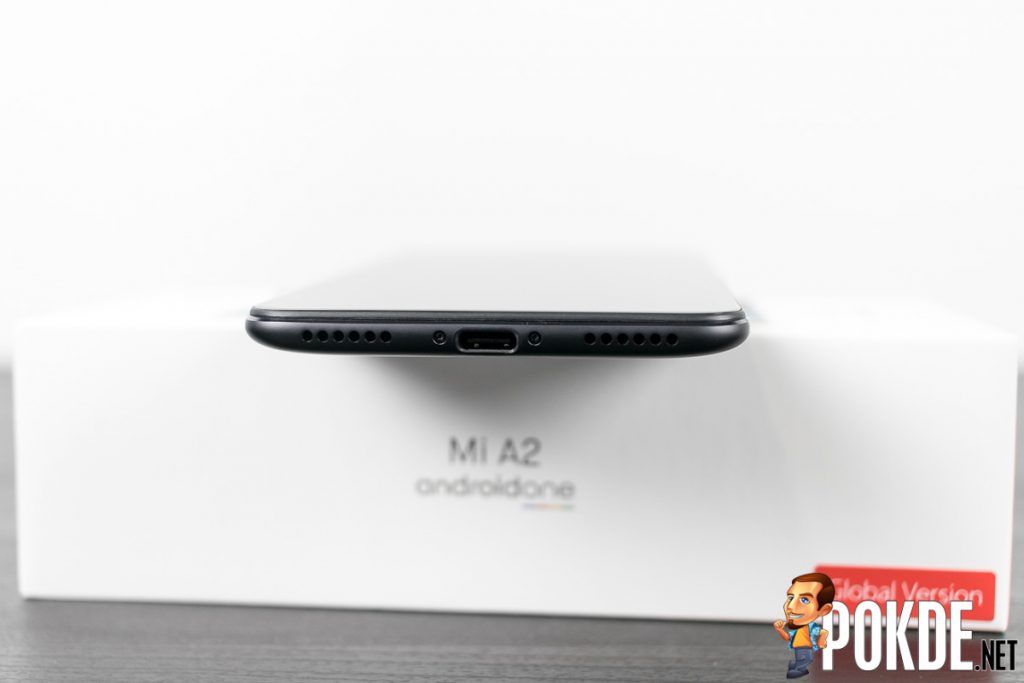 Over on the bottom we see the USB Type-C port flanked by symmetrical grilles. The screws are a nice touch, but in case you haven’t noticed, there is no 3.5mm jack. We will miss you, Jack.

The Snapdragon 660 may not be the latest chipset on the market, but that doesn’t mean it is a slouch. We will take a closer look at that later. The battery might be on the small side though at just 3010 mAh when most mid-range smartphones pack at least 3300 mAh nowadays. It is actually a downgrade from its predecessor, the Mi A1, which came with a 3080 mAh battery. 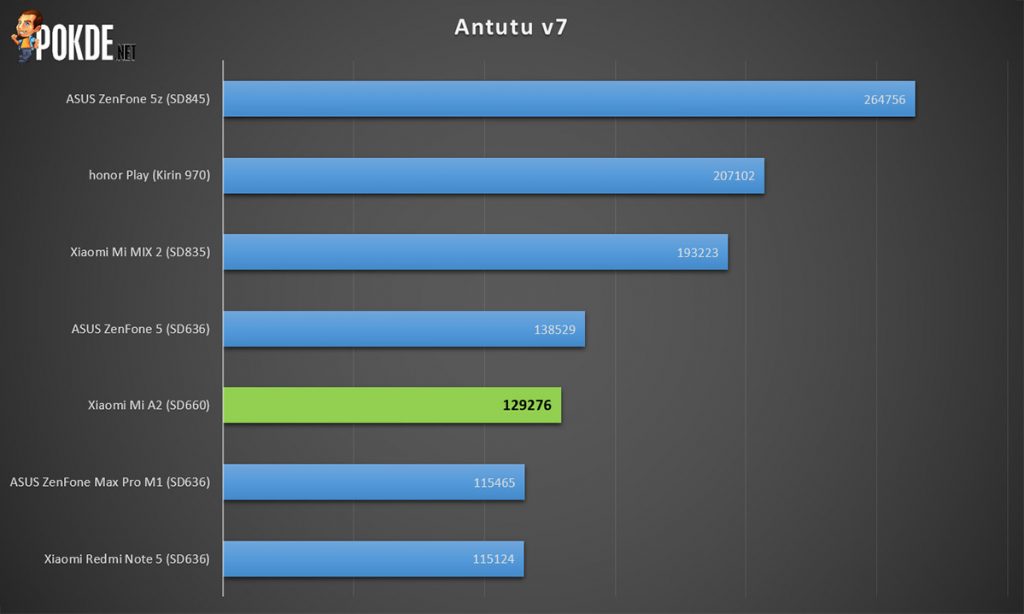 In Antutu v7, we have a limited selection of devices as we only started testing our devices with the latest version recently. The Mi A2 slots in below the ASUS ZenFone 5 which has an inferior Snapdragon 636 for some reason, but the ZenFone 5 is definitely more of a unique case with AI Boost. It maintains a small lead over the rest of the devices with a Snapdragon 636.

Here in Geekbench we see that it has a sizeable lead over most of the Snapdragon 636 and the Snapdragon 653. It does better than even the ASUS ZenFone 3 Deluxe, which featured a then-flagship Snapdragon 821 chipset. 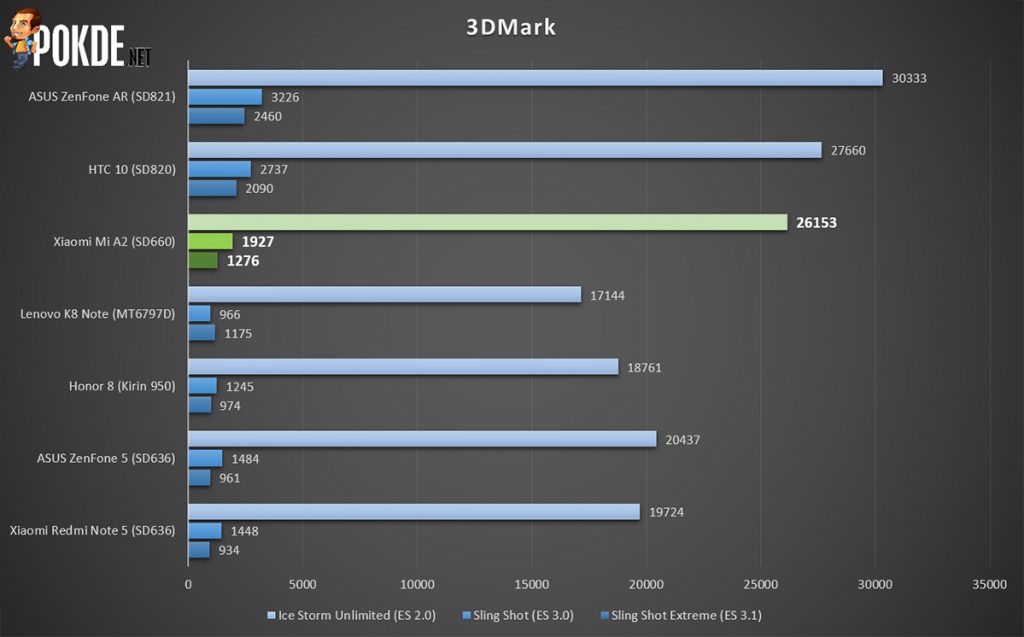 In 3DMark is where we see the Snapdragon 660 help the Mi A2 place itself well in the mid-range with its strong Adreno 512 GPU. 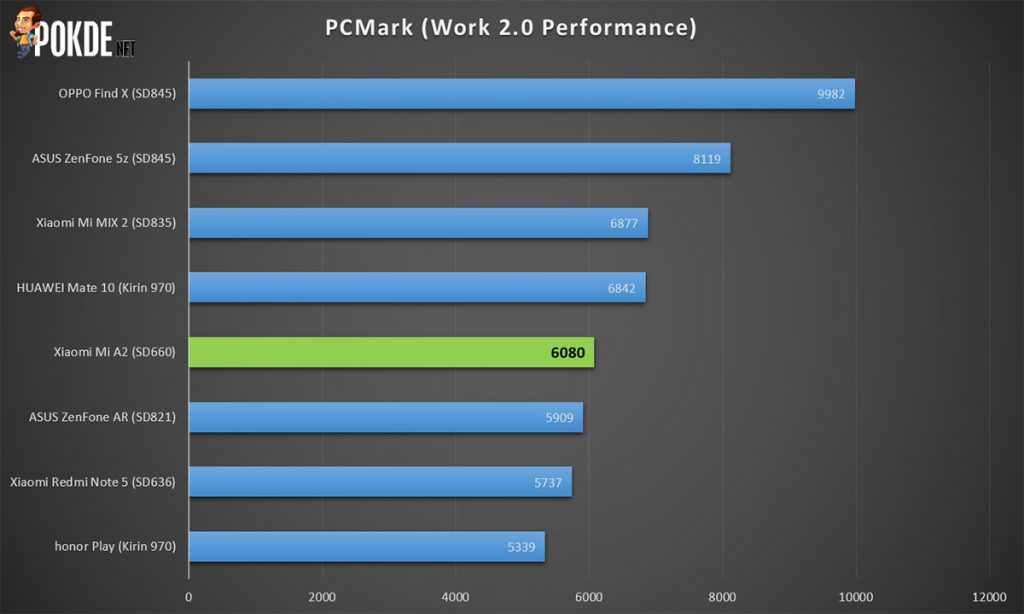 The Mi A2 excels at productivity related tasks, and it is the highest scoring device priced at less than RM1000 in our benchmark chart. 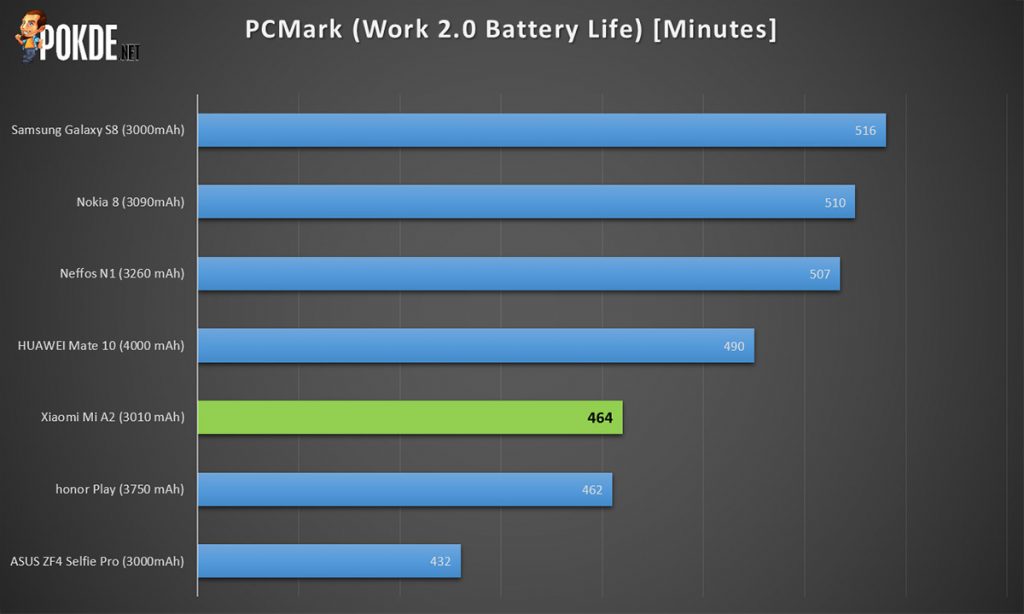 Clocking over 7 hours in PCMark’s battery life test, the Mi A2 did not fare that well here. If you want better battery life, you would do better with the Redmi Note 5, which is not only more affordable, but has a larger battery and a more efficient Snapdragon 636 chipset. 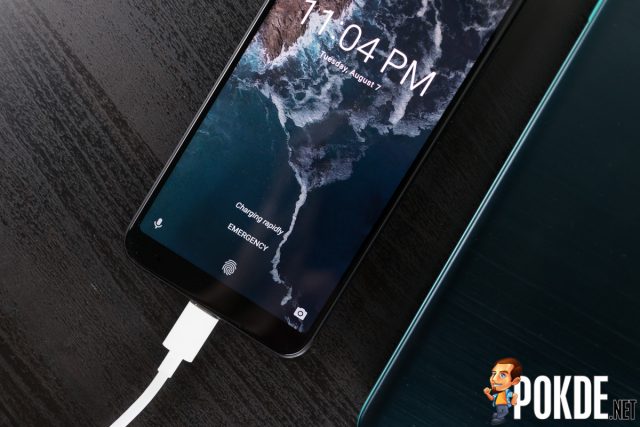 In real usage, I managed to squeeze around 4 hours of use before it hit the 15% mark. Charging up with the 10W charger gives about 34% juice in just 30 minutes, which isn’t too bad at all. Based on my usage, 34% should yield around 1 hour 30 minutes, which should be enough for you to reach another charger. 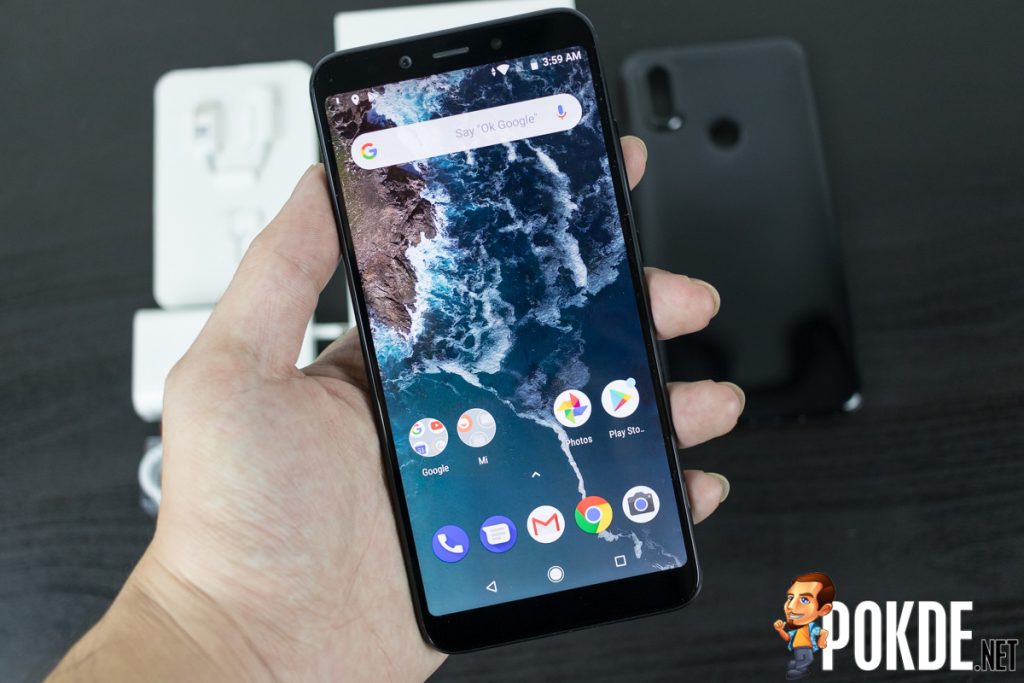 The Mi A2’s 18:9 FHD+ display is bright and vibrant, and the best part is that there is no notch getting in the way. So you get the full row of notifications visible at the top. That’s reason enough for me to get it. That’s before even holding it. Once you hold it, you won’t want to put it down. The way the sides curve ever so gently, and the overall slimness is just so comfortable to hold and caress. 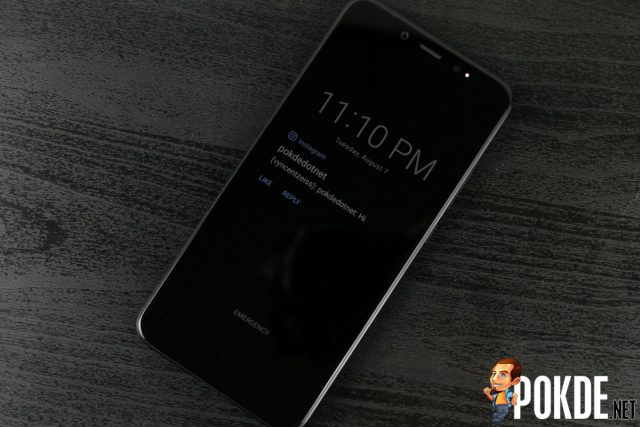 The position of the fingerprint sensor is just oh so right. The recess is very shallow, making for a much more seamless phone than you would expect at this price point. It unlocks quickly and has no issues at all dealing with wet fingers. I also really liked the Mi A2’s ambient display feature, whereby notifications will be shown briefly on the display, so you can choose to respond immediately or let the person wait. I usually do the latter. Don’t tell my girlfriend I said that.

Looking further, you will find the clean, fluid experience that defines Pure Android. Now this is like the furthest you can be from Xiaomi’s usual MIUI. While it’s part of the Android One program, it doesn’t mean that you will be forgoing Xiaomi-specific features. Stuff like the MIUI camera, file manager and Xiaomi’s headphone and audio effects are still here. Xiaomi also integrated Mi Services into the device, allowing you to participate in their user experience program. While the Mi A2 only has 4GB of RAM, it runs very smoothly due to the fact that there isn’t nearly as much bloatware as there is on most other phones on the market. Ah, Android One. 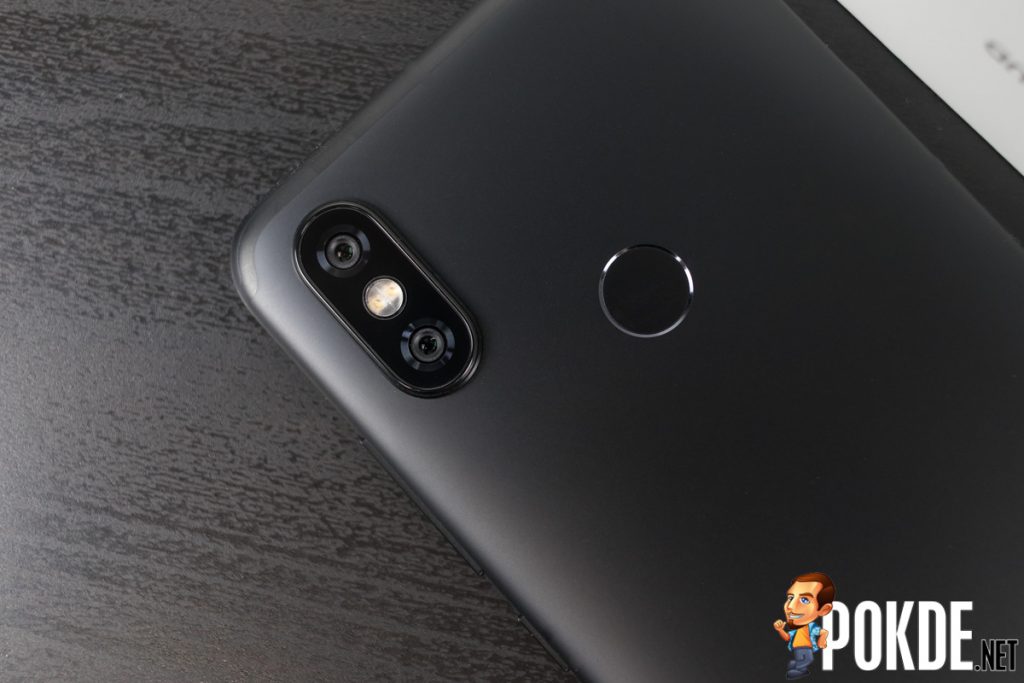 Speaking of the camera, we have here a dual camera system combining a 12MP f/1.75 primary camera with a secondary 20MP f/1.75 camera. Both cameras feature the same focal length, but the 20MP camera here is for low light situations. Something like what OnePlus implemented in the OnePlus 5T and the OnePlus 6. Which once again highlights the value proposition of this device. But, Xiaomi has yet to release the update to enable the auto-switching feature, so you can only manually switch to the second camera in the manual mode for now, or switch to the portrait mode to get bokehlicious 20MP images. The front camera features the same 20MP sensor, but behind a slightly slower f/2.2 aperture. 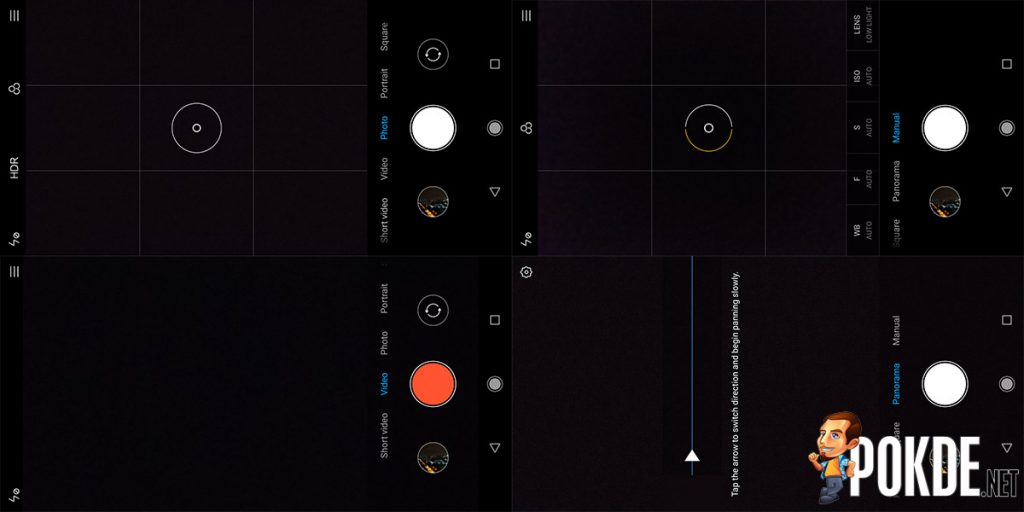 While the hardware may seem pretty impressive, the software is far from it. It’s not to say that Xiaomi didn’t jam pack the Mi A2 with camera features, but it takes too much effort to reach what I want. I really didn’t like swiping repeatedly just to reach the manual mode. On the plus side, the manual mode here is full-fledged, and even features focus peaking just like the Mi MIX 2, which is a boon for manual focusing.

While the user experience may be rather clunky, the image quality is pretty respectable. While it is still some way away from flagships, I would say that there will be few smartphones below RM1000 capable of putting up a decent fight. Shots were saved quite quickly, and the device was always ready for the next shot when we needed it to be. In our testing, it had a tendency to underexpose the darker regions of a scene, in favor of keeping details in the bright areas when HDR was active. This can be overcome by tweaking the EV manually, but the process of adjusting it is quite sluggish, detracting from the overall experience of using the Mi A2 as a camera. Right now, the Mi A2 doesn’t use the pixel binning feature yet, so calling the 20MP camera the Lowlight Lens just seems a little ironic at the moment. The 12MP sensor definitely delivers better images at night, at least for now. Check out the full-sized samples on our Flickr.

The Xiaomi Mi A2 is a huge upgrade over its predecessor, no doubt about that. The Mi A2 offers a lot for just RM999. Android One definitely offers faster updates. We actually got the August security patch recently. The flagships that I am reviewing have yet to receive the update. The camera setup, even in its incomplete state, is already remarkably good for its price. The Snapdragon 660 inside is plenty snappy for daily use, and even some gaming on the side. The build of the device is excellent, and it feels extremely nice to hold. The only thing holding the Mi A2 back is the battery, which is really small compared to recent devices. For us, we think the Mi A2 is one of best smartphone under RM1000, if not the best. Opt for the 6GB + 128GB variant if you are a heavier user though, because 64GB will quickly become inadequate when you download lots of games and hoard media.

Our thanks to Xiaomi Malaysia for provisioning the Mi A2 used in this review. To support us, check out the Xiaomi Mi A2 on Lazada via the following link:

Do You Feel Like You’re Paying More for Grab Nowadays? This Could Be Why
Next