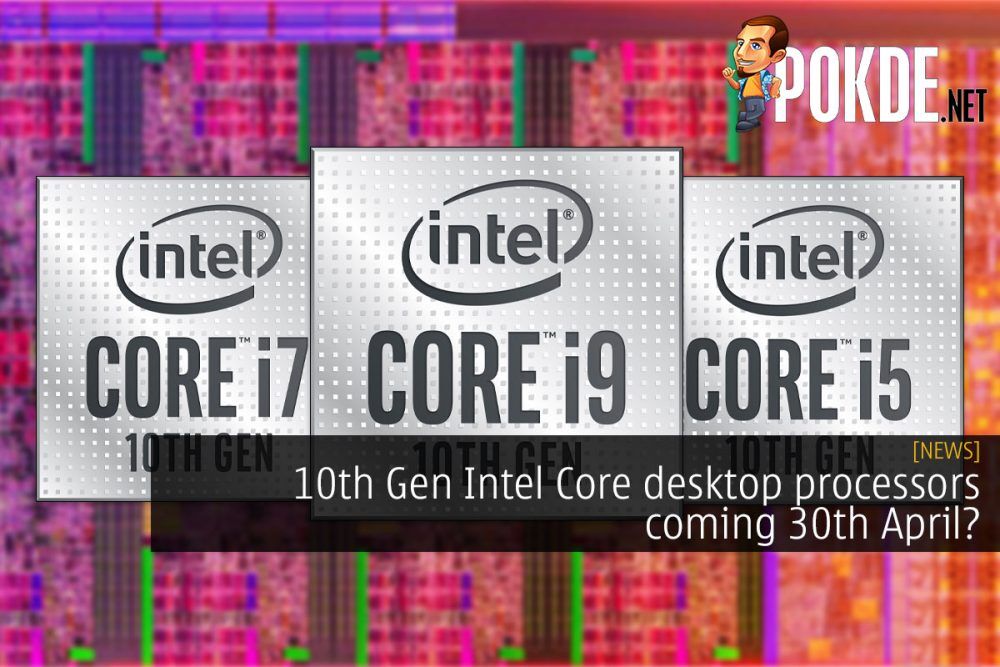 The 10th Gen Intel Core laptop processors have just dropped, and we are all pretty much waiting for the desktop parts to be announced. Most of the specifications has already been leaked, and even the pricing, but hey, the announcement has yet to happen. According to Videocardz however, the announcement is going to happen as early as the end of this month.

They managed to get their hands on what looks like leaked slides pointing to the Core i9-10900K featuring a 10-core configuration with HyperThreading for 20 processing threads, and 5.3 GHz boost clocks inclusive of Thermal Velocity Boost (TVB). Meanwhile the 10th Gen Intel Core i7-10700K will allegedly sport 8 cores and 16 threads, with a boost clock of 5.1 GHz, and last but not least there’s the Core i5-10600K with clocks of up to 4.8 GHz and a six-core, 12-thread configuration.

Interestingly, Intel seems intent on keeping Thermal Velocity Boost as a feature for only the 10th Gen Intel Core i9 parts, with the rest of the product stack not featuring TVB. Meanwhile Turbo Boost Max Technology 3.0 support is extended until the Core i7 parts, while the lower SKUs miss out on the feature. This is in contrast with Intel’s laptop strategy where TVB is featured in 10th Gen Intel Core i9 and Core i7 Comet Lake-H parts.

Here’s the full table of leaked 10th Gen Intel Core parts and their alleged specifications, combined from prior information as well :

It’s pretty much confirmed that Intel will be pushing the gaming performance narrative once again, and to be honest I do believe they do have the advantage there. But whether gamers will care enough for the 10th Gen Intel Core processors when they have to invest in a new board to use these new processors remains to be seen.

Interesting 🤔 Seems like something new is around the corner. 😬

According to the leaks, the 10th Gen Intel Core Comet Lake-S desktop parts will be announced on 30th April, with NDAs on reviews to lift on 27th May, coinciding with the start of the sales of the new processors. Intel’s board partners are reportedly shipping the LGA1200 motherboards to reviewers too, with der8auer already teasing the socket cover for the LGA1200 socket on his Instagram.

For gamers who want to hop over back to Intel, this might be the time though. The upcoming Rocket Lake-S processors has been leaked with support for the LGA1200 socket, but it will require a new Intel 500 Series chipset and will offer support for PCIe 4.0, which might just render your fancy new Intel Z490 board obsolete. Oh well…

Pokdepinion: I am honestly interested to see how much more frames can the Intel Core i9-10900K bring to the table versus a Ryzen 9 3900X…

Samsung Galaxy Note20 Plus Could Be The Smartphone To Beat As Leak Shows Benc...
Latest Video
Read More
559