AMD also decided against added PCIe 4.0 to their mobile processors, instead continuing their reliance on the eight-lane PCIe 3.0 interface in the AMD Ryzen 5000 series. Another thing that is still carried over from the previous generations is the Radeon Vega graphics, which is definitely beginning to show its age with the arrival of the Intel Iris Xe Graphics. 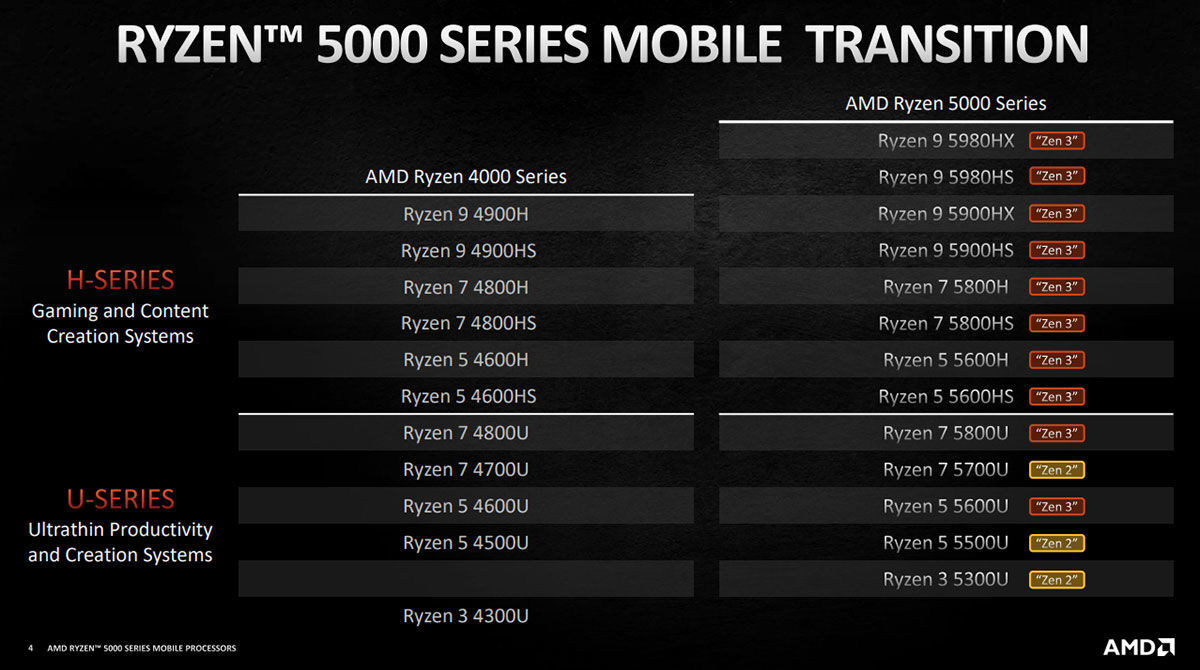 AMD spread out the Zen 2 and Zen 3 SKUs in a way that there aren’t any overlapping SKUs. If you just want a higher core count, you can opt for the more affordable Zen 2-based processors, while if you want more performance you can also opt for the Zen 3-based ones. The Zen 2 SKUs are available from the low-end 4C/8T configurations all the way up to the 8C/16T options, while Zen 3-based SKUs start from 6-cores. 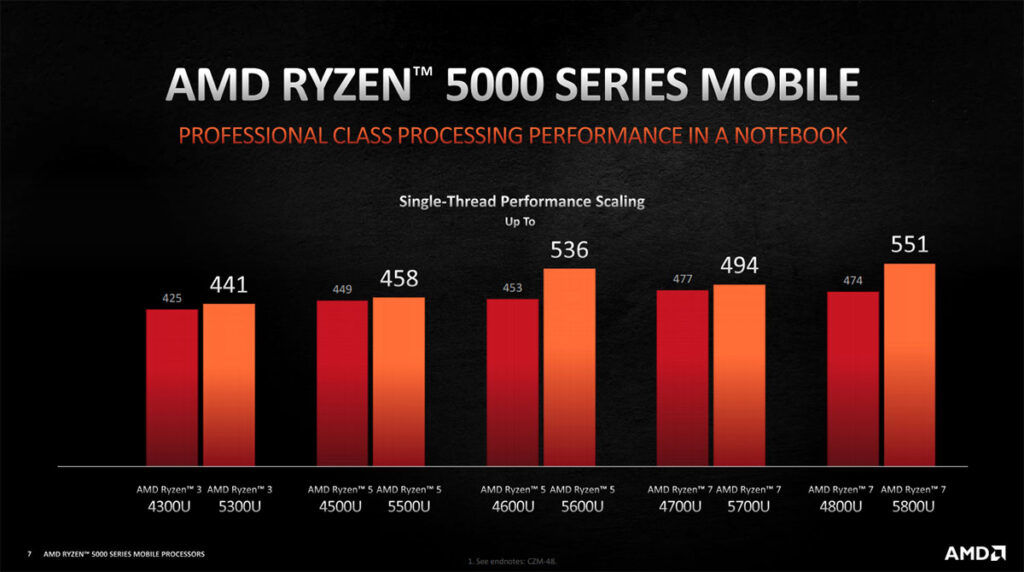 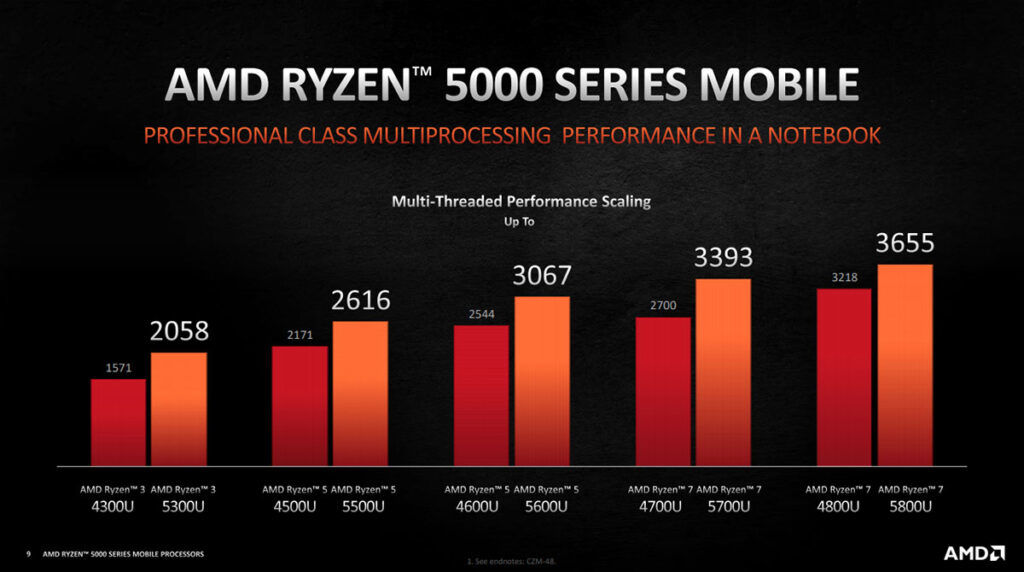 As we have previously observed with the desktop AMD Zen 3 processors, this generation, or at least the SKUs with the latest Zen 3 cores, are bringing a huge leap in performance and efficiency. The AMD Ryzen 7 5800U is expected to deliver up to 21 hours of battery life on top of more than 20% performance improvement over last-gen products.

While AMD’s desktop processors are fully unlocked regardless of variant, it is definitely a lot more challenging when it comes to laptops, as there’s just so much to consider in a laptop, especially when it comes to thermal and power headroom. But I guess AMD decided to go all out with the Zen 3 architecture, bringing us the AMD Ryzen 9 5900HX and Ryzen 9 5980HX, two overclockable Cezanne mobile processors. 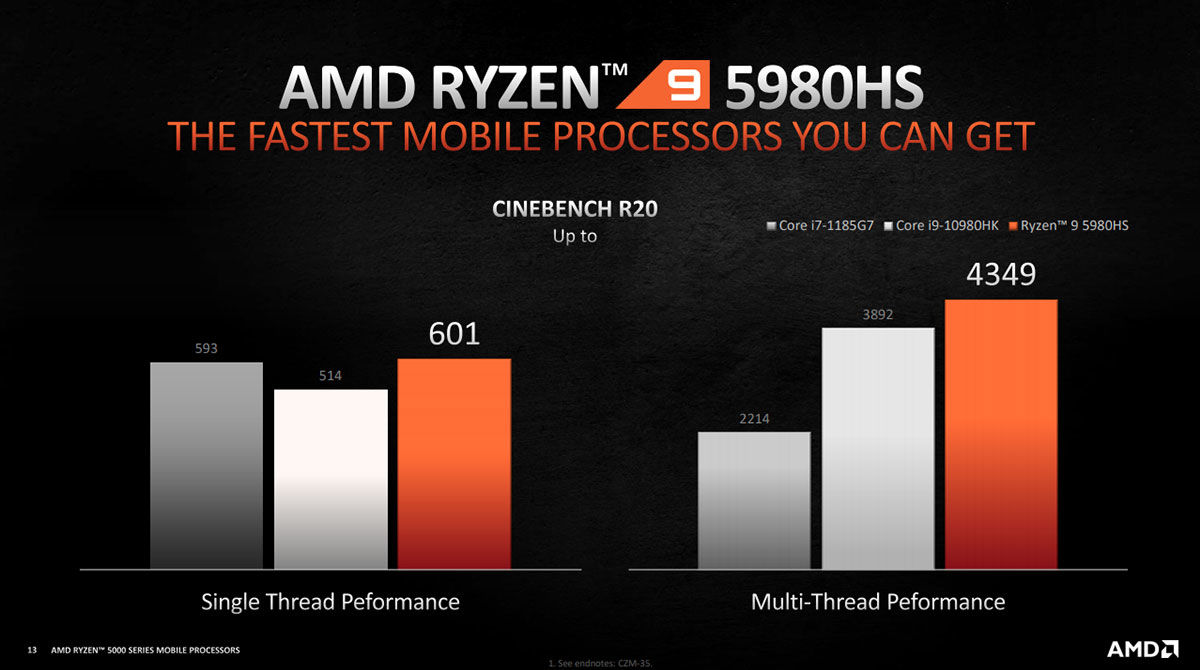 AMD has also released the flagship AMD Ryzen 9 5980HS, offering the highest out-of-box boost clocks in their product stack, while also sporting an optimized 35W TDP. AMD appears to be intent to compete aggressively against the new Intel Tiger Lake H35 processors in ultraportable gaming machines, with the new AMD Ryzen 5 5600HS, Ryzen 7 5800HS, Ryzen 9 5900HS and the aforementioned Ryzen 9 5980HS for a full lineup of 35W CPUs starting from the 6C/12T configurations.

For the OEMs who will be designing their laptops with more thermal headroom, there will also be the regular 45W TDP SKUs with slightly higher base clocks. Thanks to the AMD Zen 3 architecture, AMD is claiming that the AMD Ryzen 9 5980HS is capable of besting the Core i9-10980HK in Cinebench R20 by 17% in both single and multi-threaded performance, even while touting a lower TDP, proving just how efficient Zen 3 really is.

Pokdepinion: Can’t wait to see the designs that the AMD Ryzen 5000 series processors will appear in!