OPPO A96 Review – Glowing with Practicality 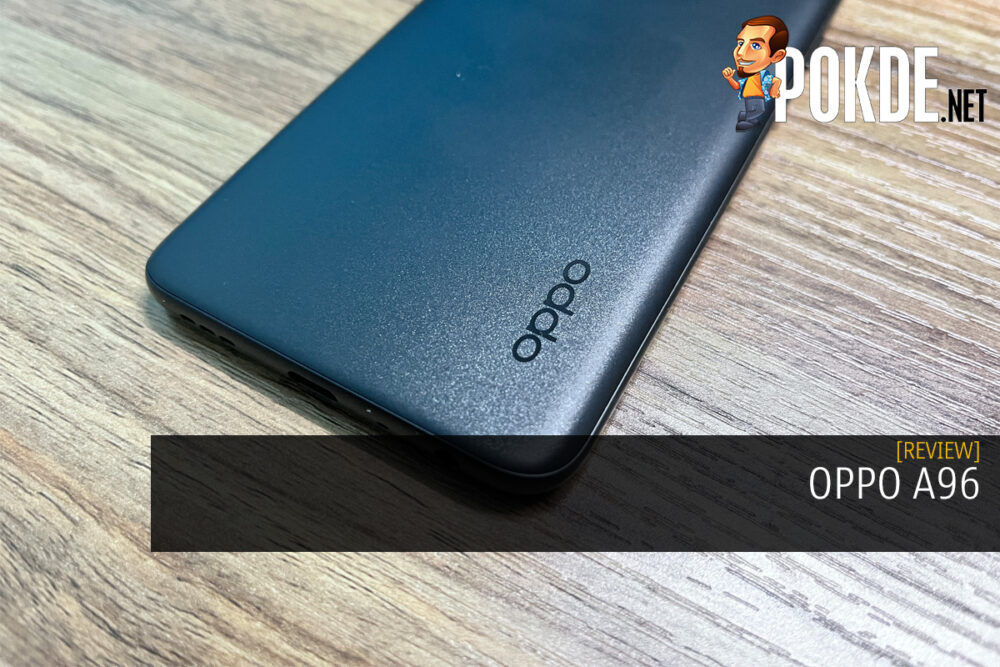 Looking for a smartphone packed with great features at an accessible price point? The OPPO A96 might just be the one you're been seeking. Is it worth your money? Let's find out.

For those of you who are looking for a practical, affordable smartphone for everyday use, the OPPO A96 can easily fit that bill.

Unboxing the OPPO A96 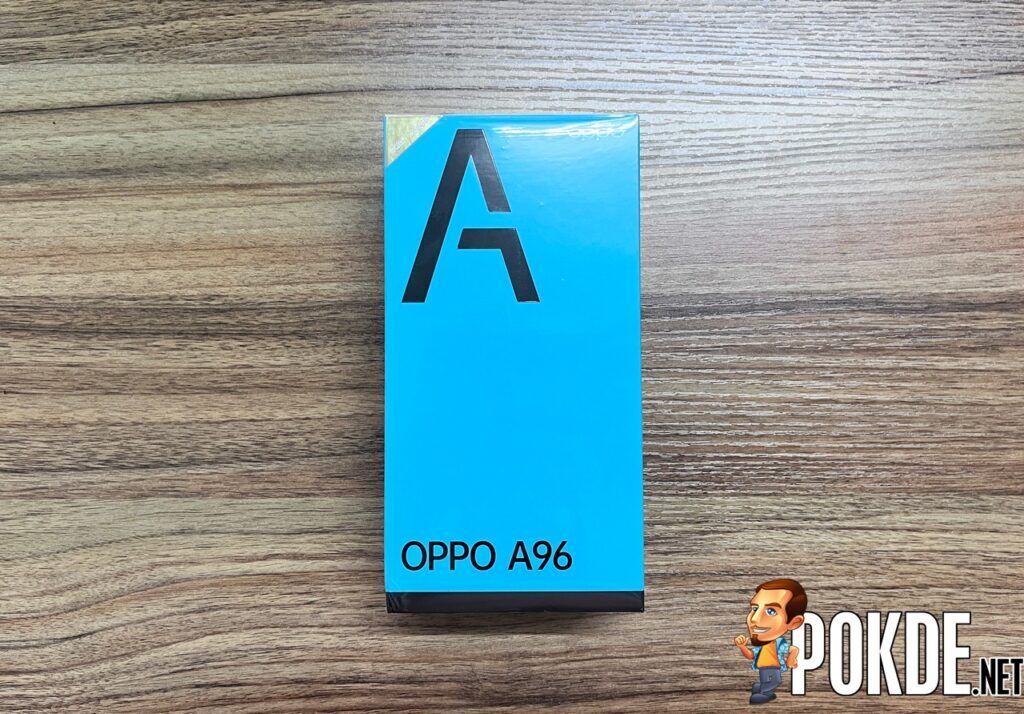 The box of the OPPO A96 is clad in light blue with a large “A” on it, denoting the series that the smartphone belongs to. On the top-left corner, you have the memory configuration of the device, which states 8GB / 256GB, the former for RAM and the latter for internal storage. Behind it, you have more key details and features of the device listed here. 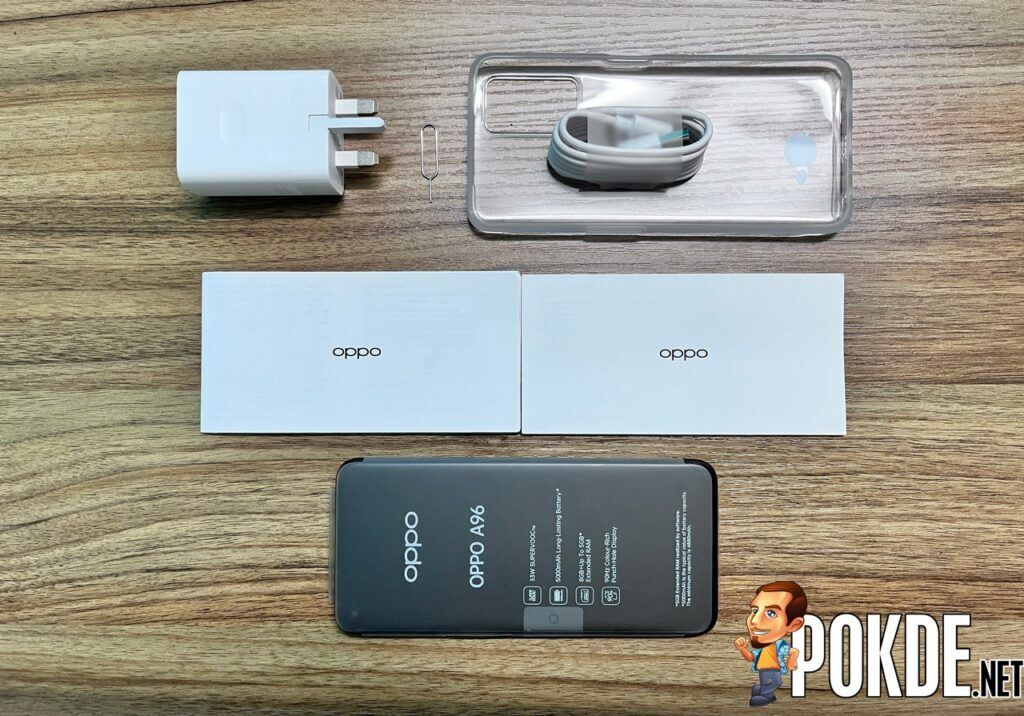 Inside the box, you can find the following items: 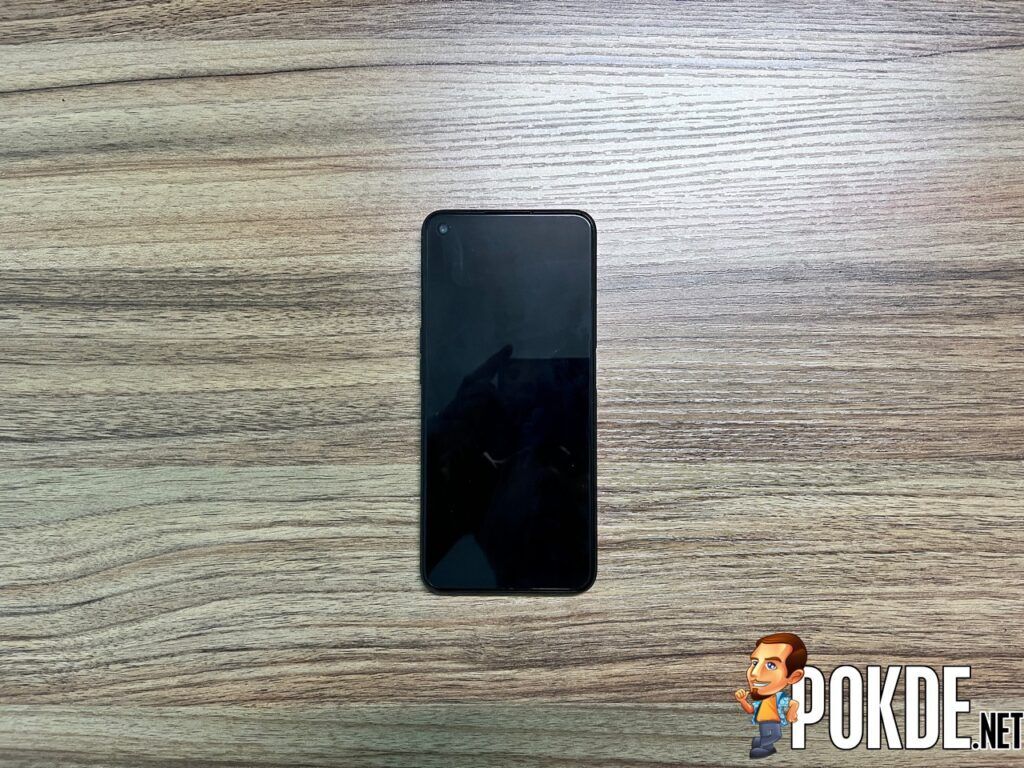 When you first look and hold it, the OPPO A96 looks to be on the smaller side as it’s to hold with one hand. However, it has a relatively large 6.59-inch Full HD+ IPS LCD display with a punchhole cutout for the selfie camera on the top-left corner. Bezels are quite thin on all sides with the exception of the bottom, so it looks like it’s sporting a bit of a chin as a result. 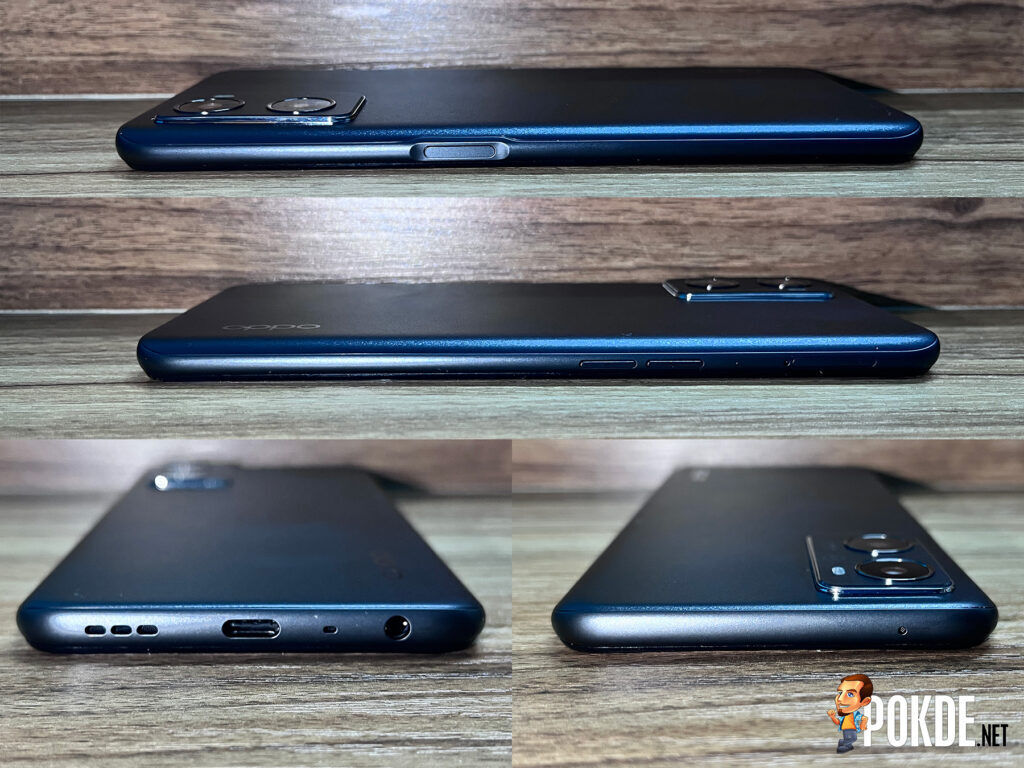 On the left side, you have the SIM tray slot and volume rocker. As for the right side, you have a power button which also doubles as a fingerprint scanner. There’s nothing to be found at the top but on the bottom, you can find a speaker grille, USB-C port, and a 3.5mm headphone jack. 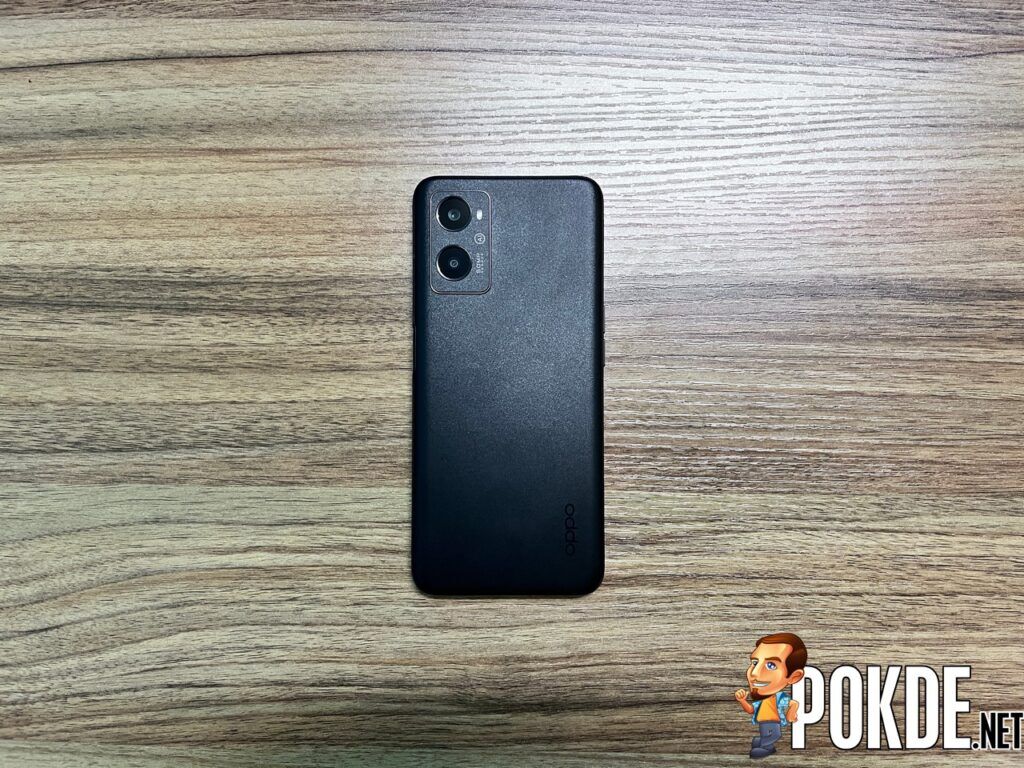 Flipping it over to the rear, you can see that we have the Starry Black colour variant for our review unit. The rear may look like it’s rough but it’s genuinely smooth to the touch. The great part here is that it’s not a fingerprint magnet, which is a major plus point. The clear protective case however does attract fingerprints, but it’s still great that they included that in the box. You can see the dual camera setup on the top-left corner, with a slight protrusion, and the OPPO logo on the bottom-right corner.

Overall, the OPPO A96 is certainly a good looking device with a build quality that seems to be above its price point. Personally, the Pearl Pink looks better but if you want something more low-key instead of one that really stands out, Starry Black will do the trick. Personally, I would like for them to make the bottom bezel smaller to eliminate the chin situation but it’s far from a dealbreaker so I can still accept it. Starting off our OPPO A96 review benchmark suite, the score achieved in Antutu v9 is decent given that the Snapdragon 680 is a midrange chip. It’s definitely far from flagship performance but it’s still practical. 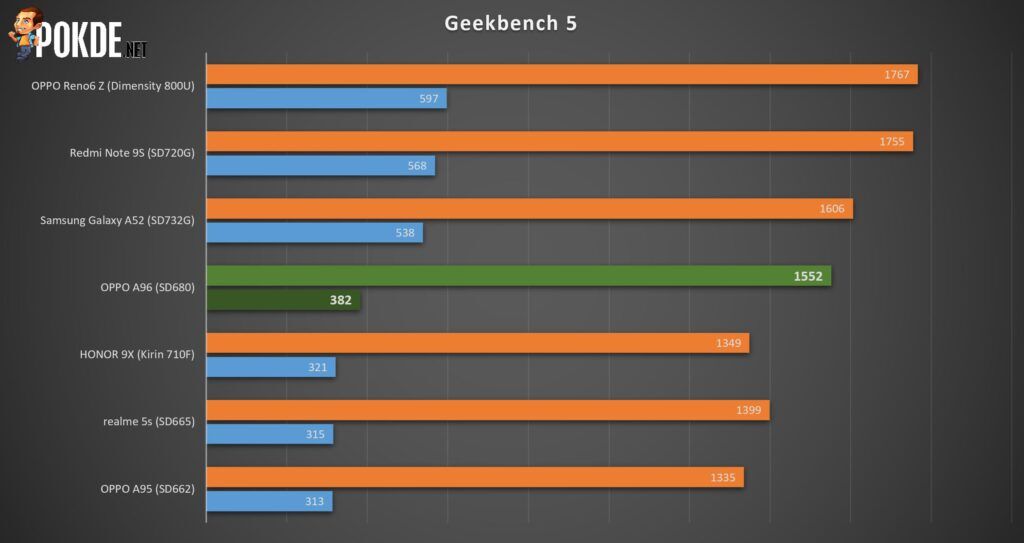 As for Geekbench 5, the OPPO A96 shows performance levels about on par for a midrange device, very close to matching with the Snapdragon 700-series chips as far as CPU performance is concerned. 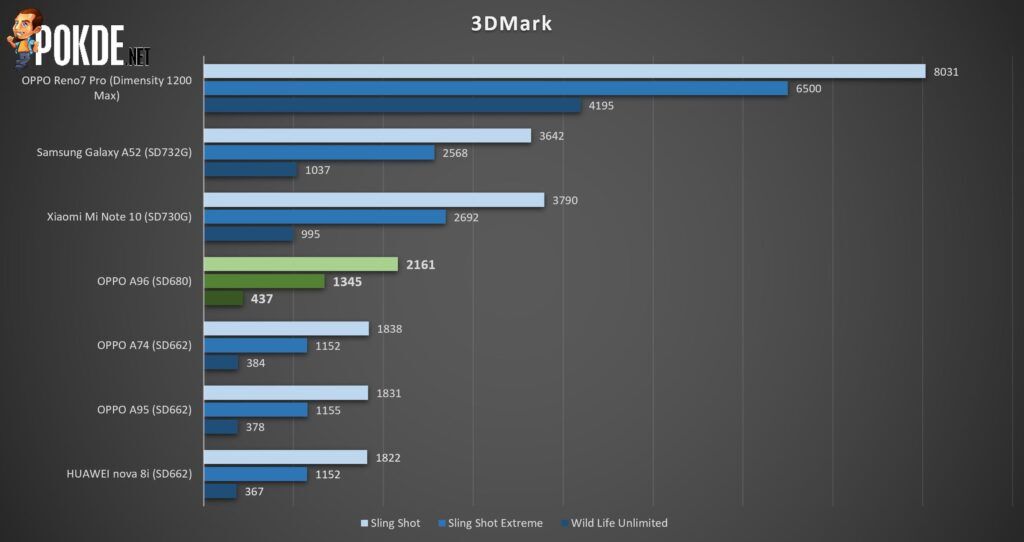 Moving on to 3DMark, this is where the OPPO A96 show signs of weakness. Graphical performance is the area it’s lacking, and it’s also where you can see a clearer distinction with the Snapdragon 700-series chips, which would be comparable as both are midrange chips. 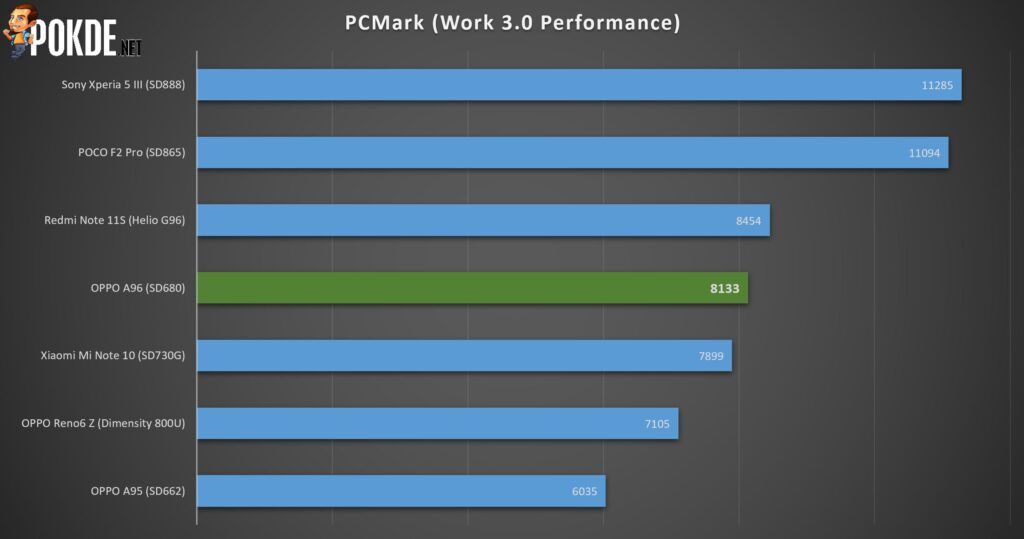 As for PCMark’s Work 3.0 benchmark, the OPPO A96 performed surprisingly well. It actually exceeded a Snapdragon 730G device, and is noticeably higher than a good number of Snapdragon 600-series devices in our list of benchmarked devices. This is an indication of the smartphone’s capability for day-to-day use. 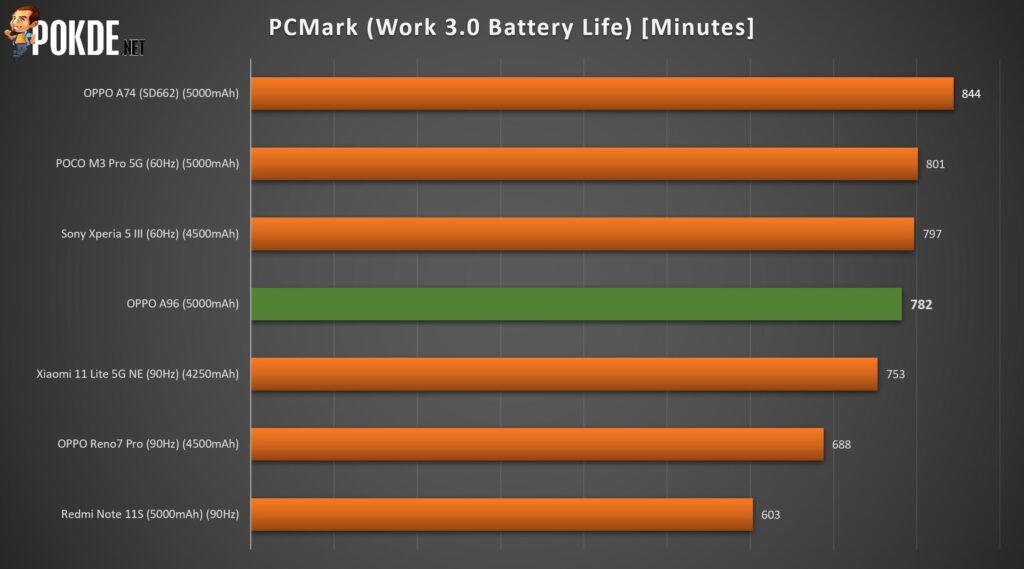 Lastly for battery life, the OPPO A96 shines very bright here as it managed to last 13 hours and 2 minutes (782 minutes) in the PCMark Work 3.0 endurance test. This is with the optimal refresh rate setting enabled, which will automatically switch between 90Hz and 60Hz, which is why we only ran this test once. For charging speed, I personally feel that it could be better, but here are the results with the 33W SUPERVOOC charger from 2% battery life:

As for real life use, I can easily get 2 full days with this device, sometimes 2 and a half if I’m being more frugal. I’m a light-to-medium user who’s mostly on social media, with quite a bit of texting and less than 15 minutes of calls on a daily basis. The OPPO A96 does have some measures to get more battery life, such as Sleep Standby Optimization, Power Saving mode when it your device reaches a certain battery percentage and more. From my experience, it does help quite a bit, but of course, it will die faster the more you use it.

Looking for something that can yield better performance? Check out our OPPO Reno7 Pro review by clicking right here. 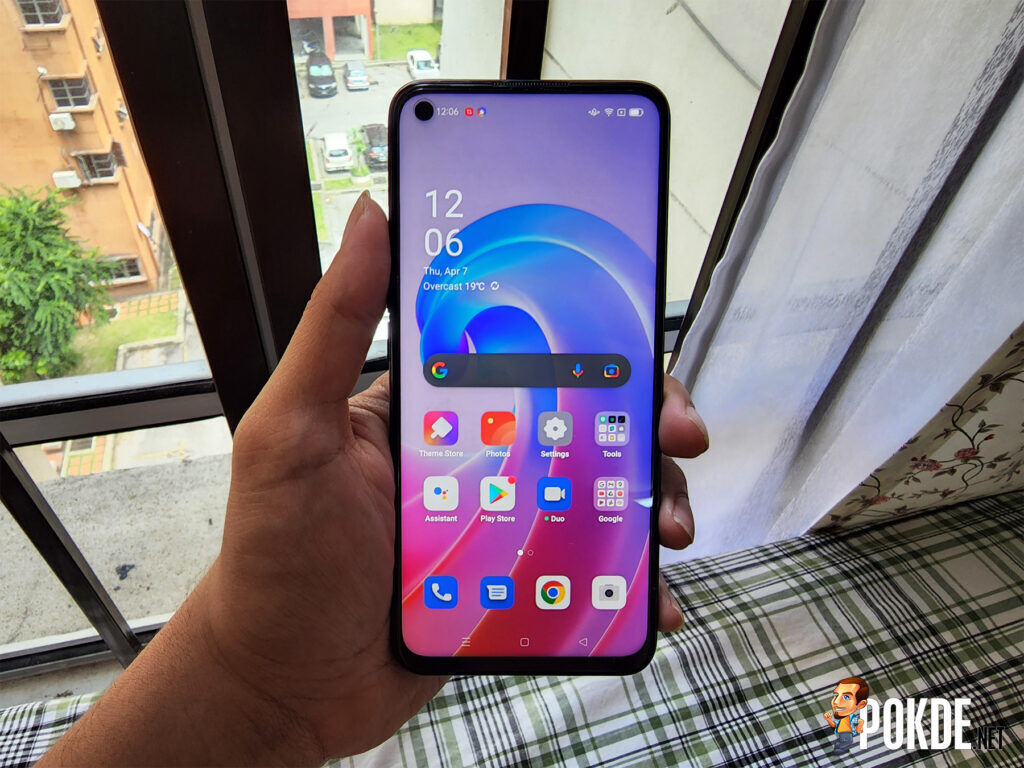 The OPPO A96 uses a 6.59-inch FHD+ Colour-rich Punchhole display with refresh rate 90Hz. The bezels are thin, with the exception of the bottom one which gives it a bit of a chin, and it’s capable of displaying relatively punchy colours with good dynamic range and contrast. The punchhole camera cutout is on the top-left corner so it’s less disruptive, and it’s bright enough to be used under direct sunlight with ease. 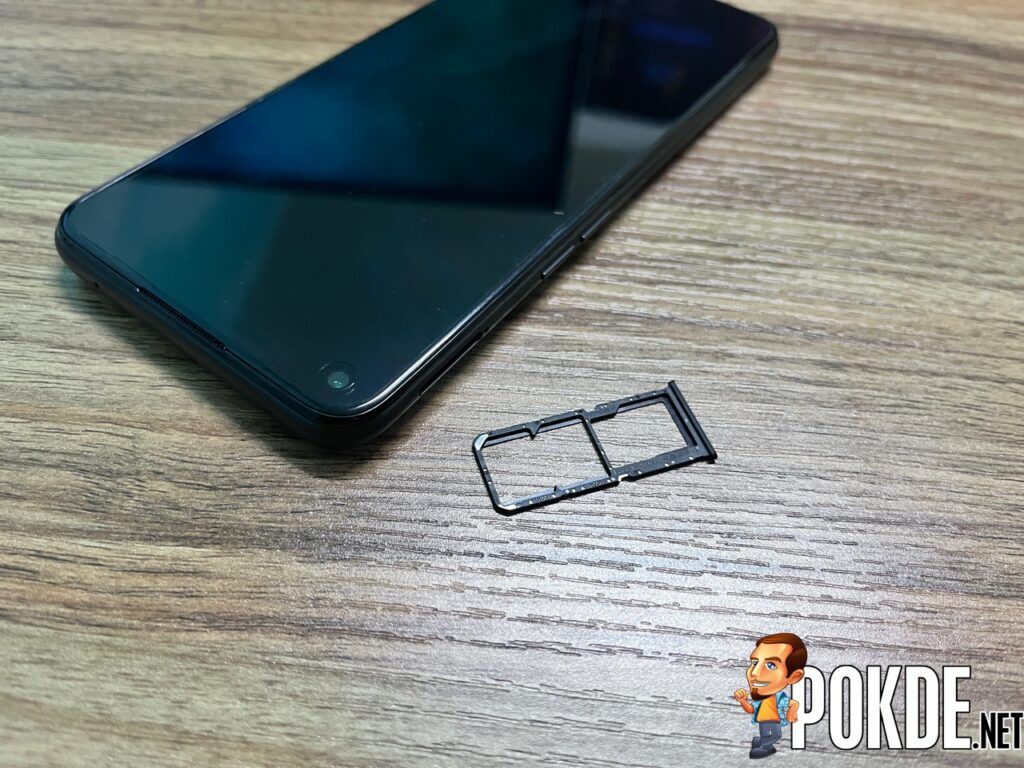 One thing I really like about the OPPO A96 is the design. It’s smooth, doesn’t get dirty easily, and it looks pretty good on its own. Subjectively, I’m a bigger fan of Pearl Pink but that might stand out too much for some people. The build quality isn’t close to flagship devices but it’s still pretty good as it doesn’t feel like it’s made of cheap plastic. The added bonus of having a clear protective case included is a plus point but I would rather not use it since that smudges way too easily. 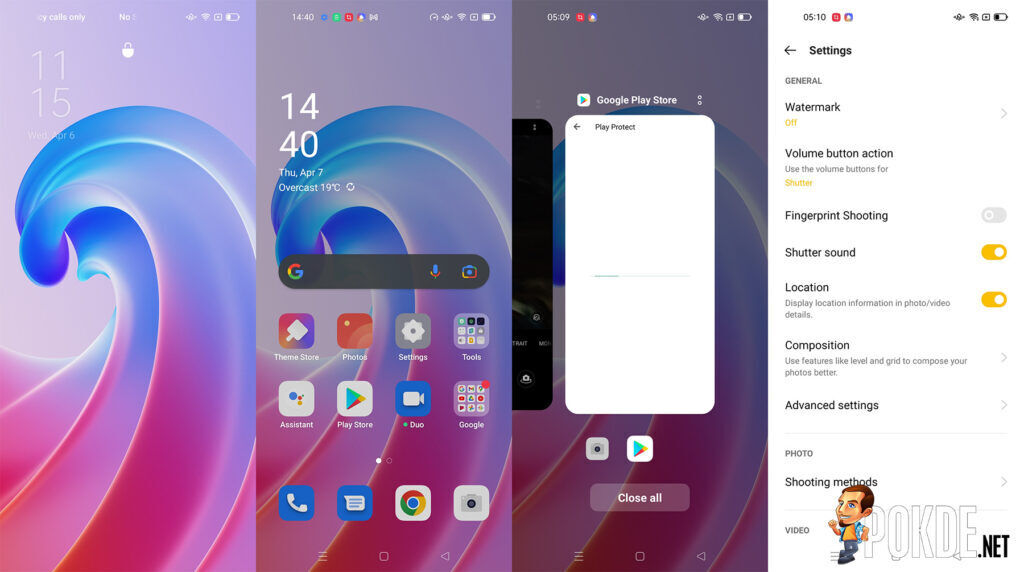 The OPPO A96 is running ColorOS 11.1 based on Android 11. By default, there is no app drawer so everything will be listed in the Home Menu by continuously swiping to the right. If you prefer having the usual app drawer, you can easily enable that via Settings. Generally, it’s user-friendly and versatile to cater to users’ preferences. While it runs very smooth for the most part, the ability to add up to 5GB of virtual RAM in case it runs out of memory is the cherry on top for a good user experience.

In case you are wondering, the fingerprint scanner is located on the power button itself, giving it a dual-use purpose. It’s certainly one of the better ones around as it works very fast and reliably as well. Personally, I’d rather have this over under-display types but there’s no denying that the latter has seen significant improvements. Regardless, you get to keep the OPPO A96 secure without sacrificing on convenience. 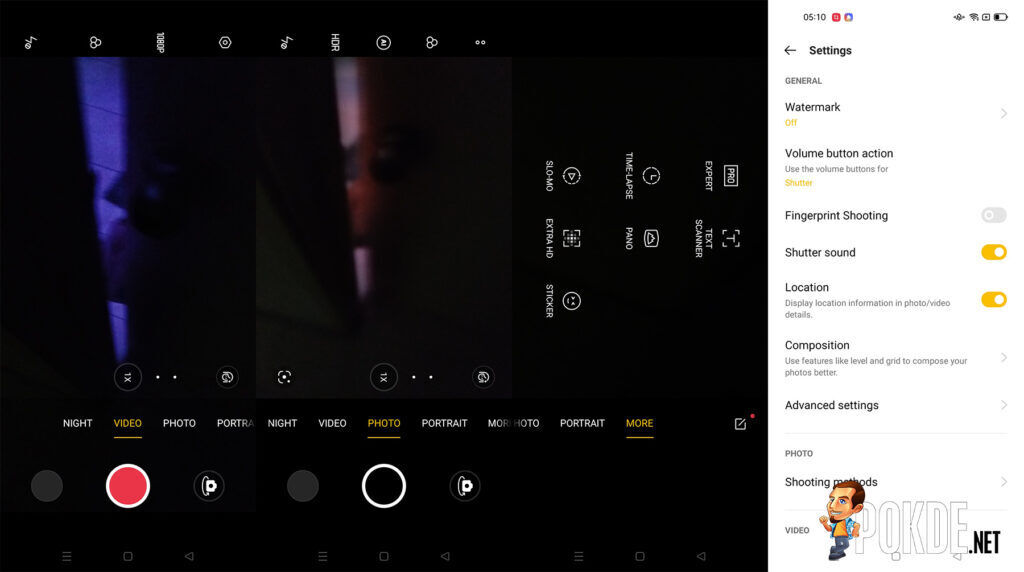 The native camera UI on the OPPO A96 seems to be your run of the mill Android shooter experience. You can change shooting modes by swiping left and right, the last one will contain even more modes that you can put as its own quick access tab, adjust AI settings, and more. Generally, it’s straightforward and easy to use but for those who prefer more controls, there’s always the good ol’ Pro Mode for you.

As for camera quality, the OPPO A96 can do a decent job overall but it’s very dependent on lighting. When lighting is good, you get relatively good results with good details but colours look a little washed out. Portrait shots are a bit of a hit and miss, and it would outright refuse to capture if there isn’t an adequate amount of light. When it does work, it manages to separate the subject from the background well, though the softening effect seems rather noticeable here. Selfies are pretty much on par for a product at this price. 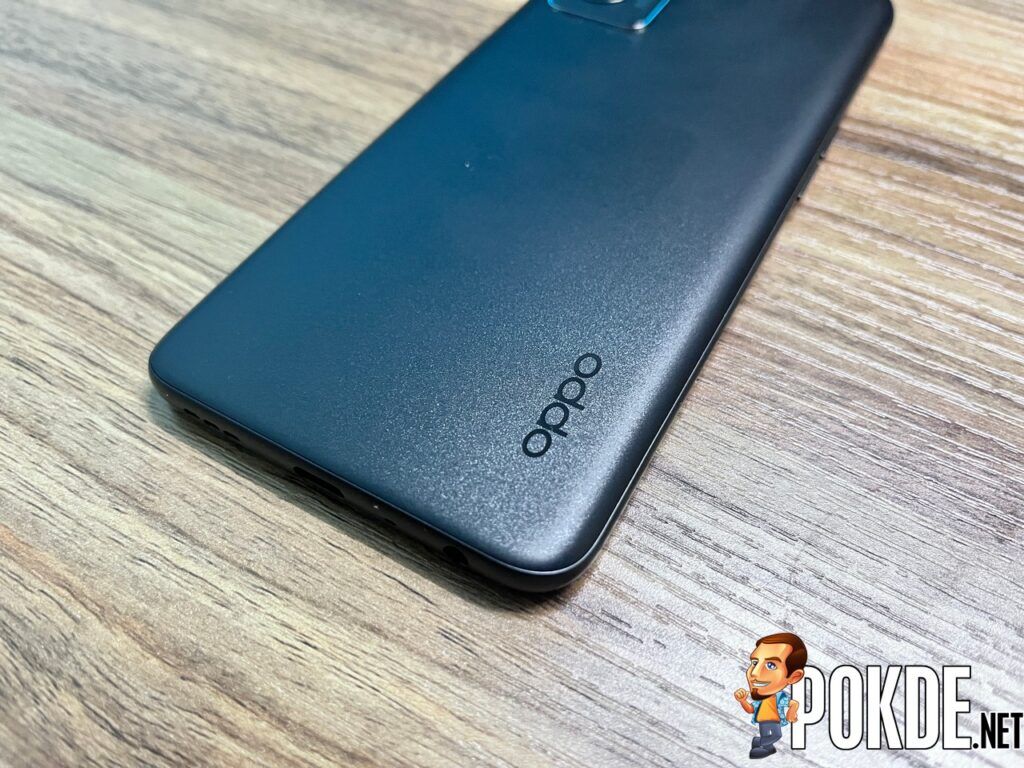 For those of you who are looking for a practical, affordable smartphone for everyday use, the OPPO A96 can easily fit that bill, especially given its affordable RM1,299 price tag. There’s nothing outright bad about the device, just a matter of whether you really need extras here and there or not (like better cameras or graphical performance), and it has good looks to boot. At the end of our OPPO A96 review, I award this smartphone with our Silver Pokdeward.

Big thanks to OPPO Malaysia for sending us this smartphone for the purpose of this review.

Aiman Maulana
Jack of all trades, master of none, but oftentimes better than a master of one. YouTuber, video editor, tech head, and a wizard of gaming. What's up? :)
Pokde Recommends
4G4G LTE90HzA2DPAdreno 610AndroidAndroid 11AptX HDGadgetNewsSmartphone
MORE
Read More
23898 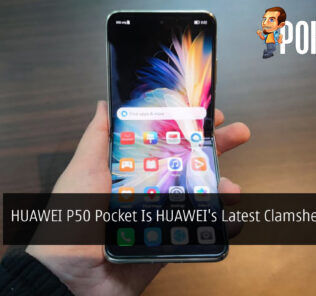 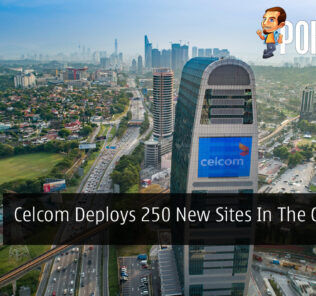 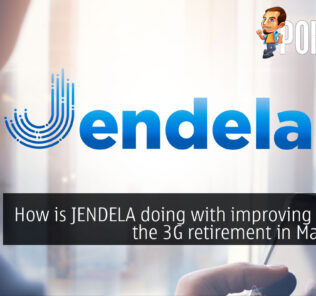 How is JENDELA doing with improving 4G and the 3G retirement in Malaysia?
Previous

Samsung Galaxy A73 Unboxing and First Impressions
Next

OPPO A96 with 256GB ROM is a Powerhouse Device for this Raya Celebration and ...
Latest Video
Read More
840