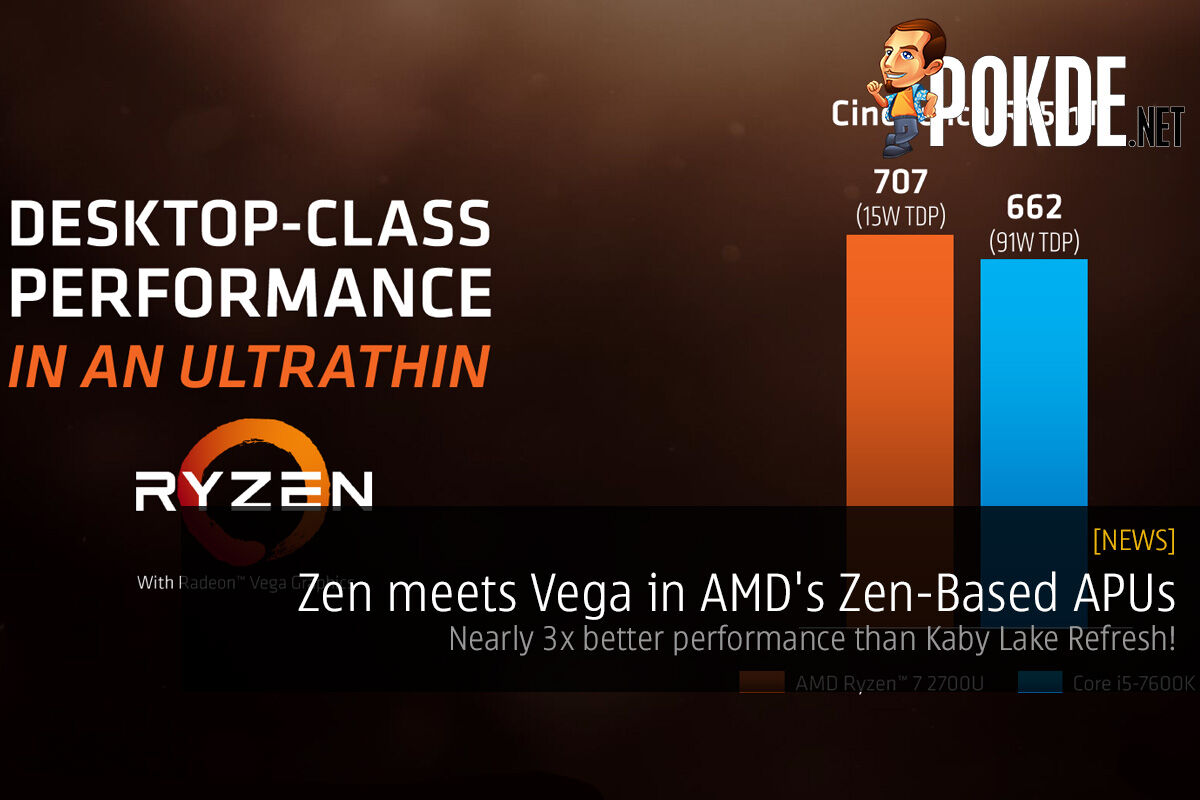 AMD is finally ready to enter the mobile space. While their Ryzen CPUs were successful and their Vega GPUs… not so much, the latest APUs combining the best technologies from AMD seems right on track to dominate. AMD’s previous generations of mobile APUs were pretty much unable to compete with Intel’s offerings except on the graphics front. However the combination of Ryzen and Vega is definitely potent enough to take on Intel’s latest Kaby Lake Refresh processors. The AMD Ryzen 7 2700U and Ryzen 5 2500U for mobile are ready. 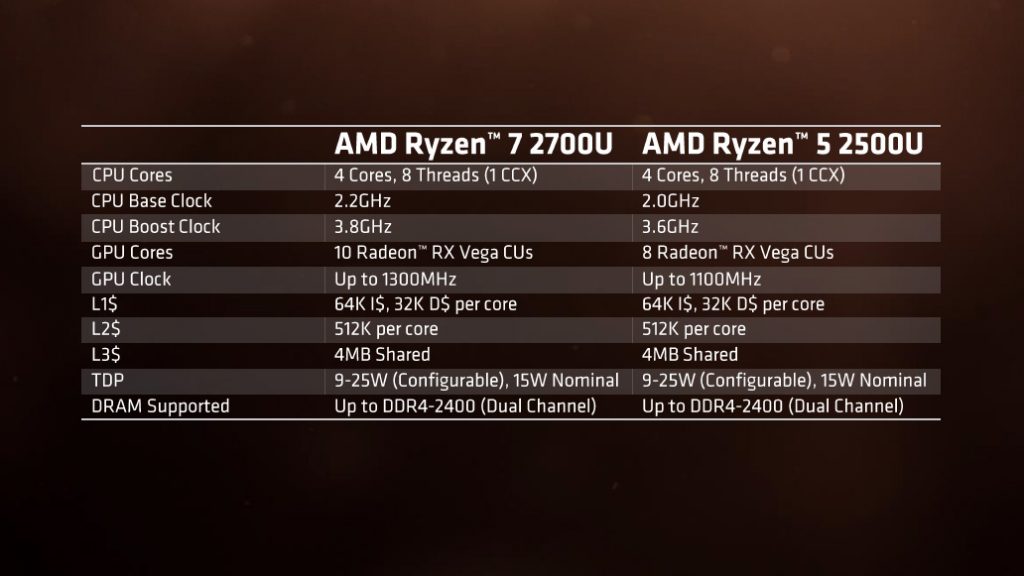 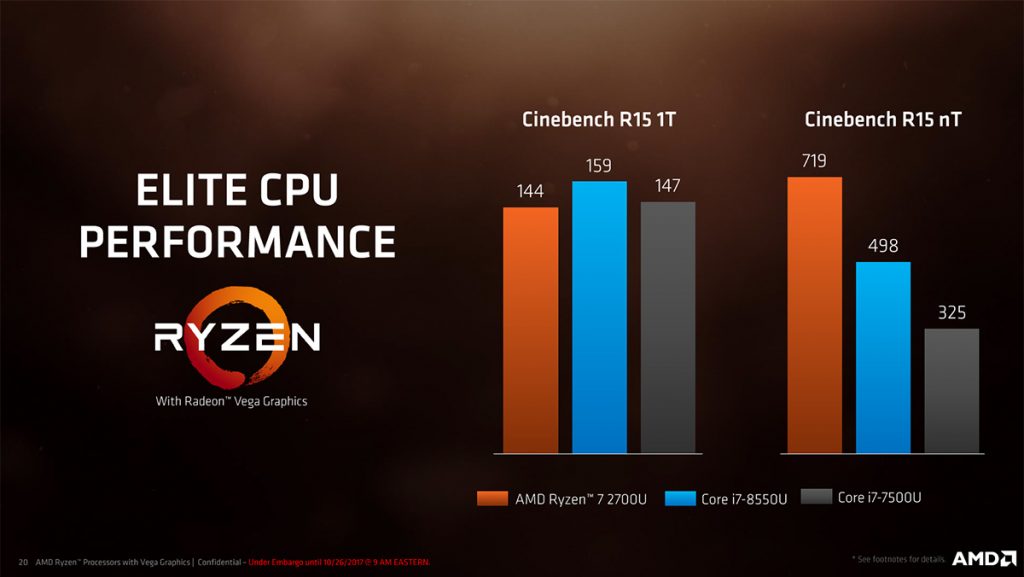 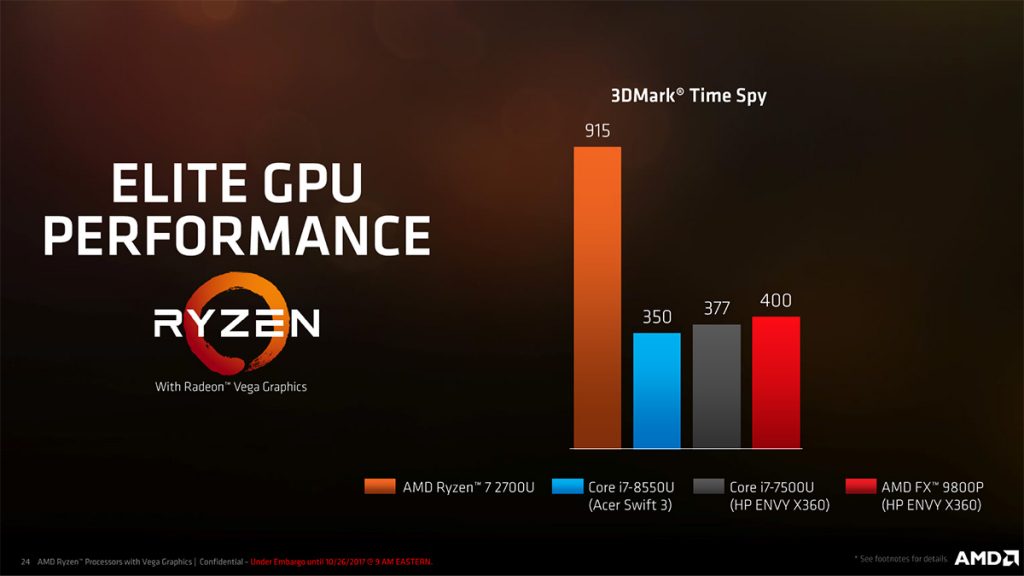 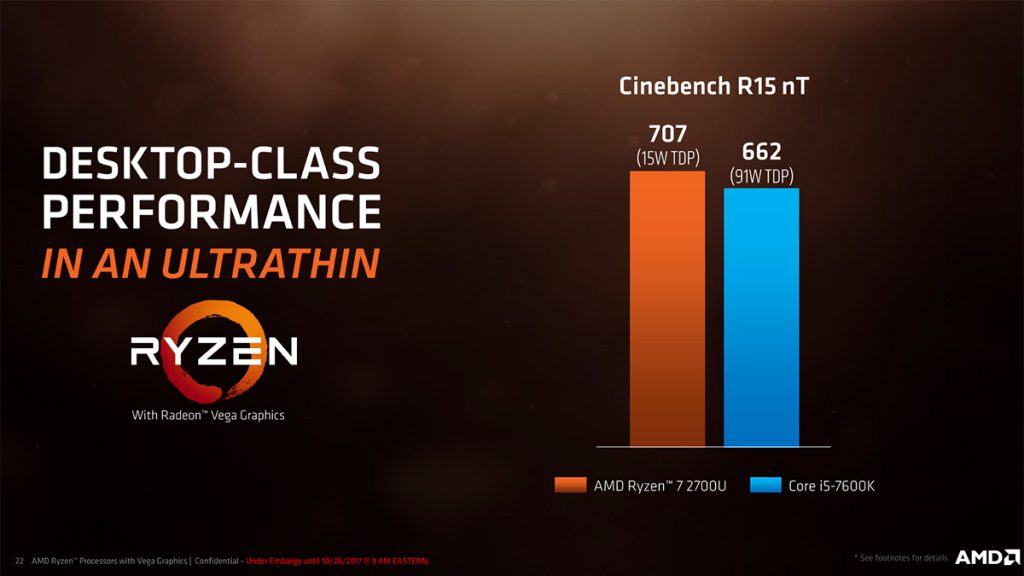 How powerful is it though? Enough to be more than 44% faster than the Core i7 8550U in Cinebench R15’s multi-core benchmark. Or 6% faster than an Core i5 7600U which has a 91W TDP. That’s getting more performance with just 16% of the TDP of the desktop CPU! It’s GPU performance is certainly unparalleled, with it scoring more than double what the Core i7 8550U is capable of in 3DMark Time Spy. 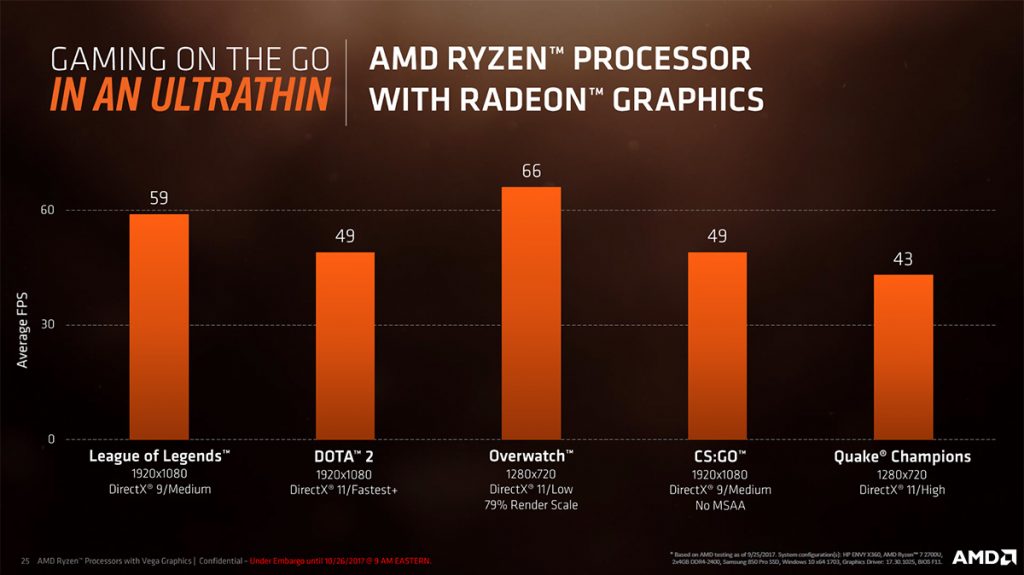 What users will be more interested in is of course the ability to game without a GPU. And the AMD Ryzen 7 2700U in the HP ENVY X360 with 2 x 4GB DDR4 2400 is definitely capable of gaming pretty decently, albeit with reduced graphics settings. Still, to be able to enjoy this kind of performance in a 2.15kg 15.6″ convertible is quite cool. 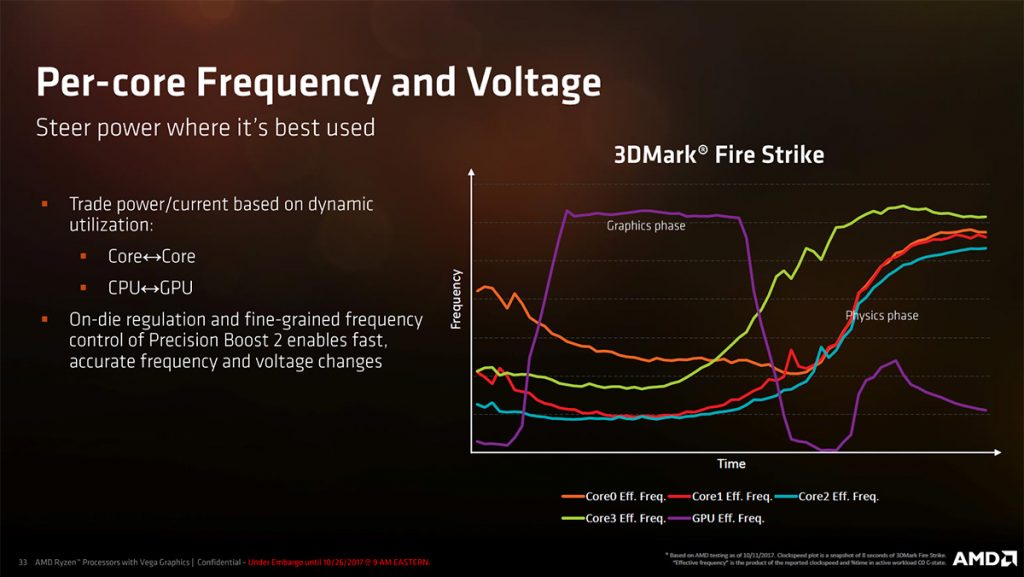 Power is a very limited resource in mobile platforms. AMD Ryzen Mobile APUs will dynamically allocate power to the GPU and CPU cores, depending on utilization. The 3DMark Fire Strike benchmark primarily puts the GPU to test before switching over to test the CPU cores in the physics phase, and with AMD’s Precision Boost 2, power is allocated to wherever needs it more. 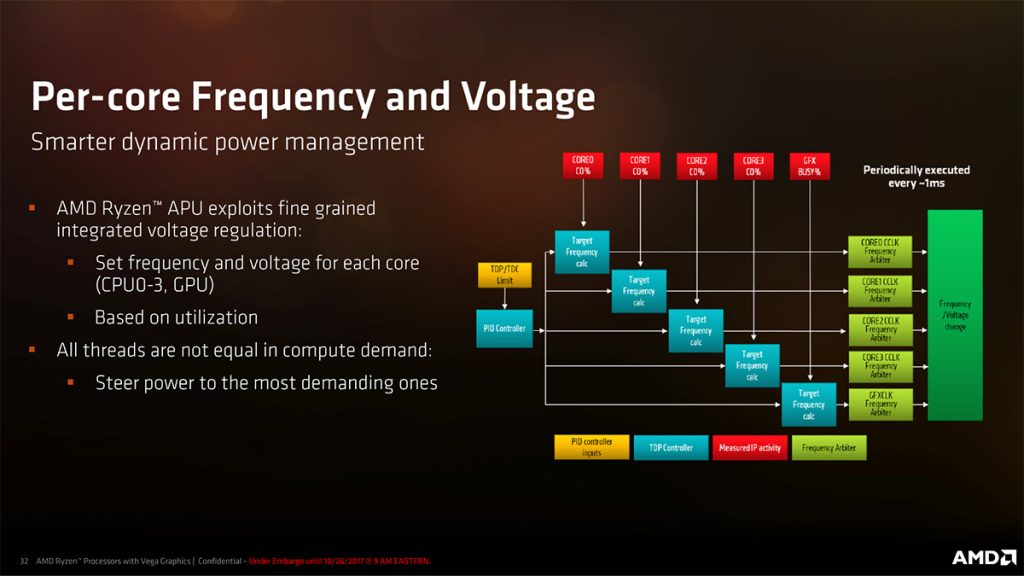 The voltage and frequency of each core and the GPU can be modularly fine-tuned based on the sensors, current loading and available power. Since you usually won’t be loading all the cores and the GPU at the same time, AMD’s way of managing the power will allow you to enjoy cooler temperatures and potentially better performance without an increase in power consumption. 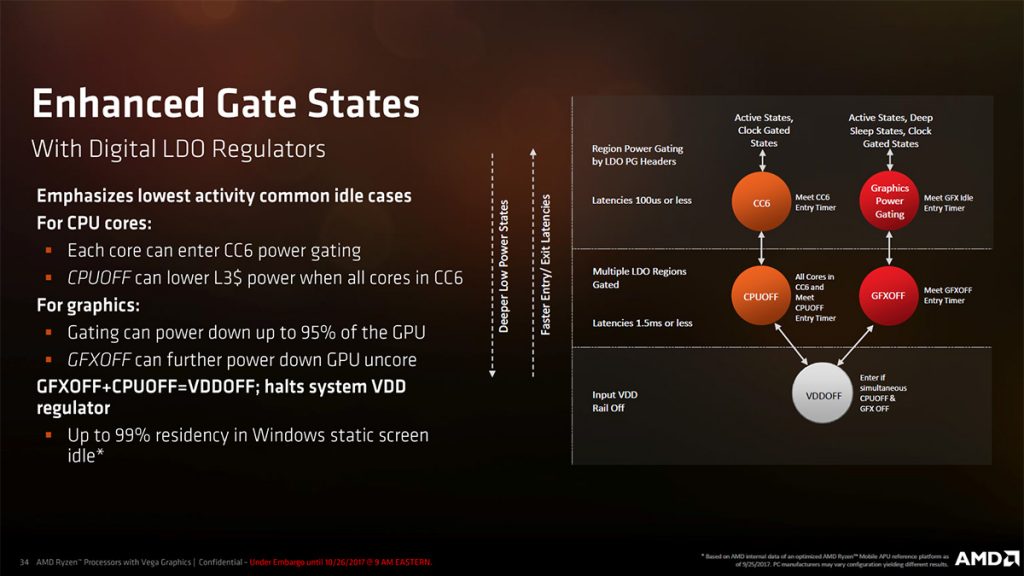 With more granular control of the CPU cluster and GPU, the AMD Ryzen Mobile APUs’ CPU cores feature a CC6 state where most parts of the core will be powered down except for the L3 cache, which will be ready for another core to use. The entire CPU cluster can enter CC6 as well, with the L3 cache disabled too for a CPUOFF state for better efficiency at the cost of higher latency when exiting the state.

The GPU is also capable of powering down in a similar way, with the ability to power down up to 95% of the GPU. The GPU can also enter GFXOFF state, for further power reduction. When CPUOFF and GFXOFF are enabled, the system will enter VDDOFF, where most of the processor is disabled. The APU features a frame buffer to update a static image on the screen at 60 Hz without firing up the GPU or CPU, so you can get the processor in VDDOFF state 99% of the time when idling on a static Windows screen with no background process firing on the cores for massive power savings. 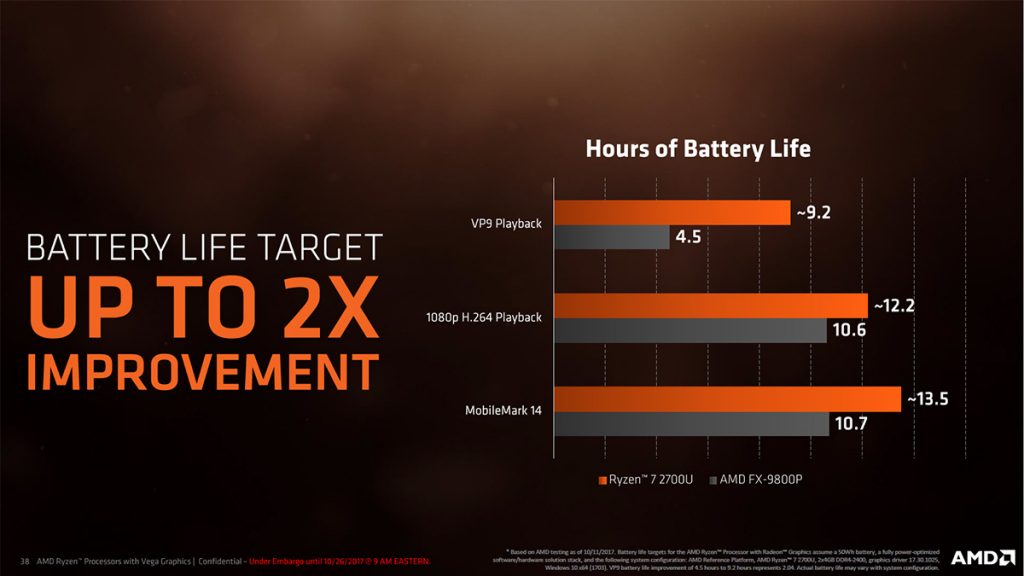 That’s not all though. Ryzen Mobile sports Dual Region Power Gating with Infinity Fabric. This allowed AMD to save power when consuming multimedia content which support hardware acceleration. The Ryzen Mobile APUs are capable of VP9 and H.265/HEVC decoding, allowing most of the CPU and GPU to remain in the lower power states. These technologies let you enjoy 15% battery life improvements watching H.264 videos and up to 2x longer VP9 playback than the AMD’s 7th Gen “Bristol Ridge” APUs. 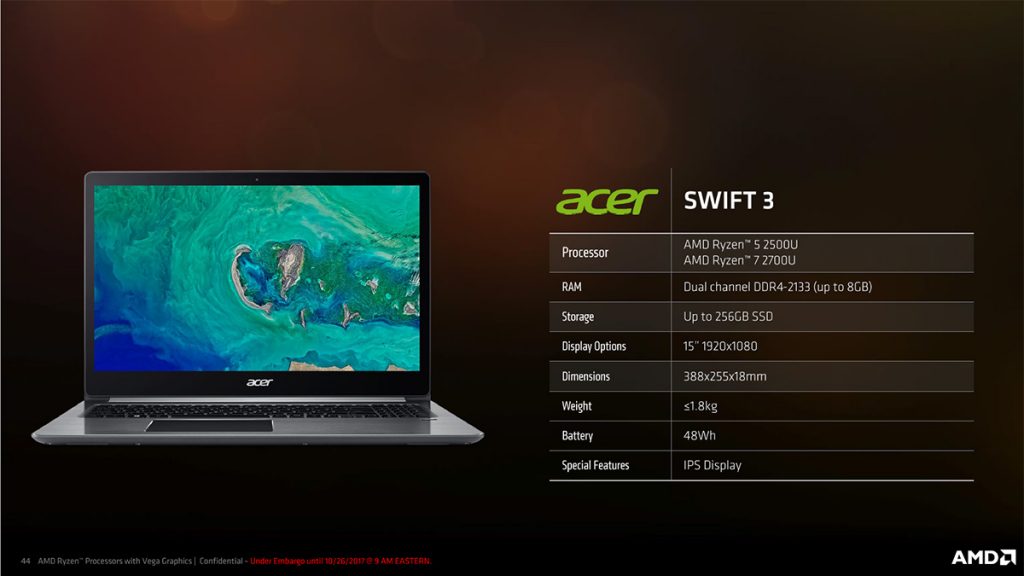 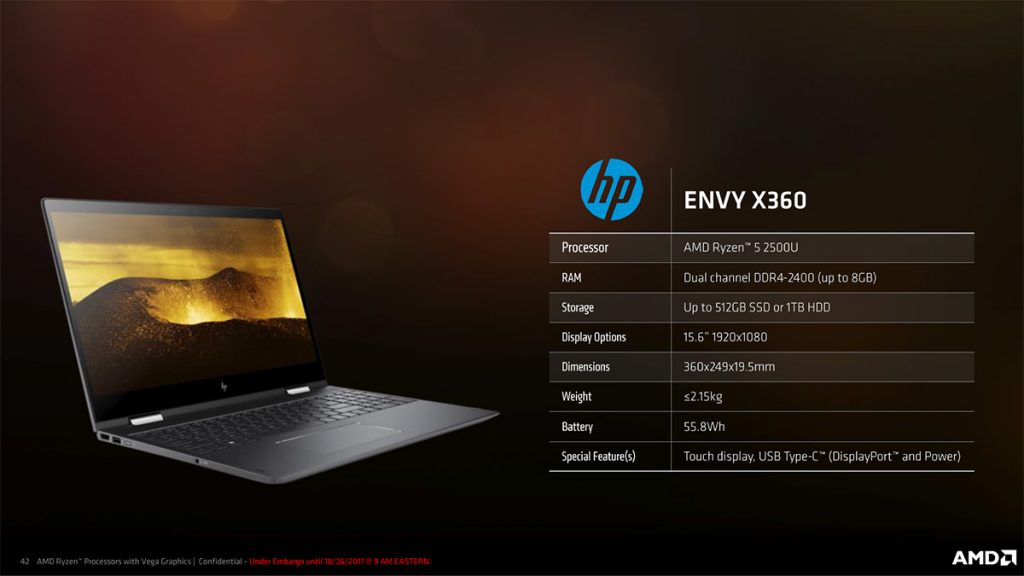 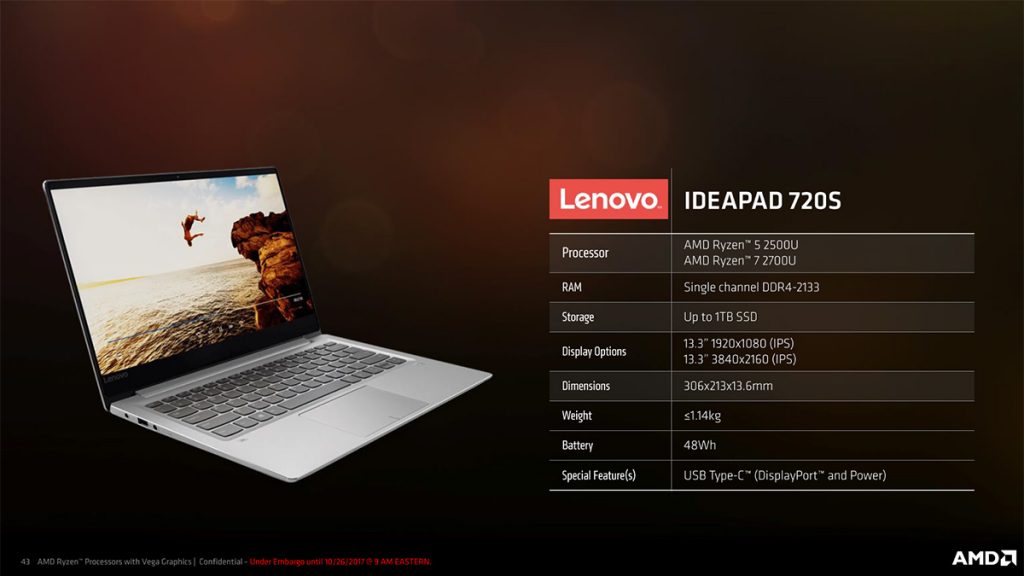 AMD has partnered with HP, Acer and Lenovo for the initial introduction of the AMD Ryzen Mobile APUs. We are looking at the convertible ENVY X360 from HP, an ultralight IdeaPad 720S coming in at just 1.14 kg and the averaging Acer Swift 3 which comes in at 1.8 kg. The first batch of laptops with Ryzen Mobile APUs will be available this holiday season, so prepare your wallets.

Pokdepinion: I can’t wait to try out a laptop with the AMD Ryzen Mobile APUs! In fact, I am now really interested to see what AMD can throw in the ring for the desktop APUs now.

Garena Brings League Of Legend Worlds To You – Available At Selected TG...
Next