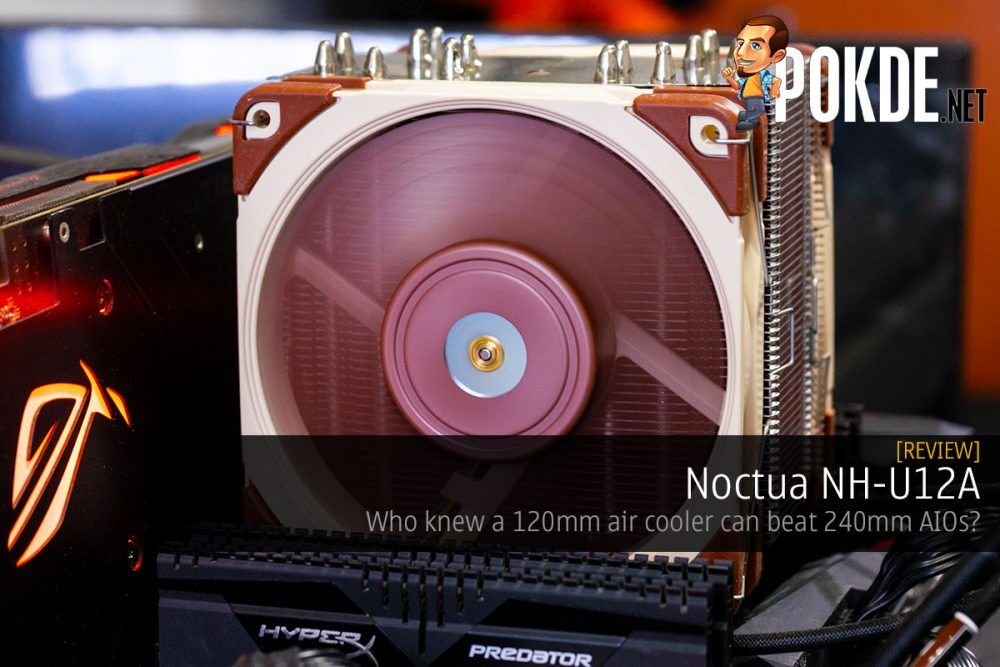 Noctua's latest Noctua NH-U12A uses their flagship NF-A12x25 fans, allowing them to push the limits of air cooling while maintaining the silent operation Noctua is known for.

- You either love the brown fans or hate them

The Noctua NH-U12A runs quietly and keeps even the most demanding CPUs cool.

The Noctua NF-A12x25 were impressive fans, with silent operation while still delivering excellent performance. The next step was of course to design a cooler to take advantage of it, thus the birth of the Noctua NH-U12A. Instead of the five heatpipe design of the preceding Noctua NH-U12S, Noctua did the unthinkable and crammed SEVEN heatpipes into the Noctua NH-U12A. For comparison sake, the flagship Noctua NH-D15 has only six. Will we see the king of air coolers dethroned?

Noctua doesn’t go with striking colors and vibrant visuals, instead sticking to their basic white and brown color scheme. It’s distinctive, and any enthusiast worth their salt would already be able to recognize Noctua’s brown by now. 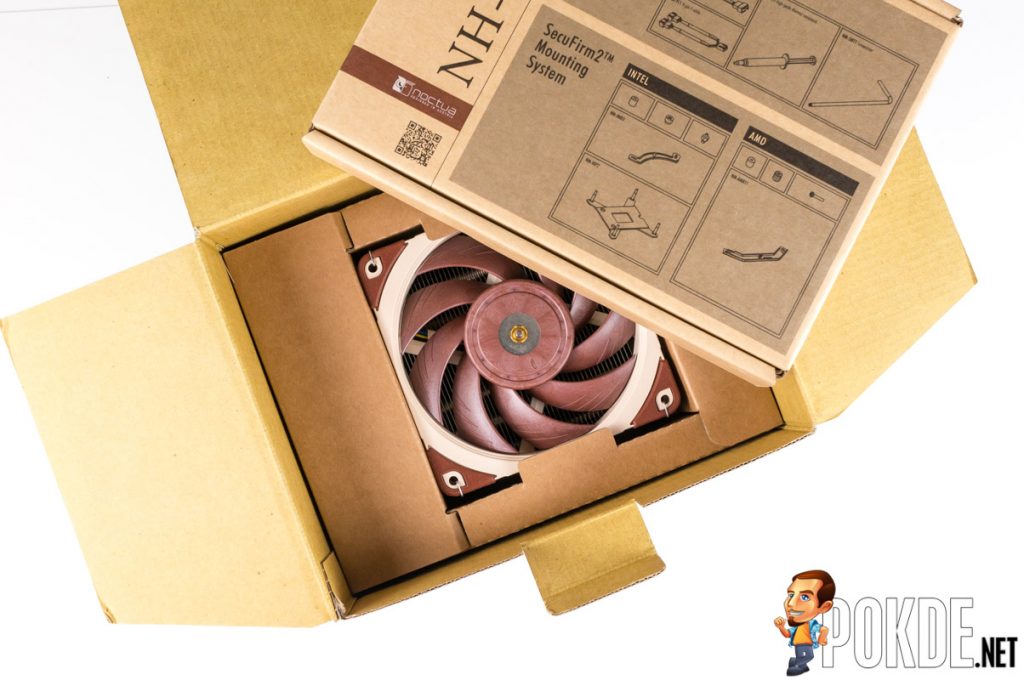 In the box is yet another box, under which lies the cooler itself. 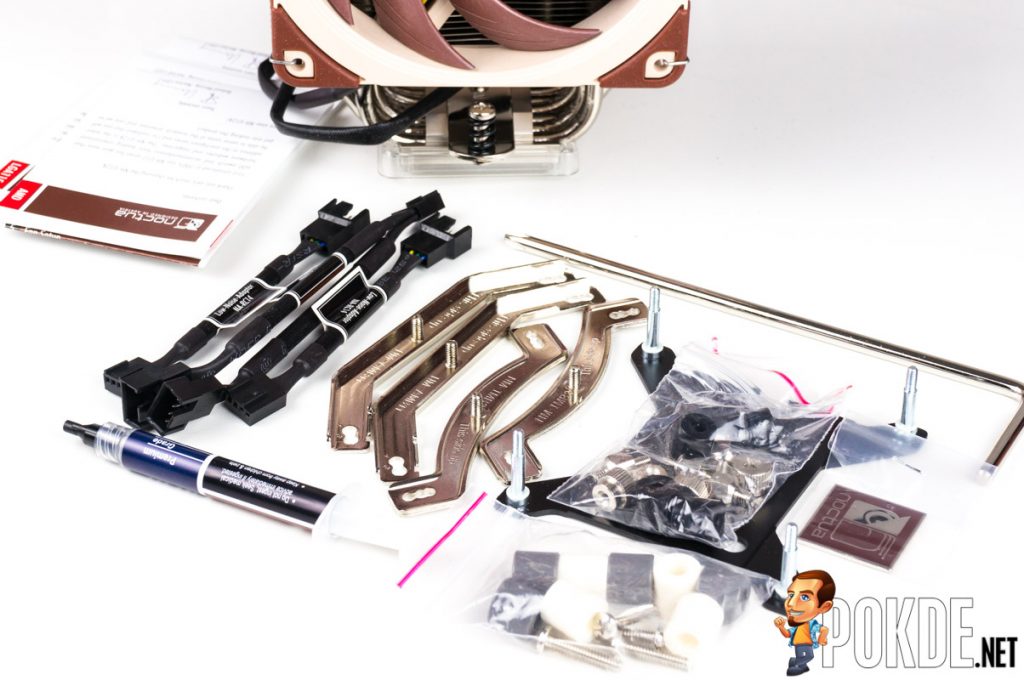 The contents are very rich, with the new Noctua SecuFirm 2 mounting system supporting everything from the AMD FM1 socket all the way up to the Intel LGA2066 HEDT socket. There’s also low noise adapters, a PWM splitter cable, a huge tube of Noctua NT-H1 thermal paste and even a metal Noctua case badge. Really good stuff. 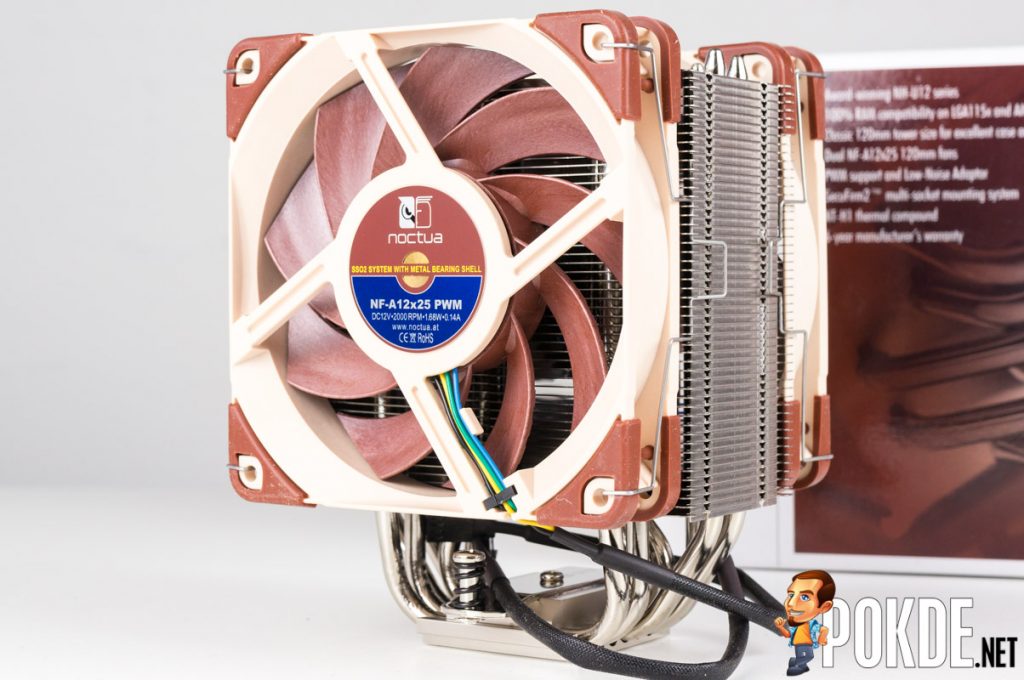 While most of their competition has succumbed to the RGBae craze, Noctua is steadfastly maintaining their brown colored fans across their range. The Noctua NH-U12A also maintains the same utilitarian look, with the whole heatsink gleaming in silver. Bare aluminium and nickel-plated copper. I do wonder if having bare copper would have complemented the brown fans though. 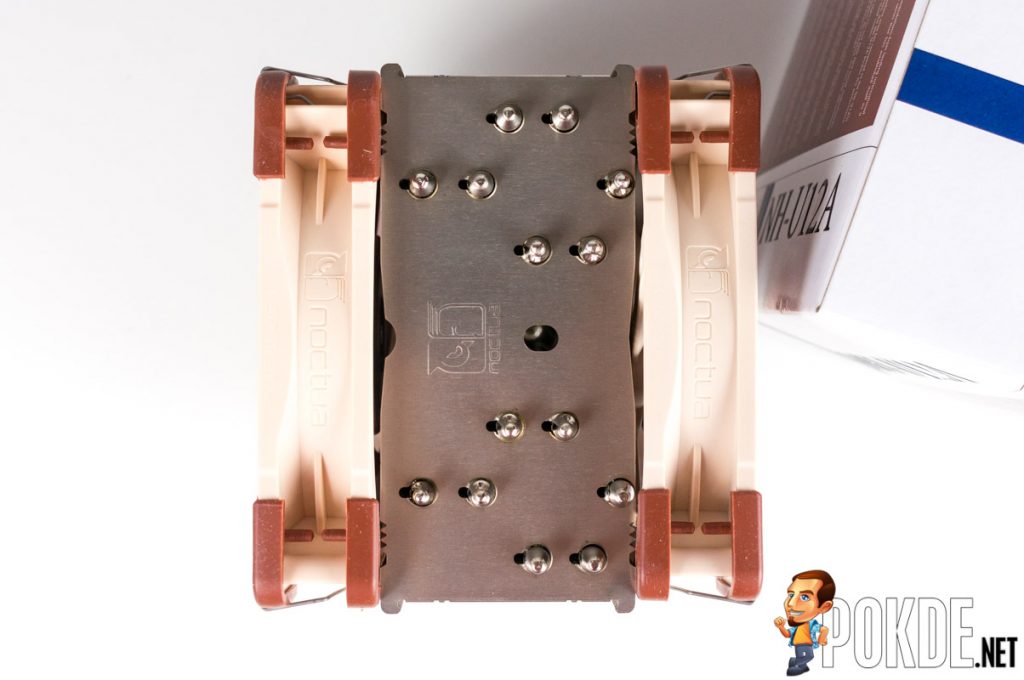 Taking a look from the top, the Noctua NH-U12A’s no-nonsense design is even more apparent. With the exception of the Noctua emblem on the fans and heatsink, the rest mean business. It’s one thick cooler too, so you should check if your motherboard has room for it. 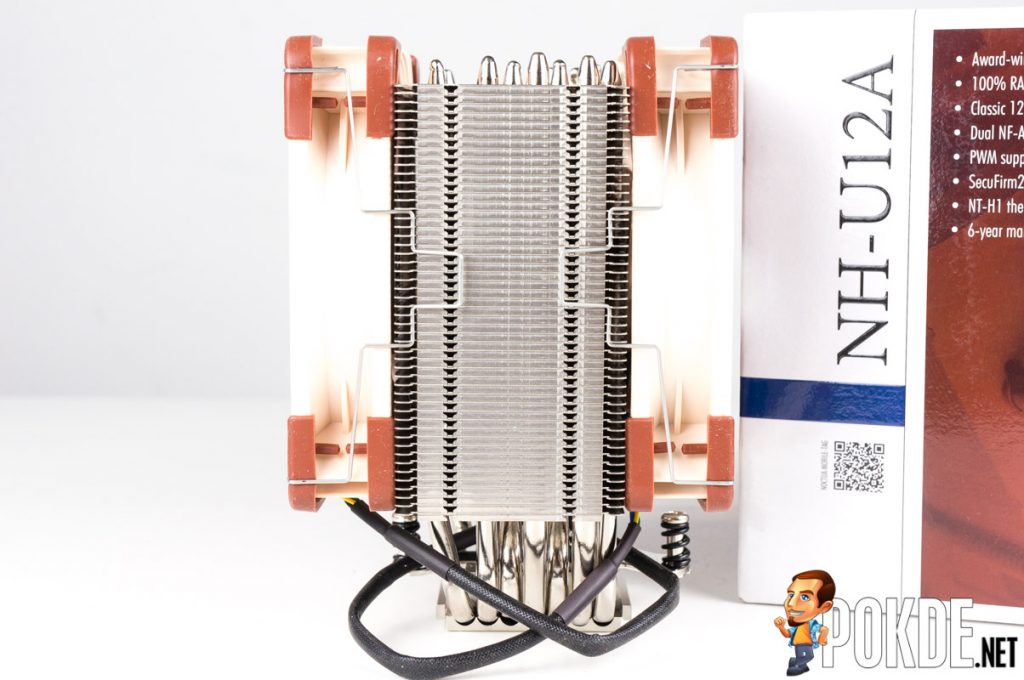 You can see that the cooler is slightly offset to maximize compatibility with most platforms. I say most, because we did run into some issues with our Intel X99 (LGA 2011v3) motherboard. You can also see the very simple fan clips that Noctua uses for all their coolers. As the Noctua NF-A12x25 fans feature thick rubber vibration dampeners at every screw hole, there really is no need for more complex fan mounting mechanisms. You can really see that Noctua follows the K.I.S.S. (Keep It Simple, Stupid) ideology to a fault when it comes to the Noctua NH-U12A’s aesthetics. 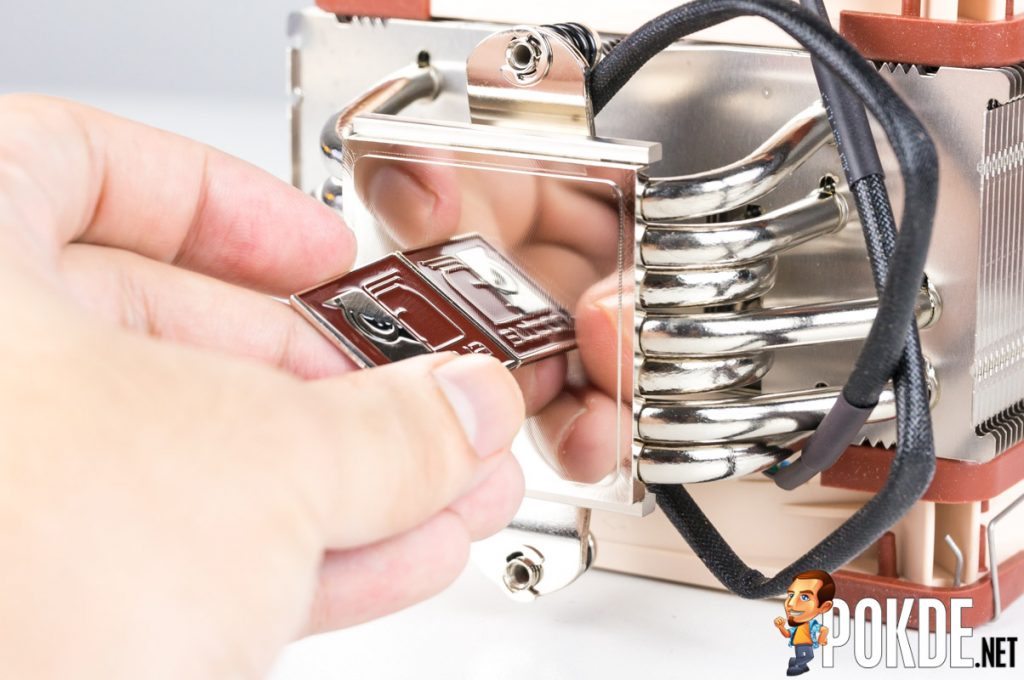 We see the copper baseplate here on the Noctua NH-U12A is nickel-plated, just like the rest of Noctua’s lineup of air coolers. It is machined to very fine tolerances, as you can see it is almost a mirror finish here. The seven heatpipes run through here, wicking heat away from your processor’s IHS. 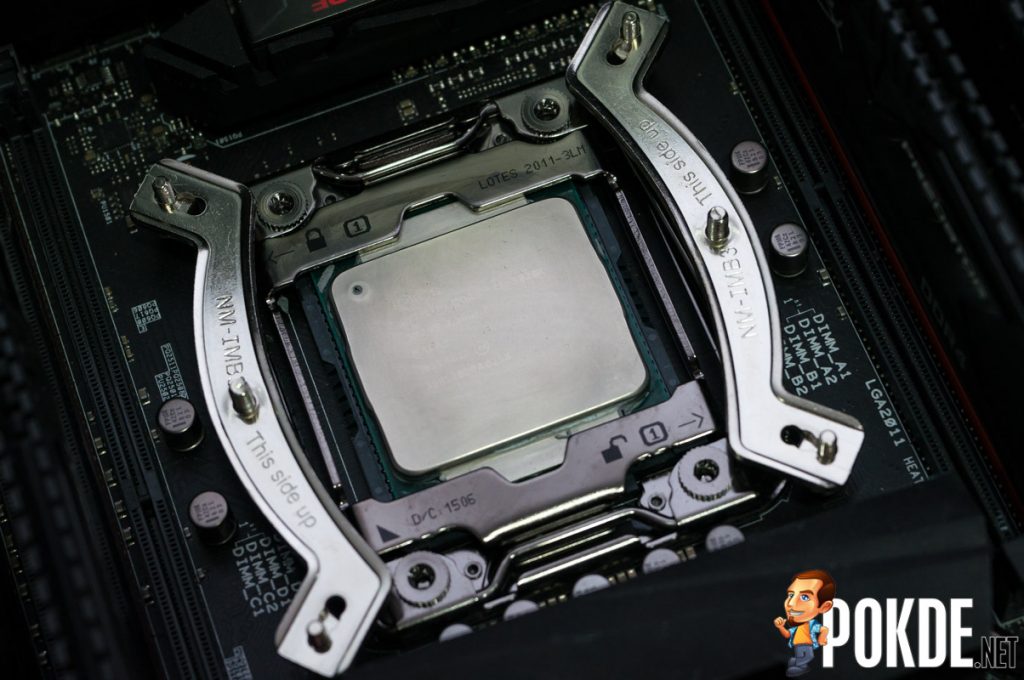 Noctua’s SecuFirm 2 mounting system is probably one of the most straightforward to install. And on the LGA2011v3 socket, it’s even more simple as you won’t have to fiddle with a backplate. Just mount the standoffs, and slip the bracket onto the standoffs. 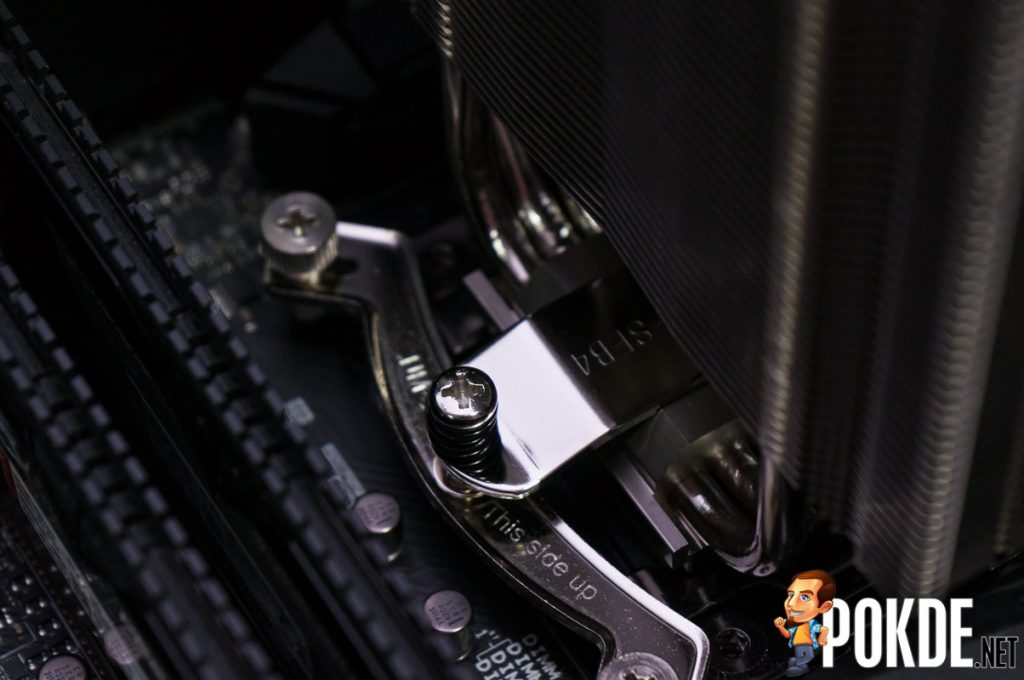 After securing the bracket, you will have to screw the cooler down with two screws. You will have to take the fans off the Noctua NH-U12A, as they sit right above the screws. With that said, once you are done screwing the two screws in, you can then put the fans back on. Remember how we said the cooler is slightly offset? 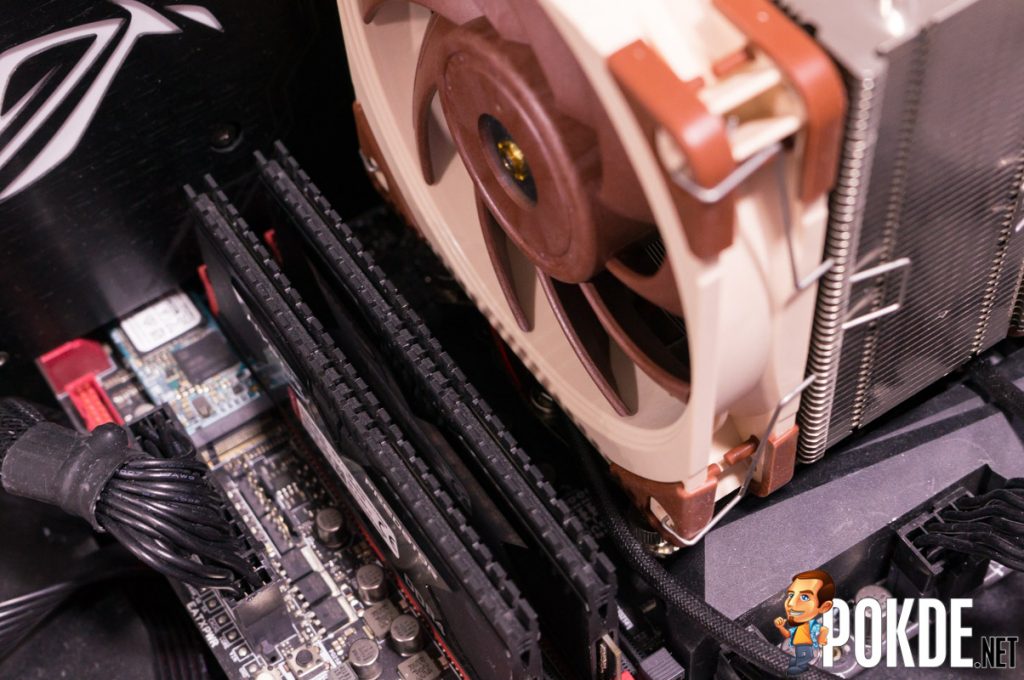 That design is perfect if you use an LGA115x or any of the supported AMD platforms, where the offset will make room for the DIMM slot closest to the socket. 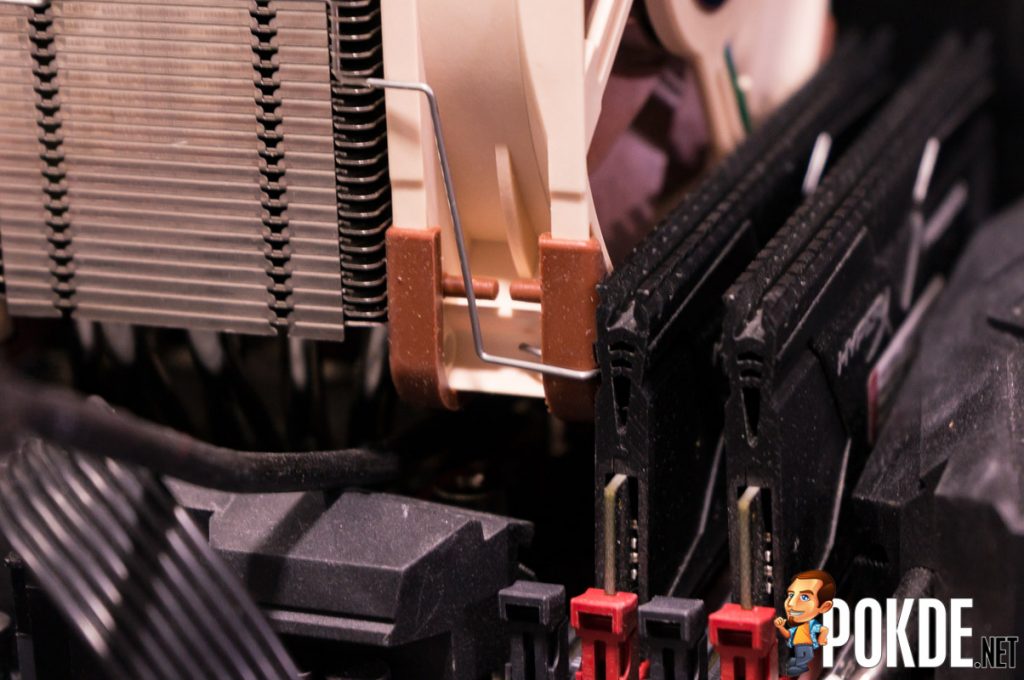 However on the X99 platform where we have RAM on both sides of the socket, the second fan on the Noctua NH-U12A does obstruct the first slot on the rear set of DIMM slots. There no clearance issues with the first PCIe slot to speak of, as this is a rather compact 125mm wide cooler after all. 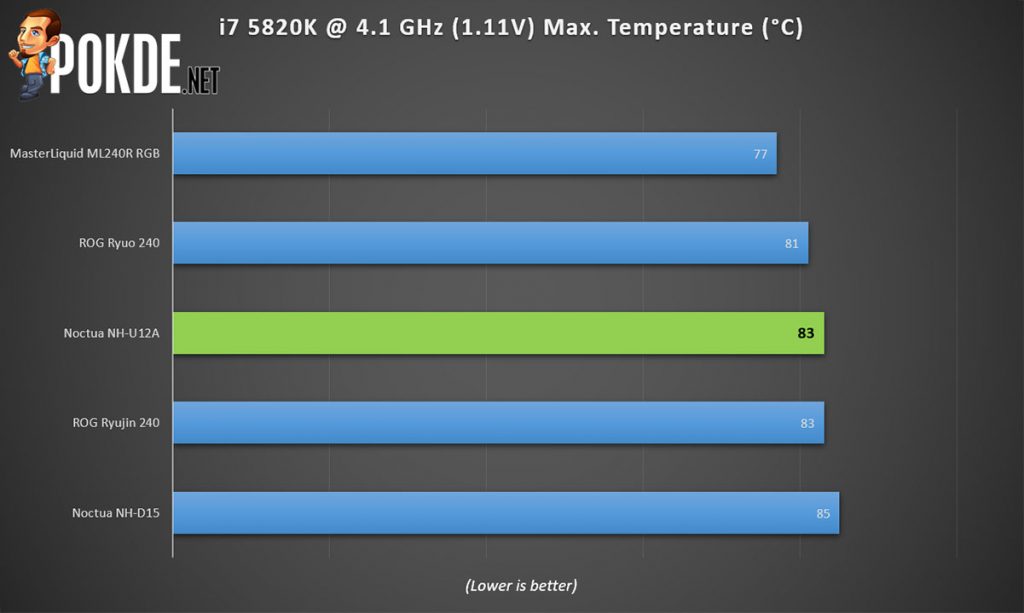 This is where it really gets interesting. The Noctua NH-U12A performs as well as some of the liquid AIO coolers we have tested. It really surprised us that Noctua managed to design a smaller, but better performing cooler, than the much more substantial Noctua NH-D15. 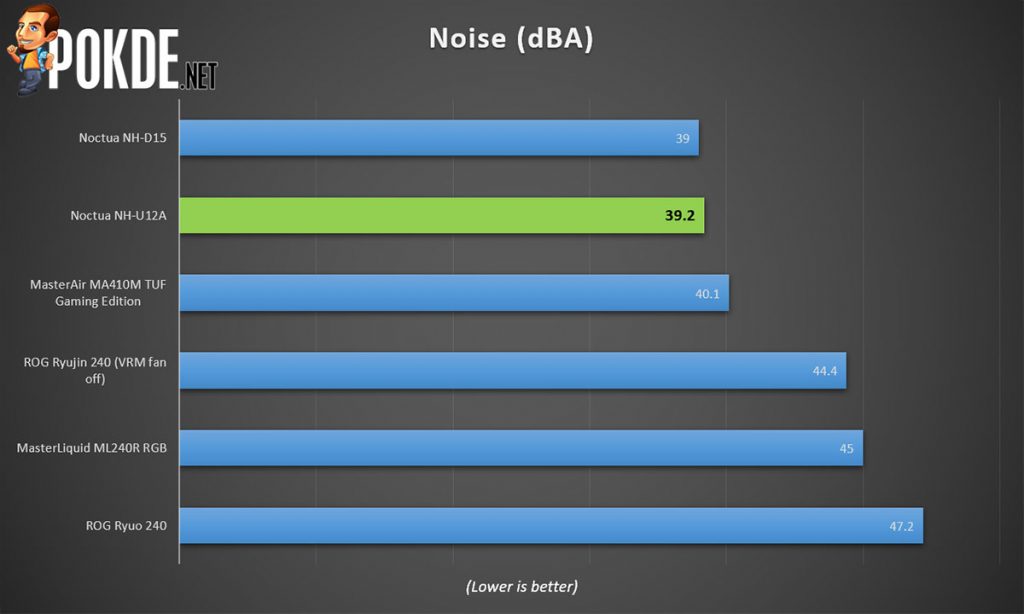 Even when it comes to noise levels, the Noctua NH-U12A is also ridiculous silent. It’s marginally noisier than the Noctua NH-D15, but I can’t hear the difference at all. If you are looking to build a really quiet rig, this should be one of your top choices.

The Noctua NH-U12A is not cheap, at $99.99 (~RM418.73). It is $10 more expensive than a Noctua NH-D15, but if we were to put a price on the ability to fit it on almost every motherboard while also getting better cooling performance, it would definitely be a lot more than just $10. How often do you see an air cooler that matches 240mm liquid coolers and yet run this quiet? And then there is the fact that you can forget about pumps failing and leaks… Some will definitely consider the peace of mind priceless. While we forsee users of the Noctua NH-D15 not seeing a point in upgrading to the Noctua NH-U12A, it does make for a great upgrade from the Noctua NH-U12S or Noctua NH-U14S, or basically any other 12cm and 14cm air coolers in the market.

Our thanks to Noctua for sending us the Noctua NH-U12A for review purposes. 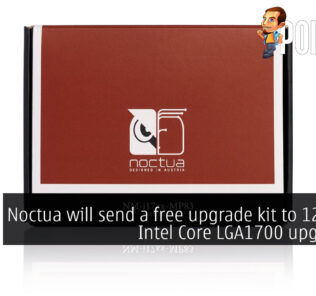 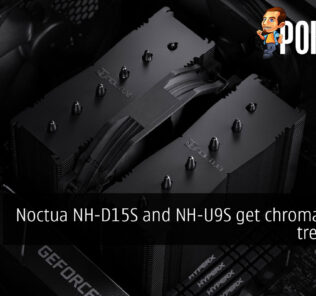 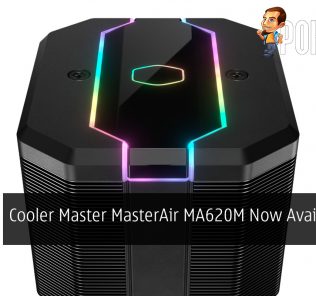