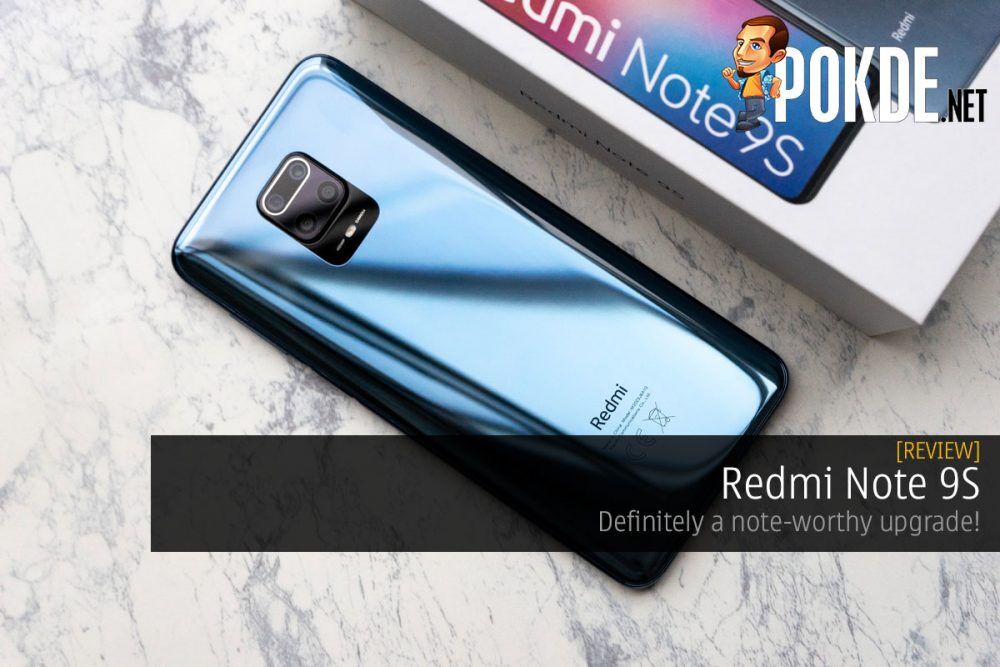 The Redmi Note 9S isn't exactly a direct replacement to the Redmi Note 8 Pro, but coming from the Redmi Note 8, the device offers a slew of upgrades across the board, including a larger display and a much faster chipset. But with so many devices vying for a piece of the pie in the RM799~RM899 bracket, does the Redmi Note 9S stand out? Well, to put it simply, it does.

If you don’t feel like reading the full review, you can also watch our video review of the Redmi Note 9S. 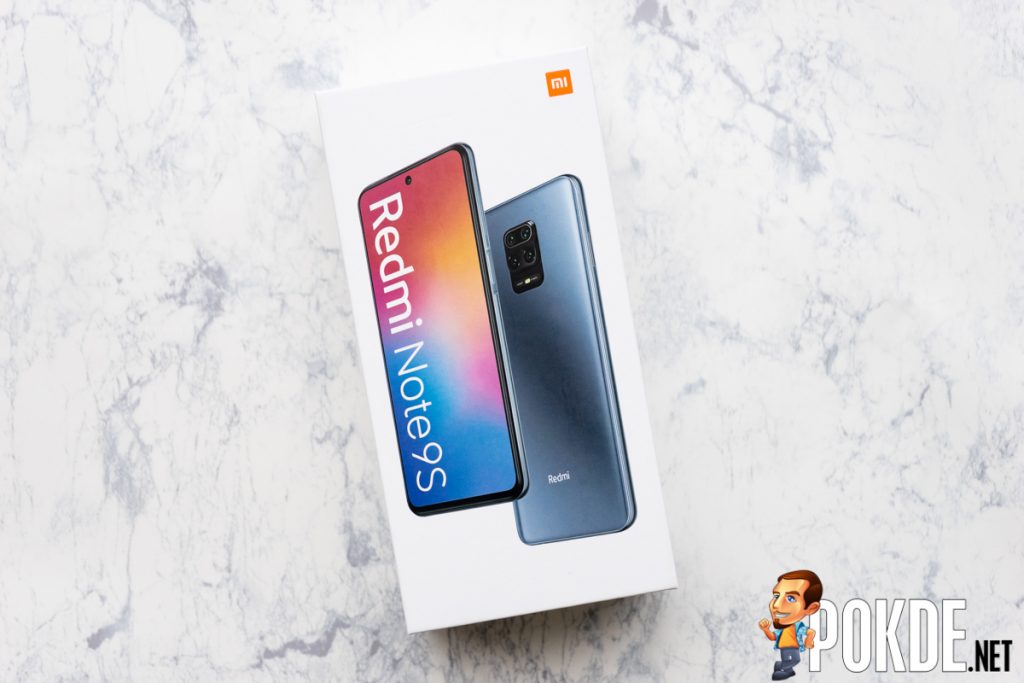 The Redmi Note 9S’ packaging isn’t the most interesting one, but it does its job. You get a full image of the device, although I am quite interested to know if the other color options will come with a different colored image, but since we received the Interstellar Grey variant, it matches. 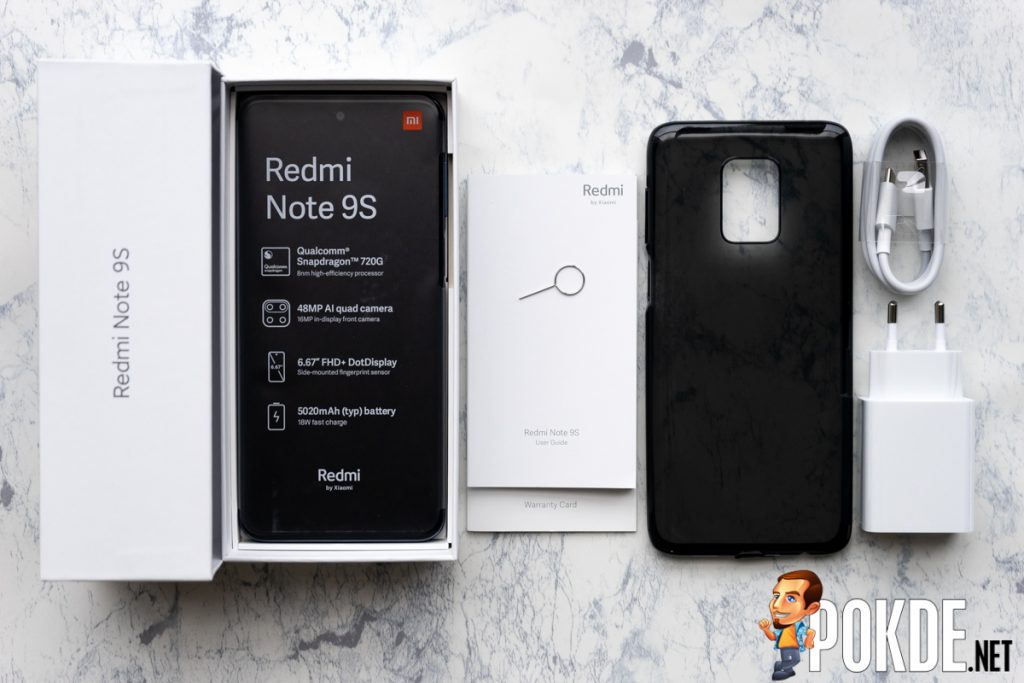 In the box are the usual suspects, you get a blacked out TPU case, the SIM ejector tool and also the usual documentation. I appreciate that Redmi is actually giving us 18W fast charging in the Redmi Note 9S, and instead of just giving us an 18W charger, there’s actually a 22.5W fast charger in the box. For whatever reason. 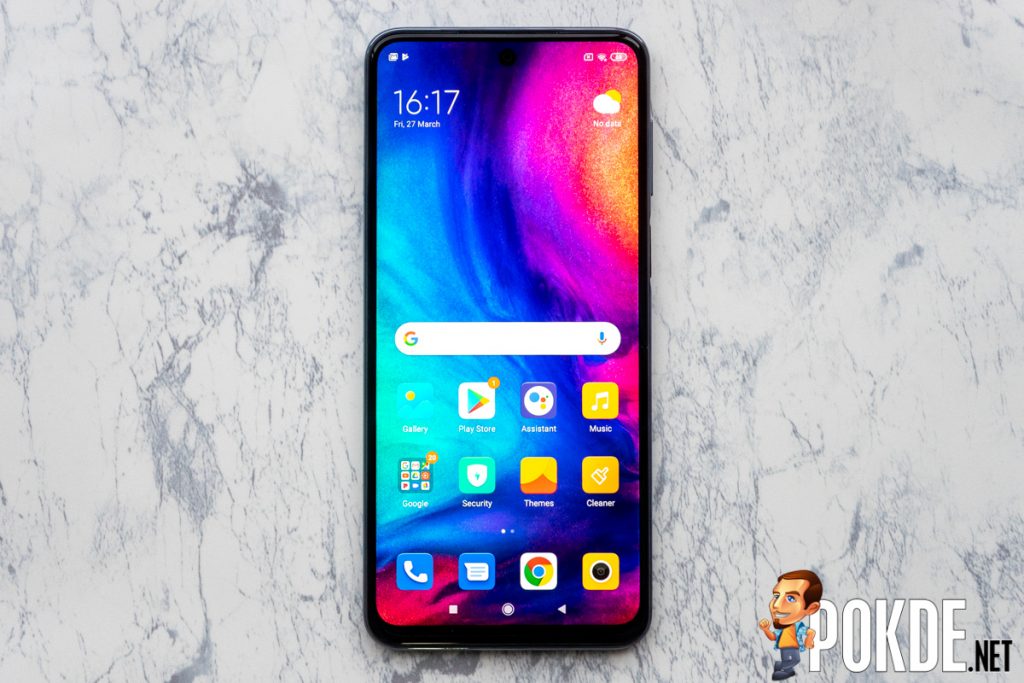 The main improvement up front coming from the Redmi Note 8 is the new punch hole display here on the Redmi Note 9S, instead of the notch found in the older device. I did fancy the Redmi branding in the bottom chin of the Redmi Note 8 though, but that didn’t make the cut here. It might have been for a cleaner look though, as Redmi dropped the colored accents around the screen too. 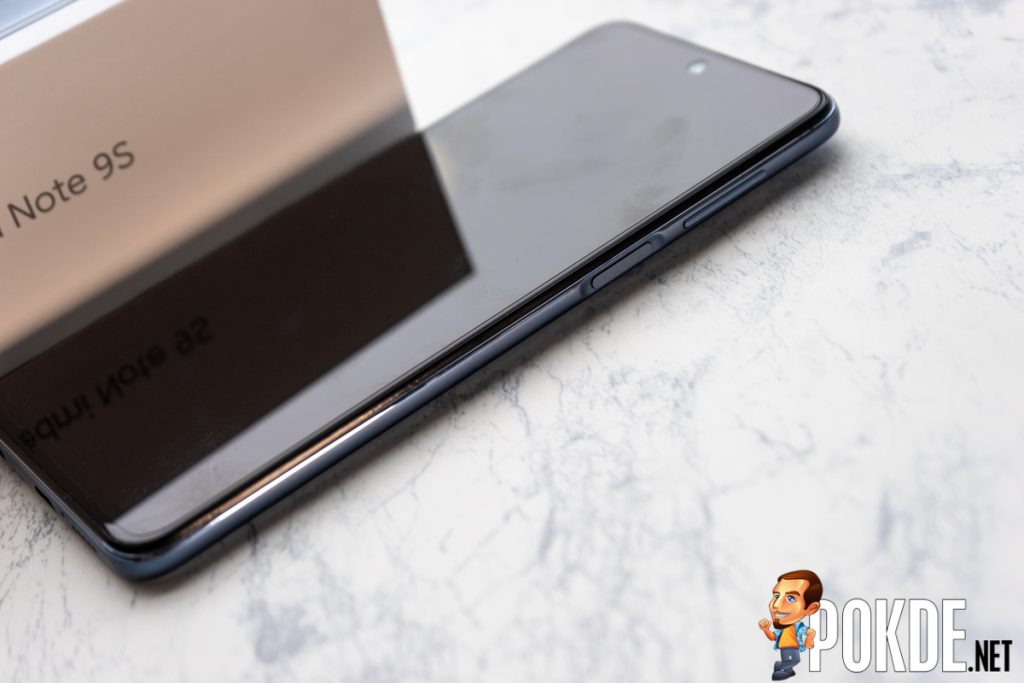 Redmi went with a plastic frame again, but thankfully they had the sense to use a matte finish here. It feels absolutely solid though, so I have zero complaints here. The fingerprint scanner is also moved here, integrated into the power button. This seems like a trend for any non-OLED smartphone recently, but I am not complaining. 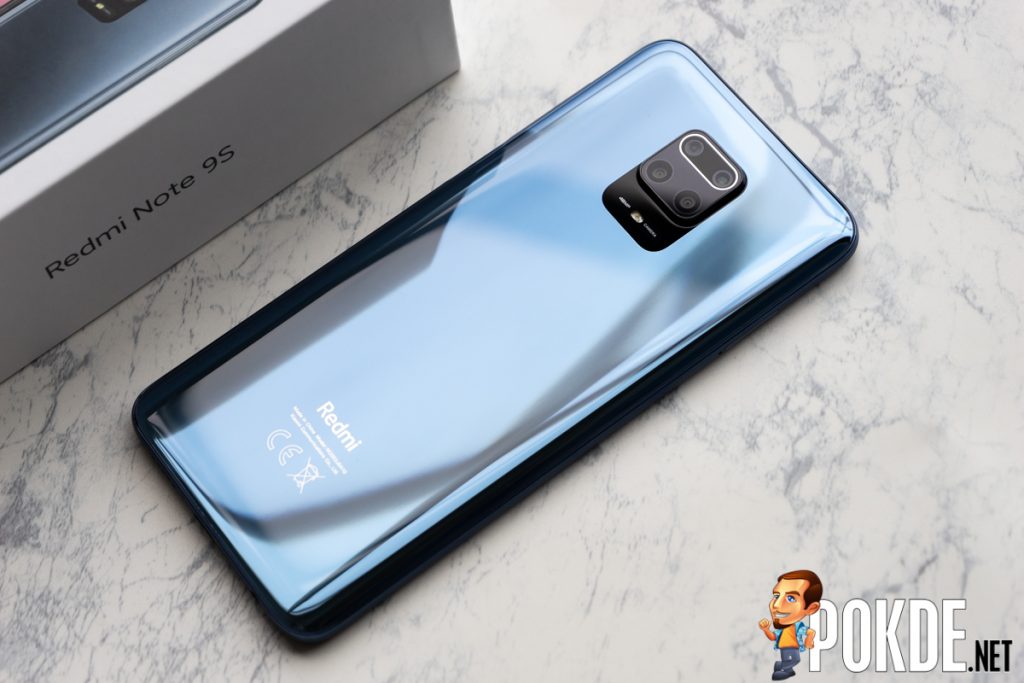 The Interstellar Grey variant’s back is actually a bit bluer than I expected. It’s a very light shade of grey with a hint of blue and a surprising amount of depth to the mirror-like finish. I really like it as it looks good without going for cheap gimmicky motifs, but instead went with a process that Redmi claims to be a micron-level texture design with a 20-step process. I am a fan of the finish, so I guess the effort paid off? The Redmi Note 9S’ back is made of Gorilla Glass 5, to give it more scratch resistance than its peers with plastic backs. On top of that, the quad-camera is now positioned in the center of the device, so that should avoid the wobbling issues that most smartphones today face. 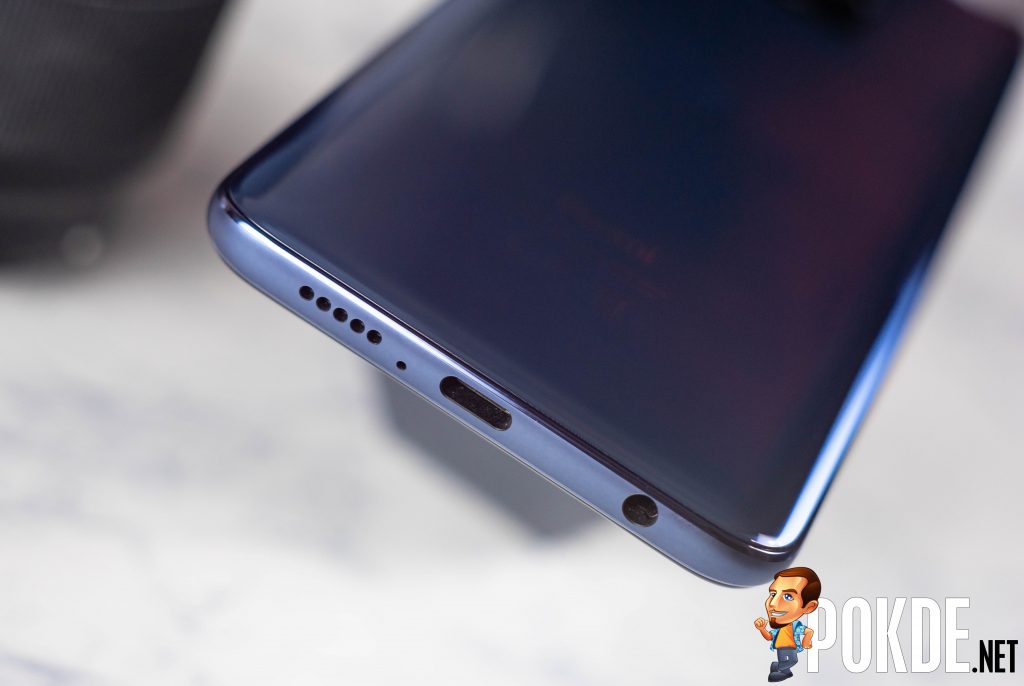 The bottom edge is home to the headphone jack and USB-C port. You can also spot that slight beveled edge that’s glossy just to give the Redmi Note 9S a few extra style points. 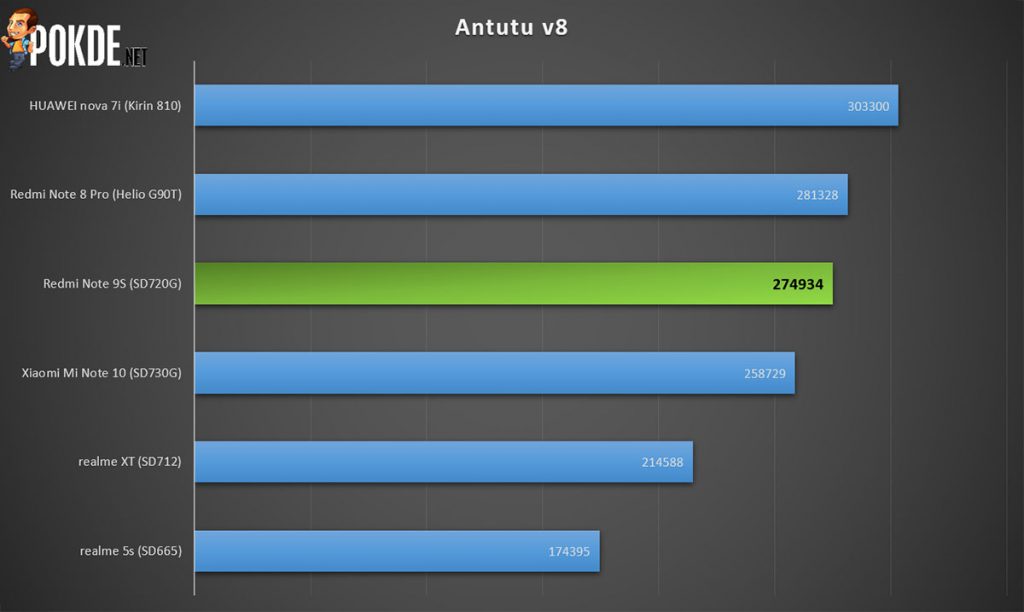 In Antutu, we see exactly that. The Redmi Note 9S comes up on top of the Mi Note 10, although it doesn’t exactly deliver enough grunt to defeat the Redmi Note 8 Pro. 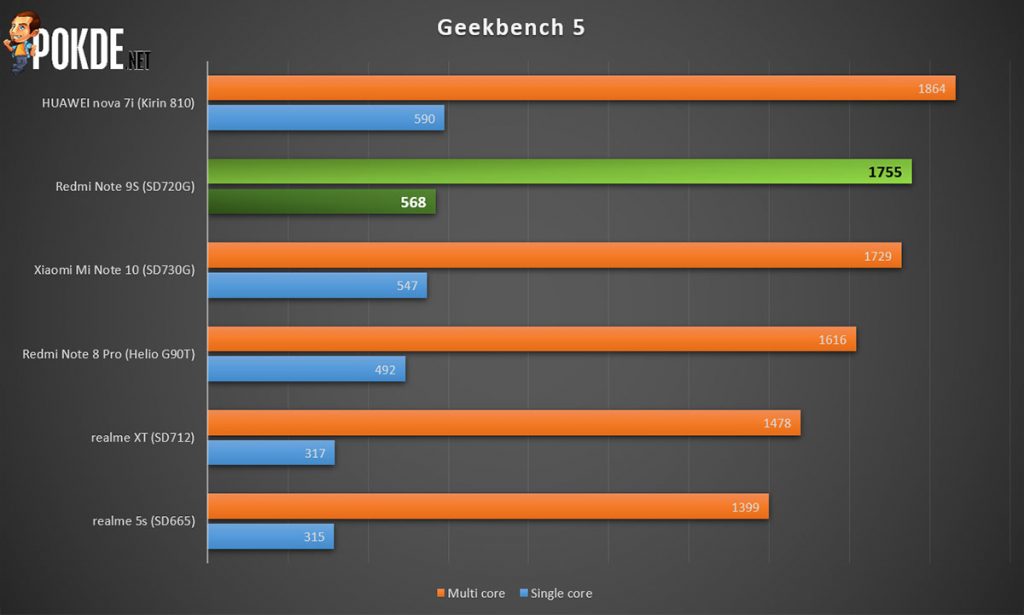 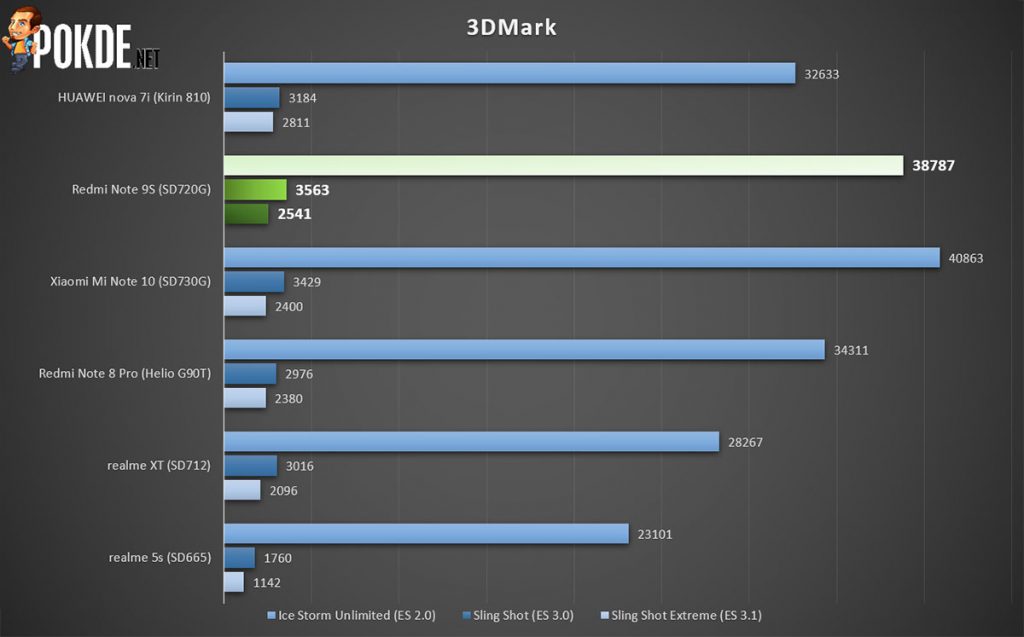 It also packs more GPU horsepower, although both the Snapdragon 730G and Snapdragon 720G come with Adreno 618 GPUs. The specifications for the Redmi Note 9S lists the Adreno 618 with a 750 MHz clock speed while the Mi Note 10 lists a 700 MHz clock speed for its GPU. So maybe that 50 MHz difference along with the difference in CPU performance gives it the advantage we see here. 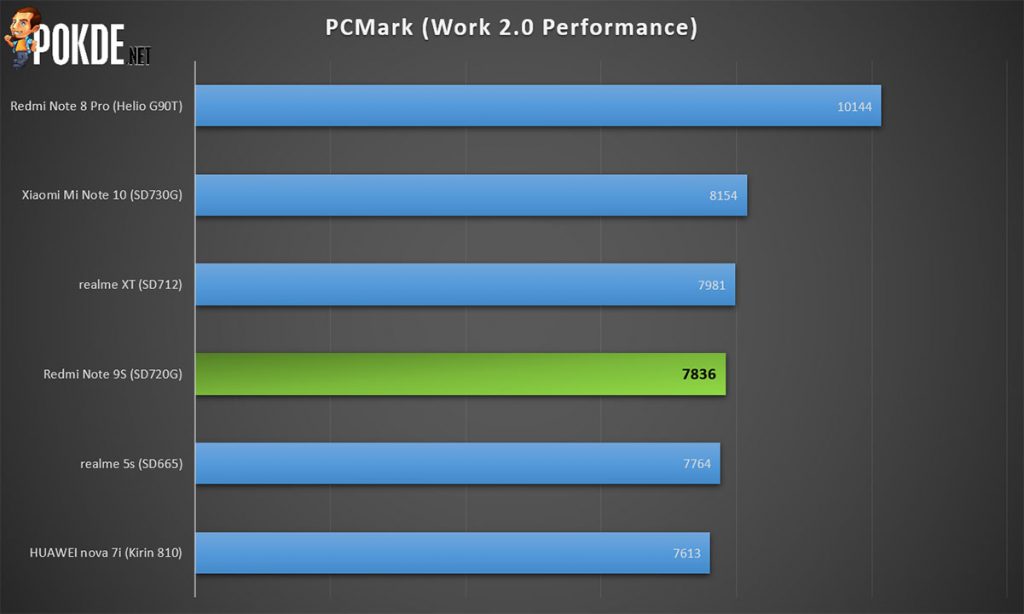 No such advantage is evident in PCMark though, probably because the Redmi Note 9S has 1/3 the RAM in the Mi Note 10. PCMark does put great value on RAM, so the lesser RAM will definitely result in poorer scores. 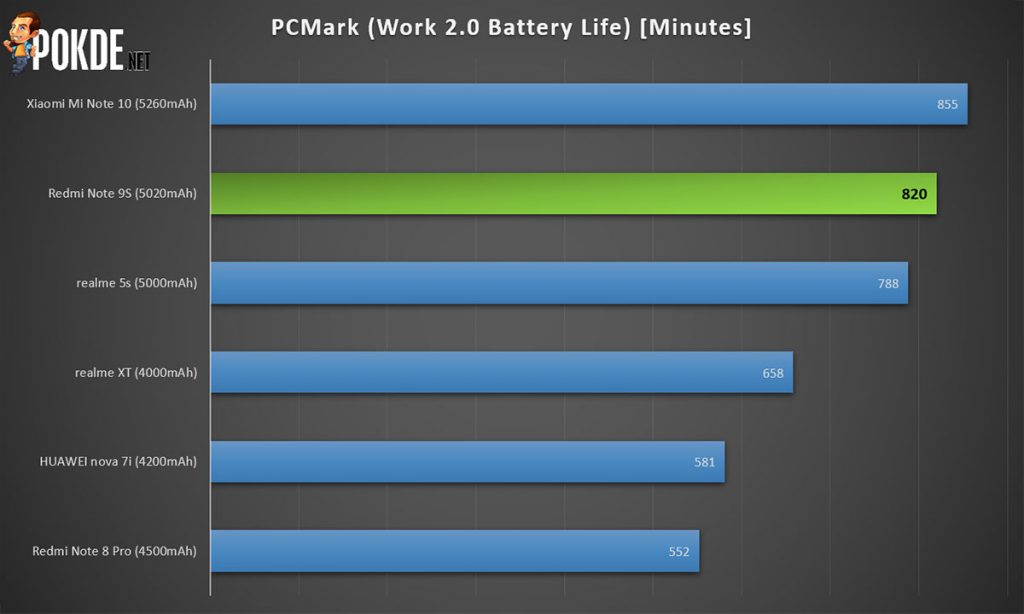 Aside from performance, the Redmi Note 9S also delivers awesome battery life figures. It’s worth noting that the Redmi Note 9S packs the largest battery for any Snapdragon 720G smartphone launched to date, so it should hold on to its lofty position for quite some time in the mid-range segment. The Mi Note 10’s slightly larger battery, lower clocked CPU and GPU cores as well as the AMOLED display may have helped it gain the lead here. 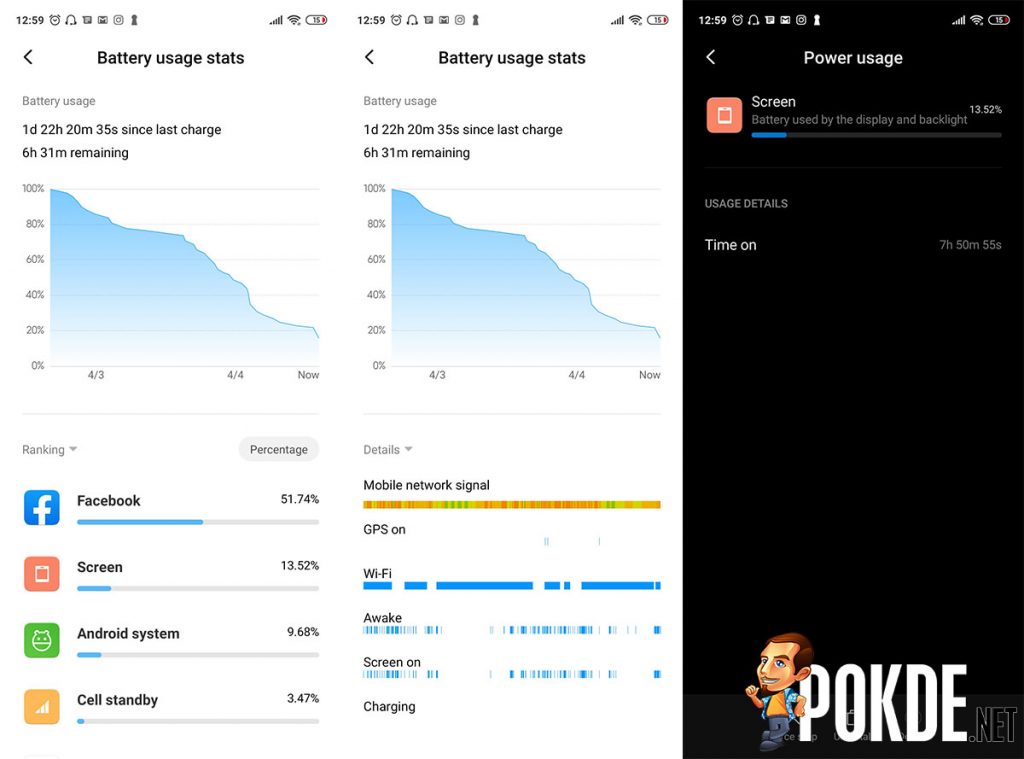 I managed to clock nearly 8 hours of screen-on time from 100% to 15%, which is absolutely amazing. It seems like the Snapdragon 720G is really quite efficient, although it is worth noting that because of the RMO, I was using WiFi most of the time. And due to the humongous battery here, even 18W fast charging isn’t exactly fast enough. It regained a mere 32% in 30 minutes, but then again 32% should still be enough to last you through at least half a working day.

Now, gaming performance. A lot of people in the community really like to comment on the gaming performance in the mid-range segment, because honestly, there’s not a single game that can make a flagship sweat today. The Redmi Note 9S is capped to 40 fps in PUBG Mobile but you can easily get 60 fps in COD Mobile even at the High graphics setting, which is excellent.

Let’s start off by agreeing that Redmi is playing it relatively safe with the Redmi Note 9S. There are no fancy over-the-top designs here. Performance wise, they just took the latest mid-range chipset from Qualcomm and packed it into the Redmi Note 9S. There’s also no 90 Hz display that some of the competition is boasting about, but I will elaborate more on that later. 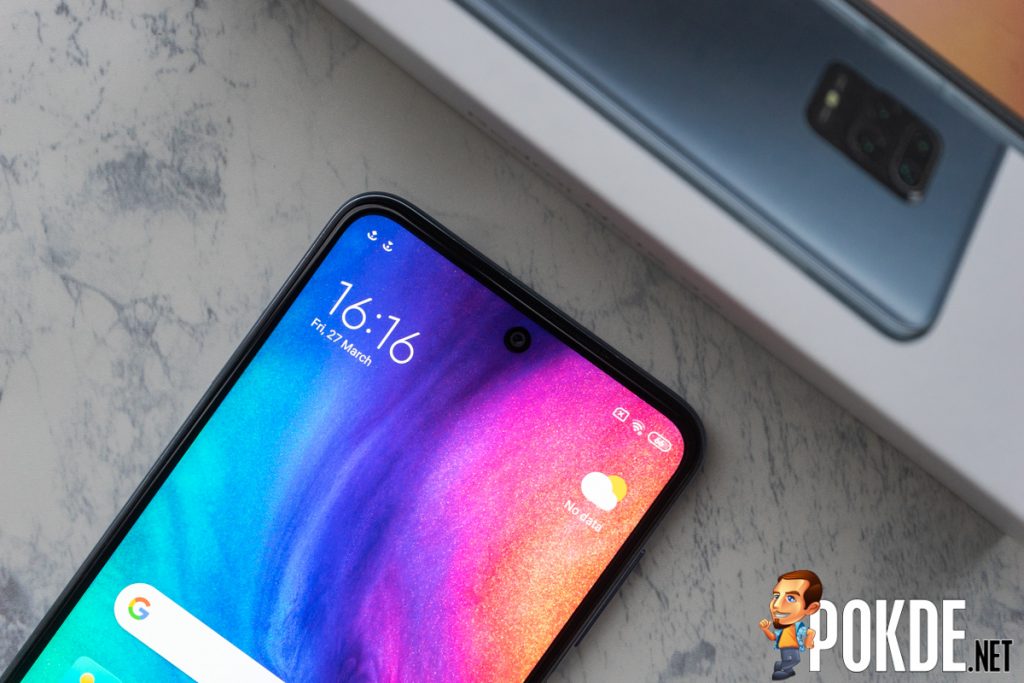 While it lacks the fancy features that I mentioned earlier, the display on the Redmi Note 9S is just beautiful. Colors are plenty vivid, and the punch hole is actually quite close to the edge, giving you more screen area that’s usable. And while the 6.67″ size might seem daunting, the slim bezels make the Redmi Note 9S relatively manageable even in one-handed use. I noted some backlight bleed along the edges of my review unit though, and surprisingly it is visible along the edges of the entire screen, but it is relatively mild.

Now, let’s address the 90 Hz refresh rate. There’s no point talking about 90 Hz when most mid-range chipsets won’t actually support 90 Hz in the popular games. Nor is there a point when the manufacturer pushing for 90 Hz displays in the mid-range segment is actually limiting what apps can actually make use of the 90 Hz screen via software. When gaming, the mid-range 90 Hz displays are also capped to 60 Hz, so the playing field is somewhat leveled. It isn’t really though, as the Redmi Note 9S has a massive display that’s larger than its peers and that helps when it comes to gaming. The upside is that the Redmi Note 9S has a screen that’s really long, rather than wide, so it isn’t that unwieldy in the landscape orientation. In fact I enjoyed gaming on the Redmi Note 9S more than I did on the POCOPHONE F1, and that’s really saying something as I have relied on the latter for my mobile gaming fix ever since I got one. 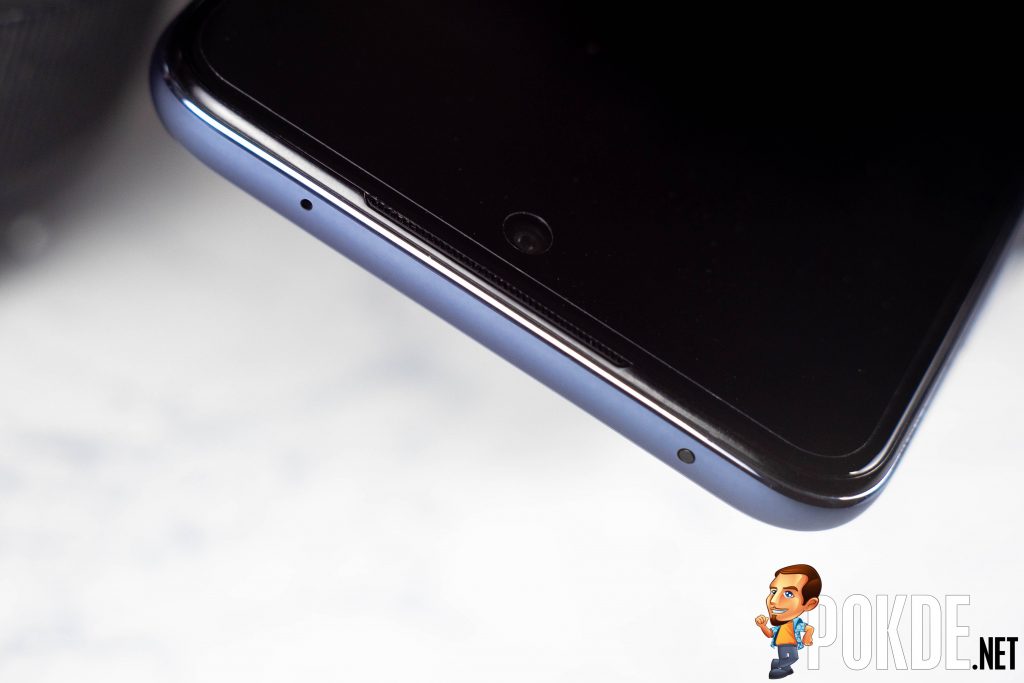 Moving on, the audio of the Redmi Note 9S is actually pretty good, albeit it is only mono, coming from the lone loudspeaker on the bottom of the Redmi Note 9S. There’s the headphone jack if you want better sound, which is something which Redmi has thankfully not forgotten about. If you have bigger things to pump out your tunes, there’s also the IR blaster on the Redmi Note 9S to control your speakers or TV. For me, I just use it to control the air conditioners here in my living space.

On the software front, the Redmi Note 9S runs MIUI 11. It has been on a number of prior Xiaomi and Redmi releases, so nothing too surprising here. Unlike the Redmi Note 8 Pro however, the Redmi Note 9S comes straight out of the box with Android 10, which is probably what you would expect from a device launched in 2020 anyway. All the important stuff are present here, including a Google feed on the leftmost page of the launcher. Interestingly, nearly the full suite of Google apps are preloaded on the Redmi Note 9S, including Google Pay, despite the feature not being supported by local banks here in Malaysia.

Unfortunately the 4GB RAM doesn’t seem sufficient to keep everything running smoothly. The launcher gets killed in the background quite often, and switching between apps reveal a hiccup or two. The 6GB RAM variant should fare better for those who multi-task a lot, but if you can live with the minor stutters, the 4GB RAM variant will suffice.

We see more familiarity in the camera app, which honestly hasn’t changed much over the years. The unfortunate thing is that as these smartphones get more and more camera features, the features are now all over the place. For example, the macro mode is hidden in the hamburger menu along the top of the phone, while the Pro mode is like two taps away to the left along the list of modes below the viewfinder. I still have to hand it to Xiaomi when it comes to a proper Pro mode though, complete with peaking for proper manual focusing without the guesswork.

Results taken with the camera are decent enough for a mid-range device, although I must say the Redmi Note 8 Pro still has the upper hand here. In good lighting, there’s a touch of softness to the images from both the main camera and ultra-wide shooter. Low-light images are a lot worse than I would expect from a device this recent, and unfortunately the ultra-wide angle camera doesn’t even support the Night mode to help things along. The main 48MP camera does a better job once Night mode is enabled, although it is still a lot splotchier than some of its peers. Meanwhile when shooting 48MP shots, the camera adopts a very cool white balance for some reason, and this is apparent in both day and night shots.

The macro camera is worthy of praise, although not entirely because of its image quality. Under good lighting, you can get some nice close up shots with a decent amount of detail, but when the lighting dips down a bit, noise takes over. The Redmi Note 9S’s macro camera that sports autofocus, which is not something you often find even among flagship devices, and that definitely helps when trying to obtain those sweet, sharp close ups. Not having to guess whether you are exactly 4cm away from your subject definitely helps in all scenarios, so kudos to Redmi for that. You can check out the full-sized images here.

For RM799, the Redmi Note 9S does offer excellent value for your money. For the same price as the Redmi Note 8 was launched, you get faster charging, a much bigger battery, a bigger screen, and a much more powerful chipset along with all that. It’s an excellent buy for anyone looking for a solid mid-range device, and there’s enough performance under the hood for you to scratch your gaming itch, and enough battery life to make sure that you don’t have to run to the charger half way though a COD Mobile match.

And while there were some hiccups along the way (the gaming experience was not affected, BTW), it’s worth noting that this is the 4GB variant and the additional 2GB of memory available in the 6GB version of the Redmi Note 9S should solve those issues. And the upgrade will only cost you an extra RM100 for 50% more RAM and 100% more storage… I think you should just plump up the extra and get the higher end one for just RM899.

Our thanks to Xiaomi Malaysia for sending us the Redmi Note 9S for review.

PokdePicks:OPPO A74 Review — Getting The Essentials Plus A Bit More
2 Comments
Leave a response