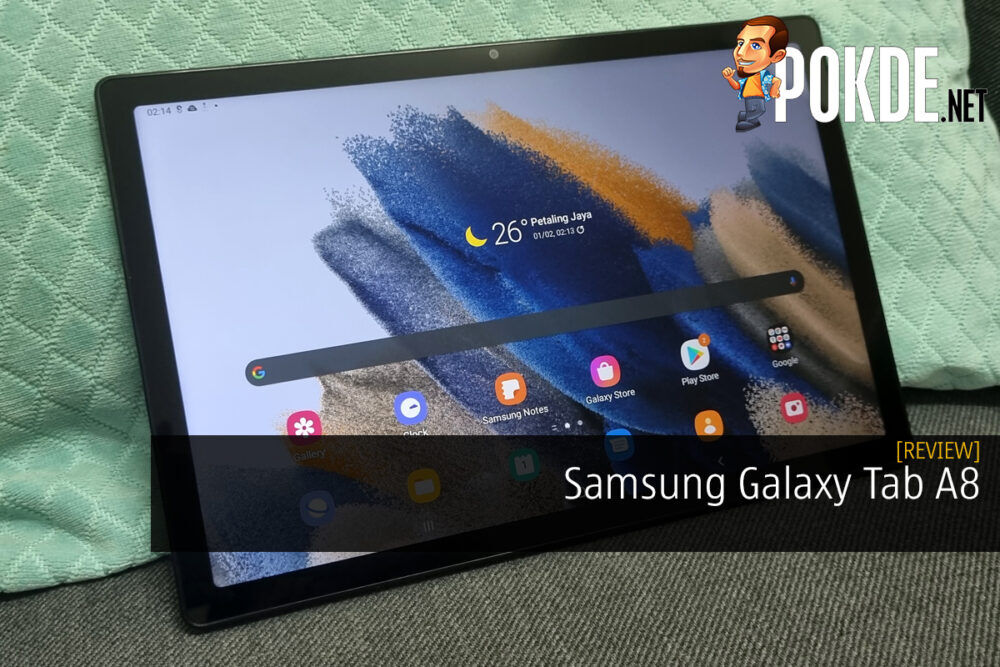 The Samsung Galaxy Tab A8 is a 10-inch Android tablet with an emphasis on multimedia use. Is it worth your money? Let's find out.

At RM999, the Samsung Galaxy Tab A8 is certainly a tablet that focuses on value. It's not a high end performer but it should be more than adequate for productivity, web surfing, and multimedia entertainment.

Unboxing the Samsung Galaxy Tab A8 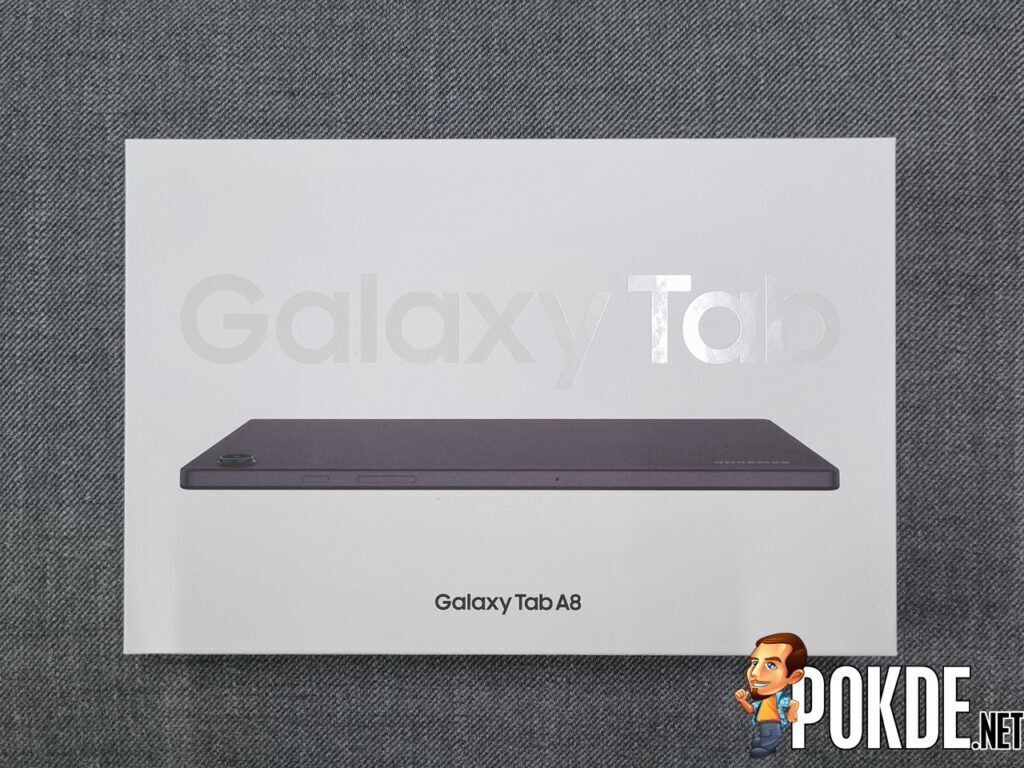 Let’s kick off the Samsung Galaxy Tab A8 review with the unboxing. The box is pretty much standard issue as far as packaging design is concerned for their tablets, clad in white. Inside the box, you will find the following items: 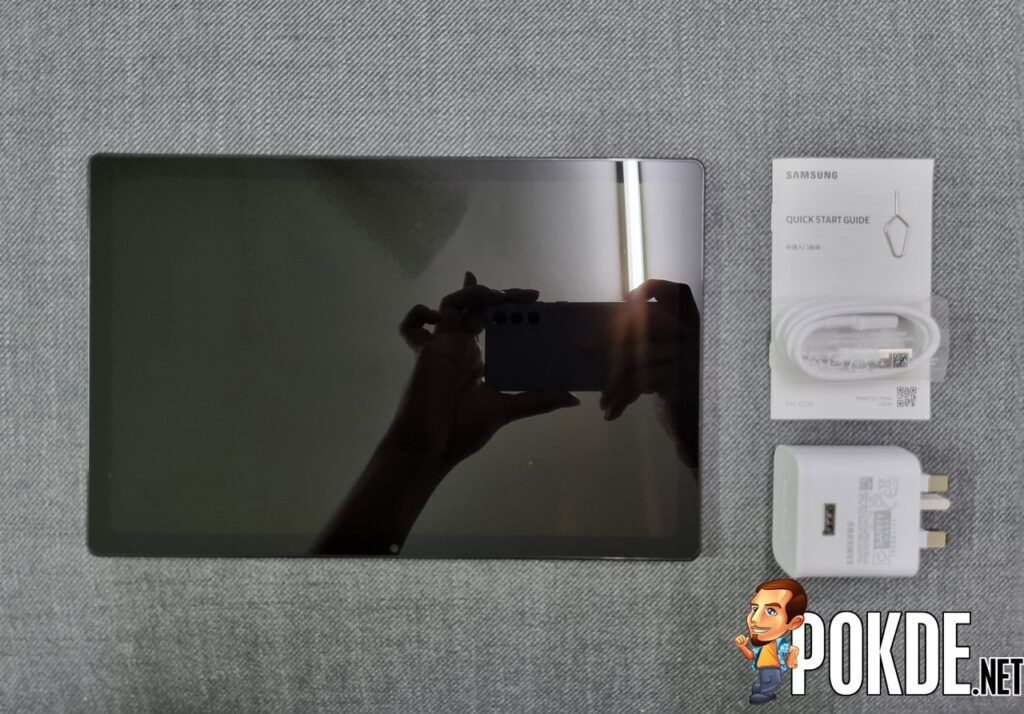 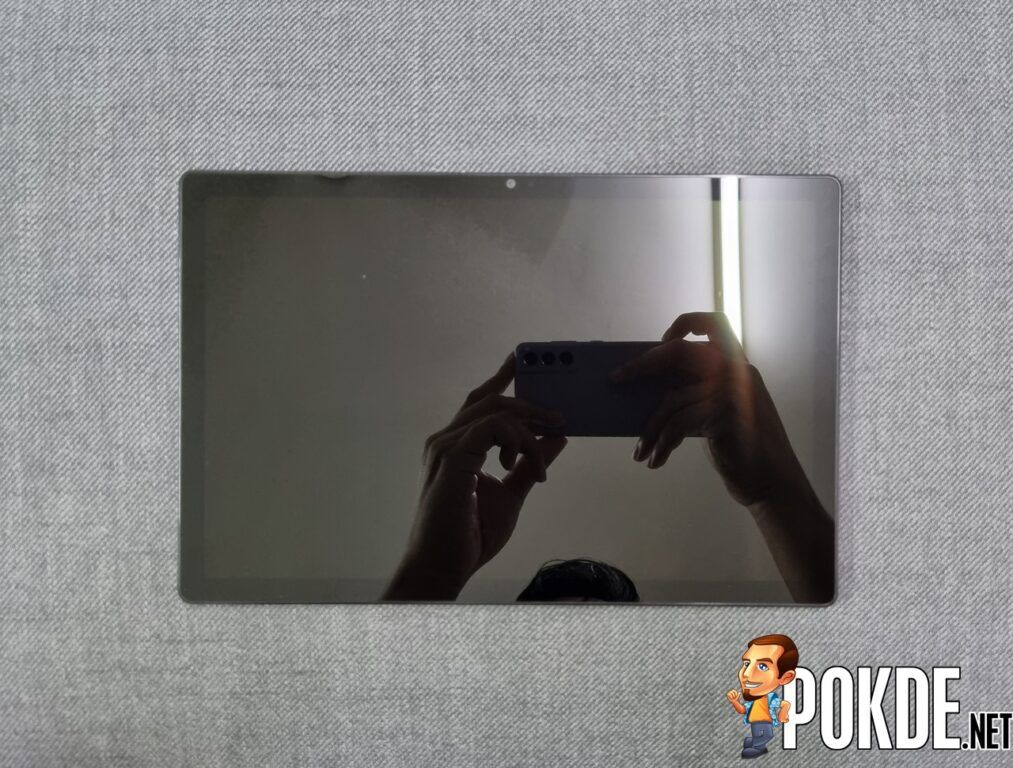 The Samsung Galaxy Tab A8 is a tablet with a 10.5-inch TFT display and a 16:10 aspect ratio, which is essentially your standard widescreen display with a little bit of extra vertical real estate. The bezels are quite noticeable, with the right bezel (top bezel if you’re holding it sideways) housing the front-facing camera. 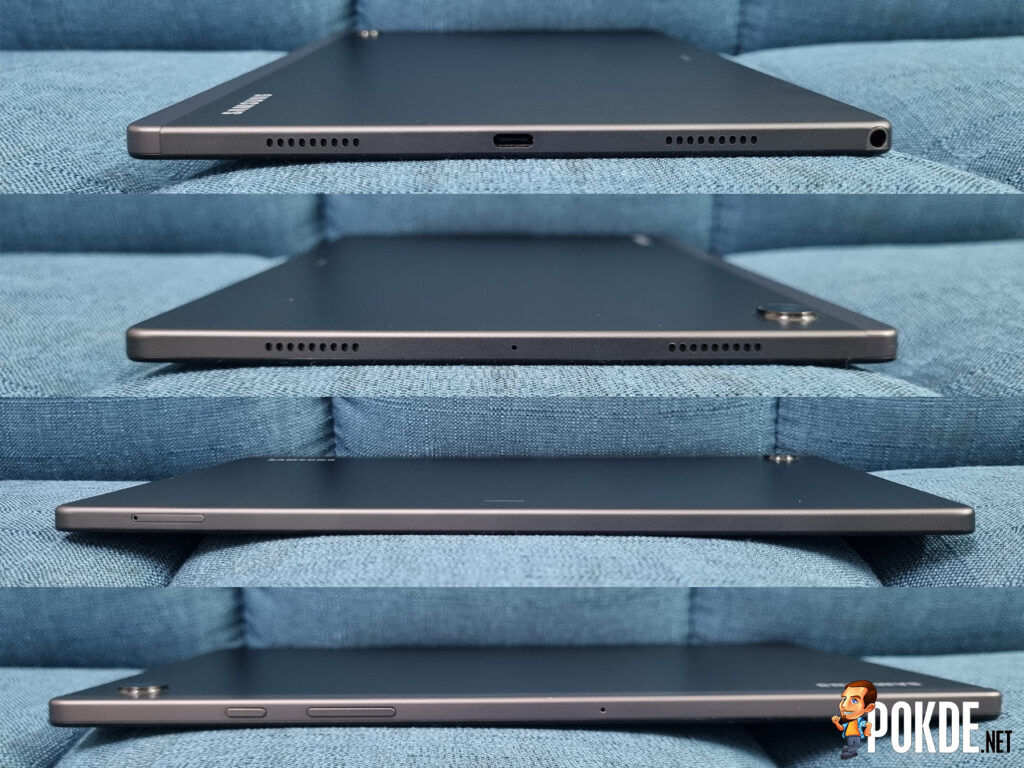 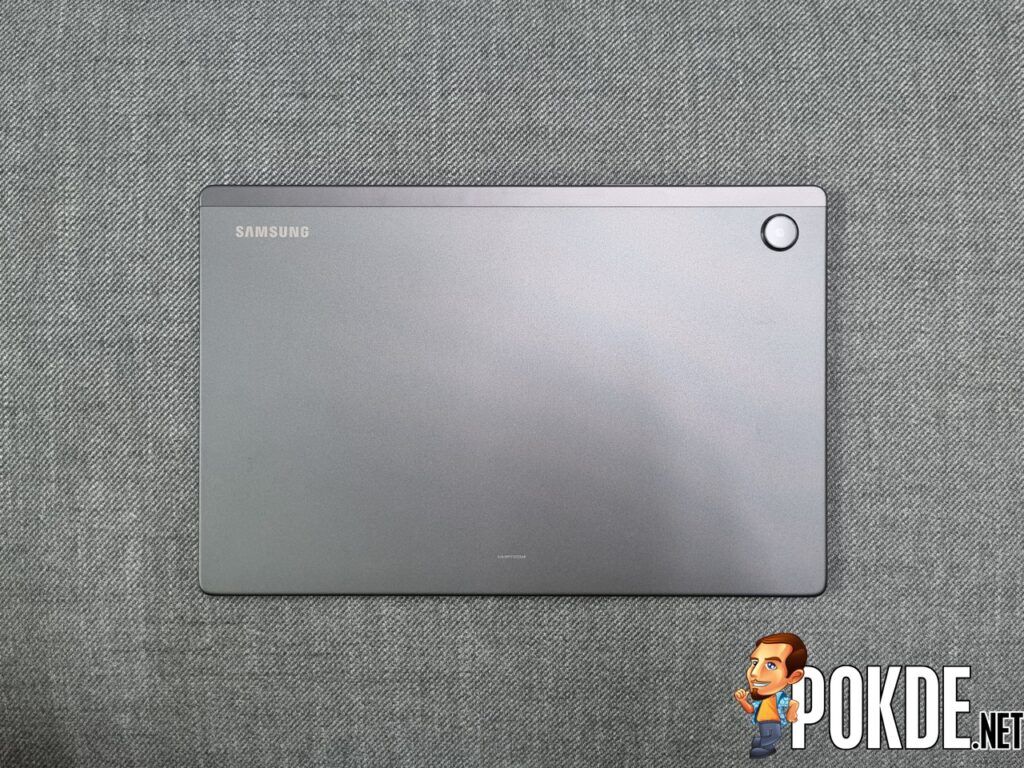 Moving over to the back, you get a good view of the tablet’s metal body with a matte finish You have the Samsung logo in the top-left corner with the single camera setup on the top-right corner. It’s worth noting that the camera protrudes quite a bit.

Overall, the Samsung Galaxy Tab A8 has their signature tablet design with a solid build quality, which is great given the price point. Despite the matte finish, the rear somewhat gets fingerprint smudges easily but since most people would use this with a protective case, it’s not a problem. 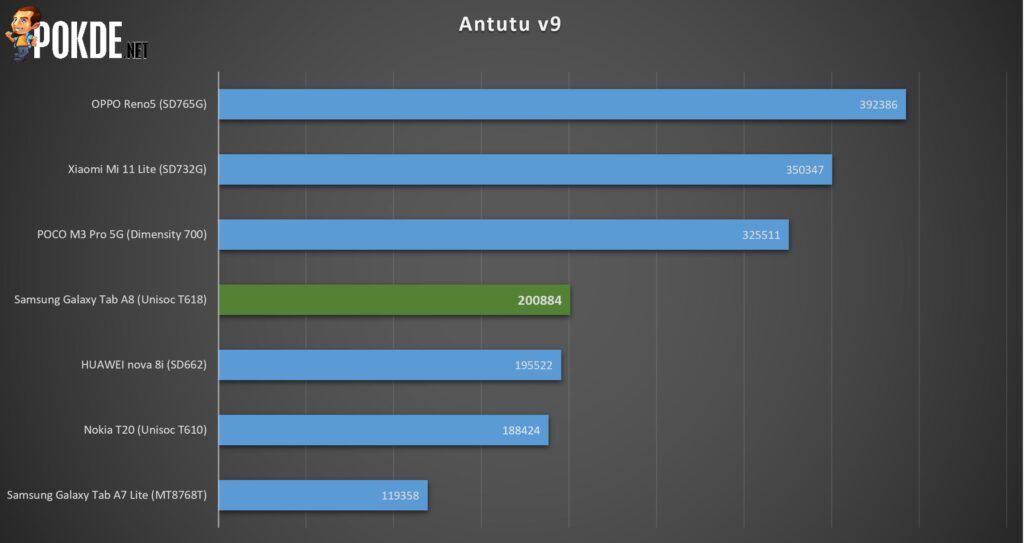 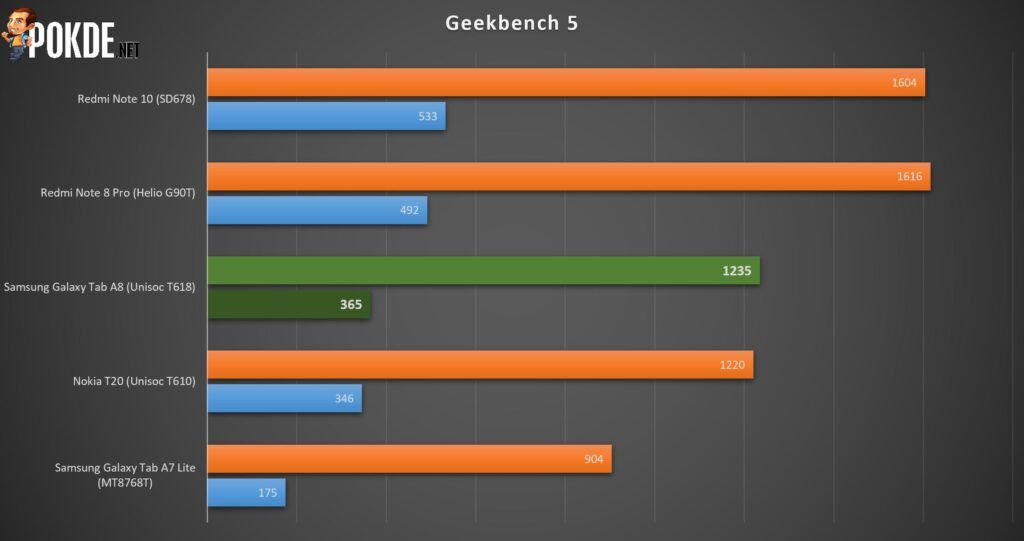 A similar pattern can be seen in Geekbench 5, as the Samsung Galaxy Tab A8 outperformed the same tablets from before. Unsurprisingly, a midrange device / SoC can easily outperform it but keep in mind that this isn’t meant to match that. 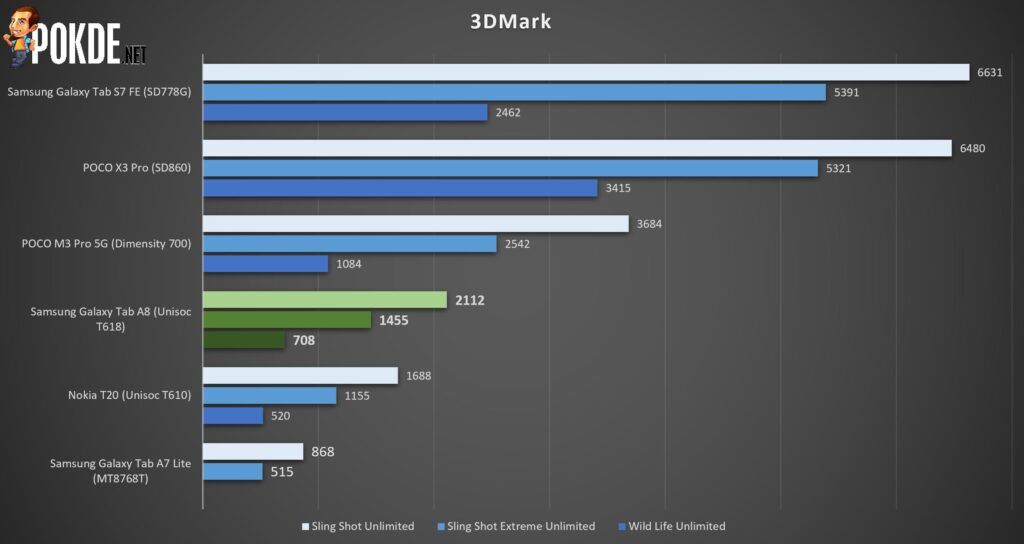 Moving on to 3DMark, we managed to get the Wild Life benchmark to run on it, something that wasn’t possible on the Galaxy Tab A7 Lite. It’s not a strong showing but it is capable of 3D graphics just fine. One way of looking at it is that you can run multimedia and game apps on it, as long as it’s not too resource-intensive, like Genshin Impact for example. 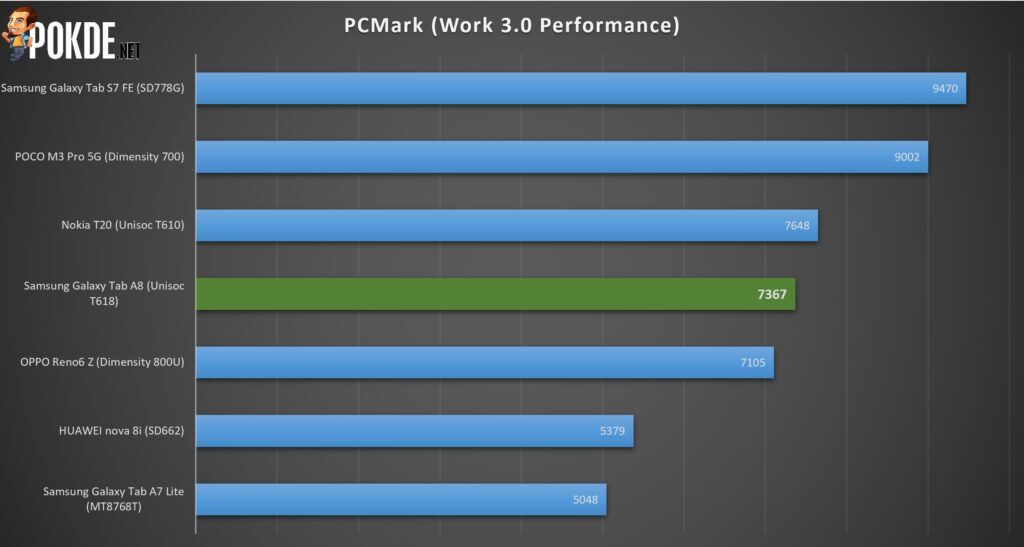 Moving on to PCMark Work 3.0, the Samsung Galaxy Tab A8 performed pretty well for what it offers. Interestingly, it falls behind the Unisoc T610 SoC but generally, it shows a good potential for productivity use. 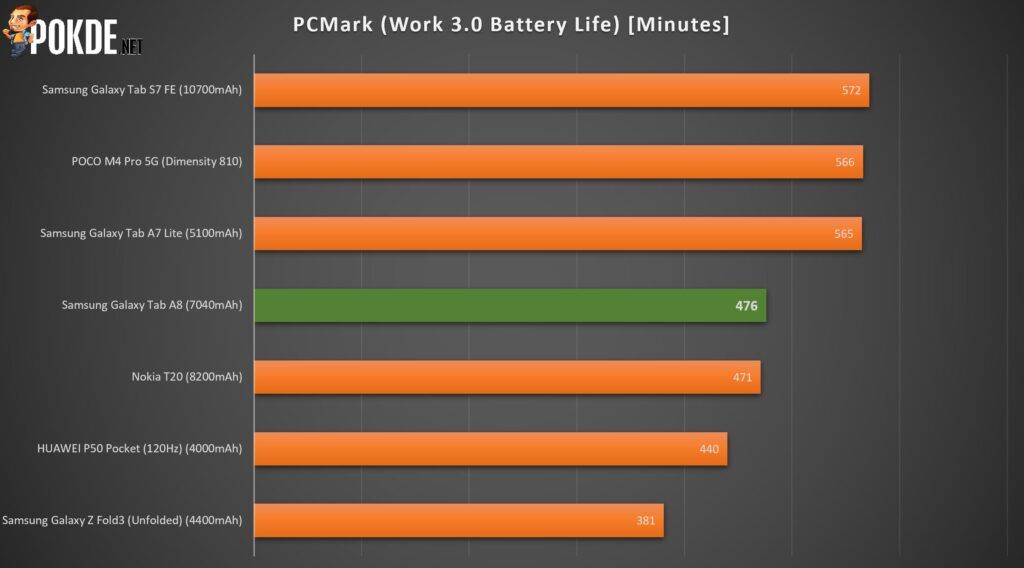 For battery life, the Samsung Galaxy Tab A8 managed to last 7 hours and 56 minutes (476 minutes) in the PCMark Work 3.0 endurance test before the battery depleted. You can’t really compare it to smartphones given that the screen is much bigger. From my experience, it can go down quite a bit when in use but the standby time is excellent as it took me over a week before I needed to charge it. 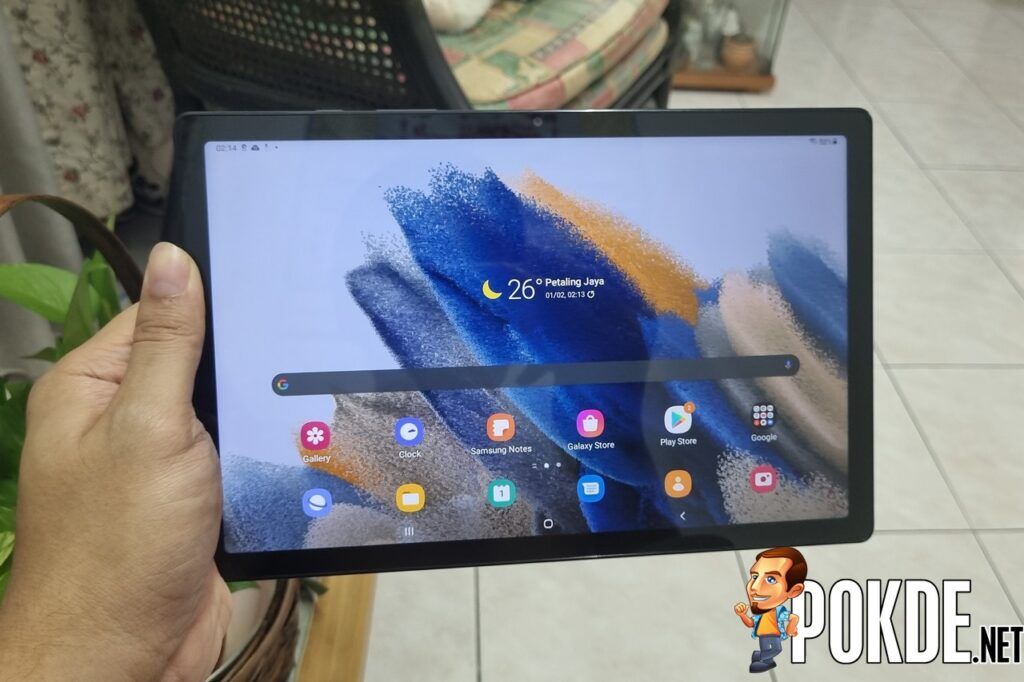 The Samsung Galaxy Tab A8 uses a 10.5-inch TFT display. Given its 1920 x 1200 resolution, it has an aspect ratio of 16:10, which is essentially the same as the 16:9 widescreen aspect ratio, but with a little bit of extra vertical space. The resolution puts it at about Full HD+, which is excellent as it lets you enjoy mainstream high definition content without limitations.

It’s worth noting that the display is reflective, and while it can get bright, it can be a bit hard to look under bright sunlight. With that being said, colours are generally pleasing to the eyes so I’m sure most people would be able to enjoy it just fine. If you need a higher quality display on a tablet, you may want to opt for the flagship S-series tablets instead. 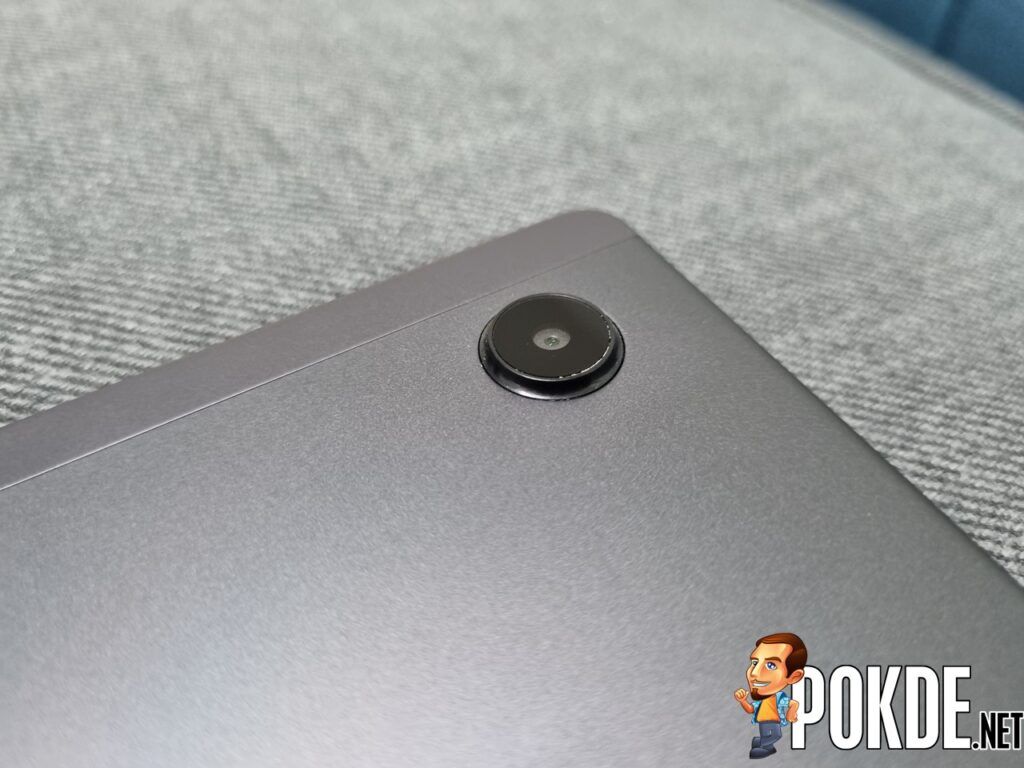 The Samsung Galaxy Tab A8 is powered by the Unisoc T618, which is an entry-level SoC that is positioned a little higher than the Unisoc T610. For our review unit, it has 3GB RAM and 32GB storage. It’s not meant for resource-intensive use but rather, for multimedia purposes like binging on Netflix or YouTube videos.

It can do some light gaming just fine, as long as it’s not too heavy to run. If you need more RAM, there is a variant that comes with 4GB RAM. While our review unit is Wi-Fi only, there is a variant of the tablet that comes with 4G LTE support. With the use of a nanoSIM, which inserted in the same tray as the microSD card, you can get internet connection everywhere you go. 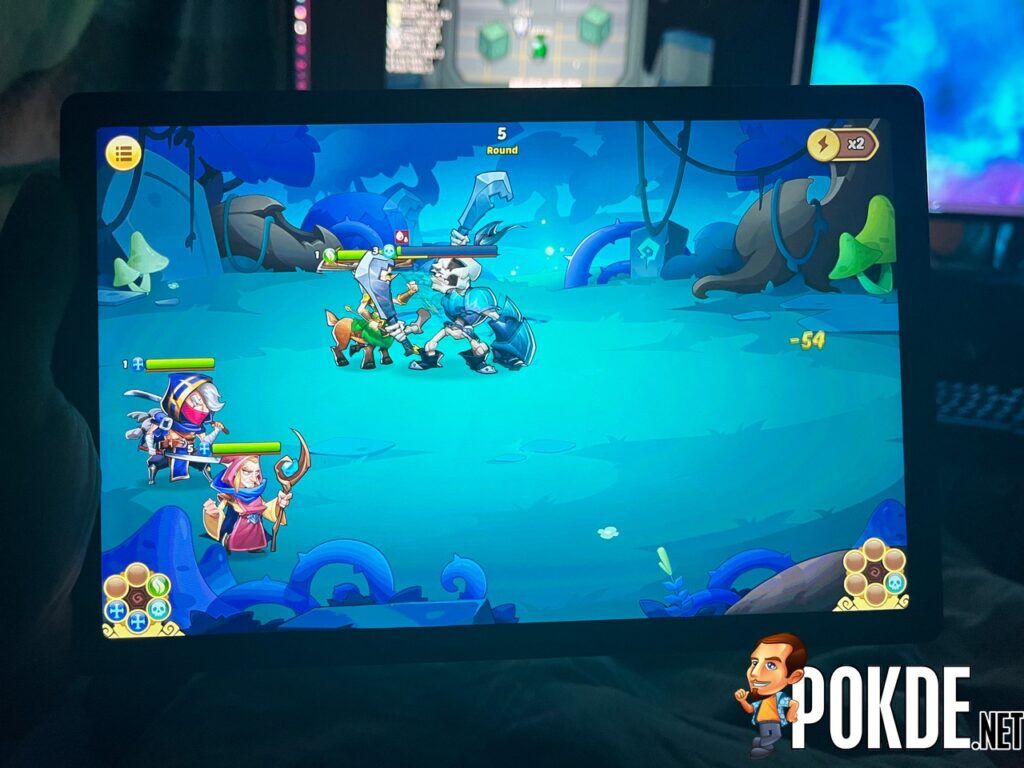 Samsung Galaxy Tab A8 Review – Gaming on the tablet

The Samsung Galaxy Tab A8 has four speakers; two on top and two on the bottom. It’s certainly the highlight feature of the tablet as it produces a fine amount of detail with a touch of bass. If it’s not good enough for you or you want a more personal listening experience, it does have a 3.5mm headphone jack, which is certainly great to have. 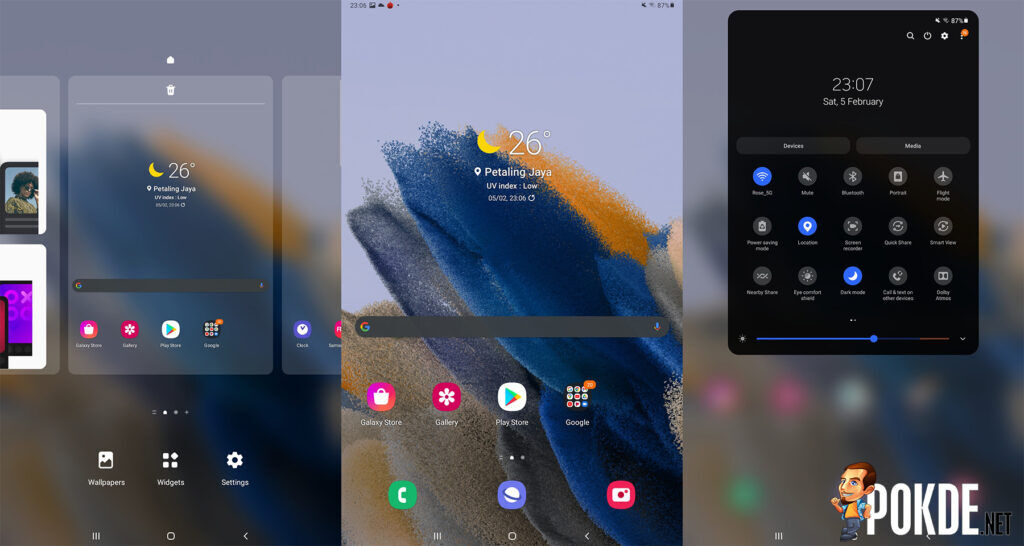 The Samsung Galaxy Tab A8 is running Android 11 with One UI 3.1 on top of it. It gives the device a rather clean look and is generally easy to navigate. It’s user-friendly enough that most people should not have trouble using it. I personally use it with Dark Mode as it’s easier on my eyes.

If you prefer an affordable tablet that is more compact than this, check out our review of the Samsung Galaxy Tab A7 Lite by clicking right here. 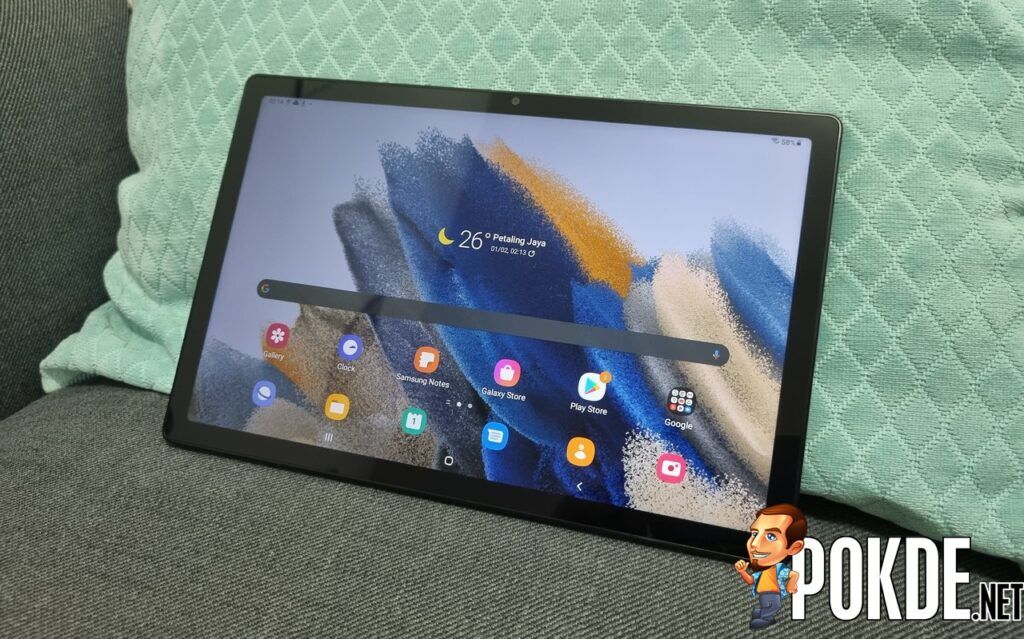 At RM999, the Samsung Galaxy Tab A8 is certainly a tablet that focuses on value. It’s not a high end performer but it should be more than adequate for productivity, web surfing, and multimedia entertainment. It has its fair share of drawbacks, such as the reflective screen and low RAM but the pros certainly outshine it enough for it to be an enticing offer.

At the end of our Samsung Galaxy Tab A8 review, I award this tablet with our Silver Pokdeward.

Aiman Maulana
Jack of all trades, master of none, but oftentimes better than a master of one. YouTuber, video editor, tech head, and a wizard of gaming. What's up? :)
Pokde Recommends
AndroidAndroid 11gadgetGalaxy TabGalaxy Tab AMalaysiaOne UIOne UI 3GadgetReviewSmartphone
MORE
Read More
286

The Wolf Among Us 2: A Telltale Series Official Trailer Released Virtually
Next