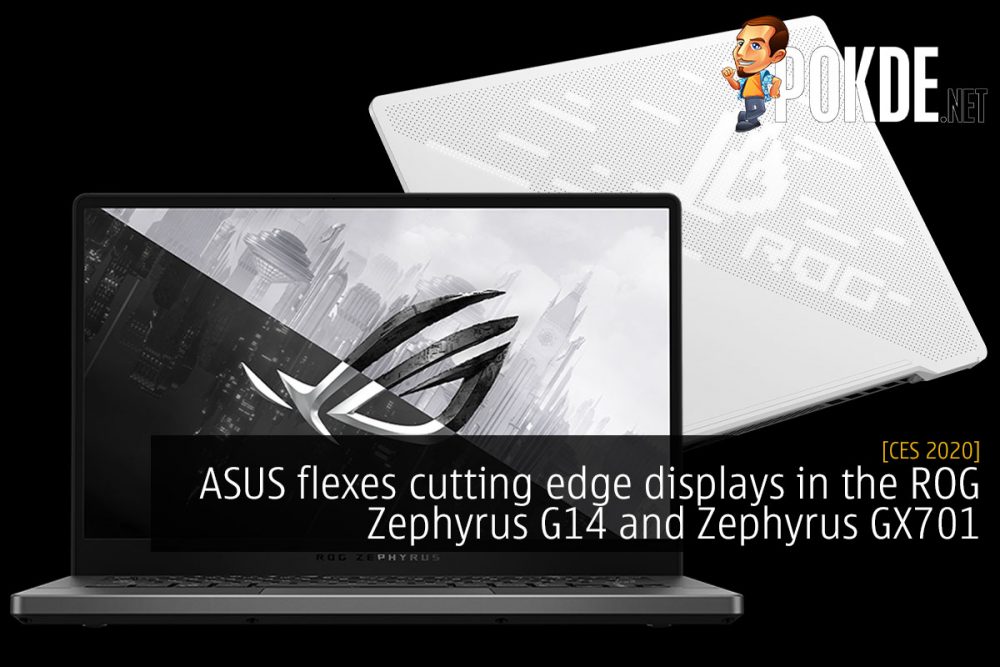 ASUS dropped a massive load at CES 2020, debuting more than their fair share of products at the event. Among them are the ROG Zephyrus G14 and Zephyrus GX701, both showcasing the next generation of laptop displays with unprecedented technologies.

It’s not unexpected for ASUS to focus on the displays with the ROG Zephyrus series though. The ROG Zephyrus series are designed for work and play, with most of them using PANTONE Validated high-refresh rate panels. This time, they packed a 240-zone, 1000-nit, 4K HDR display from AUO into the ROG Zephyrus GX701, upping their game from last year’s 16-zone, 400-nit, 1080p panel. The granular 240-zone backlight control is enabled via mini LEDs, reducing the unsightly halo effect that you would encounter with displays with fewer zones.

Moving on, the ROG Zephyrus G14 makes high refresh rate displays available in a more portable form factor. 14″ displays are generally reserved for ultraportables, but as the ROG Zephyrus G14 is a gaming laptop, it definitely needed something more. ASUS worked with their partners to come up with a 120 Hz panel just for this application, and it will definitely be a huge step up from any 14″ displays you have seen in terms of fluidity. And you get support for FreeSync too. If you are not interested in a high refresh rate, the ROG Zephyrus G14 also comes with a WQHD display, which is yet another unprecedented feature in 14″ laptop territory.

The ROG Zephyrus G14’s claims to fame doesn’t stop there. It also packs beefy AMD Ryzen 4000 series mobile processors based on the latest Zen 2 architecture, which can be configured with a GeForce RTX 2060 and up to 32GB of DDR4 3200 MHz RAM. While it runs on NVIDIA’s graphics, the Vega graphics in the AMD Ryzen APU is what allows for FreeSync support.

Aside from the hardware, ASUS also revamped the whole aesthetic of the ROG Zephyrus G series. The ROG Zephyrus G14 packs what ASUS calls an AniMe Matrix display which packs 1215 white mini LEDs with 256 levels of brightness control. Users can customize it with GIFs, build custom animations, type messages out, or just use visualization effects reacting to music. An update will also be released to allow it to serve as a notification panel of sorts for the laptop.

We can probably expect a closer look pretty soon when this laptop comes to Malaysia. Stay tuned for that!

Pokdepinion: I guess you can technically call the ROG Zephyrus G14 a dual-display laptop?