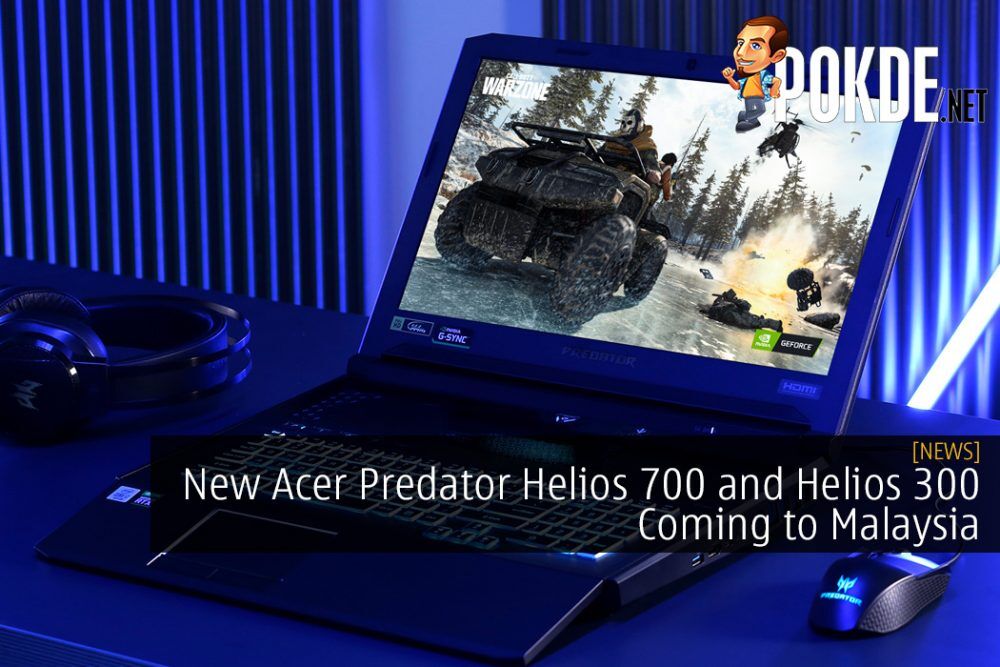 At a digital conference held earlier today, Acer Malaysia have officially unveiled their plans for the upcoming Acer Day 2020. It will be happening from 1st August 2020 to 30th September 2020, with new laptops being launched and a number of items up for grabs. For this one, we’re gonna check out the new Acer Predator Helios 700 and Helios 300. 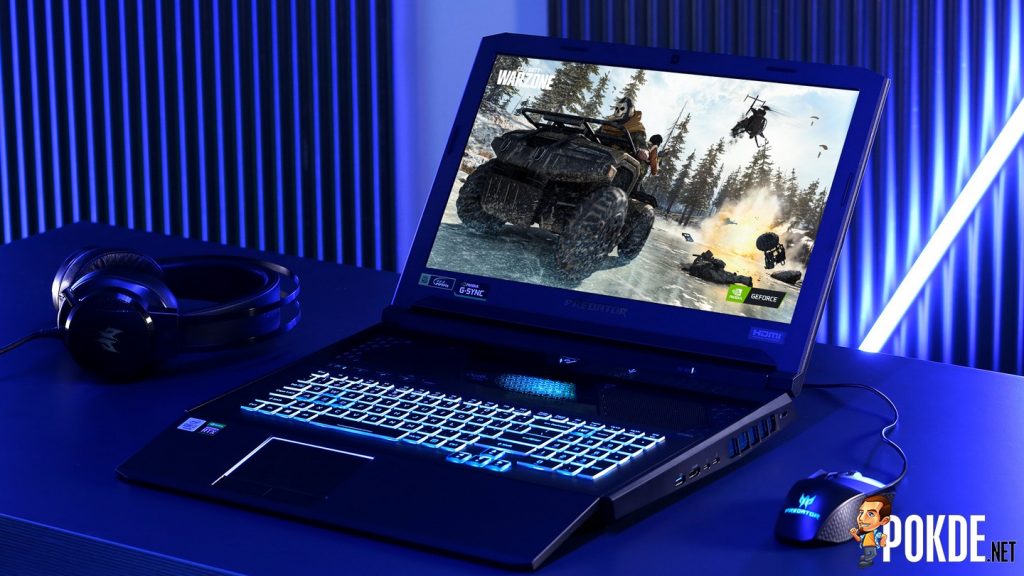 Designed as a mobile desktop replacement, the Acer Predator Helios 700 is a behemoth of a gaming laptop with the power to back it up. Now, it’s powered by the new 10th Gen Intel Core CPU, with consumers having the choice of either Intel Core i9-10980HK or i7-10875H. As for GPU, it will be a choice of NVIDIA GeForce RTX 2080 SUPER or RTX 2070 SUPER.

It uses a 17.3-inch Full HD display with 144Hz refresh rate and NVIDIA G-SYNC support. On the networking side, you can make use of KILLER DoubleShot Pro for better speed, stability, and performance when gaming online. It still retains the signature HyperDrift sliding keyboard with per-key RGB lighting, which can improve cooling immensely. The MagForce keys have been further improved, allowing for finer and controlled movements in-game, especially for racing games. 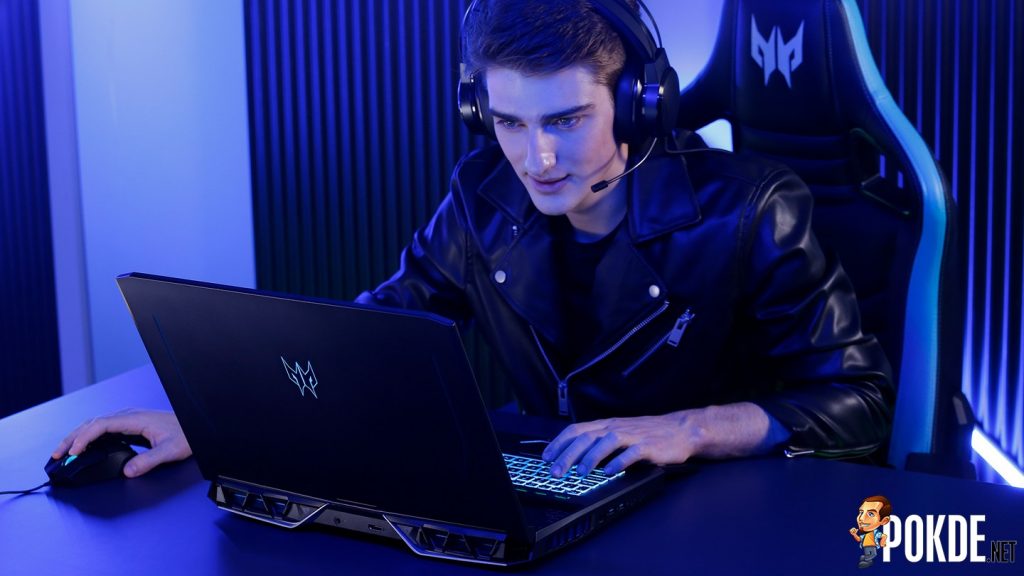 What’s interesting here is that Acer has equipped it with a new thermal solution called the Predator PowerGem. It’s a special thermal interface material (TIM) with high efficiency in heat conduction. This results in 3.83 times more vertical head conductivity than copper. The Predator PowerGem is added to the existing five copper heat pipes and works together with Acer CoolBoost technology as well as the 4th Gen AeroBlade 3D fans to keep the machine running cool. 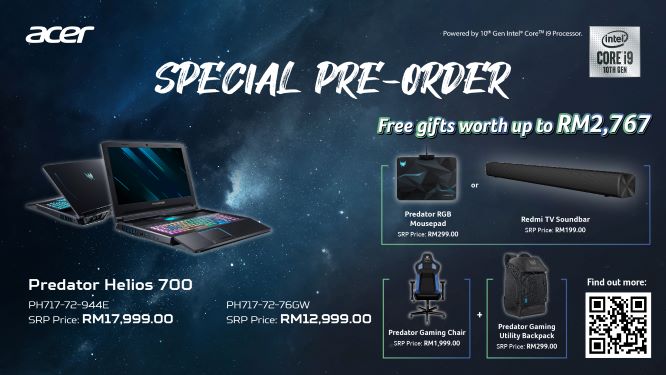 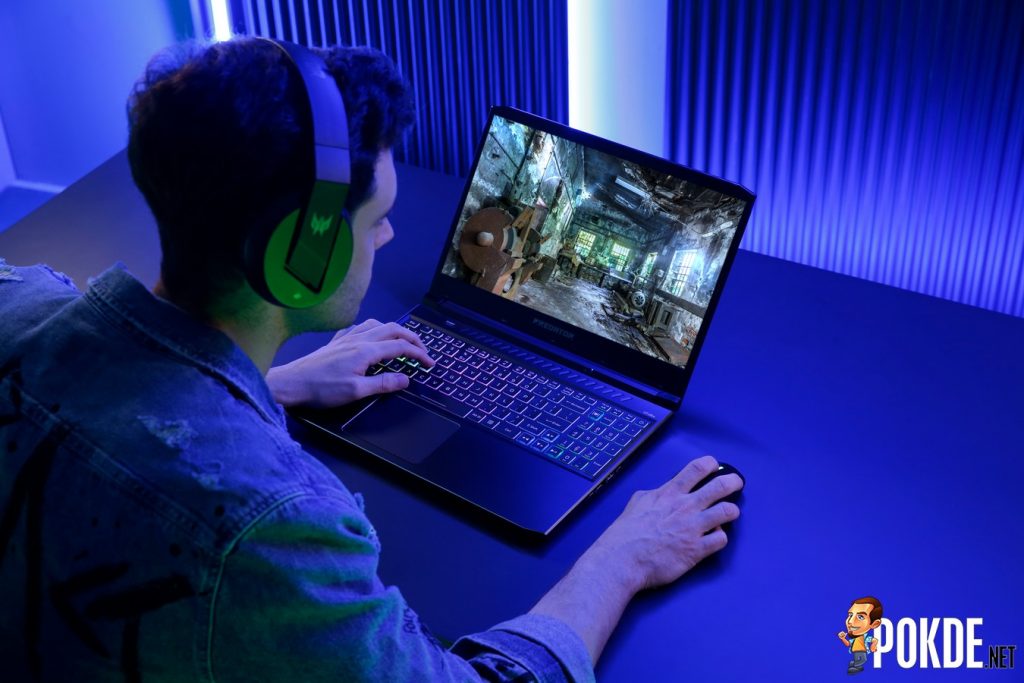 The Acer Predator Helios 300 is back and better than ever. This time, it’s powered by the 10th Gen Intel Core i7-10750H CPU and NVIDIA GeForce RTX 2060 GPU. It comes with a single stick 8GB DDR4 RAM and a 512GB NVMe PCIe SSD, which you can upgrade it further if you wish.

It uses a 15.6-inch Full HD IPS display with 144Hz refresh rate and 3ms response time. On the networking side, you can make use of KILLER DoubleShot Pro by combining the Intel Wi-Fi 6 and KILLER Ethernet E2600 for better speed, stability, and performance when gaming online. To keep the machine cool, you have the AeroBlade 3D fan technology. 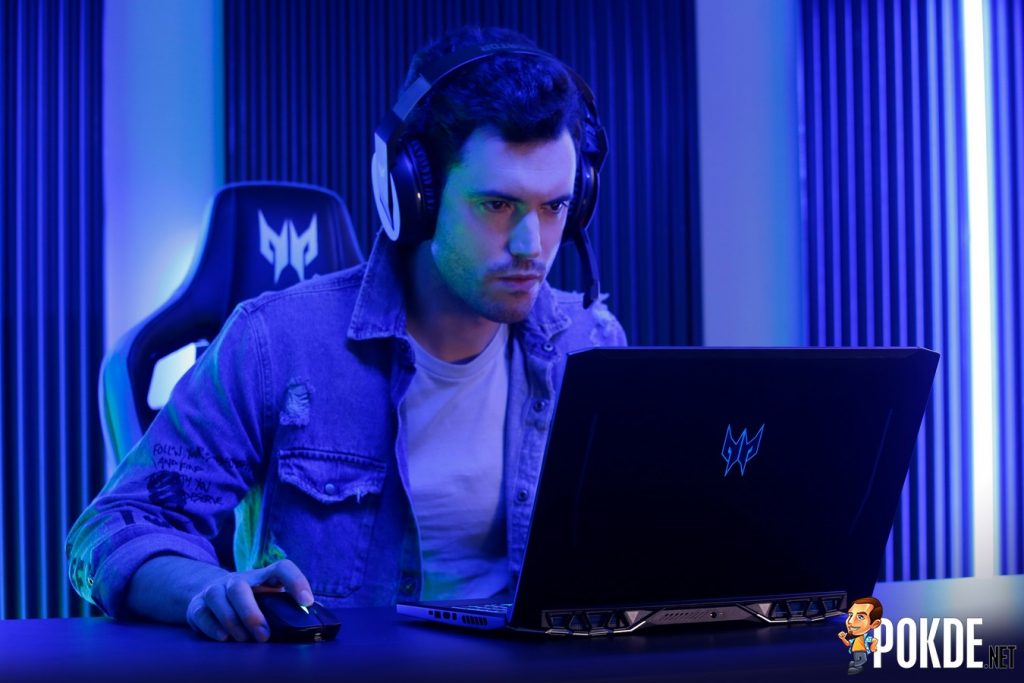 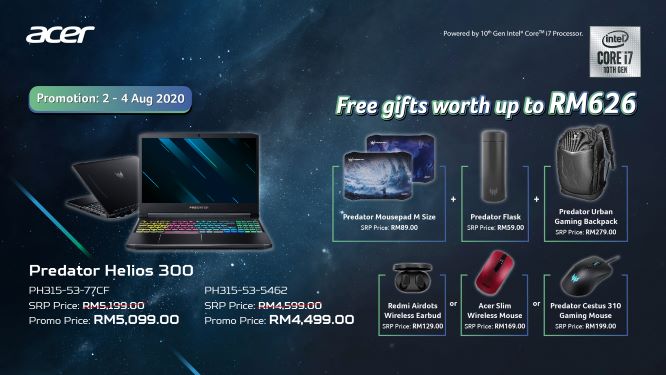 The Acer Predator Helios 300 will be retailing for RM4,599 for the Intel Core i5 variant, and RM5,199 for the Intel Core i7 variant. It will come with 2-years on-site warranty with accidental damage and theft protection. It will be available starting 2nd August 2020 onwards at all Acer official online stores and authorized resellers nationwide. If purchased between 2nd August and 4th August 2020, you will get an RM100 discount for either variants, and free gifts worth up to RM626, which includes:

We reviewed the previous generation Helios 700. Click right here to compare it to the new one.

Pokdepinion: Would definitely like to take the Helios 700 out for a spin. I really did enjoy its previous iteration, it’s such a beastly machine.

Aiman Maulana
Jack of all trades, master of none, but oftentimes better than a master of one. YouTuber, video editor, tech head, and a wizard of gaming. What's up? :)
Pokde Recommends
AcerAcer AspireAcer DayAcer Day 2020Acer PredatordigitaldiscountEventGadgetLaptopNews
MORE
Read More
598

Acer Celebrates Acer Day With Promos, Free Gifts And A Lot Of Fun
Next