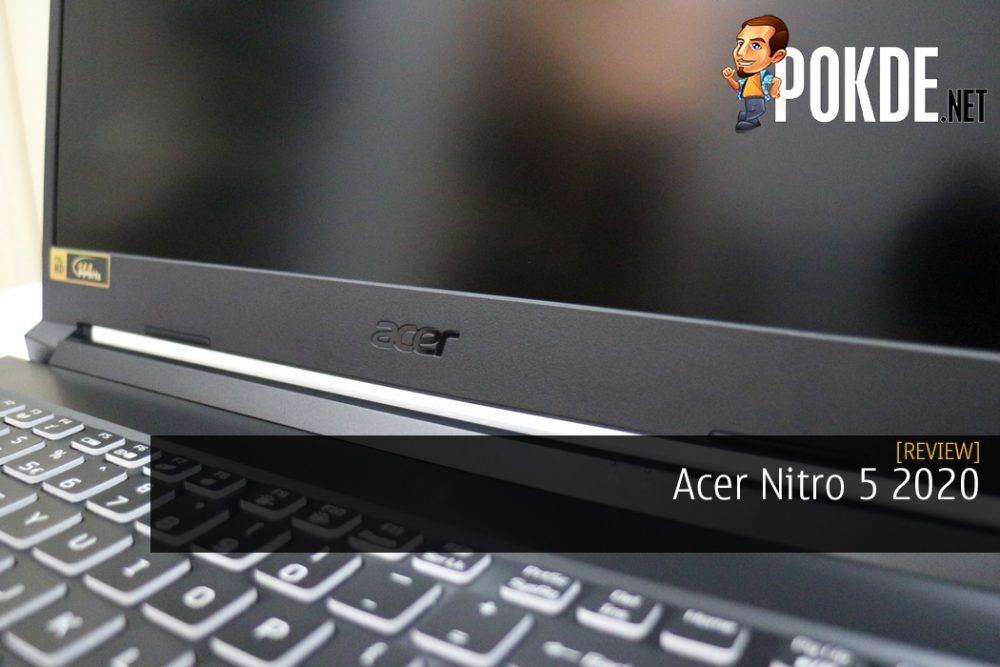 The Acer Nitro 5 is part of the company's value-focused offerings aimed at giving you the best bang for your buck, this time powered by the 10th Gen Intel Core CPU. Is it truly worth your money? Let's find out.

The Acer Nitro 5 2020 is a good budget gaming laptop. You get a good amount of firepower but you can easily tell that they had to make some sacrifices here and there.

The box itself has some pretty cool graphics of robots, along with a promo for the “eSports Social Platform” Planet9 on the bottom right corner. The QR code will take you directly to the site but in case you’re curious, you can click right here. Inside the box of the Acer Nitro 5 2020, you will find the following items:

As many of you may know by now, the Nitro lineup is supposed to be the more affordable, value-focused series of gaming products. The build itself is decent, but it mostly feels rather plasticky. The lid itself has the Acer logo taking center stage, with some slits on the left and right sides that arches towards the center as it goes down for a more aggressive look.

Open up the lid and you get a 15.6-inch Full HD 144Hz IPS display, a 4-zone RGB chiclet keyboard complete with Numpad, and your run-of-the-mill trackpad. The bezels are also on the thicker side but nothing excessive. It’s here that you start to see a bit more with Acer is focusing more on the internals to attract consumers that are more value-centric. The display does have a bit of a wobble, especially if you type a bit hard.

On the left side, you have a Kensington Lock, an air vent, an RJ45 LAN port, two USB-A ports, and a 3.5mm combo audio jack. On the right side, you have a USB-C port, another USB-A port, an HDMI port, and an air vent. In case you’re wondering, the proprietary charging port resides in the rear, sandwiched between the two rear vents. It’s worth noting that the rear is mostly red, allowing it to stand out a bit more in the blackness of its build.

Moving to the bottom, you have some air vents, speaker grilles, product stickers, and five stands. It’s worth noting that only four of the five stands are rubberized whereas the remaining one is small and purely plastic. Another thing is that you get a clear view of 10 screw holes here, with one hidden by the Acer warranty void sticker in the center.

Overall, the Acer Nitro 5 2020 looks like your typical gaming laptop. The build quality is decent and the looks can be improved. Given the range and design choice of this product however, we’re certain that they’re more focused on the internals and practicality than anything else.

As we’ve listed in the specifications table, the Acer Nitro 5 2020 uses a 512GB PCIe NVMe SSD. To be precise, it’s the SK Hynix HFM512GDJTNI-82A0A. As you can see from the CrystalDiskMark results, it’s pretty good. While we’ve seen better NVMe drives, this is still pretty solid results, especially in a budget laptop.

The story is slightly different in Cinebench R20 however, as the disparity between CPUs / machines can be seen clearer. It’s still a solid performer, but it seems like it can do better, perhaps when upgrading the RAM since this one is just using a single stick 8GB DDR4.

On Unigine SuperPosition in its 4K Optimized benchmark, the Acer Nitro 5 2020 performed decently enough for its specs. The performance is essentially on par with machines running 9th Gen Intel Core i7 and a GTX 1660 Ti or RTX 2060 graphics.

As for 3DMark’s Time Spy benchmark, results differ quite a bit. Some machines running 9th Gen Intel Core i7 and RTX 2060 and GTX 1660 Ti seemed to have scored noticeably better. I suspect this has more to do with RAM configuration than anything else.

In PCMark’s benchmark suite, it seems to indicate that the Acer Nitro 5 2020 gaming laptop is a decent all-rounder machine. You can easily use this for work and play without issues unless what you need to run is very resource-intensive. In which case, you might want to look into some upgrades.

As for gaming, the Acer Nitro V 2020 performed well enough in Full HD at each games’ highest settings. Running temperature for CPU and GPU is also good as I had no thermal throttling. Even at max fan speed, it’s not too noisy. It’s best to crank down the settings for some games so you can get a smooth gaming experience.

In PCMark’s Modern Office endurance test, you can see that battery life is clearly the weak point of the Acer Nitro 5 2020. Other gaming laptops running similar configurations can do better. Even in the gaming endurance test, it only managed a measly 56 minutes. This is a good sign that you definitely need to bring a charger around if you’re taking this outside.

As for my own use with web browsing, YouTube videos, Photoshop, and word processing, the results vary at times. Sometimes I find myself with 2 and a half hours while other times, I find myself exceeding 3 hours. This is to be expected as it’s based on my usage but basically, the battery life is average.

When I first received our Acer Nitro 5 2020 review unit, I legitimately thought it was faulty. I couldn’t get it to power up even after plugging in the charger. As it turns out, you have to push in the charging connector until you hear an audible click. Something to point out in case you run into similar issues.

The Acer Nitro 5 2020 is clearly a budget gaming laptop. The internals are noticeably better than its appearance, which isn’t necessarily a bad thing. It’s powered by the Intel Core i7-10750H CPU and NVIDIA GeForce GTX 1660 Ti GPU. As for memory, it has a 512GB PCIe NVMe SSD and 8GB DDR4 RAM clocking in at 2933 MHz.

While I do feel that the storage is plenty, it would be nice if it immediately came with 16GB DDR4 RAM (dual-channel). This will improve its usability greatly in all areas. I can understand not being able to do so to keep things within a budget, but if you plan on getting this, I highly suggest upgrading the RAM.

As mentioned earlier, it has a 15.6-inch Full HD IPS display with a 144Hz refresh rate. The colours, while not the best, is surprisingly good for a budget gaming laptop, with good viewing angles as well. You can open the lid up to roughly 155°. which is more than enough. There’s not much games that can let you truly enjoy the 144Hz refresh rate, with CS:GO most likely being the only viable one, but at least the option is there.

The laptop measures in a 23.9mm thick and 2.3kg in weight. It’s definitely far from being big and heavy, but we have seen lighter, more portable gaming laptops as of late, even from Acer themselves. I still don’t think it’s hard to carry around, but if you really need a light machine, do consider your options.

The Acer Nitro 5 2020 has a decent array of ports. It has a total of three USB-A ports, a USB-C port, an HDMI port, a combo audio jack, and an RJ45 LAN port. What’s great here is that the USB Type-A port on the right side supports power-off charging, essentially turning the laptop into an emergency powerbank. Would be great if they included an SD card reader here.

The keyboard on the Acer Nitro 5 2020 is comfortable to use. It has a 4-zone RGB keyboard with low travel distance and decent tactility. The addition of the Numpad makes things even more convenient, especially if you need to use this for work. I expected Acer to cut some costs and make it a single-zone RGB instead, so good on them for going a little extra here. The trackpad works fine but there’s nothing much to shout out about.

As this is a Nitro gaming laptop, it comes with the Acer NitroSense software. It isn’t as extensive as the PredatorSense software, but it’s still something. You can adjust fan speed, change power plan, customize keyboard RGB lighting, and more. The UI is simple and straightforward so most people shouldn’t have trouble with it.

Apart from that, you do have the KILLER Control Centre, specifically when used with a LAN cable, and the DTS:X Ultra software for a more immersive audio experience with 3D audio. I doubt you’d bother with it when used with internal speakers but with gaming headsets, it can give you that extra edge over your enemies in games, especially first-person shooters.

The speakers on the Acer Nitro 5 2020 gaming laptop are decent at best. It can produce decent details with a severe lack of bass, which is to be expected from built-in speakers. I personally wished that the volume could be louder, but it’s not too bad. You’re better off using your favourite pair of earphones / headphones / gaming headsets.

The Acer Nitro 5 2020 is a good budget gaming laptop. You get a good amount of firepower but you can easily tell that they had to make some sacrifices here and there. If you simply want a gaming laptop with 10th Gen Intel Core CPU and good GeForce graphics, you can consider this one.

The build quality could be improved, the bezels are on the thicker side, and the battery life is average. It still doesn’t change the fact that it’s a good value-for-money offering. With that I award the Acer Nitro 5 2020 gaming laptop with our Bronze Pokdeward.

Sequel To The Last of Us “Harder To Justify” Says Game’s Di...
Latest Video
Read More
377