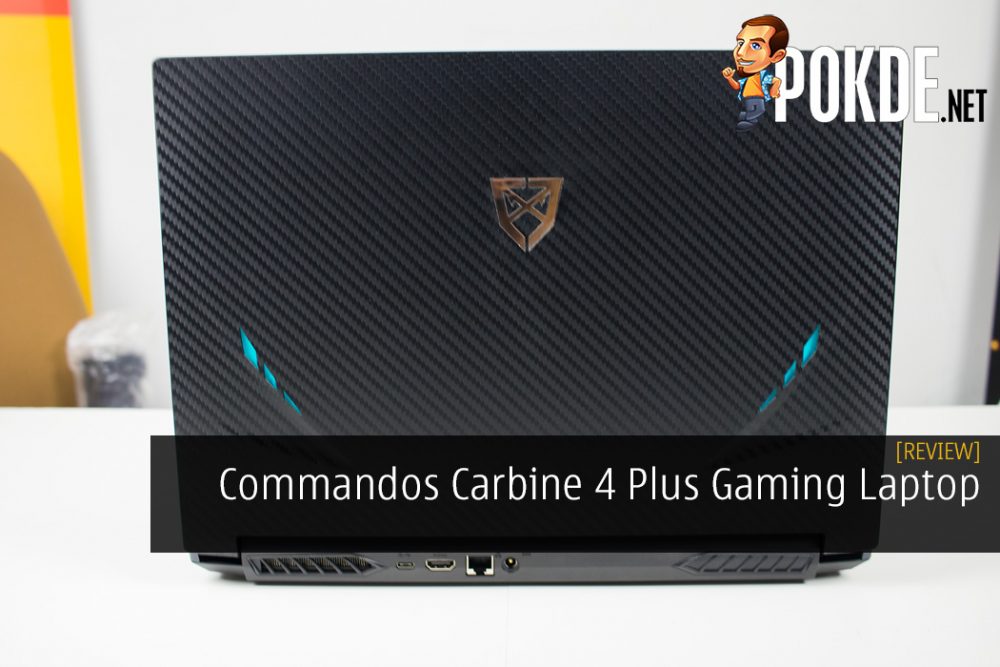 The Commandos Carbine 4 Plus is a compact gaming laptop by ArmoryX that can scale accordingly with your needs and budget. Is it worth the money? Let's find out.

The Commandos Carbine 4 Plus gives you good performance and can fit accordingly with your budget thanks to its customizable nature.

Unboxing the Commandos Carbine 4 Plus

You may receive some extras when you purchase it yourself but for the review unit, this is what we get inside the box of the Commandos Carbine 4 Plus gaming laptop.

The Commandos Carbine 4 Plus is a compact gaming laptop that’s actually lighter than it looks. The body is made mostly out of plastic, but the lid has a carbon fibre look going on. You also have the ArmoryX logo in metallic silver as well as two slits where you get some coloured lights when it’s powered on.

Open up the lid and you’ll be greeted with a 15.6-inch 60Hz Full HD IPS display. You also have a traditional full-sized laptop keyboard with a Numpad, albeit slightly cramped, and a trackpad below it. The power button stealthily sits above the ‘Home’ and ‘End’ keys, blending in with the rest of the laptop. The LED will glow white when it’s powered on.

The lid opens roughly 113°. The keyboard does have RGB lighting, but only single zone.

On the bottom, you have four rubber stands, some stickers with fine details listed, and slits for air ventilation as well as speakers. There are about 12 screws that you can find here.

Overall, the Commandos Carbine 4 Plus looks pretty good. It opted for a stealthier look without making it look boring. It’s a little bit thick but it is surprisingly light, which is great. Would be nice if they opted for a material other than plastic for the body and more lighting zones on the keyboard but that might make it pricier.

For our review unit, it uses a 512GB Phison SATA SSD. It’s worth noting that it can differ between Phison, Kingston, Patriot, and Western Digital. Customers can also topup a bit of money and opt for a speedier PCIe SSD instead.

Starting off with CrystalDiskMark, the results show essentially the average speed you get from a SATA SSD. The Commandos Carbine 4 Plus gaming laptop is using a 512GB Phison SATA SSD, in case anyone is wondering.

In Cinebench R15 against similar gaming laptops, the Commandos Carbine 4 Plus with its Intel Core i5-9300H performed well enough. While it looks like it got noticeably outclassed by 3 laptops, keep in mind that those are powered by Intel Core i7 CPUs.

It gets more interesting in the Unigine SuperPosition benchmark. The Commandos Carbine 4 Plus managed to achieve a score that is close to gaming laptops running an Intel Core i7 CPU and RTX 2060 GPU.

In 3DMark Time Spy, the difference widens up but it’s not by a big margin. Essentially, it can perform pretty well on its own already with its Intel Core i5-9300H and GTX 1660 Ti.

As for gaming, I was impressed. While all the games ran in Full HD, the settings were cranked up to the highest possible options. It performed admirably, even with some of the most intensive PC games available today. For a much smoother experience in those games, you just have to dial down the settings a little bit.

What’s more impressive is that there’s no thermal throttling and the temperatures are pretty good. CPU barely passes 80°C and GPU ran much cooler than that. While the fans did start to spin harder, it’s one of the more quieter cooling fans in a gaming laptop that we’ve tested thus far.

Battery life isn’t great but that’s not a surprise for a gaming laptop. I usually get about 3 hours with regular use which involves word processing, web browsing, light Photoshop, and some YouTube via Google Chrome. In case anyone is wondering, it’s using a 48.96 Whr battery.

The Commandos Carbine 4 Plus isn’t meant to be the most powerful gaming laptop around. Instead, it’s one of the more accessible machines around. It’s powered by the 9th Gen Intel Core i5-9300H and NVIDIA GeForce GTX 1660 Ti. Running temperatures are great and the fans are at acceptable noise levels even at maximum speed.

By default, it comes with a single stick 8GB DDR4 2666MHz RAM but there is a promo going on which will add another stick for free. Storage-wise, it uses a 512GB Phison SATA SSD, which may not be the speediest one around but it’s enough for most gamers and the storage capacity is more worth it. Would be great if it includes a 1TB HDD by default.

For a compact gaming laptop, the Commandos Carbine 4 Plus is a little bit on thicker side but to my surprise, it’s really light. While not in the same level as an ultrabook, you can still easily hold it up with one hand.

The 15.6-inch IPS display on the Commandos Carbine 4 Plus gaming laptop works well enough for gaming with minimal delay. Colours are good for gaming but not so much for creative work, slim bezels make it more pleasing to the eyes, and viewing angles are decent. It’s worth noting that the refresh rate is 60Hz and there’s no particular adaptive sync technology. Given the specifications, Full HD is perfect here.

There’s a decent array of ports on the Commandos Carbine 4 Plus. You have three USB-A ports, a USB-C port, mDP, HDMI port, RJ45 LAN port, an SD card reader, and separate jacks for headphone and microphone. I do like the fact that the display connectors and charging port is located at the back, allowing for easier cable management and a cleaner setup.

The keyboard on the Commandos Carbine 4 Plus is decent. It’s comfortable to type on and works good for gaming. Noise is barely audible, which is a plus. The trackpad works just like any other laptop trackpad so nothing to shout out about here. Would be great if it had more RGB lighting zones here instead of just a single zone lighting.

Given the customized nature of ArmoryX laptops, you might think that this doesn’t have a software to customize the machine. It actually does and it’s Control Center 3.0 by CLEVO. It allows you to change power modes, add macro keys, customize the RGB lighting, and adjust the fan speed.

While the UI itself is simple and easy to use, it’s primitive in comparison to other software like ROG Armoury Crate and Acer PredatorSense. It doesn’t show detailed statistics such as CPU Usage, and your options are limited. It’s essentially a barebones utility software with no expandability.

On the sound department, it was surprisingly good for a laptop of this caliber. It’s loud, has decent amount of depth, and the audio being directed to you makes it sound more wholesome especially for gaming. You can do some fine-tuning using the Sound Blaster Connect software, where you can tailor your experience accordingly for speakers and headphones. Using a good headset may be better, but at least the speakers are good enough.

ArmoryX is known for gaming laptops that can scale accordingly with users with its customized specifications. The Commandos Carbine 4 Plus isn’t as customizable but you can get the specifications that works with your budget, and it’s worth the price. It looks good and it works great.

However, it’s not the perfect gaming laptop as it does have its quirks. The chassis could use an upgrade, the RGB keyboard lighting is only single zone, and the display is only 60Hz. If it was at least 120Hz, I think it would be more viable for plenty of gamers out there.

Starting from RM3,899 with a free upgrade to 16GB DDR4 RAM (8GB x 2), it’s still a good value-for-money purchase. With that, I award the Commandos Carbine 4 Plus with our Silver Pokdeward.

Big thanks to ArmoryX for providing us with this laptop for review. If you want to know more or are interested in getting one, click right here.

Aiman Maulana
Jack of all trades, master of none, but oftentimes better than a master of one. YouTuber, video editor, tech head, and a wizard of gaming. What's up? :)
Pokde Recommends
CommandosCOMMANDOS gaming laptop seriesGaming laptopGTX 1660 TiIntelLaptopMalaysiaNVIDIAReview
MORE
Read More
26346 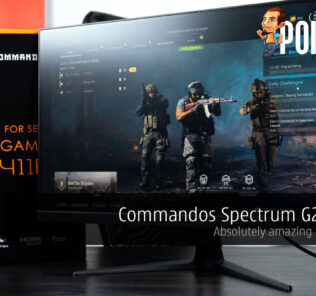