Death Stranding Review – Prepare for One Heck of a Ride 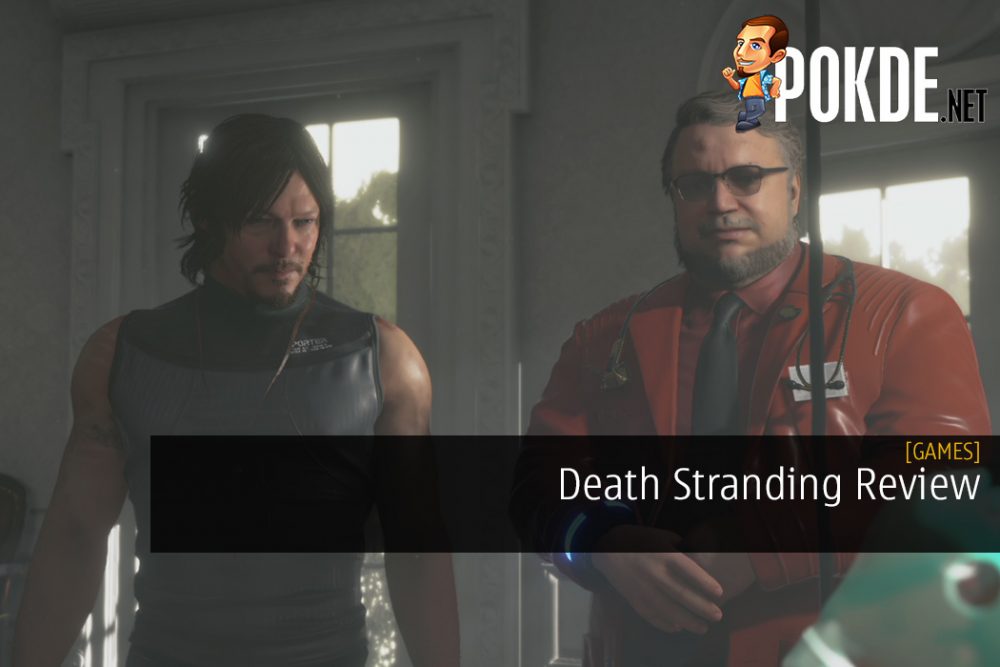 The latest game by Hideo Kojima since he left Konami, Death Stranding is an oddity that is set to blow your mind. Here's our review to see if it's worth it.

Death Stranding is a surprisingly fun game but it’s biggest appeal is its storytelling, which can be tough to wrap your head around.

What is Death Stranding About?

Death Stranding is an action game set in a fictional post-apocalyptic United Cities of America, where a cataclysmic event resulted in invisible creatures known as “BTs” to roam the Earth. These creatures can cause explosions when consuming the dead as well as “Timefall”, a rain-type phenomenon which rapidly ages and deteriorates anything it hits. Due to the inherent danger, survivors have isolated themselves in underground bunkers.

The game follows Sam Porter Bridges, a deliveryman who works with the BRIDGES organization to help rebuild the nation. In order to do that and find out what happened to a previous expedition, he must deliver cargo across the fractured remains of civilization and re-establish various Strands, a line of communication connecting survivors and different waystations across the nation.

The Strands will improve the Chiral Network, which will then allow more people to stay connected and leave their fear-induced isolation. It will not be an easy journey however, as Sam will have to face insurgent forces and supernatural forces beyond imagination that now roam the land, leaving havoc and despair in their wake.

The Life of a Deliveryman

After seeing the trailers and playing the prologue, I’m sure many would still be confused as to how Death Stranding will play out. Essentially, you will be taking on the role of a deliveryman. You will be taking orders, both mandatory and optional, and travel to the required destination. You can travel by walking or taking a vehicle, but you will be spending most of your time walking as the landscape is mostly suitable for travel on foot.

As a deliveryman, you will be carrying a wide variety of cargo on your body. One major gameplay aspect is to manage your cargo as the weight plays an integral role on how you move. If you’re carrying light, you will move around normally but as the weight increases, you will start to move slower, use up more stamina, and will have to constantly balance yourself to avoid falling.

While falling doesn’t seem like a big deal, it will damage your cargo. The condition of your cargo upon delivery will affect your final score, which is denoted by “likes”. Likes function similarly to experience points as it’s needed to level up your rank. When you’re delivering cargo to people, it will also improve your Connection Level with them, which can yield a variety of rewards and perks.

Throughout your travels, you will stumble upon lost cargo scattered around the map. You can pick these up and either submit these items as lost cargo via the Postbox or deliver them yourself. The latter will yield more likes but can be troublesome depending on the delivery location as you will often find yourself encumbered by the increasingly heavy cargo.

For the most part, the game works perfectly fine and can be surprisingly entertaining. However, the long walks can feel rather boring as the game is designed for you to explore the world alone. Sure, there are elements that other players can put up that can help you out in your journey, but you can never actually bump into them. Organizing the cargo can be a gratifying experience but seeing your character fumble around as if he doesn’t know how to walk can get frustrating at times.

The most important task that you are given, aside from the mandatory cargo deliveries, is to reconnect the strands in various areas of the map. This is deemed necessary to add these areas into the Chiral Network, a Bridges communications network that allows for instant data transfer. This will usually be done automatically by heading to disconnected cities and progressing through the story.

While it may not seem like much at first, it is an important process as you will unlock more new buildings, equipment, and increase the Chiral Network bandwidth which will allow you to construct more buildings. Be it more portable Postboxes or Watchtowers, it will give you more flexibility when going about your travels.

Travelling through the world isn’t without danger however as there are a few threats to keep in mind. The first is Beached Things, typically referred in the game as BTs. You will know that BTs are nearby when your Odradek scanner automatically activates. While these creatures are typically invisible, you can see them with the help of your Bridge Baby (BB).

When confronted with BTs, you have the choice of either running away or fighting them. To run away, you must move by crouching and cover your breathing to avoid being detected. Hold your breath too long and you will end up taking a deep breath, which can alert them to your location. If you can’t simply run, then it’s time to fight.

You can fight BTs using an EX Grenade, but these only serve as a repellent. Later in the game when you’ve gained hematic-based weaponry, you can truly kill them. The standards BTs won’t take much but the larger ones will require a lot more effort. If you have the resources for it, it’s best to kill them but if you don’t, then try your best to run.

Lastly, you also have regular humanoid enemies to deal with. For the most part, you have to deal with MULEs, a cult that is obsessed with cargo, and terrorists known as Homo Demens. For the former, you can just run away but if you do fight them, typically, your options are generally to knock them out. By far the easiest method is to sneak up behind them and use your Strand. Just keep in mind that you are vulnerable in the tie-up animation.

You can use non-lethal grenades to temporarily incapacitate them, and then proceed to tie them up with your Strand if needed. Alternatively, you can always rely on melee combat, which feels oddly similar to Metal Gear Solid. You can attack enemies using cargo but don’t use important ones as it will damage the cargo by quite an amount.

It gets much easier later on in the game when you receive new weapons like the Bola Gun, but keep in mind that you may need to take additional measures to subdue them. With terrorist enemies, you’ll have to be more aggressive as they are simply out for blood. For this, your best choice is to use the lethal weapons in your arsenal.

For the most part, combat is rather simple but it does give you a sense of helplessness, especially when you’re facing a group of enemies in one go. While stealth would usually be the best option, sometimes you don’t have a choice. It would be great if some of the equipment is given to you earlier in the game, and if there was an added emphasis on stealth rather than direct combat. Given the sense of solitude that the game makes you feel, I feel like that combat should be tweaked in that direction instead.

Death Stranding’s biggest appeal is its storytelling. It’s one of the more bizarre, mind-blowing storylines ever in a game but it can be one that’s hard to grasp. You will need to focus on what’s happening and invest a bit of time in understanding the game to truly appreciate what it has to offer.

As for the gameplay aspect, it can be fun especially when the rewards are gratifying but you will feel like you’re running a chore simulator from time to time. From the endless walking to balancing your cargo to ensure that you don’t fall, it’s not a game that everyone has the patience for. If you can soldier through it, the storyline alone is worth the play.

And with that, I give Death Stranding our Silver Pokdeward.

At the moment, Death Stranding is a PS4-exclusive game with a limited edition console available. However, it will be coming to PC sometime next year.

Aiman Maulana
Jack of all trades, master of none, but oftentimes better than a master of one. YouTuber, video editor, tech head, and a wizard of gaming. What's up? :)
Pokde Recommends
ActionadventureconsoleDeath StrandingGaminghideo kojimakojima productionsMalaysiaGamingPS 4ReviewSony
MORE
Read More
702

The Legend Of Zelda: Breath Of The Wild 2 Delayed to 2023
Comments
Leave a response