Edifier R1010BT bookshelf speaker review; Jack of all trades, master of none 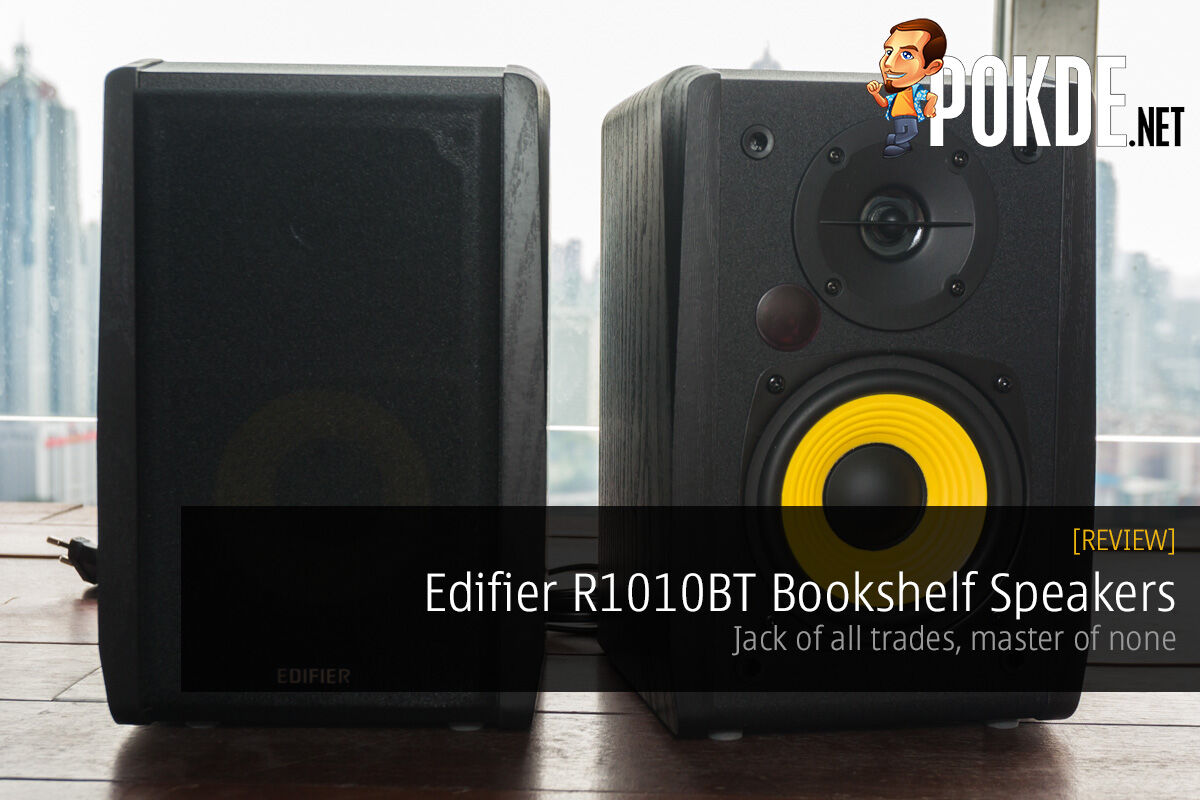 - Controls on the back are very inconvenient
- No IR controller
- Status LED is annoyingly bright
- Bass doesn't reach down low, can sound a bit boomy

The Edifier R1010BT makes a compelling case for an affordable pair of bookshelf speakers with Bluetooth support.

After moving up the ranks of Edifier’s bookshelf speakers range, we are now back at the entry-level once again to check out the Edifier R1010BT. The Edifier R1010BT is an upgrade over the Edifier R1000T4, the most apparent of which is part of its name: Bluetooth. With an added input option and a different look, does the Edifier R1010BT have an advantage on the most important aspect of a speaker, the sound quality? We will get to that, but first let’s get to the unboxing. 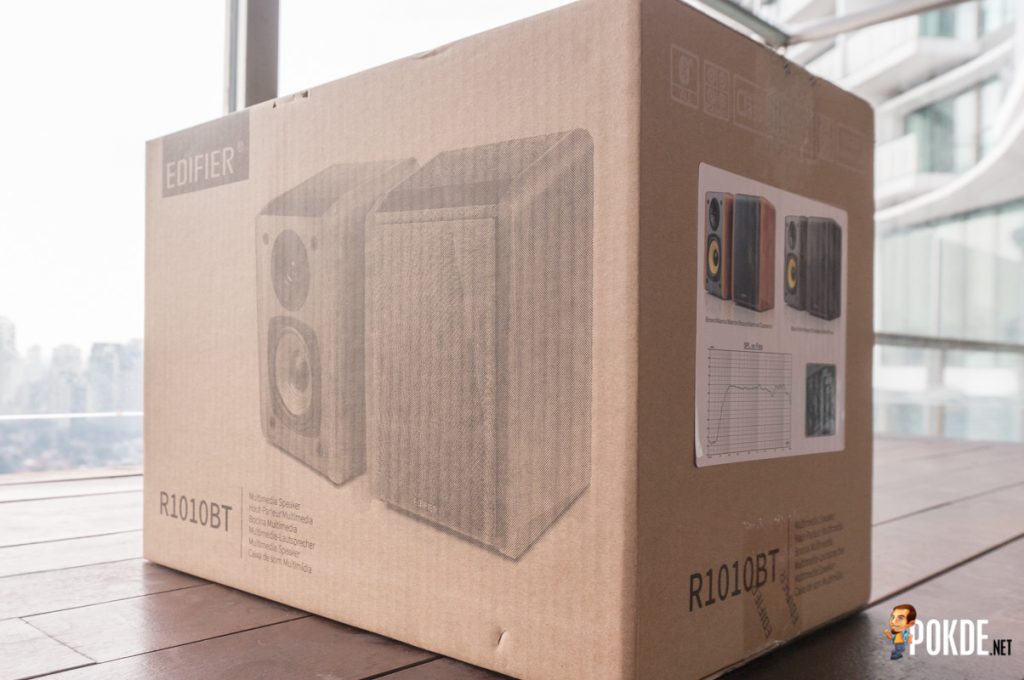 The Edifier R1010BT comes in a plain cardboard box, a change from the glossy color printed packaging that the previous Edifier speakers we have reviewed came in. Over on the right of the packaging we have a sticker with the frequency response graph and the colors the speakers come in. We have the black version here with us. 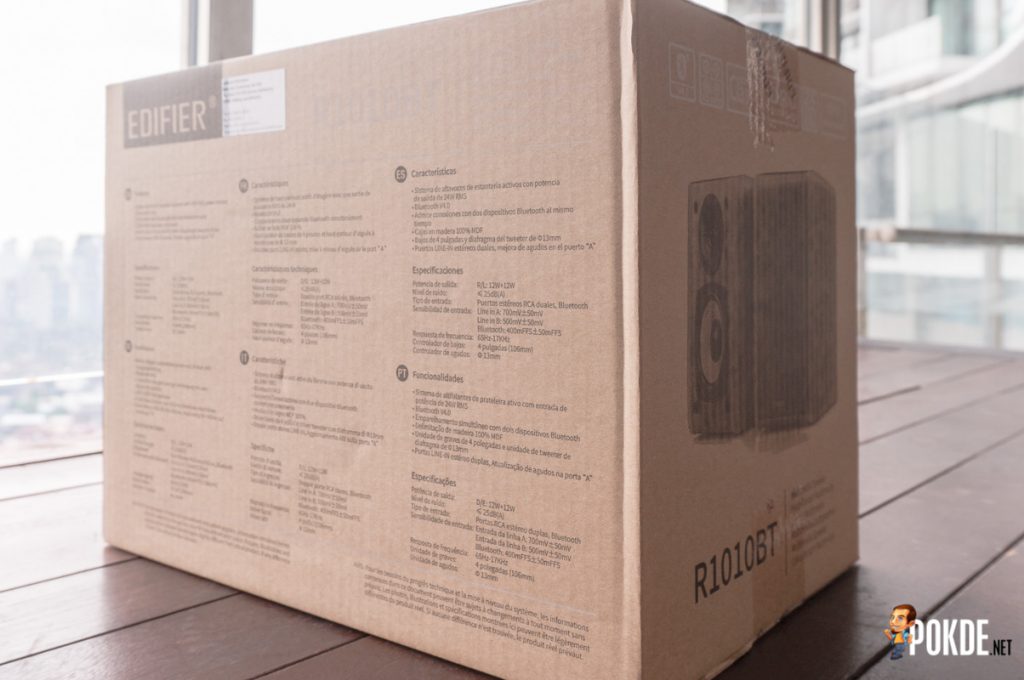 The back of the packaging is where we find the specifications and some of the highlight features of the Edifier R1010BT. Bluetooth 4.0 support is present here, a great addition to allow the Edifier R1010BT to work with your HTC U11 or iPhone 7. 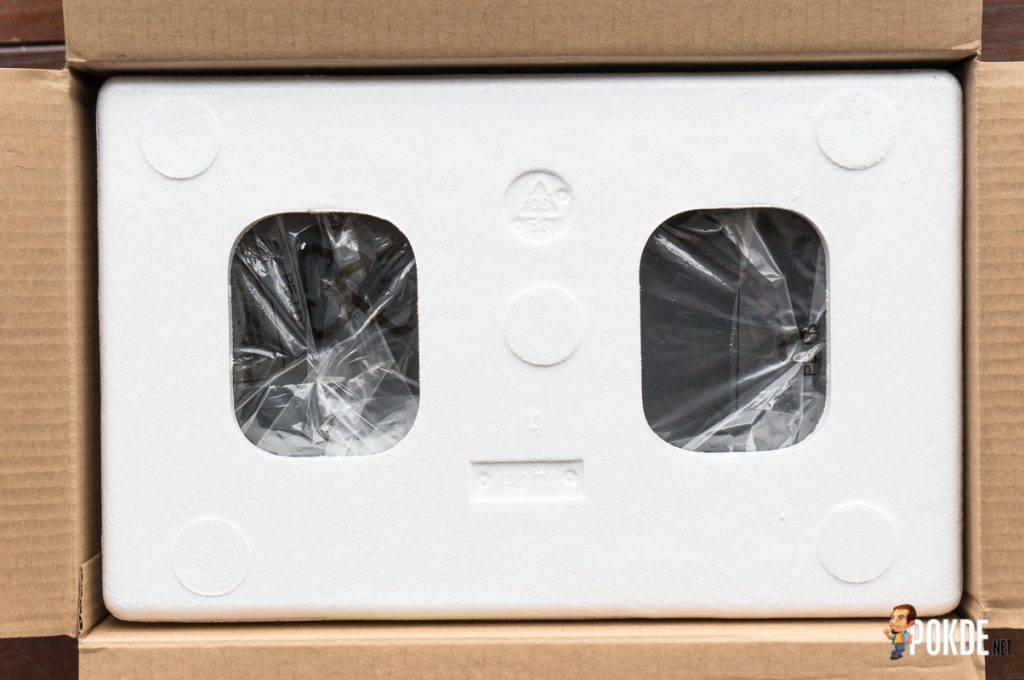 The speakers are held in place by polystyrene. I prefer the molded pulp trays Edifier used before this, as the polystyrene blocks shed little particles all over my floor when I was unboxing the speakers. Considering molded pulp is also more recyclable than polystyrene, this shift is quite baffling. 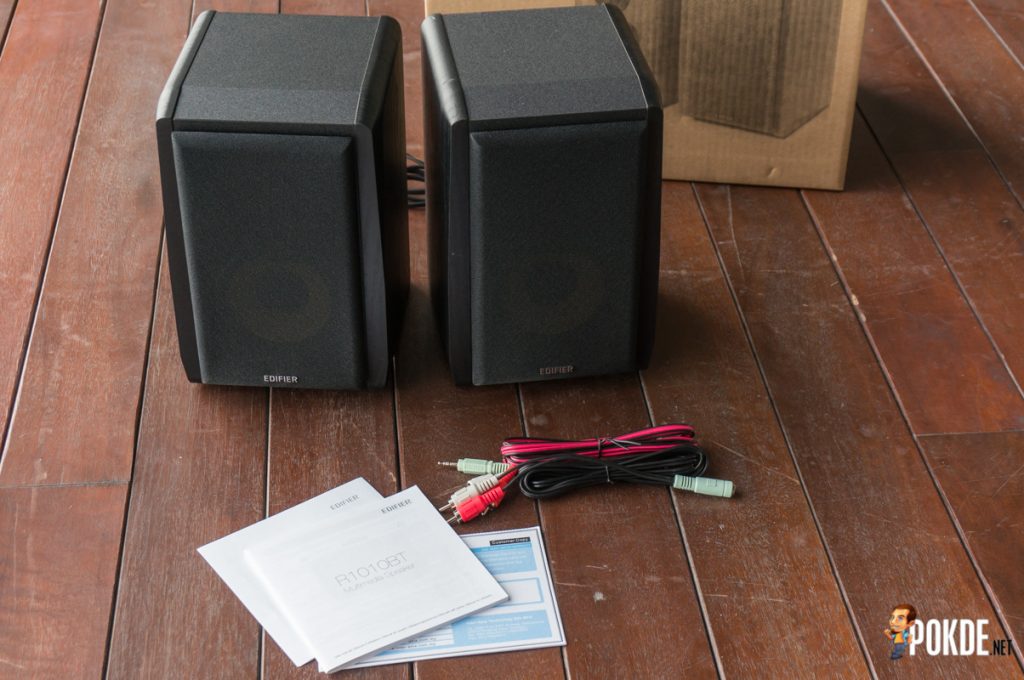 We have here the entire contents of the package. We get a 3.5mm to RCA cable, 3.5mm female to RCA adapter, speaker interconnect wires, standard documentation and of course, the Edifier R1010BT in black. I am not sure if the 3.5mm to RCA adapter is a cost-cutting measure, but since I don’t use it, at least it helps me save space when storing it away.[nextpage title=”Appearance”] 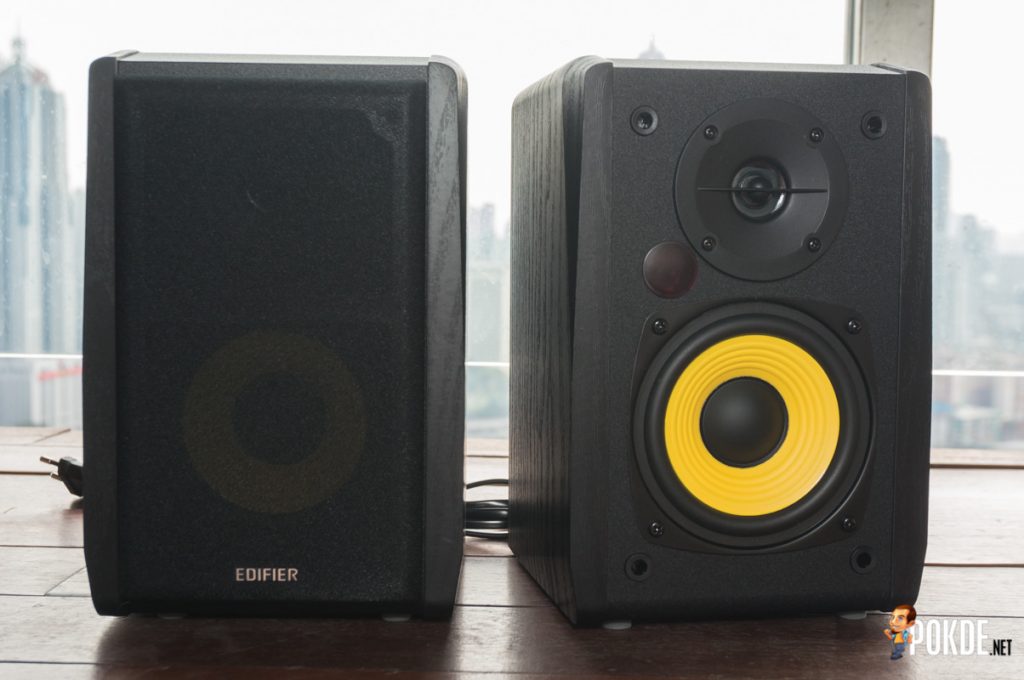 As usual for Edifier speakers, the Edifier R1010BT came out of the box with a black mesh protecting the drivers. You can opt to remove the mesh to showcase the drivers, with the yellow woofer particularly standing out with the all-black design of the Edifier R1010BT. There is a little circle insert between the woofer and tweeter, looking very much like the IR receiver found on higher end Edifier speakers, but sadly that’s where the similarities end. It is actually a window for the status LED. The contrasting wood grain finishing on the sides and rough matte surface along the center line of the speaker enclosures look really good in my opinion. There are also a lot more chiseled edges here and there to further enhance the aesthetics of the speakers. 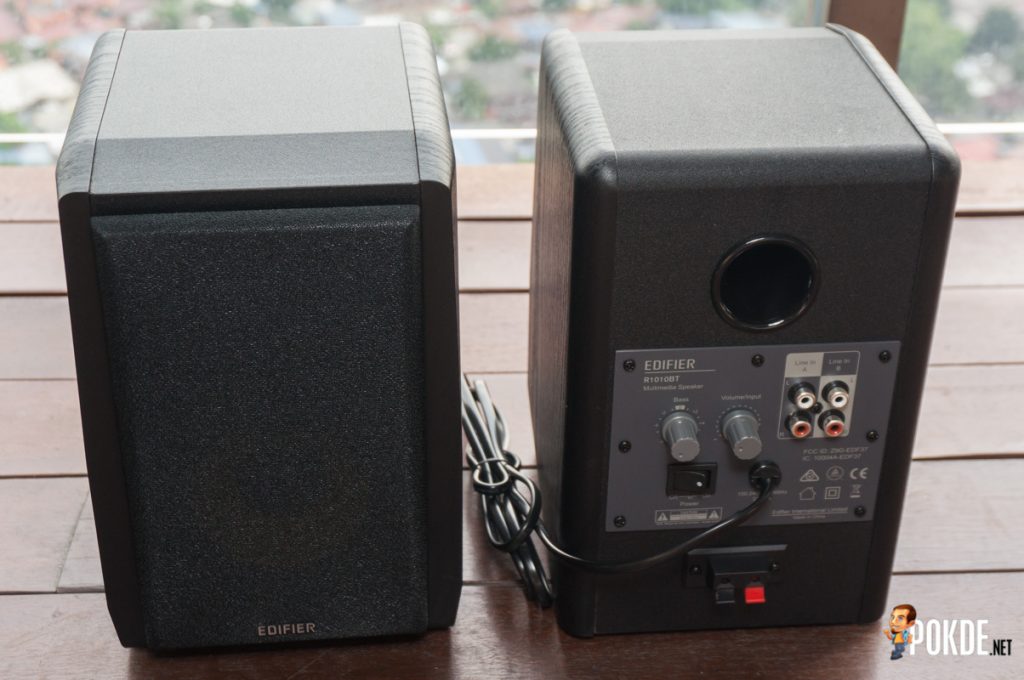 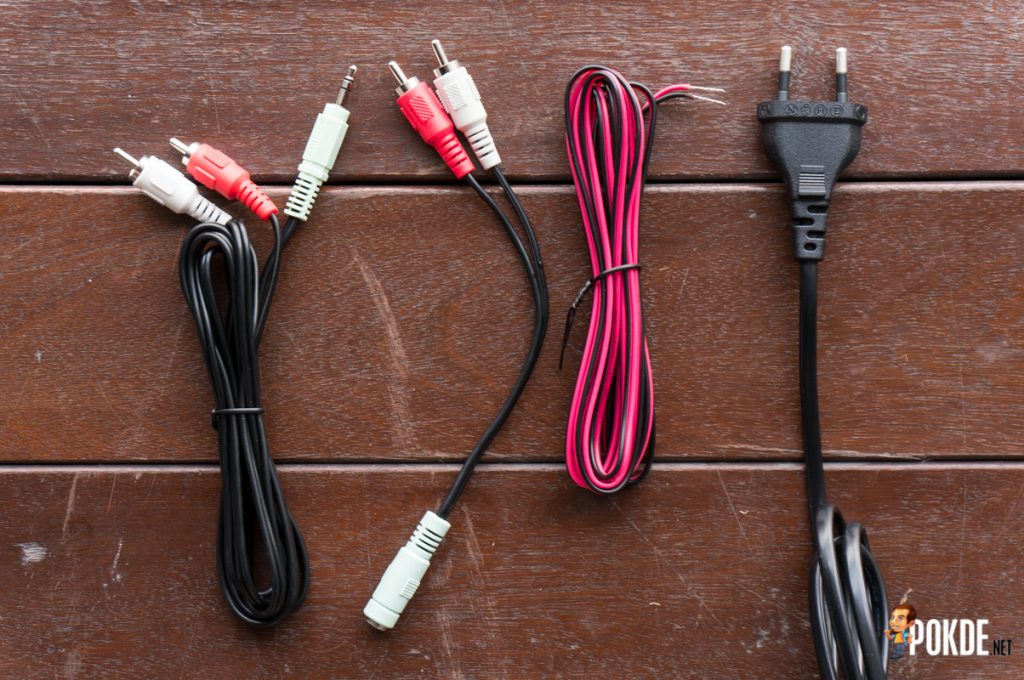 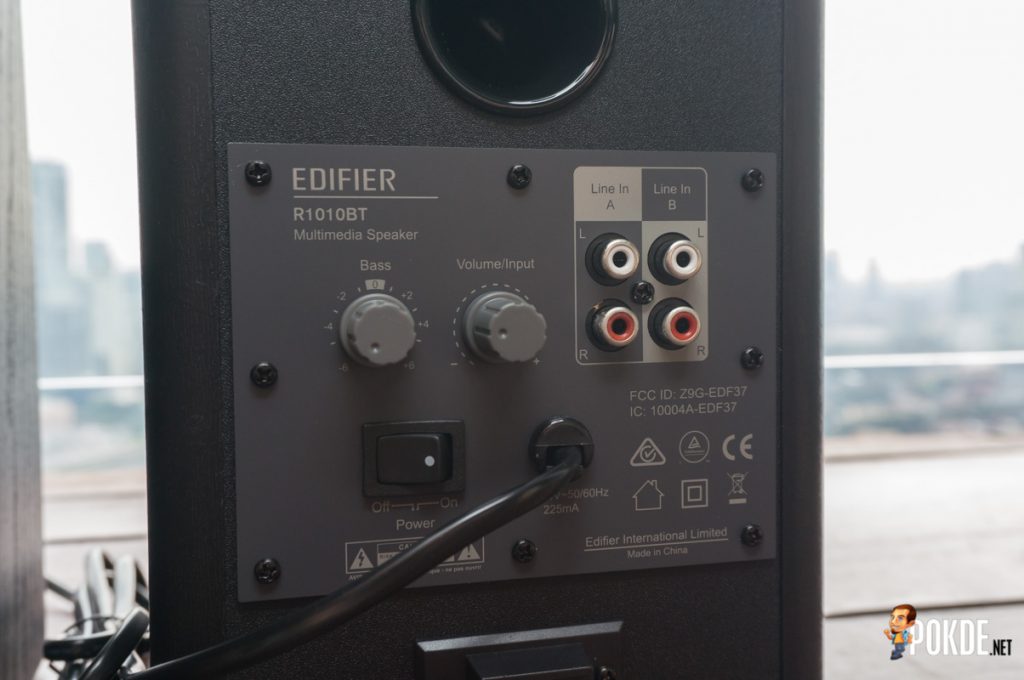 Well I am no fan of controls on the back, but they allow Edifier to have all the electronics situated near the back of the speaker, and reduce the cutouts they have to make on the enclosure of the speakers. It is quite annoying to have to stretch to reach the back of the speaker, but hey, maybe it’s Edifier’s way of telling me to do a few random stretches when working? Still, I would prefer controls on the sides. The volume dial allows you to swap inputs by tapping on it. The lack of an IR controller means that you can’t put the Edifier R1010BT into spots where you can’t reach around the back to fiddle with the controls. 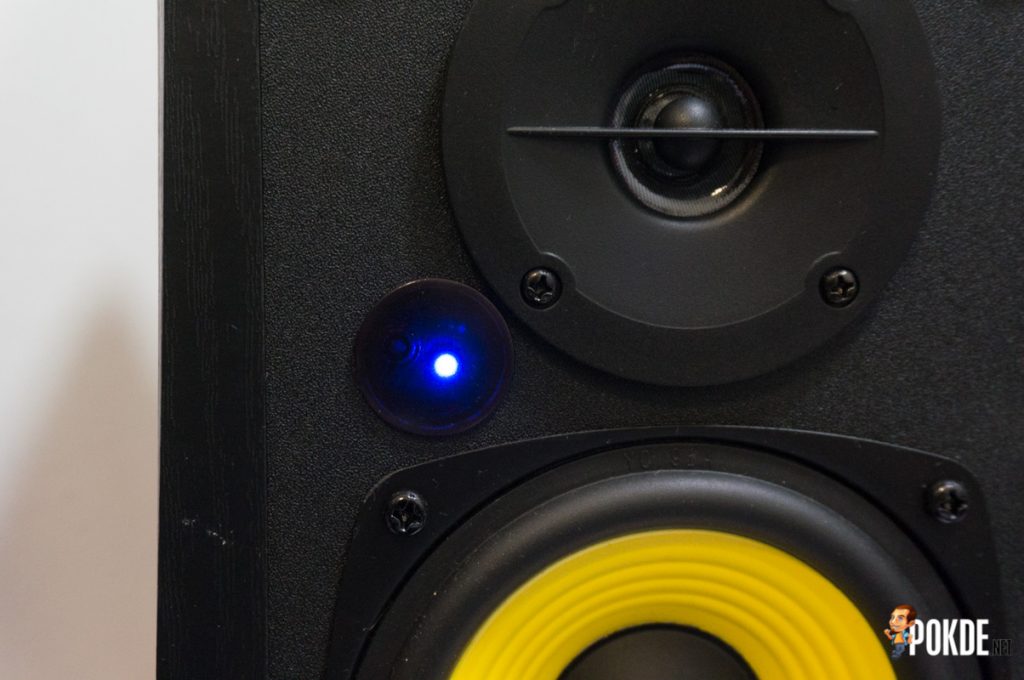 To know which input the Edifier R1010BT is receiving audio from, you just have to look at the false-IR-receiver-which-is-actually-a-status-LED. If it glows blue, the speaker will be in Bluetooth mode, and if it glows green, it is in line-in mode. The LED is annoyingly bright, and unlike the LEDs on the Edifier R1700BT and Edifier R1280T which have their status LEDs in the control cutout on the side, the one here is right in your face. Yes, this little green LED will be absolutely glaring if you are working in the dark. Perhaps yet another measure by Edifier to improve your working conditions? 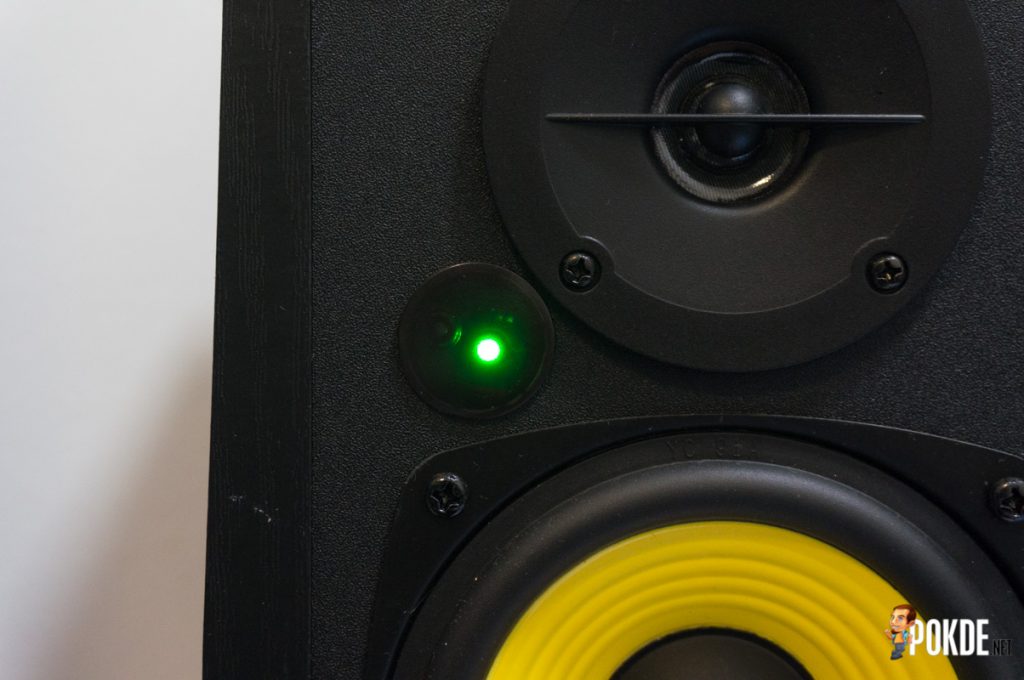 The above is true over Bluetooth too, but there is a noticeable audio delay when watching videos and gaming on my Honor 8. I would say the Bluetooth implementation is pretty good, with a decent range as well. I could get to around 10 feet before a wall in between me and the speaker would cause drop outs. The problem with the addition of wireless input to the Edifier R1010BT is that there is no remote control for me to adjust the speaker volume from a distance. I would also have to swap inputs by tapping the volume dial, not the most convenient of ways. On the bright side, the Edifier R1010BT supports pairing with two Bluetooth devices, but the first device to initiate playback will get priority, having to pause before the second device’s audio will be played.

Loudness wise, I would consider the Edifier R1010BT to be rather loud, easily filling my small studio apartment with music without any hint of distortion. Understandably they won’t sound the best from really far, but I would consider it sufficient for some background music in parties or what not.

Our thanks to Edifier Malaysia for the Edifier R1010T in this review. 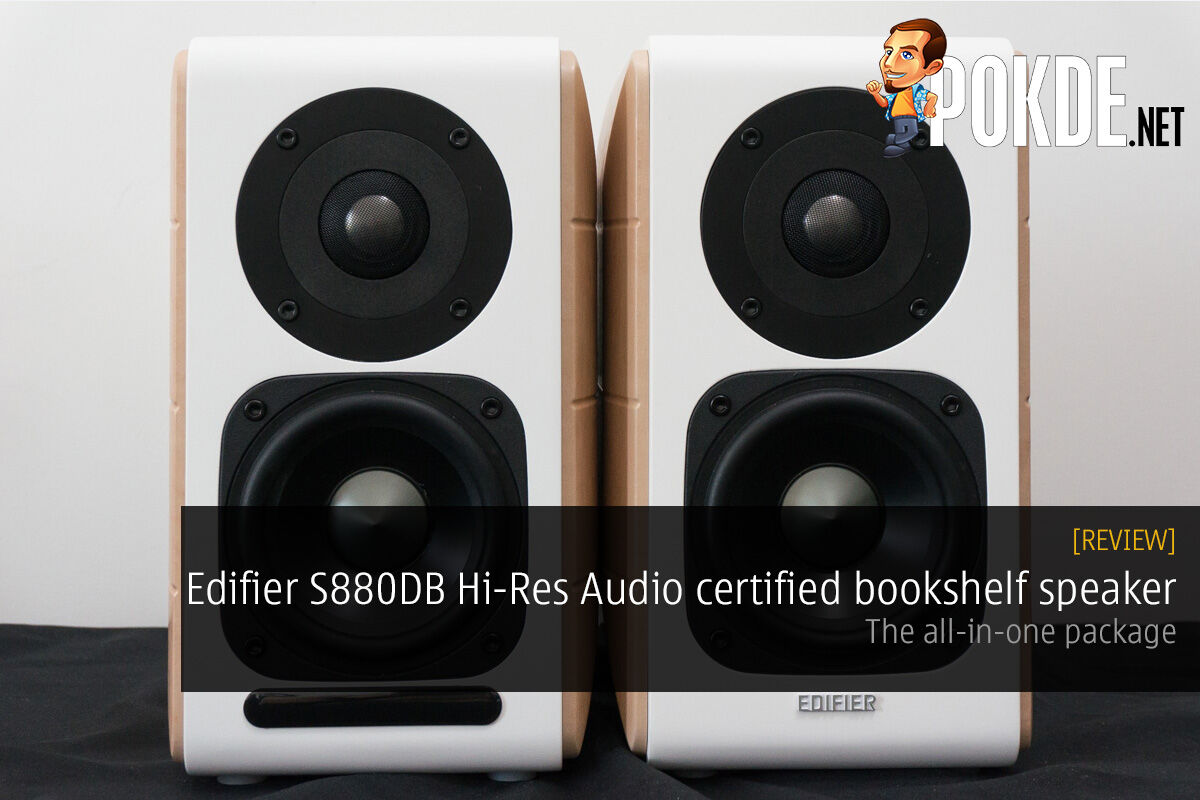 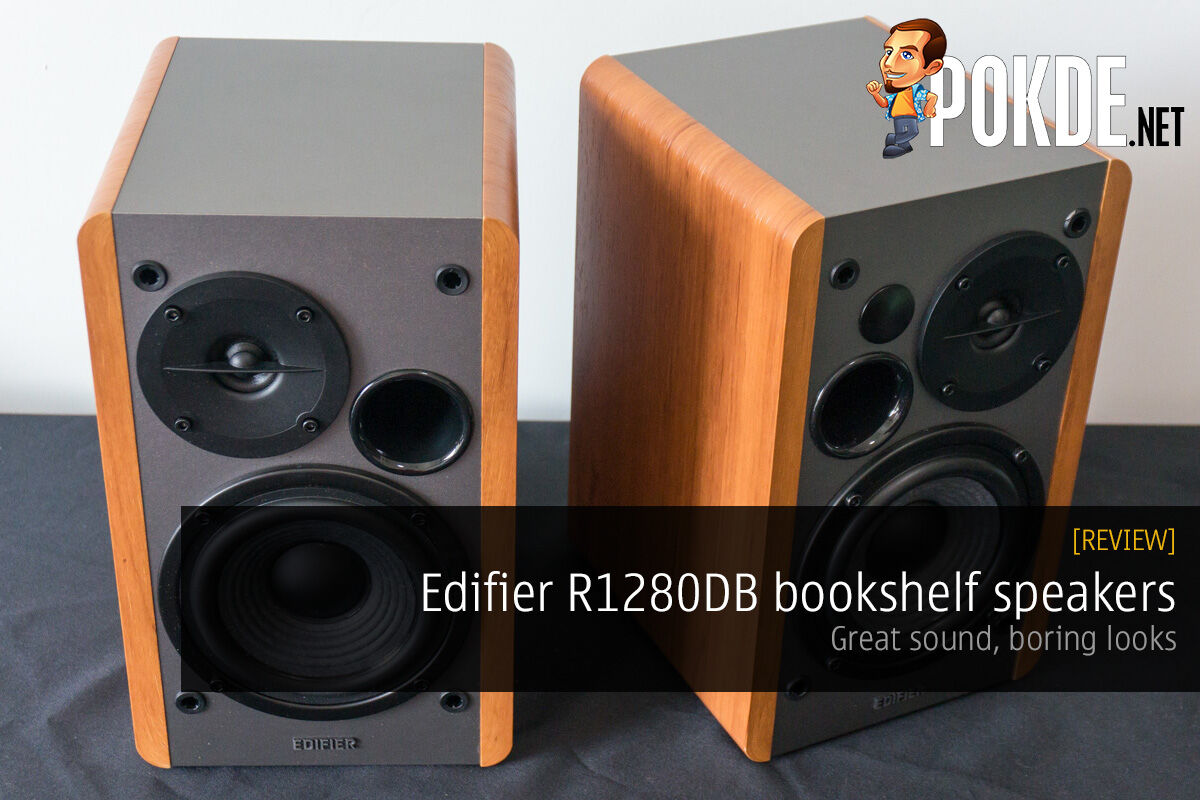 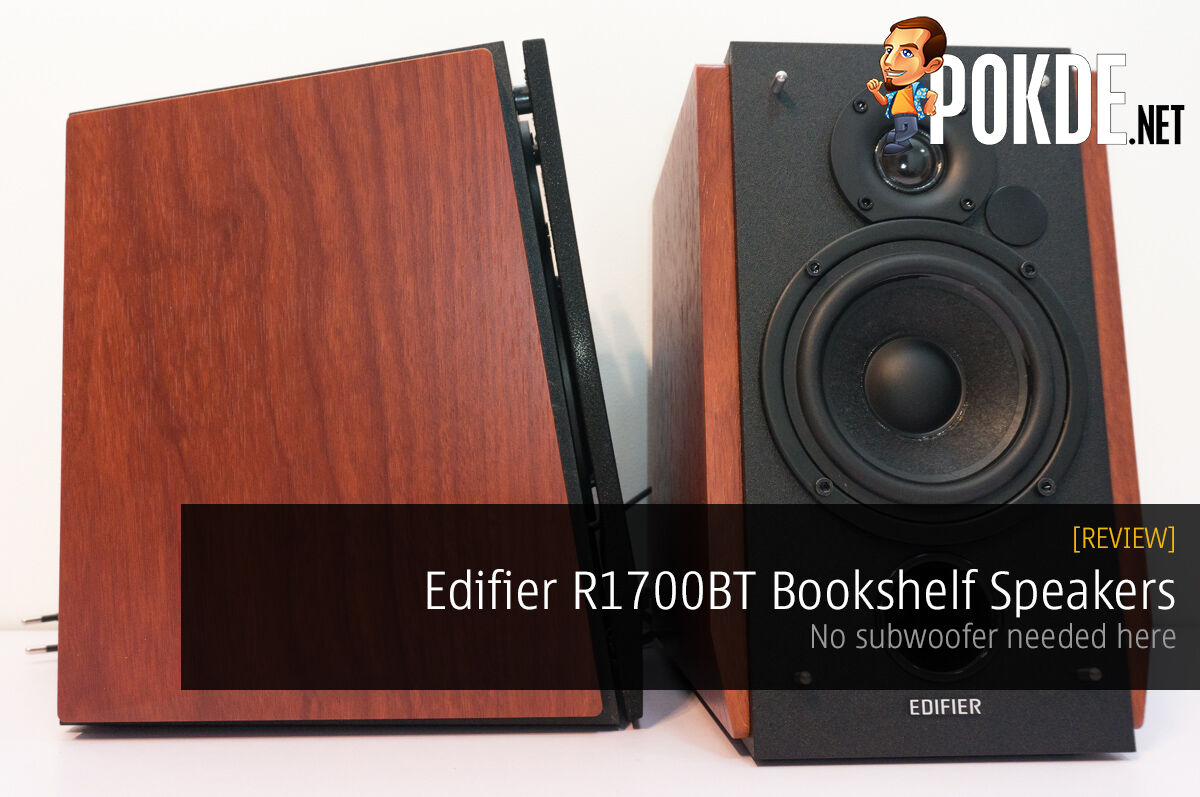 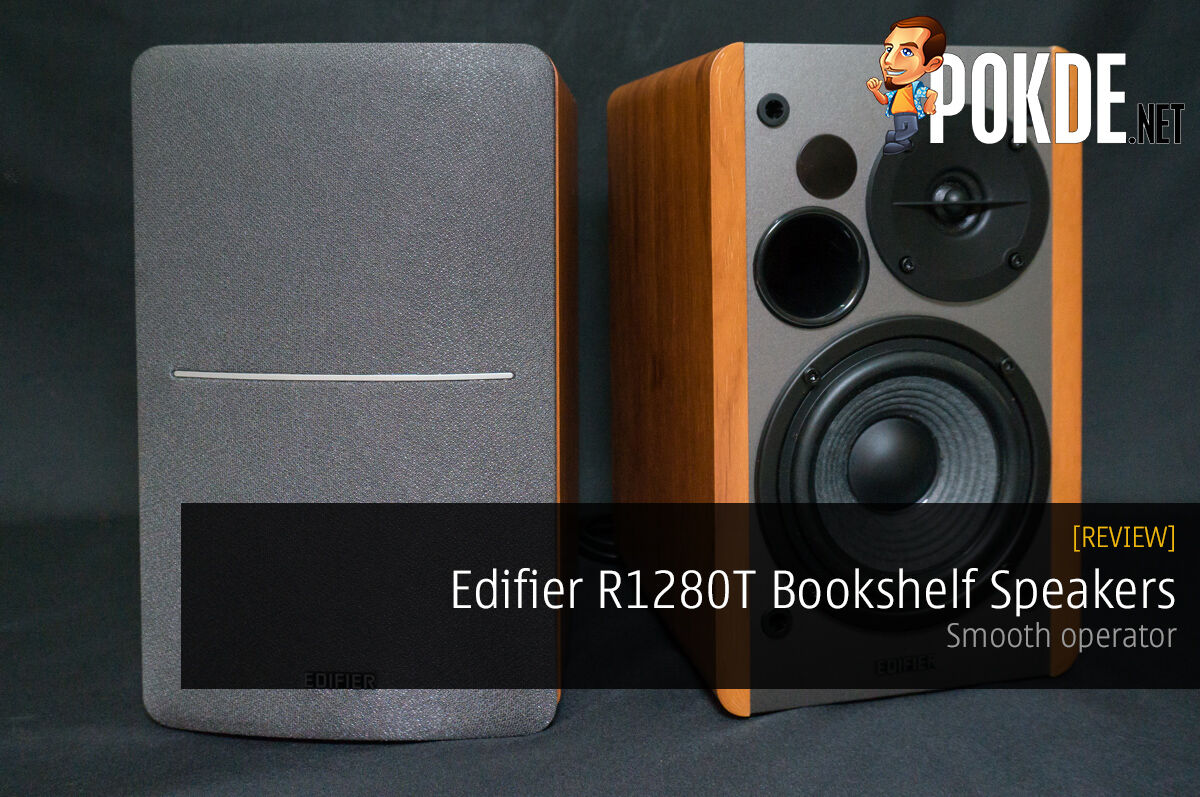 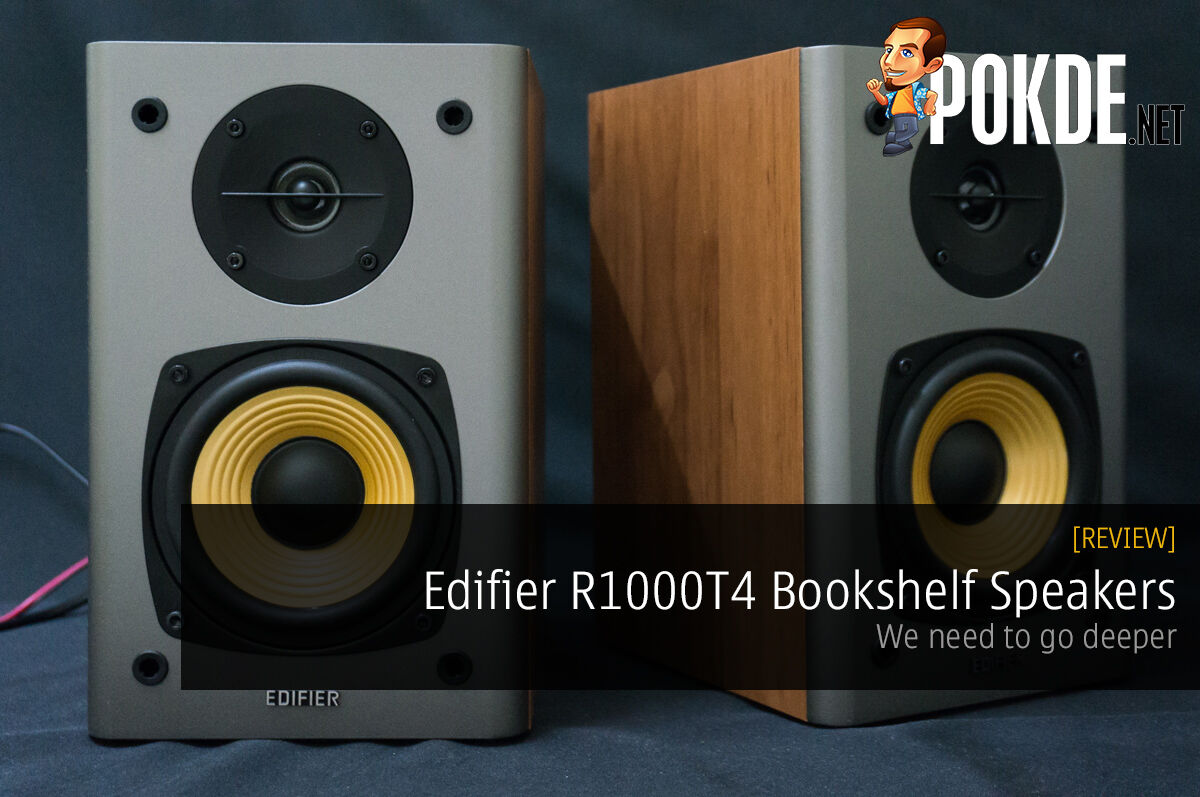