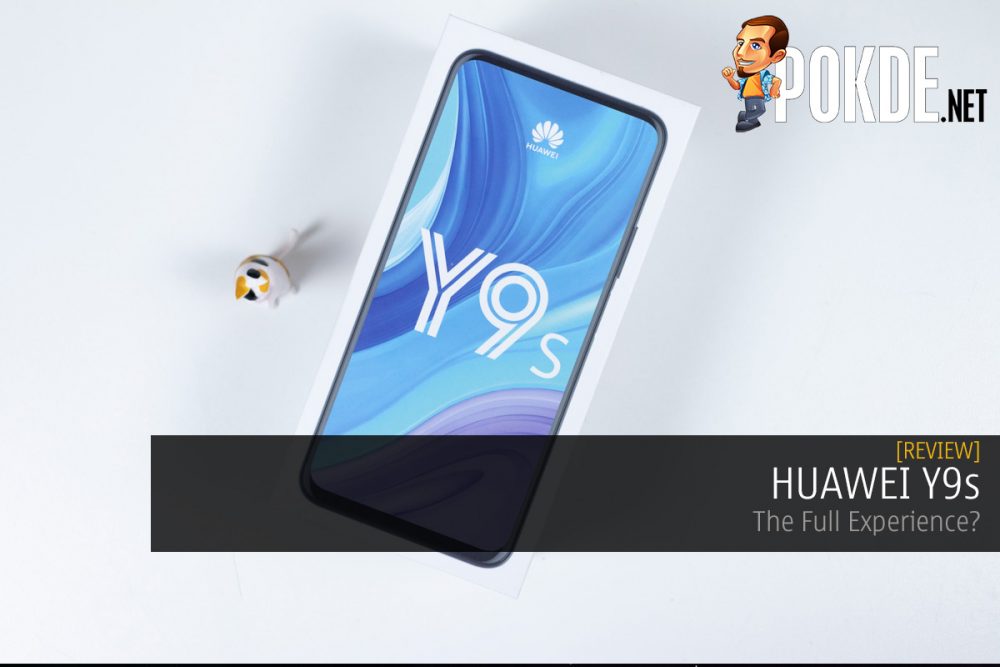 Big display, 48MP and a popup camera combo? Is it the perfect recipe for success for the HUAWEI Y9s?

With a hardware upgrade, it would've make the HUAWEI Y9s a true contender in the mid-range segment.

The HUAWEI Y9 family is HUAWEI’s answer to the many budget mid-range offerings from almost every other brand in the market. The HUAWEI Y9 (2019) was okay, the HUAWEI Y9 Prime was a bit lackluster, but today we will be looking at the latest addition to the family, the HUAWEI Y9s which comes with a heavily upgraded camera. There are now 48 million pixels to play with. Interested?

The unit that we’ve received is the China version, so it’s a bit different to the ones that you will get here in Malaysia. Here are the things that are inside:

It’s rather uncommon to find free earphones included with smartphones. These might not be the best you have seen, but at least HUAWEI included them in the box.

On the front, the HUAWEI Y9s sports a big 6.59″ FullView display and takes away the need for a notch by implementing a pop up camera.

You’ll find the power button/fingerprint sensor located at the right hand side as well as the phone’s volume rockers. A side-mounted fingerprint scanner is rather uncommon in this price range, so this is nice to see.

At the bottom, we find a USB-C port which makes charging a bit more convenient. There’s also a much-missed 3.5mm jack.

Over at the back, we see that HUAWEI has gone with plastic instead of glass. Unfortunately, we received the Midnight Black color variant instead of the decidedly prettier Breathing Crystal. There’s some frosting effect which improves the aesthetics here just so that it doesn’t look too bland.

The Kirin 710F is definitely showing its age in Antutu v8, with the more recent chipsets serving up a much more impressive showing. With that said, it’s still a decent chipset in the lower mid-range market.

3DMark tests the GPU performance, and this is where we see most Kirin chipsets falter. The HUAWEI Y9s is no different.

CPU performance is notably more impressive, keeping up well with the more recent chipsets too.

The combination of a weak CPU and GPU put the HUAWEI Y9s in the bottom rung, with it coming in below the HONOR 9X too.

Battery life is another area where the HUAWEI Y9s comes behind the HONOR 9X for no reason. With everything similar, the difference in results is pretty weird.

As for my real life usage, the battery actually performed a lot better than the benchmark. You can see that I started from 1am till 9pm that I still had 61% of juice left on the device. Usage includes your usual social media apps such as Facebook, WhatsApp, Instagram, and Messenger. In a 30 minute charging period, I was able to charge from 32% to 41%, which I think is definitely something that could be improved upon.

As for gaming, there’s not much that you can tweak on Call of Duty Mobile in terms of graphics, due to the HUAWEI Y9s’ limited GPU performance. Despite that, you can rest assured that the temperature of the phone isn’t anything to worry about as it barely warmed up over 30 minutes of gameplay.

I’m not going to lie, I felt refreshed when I looked at the phone? The reason? Well it’s been quite some time since I’ve handled one that doesn’t come with a notch (even waterdrop counts!).

The HUAWEI Y9s feels good in my hands. Though some may find a side fingerprint scanner uncomfortable, the one here feels natural within my finger’s reach, allowing me to unlock the phone without performing any finger gymnastics. This is probably the main reason to pick the HUAWEI Y9s over offerings from the other brands.

Thanks to the big 6.59″ viewing area and no notch getting in the way, you’ll definitely enjoy your content even more. Colors aren’t as vivid as what you would get from an OLED display, but it’s serviceable.

With the phone’s EMUI 9.1, you won’t be missing out any of today’s features such as navigation gestures and video ringtones, to name a few.

The camera UI is also similar to other HUAWEI and HONOR smartphones. There’s updates as well such as the Super Night Mode, where the camera will detect low light background and enable Night Mode itself. All you need to do is turn on the AI feature.

The HUAWEI Y9s’ low light shots can look soft with an overly aggressive noise reduction algorithm. However you can slightly improve the quality with its Night Mode, bringing it closer to the competition. Even in good lighting, there’s not much to shout about here but hey, the results are still more than acceptable for these social media postings. Details are decent but we can see it fall behind with its rather limited dynamic range.

HUAWEI is asking for RM999 for the HUAWEI Y9s. That may seem slightly on the higher side of things but they are offering a free HUAWEI Band 4 to go along with the device to sweeten the deal. It’s battery life is surprisingly good too, which will make for a great secondary device. Having a notch-less display is cool, as is the side-mounted fingerprint scanner, both being somewhat of a rarity in this price segment. The only downer is its chipset and its camera performance, which are quite weak compared to the current crop of mid-range devices.

Shout out to HUAWEI Malaysia for providing us the HUAWEI Y9s for review.