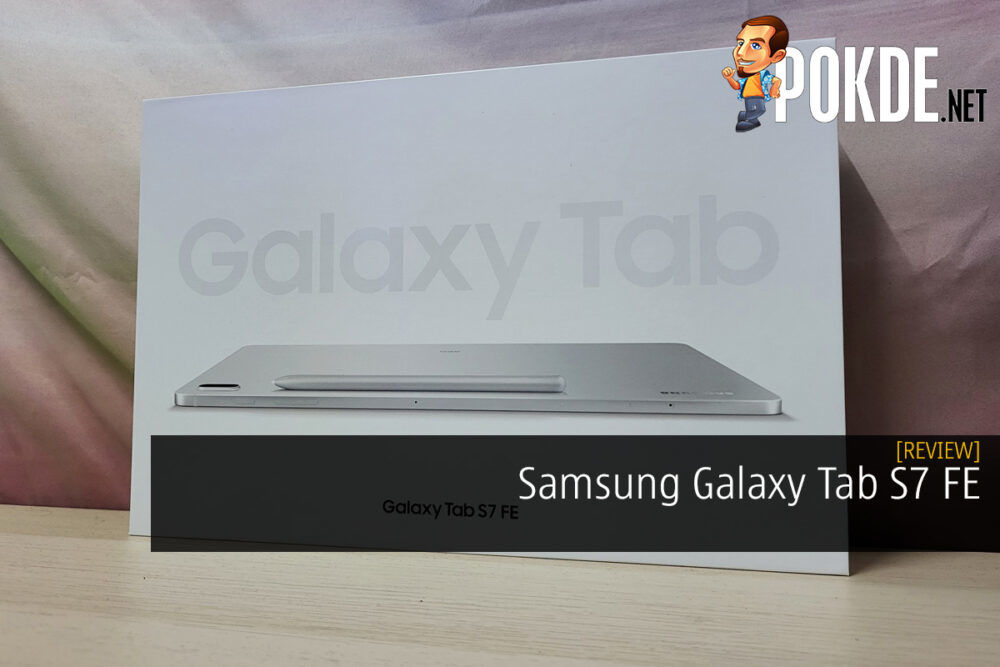 The Samsung Galaxy Tab S7 FE essentially brings the good experience from the Plus variant in a more affordable package, complete with S Pen support. Is it worth your money? Let's find out.

- No 3.5mm headphone jack
- Rear does still get fingerprint smudges
- No high / adaptive refresh rate option
- The move from Super AMOLED to TFT is a bit of a letdown

The Samsung Galaxy Tab S7 FE is basically the more affordable version of the Plus variant, losing out on some of the premium features but still giving you a great multimedia tablet experience. 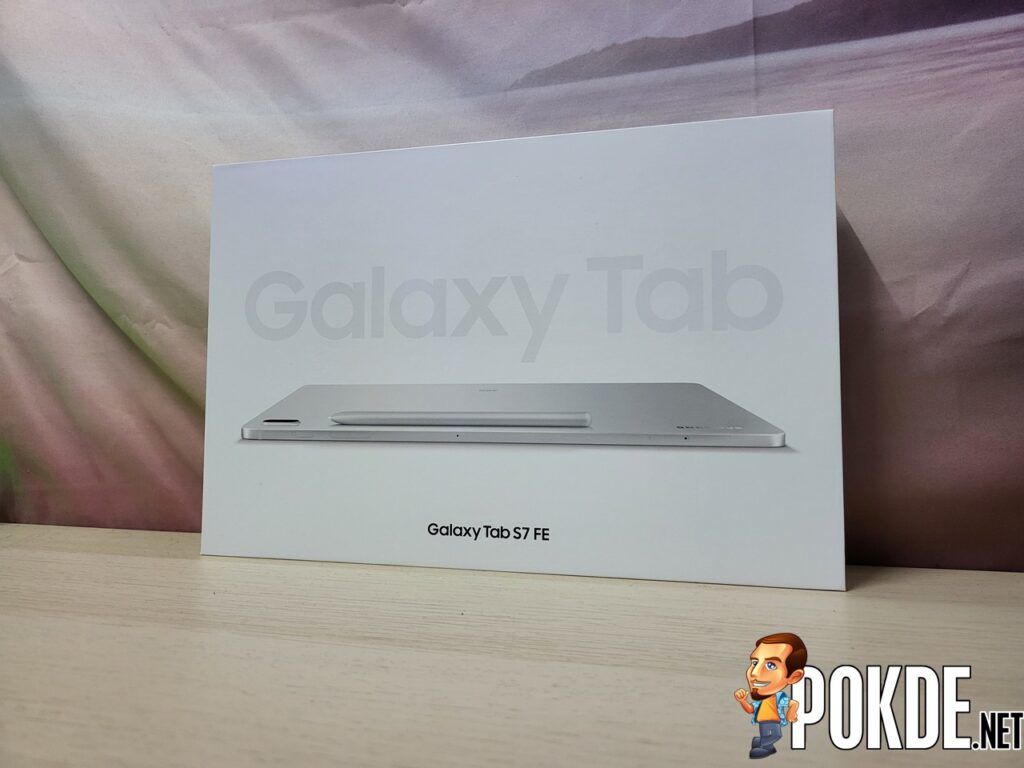 Unlike most of their products which comes in a black box, the Samsung Galaxy Tab S7 FE comes in a white box instead. The color most likely resonates with the FE branding, as the Galaxy S20 FE also came in a white box. Inside it, you can find the following items: 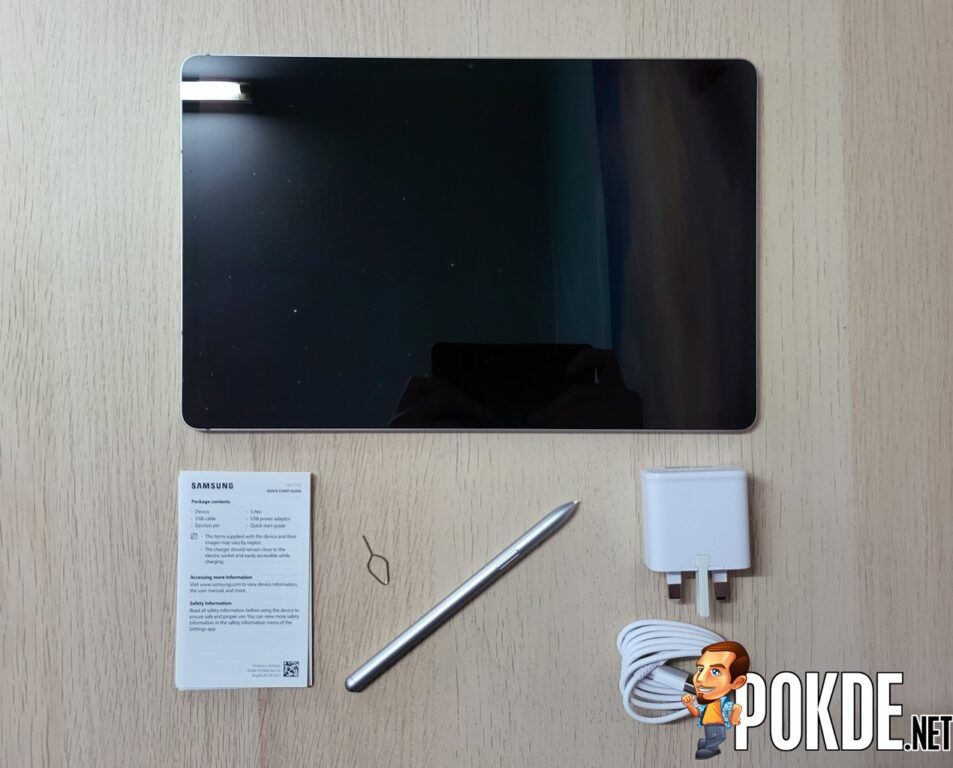 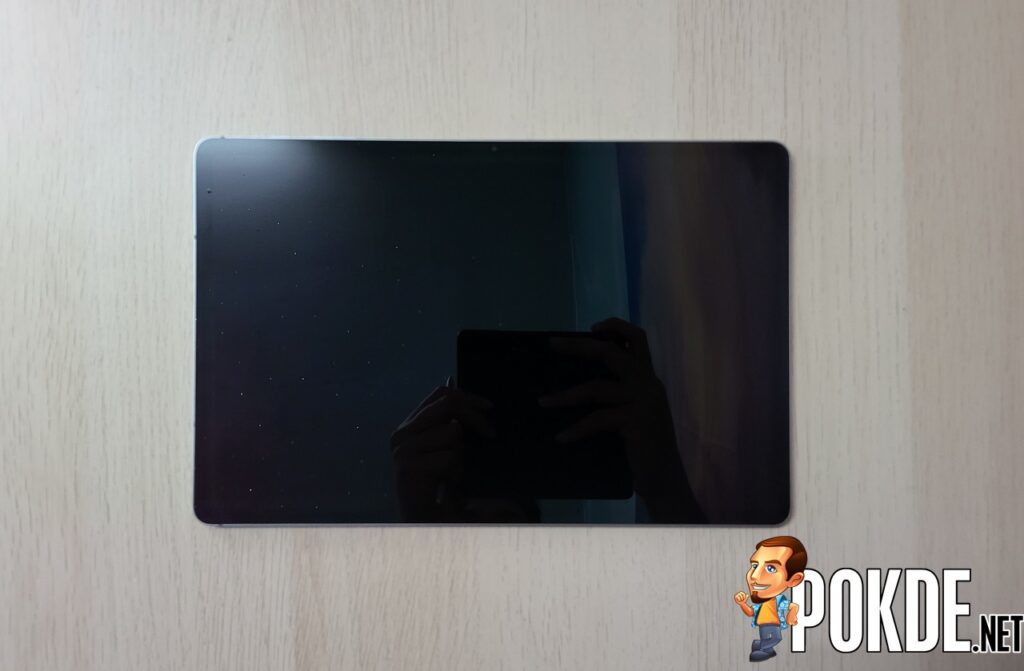 Starting from the front, the Samsung Galaxy Tab S7 FE uses a 13.4-inch TFT display with a 16:10 aspect ratio and relatively thick bezels given today’s day and age. Because of that, there is no notch for the selfie camera, which is a 5MP shooter on the side as it’s meant to be held / placed horizontally for video calls. In case you’re wondering, there is no high refresh rate option here. 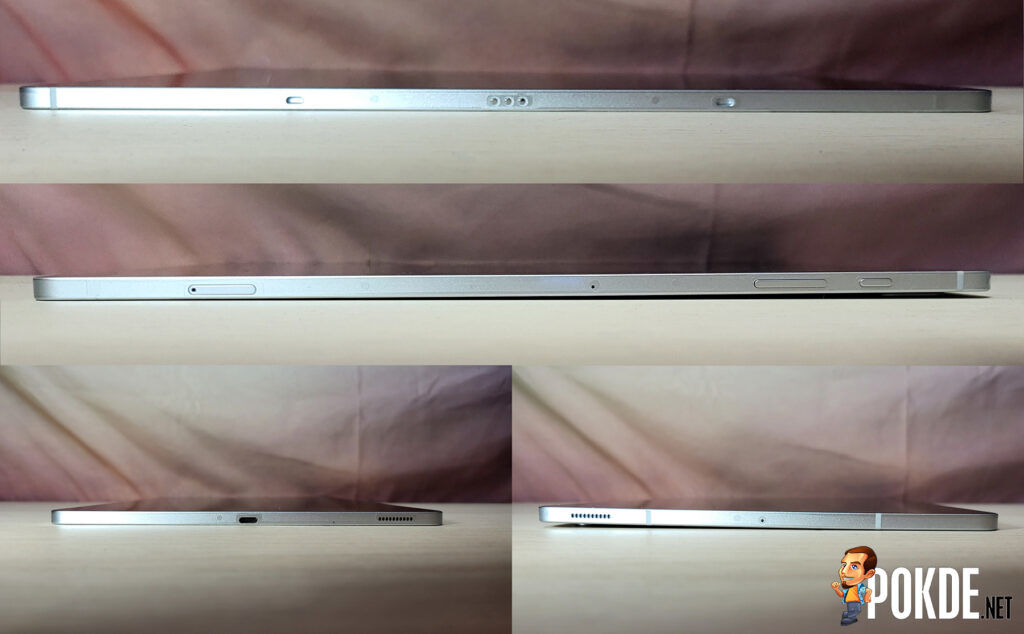 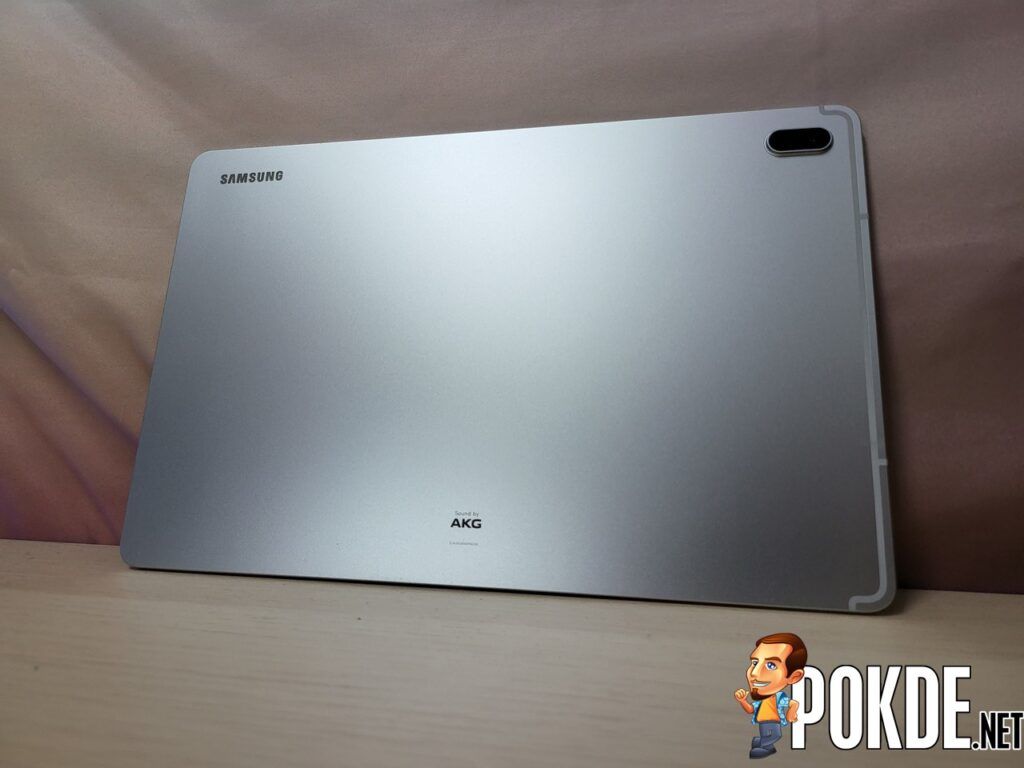 For our review unit, we received the Mystic Silver color variant. It has a metallic back with a matte finish, though it oddly does smudge a bit for this type of finish. You can also see its camera system here as well. It looks and feels very similar to the Galaxy Tab S7+, having a more premium build quality. You can stick the included S Pen between the camera modules and the Samsung logo magnetically.

The Samsung Galaxy Tab S7 FE isn’t a compact tablet by any means as it’s relatively large. However, it’s still very light and easy to bring around, especially if you need a laptop replacement or a secondary device to complement your phone on the go. It certainly looks very similar to the Galaxy Tab S7 Plus, with a similar build quality, which gives it a more premium feel. 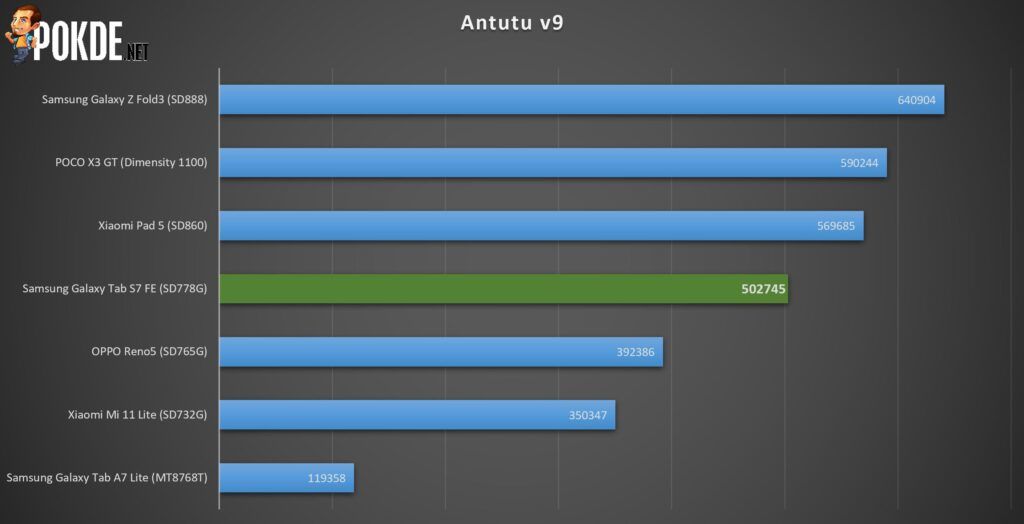 Starting off the benchmark suite with Antutu v9, the Samsung Galaxy Tab S7 FE managed to perform admirably. It’s not far off from typical flagship SoCs but is definitely stronger than entry-level and plenty of midrange chips. This gives us an idea that it’s within the upper-midrange area in terms of performance. 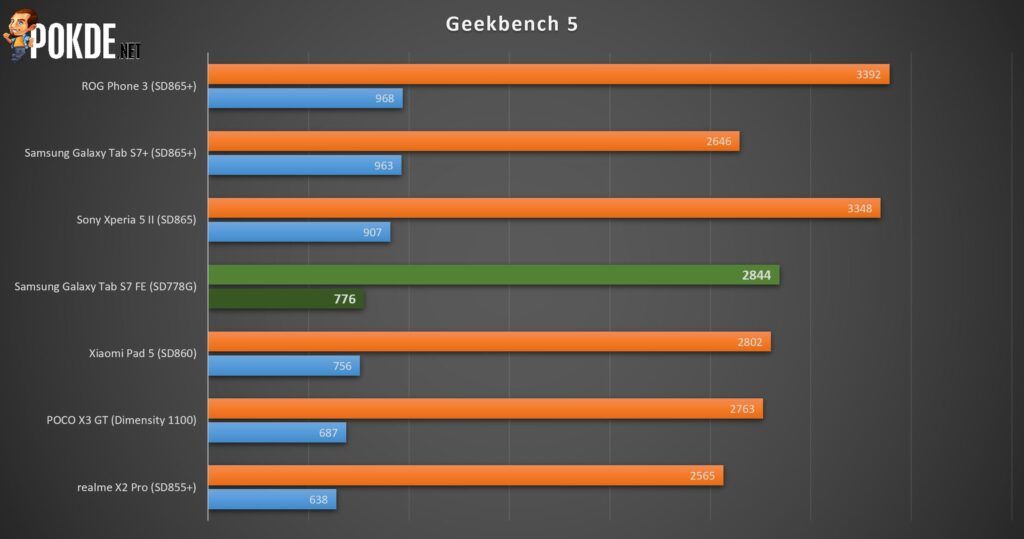 It’s particularly interesting in Geekbench 5, as it managed to outperform a Snapdragon 855+ device, and even beat a Snapdragon 865+ device in multi-core performance. This tablet is shaping up to be better than expected. 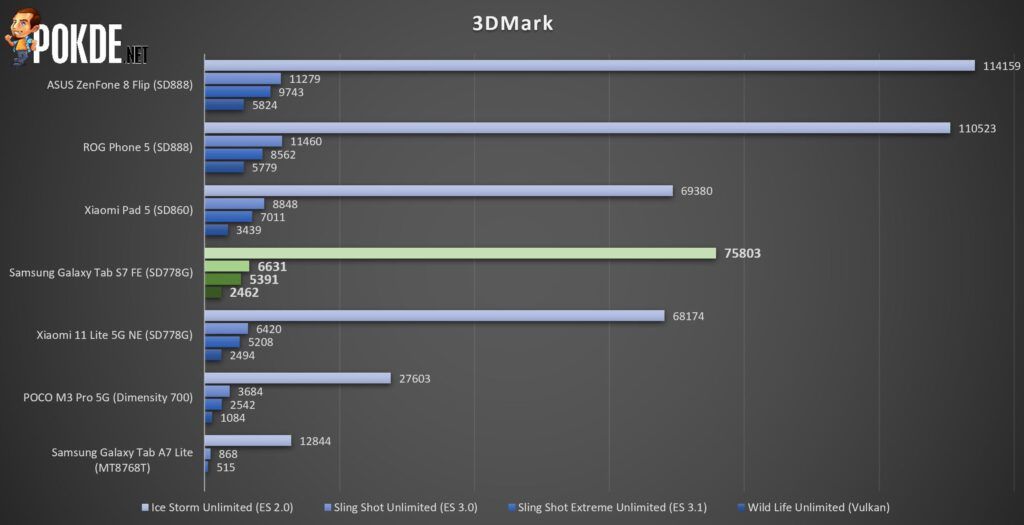 As for 3DMark, the Samsung Galaxy Tab S7 FE did manage to perform well enough given that it’s powered by the Snapdragon 778G. However, we can see here where the it loses out to device running flagship SoCs. You can still get a decent experience playing mobile games on it, that much I’m not worried about. 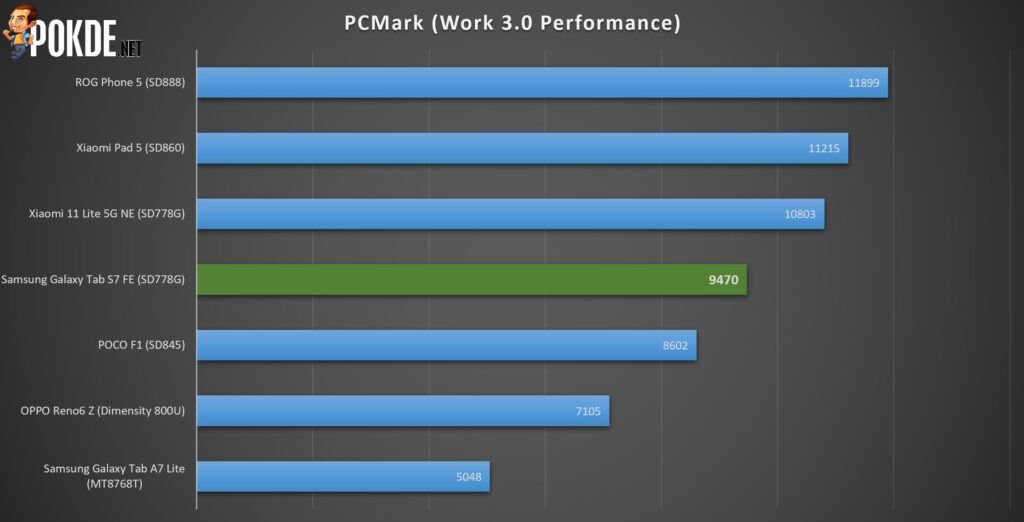 Moving on to PCMark, the Samsung Galaxy Tab S7 FE performed pretty well with a score of 9,470. It came close to breaking the 10,000 mark and managed to outperform an old flagship SoC in the Snapdragon 845. Needless to say, it did lose out to the newer flagship chips, but we expected as much given the price point and specifications. 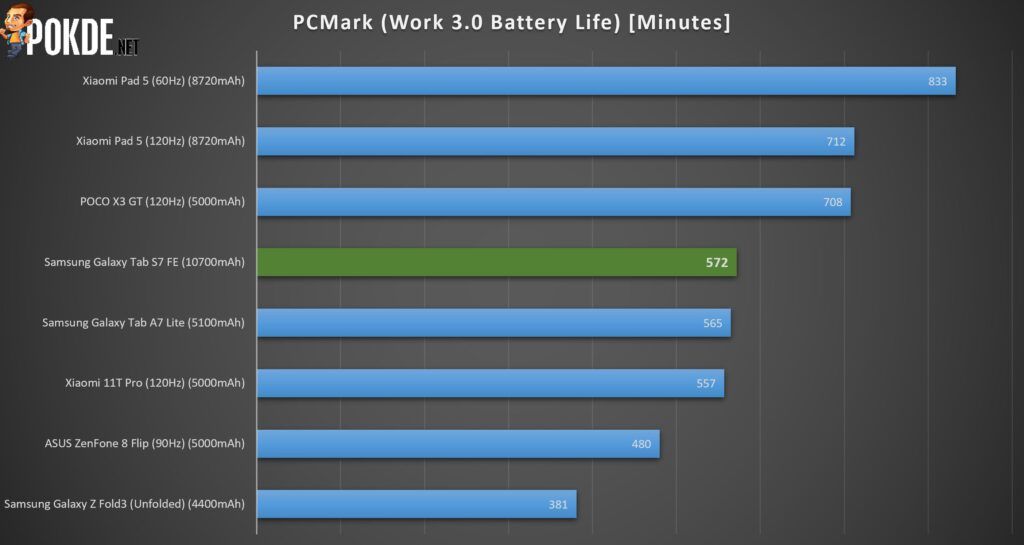 Lastly on PCMark Work 3.0’s battery endurance test, the Samsung Galaxy Tab S7 FE managed to last 9 hours and 32 minutes (572 minutes). It lasted noticeably longer than the Galaxy Tab S7+, but it’s barely any different from the Galaxy Tab A7 Lite. We can’t compare it to smartphone given the difference in display size, but we figured it’s still worth putting to give you a better idea of what to expect.

If you need a stronger Android tablet, check out our review of the Samsung Galaxy Tab S7+ by clicking right here. 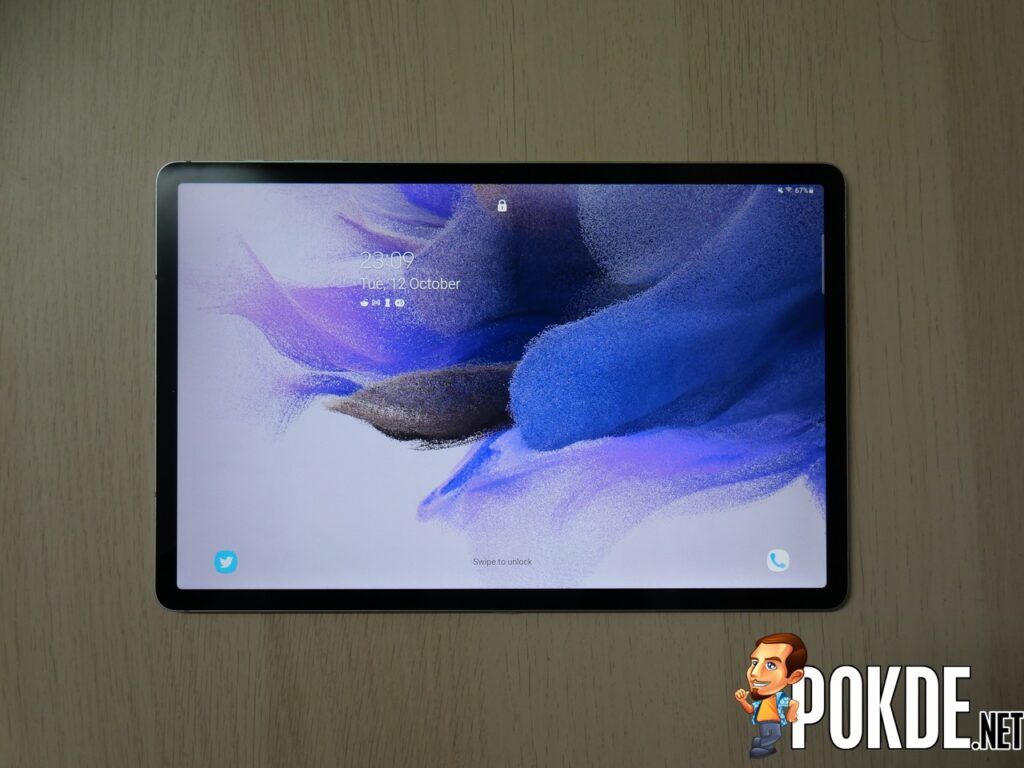 The Samsung Galaxy Tab S7 FE is the company’s first ever Fan Edition tablet. If you’re not familiar with the branding, Samsung would take an existing flagship product and make it more affordable. There are two configurations to this tablet, a Wi-Fi only Snapdragon 778G and a 5G-capable Snapdragon 750G. As for memory, you can have either 4GB RAM with 64GB storage or 6GB RAM with 128GB storage, with ours being the latter.

As for display, this tablet uses a 12.4-inch TFT display. Given its WQXGA resolution (1600 x 2560), it has an aspect ratio of 16:10 instead of the standard 16:9 so you’ll have a little bit more screen real estate so you can see more. While the colors aren’t as punchy as the plus variant, it still looks great. The screen is a little reflective but it’s not too bad, but keep it in mind in case you’re using it outdoors. One downside here is that there is no high / adaptive refresh rate option, so you will be stuck in 60Hz.

For those of you looking for constant internet connection, there is a variant that will let you use the nanoSIM slot for 4G and 5G mobile data connections. However, most major telcos around the world are still working on 5G connectivity, you’re gonna be relying on 4G LTE for the most part. When 5G support is more widely available, you will be able to make use of it with this tablet. Apart from that, there’s also a microSD slot if you want to expand the storage up to 1TB.

The Samsung Galaxy Tab S7 FE has a stereo speaker setup; one on top and one at the bottom. While it typically works great, I personally feel that it would be better to have dual front-facing speakers for improved immersion. If you want to use headphones / earphones, keep in mind that it doesn’t have an audio jack. You will need to use either a USB-C to 3.5mm adapter or Bluetooth.

The Samsung Galaxy Tab S7 FE is running Android 11  with One UI 3.1.1 on top of it. It gives the device a rather clean look and is generally easy to navigate through everything, similar to its Galaxy smartphone counterpart. It’s user-friendly enough that most people should not have trouble using it. I personally use it with Dark Mode as it’s easier on my eyes and I can save battery life. 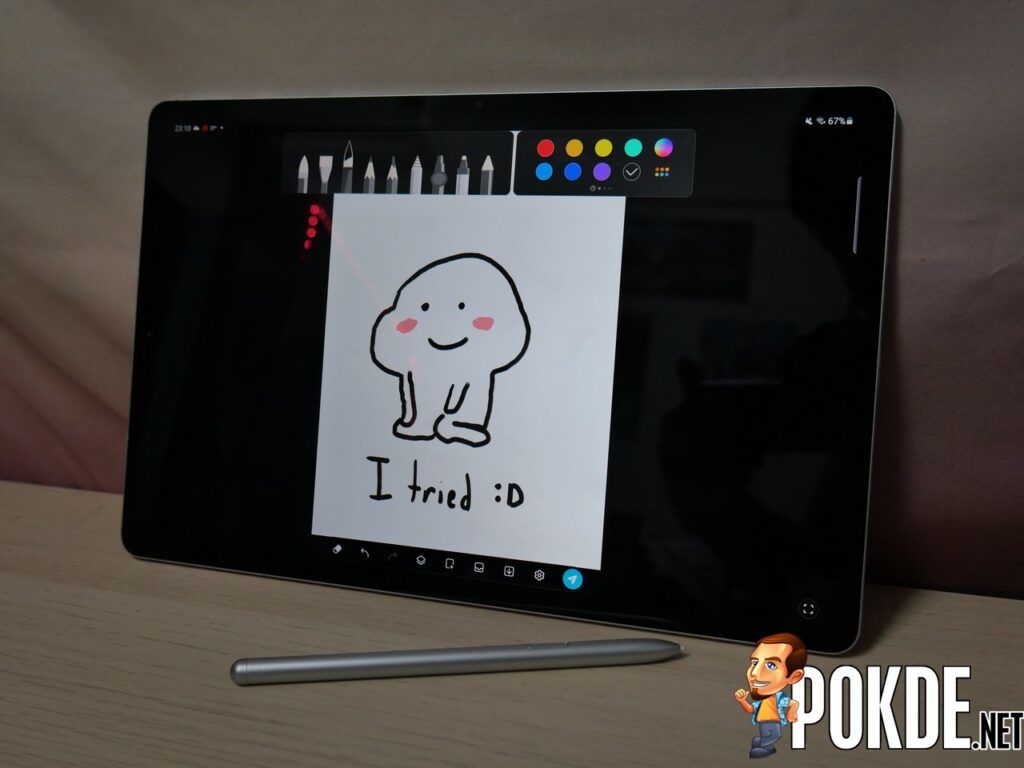 As for the S Pen, it feels just as great as on the Galaxy Tab S7+ and it’s still easy to use. It definitely feels better than its Galaxy Note counterpart given the size, and it still functions exactly the same. It supports 4,096 pressure levels and can be used to draw, take down notes, and make presentations. The S Pen button can be remapped so it can do more than just summoning Bixby.

The method of magnetically attaching the S Pen to the back of the tablet for charging and pairing is a bit weird for me, but I can understand why it needs to be done this way as there’s no way to make a built-in slot for it given the size. 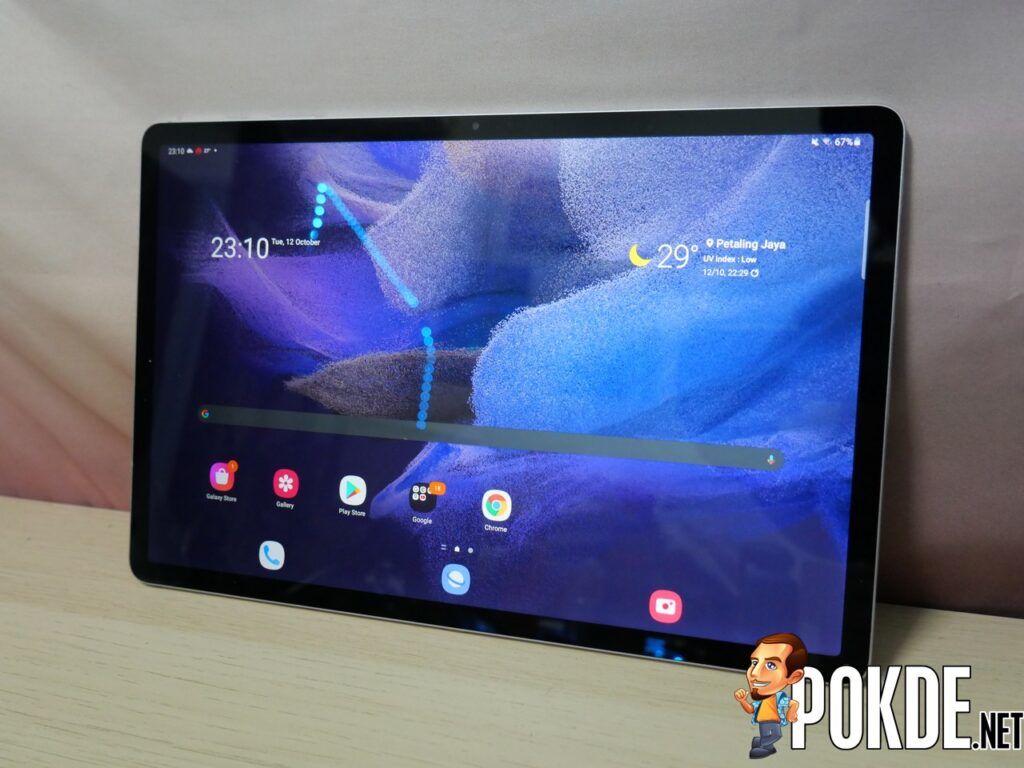 The Samsung Galaxy Tab S7 FE is basically the more affordable version of the Plus variant, losing out on some of the premium features but still giving you a great multimedia tablet experience. You get a good, large display, comes with the S Pen, stereo speaker setup, reliable performance, solid build quality, user-friendly UI, and the option of having 5G support.

However, it does have similar drawbacks to the Plus variant as well as it doesn’t come with a 3.5mm headphone jack, and the rear does still get fingerprint smudges despite the finish. On top of that, it’s a shame that it doesn’t have a high refresh rate option, and the move from Super AMOLED to TFT is a bit of a letdown. Regardless, being priced from RM1,899 to RM2,199, it’s still a solid tablet nonetheless.

At the end of our Samsung Galaxy Tab S7 FE review, we award this tablet with our Silver Pokdeward.

Big thanks to Samsung Malaysia for sending us this tablet for the purpose of this review.

Aiman Maulana
Jack of all trades, master of none, but oftentimes better than a master of one. YouTuber, video editor, tech head, and a wizard of gaming. What's up? :)
Pokde Recommends
AndroidAndroid 11bloggadgetGalaxy TabGalaxy Tab S7 FEGalaxy Tab S7+MalaysiaGadgetReviewTablet
MORE
Read More
338