WWE 2K19 Review: Needs to Dial Down on Realism 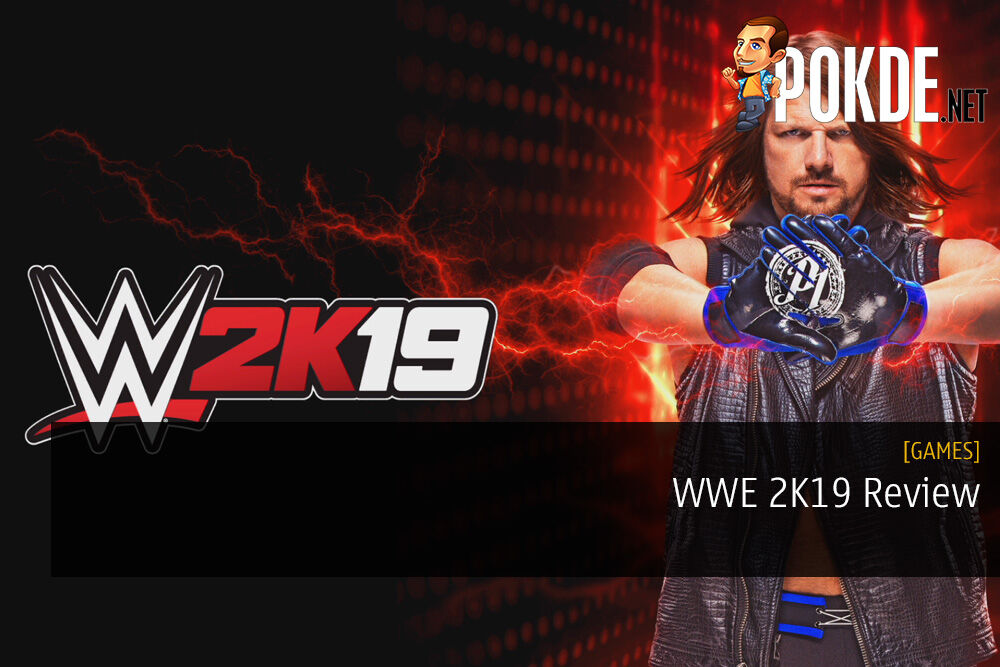 + A huge roster of playable characters.
+ An all-new original story mode featuring your own character creation.
+ You get to relive some of WWE’s most memorable moments from recent times.
+ A fun multiplayer game that many people can enjoy.
+ Skill tree makes growing your custom characters very enjoyable.

- Limited counters hinder gameplay potential.
- Gameplay feels rather sluggish.
- Loot box-style system locks too much content for custom characters.
- Some wrestlers do not sound like their actual person.

WWE 2K19 is a fun game to play with friends but definitely not one for you to play alone after finishing MyCareer mode. They should focus a lot less on realism in the next iteration of the game. 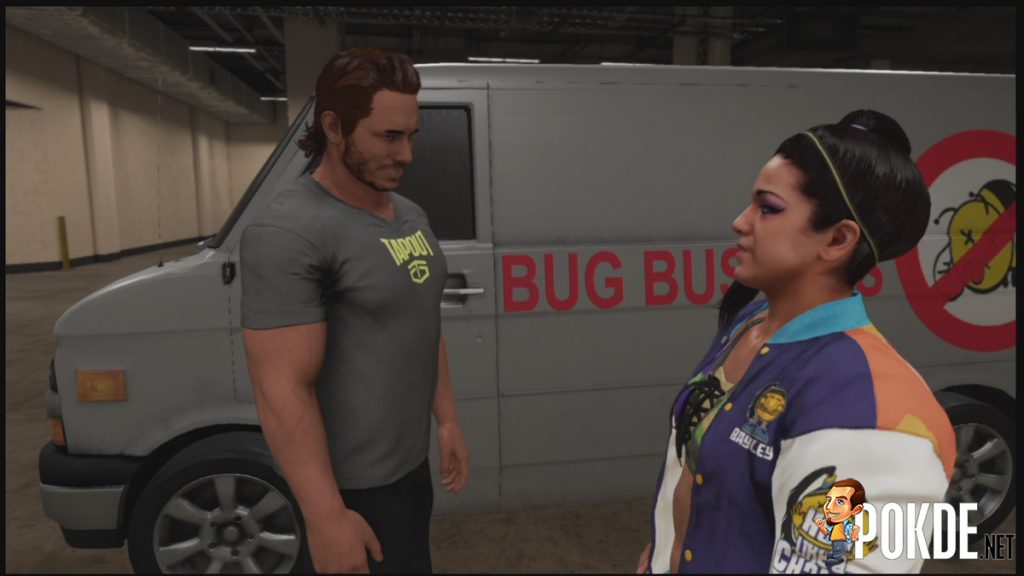 In essence, WWE 2K19 is a professional wrestling / sports entertainment simulator where you can play as WWE Superstars to fight it out against other players in a variety of matches. It is the latest entry in the WWE 2K series and it features updated mechanics as well as a huge roster of playable characters which are available immediately as well as in DLC form.

For this review, we are playing the WWE 2K19 Digital Deluxe Edition for the PlayStation 4. It comes with the Season Pass, MyPlayer Kickstart boost (bonus points to upgrade your custom character), and the Accelerator add-on (unlocks all the WWE Superstars and Legends, including alternate attires).

There are 4 notable game modes in WWE 2K19. The first is a 2K Showcase Mode featuring the illustrious career of Daniel Bryan from his start in WWE, to his retirement, and to his surprising return. Then there’s the MyPlayer Tower Mode, where you use your custom character to participate in a myriad of challenges. Third is the WWE Towers, which you can play anytime to progress or in gauntlet fashion where you need to complete it in a single session. 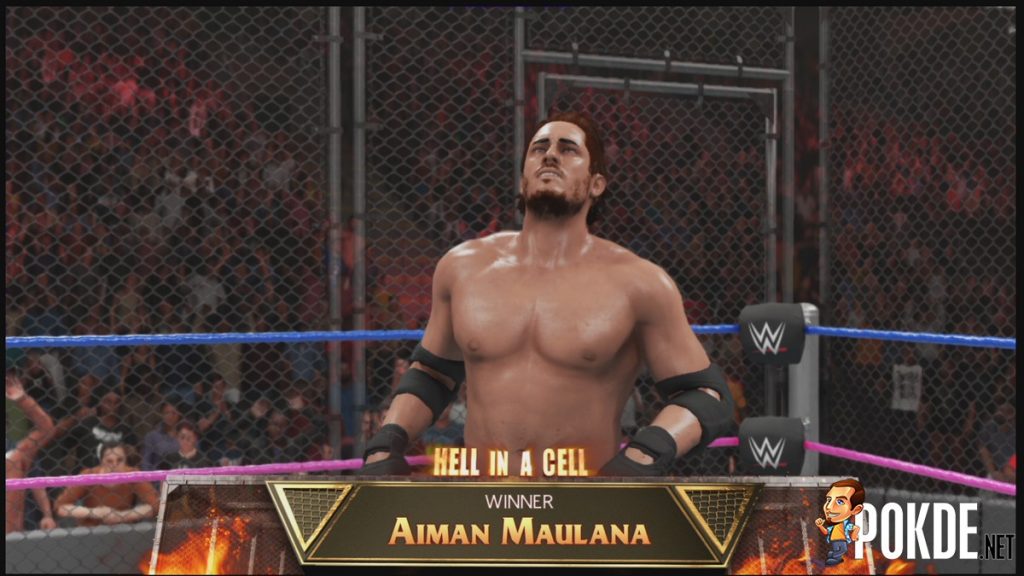 Lastly, there’s the MyCareer Mode, where players will create their own custom character and go through a journey as a professional wrestler. The player will begin in the independent circuit and slowly make their way to top of the WWE by being the main roster champion at WWE’s most coveted pay-per-view event, Wrestlemania. 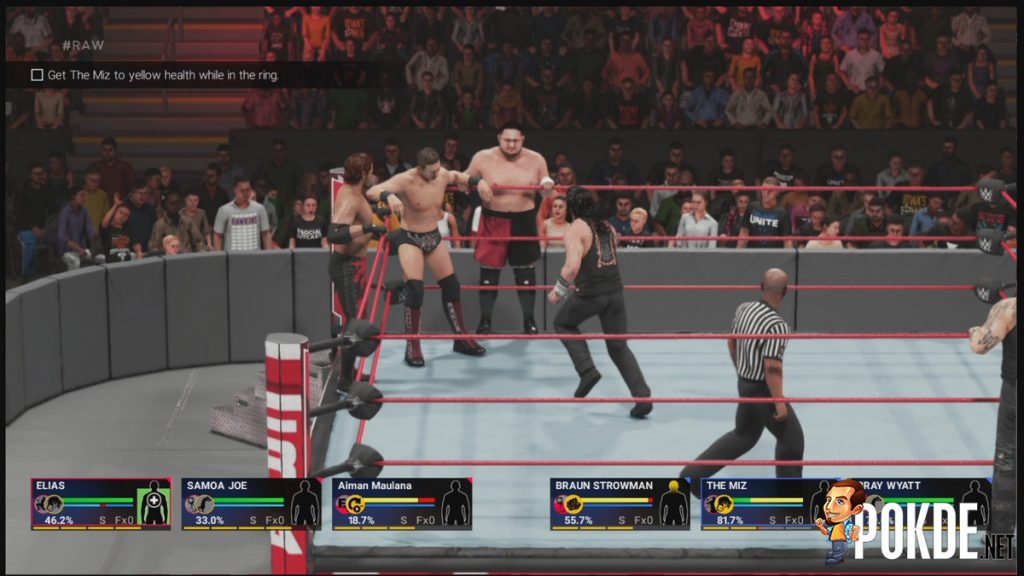 The very essence of the game is in combat. Playing as your favourite WWE Superstars or your own created character, you will be fighting against other players in a wide variety of matches. For most parts, the idea is very simple; you have to wear down your opponents enough so your most powerful move will be effective enough to either pin them or make them give up via submission.

To know how worn down your opponent is, there are two indicators for that. The body icon, which will change colour from black to dark red to indicate how badly damaged a particular limb is, and the health bar. Every wrestler will have their own set of moves, and it will be different depending on the situation. For example, grappling a standing opponent will have different set of move options compared to when they are on the ground. 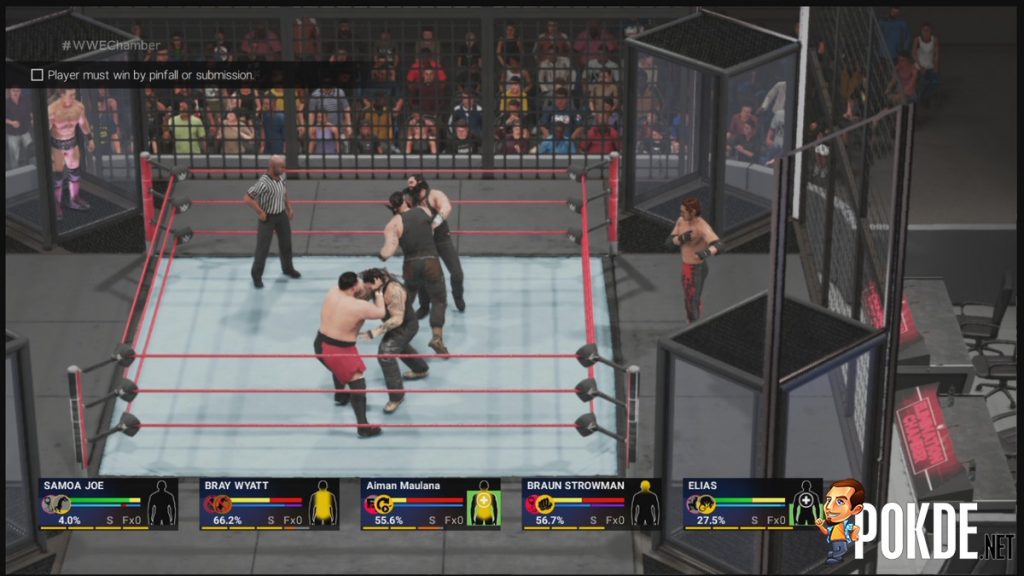 The more attacks you dish out, the lower the health bar will be but unlike fighting games, you can’t exactly bring their health to nil to end the match. When their health is at its lowest and you’ve targeted a particular limb until it’s at least orange, a finishing move will almost guarantee a win. If you’re pinning an opponent, you need not do anything but if you’re on the receiving end, you will have three chances to time the gauge and stop at the highlighted section or risk failure.

This is different from submission moves, where the attacker will simply need to overlap the receiver’s area until the circle is fully red while the receiver will need to avoid it long enough for the circle to be filled with blue, in which a counterattack will happen automatically. For most parts, this does normal for WWE games in the past. 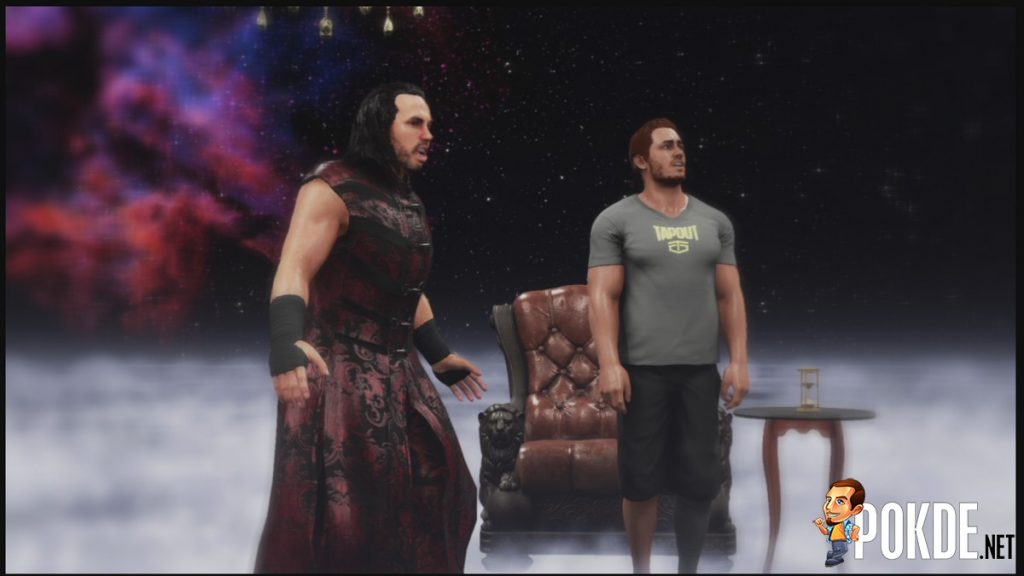 However, there are two particular mechanics that make gameplay feel rather awkward and slow-paced. The first is the stamina meter, which has a total of 3 levels and you can only recover as much as the current stamina level that you are on. Stamina will be expended when you’re attacking, running, and when you’re on the receiving end of an attack at times. When your stamina is too low, the character will be very sluggish and have trouble executing certain actions.

The other mechanics is the counter gauge. When you’re on the receiving end of attacks, you have the chance to counter them by timing your button press accordingly (R2 on the PS4). However, the amount of counters you can do will be limited by how many counter levels you have, which regenerates over time. 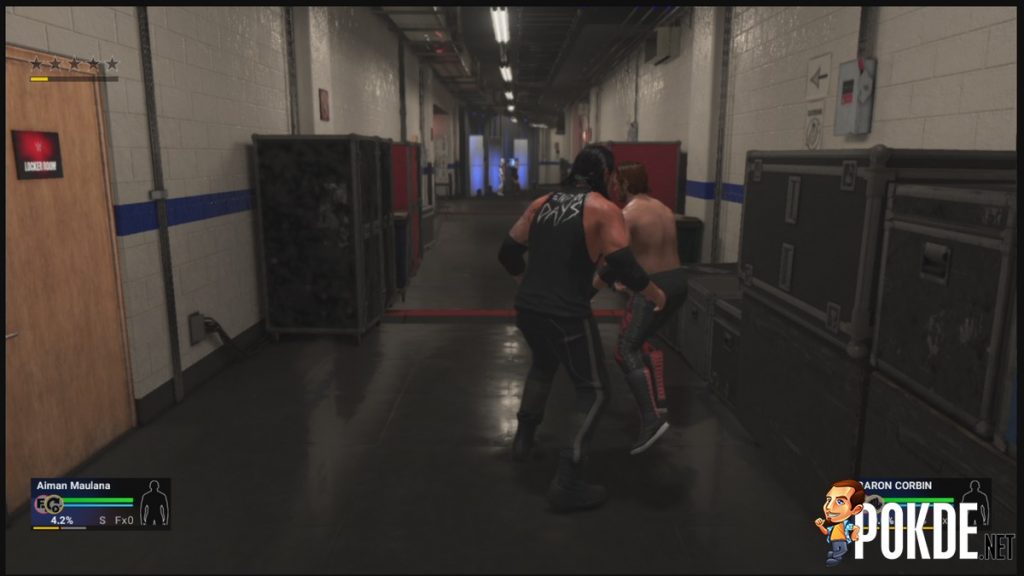 This means that if you run out of counters, you will have no choice but to freely accept everything that’s coming to you and this can be rather unforgiving with A.I. opponents. Not to mention, your custom character will only have two counter bars at a time early on, and it can be very frustrating until you at least grow strong enough to have three.

While both of these make the game feel more realistic, it also makes the game harder to enjoy, especially when you see consistent, fast-paced action on WWE programming. 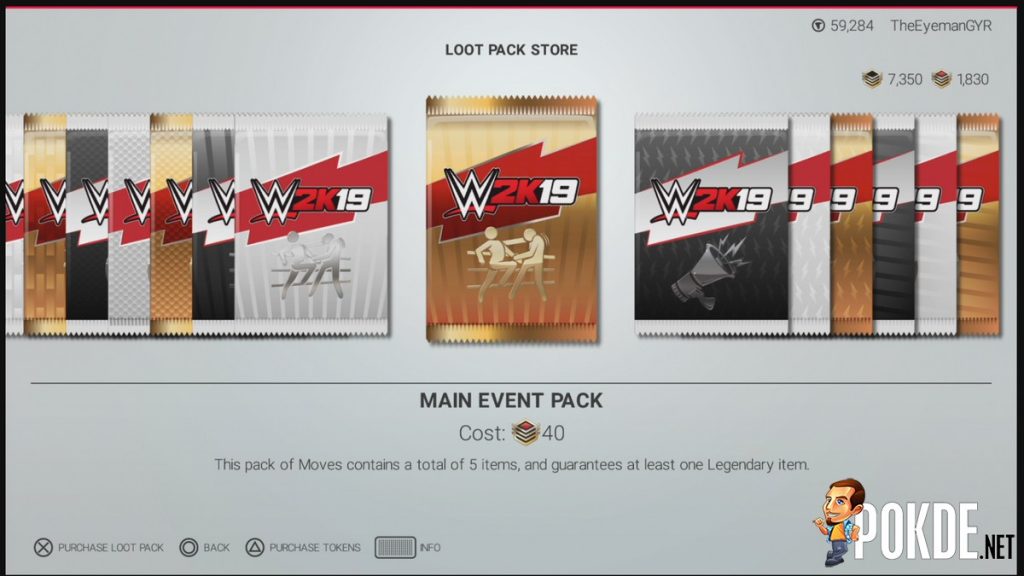 The core game itself will have a number of content that you will need to unlock by playing the game. This will include certain WWE Superstars and Legends but if you were to purchase the Deluxe Edition, you will have access to the Accelerator DLC, which unlocks all of it from the very beginning. Despite that, there are still some content that requires unlocking but it’s mostly to do with your own created character.

For example, a lot of the fancy moves you see performed by famous wrestlers will require you to use in-game currency to buy virtual packs which will yield you new wrestling moves, taunts, cosmetics, and more at random. In a sense, it is a loot box system. While I understand the need to grow your custom wrestler to reflect his journey from the independent circuit to WWE, having 90% of the moves locked and only being able to unlock them at random makes the game feel rather limited. 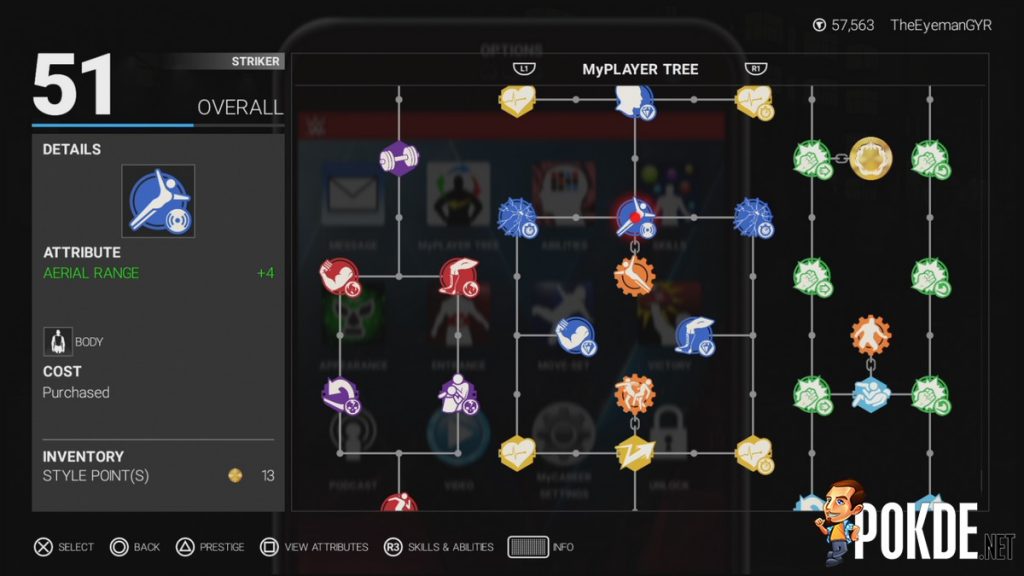 Your custom character will be very weak at the beginning.  To improve their performance, you will have access to a Skill Tree where you are required to use Style Points to upgrade their parameters as well as unlocking new abilities. You gain points as you level up with experience points. This makes me feel like my custom characters are developing to become better performers the more I use them, which I feel is a great addition to WWE 2K19. 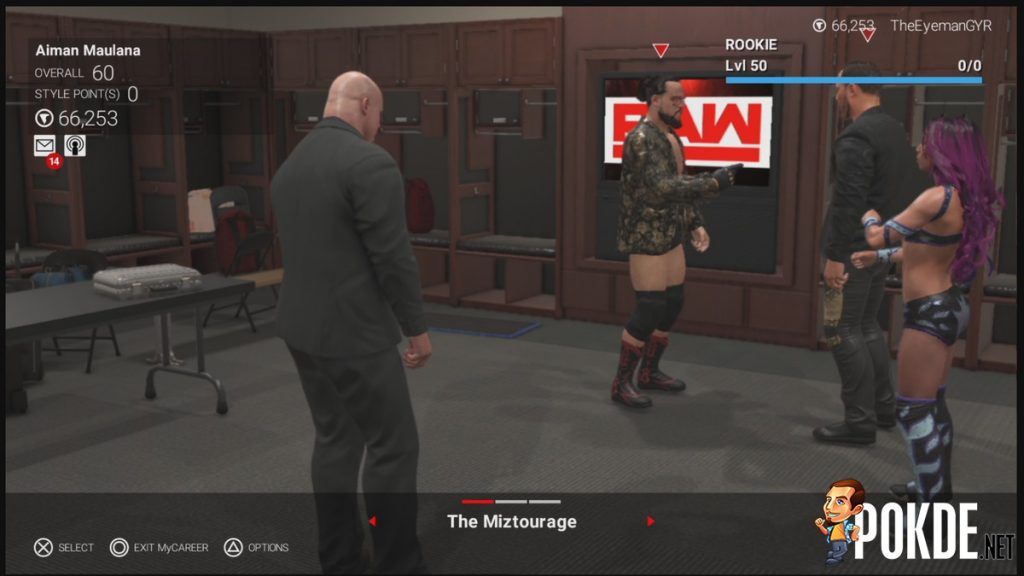 However, keep in mind that you will reach a point where your level will be maxed out and you can’t gain any more Style Points despite having plenty of room to grow. When this happens, you have to upgrade your “Prestige” in the Skill Tree menu, which will put you back to Level 1 but with all your upgrades intact. This is especially important for newcomers to take note of as you may end up wasting precious experience points without it. 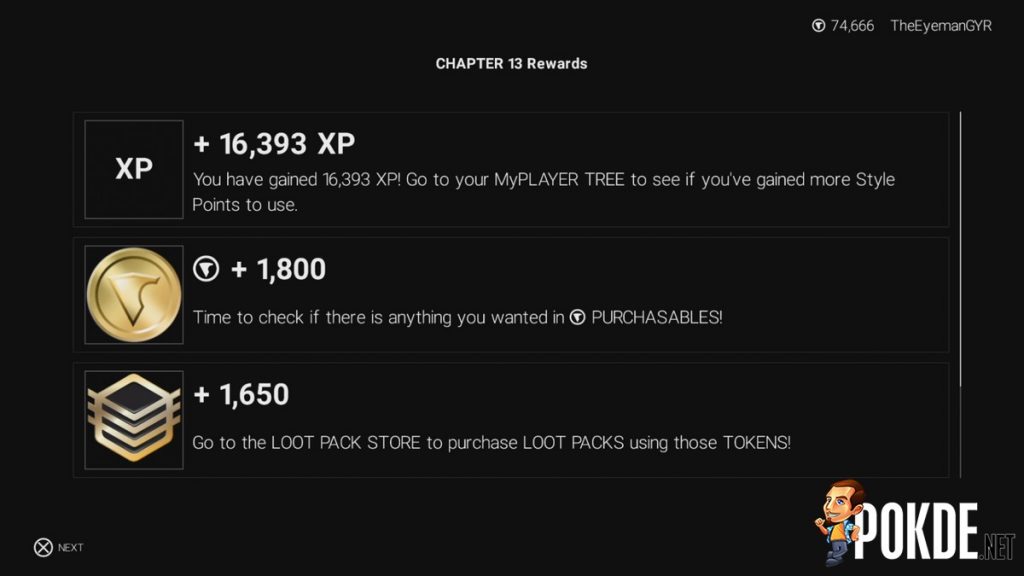 Once you are done with the MyCareer story mode, you can continue grinding by playing the post-game portion of the mode, which will just have you battling wrestlers for the sole purpose of gaining experience points. In this portion, you will see a number of WWE Superstars that you don’t get to see from the main storyline challenge you in a variety of matches and situations. This includes the likes of Dean Ambrose, Seth Rollins, Roman Reigns, Titus O’Neil, Velveteen Dream and many more. 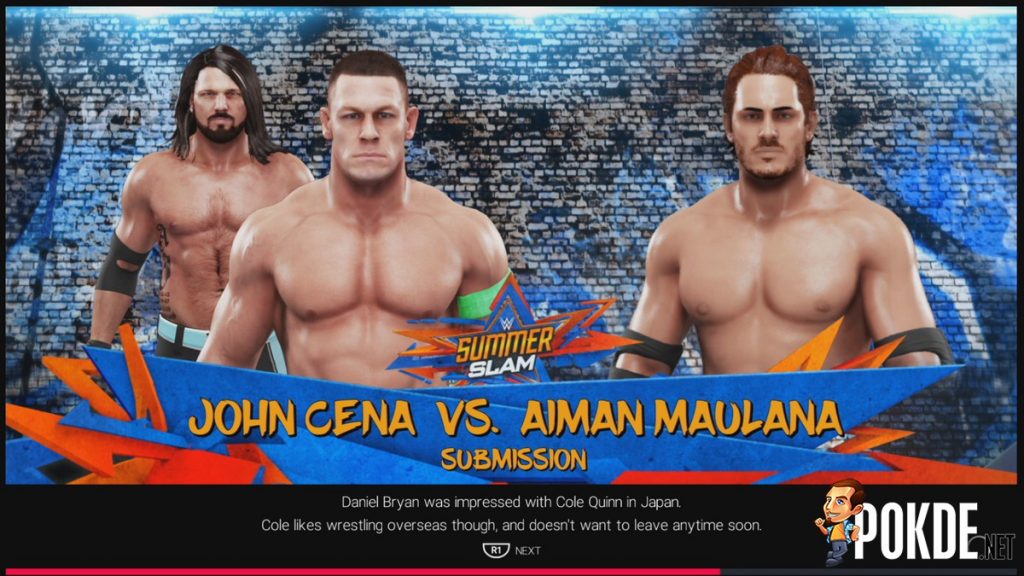 If you have reached this point of the game, there’s really nothing much left to do aside from grinding for points to strengthen your character and unlock new moves. Chances are, you would only enjoy playing the game from this point onward with other people either offline or online. 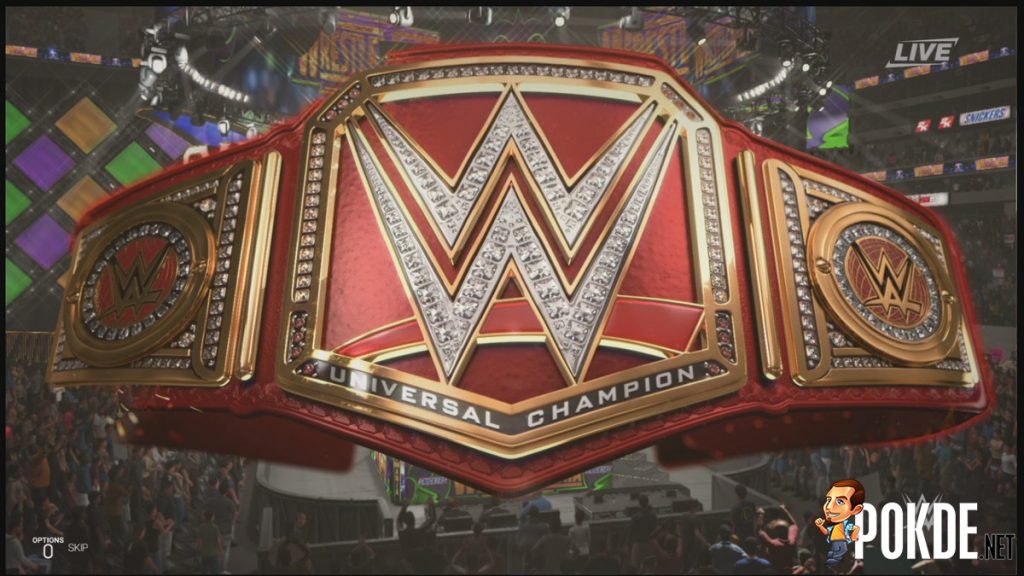 WWE 2K19 is a fun game to play with friends but definitely not one for you to play alone. While the MyCareer story mode provides an adequate amount of gameplay and a storyline that continues to keep you hooked, it feels rather shallow at the end which makes me feel rather unsatisfied with how it played out.

While some gameplay aspects are rather quirky, it is certainly the kind of game that most players can easily hop in to play together. I personally feel that some mechanics definitely needs to be reworked in order to be as entertaining as what we see on TV. Personaly, I am a big of WWE so I can see myself buying this but I’d be leaning more towards the standard edition, and maybe get the Season Pass later on if there’s anything new that is worth getting. With that being said, I award WWE 2K19 with our Silver Pokdeward.

This review was based on a copy of WWE 2K19 Digital Deluxe Edition.

Aiman Maulana
Jack of all trades, master of none, but oftentimes better than a master of one. YouTuber, video editor, tech head, and a wizard of gaming. What's up? :)
Pokde Recommends
2K GamesreviewsimulatorwrestlingWWEWWE 2KWWE 2K19GamingMicrosoftPCMRPS 4ReviewSonyXBOX One
MORE
Read More
1439

PokdePicks:How to Fix Borderlands 3 Crashing / Freezing Issues on PC – There Are a Few Solutions
Read More
1967