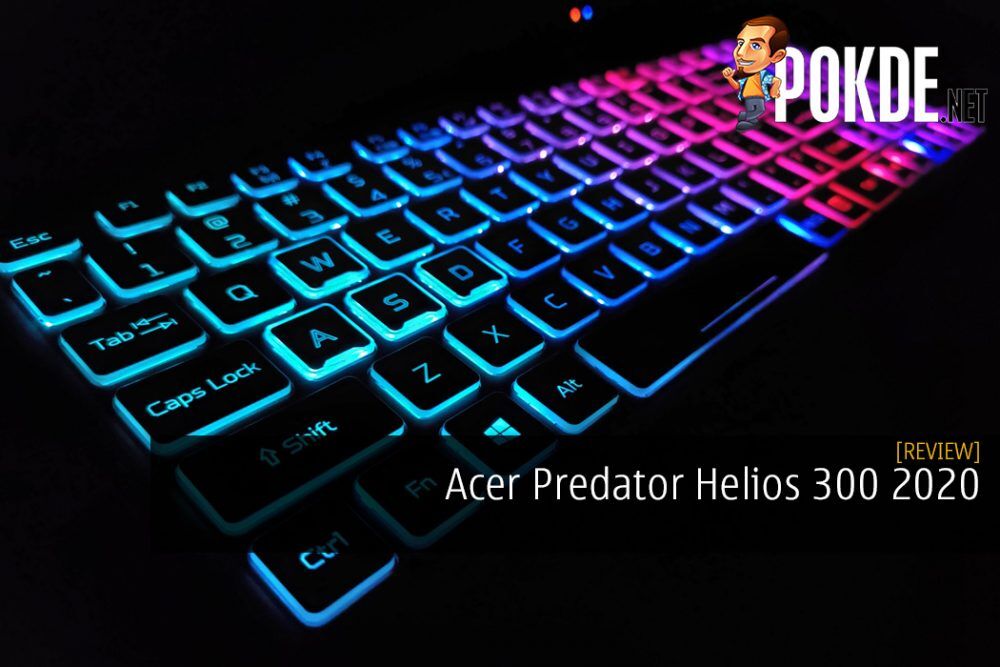 The more affordable gaming laptop in the Predator lineup is back with a 10th Gen refresh and Wi-Fi 6. The Acer Predator Helios 300 packs quite a bit of firepower and is upgrade-friendly. Is it worth your money? Let's find out.

If you already own the previous iteration, there's really no reason to upgrade to this one but otherwise, it's still one worth considering.

The Acer Predator Helios 300 2020 retains the same design from its predecessor. It looks like a beefier Triton 300 but I wouldn’t call it bulky as it’s still pretty portable within gaming laptop standards. You get a glowing Predator logo with no text on the lid surrounded by the dark blue colour scheme and two slits sandwiching the logo. It’s a bit of a fingerprint magnet but it’s not too bad.

On the left side, you have a Kensington Lock, an RJ45 LAN port, two USB-A ports, and a combo audio jack. On the right side, you have a USB-C port, another USB-A port, an HDMI port, and a mini DisplayPort. There are also air vents on both sides with identical placements. You might be wondering where the charging port is by now. That is the only port residing in the rear, sandwiched between the two air vents.

As for the bottom, you can see about 10 screws, four rubber stands, product stickers, speaker grilles, and a whole lot of air vents. You can easily spot the CPU fan here, and one screw is hidden behind an Acer sticker, which will void the warranty if torn.

There’s also a small “Do Not Touch” warning near the rear vent.

Overall, I still dig the design of the Acer Predator Helios 300 2020 gaming laptop. It has a solid build quality, still relatively portable, and doesn’t go overboard with the gamer aesthetics. As the design is mostly the same, you may find it a little boring but to me, why fix something that isn’t broken?

If you need something more powerful, check out the Acer Predator Helios 700 that launched alongside this by clicking right here.

Let’s start things off with CrystalDiskMark. The Acer Predator Helios 300 2020 has a very speed SSD storage. This will ensure minimal bootup times / loading speed for pretty much everything you need to do on the machine. In case you’re wondering, it’s the Western Digital PC SN730 NVMe PCIe SSD.

Moving on to Cinebench R15, the performance is about what you’d expect from recent Intel Core i7 CPUs. I did expect it to perform better but given the single stick RAM configuration, it’s not a surprise. You should see a notable boost when upgraded to dual-channel RAM.

A similar pattern can be seen in Cinebench R20, but this time, it doesn’t completely lose out to the Acer Nitro V 2020. In general, it seemed to perform better here than on Cinebench R15 but either way, it’s definitely not a weak machine. I still do expect a good performance boost here with dual-channel RAM.

As for Unigine SuperPosition in its 4K Optimized benchmark, the Acer Predator Helios 300 2020 performed well enough. I do believe the three laptops that scored better than it here are more optimized, so you can do the same here to get a boost in performance. With that being said, nothing seems out of the usual.

A similar pattern can be seen in 3DMark’s Time Spy as well. It’s interesting that the same GPU paired to an older generation CPU scored better. Running temperature seems to be fine with no thermal throttling, in case you were wondering if that caused a dip in the score.

In 3DMark’s Port Royal benchmark for ray tracing, we weren’t surprised by its score. Given how resource-intensive ray tracing is, the RTX 2060 is definitely not powerful enough to truly handle the load. Sure, it can do ray tracing, but I personally wouldn’t recommend it, at least not for now.

Moving on to PCMark, it seems to be a rather rounded gaming laptop with the exception of Digital Content Creation. I do believe this is due to the single stick RAM configuration, as well as its capacity of 8GB. If you were to get two sticks of 8GB DDR4 RAM, the score here should be relatively on par with the higher end Triton 500 2020.

When it comes to gaming, I’m actually surprised by the results as it seems to vary quite a bit. I expected it to have higher frames in some games, and lower in others, so it’s a bit weird. For instance, I expected it to go above 100 FPS easily for CS:GO but also expected it to struggle more in Final Fantasy XV. It’s not bad by any means, it does perform well enough but if you upgrade to two sticks of 8GB RAM, you might see an increase of 5 to 10FPS.

With the exception of the ones labeled 4K and DLSS, all games ran in Full HD at their highest settings. You can still get more FPS for a smoother experience if you lower down your settings.

As for battery life, PCMark’s Modern Office endurance test saw this machine getting 3 hours and 37 minutes per full charge, which is average for a gaming laptop. On the gaming endurance test, it managed to last an hour and 7 minutes. In comparison, the Triton 500 has the better battery life in both areas.

Compared to my own real world use for web browsing, videos on YouTube, word processing, and picture editing, I got about 3 and a half hours of use before I had to charge it again. This is average, but it isn’t bad and essentially what you can expect from a gaming laptop nowadays.

If you want to compare the performance with its previous iteration, click right here.

The Acer Predator Helios 300 is a decently powered gaming laptop and is the more affordable one within the Predator lineup. You get an Intel Core i7-10750H CPU, NVIDIA GeForce RTX 2060 GPU, 8GB single channel 2933MHz DDR4 RAM, and 512GB NVMe PCIe SSD. It’s great for Full HD gaming but its potential is held back by the RAM. Double the capacity by adding another 8GB stick and you should see the performance soar even higher.

It uses a Full HD 144Hz IPS display with good viewing angles and colours for gaming. Realistically, you’d probably only be able to take advantage of the high refresh rate on Apex Legends and CS:GO with graphics settings turned down a notch.

I personally feel that the colours aren’t as good compared to the Triton 500 2020 so if you want to do colour-accurate work, best to hook it up to an external display. The side bezels are relatively thin but the top and bottom are on the thick side. It does have less flex and seem sturdier compared to the Triton 500. You can open the lid up to 145°, which is good enough.

For running temperatures, both the CPU and GPU ran well with no thermal throttling on my end during my benchmarking process with CoolBoost enabled. The CPU did reach 90°C but it hardly went above that. The GPU on the other hand ran noticeably cooler, which is great. If you’re worried, you can always use the Turbo button for maximum fan speeds. Generally, the fan noise is within acceptable levels but on Turbo, it gets really loud. It’s still worth it for lower running temperature.

The Acer Predator Helios 300 has a good array of ports. You have three USB 3.2 Gen2 Type-A ports, a USB-C port, an RJ45 LAN port, an HDMI port, a Mini DisplayPort, and a combo audio jack. As it has both mini DisplayPort and HDMI, it makes a tri-monitor display setup easy to use. Moreover, with one of the USB Type-A ports having power-off charging, this laptop can function as an emergency powerbank. Would be great if this one had an SD card reader.

The Acer Predator Helios 300 2020 gaming laptop; 4-zone RGB chiclet keyboard. It still works well and is comfortable to type on with decent tactility so I have no complaints. The trackpad itself works fine and there’s nothing to boast about. I do hope the next iteration will add a fingerprint scanner here for added convenience.

As expected from a Predator-series machine, it comes with the PredatorSense software. You can activate it by by pressing the Predator button on the Numpad or manually looking it up on Windows 10. You can do some simple overclocking, adjust fan speeds, customize hotkeys, and more. The UI is simple, straightforward, and pleasing to the eyes so I’m sure most people would have no issues using it.

On the networking side, it is powered by the KILLER AX1650 Wi-Fi which lets you take advantage of the new 802.11ax technology. While I don’t notice much difference in terms of speed as my home internet isn’t super fast to begin with, it’s certainly reliable and seems to get better reception than my other devices, like my desktop and smartphone using 802.11ac Wi-Fi. You can further optimize it in KILLER Control Center.

For the speakers, the Acer Predator Helios 300 2020 gaming laptop is loud but it lacks the depth to make it enjoyable. It emphasizes more on the highs with lows essentially being non-existent, making the audio sound rather hollow especially in high volumes. It’s best to use your favourite pair of headphones for a more immersive experience. The DTS:X software will work better that way too.

The Acer Predator Helios 300 2020 is a good gaming laptop to consider. It still has a solid build quality, 144Hz IPS display, packs a good amount of firepower, is still rather portable for a gaming laptop, speedy SSD storage with good capacity, comfortable 4-zone RGB keyboard, Wi-Fi 6, and a good array of ports.

However, the battery life is average, it’s a fingerprint magnet, it doesn’t differ much from its previous iteration, 4-zone RGB feels a little outdated in 2020, the fan gets really loud in Turbo, and it’s true potential is held back by the single stick 8GB RAM. If you already own the previous iteration, there’s really no reason to upgrade to this one but otherwise, it’s still one worth considering.

With that, I award the Acer Predator Helios 300 2020 gaming laptop with our Silver Pokdeward.

Big thanks to Acer Malaysia for passing us this laptop for the purposes of this review.

Aiman Maulana
Jack of all trades, master of none, but oftentimes better than a master of one. YouTuber, video editor, tech head, and a wizard of gaming. What's up? :)
Pokde Recommends
10th Gen Intel CoreAcerAcer PredatorGaming laptopIntelLaptopMalaysiaNVIDIAGadgetLaptopReview
MORE
Read More
559