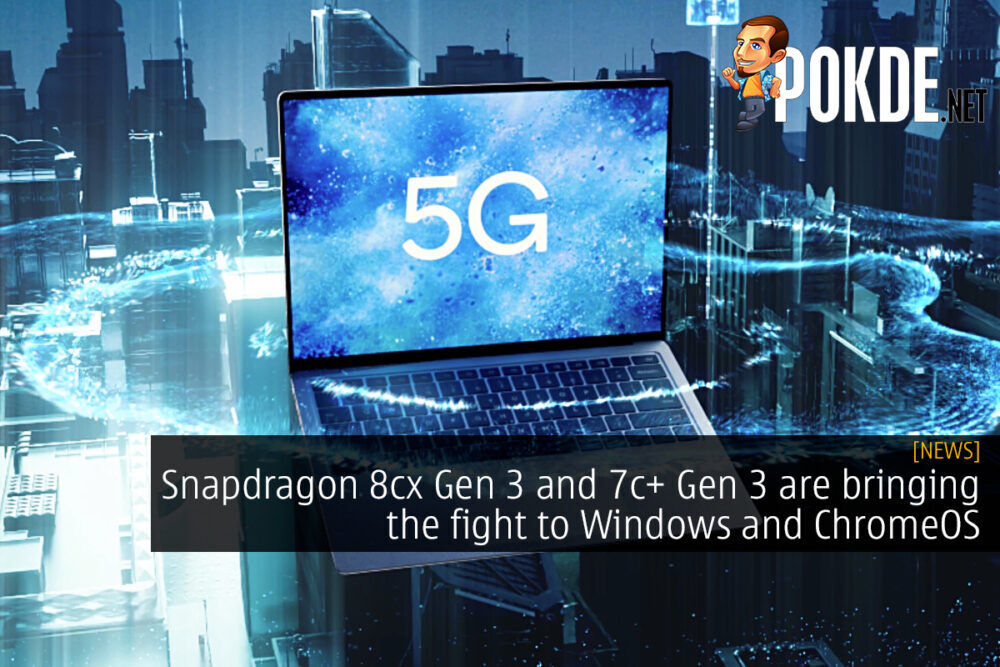 After the Snapdragon 8 Gen 1, Qualcomm also announced the latest additions to their Always On, Always Connected PC portfolio. There’s the premium, high-performance Snapdragon 8cx Gen 3, and the more value-oriented Snapdragon 7c+ Gen 3, both of which will power next-gen Windows and Chrome OS laptops. 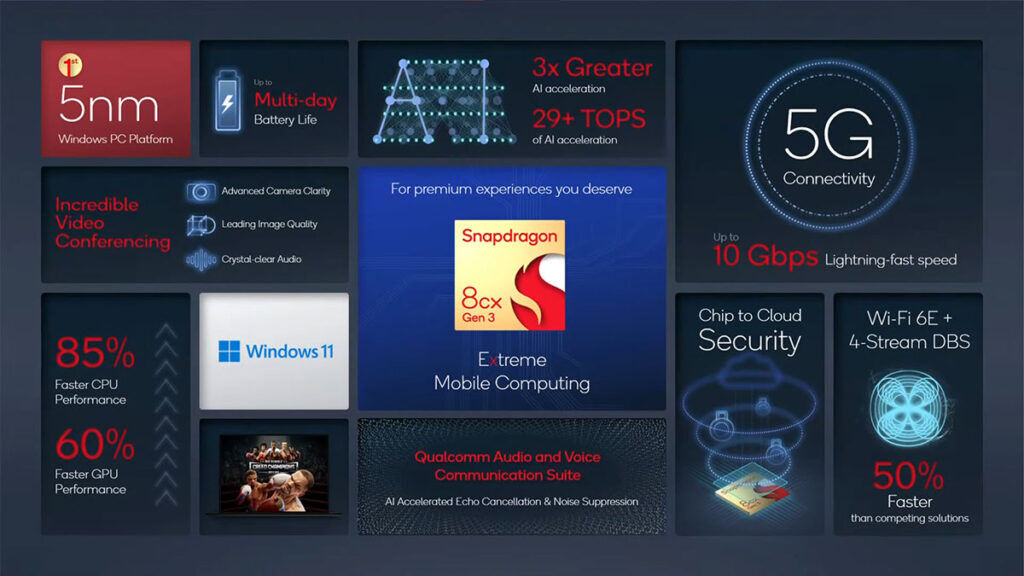 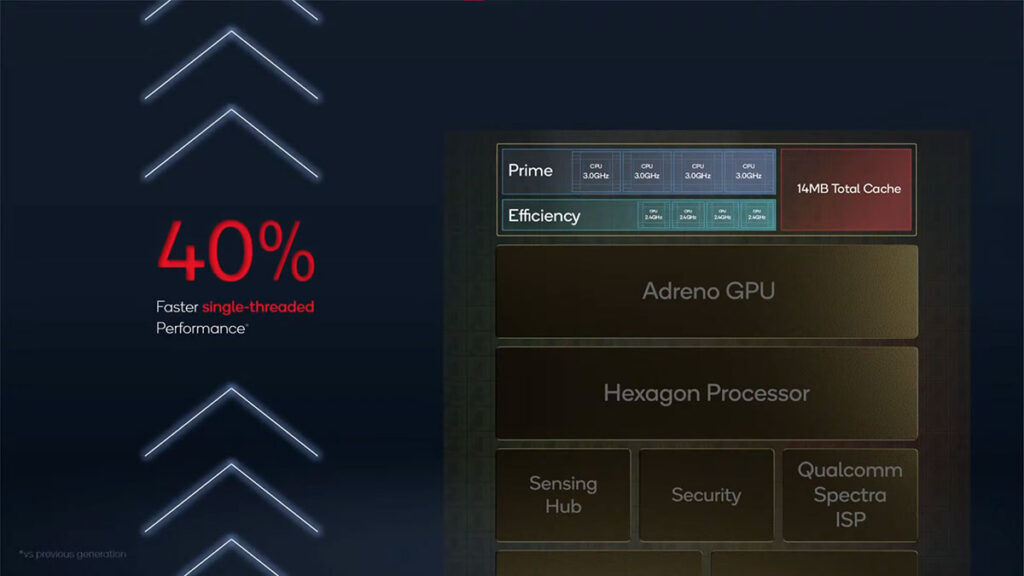 What is known is that you will be getting four 3.0GHz “Prime” cores and four 2.4GHz efficiency cores. Qualcomm is claiming 60% better performance per watt than the competition, which should be very interesting to see in practice. Meanwhile over on the graphics end, the new Adreno GPU promises 60% better performance than last-gen, which Qualcomm suggests is enough for FHD gaming at 120FPS.

As a SoC, the Snapdragon 8cx Gen 3 also packs other components like a Spectra ISP that enables 4K HDR camera quality, quad-camera support, better autofocus, auto white balance and exposure, as well as faster camera start-up times. 4K HDR and quad-camera setups aren’t really things you will find in the laptops of today, but I sure look forward to seeing laptops taking advantage of these capabilities. You also get AI noise and echo cancellation, something which is available on a lot of laptops today. 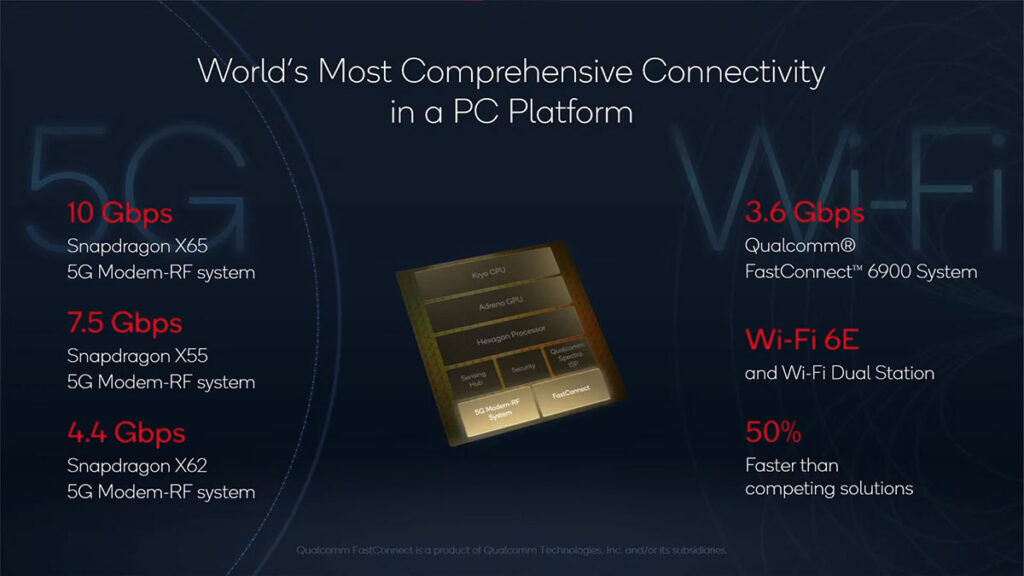 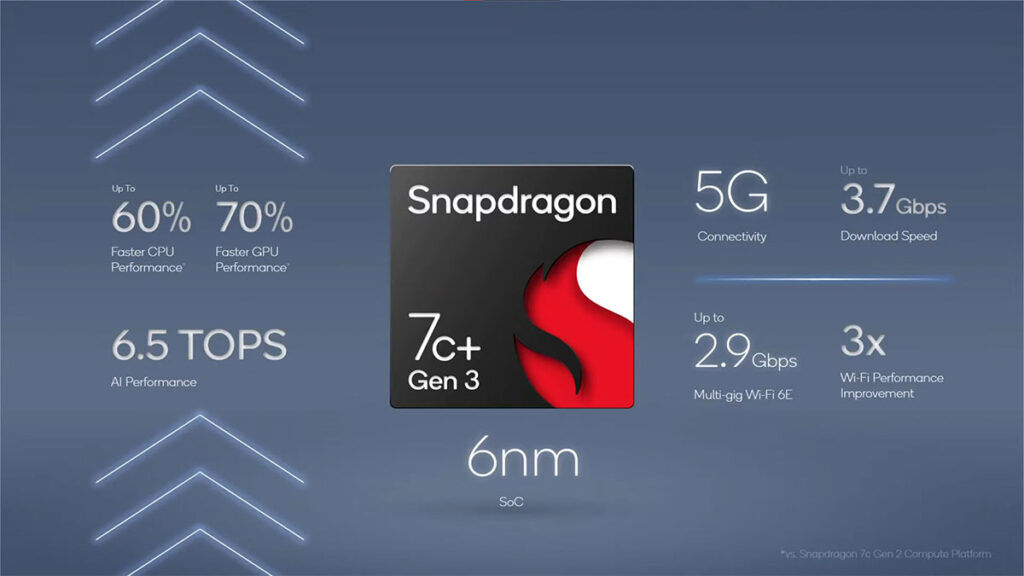 For more wallet-friendly machines, there’s the Snapdragon 7c+ Gen 3. The name is becoming a mouthful, I know. But I do believe that we will see more of this in the mobile space as well. Stay tuned for the Snapdragon 8+ Gen 1. Called it. In any case, the Snapdragon 7c+ Gen 3 is apparently such a huge leap forward from the Snapdragon 7c Gen 2 that Qualcomm decided to give it not only a new generational number, but also a “Plus” in its name. For starters, we are seeing a jump from the 8nm node to the more recent 6nm process.

It seems that Qualcomm is a bit more shy when it comes to revealing actual clock numbers with the Snapdragon 7c+ Gen 3, and instead only makes broad claims in comparison to its predecessor. This chip promises 60% higher multi-threaded performance and 30% higher single-threaded performance versus the Snapdragon 7c Gen 2, indicating either a significantly newer architecture or much higher clocks, or both. Meanwhile on the graphics end, we see a 70% increase in performance.

AI performance sees a smaller leap, with it going from 5TOPs to 6.5TOPs, but it is probably still very impressive in the entry-level category that Qualcomm is targeting with the Snapdragon 7c+ Gen 3. Qualcomm also integrated the Snapdragon X53 5G modem that enables speeds of up to 3.7Gbps, as well as the FastConnect 6700 for WiFi 6E speeds of up to 2.9Gbps. While 5G speeds of 3.7Gbps might not sound like much, it is a massive upgrade from the Snapdragon 7c Gen 2’s 600Mbps enabled by its Snapdragon X15 LTE modem. 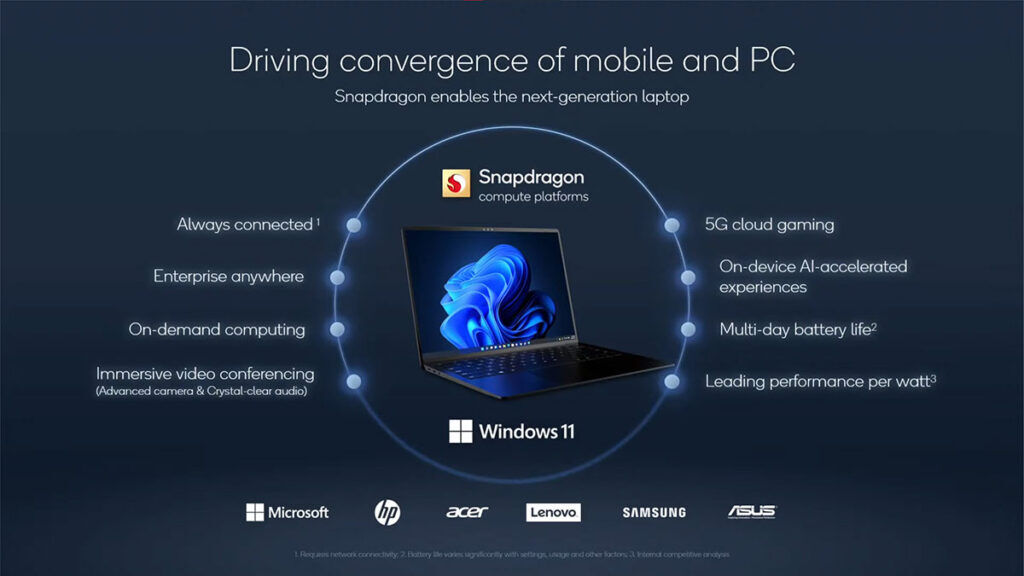 Qualcomm expects devices featuring the latest Snapdragon 8cx Gen 3 and 7c+ Gen 3 chipsets to be available in the first half of next year. That should coincide nicely with the availability of the 12th Gen Intel Alder Lake mobile parts. While Alder Lake probably won’t be a match for the Snapdragons when it comes to efficiency, they should put up a very good fight when it comes to performance. Well, let’s see!

Pokdepinion: Never really got a great experience with Windows on Arm… Hopefully Windows 11 and these new chipsets are what we needed…

The Legend of Zelda Majora’s Mask Easter Egg Revealed 21 Years After Re...
Next