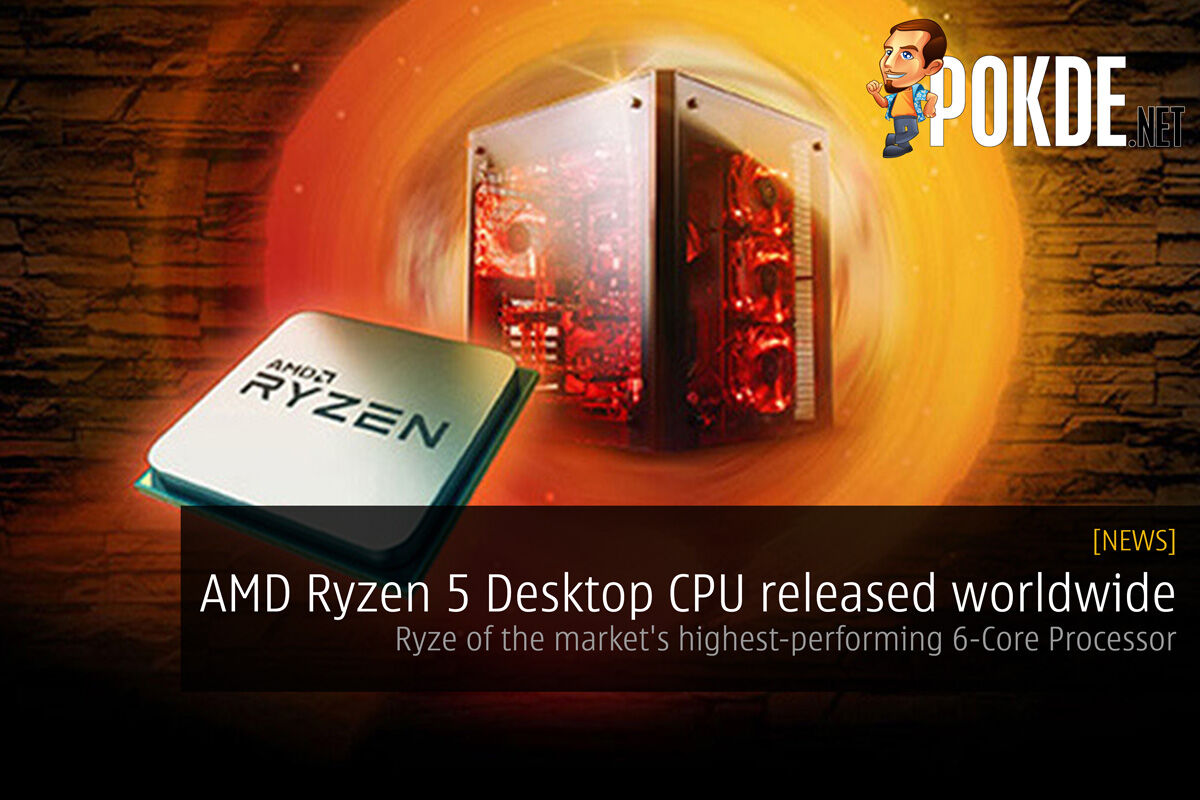 Following the land of the AMD Ryzen 7 CPU recently, combined with our recent announcement of the R5 CPUs, AMD is has finally lifted the veil off all four models of its new high-performance AMD Ryzen 5 dekstop processors. The AMD Ryzen 5 processors deliver immersive experiences with up to 87% more performance when comparing the AMD Ryzen 5 1600X with Intel’s flagship Core i5 Kaby Lake CPU – the 7600K.

The AMD Ryzen 5 features AMD SenseMI Technology that includes intelligent “learning” capabilities allowing it to customize the performance based on your applications.

AMD Ryzen is a proven game-changer, ultimately bringing innovation and competition back across PC market segments, and we are excited to introduce the next tier of AMD Ryzen processors to the market today. AMD Ryzen 5 revitalizes the mid-section of the desktop market, offering consumers excellent pricing while providing a smooth and impressive overall experience, whether for high-performance gaming or demanding applications. Jim Anderson, Senior Vice President and General Manager of Computing and Graphics Group

There are two 6-cores and two 4-cores AMD Ryzen 5 models available beginning today, all featuring AMD simultaneous multi-threading (SMT) technology. All of them support the new AM4 infrastructure, and most motherboard designs have already incorporated it.

The AMD Ryzen 5 1600X and 1600 models are designed for smooth gaming and streaming, delivering true workstation-class performance in a new market segment. Both of these are the highest-performing and lowest power 6-core desktop processors with 12 threads delivering advantage in multi-core processing capabilities in its price level.

The AMD Ryzen 5 1500X and 1400 are designed for performance gaming and processing featuring 4-cores with 8 threads and AMD SenseMI Technology. To deliver the best experience, the 1500X features up to 200MHz of XFR (Extended Frequency Range) when used with superior cooling setting it as on of the largest extended frequency range seen on an AMD Ryzen processor so far.

With the steady rise of eSports, expecting to reach $1 billion in revenue by 2019, broadcasting game footage has become a major trend, and with certain games being CPU-intensive, simultaneous gaming and streaming is acknowledged to require multi-threaded CPU design. For these gamers category, the AMD Ryzen 5 1600X processor with 6 cores and 12 threads offer a highly accessible solution for high-quality [email protected] with 3500Kbps game streaming.

All four AMD Ryzen 5 models are available beginning today at retailers around the world. All processors support the AM4 infrastructure which is already available among most brands like ASUS, MSI, AsRock, Gigabyte and Biostar which utilize the X370, B350 and A320 chipsets. With the release of AMD Ryzen 5 processors, AMD motherboard partners are also highlighting the A320 chipset-based motherboards, specifically addressing the needs of mainstream PC gaming customers looking for feature-rich, robust and affordable platform for gaming.

Pokdepinion: AMD is on a roll with the Ryzen family, and now they are targeting Intel’s lower end products. If you give me a choice of 6 core/12 thread vs 4 core/8 thread, for the same amount of money (or less), you know which one I will choose ;)