Wi-Fi 7 Devices Should Come In 2023 Says MediaTek
Sections
Gadget
Now Reading
[Preview] We get our hands on the vivo V9 — offers a higher screen-to-body ratio than the iPhone X for a fraction of the price!
NextPrev
Contents
2392
0

[Preview] We get our hands on the vivo V9 — offers a higher screen-to-body ratio than the iPhone X for a fraction of the price! 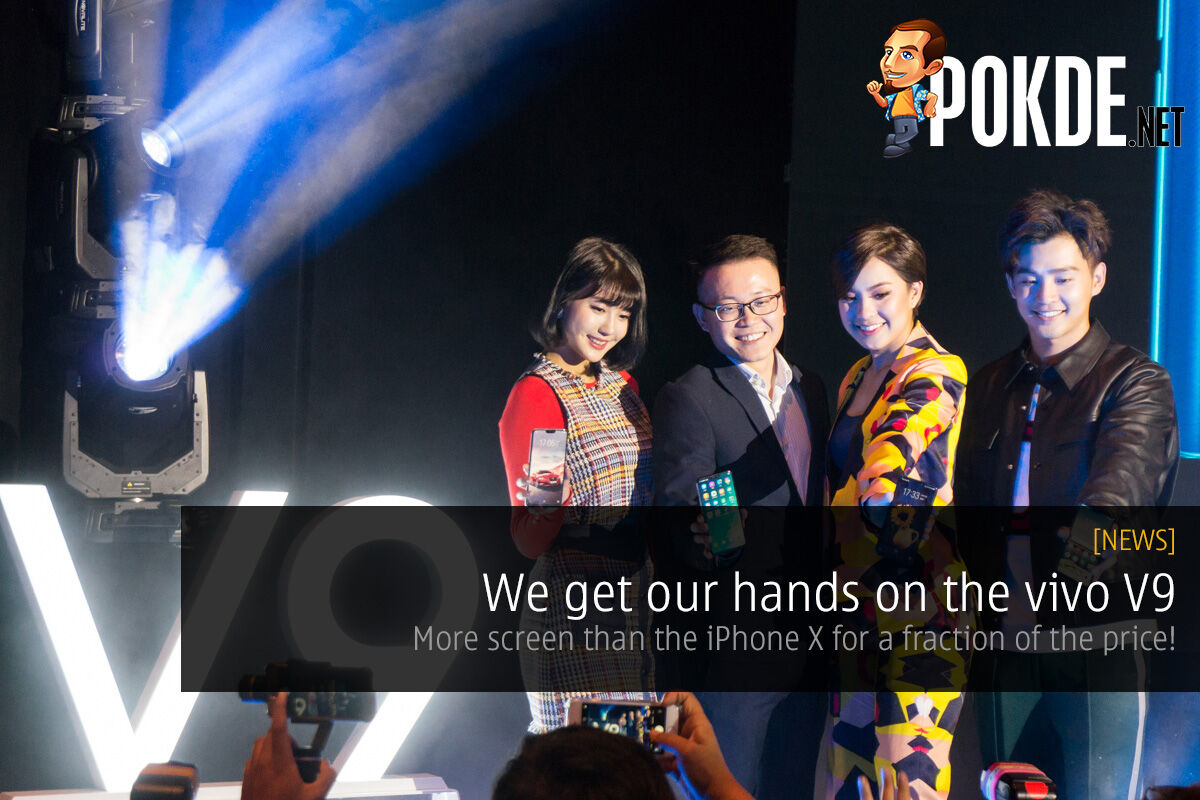 The vivo V9 offers much of the iPhone X’s unique design, with a price tag that is just a bit more than 1/4th of the price of the latter. 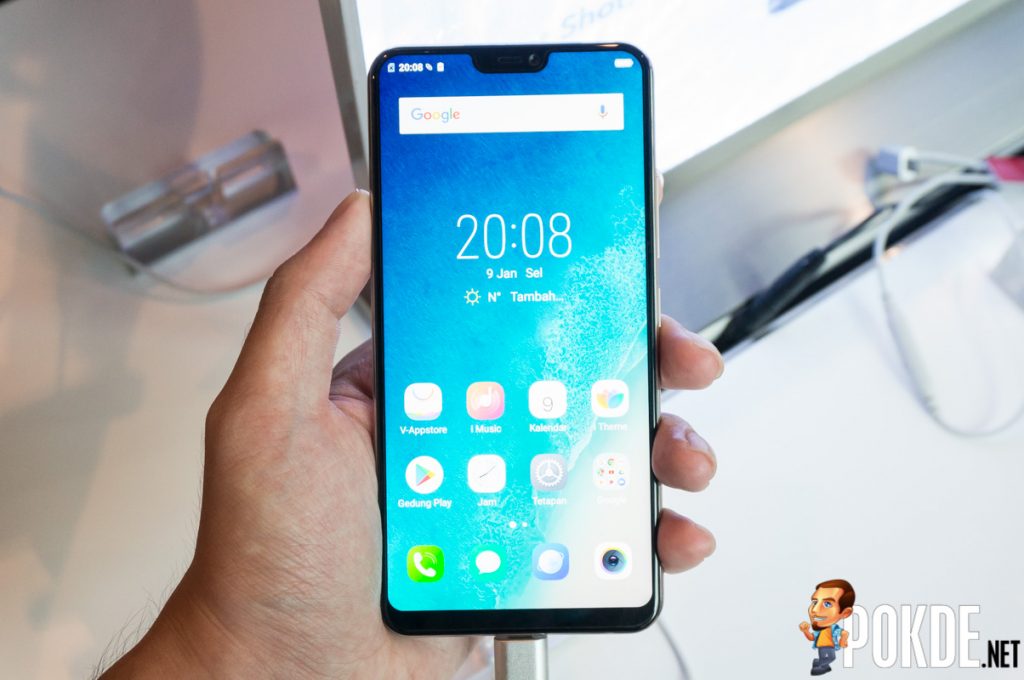 One of the most iconic design decisions made by Apple is the iPhone X’s notch. It has been the brunt of Samsung’s joke, but it seems to be catching on in the Android world. However the lack of Face ID hardware allows manufacturers like ASUS and vivo to make the notch smaller. Here we have the vivo V9, with 90% screen-to-body ratio, with a 6.3″ display crammed into a 5.5″ body. 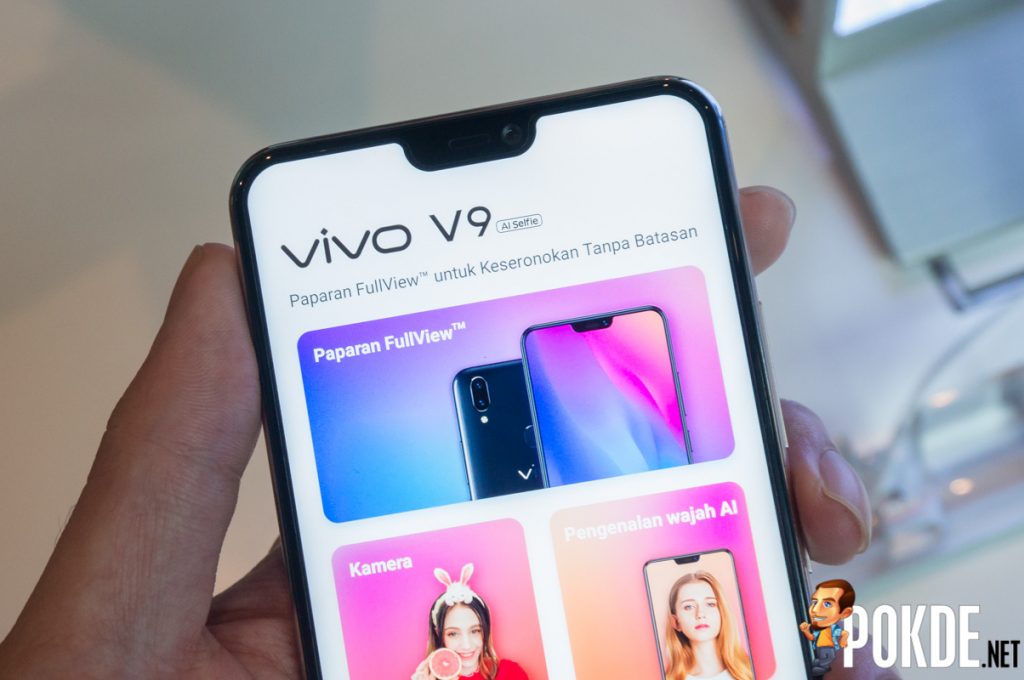 The smaller notch does make for a distinctive look, and in our limited time with the vivo V9, it appears that vivo has managed to work around it pretty well. We would love to try out lesser known games or spamming the device with notifications to see how vivo works with the notch, but so far we see no problems. The front camera touts a high resolution of 24MP, and offers an array of features like Funmoji and AI Face Access. 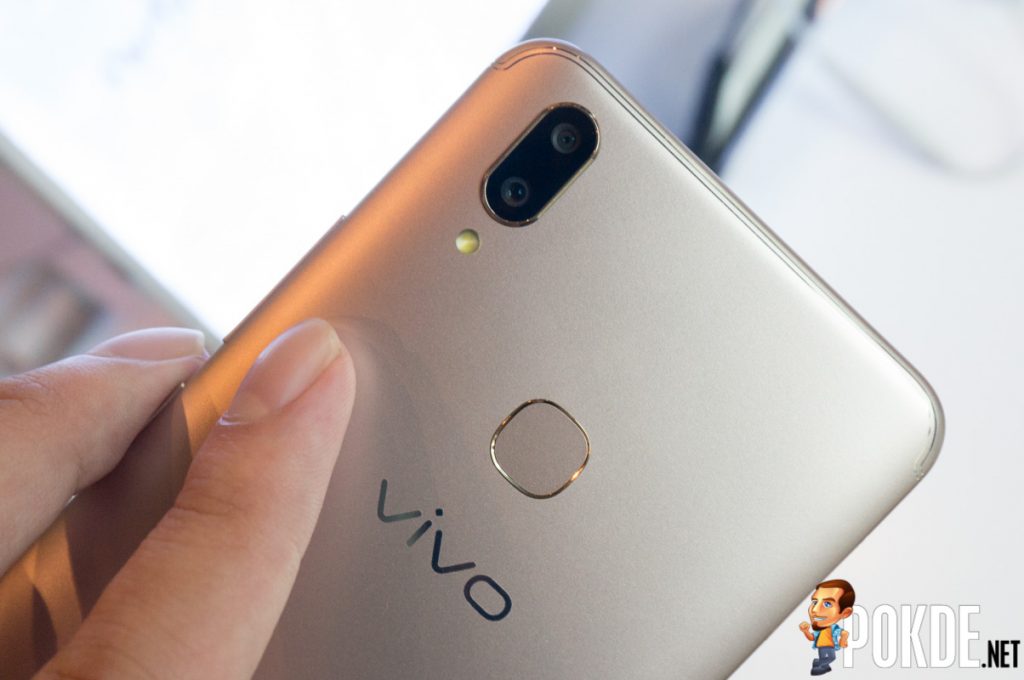 Here’s another design cue borrowed from Apple’s playbook. The camera is oriented vertically, however we don’t see the flash crammed onto the camera hump along with the dual cameras. The configuration differs from Apple’s zoom combo though, as the secondary 5MP camera only offers depth detection for cool bokeh effects to add to the 16MP shots taken with the primary shooter. Aside from copying the fruity smartphone’s aesthetics, vivo also decided it was OK to use plastic in a mid-range device in 2018, but we are sorry to say that it feels very cheap in hand. It was way too light for any sense of quality. The guys at vivo also thought it would be cute to throw in antenna lines when the entire back is plastic. 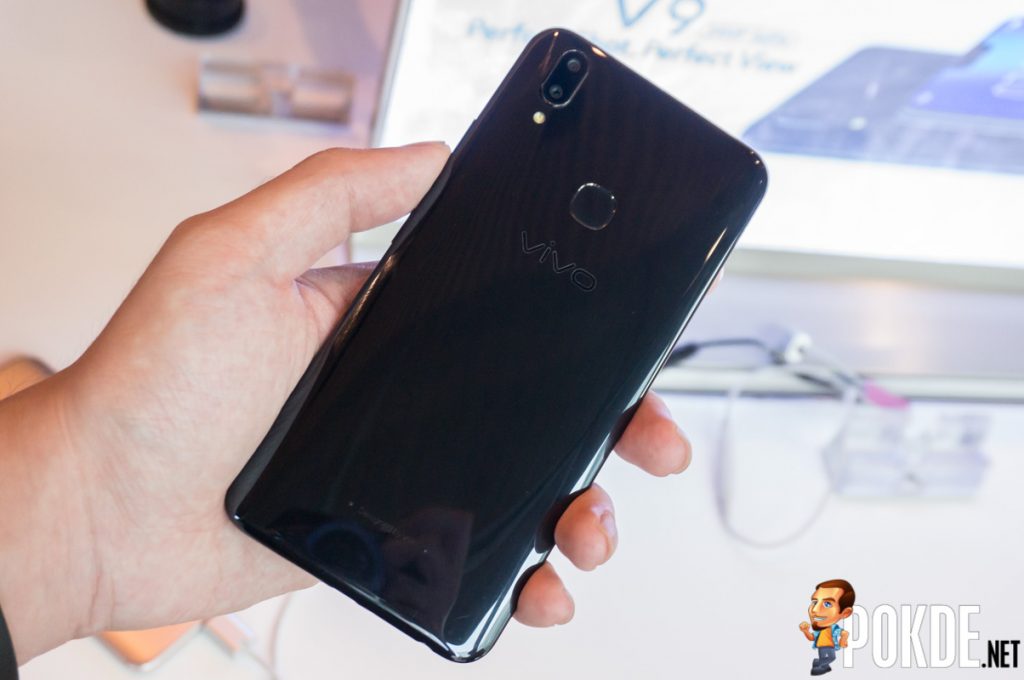 The glossy black one is even more ridiculous when you consider that plastic is easily scratched. The gold one was at least decent, as it featured a faux sandblasted aluminium finish. The glossy one picked up scratches and fingerprints like a champ, and we dare guarantee you that if used naked for more than a week, you would be left with a battered device even its mom won’t recognize. In fact it was so prodigious at picking up scratches, that the black demo devices had to be requested from the staff on the floor, and even those devices were starting to get scuffed up already. But hey, the black version doesn’t have visible antenna lines. 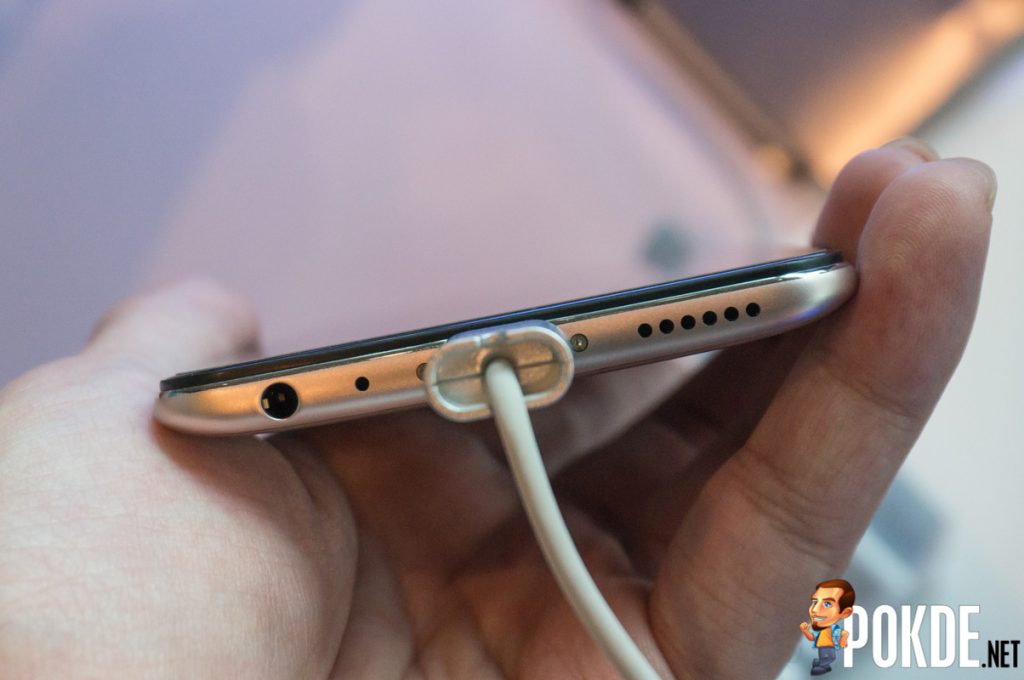 A 3.5mm jack still finds its home on the bottom of the vivo V9, with a microUSB port and loudspeaker accompanying it. Overally it doesn’t look particularly well crafted when you look at it from the side. 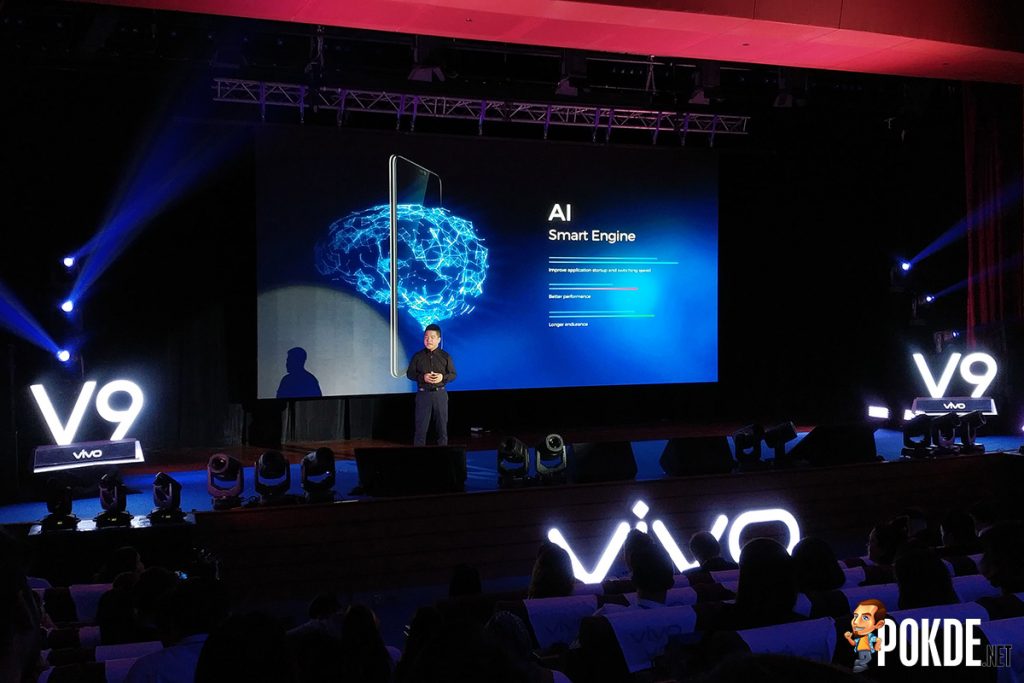 AI is the next big thing for smartphones, and vivo is not one to be left out. The vivo V9 touts AI performance optimizations in addition to the AI camera features. The demo unit I was messing around with actually got stuck when exiting the demo mode to the homescreen more than once. That actually killed the entire mood for me, and I didn’t really venture on to try out more features on the vivo V9 after that. It should probably fare better in normal usage, as the Snapdragon 626 is not really a sluggish chipset. We will reserve any further comments until we get our hands on a review unit to thoroughly test out.

Specifications look decent, and I am happy to see the inclusion of 5 GHz WiFi here. FunTouch OS based on Android 8.1 was definitely a surprise to me, as I usually see vivo devices lagging behind in terms of updates. Perhaps it is time for a change of pace for the Chinese company? 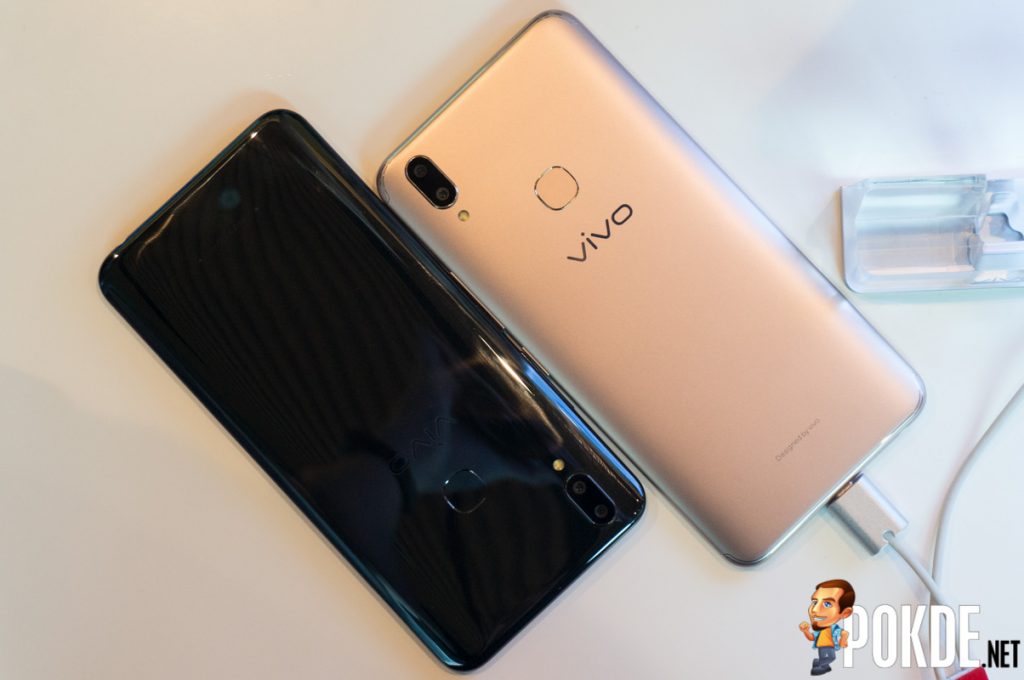 The vivo V9 will be available in Malaysia in Black and Gold for RM1399, starting this 31st March 2018. The more exclusive Blue variant will pervade you for a little longer, with it only expected to arrive later in April. It is now up for pre-orders at select vivo resellers.

Grab Takes Over Uber – What Does This Mean To The Average User?
Next