The Apple TV (2015 Edition) was recently announced and NVIDIA has already prepped up a table comparing it to its own NVIDIA SHIELD Android TV as well as several other popular media players. You can have a look at the table below and see just how far NVIDIA is ahead of the competition. Apple released the Apple TV with improved specifications, preparing it for high-quality video streaming. To be fair, the new Apple TV has seen a huge jump in terms of performance compared to its older counterpart, but the NVIDIA SHIELD TV is really not in the same league. 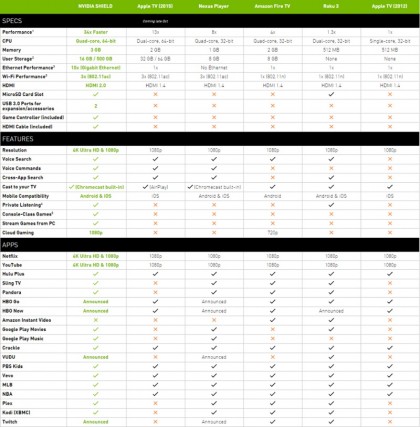 As you can see, the Shield features a quad-core NVIDIA Tegra X1 64-bit CPU, 3GB RAM and is capable of outputting 4K Ultra HD video. In contrast to this, the latest Apple TV only features a dual-core CPU, 2GB RAM, and maximum resolution of 1920×1080. Additionally, the Shield allows you to stream games from your NVIDIA-powered PC, and access expansive worlds in games like Skyrim. According to the specification sheet, the majority of apps are already supported with Twitch, VUDU and others coming very soon.

RAW specifications only mean so much, but of course the user experience is also an important factor when choosing a media player. I have no personal experience of using either device, I personally believe that Apple will have the upper hand in terms of an intuitive user interface.

Pokdepinion: The SHIELD features some very impressive specifications which will definitely push some equally impressive performance numbers, but of course it will be meaningless if you don’t use the SHIELD to the max by gaming on it. If you only use it purely as a media player for 1080p, the user interface, power consumption and overall user experience may actually swing the scales in favor of the Apple TV.

Ubisoft’s New Monopoly Madness Puts Its Own Spin On The Classic Board Game
PokdeLIVE 123 — Redmi Buds 3!
Sony’s Teaser Claims New Xperia Smartphone To Be “A Camera Attached To A Phone”
HUAWEI FreeBuds Lipstick will probably look right at home in your handbag
HONOR X30i Specifications Gets Leaked Ahead Of Launch
Latest Reviews
Read More
3139