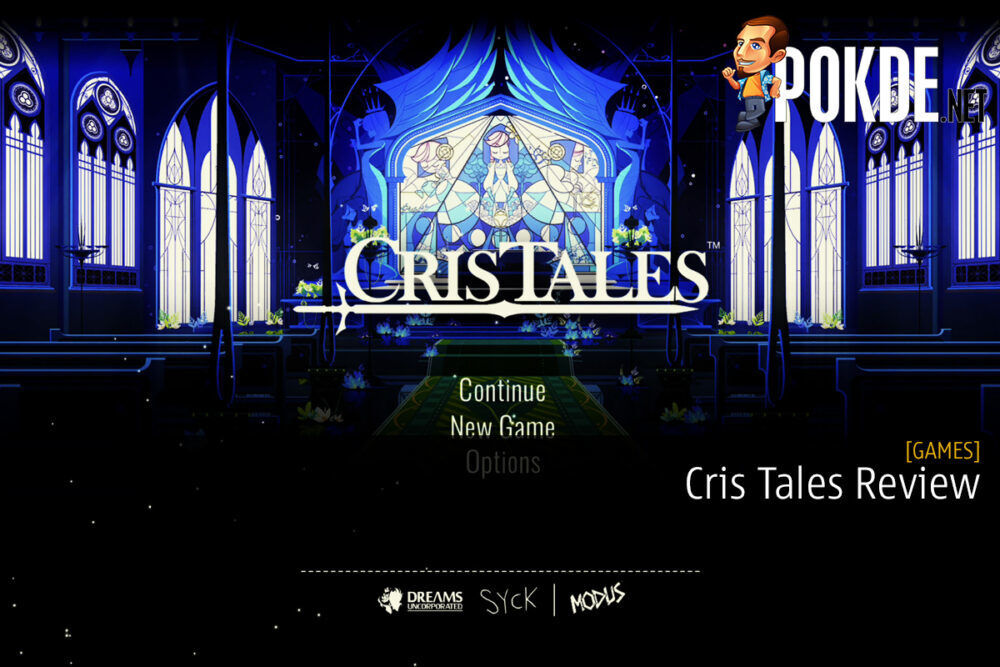 Cris Tales follow the story of Crisbell, an orphan girl from Narim Orphanage. As she was on an errand to pick up a rose for Mother Superior, the caretaker of the orphanage, it was snatched by a talking from named Matias. She eventually follows the frog to the Narim Cathedral, where her powers as a Time Mage awakened.

Cris Tales is a pretty fun RPG, especially for those who enjoy classic turn-based JRPGs.

What is Cris Tales About? 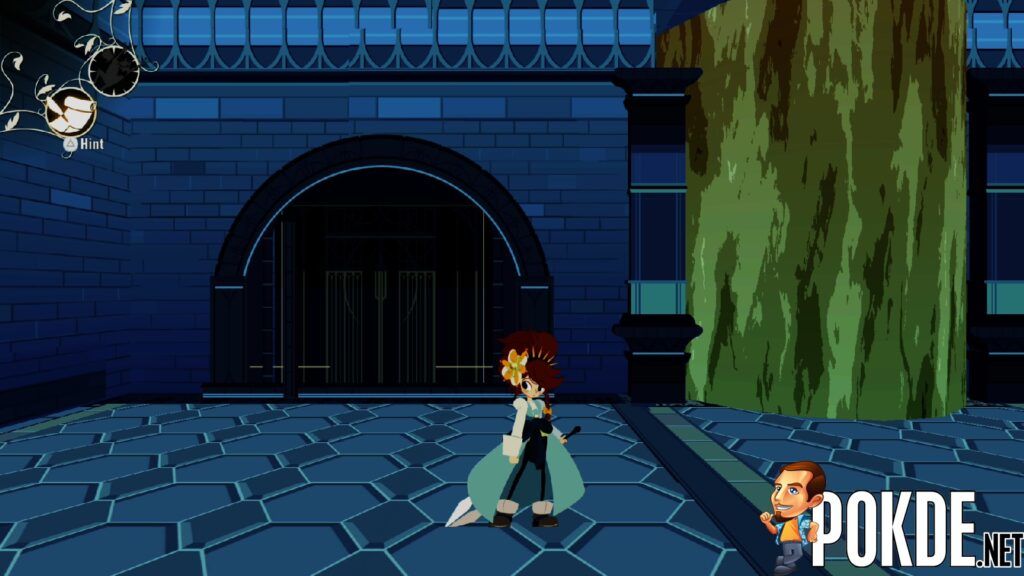 Cris Tales follow the story of Crisbell, an orphan girl from Narim Orphanage. As she was on an errand to pick up a rose for Mother Superior, the caretaker of the orphanage, it was snatched by a talking from named Matias. She eventually follows the frog to the Narim Cathedral, where her powers as a Time Mage awakened.

Since then, she has the ability to see and interact with the past, present, and future of the surroundings that she is in. While the past is mostly set, the future can still be changed depending on the actions of the present time. To understand her powers better, Matias escorts Crisbell to meet another fellow Time Mage, Willhelm.

Soon after, the village of Narim was attacked by goblins from the Empress of Ages who wants to take over the Crystallis Kingdom. After successfully pushing back the Volcano Sisters, Crisbell finds herself on a journey to figure out the truth behind the powers and see through to her destiny with her newfound abilities.

One of the Most Breathtaking 2D Visuals Ever 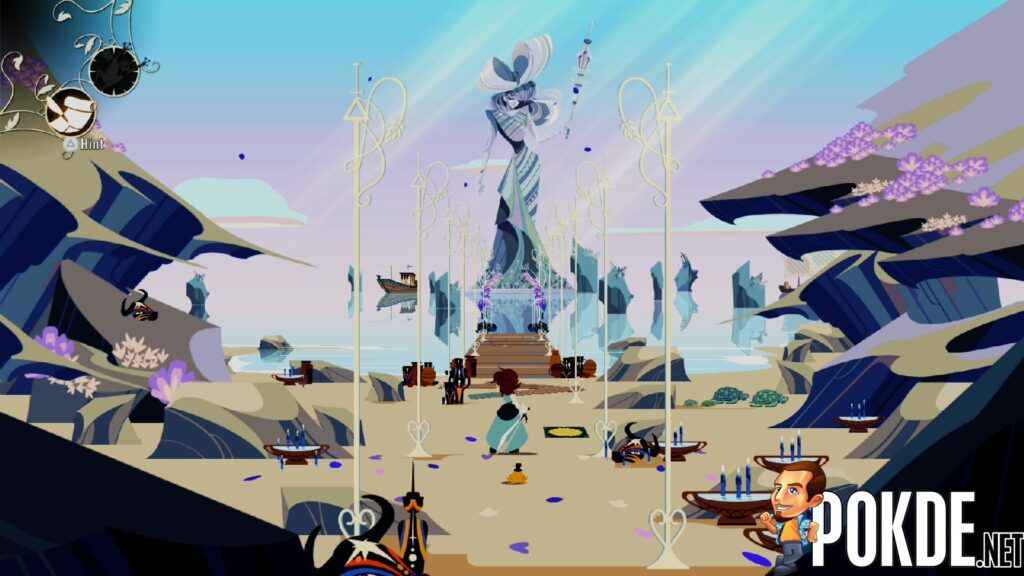 Cris Tales is an RPG featuring hand-drawn 2D animations set in a 3D-esque plane of movement, in the sense that you can move left and right, along with forward and backward. It’s not your cutting-edge realistic 3D graphics but it’s certainly one of the most unique and breathtaking visuals in any game thus far. It certainly benefits from being hand-drawn.

As far as the game goes, it’s essentially your typical classic JRPG like the early Final Fantasy games or Chrono Trigger, as you go from location to location to push the storyline forward. The basic formula here is that each location will have their own set of stories, NPCs with their own set of issues, and you will be there to solve them. 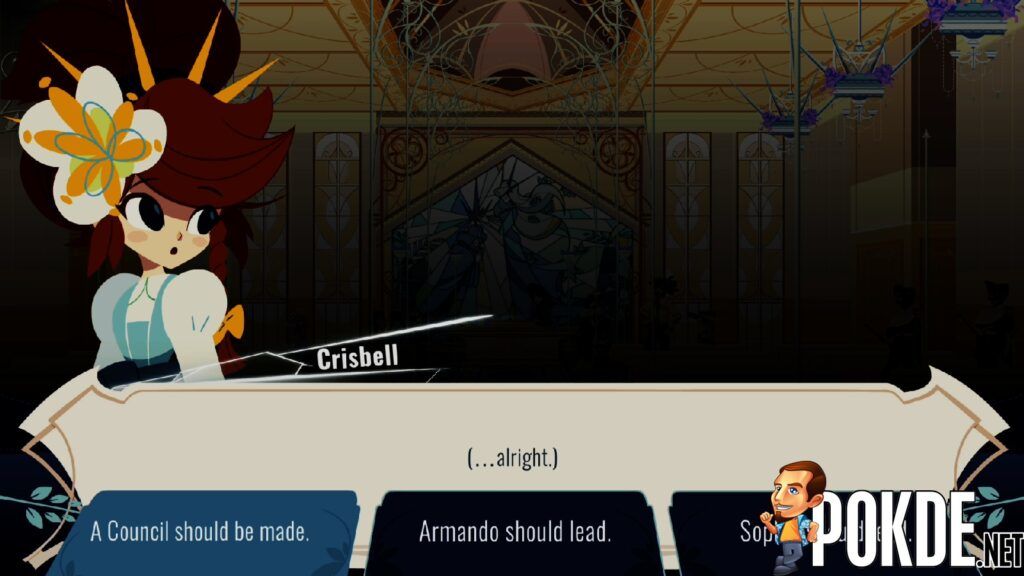 How you go about solving them, and this includes optional side quests, will determine how the story plays out. This includes having an extra choice as you reach the epilogue of an existing, which will usually provide the best ending. It’s also worth noting that there are a good number of side quests that can be permanently missed if you approach the final boss of the location, and a number of these are easy to miss.

It gives Cris Tales a relatively clear sense of direction but it also makes the gameplay rather linear. On the plus side, it makes it easier for achievement hunters to get a full 100% completion rate. Another issue I have with it is that due to how subtle the hints are for certain side quests, it can be frustrating for completionists who strive to get the best outcome from the start. You need to be patient and very thorough with the game.

Looking for another JRPG to play? Check out our review of Final Fantasy VII Remake Intergrade: INTERmission DLC by clicking right here. 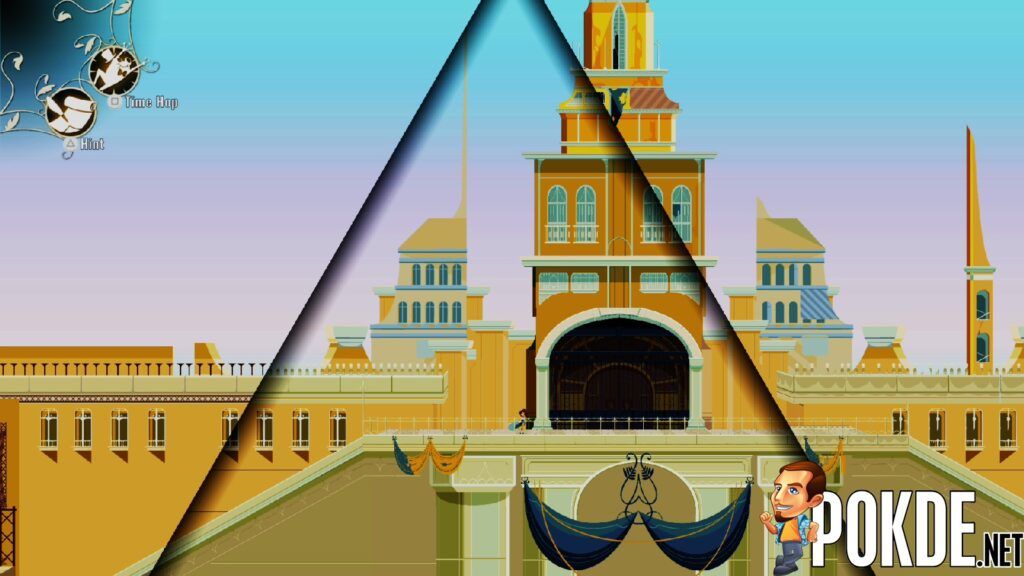 The primary thing that makes Cris Tales unique is the ability to manipulate time to some degree since the important characters in this game like Cris Bell are Time Mages. Very early in the game, Crisbell would allow her to see reality being fragmented; the left side seeing the past, the center being the present time, and the right side seeing the future.

It is especially interesting as it plays a major role in how you interact with the environment and overcome puzzles. For instance, one puzzle in St. Clarity will require you to find a way to climb into the sewer, which is out of reach. The solution is to plant a seed in the past so that a tall plant would grow in the present time, allowing you to easily climb upwards.

For the most part, these are pretty simple and just requires a bit of thinking outside the box as it’s a rather unconventional puzzle as far as JRPGs go. With that being said however, it certainly does feel like the developers are limited in the puzzles they do as having it too complicated could make it impossible for some gamers to progress. In other words, the puzzles are typically simple that it provides little challenge.

The time fragmentation isn’t limited to just world exploration as it also comes to play in battle, which brings us to the next part…

Adding Strategic Layer to a Tried and Tested Formula 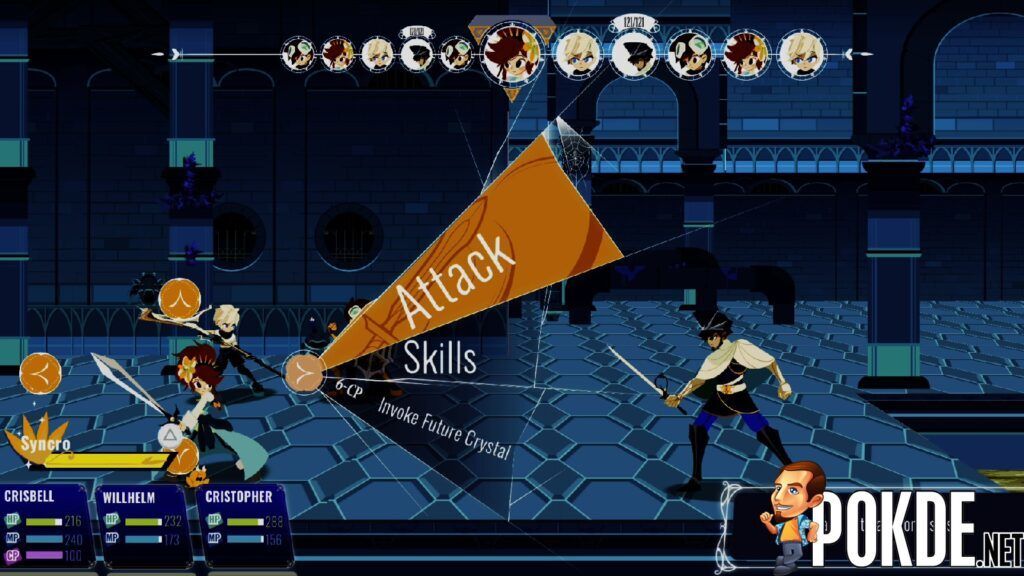 Cris Tales uses a classic turn-based combat system. The key difference here is that your party members are in the center of battle while the enemies can be on both left and right sides. For the most part, battles work exactly as you’d think they would; each character takes turns to initiate actions, you gain experience points after battle, and party members level up when there’s enough points.

These actions consist of standard attacks, skills, magic, use items, defend, your usual array of classic RPG actions. It’s worth noting each character has their specialty such as Crisbell being able to use her time magic, Cristopher as a sentinel / magic caster, and Willhelm focused mainly on magic. 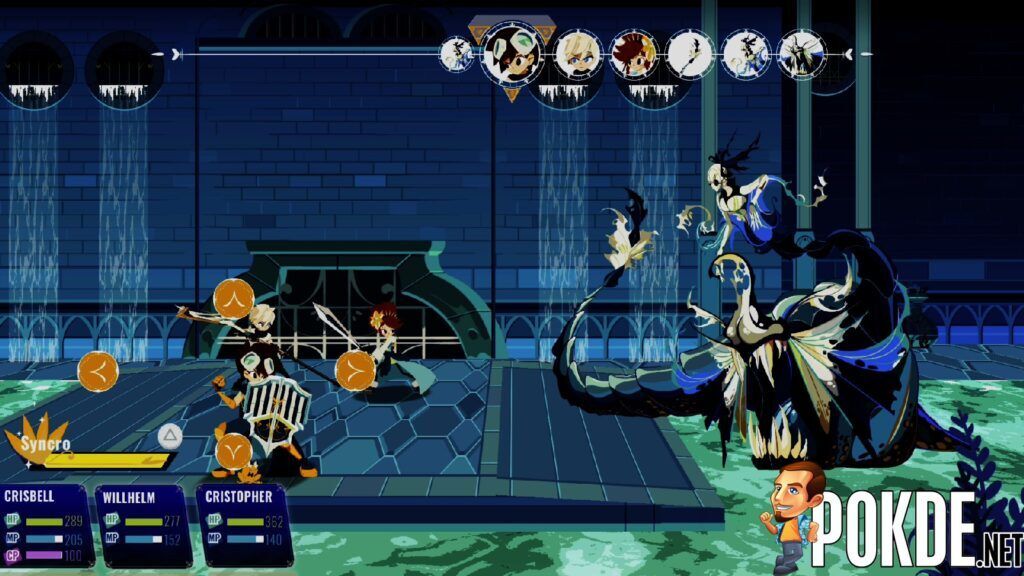 What makes the combat system rather cool is that you can use Crisbell’s Time Mage abilities to make certain abilities conjure faster / stronger. For instance, getting an enemy poisoned and then going fast forward into the future will let them take the full poison damage instantly. It adds an interesting layer of strategic depth to a tried and test formula.

Furthermore, pressing the action button at about the same time as attacks landing on enemies will result in bonus damage. Simultaneously, pressing the same button when enemy attacks land can help you take less damage. Personally, I love this added touch of interactivity as it reminds me of the same mechanic from Super Mario RPG on the SNES. However, adding haptic feedback with varying intensity depending on timing would make it feel more intuitive and enjoyable. 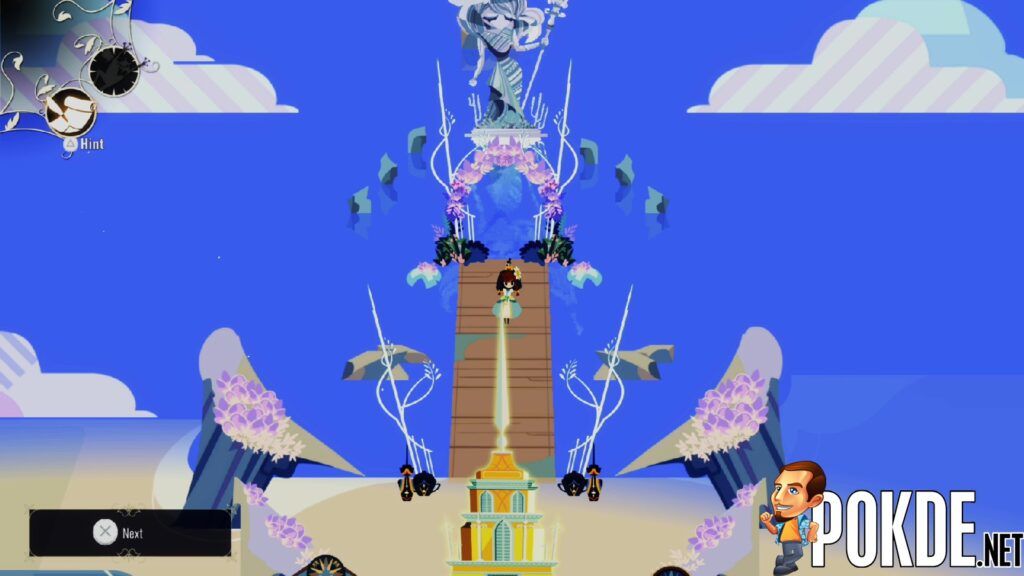 Cris Tales is a pretty fun RPG, especially for those who enjoy classic turn-based JRPGs. You get breathtaking visuals, an entertaining storyline, a decent variety of characters, and interactive combat elements. However, the combat system could be more intuitive, the game could use more content, side quests can be easily missed, and the game is relatively linear.

However, if you’re a fan of this genre, you should definitely get this game. At the end of our Cris Tales review, I award this game with our Silver Pokdeward.

Big thanks to Ripples Asia for sending us the game code for the purposes of this review.

Aiman Maulana
Jack of all trades, master of none, but oftentimes better than a master of one. YouTuber, video editor, tech head, and a wizard of gaming. What's up? :)
Pokde Recommends
Cris TalesDreams UncorporatedGamingindieJRPGMalaysiaMaximum GamesMirenadAndroidGamingMobileNintendoPCMRPS 4PS5Sony
MORE
Read More
3765 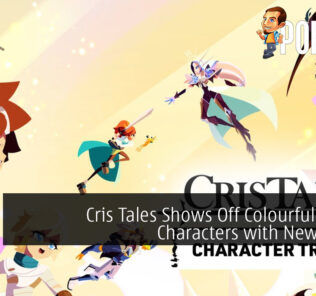