Samsung Galaxy S22 Plus Review – A Fine Balance in a Flagship 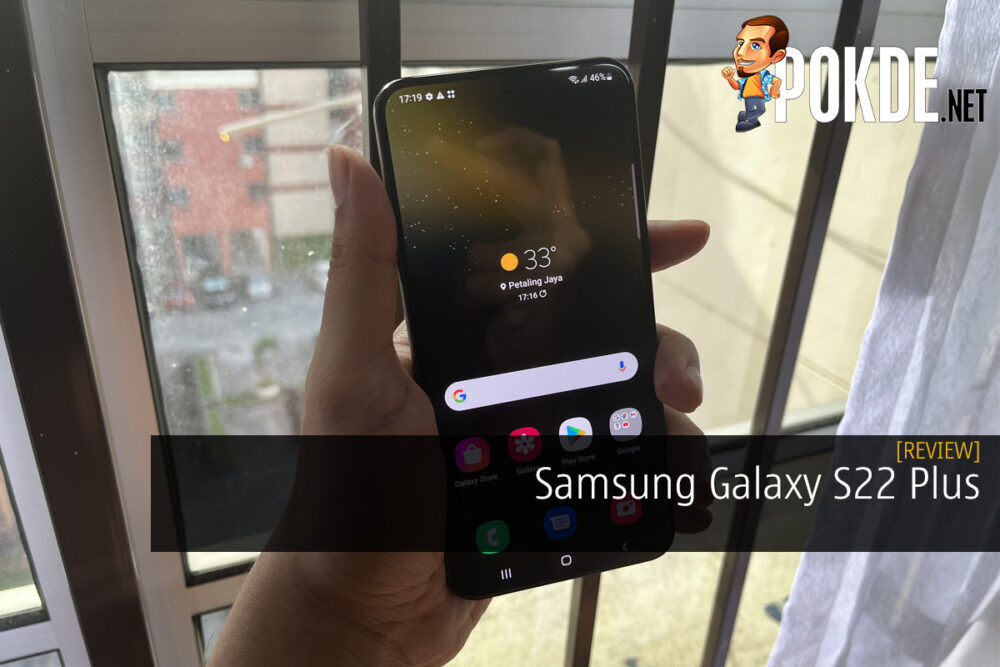 The newest flagship from Samsung is finally here, and for the first time in the Malaysian market, we're getting the Snapdragon variants instead for the mainline ones. Is the Samsung Galaxy S22 Plus worth the money? Let's find out.

The Samsung Galaxy S22 Plus may not be the top dog as far as the Korean giant's offering goes but it's still a worthy choice if you're not the kind of person who needs an S Pen.

We will not be starting our Samsung Galaxy S22 Plus review with the unboxing as our media review unit only came with just the smartphone. Just in case you’re wondering, the retail unit will still not come with a charger inside, so it should be the same as recent years. 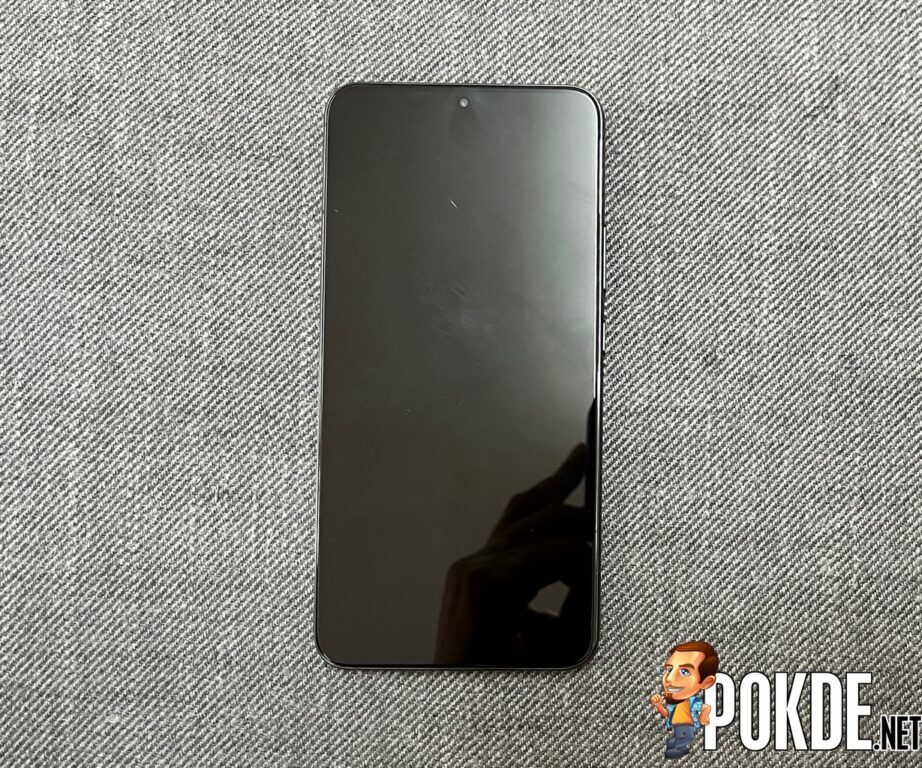 The Samsung Galaxy S22 Plus is largely unchanged from its predecessor, the Galaxy S21 Plus. If anything, it might mean more this time as it’s the highest end model that still follows the traditional Galaxy S Series design as the Ultra takes after the Galaxy Note. From the front, you have a 6.6-inch Full HD Dynamic AMOLED 2X Display with adaptive refresh rate up to 120Hz. You also have rounded corners, a flat display instead of a curved one, and very minimal bezels. 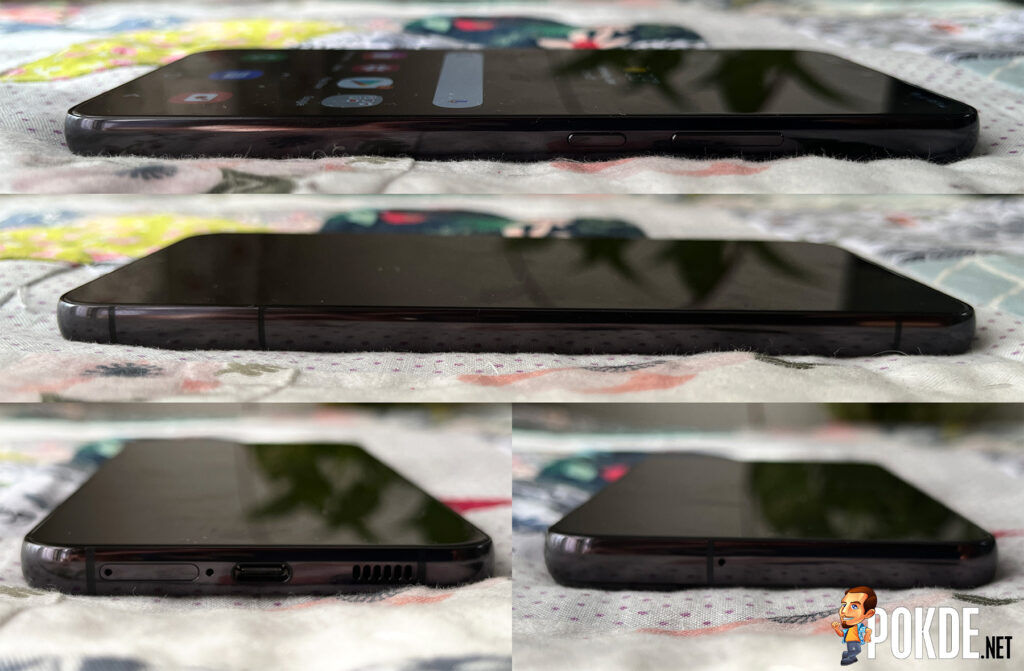 Moving to the top, you have two microphone holes. As for the bottom, you have the SIM tray slot, another microphone hole, a USB-C port, and a speaker grille. There’s nothing on the left side but on the right side, you have the power button and volume rocker. All of the sides have a glossy finish, which differs from the rear. 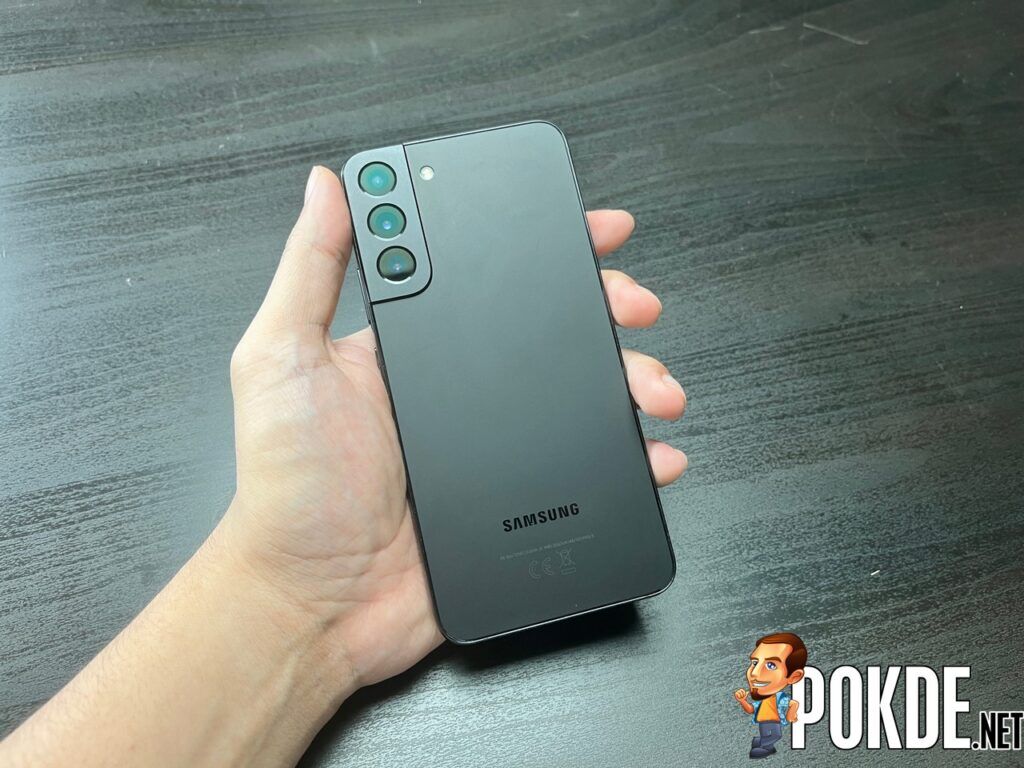 Flipping over to the rear, you have a look that’s similar to the recently launched Galaxy S21 FE with a matte black finish but with an improved Armor Aluminum. Unlike last year’s model, the contour cut camera housing matches the colour of the device itself so it no longer gives that two-toned look. It’s a shame they went for this since the predecessor’s one looks more attractive and premium. It’s also worth noting that you have Gorilla Glass Victus+ on both the front and rear, which further makes this feel more solidly built.

Overall, the Samsung Galaxy S22 Plus isn’t a big difference in terms of design, though the build quality has seen improvements over its already impressive predecessor. I also feel that missing out on the two-toned look is a missed opportunity for a more attractive device. Regardless, what truly matters is what’s inside the smartphone. 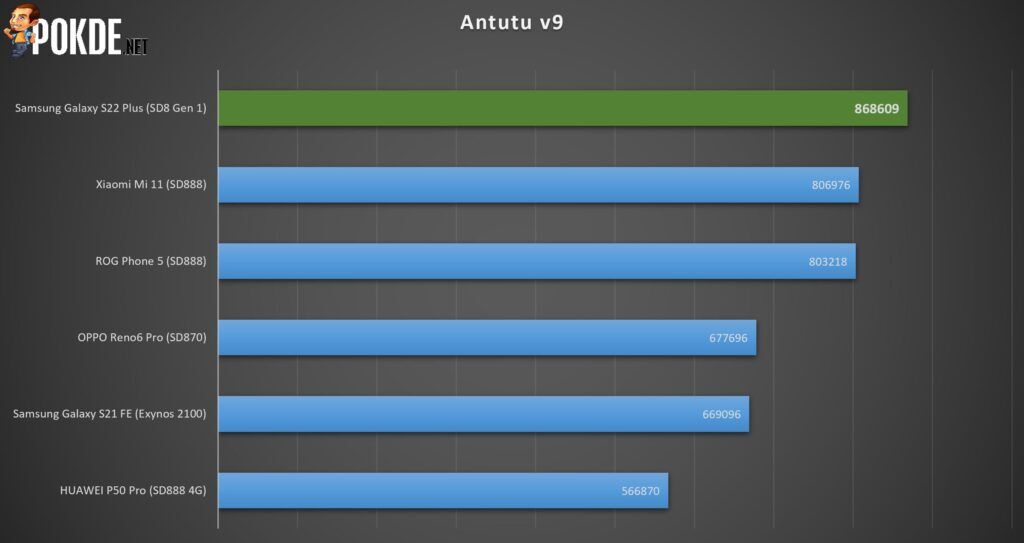 Kicking off the benchmark suite with Antutu v9, the Samsung Galaxy S22 Plus pretty much annihilated the competition as it took the top spot in our list of benchmarked devices. It’s also worth noting that this is the first Snapdragon 8 Gen 1 device that we reviewed, so we’re expecting other smartphones powered by the chipset perform around the same level. 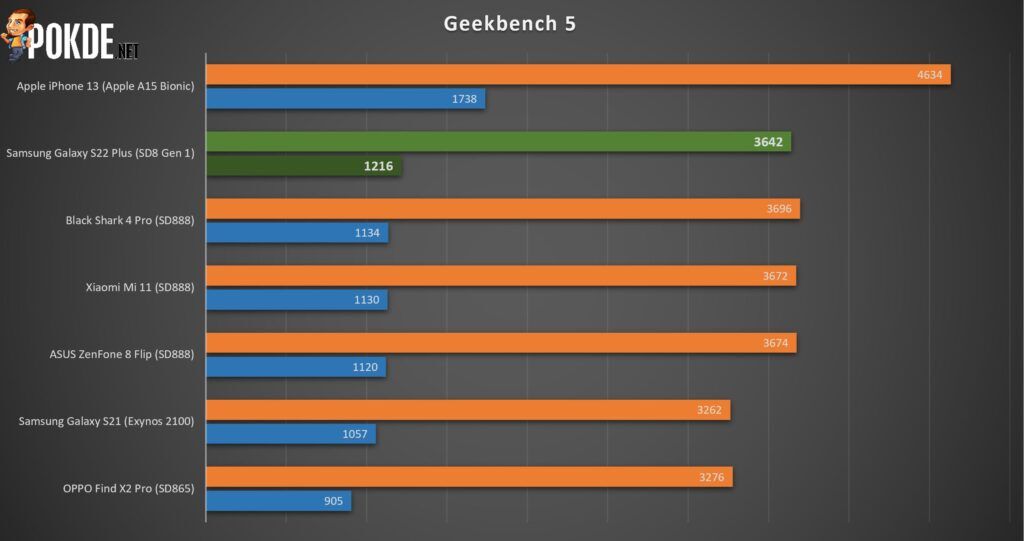 In Geekbench 5 however, the multi-core score seems to be on par with the Snapdragon 888, though the single core is marginally better. That being said, it’s nowhere close to the Apple A15 Bionic chip, but the high number it managed to achieve still means that it’s has powerful processing capabilities. 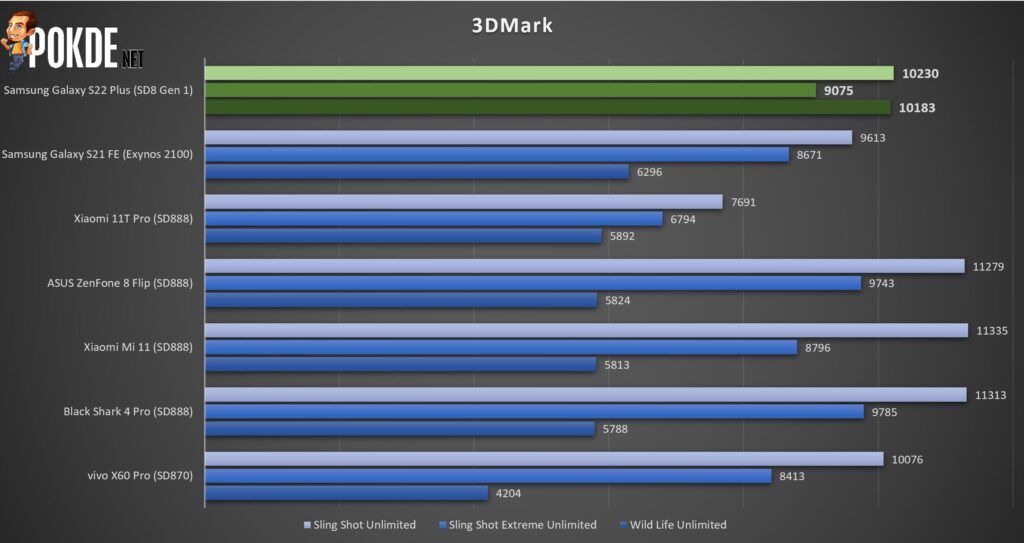 Moving on 3DMark, it’s interesting to see that it had the highest score in Wild Life Unlimited, though it didn’t achieve much higher in both Sling Shot benchmark tests. There is a chance that this may be due to some thermal issue, if it’s not API-related, as the Wild Life Stability Test puts it at 45.2%, meaning the performance dropped as it continued to run the test over a longer period of time. 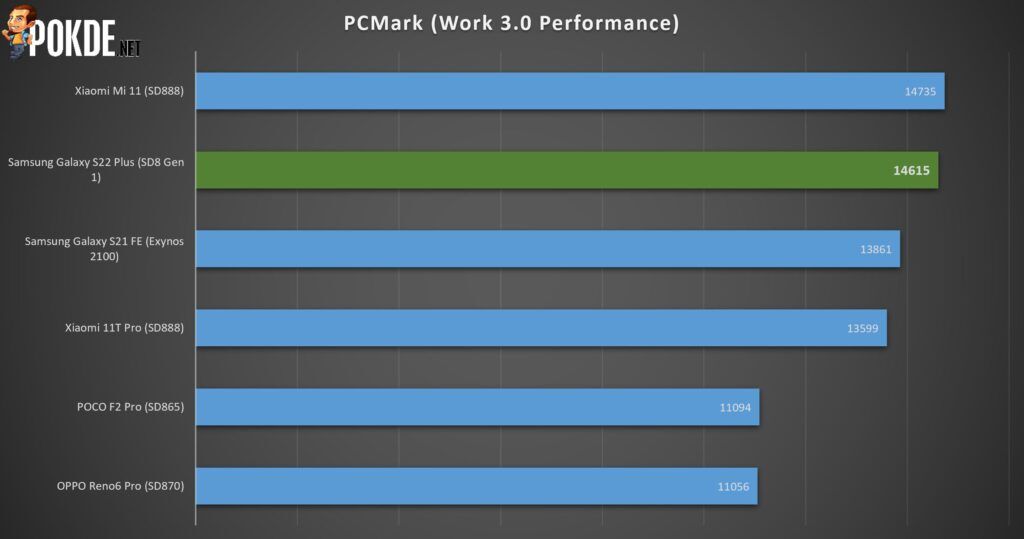 Lastly on PCMark’s Work 3.0 benchmark, the Samsung Galaxy S22 Ultra managed to get the 2nd highest spot in our list of benchmarked devices. If the thermal issue could be solved, we do believe that it could be higher, as the device was rather hot by the end of the test. 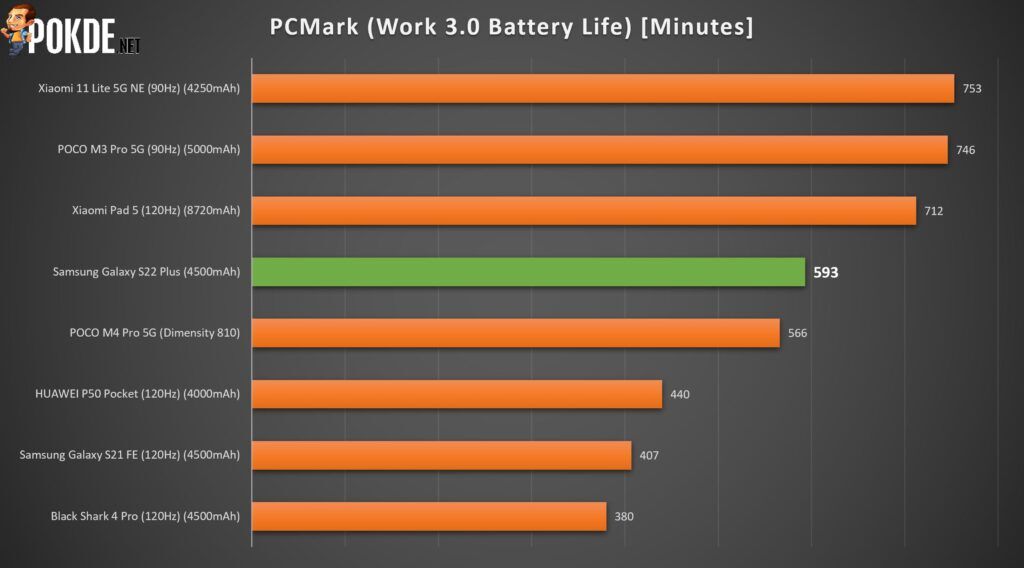 As for battery life, the Samsung Galaxy S22 Plus with its healthy 4,500mAh battery managed to last 9 hours and 53 minutes (593 minutes) in the PCMark Work 3.0 endurance test. This is with adaptive refresh rate setting enabled, which should provide you with the best battery life possible while still maintaining the buttery smooth display. As for personal use, I am a light-to-medium user that mostly relies on social media, YouTube Music, texts and calls, and I find myself only charging it once every two days, which is great.

Not sure if it’s worth getting this or the Galaxy S21 FE? Click right here to compare it. 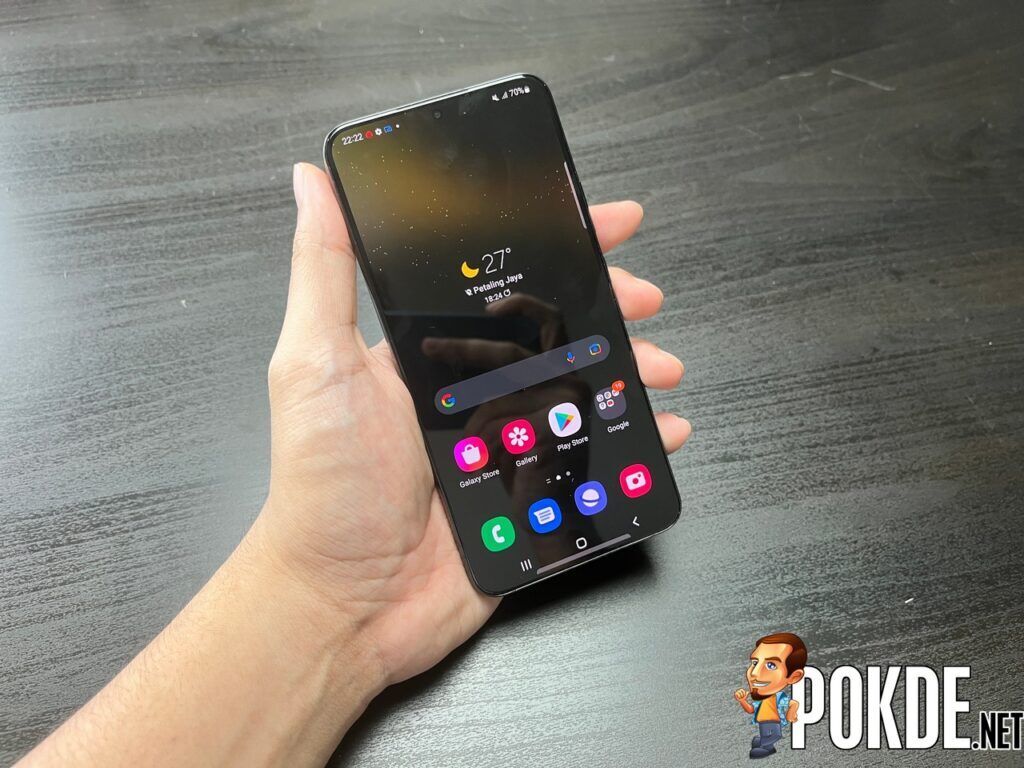 The Samsung Galaxy S22 Plus uses a 6.6-inch Full HD+ Dynamic AMOLED 2X display with adaptive refresh rate up to 120Hz. With the exception of a slight size difference, it’s pretty similar to its predecessor as it’s capable of displaying excellent colours with good dynamic range and contrast. It still uses the same punchhole camera cutout and the screen is bright enough to be easily used under direct sunlight, peaking at 1750 nits just like the Ultra variant. 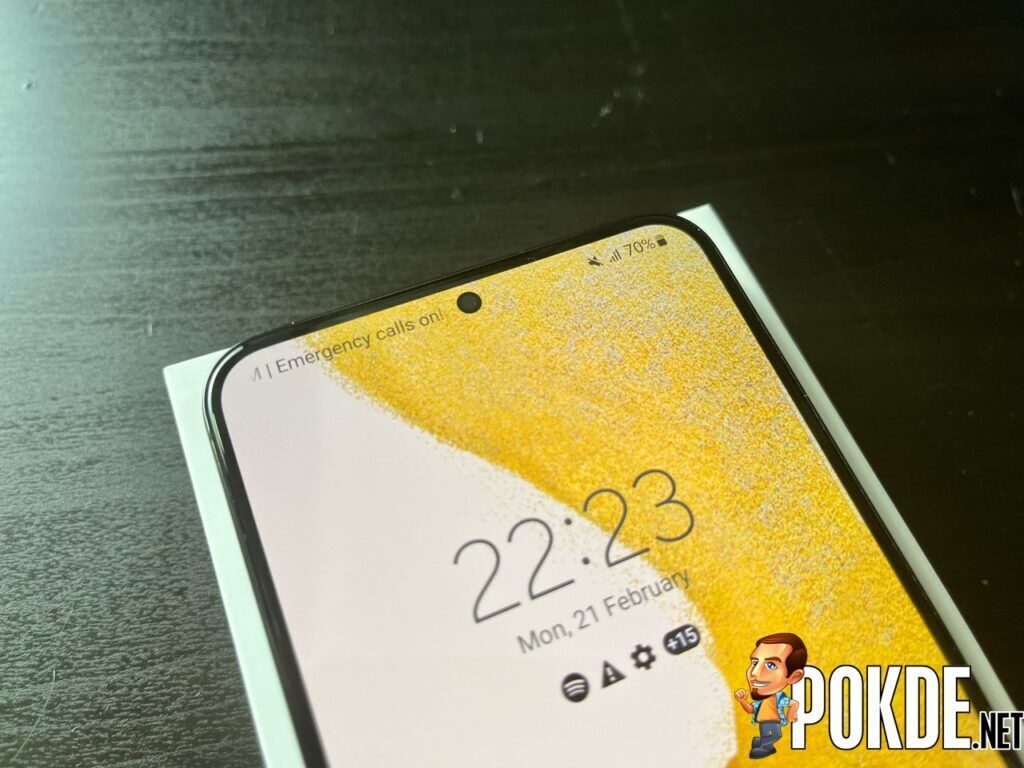 Once again, adaptive refresh rate is here and it goes from 48Hz to 120Hz, which is great because you can enjoy buttery smooth transitions and it will cut it down when it’s not needed so you can save on battery life. You also have Gorilla Glass Victus+ for added protection. Apart from that, the display features Eye Comfort Shield which is said to reduce strain and fatigue with reduced blue light emissions.

Like its predecessor, the Samsung Galaxy S22 Plus has a matte finish, which means that it’s a lot less susceptible to fingerprints. Interestingly, it does have feel like the build quality has been improved as it feels more solid than its predecessor. Once again, it’s a shame that the two-toned look has gone away in this iteration but then again, the matter of liking this or not is subjective so that’s fine. 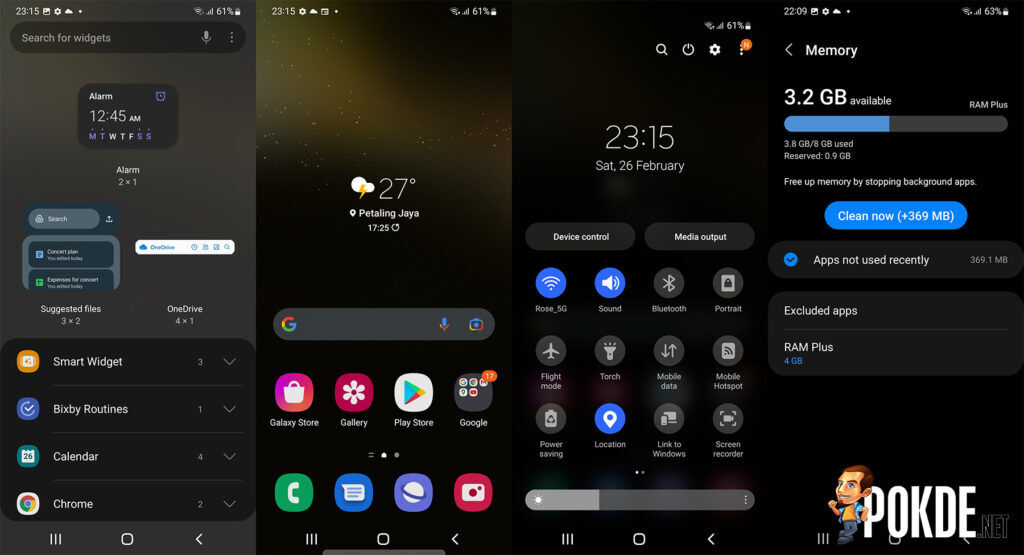 The Samsung Galaxy S22 Plus is running One UI 4.1 based on Android 12. For the most part, it doesn’t look different from the previous version but it does introduce a slew of new updates. This includes an improved RAM Plus that lets you go past the 4GB limit up to 8GB, adding virtual RAM using your internal storage. Apart from that, the native calendar sees the addition of smart features and there’s better integration with Microsoft apps. Generally, you can expect a better, richer experience compared to before while still retaining its smooth, user-friend user experience.

Gone are the days of the slow under-display fingerprint scanners from the 20-series as the Samsung Galaxy S22 Plus essentially solidified its speed and accuracy. It’s fast, reliable, and generally problem-free as I’ve yet to face a single failed reading of my fingerprint except when my hands are wet, which is to be expected. 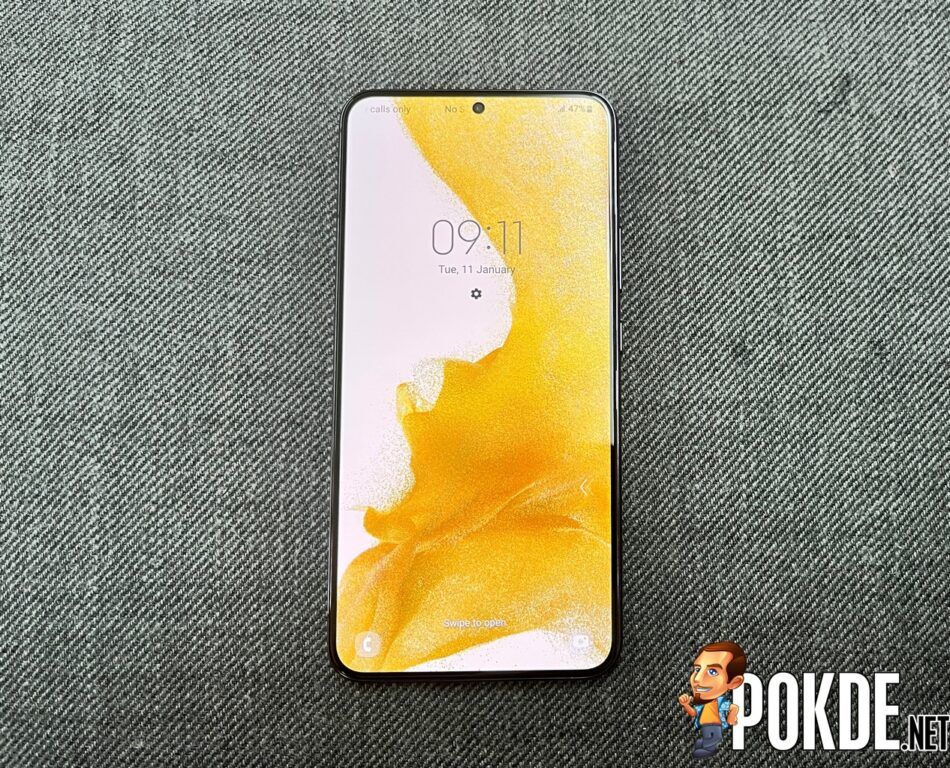 While using the smartphone, the Samsung Galaxy S22 Plus can get hot at certain times, such as when during initial setup, using the camera extensively, and playing mobile games. That being said, it seems to be lesser after about a week of using, which I find odd at first. I believe this is the AI technology working behind the scenes to optimize the device. Regardless, due expect some heat while using this for the more intensive tasks as the Snapdragon 8 Gen 1 is known for some thermal issues. 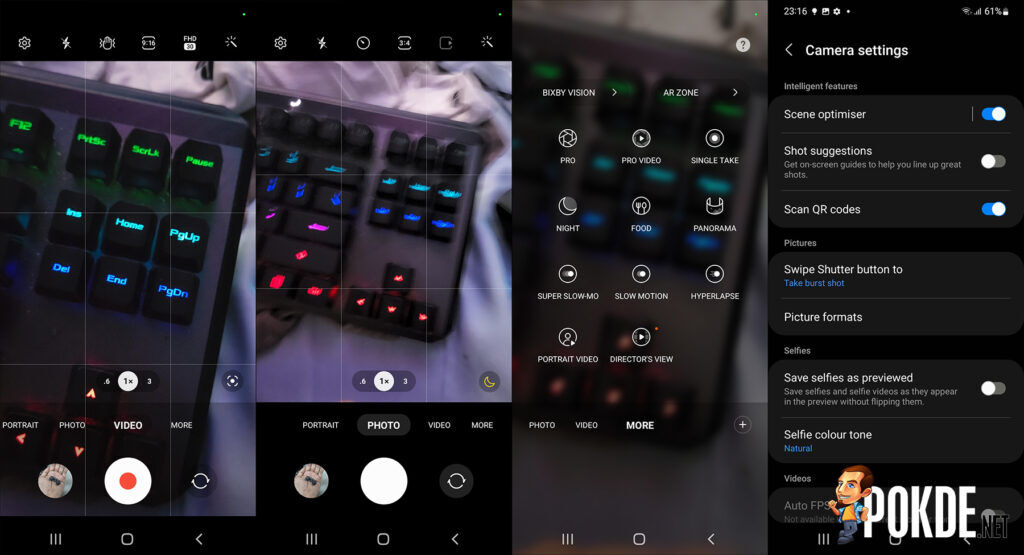 The native camera UI on the Samsung Galaxy S22 Plus looks essentially similar to the one from the we’ve seen in recent Samsung devices. It’s user-friendly so most consumers won’t have trouble with it, and it’s more viable for mobile photographers and videographers who want more control of what they capture. There’s a good variety of shooting modes you can make use of including Single Take, Super Slow-Mo, Director’s View, and more. The app will also automatically optimize the shots you’re about to take based on what the AI understands the subject in frame.

Unsurprisingly, the Samsung Galaxy S22 Plus really managed to nail it with the cameras. Most pictures come out with excellent colours and dynamic range, with no focusing issues unless you’re too close to a subject. Both the telephoto and ultrawide cameras have seen improvements in focusing and visual quality, with the former being much easier to take a stable shot while looking less like an oil painting and the latter having a wider dynamic range, but it’s still a step below the main camera. 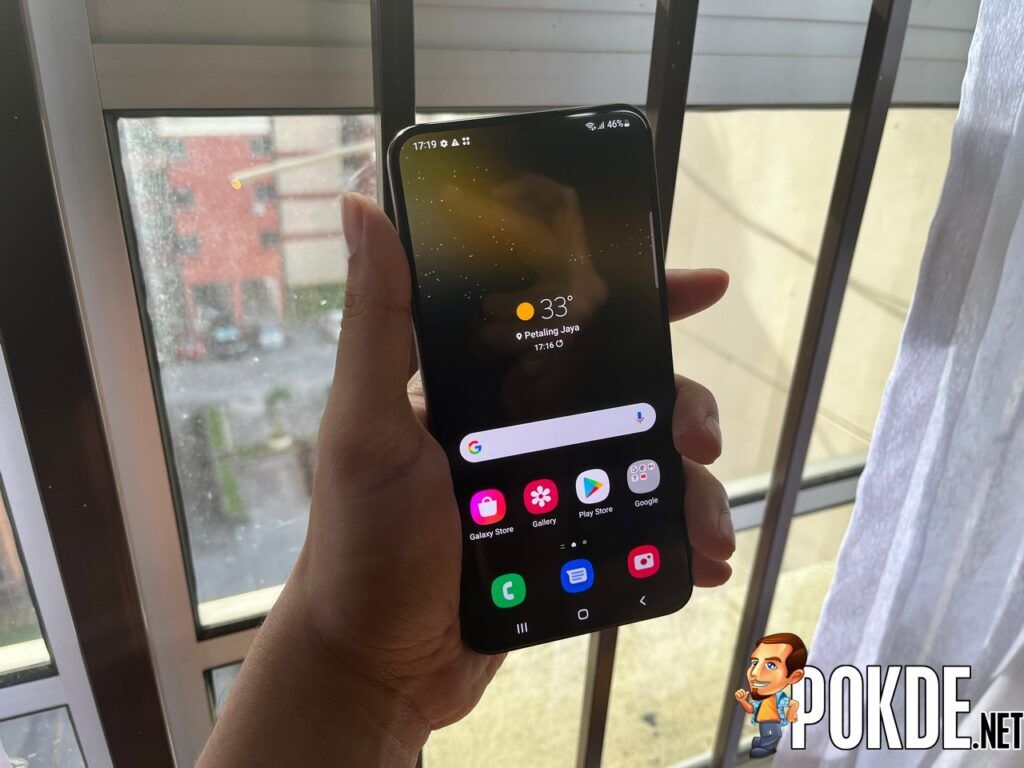 The Samsung Galaxy S22 Plus may not be the top dog as far as the Korean giant’s offering goes but it’s still a worthy choice if you’re not the kind of person who needs an S Pen. This is basically a well-rounded smartphone that can pretty much do it all, whether it’s for productivity, gaming, or an on-the-go camera. If you can afford its retail price of RM4,099, this can definitely serve you well. If you are coming from the Galaxy S21 Plus, you may want to hold off on next year’s model or the Ultra variant to truly feel a difference.

At the end of our Samsung Galaxy S22 Plus review, I award this smartphone with our Gold Pokdeward.

Big thanks to Samsung Malaysia for sending us this smartphone for the purpose of this review.

Aiman Maulana
Jack of all trades, master of none, but oftentimes better than a master of one. YouTuber, video editor, tech head, and a wizard of gaming. What's up? :)
Pokde Recommends
AndroidgadgetGalaxy S22 PlusIP68MalaysiaOne UIQualcommreviewGadgetReviewSmartphone
MORE
Read More
663