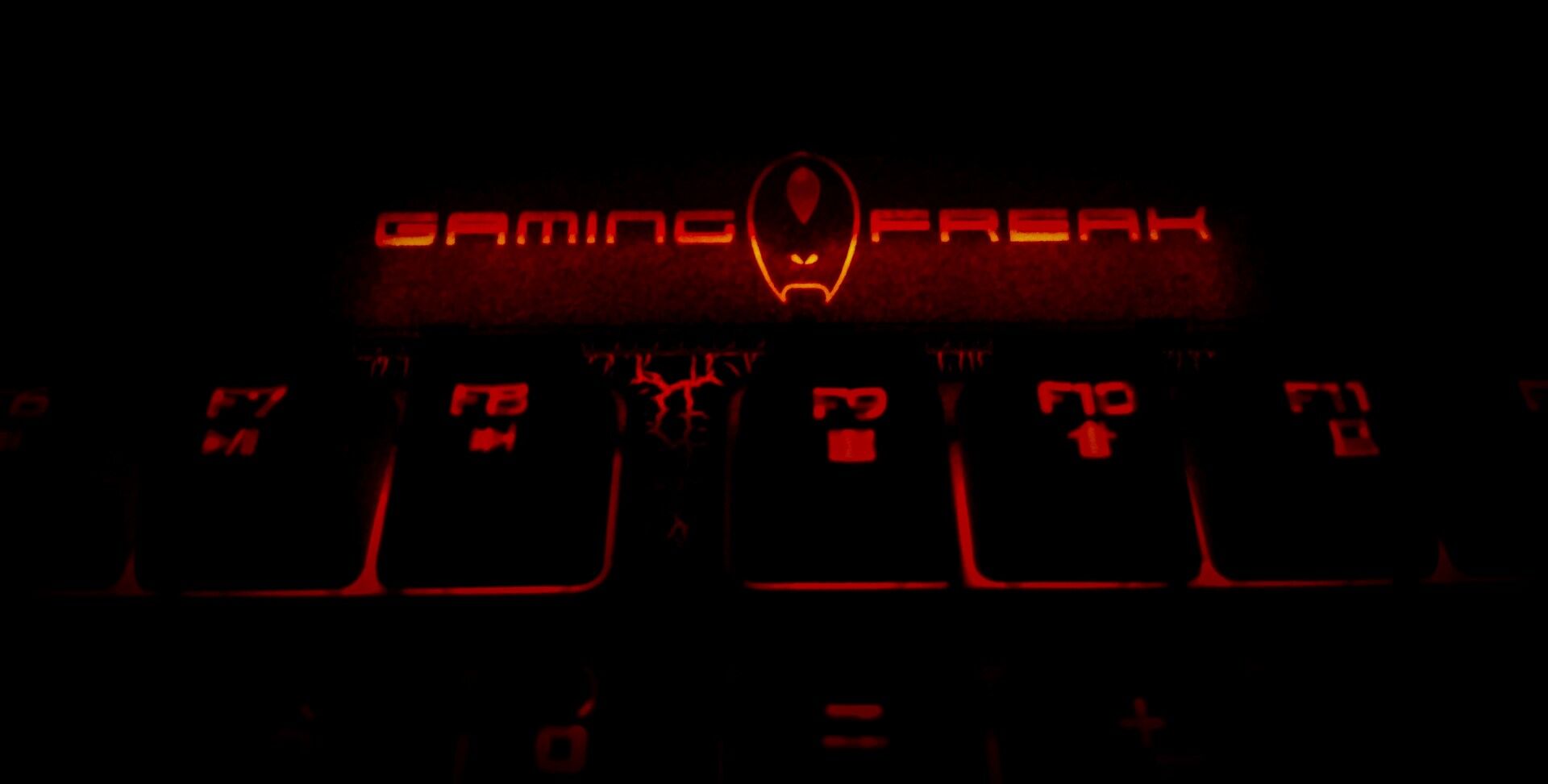 The AVF Gaming Freak GK2 is the latest membrane-based gaming keyboard from AVF. It looks damn cool, but is it as good as it looks? Let’s find out in our review.

People always say don’t judge a book by its cover, but I think the cover is a very good indicator of what you are getting. So in our case,  let’s start with the packaging the keyboard comes in. And pardon me for judging it by the box, it looks like a pretty impressive keyboard. 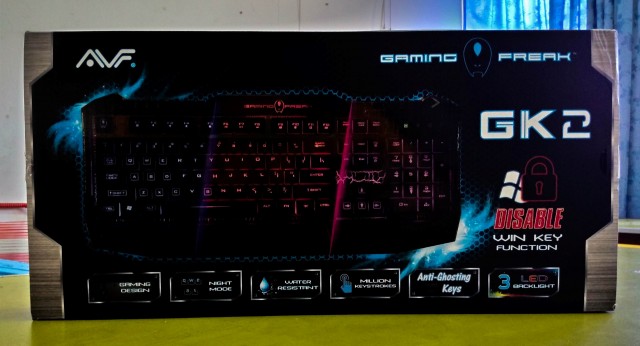 The front has a nice illustration of the keyboard within, and some of the main features of this keyboard. 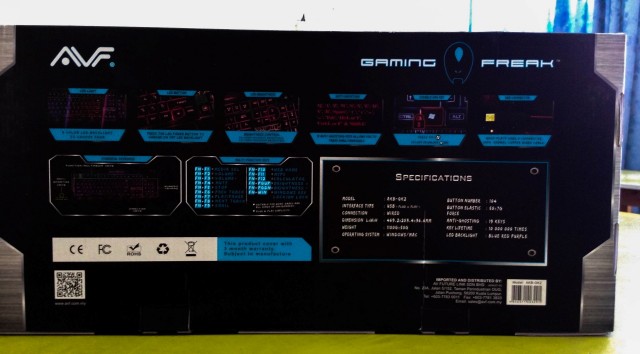 The rear has more details about the features and a small specification list. From the spec list we find out that this keyboard has anti-ghosting support for up to 19 keys. That’s more keys pressed than all my fingers are capable of so we will just take their word for it. But there is a condition for the 19-keys anti-ghosting, which we will go into further detail later. The keyboard is held within the box by two foam supports on each side, and wrapped in a soft foam wrap. The keyboard should be well protected enough to go through the duress of shipping and some more undamaged.

The texture of the keyboard shell is really unique with it’s creased or cracked appearance. Will definitely draw a few extra glances at any LAN party you attend. The finishing does show if you have oily hands. The overall shape of the keyboard doesn’t appeal to me as I prefer minimalism, but it will have its fans. There is a palm rest but I just can’t rest my palms on it simply because it is too short for me. The weight might be a problem (1100g) if you intend to take it to LAN parties frequently or simply travel a lot, but it does lend an air of toughness to the keyboard. The keys are all usual sized and do not cause any trouble for me migrating over from a CM Storm Quickfire TK. The surface of the keys are also have a nice feel to them, although I would prefer a clearer print of the keys. If you notice, some keys have the letter encased in a square. Those are the keys that make up the 19 anti-ghosting keys. We think the anti-ghosting keys include most of the keys used during gaming and one will not be left wanting for more anti-ghosting key when even some mechanical keyboards are limited to only 6KRO.

Along the bottom you can see several holes which serve to drain the keyboard in case you spill your drink on it. There is a hexagonal pattern which reminds me of Crysis. The feet are a bit short considering the thickness of this keyboard, and they only raise the top edge keyboard about 1cm higher. 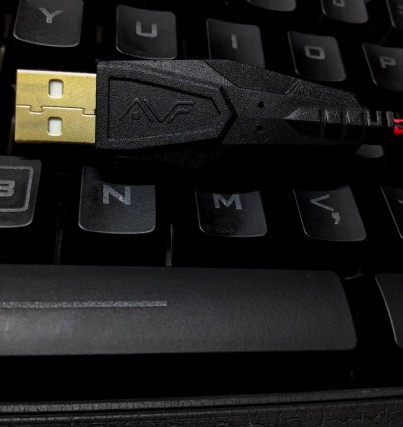 The USB connector is gold-plated. 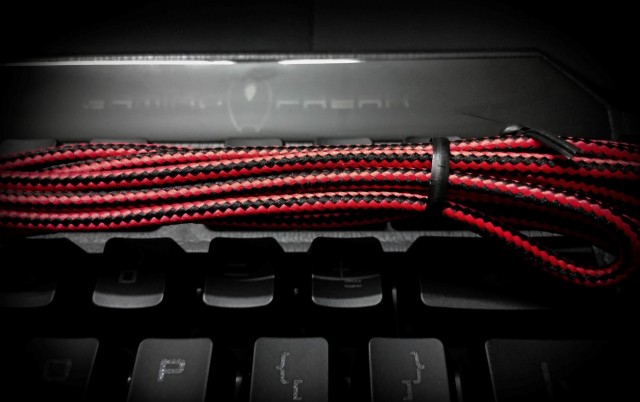 The cables are sleeved in red and black. The tight weave of the sleeve imparts a feel of quality and looks like it will withstand a lot of abuse before breaking. Too bad it isn’t detachable though. On the bright side, the strain relief on the keyboard end seems pretty sturdy.

The lighting on the AVF Gaming Freak GK2 is so amazing I have to dedicate a whole section of the review just for it. So we have three colors, blue, red, and purple. All three colours won’t be glaringly bright and distract you from the screen, but in case it does, there are 3 levels of brightness to choose from. I think red is the dimmest among the three colors. It’s barely visible in a bright room. Too bad that’s my favourite backlight colour :( 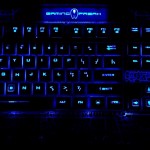 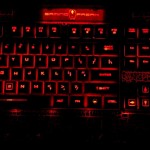 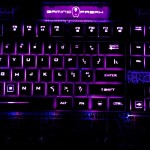 All three colours. Which is your pick? Too bad there isn’t a pink backlight for the girl gamers among us. Or the more girly among the guys. *cough cough*

These are how the palm rest lights up. The rest of the keyboard also has lighting like this but it’s most obvious at the palm rest area. It just ramps up the aesthetics of this keyboard to another level. Especially with the red colour backlighting, it looks just like the surface has cracked and red-hot magma is flowing between the cracks. 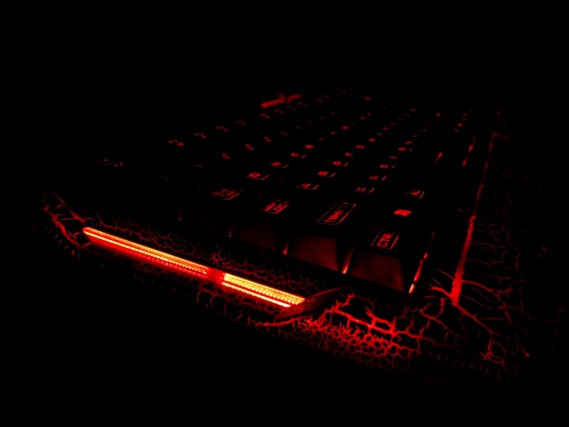 Along the sides of this keyboard are light bars which look awesome in the dark. But it’s a pity that it is not visible from the front. So people near you will be the ones enjoying this feature. 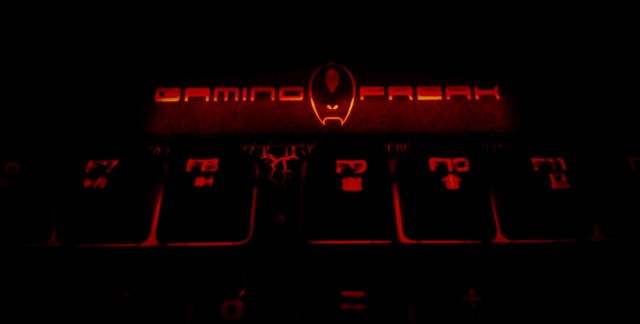 At the top of the keyboard there is a small panel that lights up with the Gaming Freak logo. Pretty.

Besides the usual constant backlight, the keyboard can also pulse through it’s 3 colours. Here’s a gif of it going through the colours. A tiny niggle with the backlight is that it doesn’t remember the colour or mode you put it in before turning off your PC or unplugging it. It will default back to the brightest level of blue each time you turn on your PC. Not a big problem though considering that it’s really easy to change the colour, mode or preferred brightness.

Of course the best test for a gaming keyboard is gaming. Key response is spot on and never felt like it was unable to keep up with me. Anti-ghosting works as advertised. No misfires due to wrong or accidental keypresses. It suffices to say that it works very well for gaming. However after some time I noticed the rather stiff space bar. It’s quite a lot stiffer than the other keys. The rest of the keys are softer but there won’t be any accidental key presses with this keyboard. The tactile feedback is also excellent. The noise of hitting the keys is not intrusive and serves as an audible feedback for you to know you pressed a key. The small angle of tilt is also rather uncomfortable to me over extended periods of usage, mainly due to the wrist rests being unable to support my wrists and I have to rest my wrists on the edge of the table. Added on with the thickness of this keyboard, it is quite uncomfortable to use. 5mm of key travel is just about nice and won’t be too short like laptop keyboards. The keyboard stands its ground and doesn’t budge an inch against furious key presses during the most heated gaming sessions thanks to generous rubber grips on the bottom of the keyboard. The row of multimedia keys accessible with the Fn key is convenient for consuming media on your PC. There is even a shortcut for the calculator (Fn + F12).

This keyboard really looks good, and is a very good gaming keyboard aside from some minor issues with the ergonomics of the wrist rest and tilt. You should try it for yourself at the store as everyone has different sized hands before splashing money on it. Speaking of money, it won’t make a huge hole in your pocket with a very reasonable RRP of RM89. Currently it doesn’t seem to be on sale at any online retailer yet. For more detailed specifications of the GK2 feel free to visit http://www.avf.com.my/avf.php?c=65&p=1990. 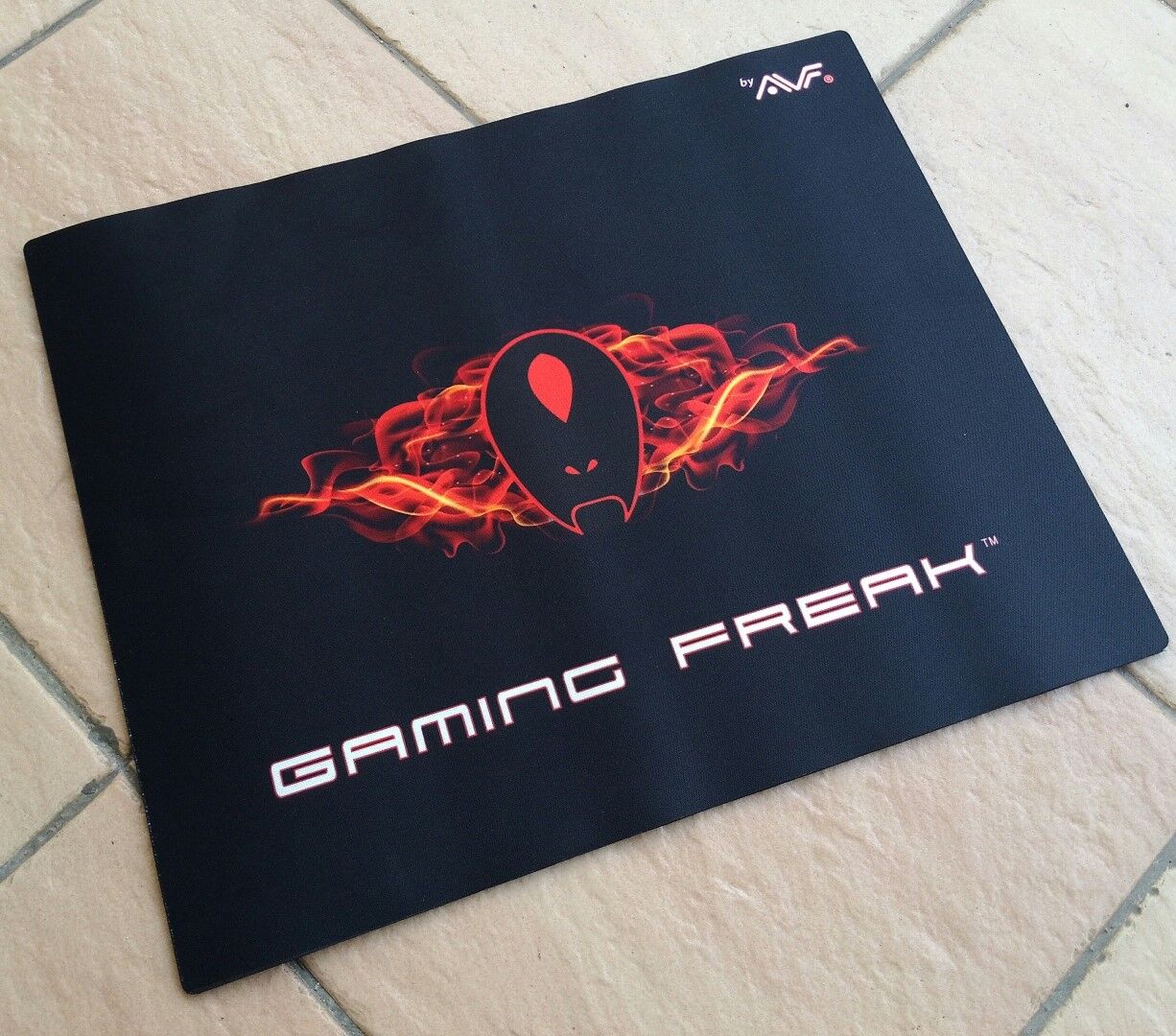 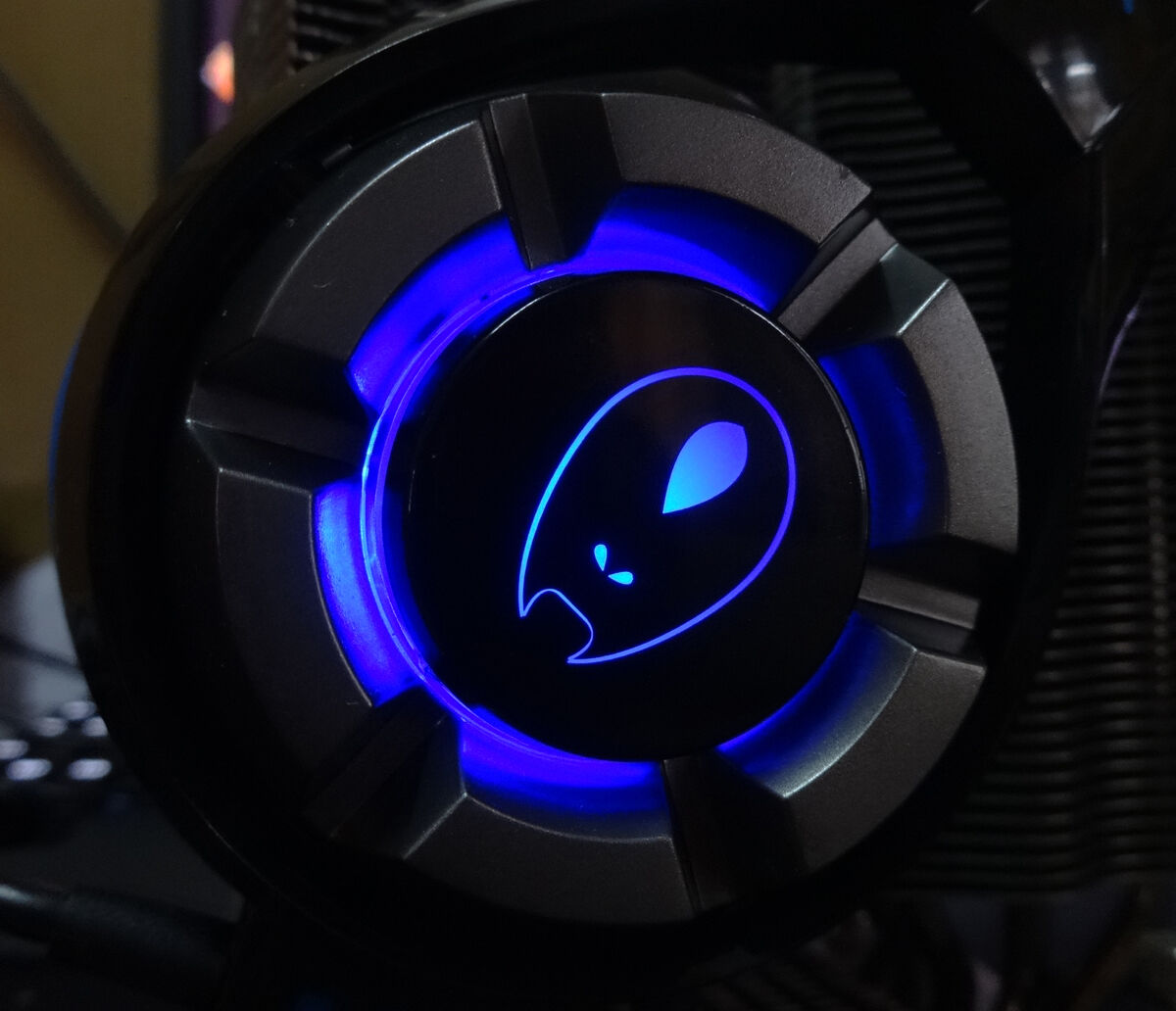 Getting bored of your smartphone?
Latest Video
Read More
853