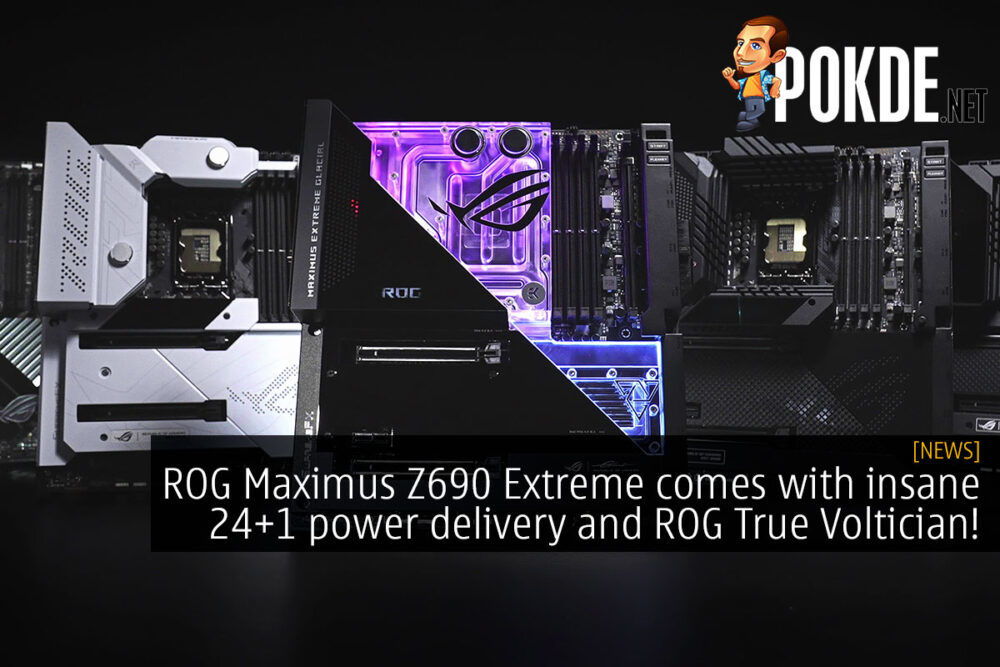 ASUS has announced a whole slew of Intel Z690 motherboards under their ROG Maximus Z690 and ROG Strix Z690 families. With the 12th Gen Intel Core processors bringing the cutting-edge hybrid architecture, DDR5 memory and PCIe 5.0 support, these motherboards are designed to be the ultimate option for gamers and hardcore enthusiasts.

The first user-friendly innovations available on most of the ROG Maximus and ROG Strix Z690 motherboards is the PCIe Slot Q-Release, which lets you unlatch your graphics card with a simple push of the button. Gone are the days of trying to wiggle a thin tool between the large M.2 heatsink and the backplate of the graphics card to undo the latch! All of the boards here also feature support for LGA1200 cooler mounting points, so you don’t have to switch out your cooler, if you don’t have a LGA1700 cooler. 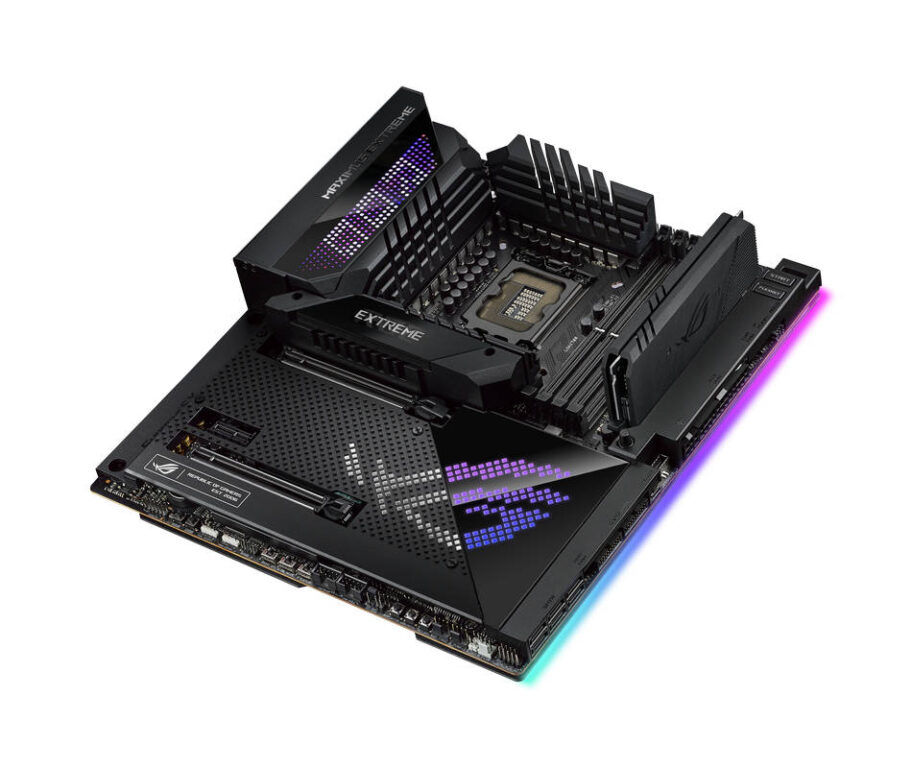 ASUS has never slacked when it comes to making their ROG Maximus Extreme motherboards, well, truly Extreme. The ROG Maximus Z690 Extreme is no different, packing a whopping 24+1 teamed power architecture, ready for anything you can throw at it. The VRM is cooled by large cold-forged aluminum heatsinks.

On top of that, you have OptiMem III for exceptional memory stability, even when pushing extreme overclocks on the latest DDR5 memory. You also get ASUS Extended Memory Profiles, which are tuned profiles to help you squeeze out more performance from the DDR5 memory, even if you are relatively inexperienced with memory overclocking.

Setting the ROG Maximus Z690 Extreme from most other motherboards out there is the new AniMe Matrix LED display, that’s actually in color, so that’s a step above the ROG Zephyrus G14’s monochrome AniMe Matrix panel. The ROG Maximus Z690 Extreme also comes with the ROG True Voltician, a USB oscilloscope that lets you monitor your voltages, clock speeds and more in further detail. You can even connect another PC to to it to diagnose your system more effectively. 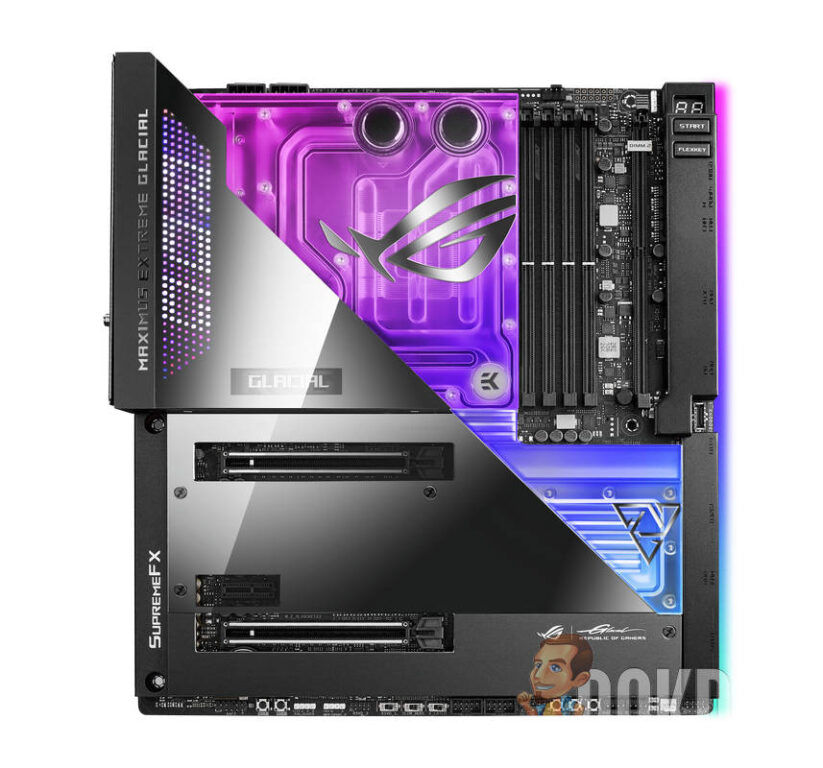 For liquid cooling enthusiasts, the ROG Maximus Z690 Extreme Glacial swaps out the huge heatsinks for a beautiful monoblock developed in partnership with EK. The lower half of the motherboard is covered by a stunning electroplated heatsink with a luxurious finish. And the most interesting part is that for M.2 drive upgrades, you don’t even need to remove the heatsink thanks to a new inverted slot mechanism. 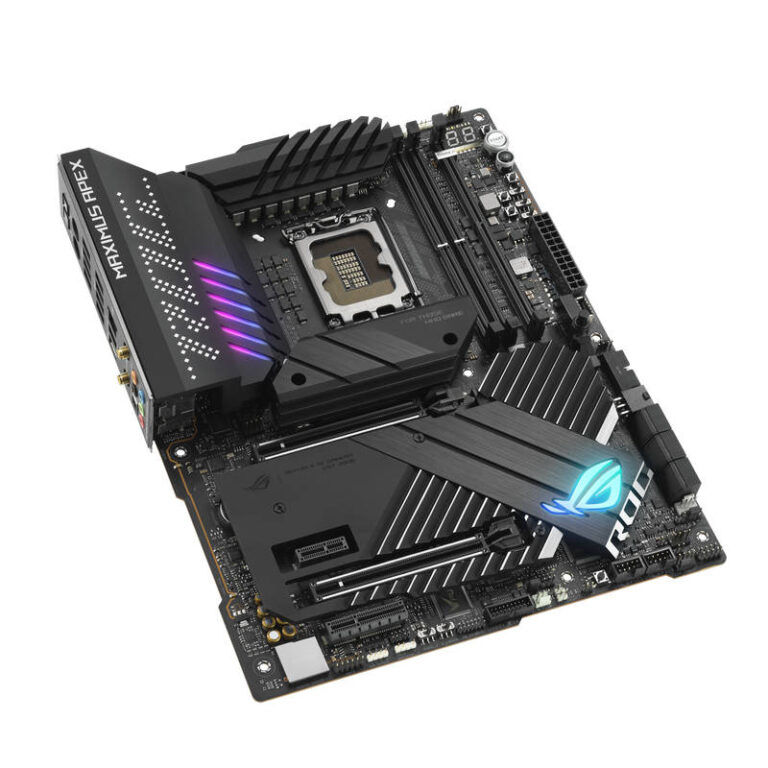 While the ASUS ROG Maximus Z690 Extreme packs just about all the best innovations that ASUS has in their arsenal to satiate the hardcore enthusiasts, the ROG Maximus Z690 Apex is designed with a simple goal in mind: breaking records. The ROG Maximus Z690 Apex cuts the number of DIMM slots down to two, which allow it to offer unmatched signal integrity, promising speeds of up to 6600MHz. Other key overclocking features include Slow Mode, LN mode jumper, multiple thermal sensor headers and eight Probelt measurement points.

The ROG Maximus Z690 Apex also bears the distinction of being the only motherboard aside from the ROG Maximus Z690 Extreme and Extreme Glacial to come with the ROG True Voltician. I mean, it would be amiss to not equip it with the absolute best in monitoring, right?

While it is a motherboard intended to push the limits of overclocking with LN2 and other exotic cooling solutions, it doesn’t mean that ASUS is sacrificing other key features that will help you take advantage of the 12th Gen Intel Core processors. ASUS still ships the ROG Maximus Z690 Apex with a DIMM.2 card and a ROG Hyper M.2 card, for a total of five M.2 slots. 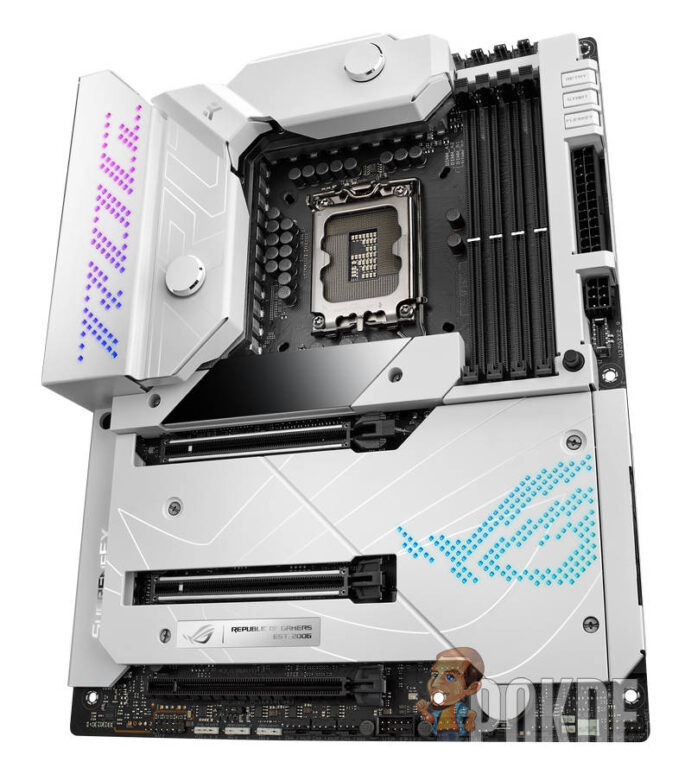 ROG fans who preferred white builds had to be content with the ROG Strix A-series motherboards for the past few generations, but not this time. The ROG Maximus Z690 Formula adopts the Moonlight White colorway, combining white, light gray and brushed metal finishes for a unique aesthetic. As customary of the ROG Maximus Formula motherboards, the CrossChill EK III heatsink developed in partnership with EK helps keep the 20+1 power delivery system happy, be it whether you are connecting it to a custom liquid cooling loop, or just relying on air cooling.

The ROG Maximus Z690 Formula gets a simple touch of RGB that is pretty reminiscent of the ROG Phone 5, but you also get the LiveDash OLED 2 display for some convenient system monitoring. The ROG Maximus Z690 Formula comes with the latest connectivity options, WiFi 6E, 10GbE, USB 3.2 Gen 2×2, Thunderbolt 4, and of course, PCIe 5.0 and an ample 5 M.2 slots, two of which are on the bundled ROG Hyper M.2 card, making it the perfect platform for some truly over-the-top PC setups. 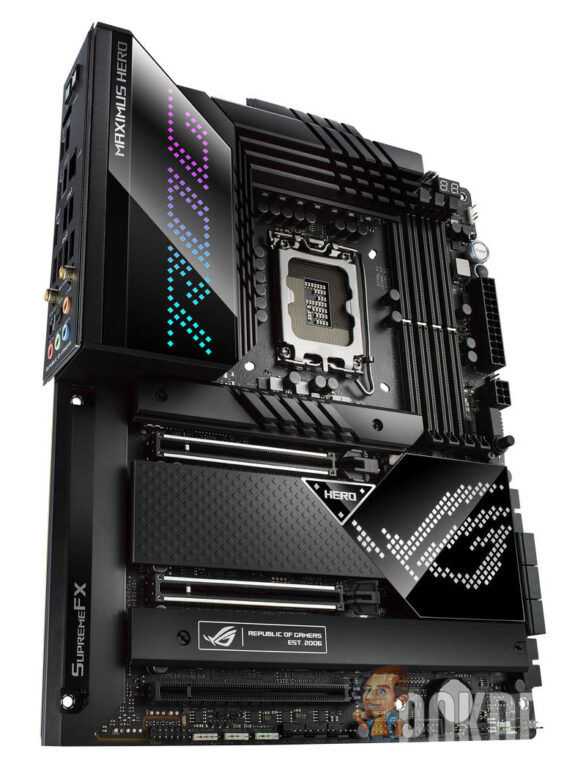 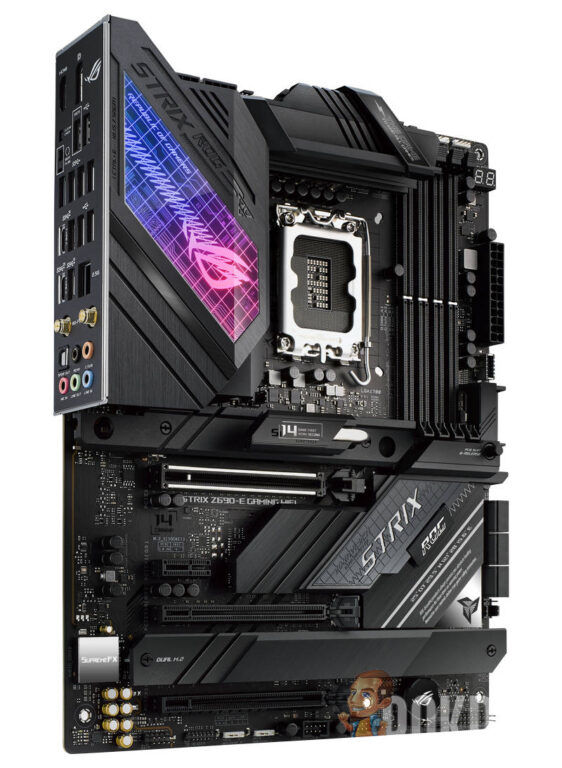 For the ROG Strix Z690-E Gaming WiFi, ASUS bumped down the power deliver to 18+1 powerstages, which is still a huge upgrade from last-gen. This is cooled by two aluminum heatsinks linked by an L-shaped heatpipe. Even the PCIe 5.0 M.2 slot gets a heatpipe as a part of the ASUS Combo-Sink design, improving the heat dissipation of next-gen SSDs. And it even comes with a ROG Hyper M.2 card to give you more room for additional PCIe 4.0 SSDs.

In terms of features, you aren’t losing out on much either. For connectivity, you get WiFi 6E, Intel 2.5GbE, HDMI 2.1 and USB 3.2 Gen 2×2 Type-C. Along with that you get a Savitech SV3H712 DAC, as well as the whole suite of AI features that ASUS offers with their motherboards, like AI Overclocking, AI Cooling, AI Networking and Two-Way AI Noise Cancellation. 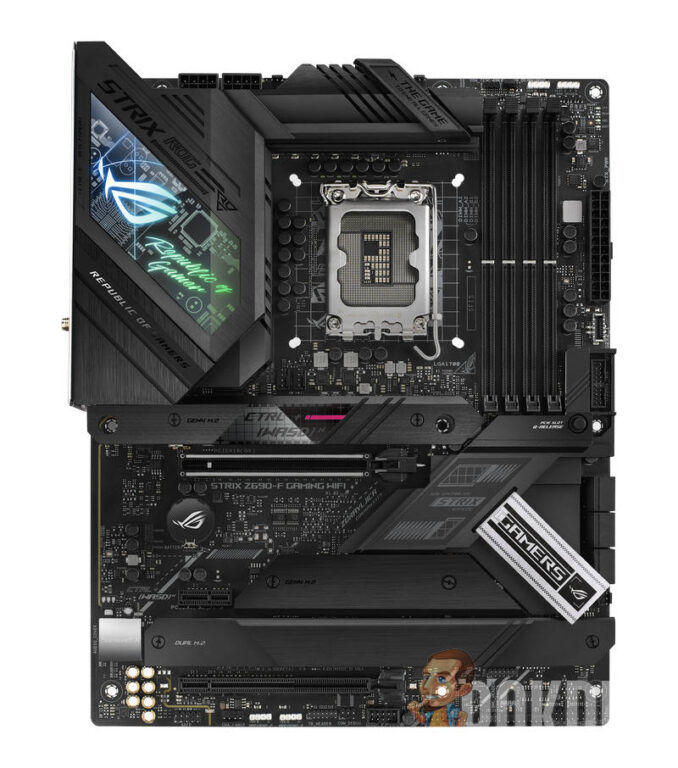 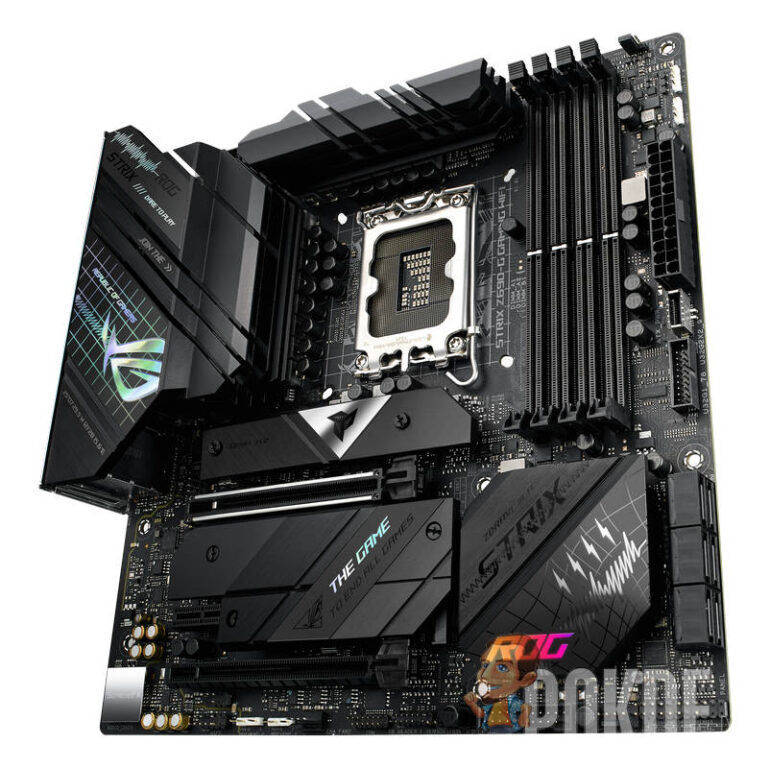 The ROG Strix Z690-G Gaming WiFi gives mATX enthusiasts a premium option. With a 14+2 DrMOS VRM design, the Z690-G Gaming WiFi is ready to tackle any 12th Gen Intel Core CPU with ease. You also get the full suite of connectivity options shared with its bigger brethren, including HDMI 2.1, WiFi 6, Intel 2.5GbE and USB 3.2 Gen 2×2 Type-C. The audio chops of this board is also powered by the Savitech SV3H712 DAC, with DTS Sound Unbound taking care of the software end of things. 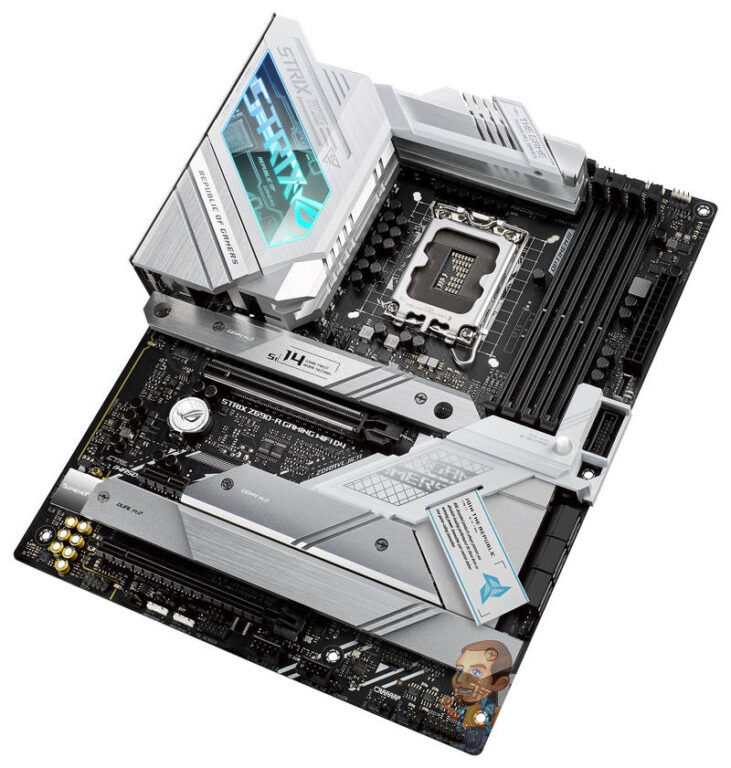 The ROG Strix Z690-A Gaming WiFi D4 stands out from the other boards here not only with its Moonlight White aesthetic, but also its support for DDR4. The ROG Strix Z690-A Gaming WiFi D4 is the only ROG board to support DDR4, giving gamers the option to reuse the memory from their older builds to lower the overall cost of upgrading to the 12th Gen Intel Core platform.

With 16+1 DrMOS powerstages rated for up to 80A, as well as the full suite of features like WiFi 6, Intel 2.5GbE, HDMI 2.1, USB 3.2 Gen 2×2 and four M.2 slots, the ROG Strix Z690-A Gaming WiFi D4 is going to be a prime choice for those who do not think the premium associated with DDR5 memory is worth their while. 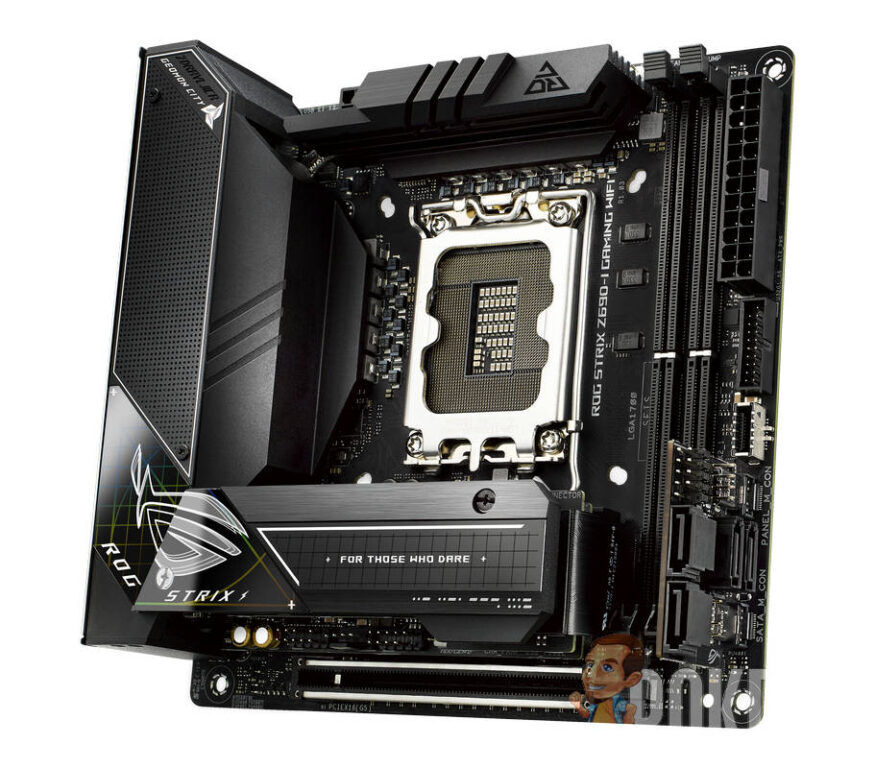 To still offer all that but in the constraints of the ITX form factor, the ROG Strix Z690-I Gaming WiFi packs a triple-decker heatsink that houses two M.2 slots, along with a ROG Strix Front Panel SATA Card, packing four SATA ports, front-panel headers and one ARGB Gen2 header, in addition to the other rest of the RGB and ARGB headers available on the board itself. This is also the only ROG Strix board with two Thunderbolt 4 ports for vastly expanded connectivity.

Pokdepinion: Sign me up for that ROG Strix Z690-I Gaming WiFi! 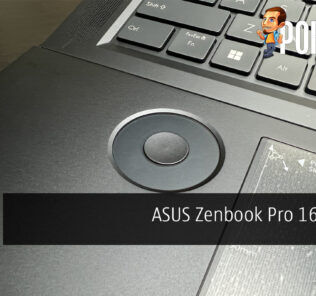