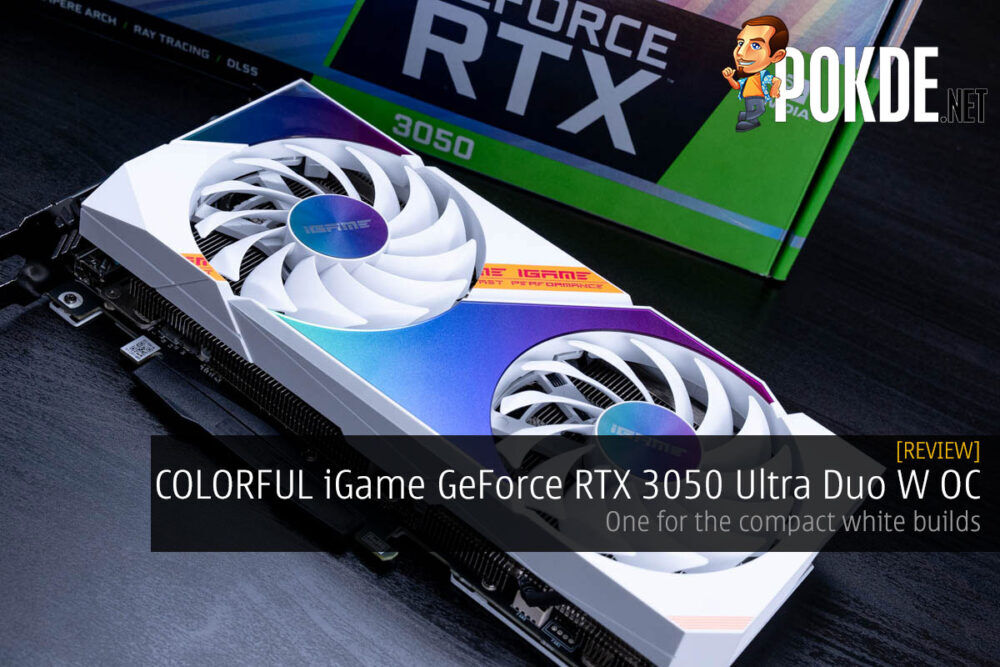 The COLORFUL iGame GeForce RTX 3050 Ultra Duo W OC is a pretty decent graphics card, and is probably especially of interest for those looking to build a compact white build, given its simple yet effective dual-fan cooler, and easy One-Key OC functionality.

For a compact white build, this is quite the perfect match.

COLORFUL is probably pretty well-known for their bang-for-buck graphics cards, with a smattering of higher-end options like the Vulcan and uber-premium Kudan series, which are often times more exciting than the flagship cards you get from the more popular brands. But today we aren’t going to be looking at those just yet, as we will be looking at the middle-of-the-pack, COLORFUL iGame GeForce RTX 3050 Ultra Duo W OC. It looks pretty decent, with a nice overclock slapped onto the GeForce RTX 3050. 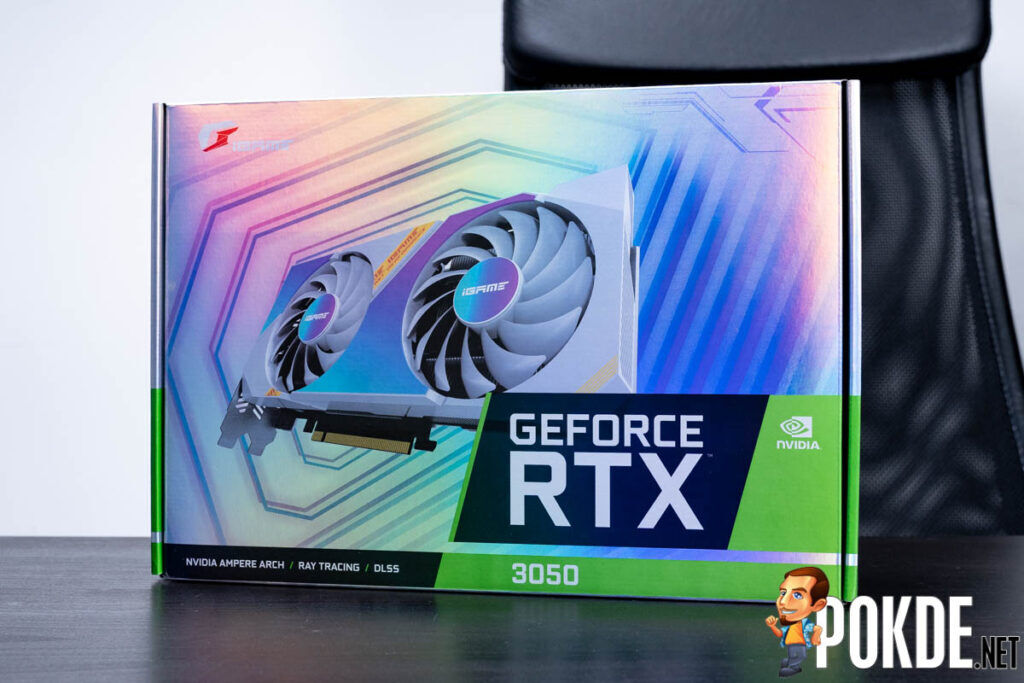 I guess this is the fanciest packaging I have seen, with a flashy holo finish applied across the box. You get a good look at the card here, and it seems that COLORFUL took some liberties with NVIDIA’s guidelines and made the “GeForce RTX” area not fully opaque, with the graphics card peeking under it. 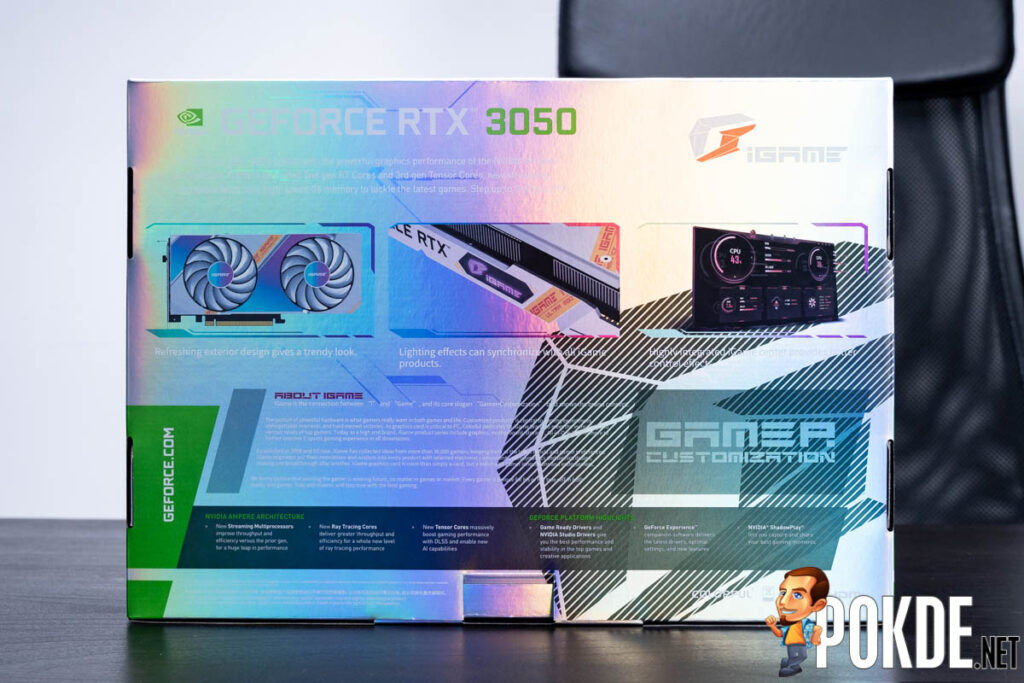 Over on the back we have the bright flashy finish, but it doesn’t work quite as well with all the white text. It’s legible, but you will have to twist the box around to read the entirety of the text. I think black text would have been more easily visible? 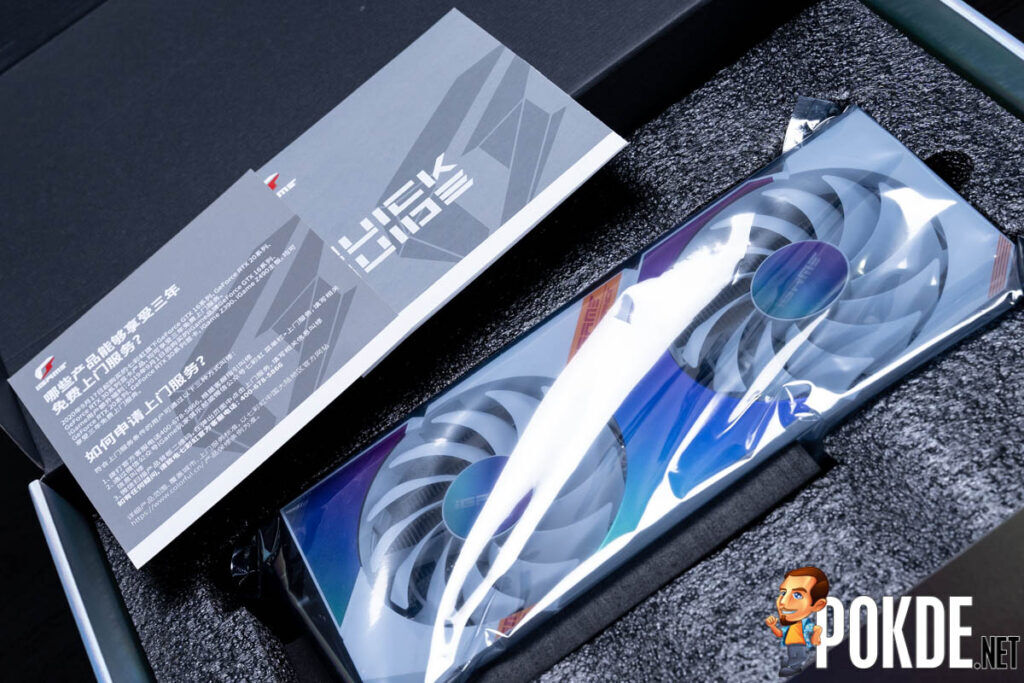 In the box, you have the COLORFUL iGame GeForce RTX 3050 Ultra Duo W OC itself and two simple pieces of documentation. The card is held in place by thick blocks of foam, so there’s really no fear of the card getting damaged even if it was tossed around by rugby players part-timing in a courier company.

One thing that I found absolutely impressive about the COLORFUL iGame GeForce RTX 3050 Ultra Duo W OC is the rubberized covers that COLORFUL has slapped onto the PCIe connector and the ports on the rear. They are quite unlike many other cards I have seen, with COLORFUL seemingly having paid some attention to making them look better than what you get with most graphics cards out there. 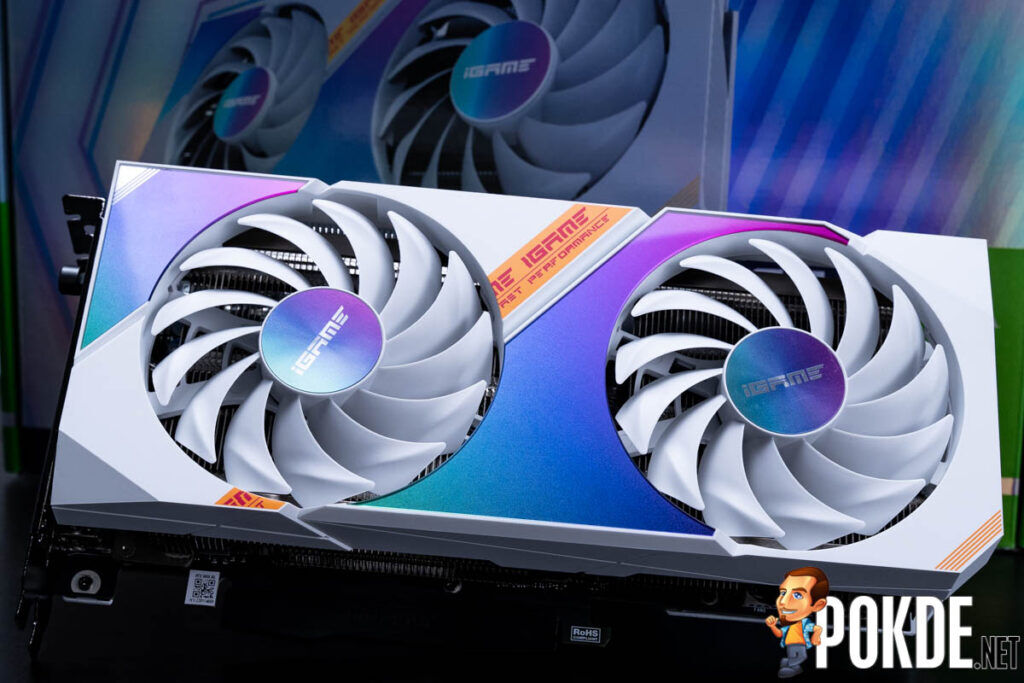 COLORFUL went with a rather interesting design, with glossy panels featuring a shimmery finish that transitions from teal to purple. I do find that the strip of yellow and red breaks the overall sleekness of the card, which is a slight bummer. I guess COLORFUL wanted to give the COLORFUL iGame GeForce RTX 3050 Ultra Duo W OC a more gamer-ish look, but I think it just messes up the overall aesthetic a bit. 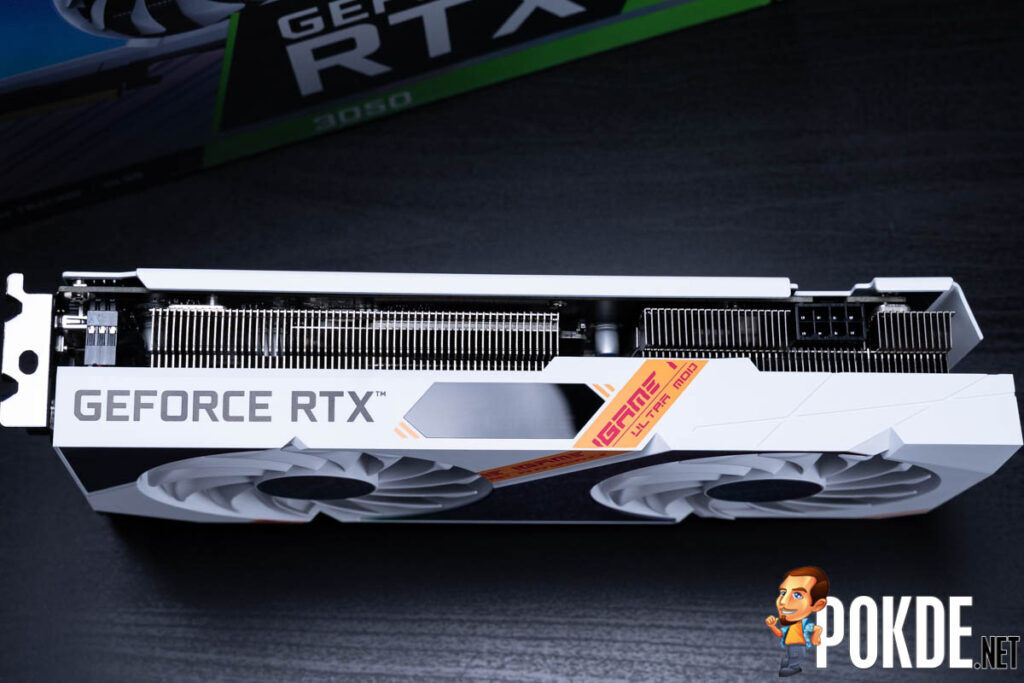 On the side we see that the COLORFUL iGame GeForce RTX 3050 Ultra Duo W OC is slightly thicker than a standard two-slot design, with side-venting fins. This essentially means that most of the heat will be dumped into the case, for better or worse, although with the amount of heat that the GeForce RTX 3050 puts out, this is pretty much a non-issue. There’s a small window here cut into the fan shroud for a little “iGame” logo with RGB lighting. 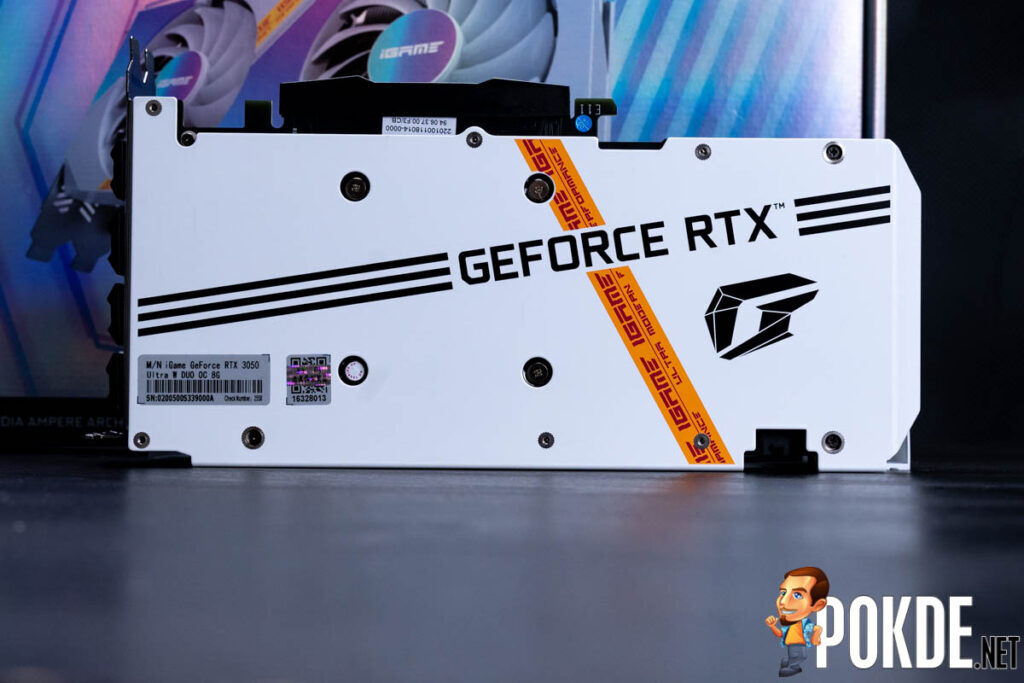 The backplate is made of metal, and here we see that the yellow-red iGame strip cross with the Adidas-looking triple-line accent. It seems that this backplate is mainly for aesthetics and overall rigidity, as there are no thermal interface material between the PCB and the backplate. We also don’t get the pass-through window that is featured on many GeForce RTX 30 series cards, but then again, it’s really quite unnecessary with a GPU like the GeForce RTX 3050. 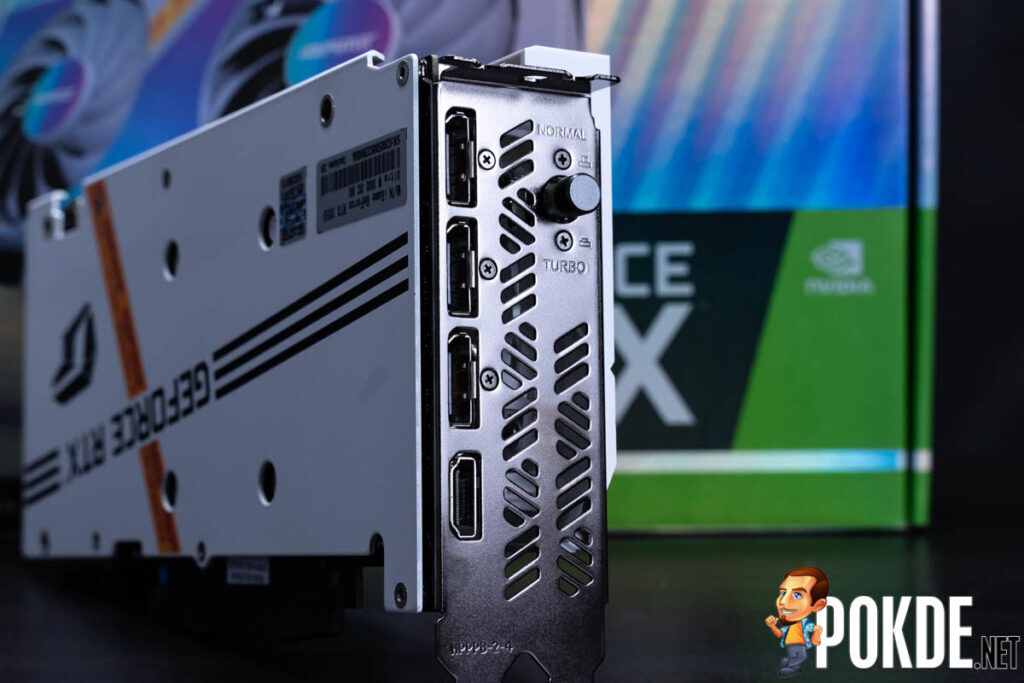 The rear I/O bracket features the three DisplayPort 1.4a and single HDMI 2.1 outputs as per NVIDIA’s reference design, along with the One-Key Overclock button, that essentially gives you a physical toggle between the reference clocks or the factory overclock settings. Quite a nifty feature, although I am not exactly sure why would you run the card at lower clocks, unless you have a really thermally-constrained build. 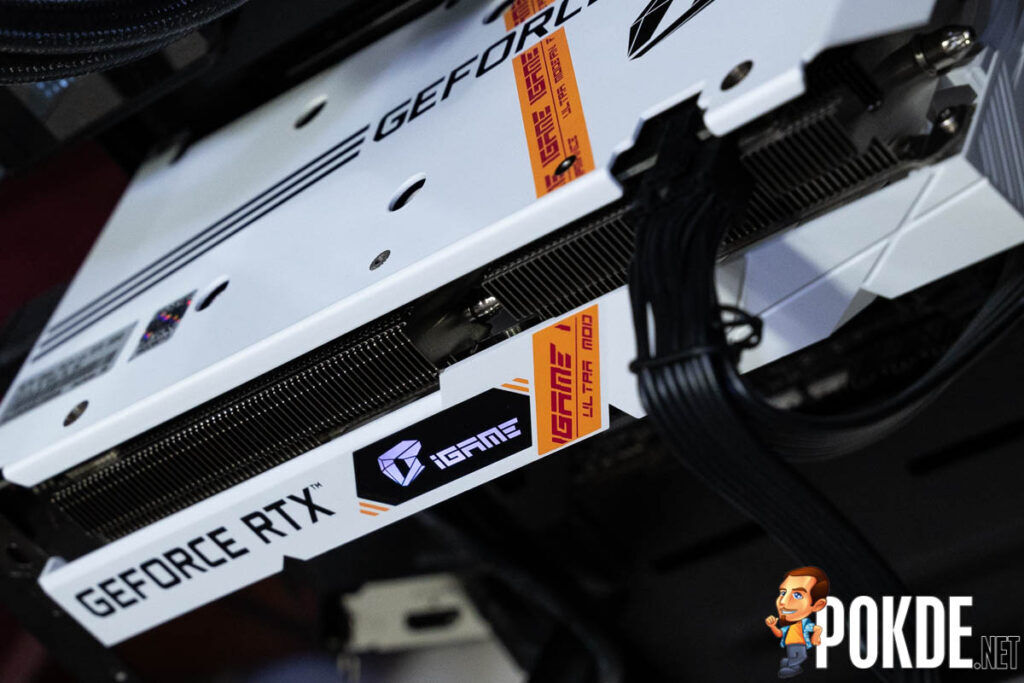 The only bit of RGB is this little window on the side. It works with the iGame Center software to allow for customizability and also lighting synchronization with the rest of COLORFUL’s components. It’s a single-zone RGB panel though, so no fancy transitions aside from the regular Color Cycle modes. 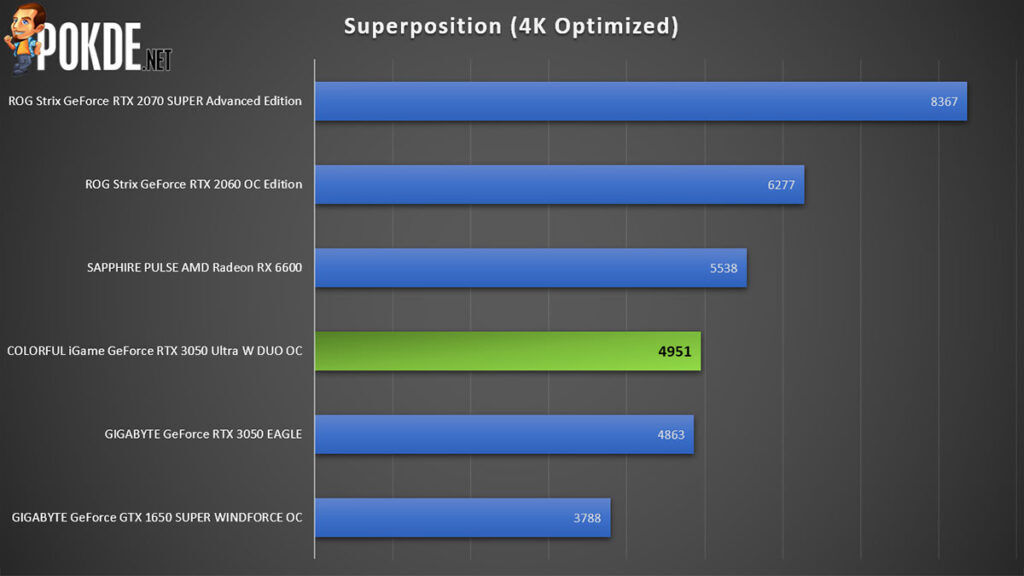 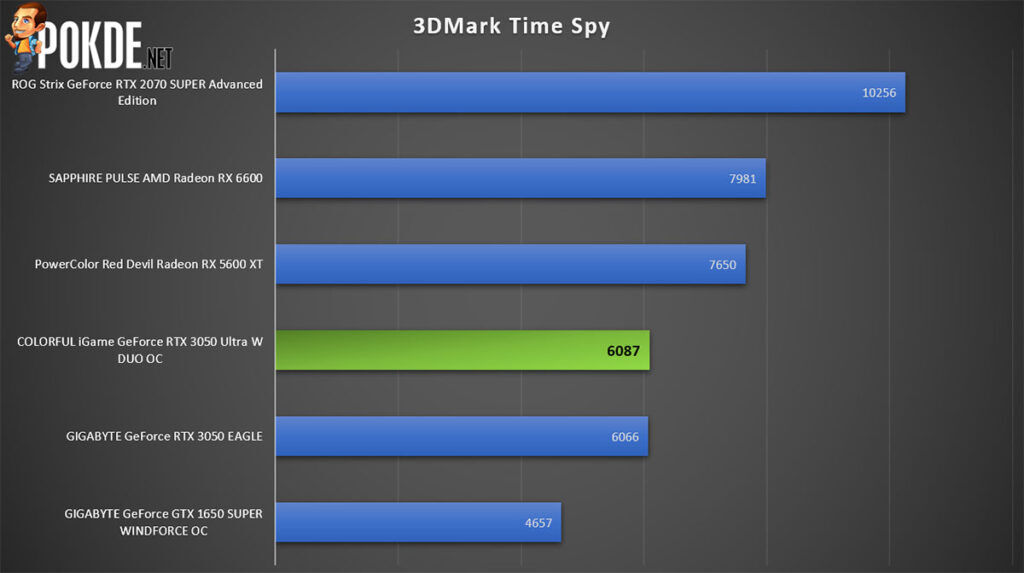 3DMark Time Spy sees a much smaller gap with and without the overclock, to the tune of just 0.3%. Once again, it’s still quite a bit slower than many last-gen offerings from NVIDIA and AMD, but it is much, much faster than the GeForce GTX 1650 SUPER. 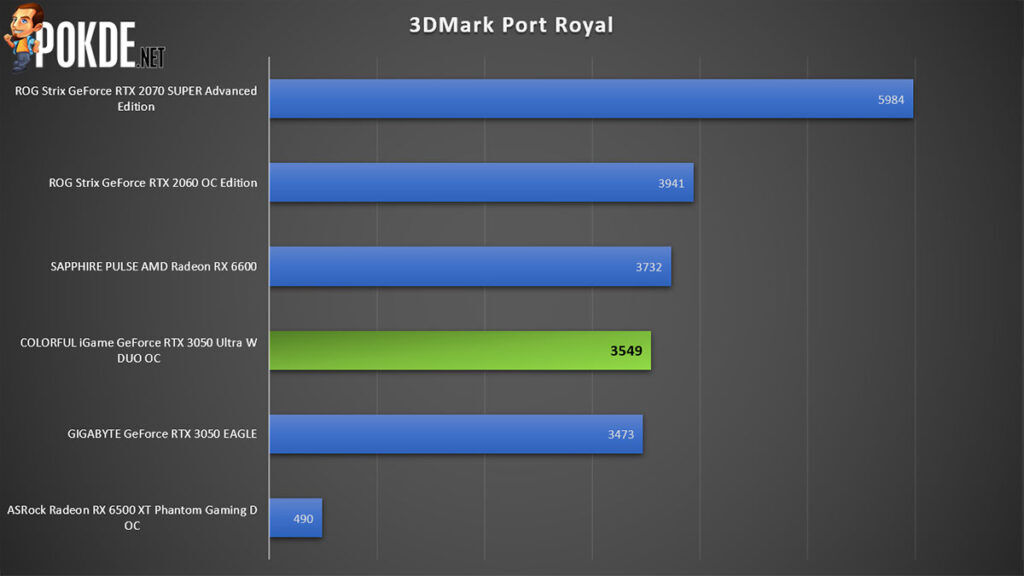 Thanks to the 2nd Gen RT cores, the COLORFUL iGame GeForce RTX 3050 Ultra Duo W OC is great at raytracing. It comes quite close to the much more expensive Radeon RX 6600, and literally blows the Radeon RX 6500 XT out of the water. Versus the non-overclocked sample of the GeForce RTX 3050, we only see a 2% difference. 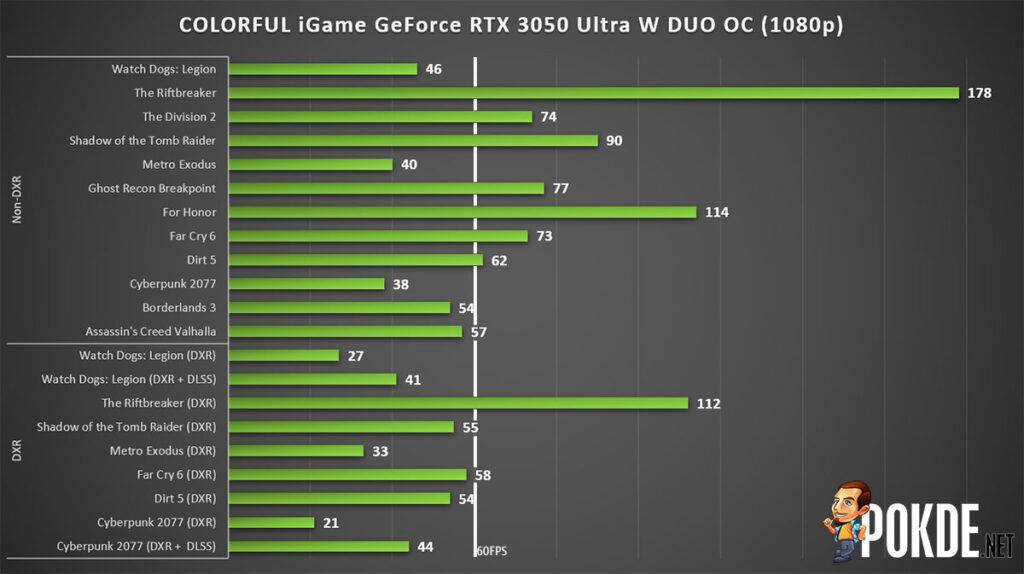 Similar to the GIGABYTE GeForce RTX 3050 EAGLE, we don’t exactly get 60FPS in a lot of titles, but you do get around 1~4FPS higher in some titles, which is barely anything. That’s probably to be expected though, given that the 45MHz overclock is actually a pretty minute one. 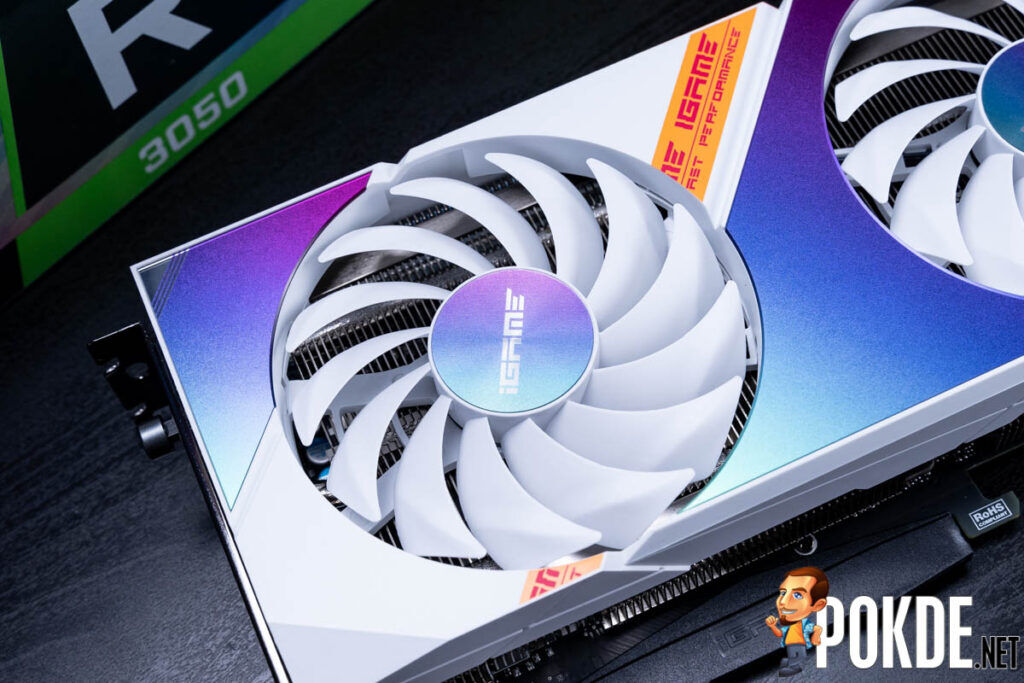 With a mild-ish overclock, the COLORFUL iGame GeForce RTX 3050 Ultra Duo W OC pulls just 122W. The cooler, despite featuring just two heatpipes and two fans, keeps the GPU temps at 62°C on average, with peak hotspot temps of just 78.8°C, all while running almost silently. The fans are spinning at a mere 1750RPM, which means that there’s still plenty of headroom when it comes to cooling here. Thanks to this impressive cooling, we see clocks of up to 1957MHz, with the average being 1920MHz, or about 44MHz higher on average than reference clocks.

Speaking of which, if you decide to not use the One-Key OC mode for whatever reason, average GPU clocks are maintained at around 1876MHz, while the power draw drops to 120W. Temperatures are just 1°C lower, while the fans are spinning about 30MHz slower. Since the Turbo Mode didn’t result in audible fan noise, I would just recommend running the COLORFUL iGame GeForce RTX 3050 Ultra Duo W OC in that mode all the time. 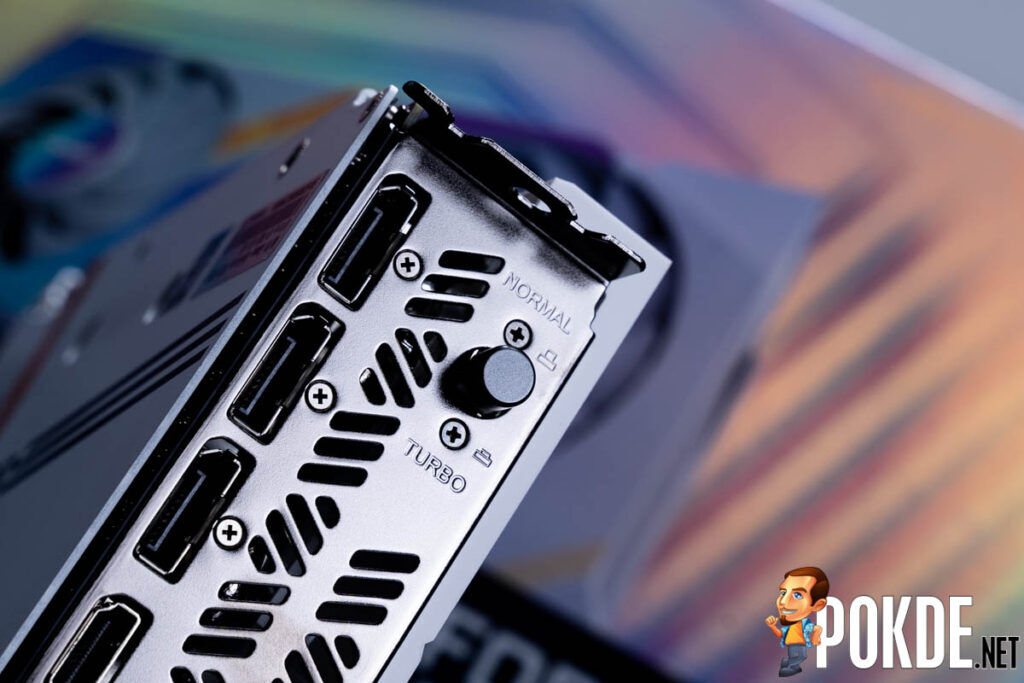 As we have established that you should run the COLORFUL iGame GeForce RTX 3050 Ultra Duo W OC in its Turbo mode all the time, it makes this button kinda moot. But in any case, it’s quite nice to see that you have the option to toggle an overclock as and when you want. It does seem like it needs a restart to switch clock profiles though, so it’s not exactly all that useful…

The iGame Center software is pretty complete, with all the necessary options for overclocking, system monitoring and also a pretty detailed GPU monitoring tab. I guess it would be more useful if paired with a full COLORFUL system, as it will enable more in depth RGB syncing.

Our thanks to COLORFUL for sending us the COLORFUL iGame GeForce RTX 3050 Ultra Duo W OC for review.