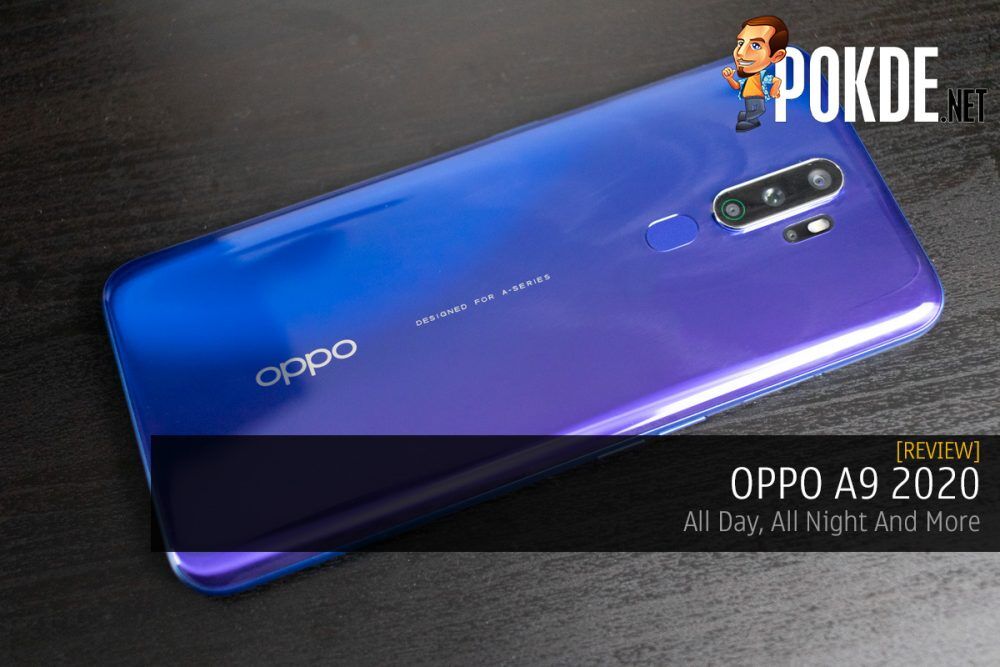 Equipped with an efficient Snapdragon 665 chipset, the OPPO A9 2020 comes with a 48MP quad camera setup and comes with 8GB RAM that's paired with 128GB of storage.

+ Lasting battery? You've got it
+ Can act as a backup powerbank
+ Super Night mode shots is impressive

Astonishing battery life but that's about it.

The OPPO A-series has been known to be more of an entry-level lineup. With the OPPO A9 2020 however, they’ve added several upgrades that makes it seem more than just another entry-level smartphone. Will it impress? Let’s find out.

From the box, you’ll get the phone itself, documents of the device, a SIM ejector, charging brick, a USB Type-C cable and a clear protective case for it. It’s nice to see that they’ve also included earphones / handsfree in the package.

On the front the OPPO A9 2020, you have a waterdrop notch at the top, which fits in the front camera. There a little bit of a chin going on down below.

Interestingly, only the power button is present on the right side. The volume rockers have been pushed to the left side of the smartphone, accompanied by the SIM / microSD tray.

Here at the bottom, we have the 3.5mm jack, the microphone, the phone’s USB Type-C port, as well as the speaker. As for the top side of the A9 2020, it’s completely empty.

Over at the back, we have the quad camera setup with an LED flash that sits right beside it. There’s also a fingerprint scanner found just below the cameras. Of course, you’ve got the OPPO branding at the lower part of the smartphone.

This is the second device that we’ve tested that uses a Snapdragon 665 under the hood and it seems that it scored lower than the other smartphone.

Despite that, it comes out stronger over here in the 3DMark test with an admirable score.

Compared to devices that’s around or lower than the OPPO A9 2020’s price point, you can see that it does fall a bit short in terms of CPU performance.

On PCMark’s Work 2.0 benchmark, we see that the scores are actually not bad for productivity, with it edging out the Mi A3 by a slight margin.

Finally, we get down to the battery scores, where it managed to last for 14 hours and 49 minutes in PCMark’s battery test. This is likely thanks to the efficiency of the Snapdragon 665 and the lower screen resolution. Moreover, it does have a sizable 5,000 mAh battery capacity.

Unfortunately, OPPO smartphones doesn’t come with the battery usage chart at the settings, which we normally show to showcase our real life usage. Despite that, I can say that after 24 hours of usage (from 100% battery), I still have 54% left on the device. It’s quite impressive since I’ve gamed for quite some time on it, aside from the usual social media browsing and what not.

Sadly, the OPPO A9 2020 doesn’t come with the brand’s proprietary VOOC fast charge. While the battery life is pretty lengthy, it would’ve been nice if they had offer that. This is especially since I was able to get only 14% of charge after a 30 minute charging period.

Although the OPPO A9 2020 comes with thin side bezels, it is actually thicker at the bottom part. At first I thought that it might bother me but actually it feels comfortable to hold. As for the display, well let’s just say that it wasn’t the best experience that I’ve had. You can clearly see the pixels on the display.

For gaming, I tested the device by playing Call of Duty Mobile. It does get warm after an hour or two of gaming but there’s nothing to be concerned about. Although the device allows the game to be played in max settings, I find that lowering the graphics is a lot more acceptable to the eyes. Putting the game on max settings won’t let you enjoy higher refresh rates.

The OPPO A9 2020 runs on ColorOS 6.1, and there’s actually a lot that you can customize here. Despite that, I feel that the user experience was kind of sluggish as you can certainly feel the delay when you’re trying to move around.

Moving on to the camera UI, it’s pretty much straightforward with everything visible. I like how OPPO put the mode conveniently on the left side. It makes it easier to switch between shooting modes.

As far as picture quality is concerned, it was a hit or miss situation. You’ll probably like the OPPO A9 2020 if you enjoy the beauty features for selfies. The Super Night mode is one feature that I think did a good job in low-light conditions.

The Dazzle Color mode didn’t really help in photos as shots taken with it make them look rather unnatural. I think the standard camera does a decent job and still viable enough for your social media posts.

You can check out the link here to see the full resolution gallery of the pictures.

Based on the specifications, the OPPO A9 2020 would be considered as a mid-range smartphone. Despite that, I don’t think its asking price of RM1,199 justifies its offerings. Furthermore, I feel that they could’ve fitted in with a smaller RAM configuration and make it more affordable.

Don’t get me wrong, the battery life is an absolute beast but that’s the thing, it’s probably the only reason I can see people being interested in this. It’s also worth noting that the 720p resolution ruined the experience for me. With that being said, we will not be giving an award to the OPPO A9 2020 smartphone.

We would like to thank OPPO Malaysia for providing the OPPO A9 2020 used in this review.

realme isn’t planning on a gaming phone anytime soon
Next