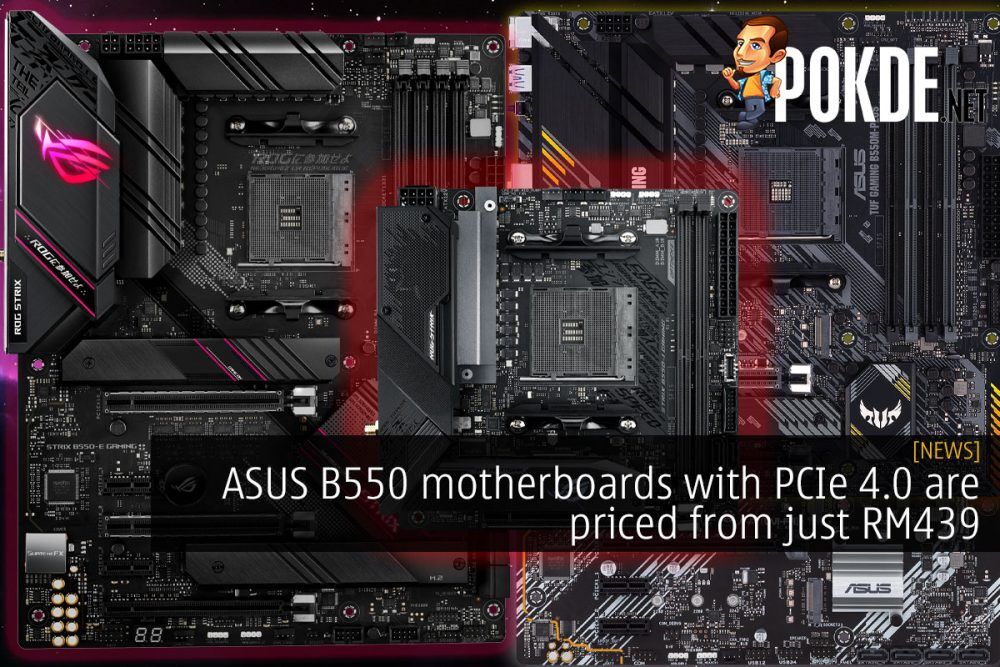 ASUS has just announced the AMD B550 motherboards that will be brought into Malaysia, and they offer quite an upgrade over the previous AMD B450 motherboards that are currently available. New features include what the AMD B550 platform brings to table, such as USB 3.2 Gen2 and PCIe 4.0 support from the CPU, as well as add-ons like WiFi 6, 2.5G Ethernet and also support for faster memory clocks.

ASUS built the ROG Strix B550-E Gaming for premium performance, with a beefy 14+2 power stage VRM design and reinforced Safe Slots to support heavier GPUs. Speaking of which, this board supports both SLI and CrossfireX GPU configurations, to allow for more GPU horsepower than a single GPU can offer. It will also support two M.2 SSDs, which sport individual heatsinks to cool them better. 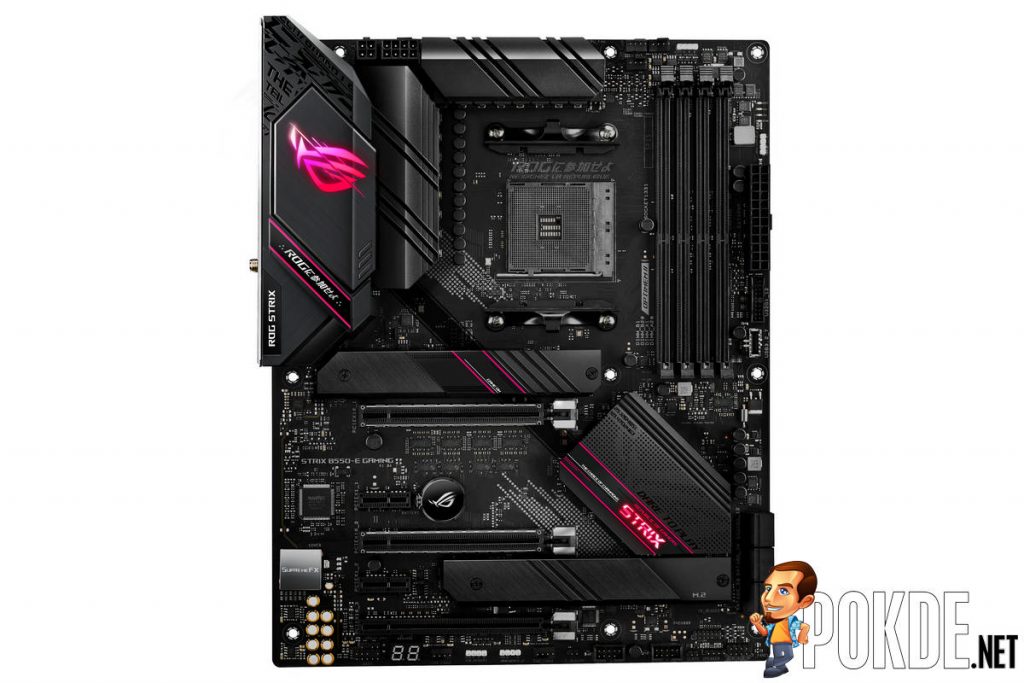 On top of that, ASUS baked in Intel’s I225-V 2.5 GbE and WiFi 6 onto the board for high-speed Internet, as well as Bluetooth 5.1 for a solid connection to other devices. Speaking of connections, the ROG Strix B550-E Gaming offers three USB 3.2 Gen2 connectors along with a mix of USB 3.0 and USB 2.0 ports. Last but not least, the board sports premium SupremeFX S1220A audio, with a USB-C Audio port that can be used for Type-C audio devices or standard USB connectivity, with automatic detection of the device connected.

The ROG Strix B550-F Gaming (WiFi) drops some features from the ROG Strix B550-E Gaming, in pursuit of a more affordable price tag. Niceties like the Q-CODE readout, SLI support and front USB 3.2 Gen2 header are removed. The power delivery system is also reduced to a 12+2 configuration, but it should still be plenty to power any AM4 processor. 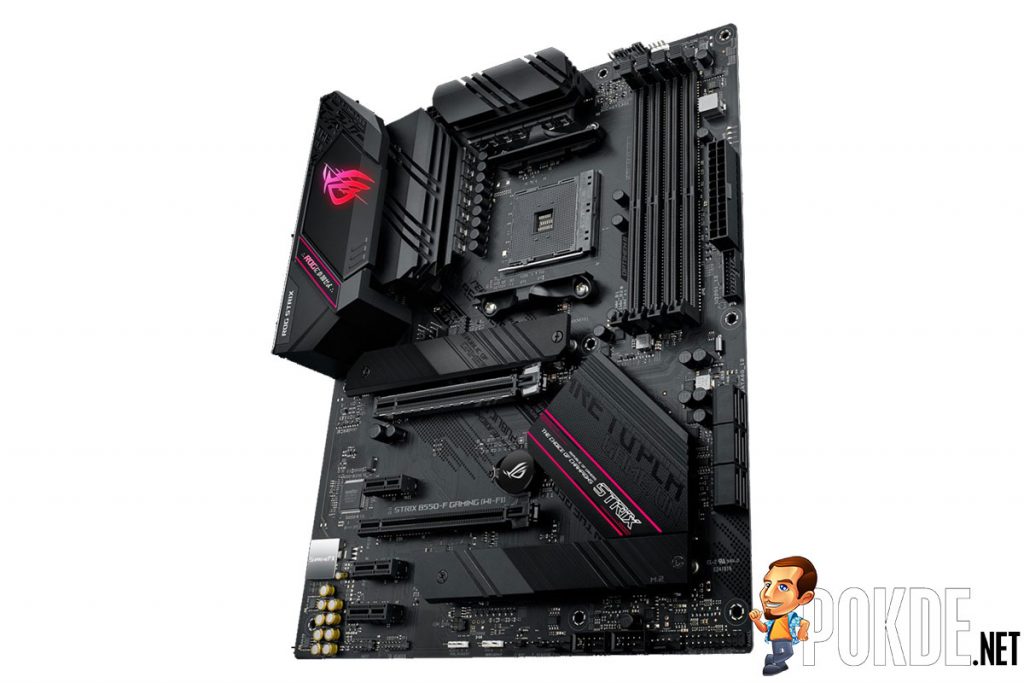 While there are some compromises, the 2.5GbE LAN by Intel and WiFi 6 connectivity is also available on the ROG Strix B550-F Gaming (WiFi). The audio codec used is also the same ROG SupremeFX S1220A, which supports up to 32-bit audio playback. Each of the SSDs also sport their own heatsink, similar to what the ROG Strix B550-E Gaming offers. 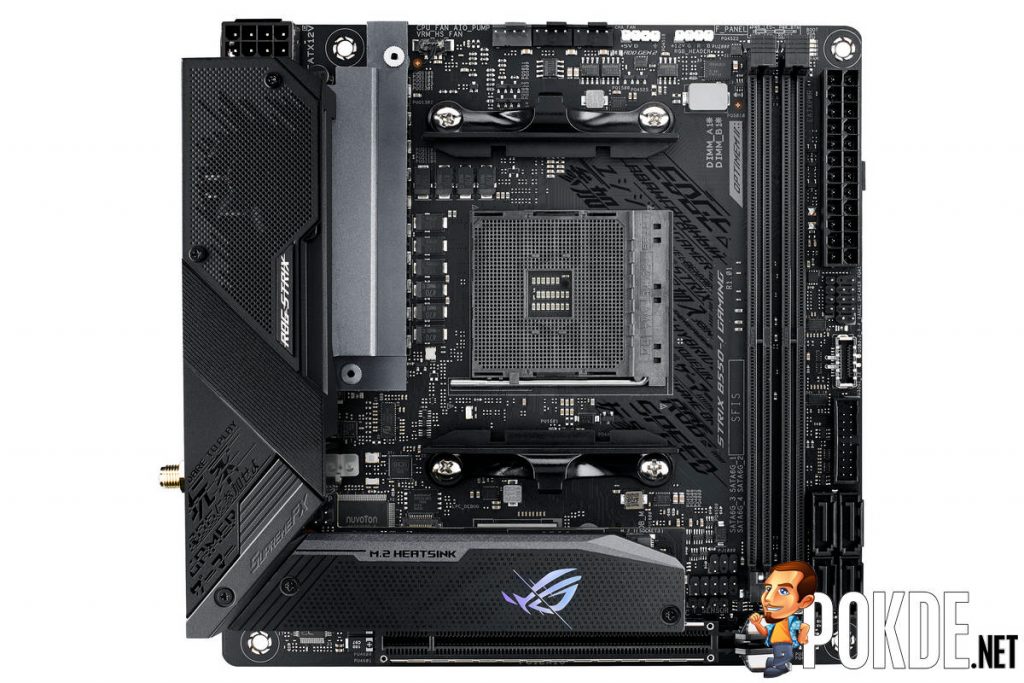 The only AMD B550 motherboard from ASUS, the ROG Strix B550-I Gaming uses a smaller 8+2 power delivery system. To ensure that the performance of the 3rd Gen Ryzen processors won’t be held back by the VRM, ASUS implemented active cooling for the VRM. In the compact dimensions of the ROG Strix B550-I Gaming, ASUS still managed to cram in two M.2 SSD slots. For connectivity, ASUS also managed to cram in 2.5 GbE Intel LAN and WiFi 6 connectivity, as well as a good selection of USB ports on the rear.

Pricing and availability for the ROG Strix B550-I Gaming will come later. 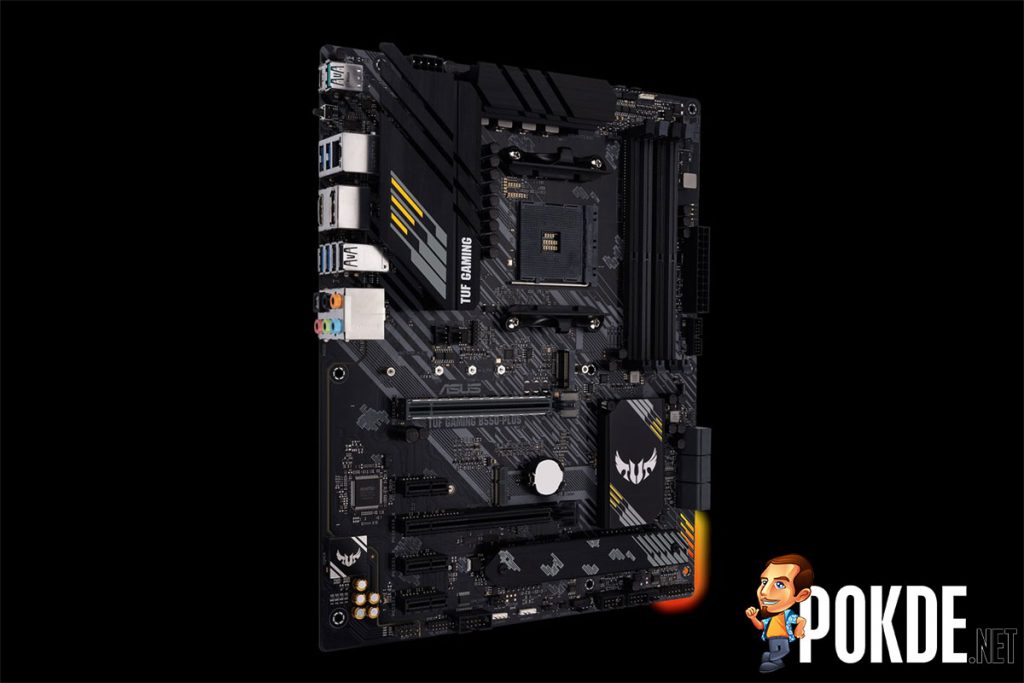 For those looking for a more military-inspired aesthetic, the TUF Gaming B550-Plus might be right up your alley. It offers the same support for PCIe 4.0, although curiously enough they decided the warmer PCIe 4.0-enabled M.2 slot doesn’t need a heatsink, but the one below the PCH which only supports PCIe 3.0 SSDs needs on. The VRM power delivery system sports a 8+2 DrMOS arrangement under large heatsinks. ASUS also used military-grade TUF components for longevity. There’s no WiFi on this board, but there’s 2.5 GbE LAN, with an empty M.2 slot (Key E) for a WiFi module if you decide that you need WiFi down the road.

For a breakdown of the specifications of ASUS’ B550 boards, check out the table below:

All of these boards are available now, with 3+1 year warranties.

Pokdepinion: I am looking forward to the ASUS ROG Strix B550-I Gaming…

AMD Ryzen 5000 CPUs can run on ASRock X370 motherboards, but AMD really doesn’t want you to do that
Read More
4584