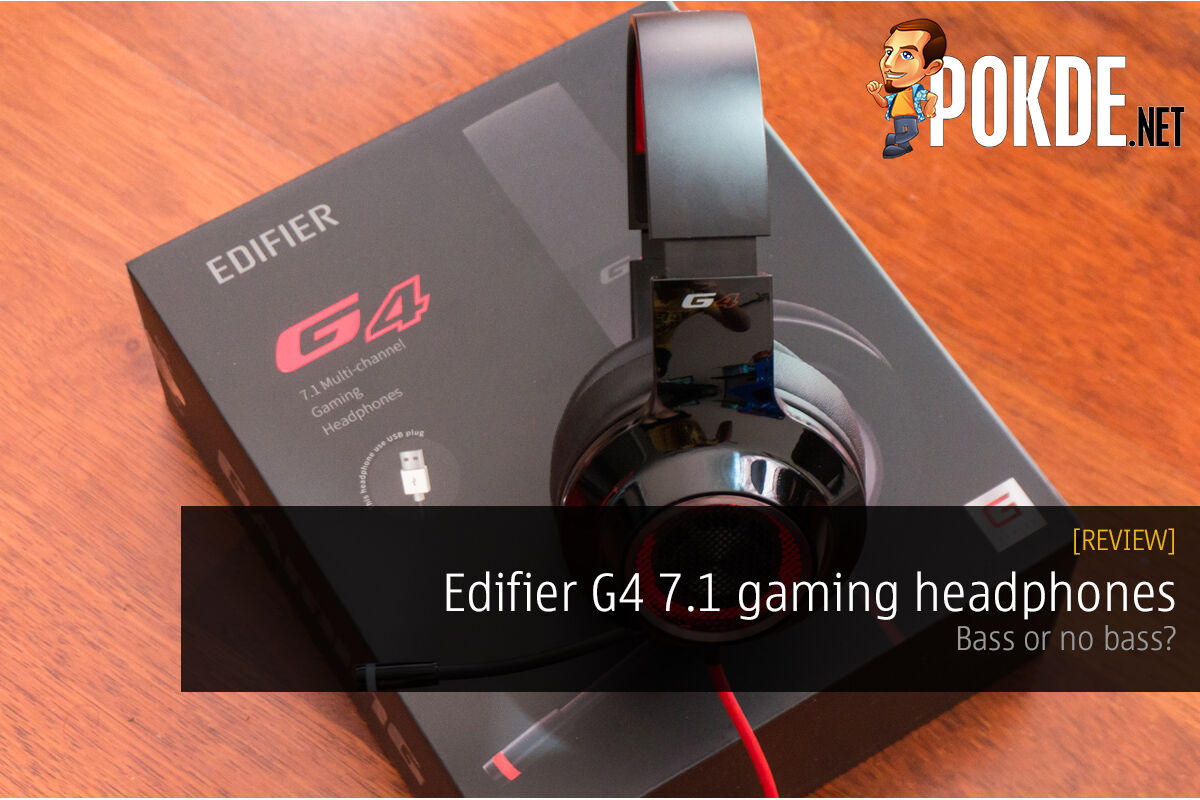 - Non-detachable cables, no love for audio over 3.5mm
- No folding mechanism for improved portability
- Premature drivers are a pain to install
- No option to enjoy bass without vibration
- Mid-bass bloat is obnoxious without playing around with the EQ

The Edifier G4 is a good gaming headset, but could definitely use some polishing to make it a great one.

Edifier is a brand better known for their audiophile-class offerings with great value for money, but they make some good gaming headphones too. Their latest range of headphones consists of the Edifier G4, Edifier G10 and Edifier G20. We have here their top of the line Edifier G4 with virtual 7.1 surround audio, so let’s take a look at it. 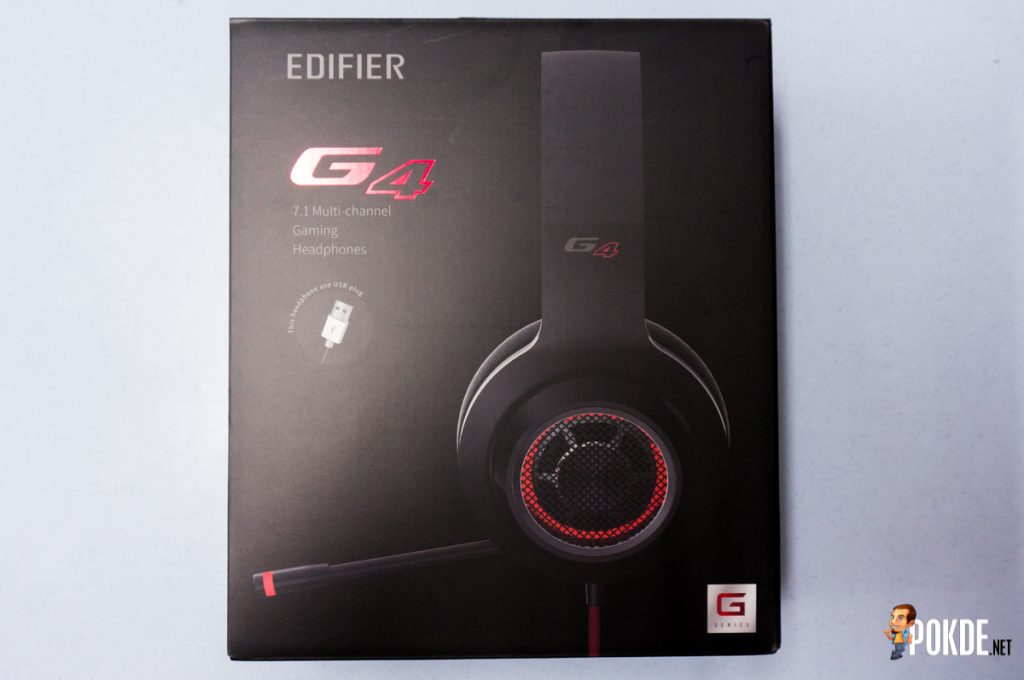 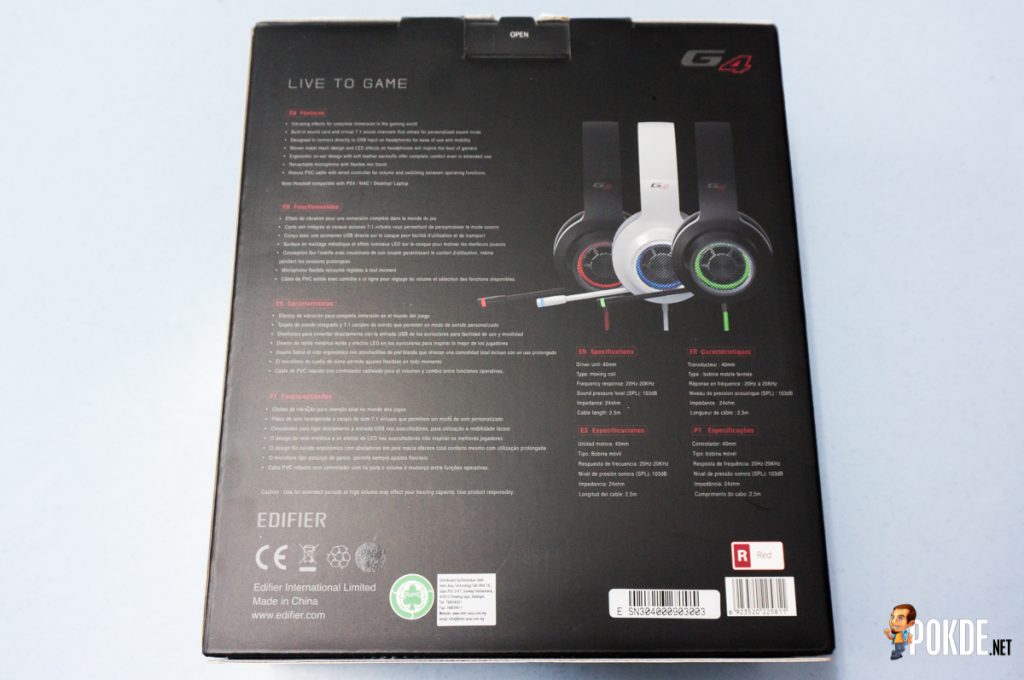 The back of the packaging lists some features and the specifications of the Edifier G4. The Edifier G4 comes in three colors, with a little label telling you what color you are getting in the box. We have here a saucy red and black one, which is my favorite color combination. You can go for the black-green or white-blue options too if red is just not your cup of tea. Oh and apparently “Live to Game” is the motto of this product. 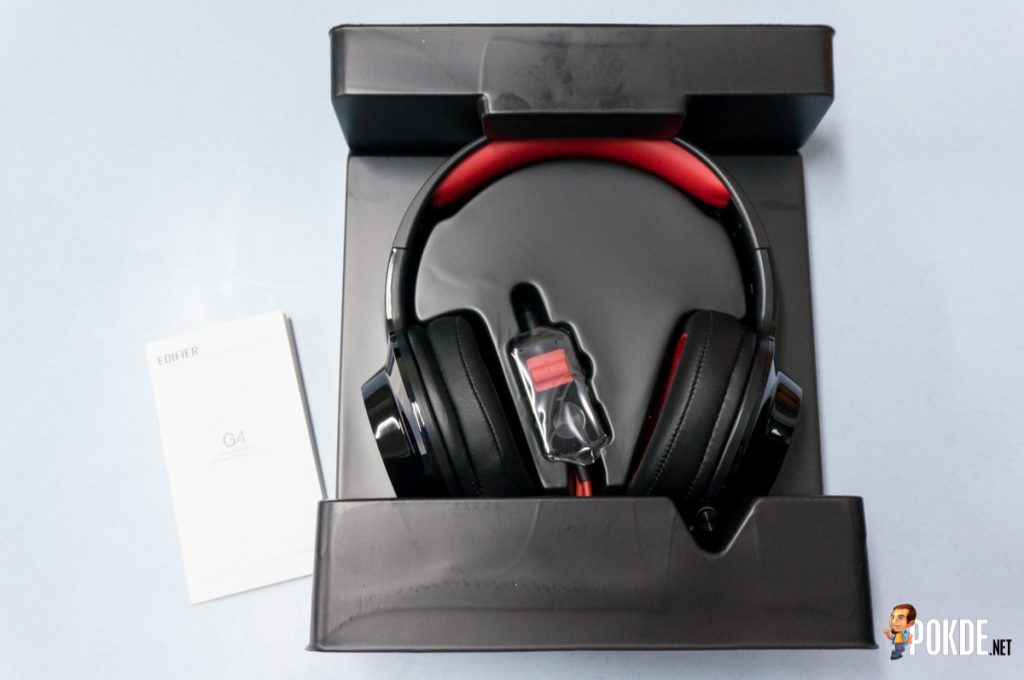 An injection molded plastic tray holds the headphone steady in the packaging, with sufficient space away from the sides, so damage to the outer packaging will not harm the headphones itself. 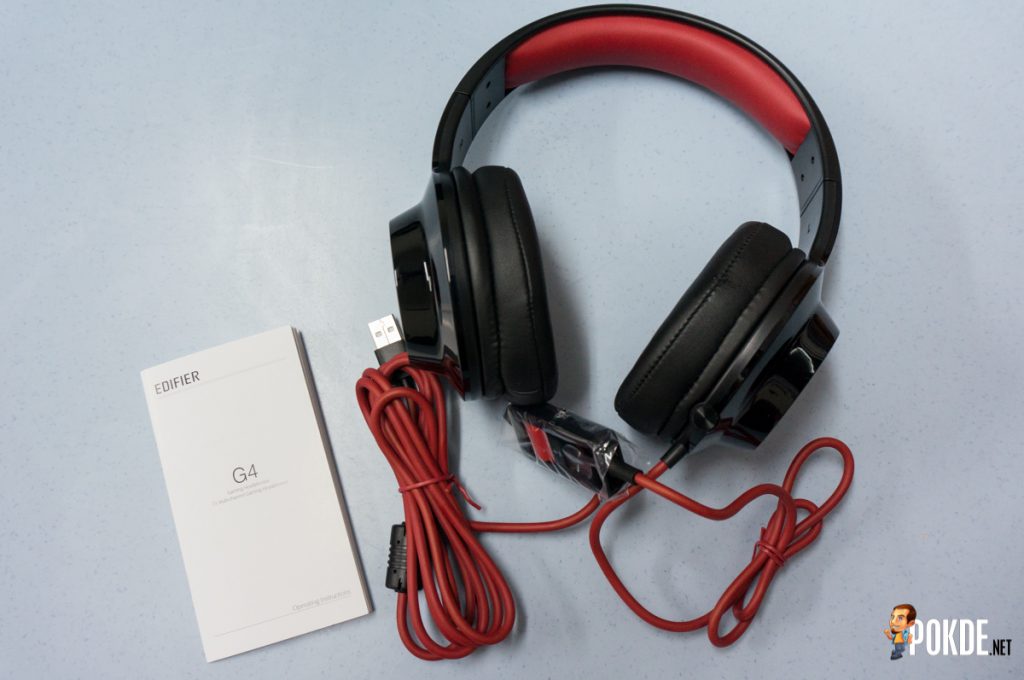 The Edifier G4 does not come with much, just the headphones and a user manual. Perhaps with so much space in the box, perhaps a small headphone stand would have been a nice inclusion? 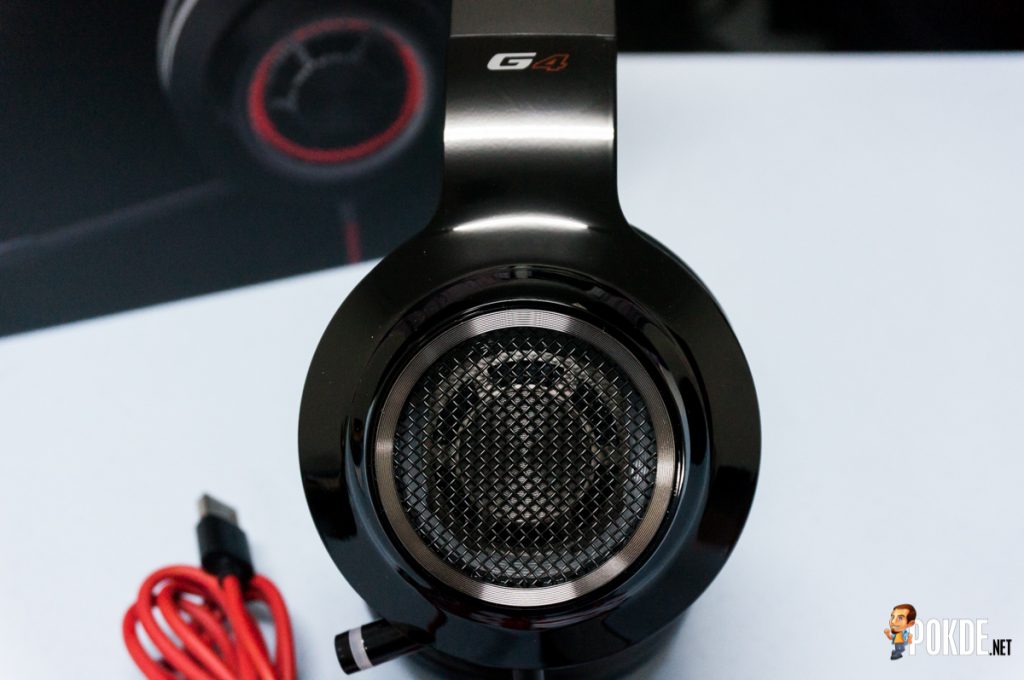 The earcups are pretty nice, with a metal mesh over what looks like a driver. They are circular with a retractable boom mic and the non-detachable cable exiting the left ear cup. The rest of the build is predominantly plastic, gamers who demand premium materials need not apply. 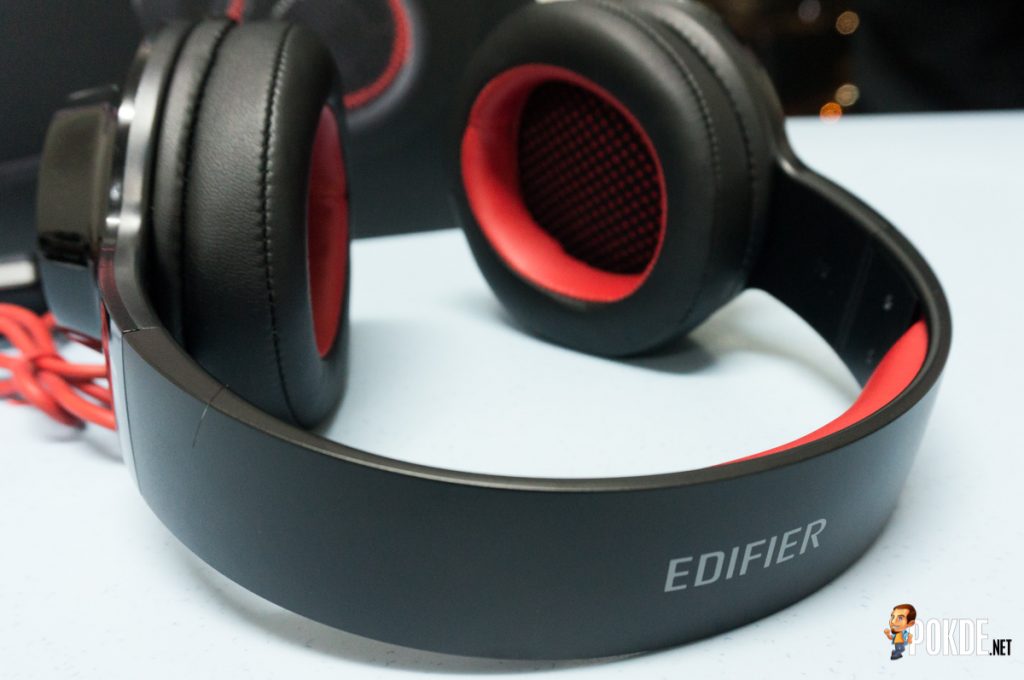 After a few comments about the Edifier headphones I have reviewed previously not having enough branding, the Edifier G4 finally has the Edifier logo emblazoned on the outer side of the headband. Nice. Also here you get to see the red highlights Edifier used in the design of this gaming headphone. 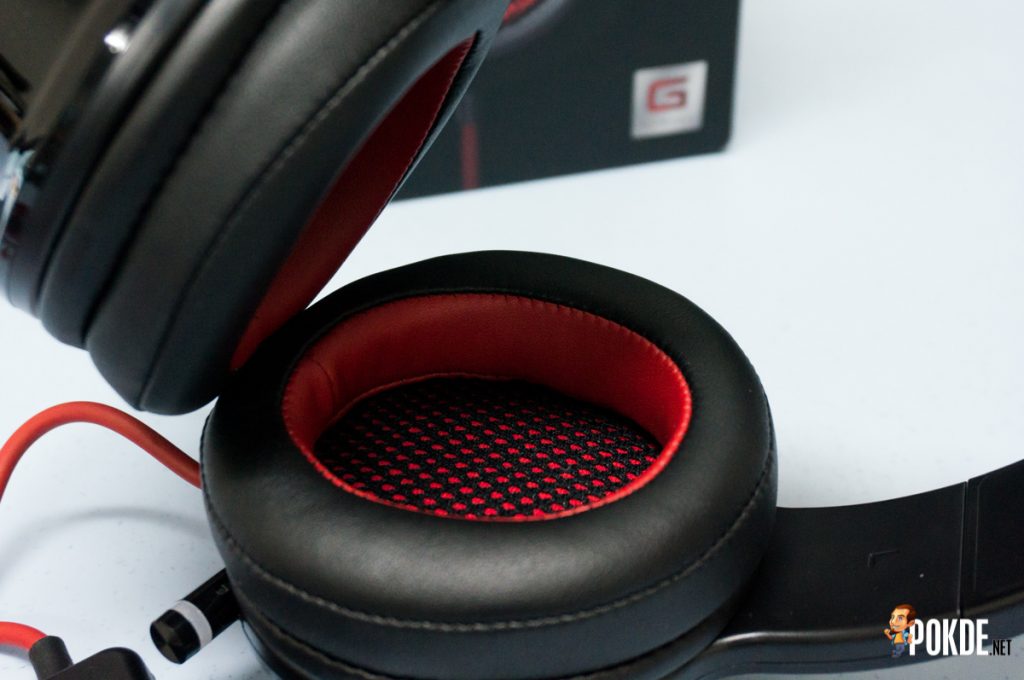 Here’s a closer look at the earpads. These are over-ear headphones, and these earpads will wrap around your ears. While the earcups are round, the actual recess in the earpads where your ears will be are actually slightly oval for a better fit. Thickness is decent so even people with bigger ears should find the Edifier G4 comfortable. They do not have any form of ventilation though, so be prepared for some sweaty ears in warmer conditions. The black stitching over the red foam looks pretty good. 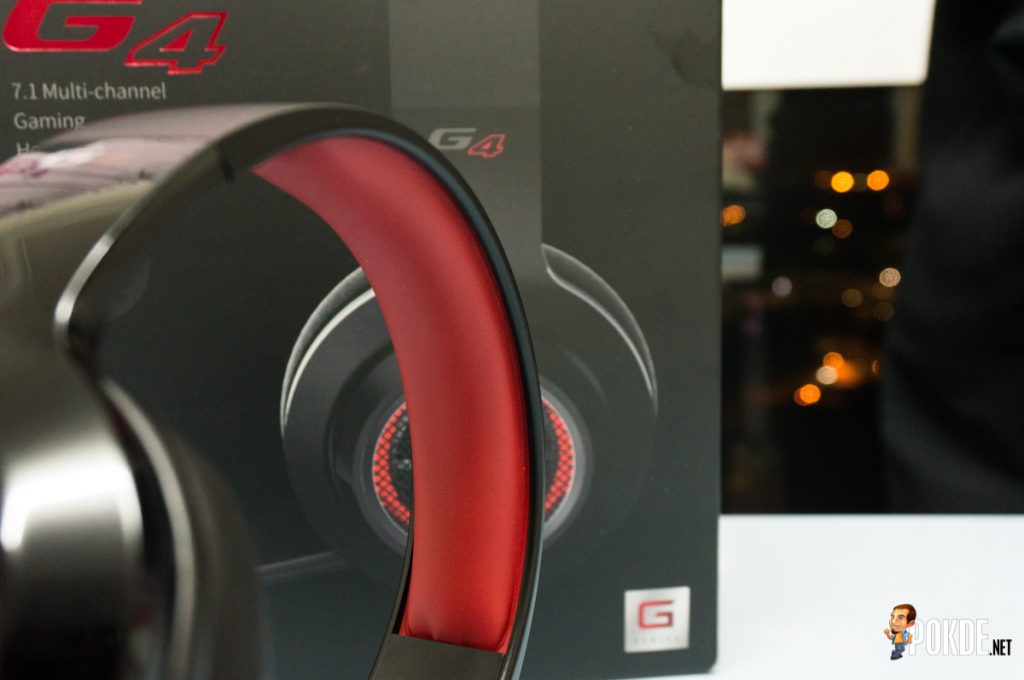 Here’s the inner side of the headband. The padding is wrapped in red pleather, giving this headphone a more “gamer-ish” vibe. The padding is plush and broad, promising comfort over long periods of gaming. 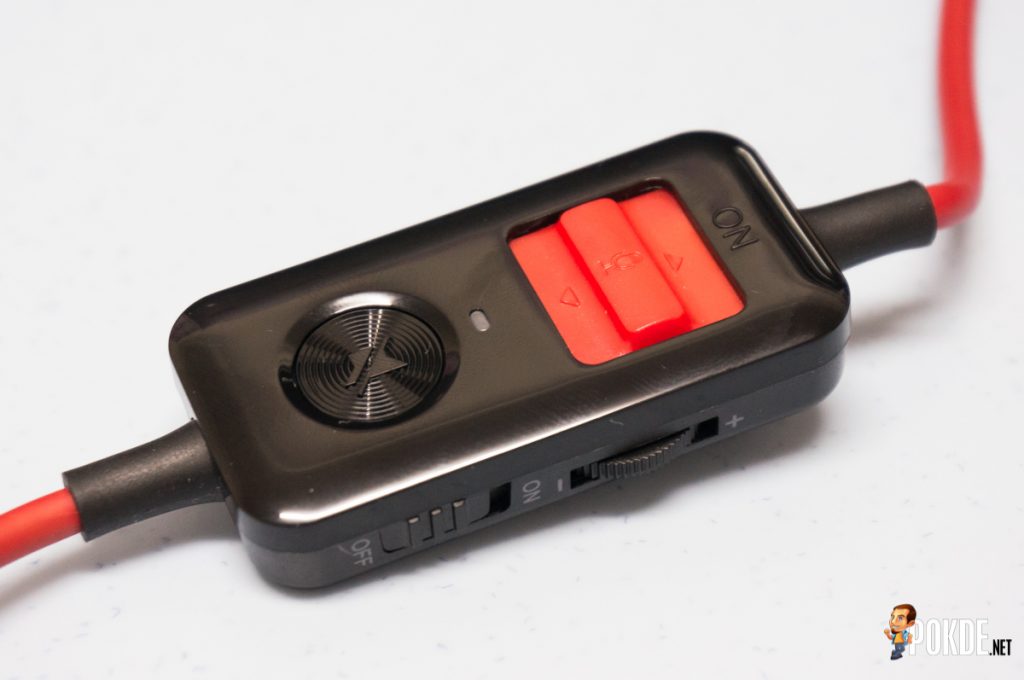 This is the controller of the headphone. The mute button actually mutes the microphone, and the toggle switch with the microphone icon toggles the vibration motor. There is a volume wheel on the side and a power switch as well. The labeling of the switches is rather confusing, and the volume wheel does come off as rather cheap too. 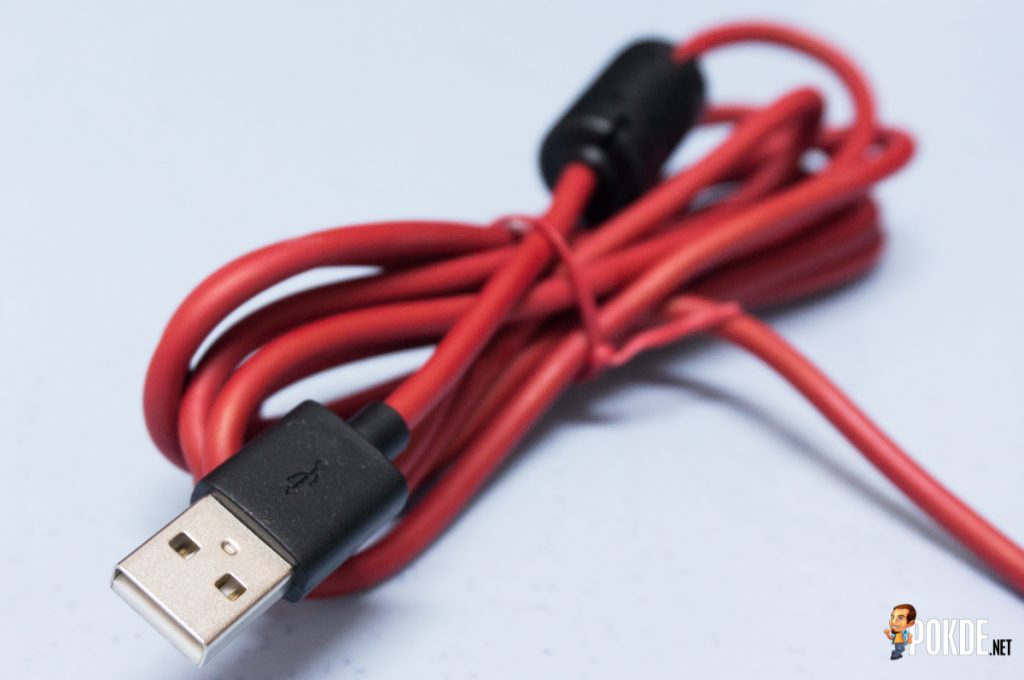 No gold plating here, but it is understandable given Edifier’s focus on spending only where it counts; audio quality. Gold plating does not do anything for performance but only to prevent the ugly oxidation you may see on older USB connectors. The cable is your standard rubber wrapped variety, which is disappointing when braided wires look better and are also more durable. You do get a ferrite core though to block unwanted noise from passing from your device to the headphone, and on to your ears.

I will start off by saying that this is an early unit, with early drivers. My experience of using this headphone was not as straightforward as simply plugging it in and heading off to play, but it actually involved a lot of troubleshooting. First issue I faced was my Lenovo Y50 running Windows 10 not recognizing the headphone when I plugged it into any of the three USB ports, regardless whether it was a USB 3.0 port or USB 2.0 port. After repeatedly connecting and disconnecting, it finally detected it. On to install the driver…which leads to a restart.

After the restart, I had to repeat the disconnecting and reconnecting process, but thanks to the power switch on the controller, saving me the effort to physically disconnect the USB connector and reconnecting it. And I found the next issue, the driver was not giving me all the features available. After communicating with a representative of Edifier Malaysia, I tried connecting it to a USB hub that is integrated into my laptop cooler, and voila, every feature was available, and I had no issues with my laptop not detecting my device. Once again, I must reiterate that this is an early sample with early drivers, so updates should be rolled out soon to solve these issues. 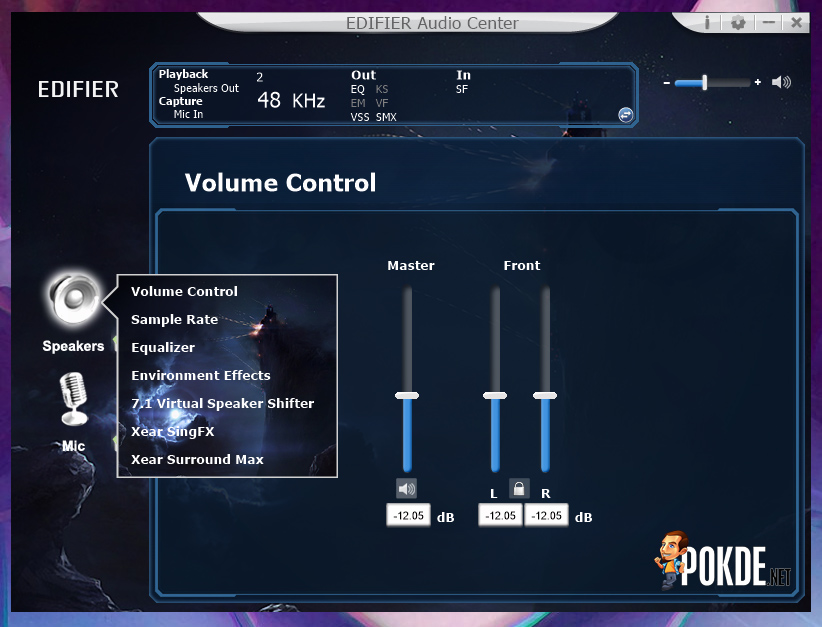 With that out of the way, let’s take a closer look at the driver software. It looks very 2000-esque, with blue lightning clouds featuring heavily in the whole software, 3D icons and 3D effect. This piece of software seems to be the work of someone at Edifier who felt like it was time to throwback to the “good old days” when designing the user interface. However, while it looks classic, the features offered are definitely on par with recent headphones. You get the much touted virtual 7.1 surround sound option, Xear Surround Max audio effect and more. 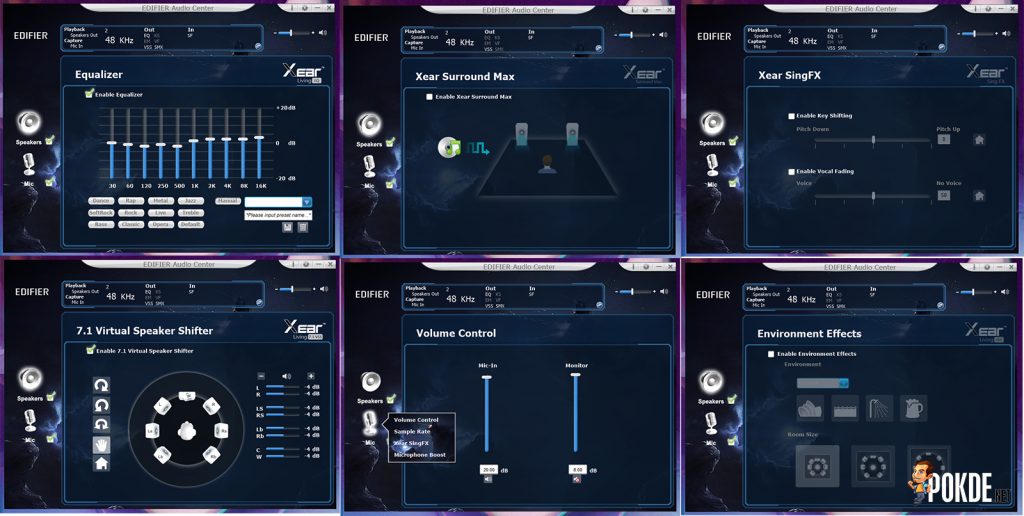 Going through the software features, right clicking on the microphone and speaker icons over on the left presents us with more stuff to play around with. We have here the usual volume control, sampling rate toggle with the option of either 44.1 kHz or 48 kHz, 10-band equalizer with a handful of presets, the virtual 7.1 surround sound settings which allow you to adjust the virtual “position” of the “speakers”, Xear SingFX for karaoke enthusiasts and Xear Surround Max which further enhances the virtual surround effect. For the microphone, you get a volume control and sampling rate toggle, microphone boost toggle and last but not least, Xear SingFX for the microphone to add echo or just alter the pitch of your voice. 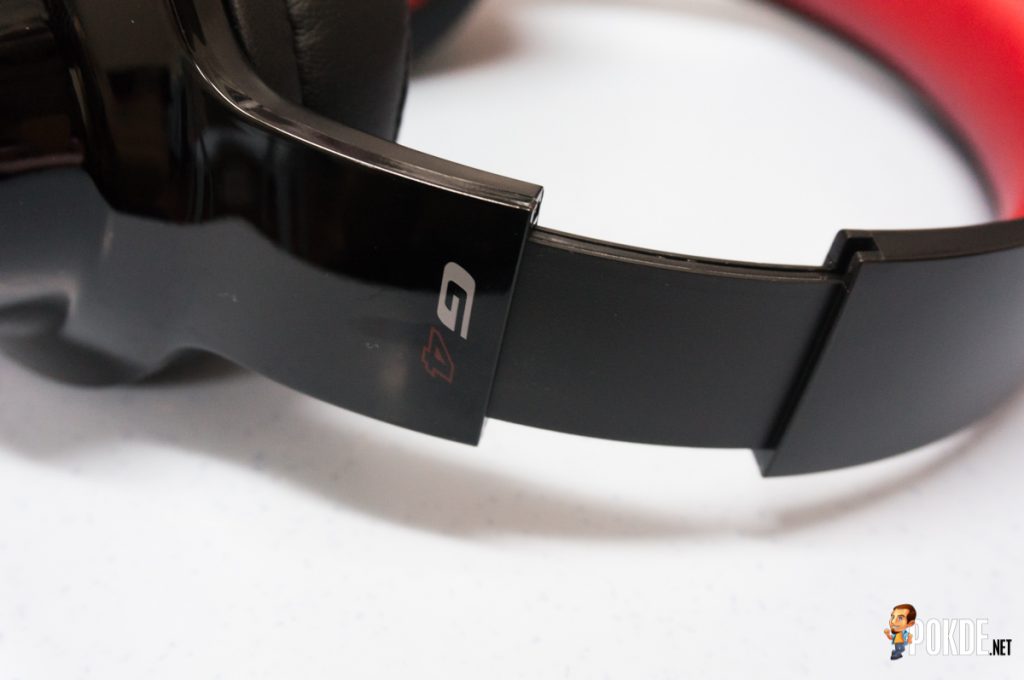 Putting these headphones onto my head, I noted that these headphones are really quite comfortable. We have a thick padding for the headband and earpads, so it was quite comfortable indeed. The adjustable headband length will also make it a great fit for people with bigger heads. As for me, I only needed to extend the headband by three notches, out of a total of 10, so there is still a lot more room for those out there with huge heads. Portability is thrown out of the window with no folding mechanism to reduce the space it takes up. These are far from the largest headphones we have seen though. 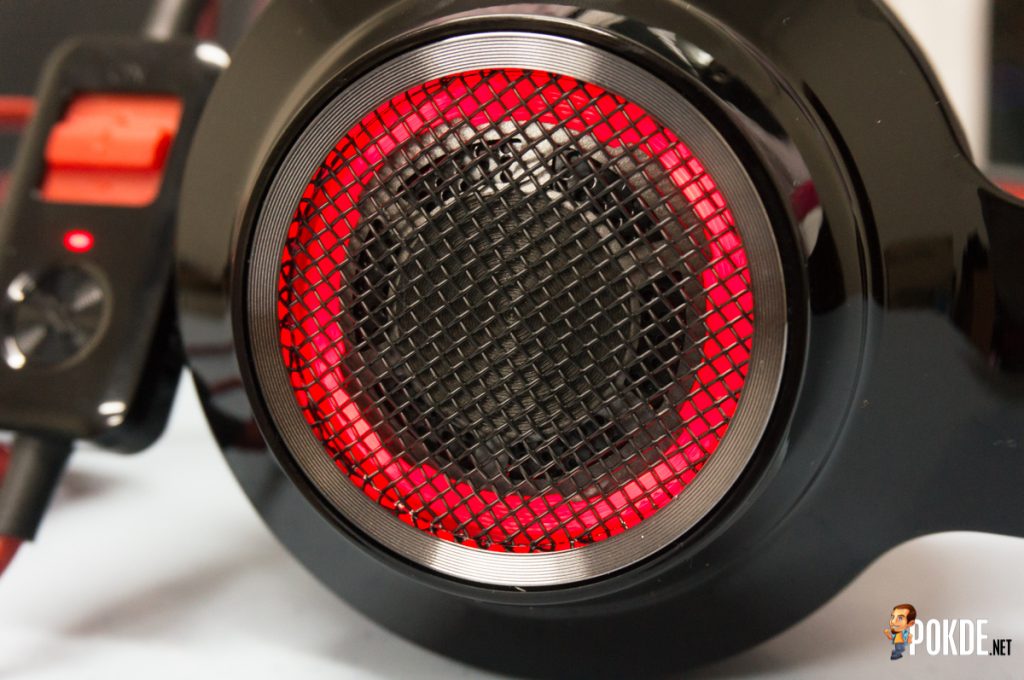 Not for the RGB enthusiasts.

Since we have so many options available in the driver settings, let’s talk about the default settings first. So at factory settings without equalization and all surround sound enhancements off, the bass was there, but it was not deep nor controlled enough, being all over the place . Turning on the “Virtual 7.1 Speaker Shifter” doesn’t do much as it was indeed quite difficult to discern any difference in soundstage with the mode toggled. The “Xear Surround Max” does the job though to improve soundstage, but then the clarity seems to take a hit. Playing around with the equalizer allows the clarity of the Edifier G4 to shine, as well as lower the mid-bass bloat to give the headphone a cleaner sound. While the 7.1 feature is designed to enhance spatial positioning in games, games with good sound design like Overwatch won’t benefit much from it, as any stereo sound system is enough for perfect audio cues. And despite all the features here, Edifier decided not to add an option to enable bass without having vibration. Volume wise, these headphones can go really loud. 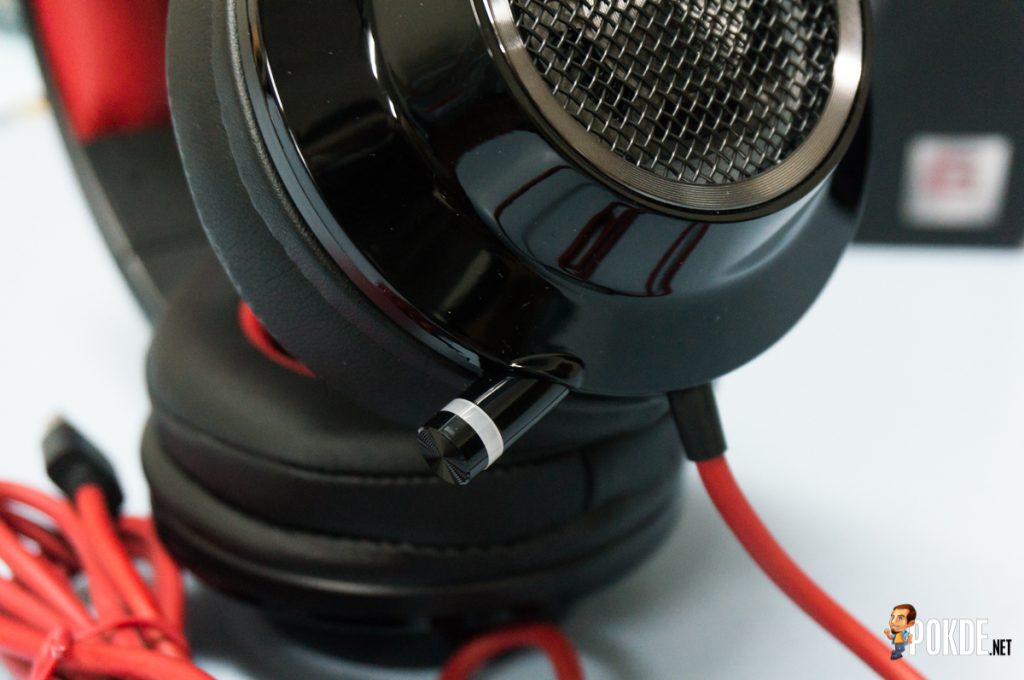 The retractable microphone features a little translucent ring to indicate its status, lit when active and not when muted via the button on the controller. There are a few gimmicky features to play around with if you want to annoy your friends, and the overall quality of the audio picked up was pretty good, with my friend in Overwatch hearing me clearly. There is little free play even with the boom fully extended, which definitely instills some confidence in its durability.

For RM249, the Edifier G4 is a good option for gamers who want a USB headphone with vibration features. While Edifier usually opts for a no-frills approach, the Edifier G4 comes with its fair share of gimmicks like SingFX for the next Justin Bieber. The very apparent lack of bass with the vibration mode off is probably intentional to offer a clearer sound in gamers, but I really would not be playing games without some shaking explosions, which is conveniently also offered by the Edifier G4 once you turn on the vibration. Edifier could definitely do with a driver update to overcome the driver issues I faced, and hopefully add an option to still get bass in the output without the vibration too. Overall, I find the Edifier G4 deserving of a Bronze Pokdeward, held back by the simple fact that I can’t have bass without getting vibrated at the same time.

[UPDATE]: There is a new updated variant from Edifier Malaysia without the driver issues and also you will now be able to get bass without vibration.

Our thanks to Edifier Malaysia for the Edifier G4 in this review. 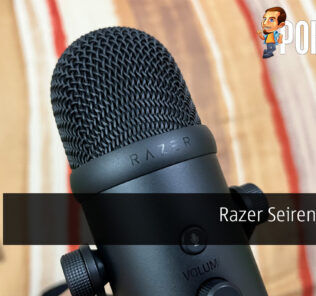 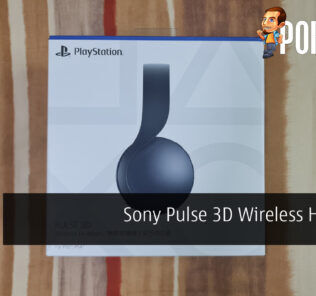