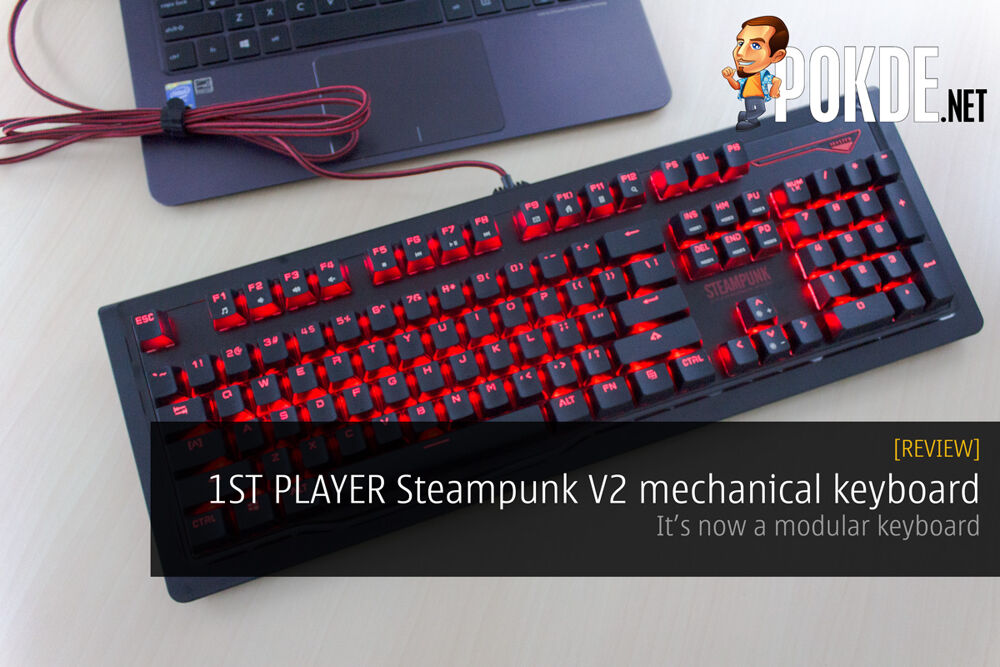 - Non-removable cable
- The twezeer is quite difficult to use, can easily scratch the keycap and the body itself

The new 1STPLAYER Steampunk V2 is a modular keyboard, a great idea allowing users to swap and try other switches without needing to buy a new keyboard or solder switches. 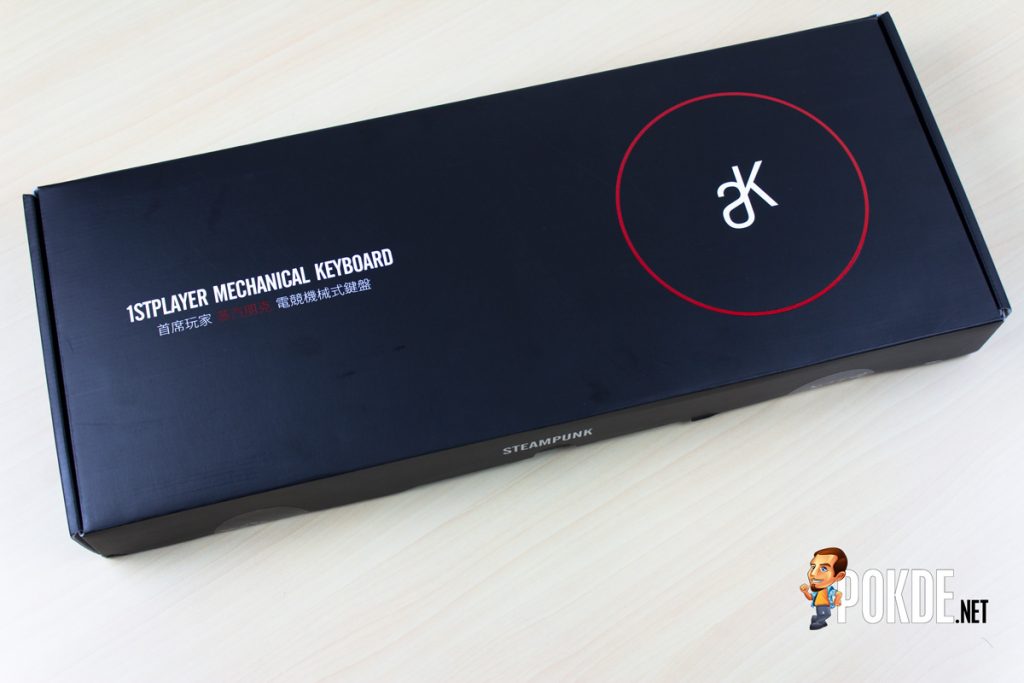 The Steampunk’s retail box is similar like the older version, minimalist design with the huge “ak” on the front. 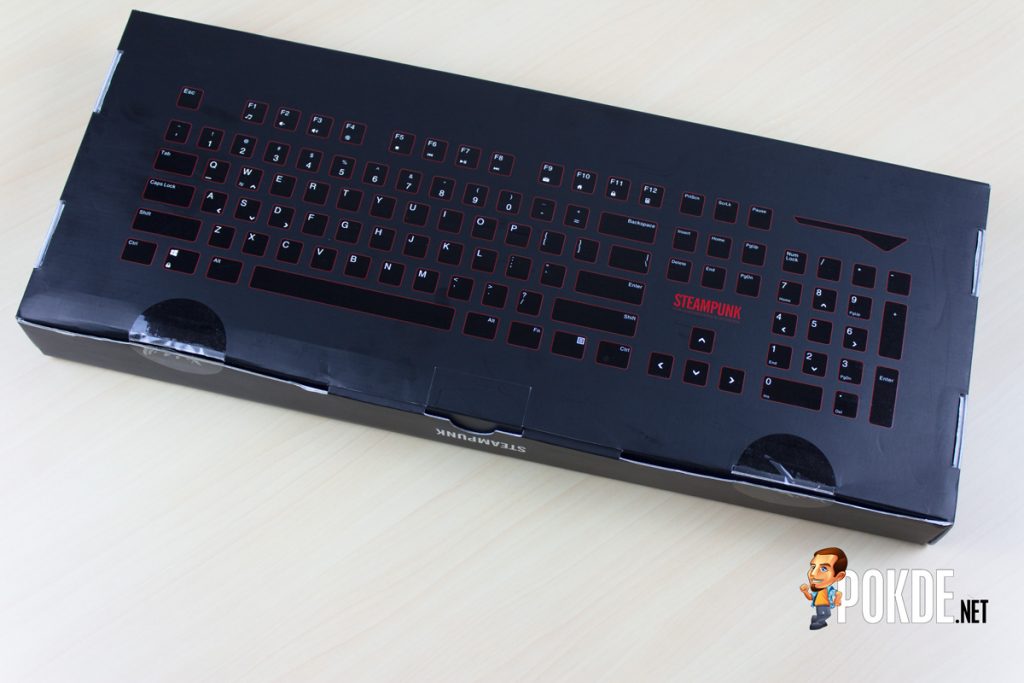 Same goes on the other side of box, nothing but the keyboard layout with spot UV coating. 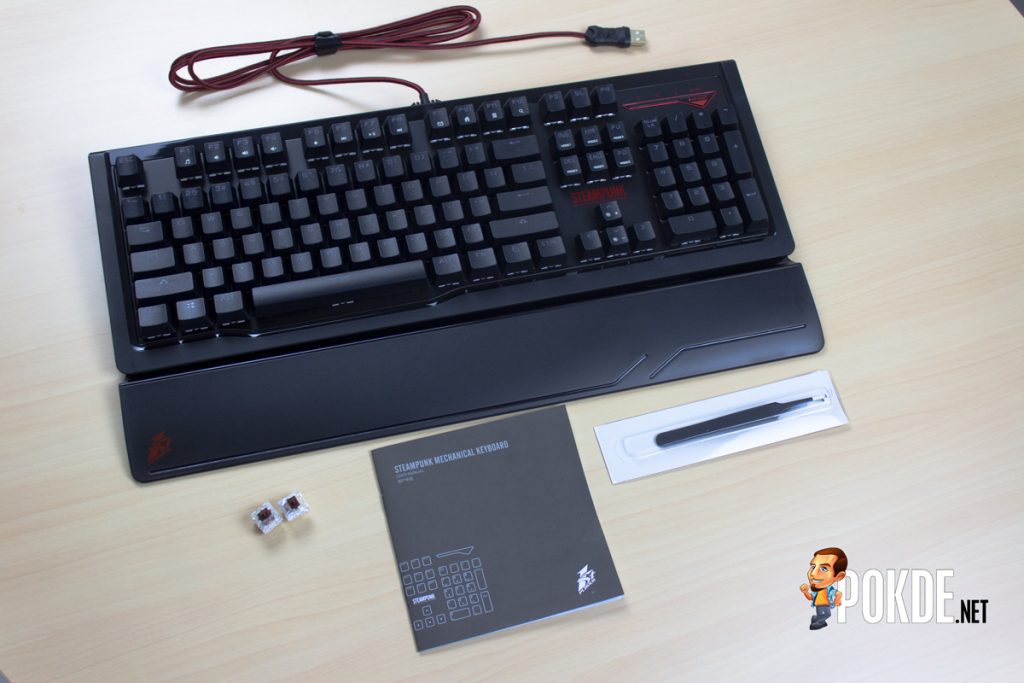 Inside the box, we have the 1STPLAYER Steampunk V2 itself, a magnetic palm rest, quick user guide, a tweezer and two extra brown Kailh switches. 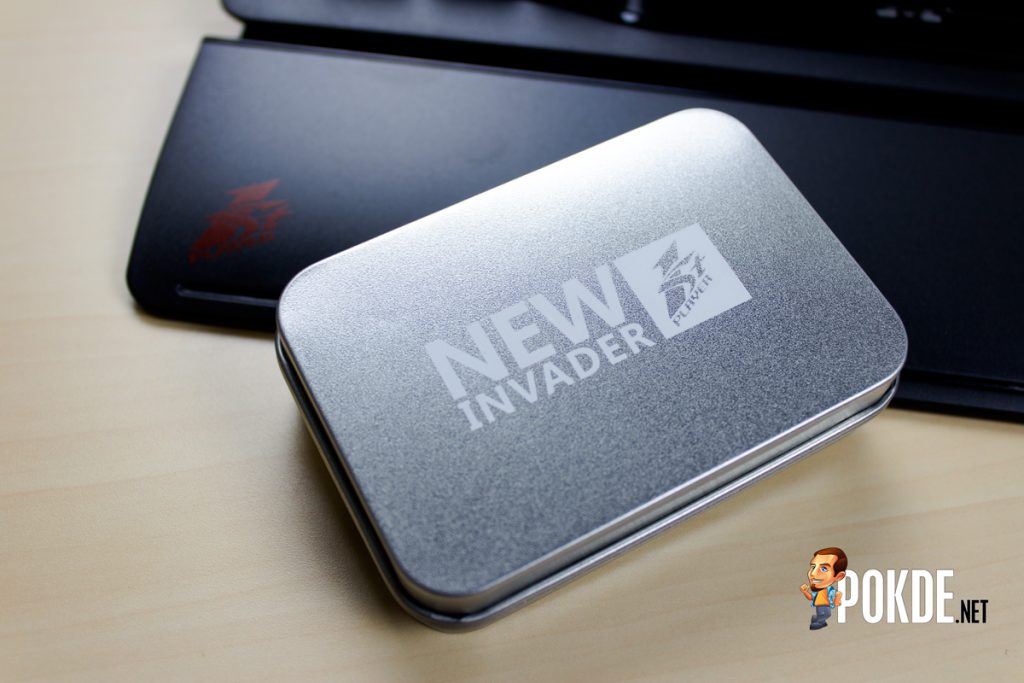 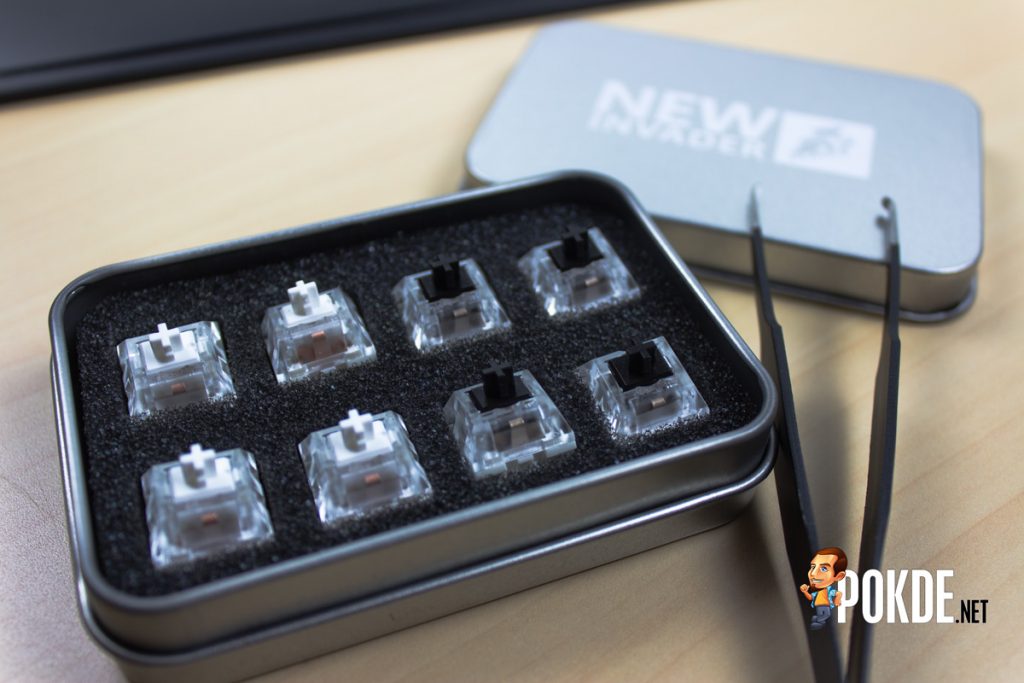 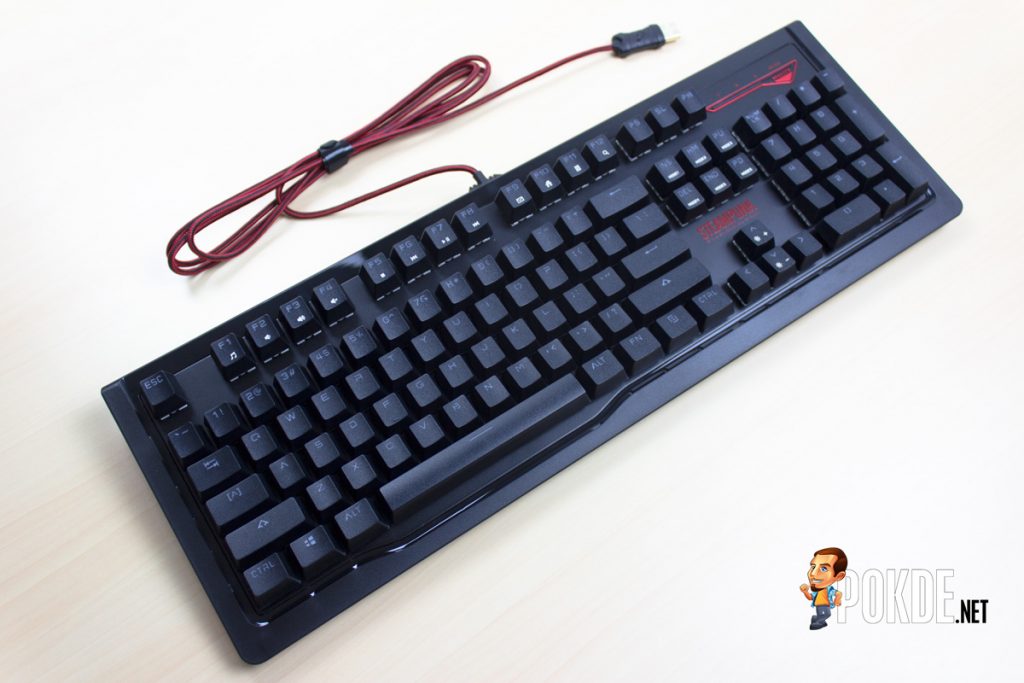 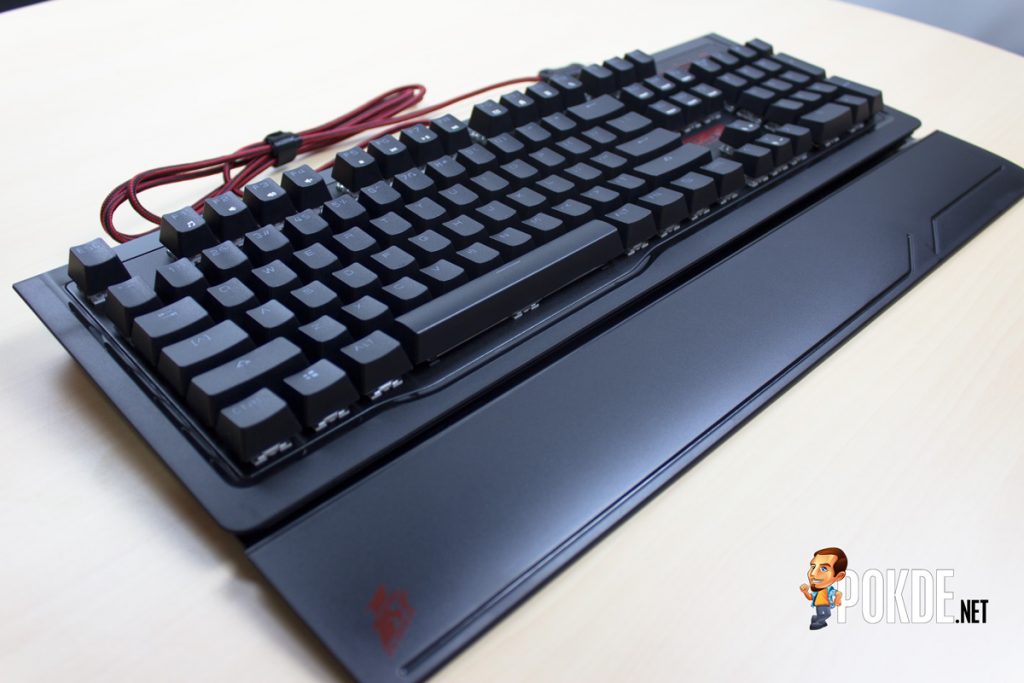 The new Steampunk V2 is actually a modular mechanical keyboard. This means that you can swap the switches easily, as the Steampunk V2 is also compatible with most mechanical switches from the likes of CHERRY, Kailh and Gateron. The keyboard still feel solid and pretty hefty too, something that was brought over from the first iteration. The palm rest is also easily removable if you want to, as it is held in place by magnets. 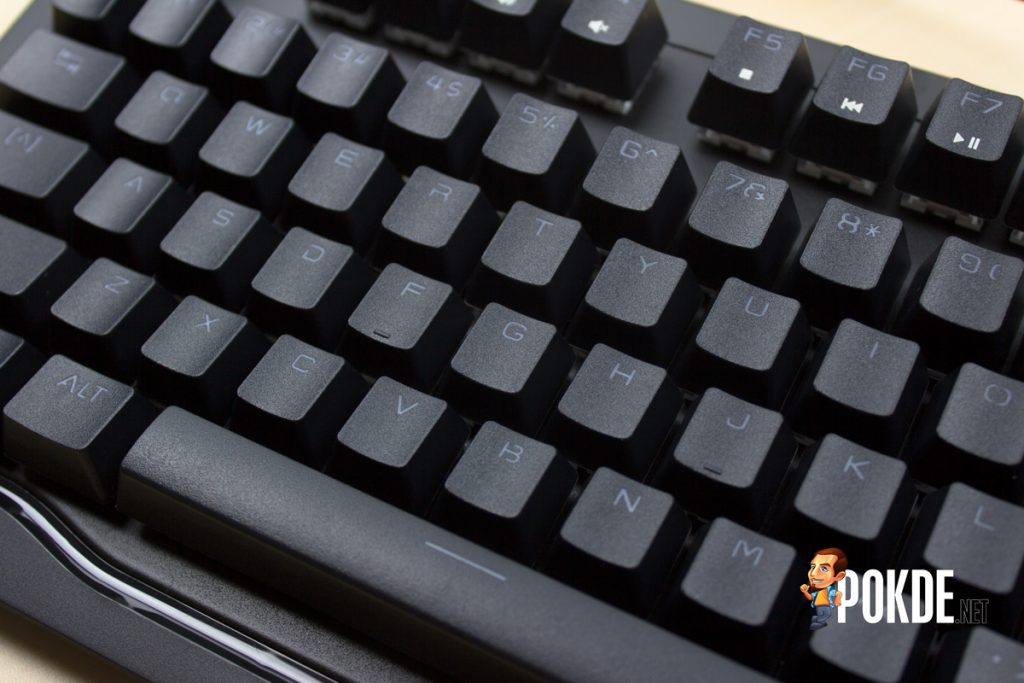 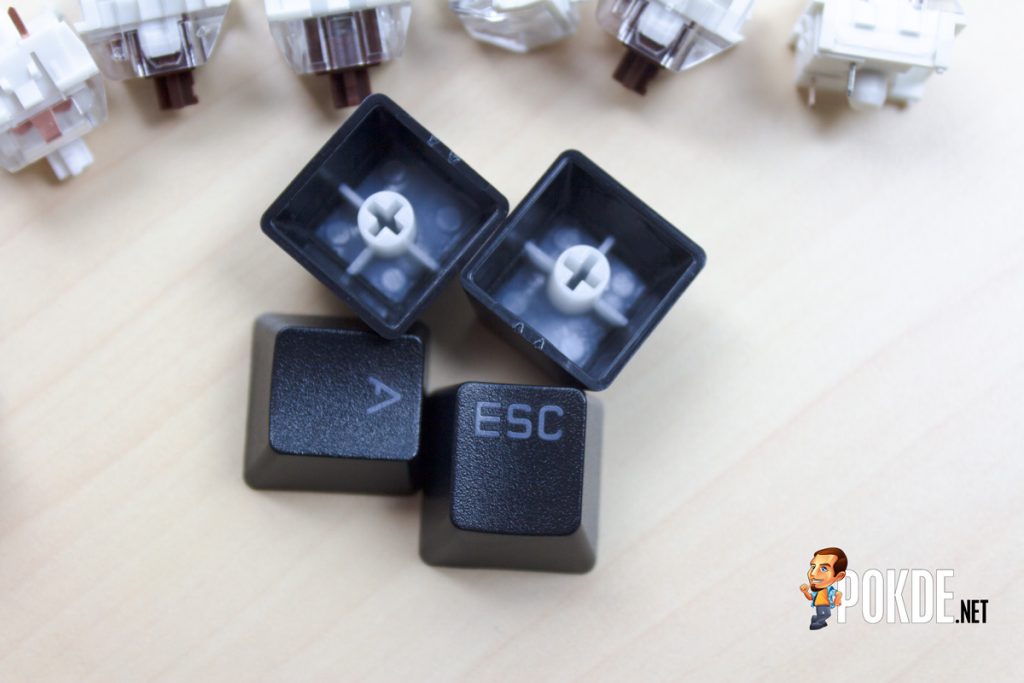 One noticeable change made on the keyboard are the legends on the keycaps. 1STPLAYER has updated them with newer and better looking ones. Personally, I prefer them a lot more compared to the ones on the original Steampunk. In term of material, the keycaps are ABS double-shot ones. 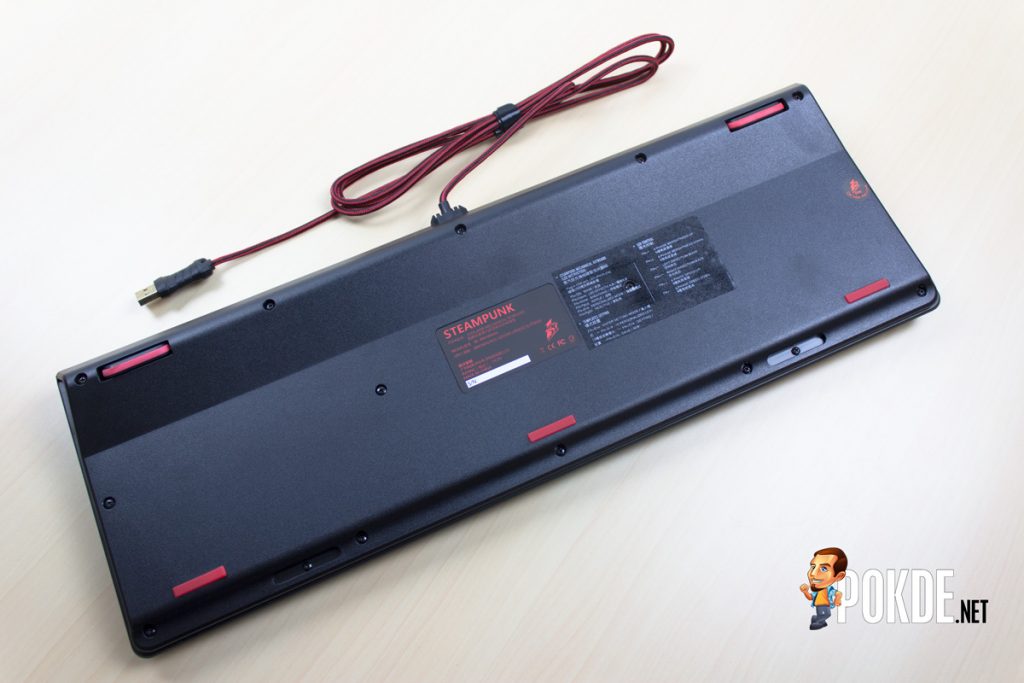 The Steampunk V2 still features the same arrangement of rubber feet to keep the keyboard firmly planted on your desk. I have tested first version, and it was indeed rock solid on my table. 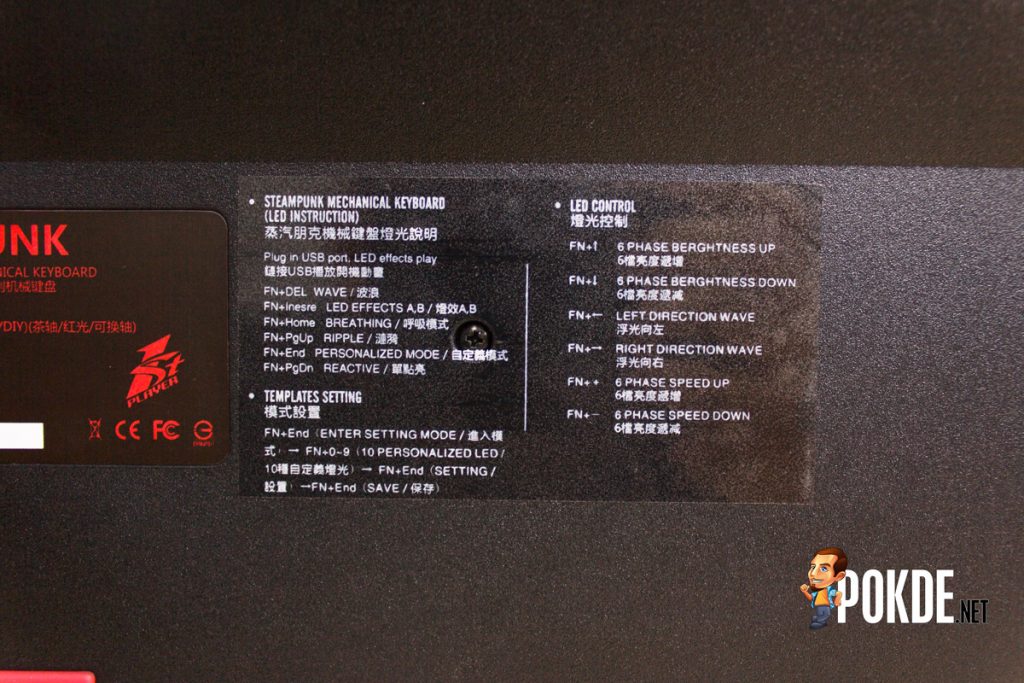 In addition, they now have a sticker for the LED controls. The Steampunk V2 doesn’t feature RGB, yet, so the controls are rather simple. 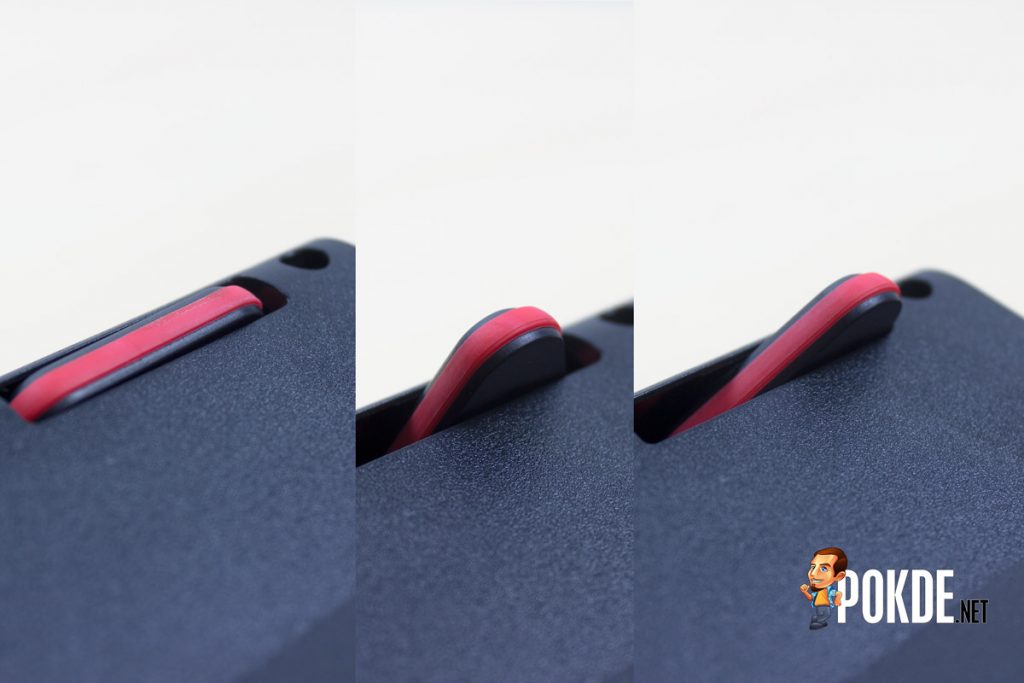 The keyboard feet are rotatable,  allowing you to pick from three levels of tilt, same as the previous model. I am still impressed by this unique design despite them being quite small. 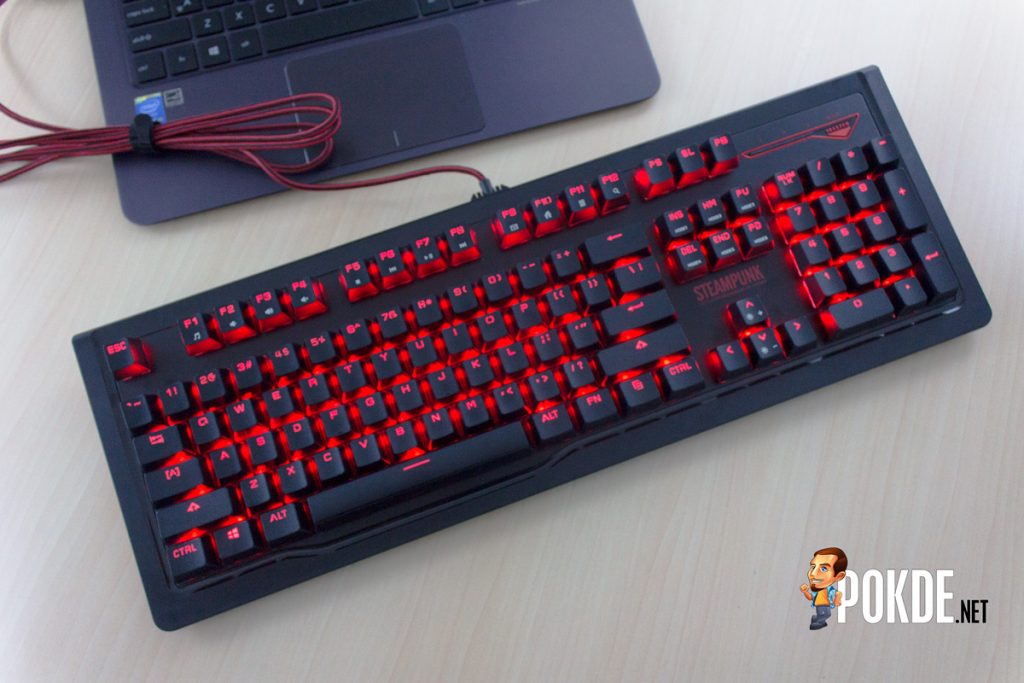 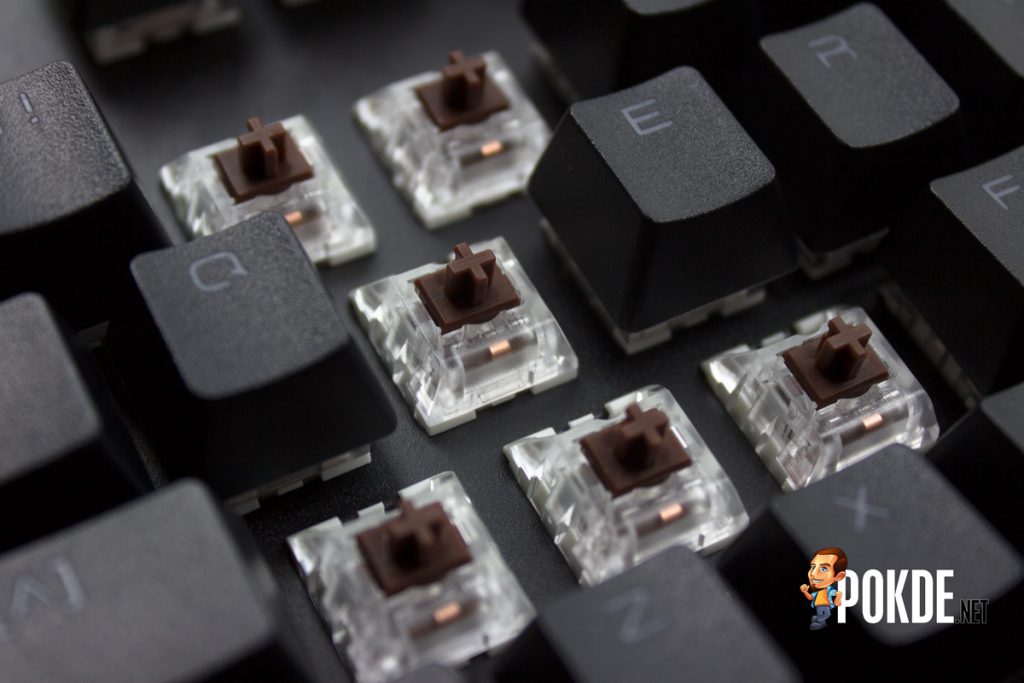 The 1STPLAYER STEAMPUNK V2 only comes with Kailh Brown switches, which I actually quite like. It actually feels pretty similar to CHERRY MX Brown switches, but the latter still offers a slightly better typing experience. 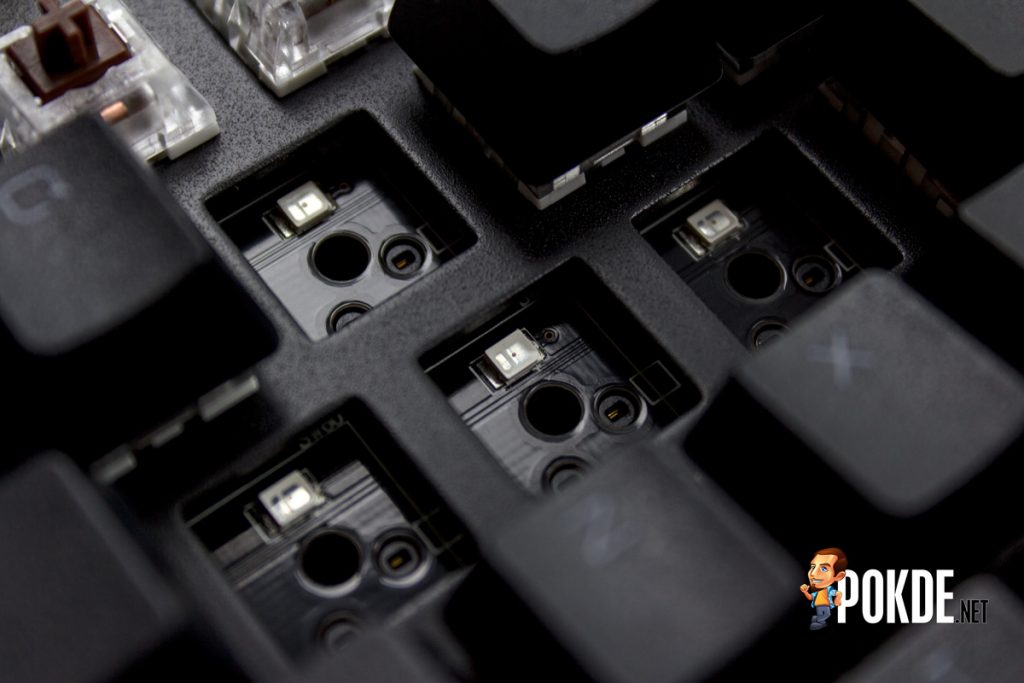 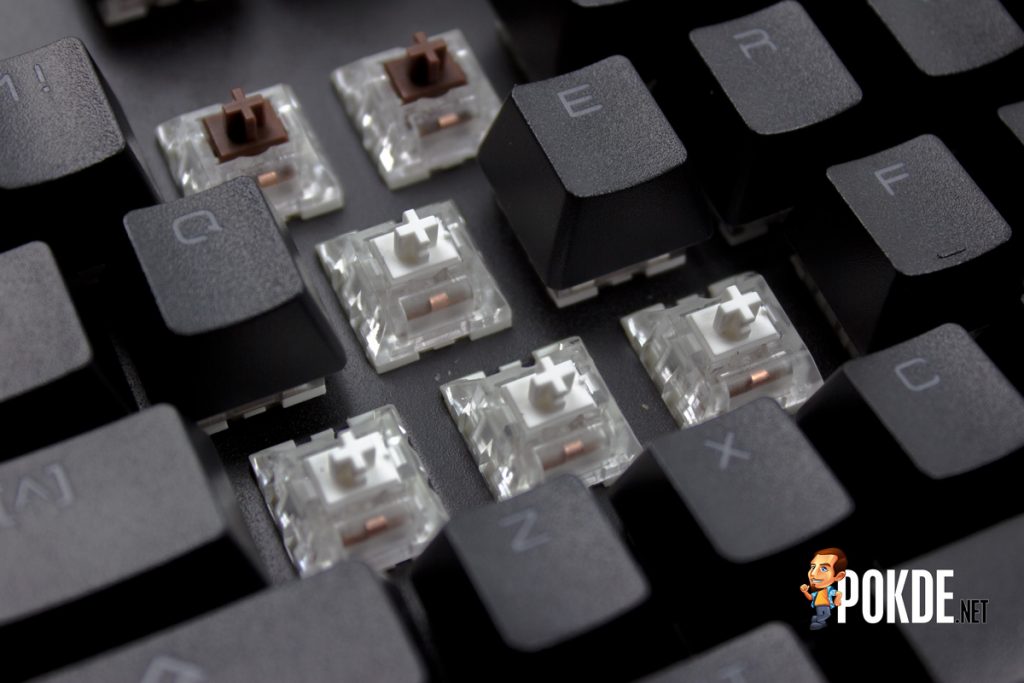 As I mentioned earlier, the 1STPLAYER STEAMPUNK V2 is a modular keyboard which allows you to swap switches. You can change it with any mechanical switches regardless of brand, like Gateron, CHERRY and Kailh. Removing the switches with the tweezer can be difficult but after several times, you should be quite adept with it. From the board, we can see that the 1STPLAYER STEAMPUNK V2 uses SMD LED for the lighting. So, for this review I put the Kailh White switches on the WASD cluster for the test. The Kailh White switch feels lighter and quieter compared to Kailh Blue switches. You can hear how clicky it’s in this video below.

The 1STPLAYER STEAMPUNK V2 has neither programmable keys and RGB lighting, so it’s okay to not have any companion software. For the lighting, 1STPLAYER has change the LEDs used in the first version to SMD LEDs in the Steampunk V2. This results in a brighter red backlighting for the keys. Switching between effects and customizations is easy as show in the video above. 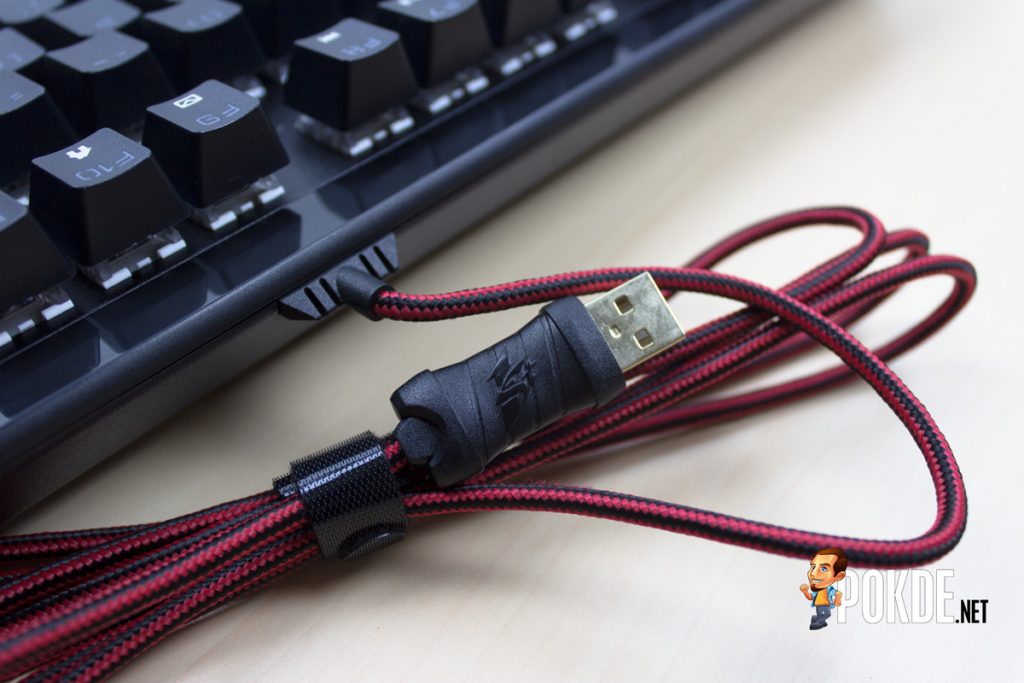 1STPLAYER’s efforts to make this a modular mechanical keyboard is commendable, but they might have left out a pretty basic detail. A removable USB cable. Or it can also be made that much better if we have a USB pass-through for the mouse. RGB lighting is pretty unnecessary but it will definitely look good with more bling. 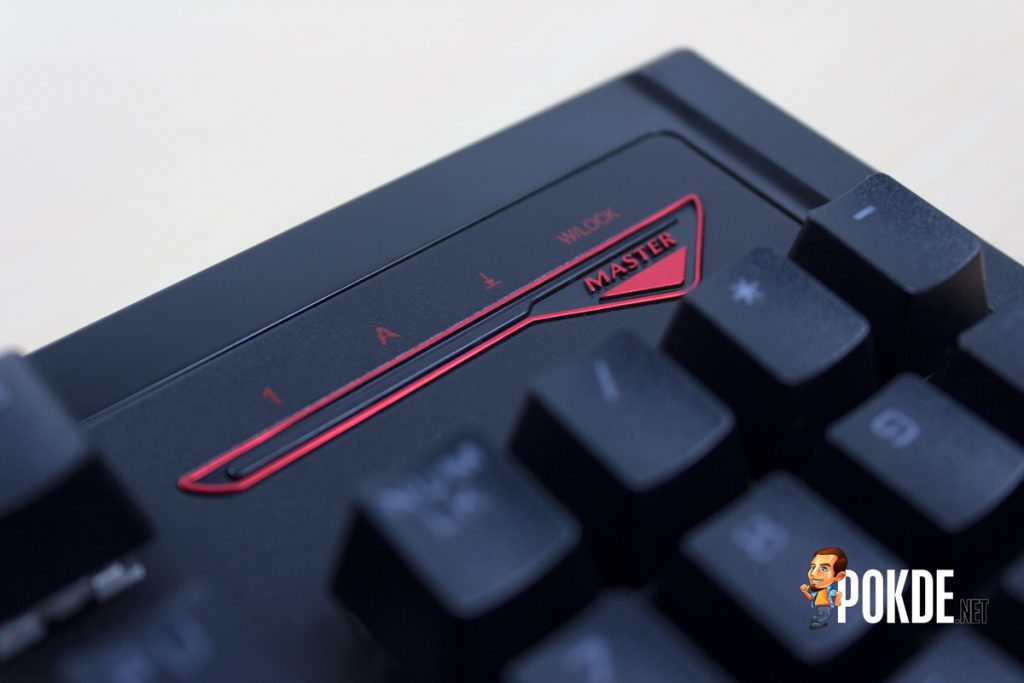 The only thing that has left me wondering is the “Master” at the top right of the keyboard. If it doesn’t have any meaning it could be better if 1STPLAYER replace it with another word that makes more sense such as its own branding, 1STPLAYER or Steampunk, and put it there.

Basically, the 1STPLAYER STEAMPUNK V2 is an upgraded version of the previous model with the swappable mechanical switches, better keycap legends and improved LED. It might not be for everyone who are looking for a new keyboard but I highly recommended the Steampunk V2 if you are looking to try another switch in the future. Without any soldering needed, you can easily replace new keyboard switches without needing to buy a new keyboard. All you need is to buy a new set switches and swap them in.

Personally, I believe the Steampunk V2 could have been made better with low profile keycaps. The 1STPLAYER STEAMPUNK V2 is priced at RM339. Inclusive of the 1STPLAYER New Invader switches, it’s quite an affordable keyboard and you do get your money’s worth with this keyboard. The keyboard has its own charm and feels solid, but yet again, it still has room for improvement. If 1STPLAYER going to bring Steampunk V3 in future, a removable cable is a must and RGB lighting could improve the appeal of the keyboard. I award the 1STPLAYER STEAMPUNK V2 with the Silver Pokdeward. 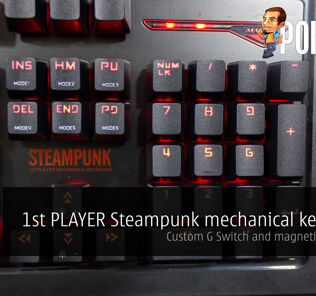 ASUS King of Mobile, in collaboration with Team Pokde.net
Next

This is the Weirdest and Most Brilliant Resident Evil VII: Biohazard Video Ever!
Latest Video
Read More
247